Do you enjoy woodworking? If so, you’re probably always on the hunt for the best woodworking tools. Biscuit joiners are relatively new and they’re super handy when it comes to joining wood together. 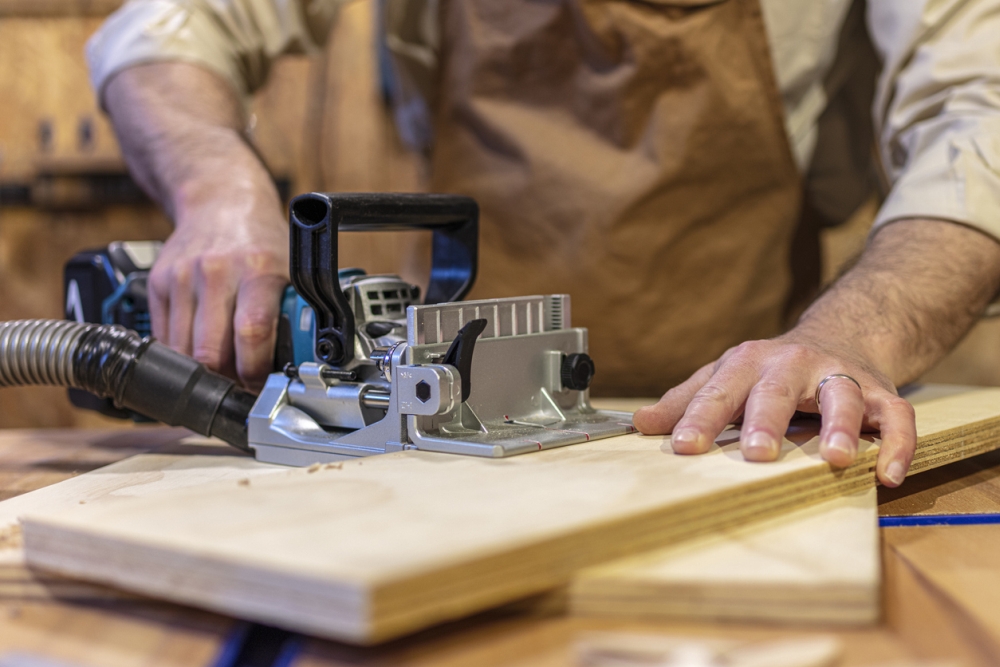 You’ve landed here because you probably do need a biscuit joiner for your next woodworking project. We have six mini-reviews of the best biscuit joiners on the market so that you can decide which one is the best for you. But if you still decide you want to do your own research on other products outside of our recommendations, we have created a guide to tell you which features to look for and more.

The PORTER-CABLE 557 is our top pick because it is great value for your money. It’s also accurate with cuts and more.

The DEWALT biscuit joiner can do flush cuts starting at 0 degrees and it has a dust collection port that we appreciate.

Vonhaus made it on this list because it has an ergonomic design and it’s also very easy to use making it a popular choice for new woodworkers.

What is a biscuit joiner?

A biscuit joiner is a woodworking tool that can align two pieces of wood together which creates a slot.

Do I really need a biscuit joiner?

Biscuit joiners are an important woodworking tool designed to make your life easier while trying to cut out perfect slots from wood. You can probably make accurate cuts without a biscuit joiner, but it does help speed things up. Also, some of them have a dust collection so that things don’t get dusty as well.

What to look for in a biscuit joiner

This is important in biscuit joiners because you’ll need to know if you are going to be near an outlet the whole time or you can move around a bit. There are corded and cordless options that you can consider. The corded version, while you are tethered, you’ll be able to work longer as you don’t have to recharge the battery. The cordless version, while it won’t last as long due to the battery, will allow you to move around if you need to.

Most people don’t think about this, but the way you hold the biscuit joiner actually matters due to comfort. Biscuit joiners have two different handle sizes: a barrel grip and D handle. Most users prefer the barrel grip because it’s easier to get a grip on and there’s more control when cutting.

Knowing how the fence works on a biscuit joiner is very important. You’ll want to look for a biscuit joiner where you can easily adjust the angle. Most angles are usually between 45 and 135 degrees on these tools, so you should look for that.

You will also want to look for a tool where you can raise or lower it while it’s parallel to the blade. Look for a biscuit joiner that has a rack and pinion mechanism adjustment and locking knobs to make things go smoothly.

This is actually pretty important when considering which biscuit joiner to get. Most standard blades are about 4 inches so that means you can at least cut standard slots. However, you’ll want to find tools where you can switch blades if you need to. If you need to use a smaller blade such as a 2 inch, you can so that you can make smaller cuts as needed.

DeWalt has been one of the leading tool manufacturers since its founding in 1924 in Leola, Pennsylvania. They’re a Black & Decker subsidiary, but you know everything they sell is high-quality and moderately priced.

Makita was founded in 1915 so they’ve been around for over 100 years. Ever since then, they’ve been innovating with their own products for years, becoming one of the leading companies in the world to sell high quality tools. They sold their first power tool in 1958 and in 2015 they became the world’s industry leaders in tools.

Ryobi was founded in 1943 but the production of tools really started in 1968. Today they are one of the leading tools companies in the world. In the US, the headquarters are located in Indiana. Their tools are one of the most recognizable tools in the world and they’re made with innovation and high quality.

Porter-Cable was founded in 1906 and by 1910 they’ve made their first pencil sharpeners. By 1987 the first plate joiner made by them was available in North America. Today they are one of the leading companies in the world that makes high-quality tools that every handyman or professional can use.

Vonhaus is known for their high-quality products that they sell across the world. They always make sure that they keep what the customer wants in mind, making each item customized to them. They are a leading DIY company that sells tools as well as other products to consumers who appreciate them.

AOBEN sells high-quality items within their brand. They were founded in 2017 so they are relatively new. You can find some of their products online.

Best Biscuit Joiners To Buy In 2021

We’re starting off with Dewalt because they’re a super popular brand that sells high-quality tools worldwide. The Dewalt 6.5 Amp Plate Joiner is perfect if you need it for your job or other workplace settings. This joiner has a 10,000 RPM motor and weighs 9.86 pounds. It is made almost entirely out of metal & cast magnesium with the exception of the rear grip and the cover of the motor.

As far as the fence mechanism, it features two racks and a single pinion. This means that the fence can be adjusted easily making sure that that the fence is parallel to the blade no matter what. Here are other features that the Dewalt DW682K have:

If you’re worried about dust, you’ll be happy to know that you won’t be covered in dust with this biscuit joiner. It has a fully covered blade and a dust collector. The dust collector is on the side of the joiner.

Anyone who wants a biscuit joiner that’s durable and reliable. It’s also for people who don’t want dust all over them.

The Makita PJ7000 is another powerful biscuit joiner to consider. It has 5.6 amps and it’s very comfortable to hold in your hands as it weighs just 5.5 pounds. The entire body is made out of high-quality material so that it’s ultra-durable. As far as the fence system, the joiner has two parts: the fence and the removable angle guide.

What’s great about this tool is that it can be adjusted so that you can use the typical biscuits (#0, #10, and #20) but you can use the max cutting depth allowed which is ¾ inches. The motor is 11,000 RPM and it is corded so you’ll need to plug it in an outlet nearby.

The Makita comes with these key features:

Anyone who wants a reliable tool that can make precise cuts that isn’t noisy.

The Ryobi JM83K Biscuit Joiner is a tool that you’ll want to consider. It’s unique because it can cut half football shapes on the material. It’s also unique because it looks different than most biscuit joiners as its ergonomic handle really does look like one. It weighs just 9.98 pounds so it’s lightweight enough to do longer cuts all day if you need to. The 11,000 RPM motor is arranged vertically, and it has positive stops while cutting angles at 0, 45, 90 and 135 degrees. Overall, it’s a great biscuit joiner that would be good for your next woodworking project.

Anyone who wants a comfortable biscuit joiner that’s easier to use and easier to hold than others.

If you want something that will make it worth buying, you’ll want to seriously consider the Porter Cable 557. Everything about this biscuit joiner’s construction is made from high quality durable metal so it will literally virtually never break. It weighs 10.23 pounds so it’s relatively lightweight. Because of the metal structure, you will be able to work while your tool is secure making it very safe to handle/cut with. A feature that we love about this biscuit joiner is that it has a dust port, so you won’t be getting dust all over you while cutting.

With the fence, the fence assembly positions the blade right over the spot where you want to cut out. It has a spring-loaded motor assembly that will push the cut and the spring assembly will go back to its original position. There’s a clear plastic plate that comes with this biscuit joiner so if you need to expand the surface, you can use the plastic plate for it.

Here are some of the most notable key features:

Anyone who wants a biscuit joiner that has everything they need for the best value of their money.

The VonHaus Biscuit Joiner is another one to consider. Weighing in at 8.23 pounds, it’s a comfortable tool you can have in your hands all day. It has an 8.5 Amp motor, which to us is powerful enough to make those important accurate cuts. The VonHaus biscuit joiner also has the following key features:

Anyone who is looking for a biscuit joiner that makes accurate cuts. Perfect for professionals.

Finally, we have the AOBEN Biscuit Joiner that we think is worth considering. Made out of high-quality plastic and weighing in at 10.93 pounds, it is very durable. As far as holding it, there’s an anti-slip handle that is easy to grip and hold on to for a long period of time. It also has a 4” diameter and a 11,000 RPM so you know that this biscuit joiner won’t let you down. One of the best features we love about AUBIN is the fact that it can make joints in minutes. It can handle joints such as corner joints, mitre joints, frame joints and more.

Here are other notable key features about AOBEN biscuit joiner:

Anyone who wants a reliable biscuit joiner that can create joints in minutes. Great for independent contractors or people on a time constraint.

Are biscuit joiners worth it?

They are worth it because it makes aligning two pieces of wood much easier. It’ll take the guesswork out of a lot of things.

What are biscuit joiners used for?

They are used for aligning wood and making shapes that you need out of wood. For example it can be circular or half circles.

What can I use instead of a biscuit joiner?

You can use a dowel, but it is slightly trickier to use than a biscuit joiner.

What are the disadvantages of a biscuit joiner?

Sometimes they don’t make ultra-accurate cuts that you need them to make. Sometimes, even parallel cuts are hard to get.

In this guide, we have reviewed the six best biscuit joiners that we think is the best on the market today. If you really want to know which one is our favorite, we recommend the Porter Cable 557 biscuit joiner. It’s best for home projects and it comes with some accessories that you may need to use. Which biscuit joiner do you think is the best? Feel free to let us know in the comments if you like!