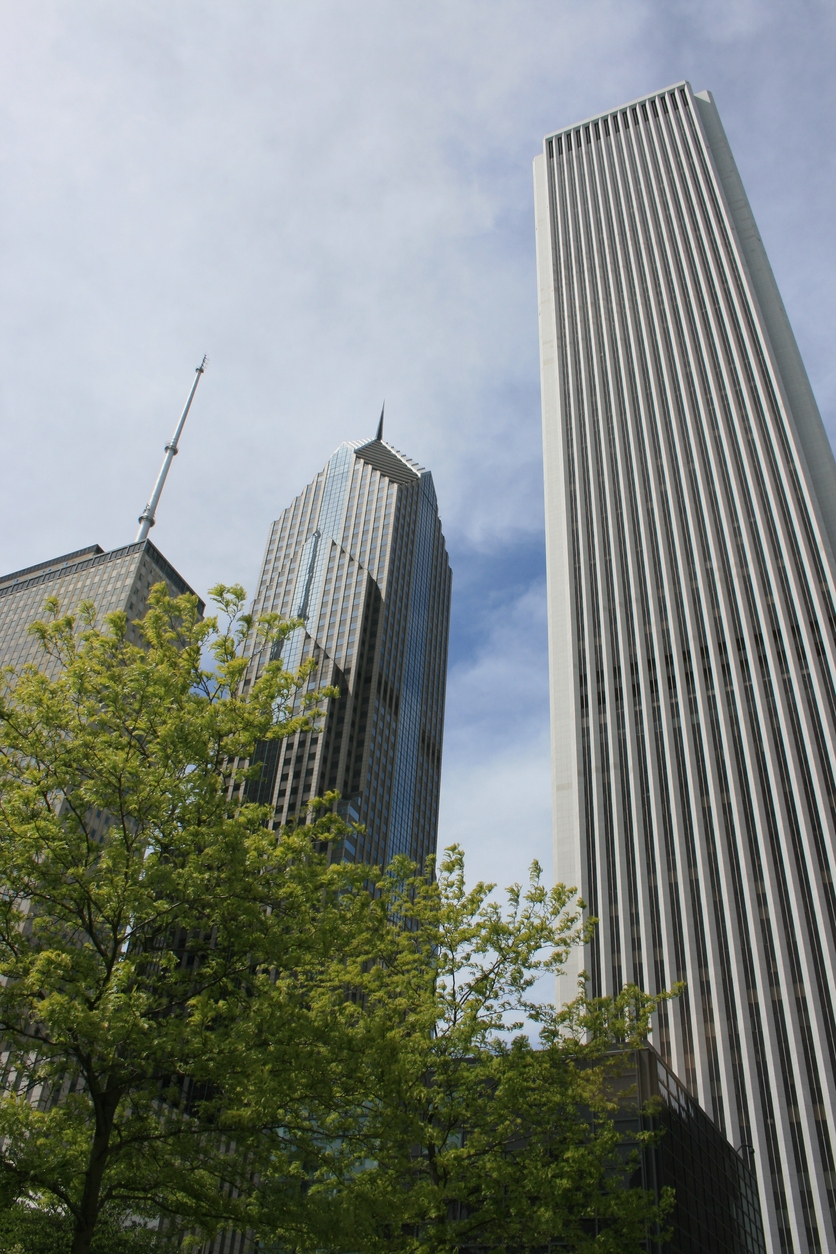 Aon Center Chicago is one of the biggest buildings in the city’s skyline. The white rectangular tower is the 12th tallest building in the US. It’s overlooked because of Willis Tower, but it’s a key structure in the Windy City.

Aon Center is 1,136 feet tall, making it the fourth tallest building in Chicago. It has 83 floors constructed with a tubular steel-frame structure. It also has 50 elevators.

Construction finished in 1973, and at the time, it was Chicago’s tallest building. Sears Tower, now known as Willis Tower, surpassed it the following year. Today, Trump International Hotel & Tower and St Regis Chicago are also taller than it.

The white columns on the building’s exterior were built with Carrara marble (the same Italian quarry used by Michaelangelo for his masterpiece “David.”) for appearance, but the material didn’t hold up against Chicago’s weather. Cracks appeared in the early 1990s, so Aon Center was refaced using strong granite.

When the Aon Center in Chicago first opened, it was called the Standard Oil Building after one of the businesses inside. It was built to replace the former headquarters of the Standard Oil Company of Indiana.

Standard Oil Company changed its name to Amoco in 1985, so the building was renamed Amoco Building shortly after.

Recently, the top of Aon building has been lit with exterior lights to celebrate holidays and events. It has orange lights near Thanksgiving, green and red around Christmas, blue and orange to celebrate the Bears, and pink during Breast Cancer Awareness Month.

These colors often match other iconic buildings in Chicago, such as Willis Tower and John Hancock Building.

There are plans for a public observation deck thrill ride called “Sky Summit” on top of Aon Center. The ride features a rectangular glass box that lifts guests above the city.

Plans for the observation deck were announced in 2018 with a completion date in 2022. After the COVID-19 pandemic hit, plans were postponed for at least one year.

There are only 1.1 miles between the two, and it takes 8 minutes to drive there or 25 minutes to walk. Willis Tower was built one year after Aon Center, stealing its title for Chicago’s tallest structure.

Willis Tower has a Skydeck featuring glass boxes you can walk on. Willis Tower Skydeck is 1,353 feet high, and it’s higher than the future Aon Center observation deck.

What Businesses are in the Aon Center?

Is the Aon Center Open to the Public?

Anyone can access the lobby, but an authorized key card is needed to reach the businesses’ floors. When the observation deck opens, it will be accessible to visitors.

How Much Did the Aon Center Cost?

It cost $120 million to build Aon Center, which was under construction from 1970 to 1973. The observation deck thrill ride is expected to cost $185 million.

How Many Floors of Aon Center Does Aon Occupy?

Aon Corporation occupies 12 floors of the Aon Tower. They currently have office spaces on floors 3 through 15.

Aon Center Chicago was once the tallest building in the city, but now Willis Tower surpassed it. It’s still a sight to see because it’s the fourth tallest in Chicago and the 12th tallest in the world.

The building has gone through several name changes since it was built, but now the name Aon has stuck. More changes are just around the corner as plans for the thrill ride observation deck continue.