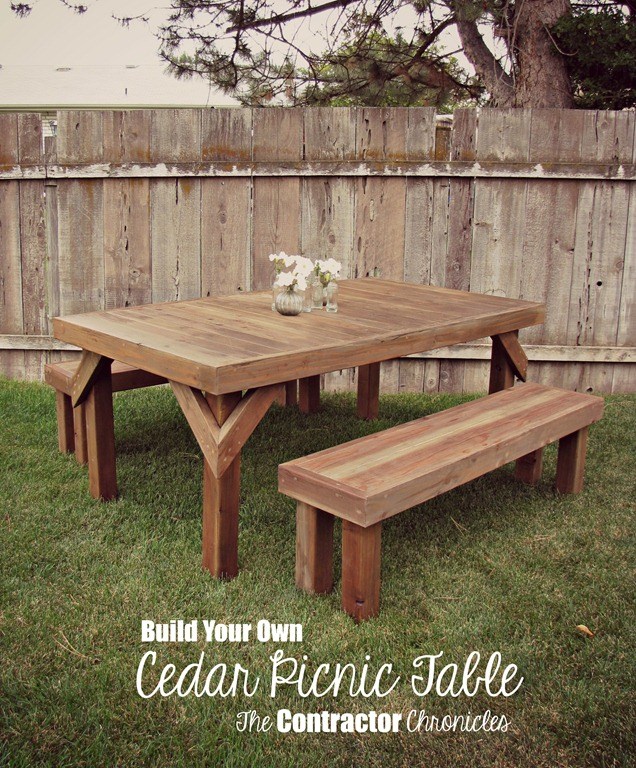 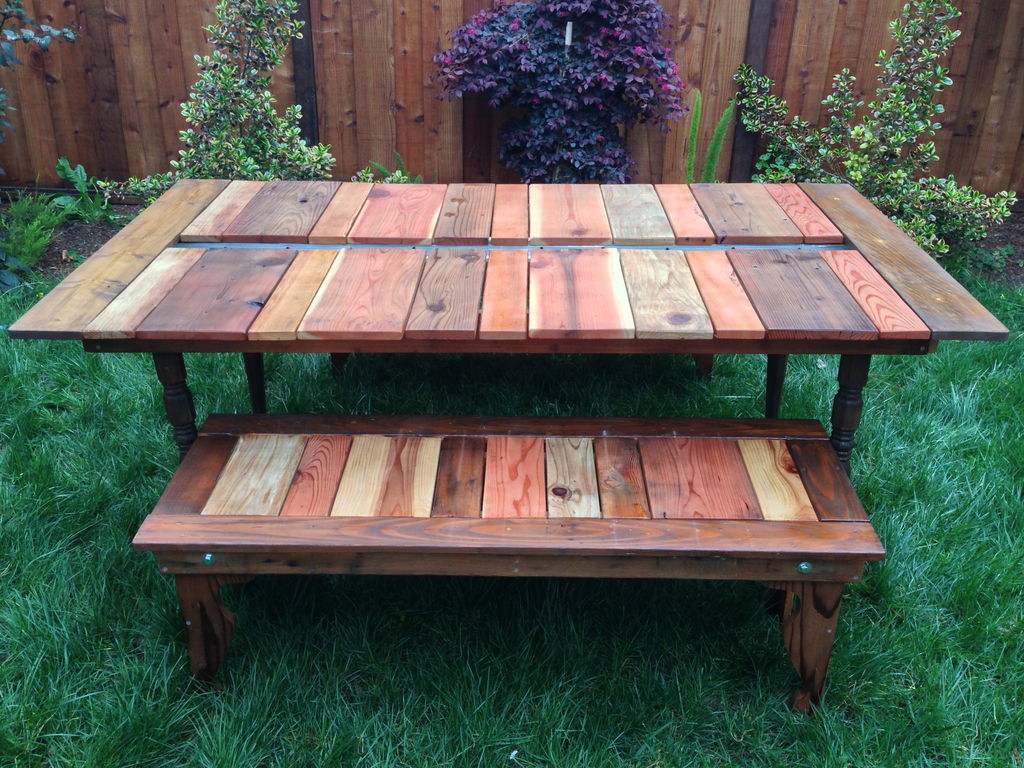 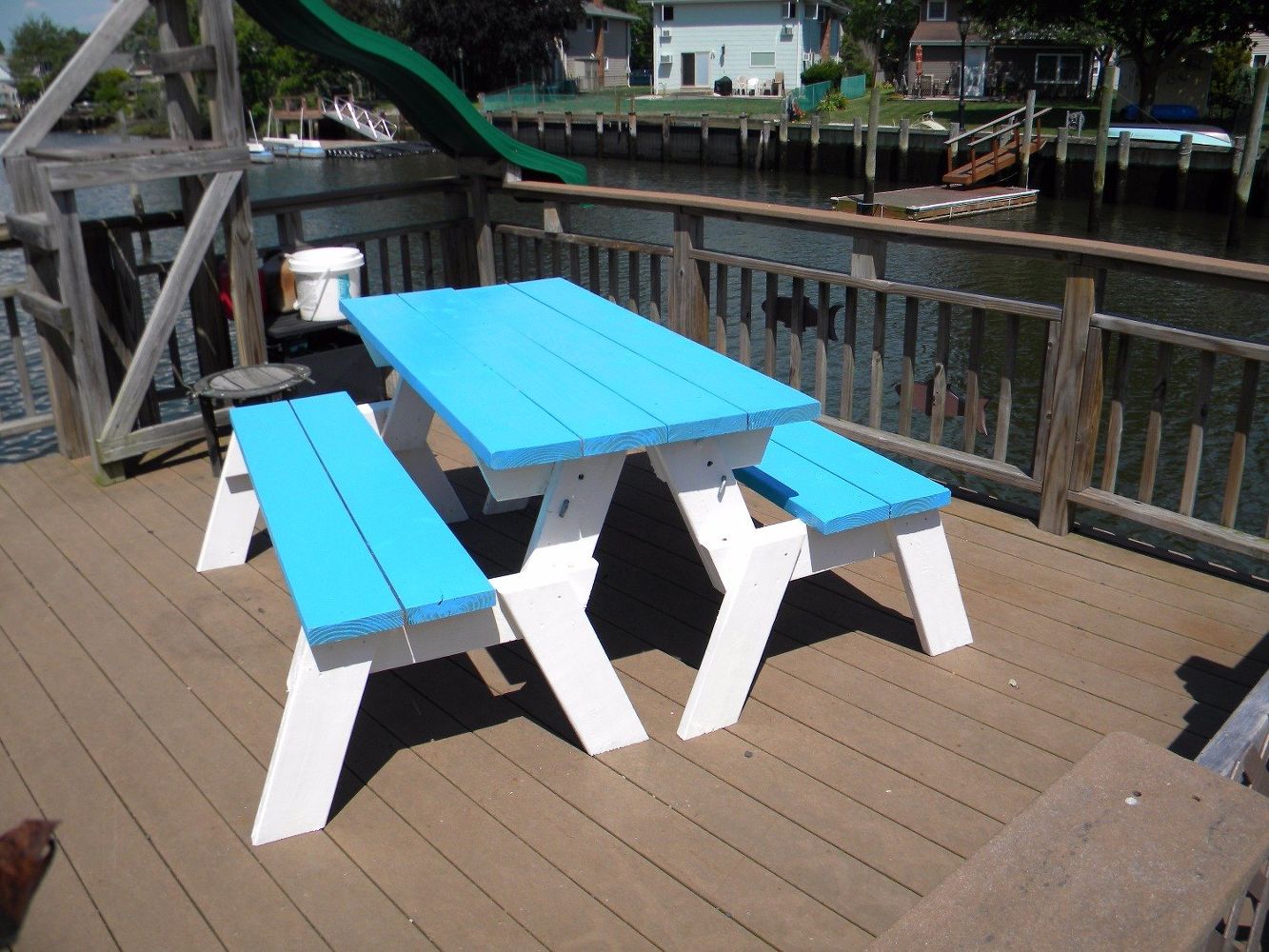 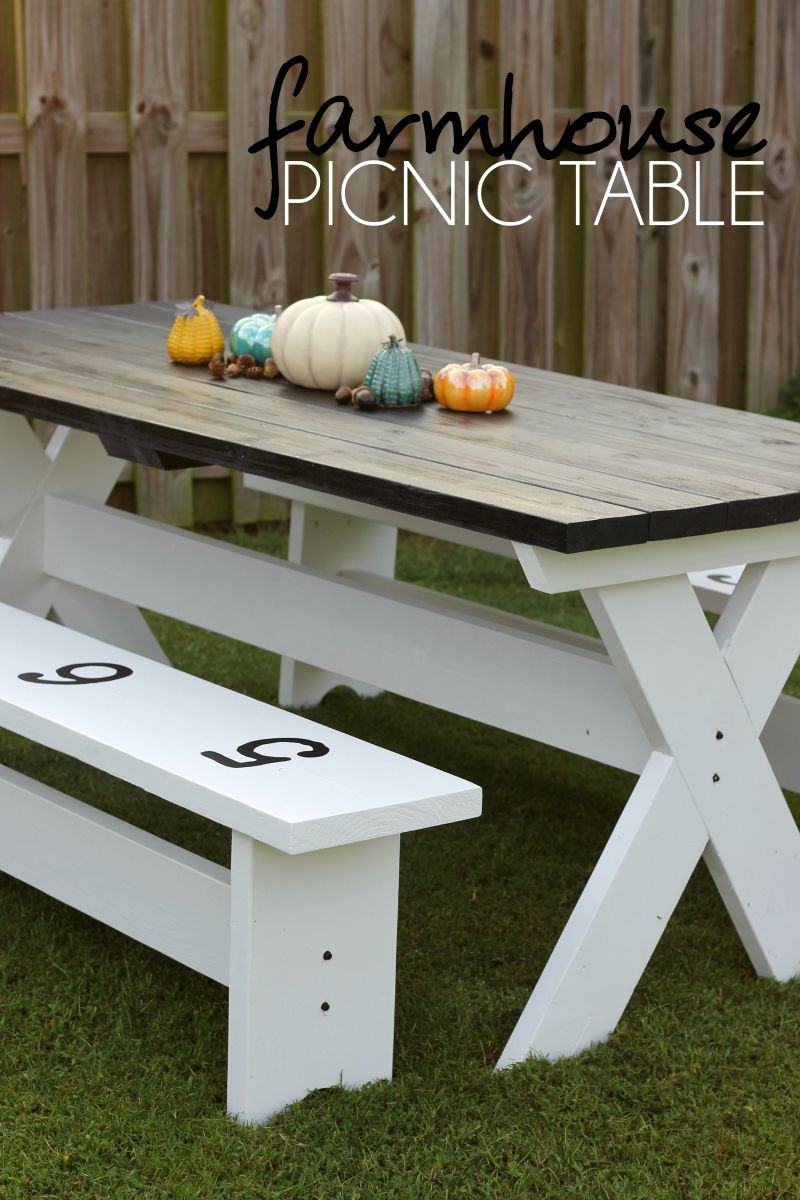 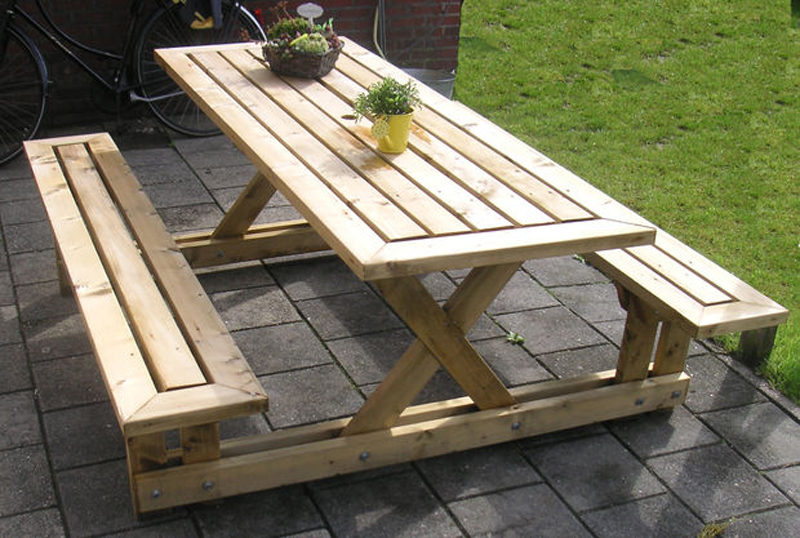 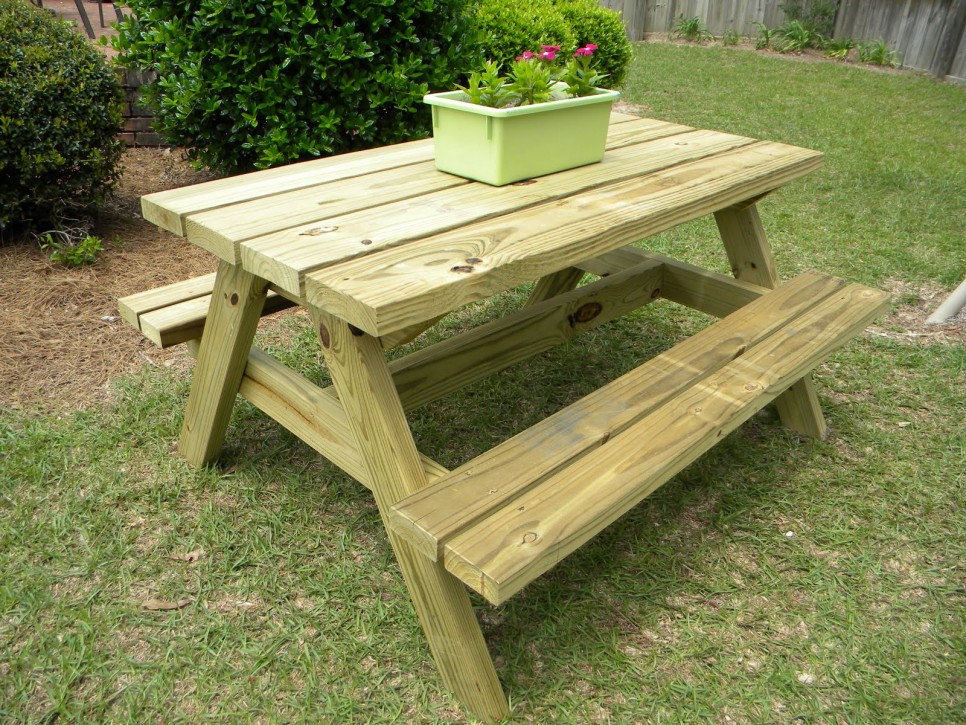 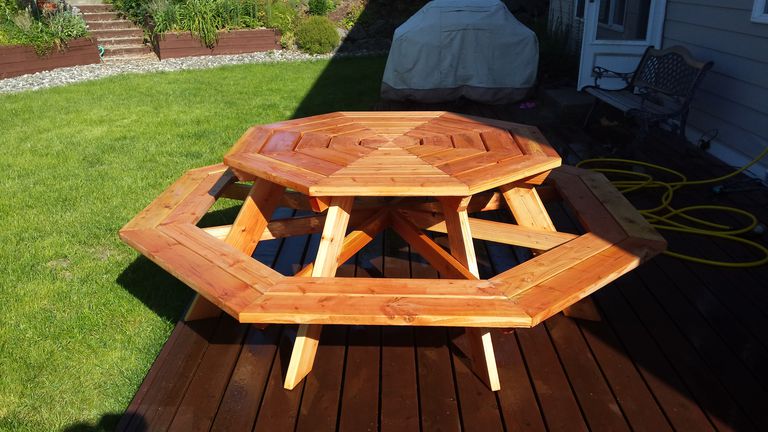 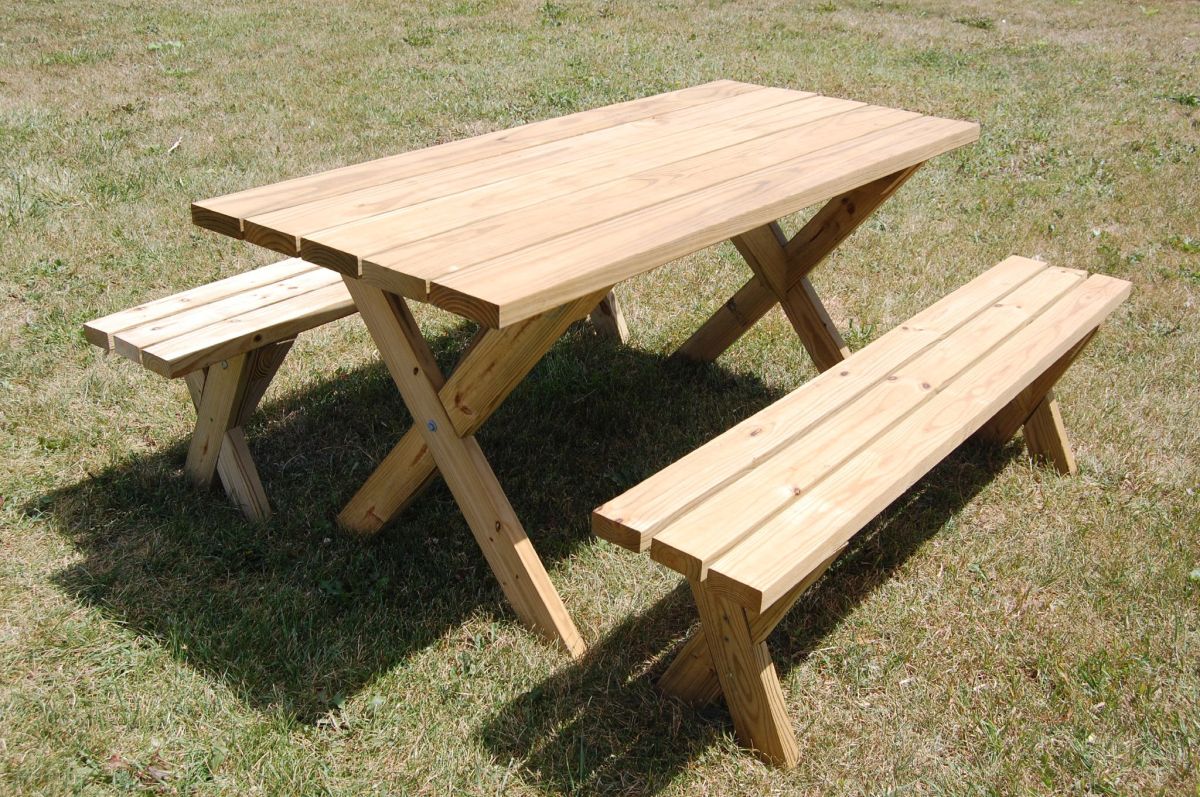 When’s the last time you had a picnic? It’s not a very common activity these days but it surely sounds cute. A picnic is more or less a barbecue which means it’s often organized in someone’s backyard. You can, of course, plan a picnic in a park or some other location and that can be a lot of fun too although it would usually mean there’d be no furniture unless there’s a compact picnic table you can pack and take with you. Today we chose to share with you a bunch of picnic table plans that we find inspiring for several reasons. They may not be portable but they’d surely look great in a backyard.

A picnic table is quite similar to a farmhouse dining table. That being said, the plans for it are pretty straight-forward. We recommend that you also build two matching benches so you don’t have to bring out a bunch of chairs every time you have a yard picnic. You can find a nice tutorial for such a set on Diydiva. The supplies needed include lumber and a few tools such as a saw, a drill, clamps and probably some screws as well.

Not a fan of rectangular picnic tables? We can understand that so we also prepared some plans for an octagon-shaped table. We found these on Ana-white. Compared to other projects, this one is a bit more complicated and still it’s pretty simple so don’t feel intimidated by it. If you follow the instructions and you pay attention to the details you can definitely pull this off.

The picnic table plans shared on Bobplans suggest a design that incorporates two benches which are directly attached to the table instead of being standalone pieces. In a way that makes this combo practical but it does also means there’s no flexibility and no way of repositioning the benches if desired. In any case, check out the details of this project and decide whether it’s a good fit for you or not.

A similar combination is also what the plans on Theownerbuildernetwork suggest. Check out the details as well as some of the design variations proposed here and you’ll see that this is a highly customizable project which can be adapted in many ways in order to suit your particular needs and preferences. Personally I think the benches are too far away from the table in this particular case so I would move them a bit closer.

There’s really no sense in overcomplicating the design of a picnic table. Simplicity is practical and a design like the one shown on Lifestorage is easy to put together from every point of view. The first step of this project is to build the top of the table and then to stain it. After that, the table legs are made and attached to the top. With this, the table is complete and all that’s left to do is build the benches.

We’re now entering a new category, that of hybrid designs and we’re starting with this cool picnic table which can be converted into a bench seat. It’s a really practical idea. You can use this combo as a table with benches when you’re having a picnic or when you actually need a table outside and when you’re done with it you can turn it into a comfortable bench so you can relax in it. The idea comes from Hometalk.

This picnic table featured on Instructables is also a hybrid but of a different kind. The special thing about it is that built-in planter at the center of the top. It’s a really cute idea that’s perfect for an outdoor table. You could plant some grass in there or you can make a mixture of cute little succulents. Check out the picnic table plans for details.

Now let’s get back to convertible picnic tables because we really loved this idea. Have a look at the plans shared on hertoolbelt to find out how to make a picnic table that can convert into not one but two comfortable benches with backrests. It’s one of the most amazing and inspiring things we’ve seen in a while. Basically the table splits in two at the center and each half becomes a backrest for one of the benches.

A similar idea is featured on Instructables except that this picnic table only has one bench. If you want you can add a second standalone bench on the other side but it wouldn’t have anything to do with this piece when the conversion is done.

The last project we want to share with you comes from Thecontractorchronicles and is a simple set formed of a table and two benches. They’re all individual pieces and the benches are designed to fit under the table when they’re not used. Have a look at the plans and the tutorial to find out more about this charming combo.