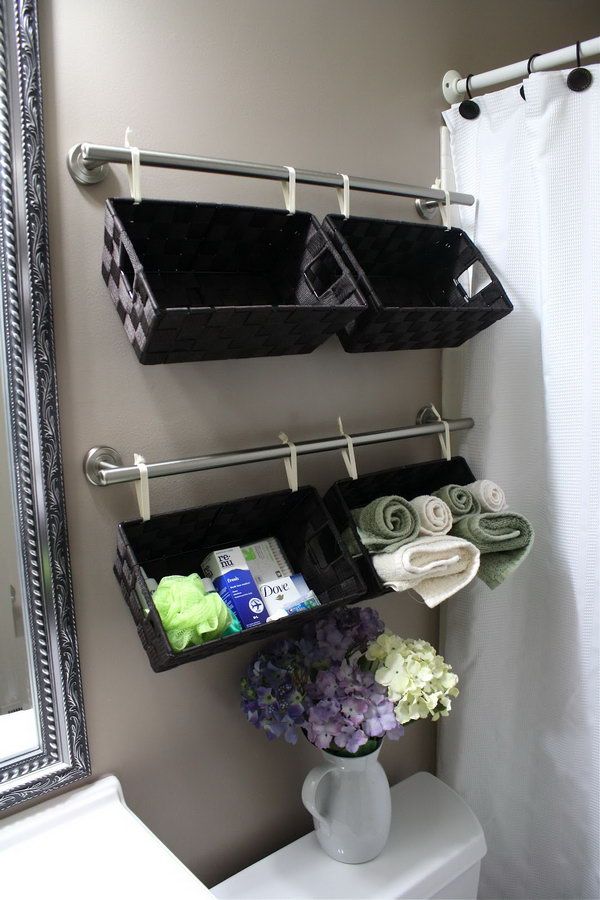 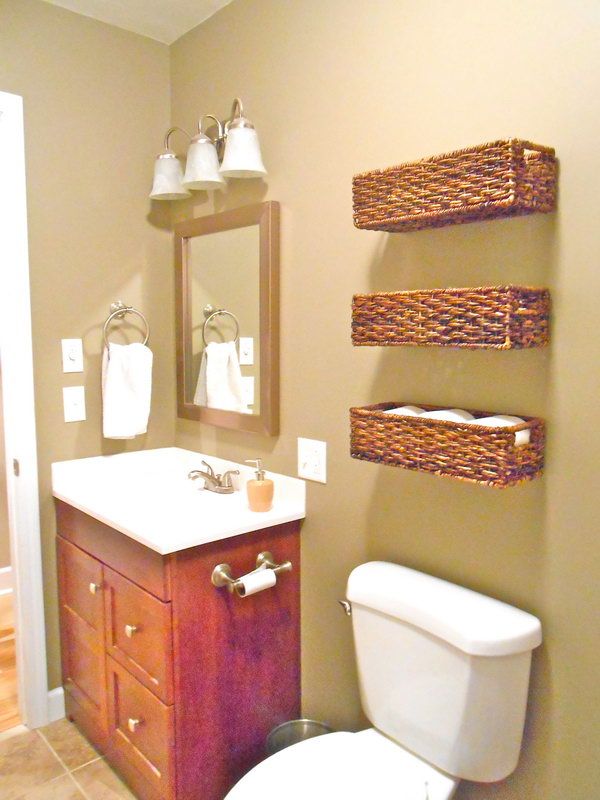 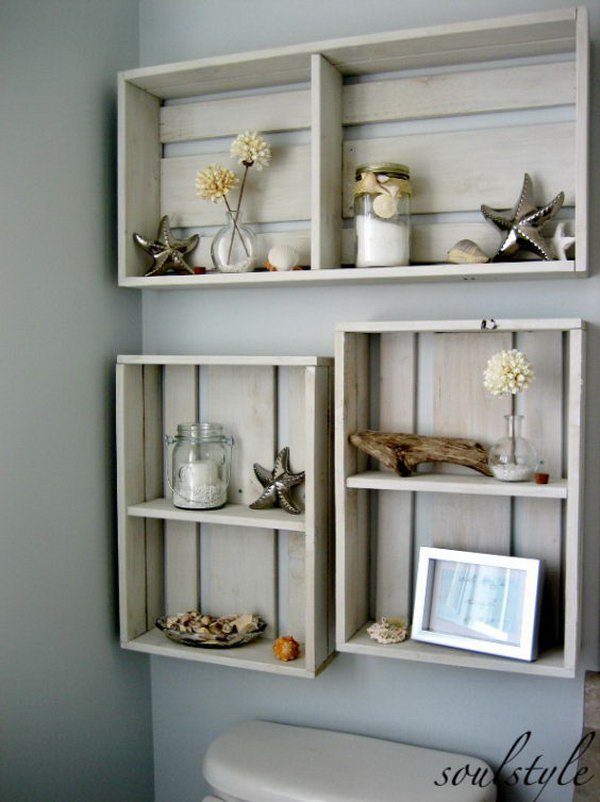 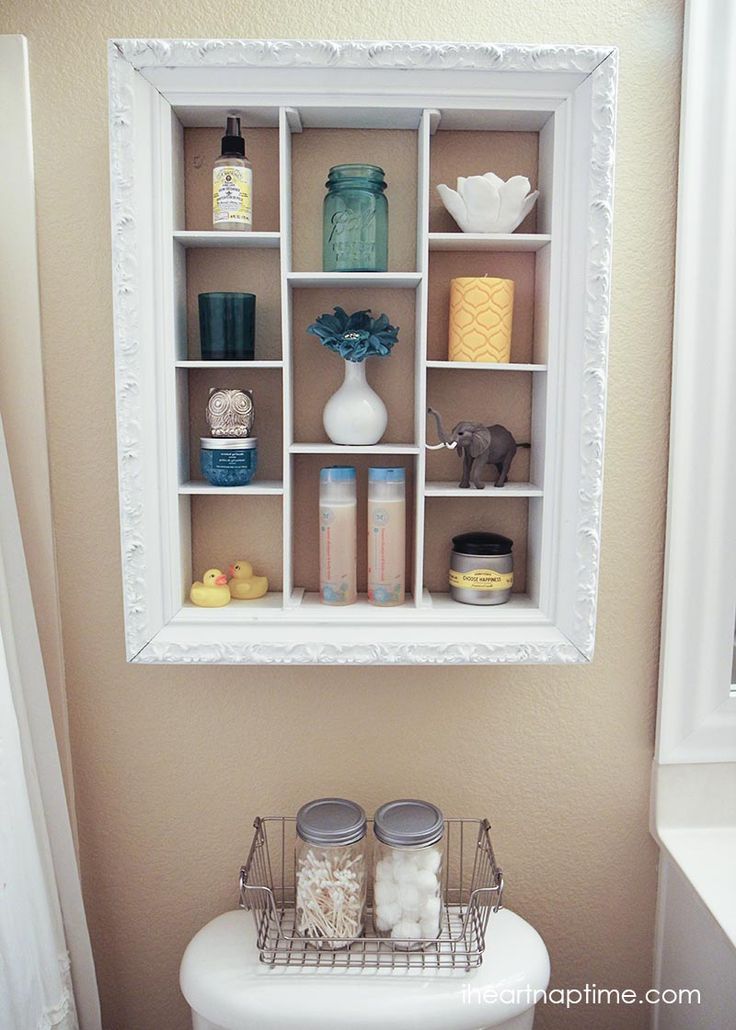 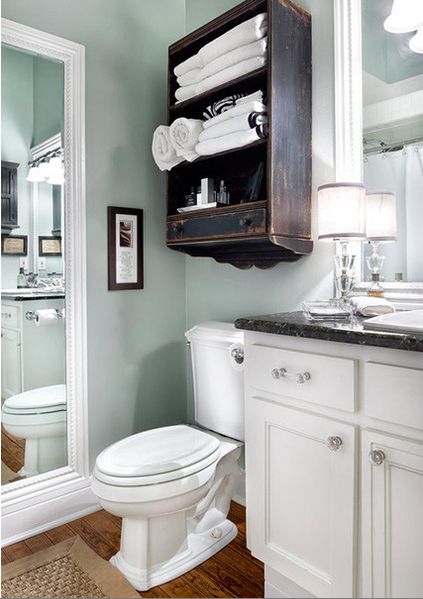 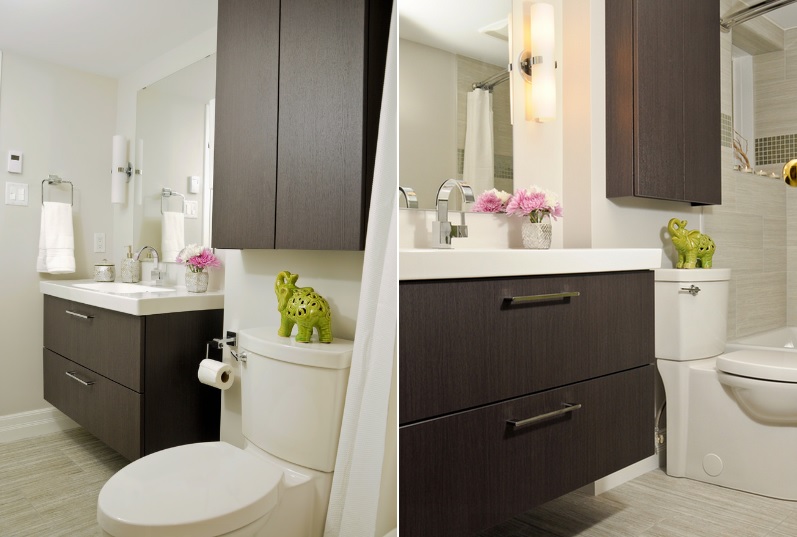 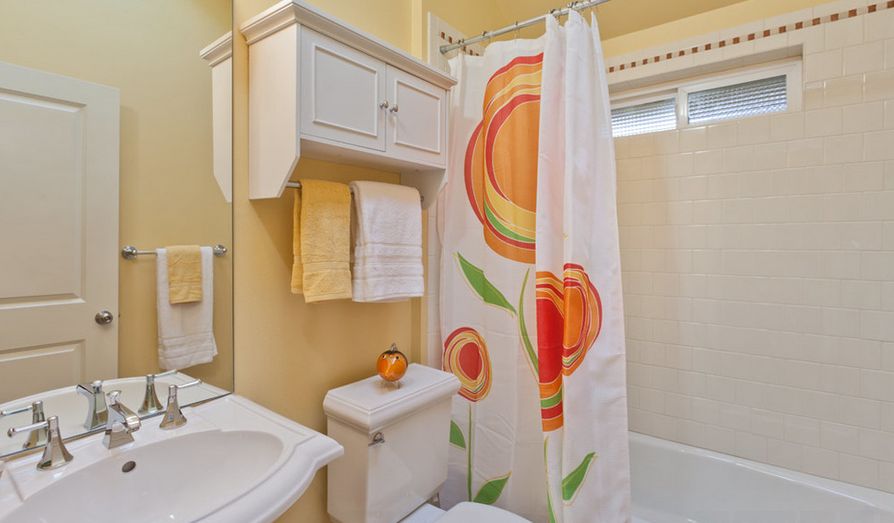 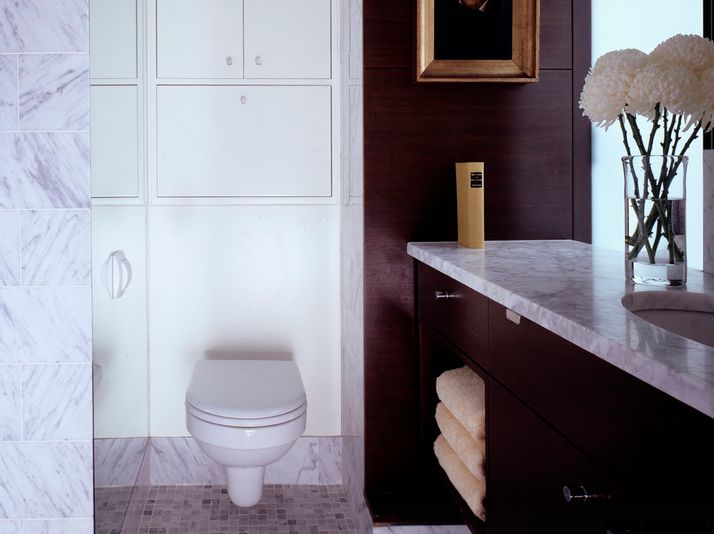 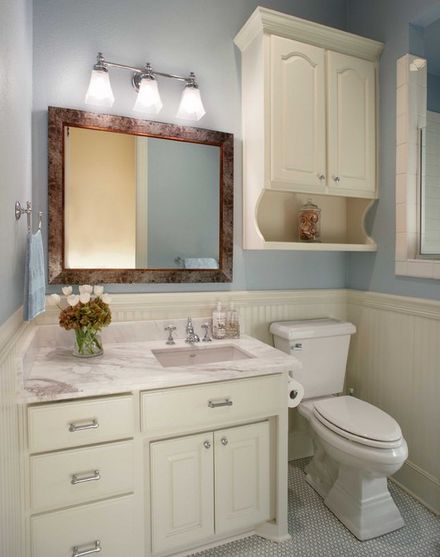 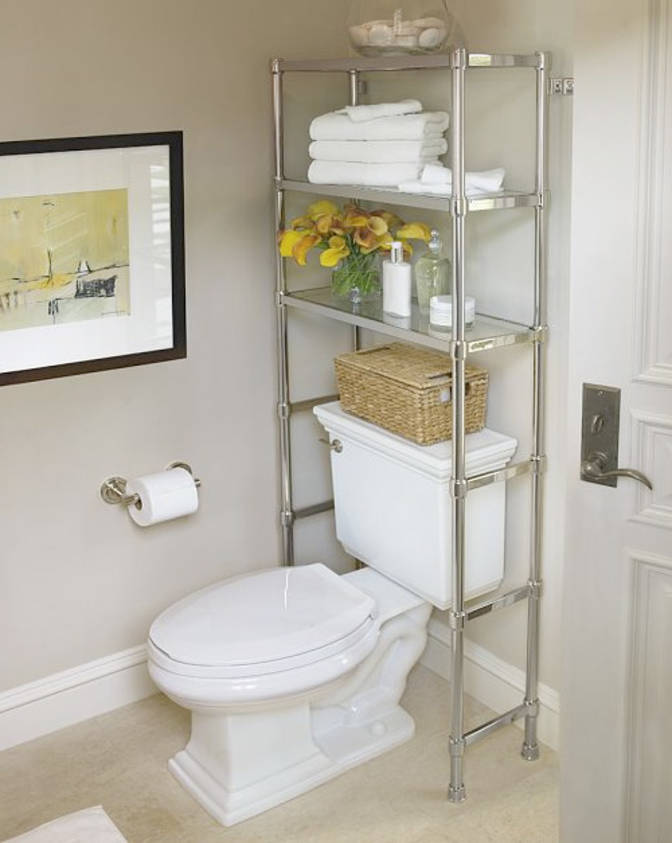 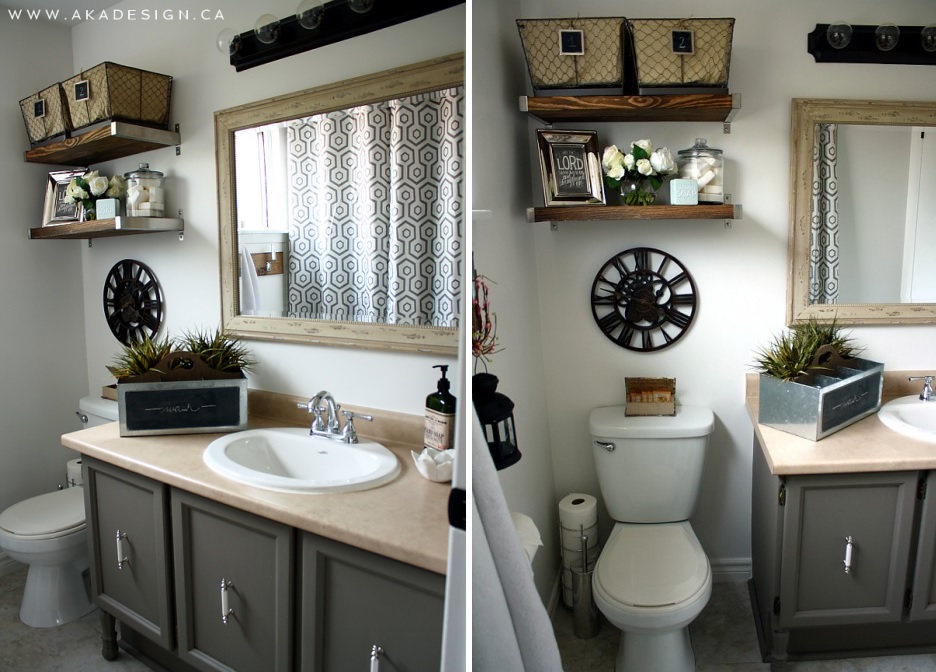 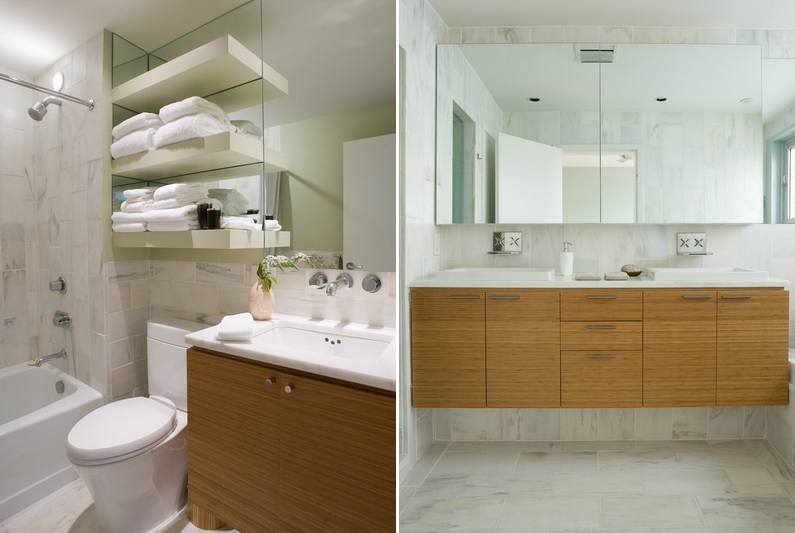 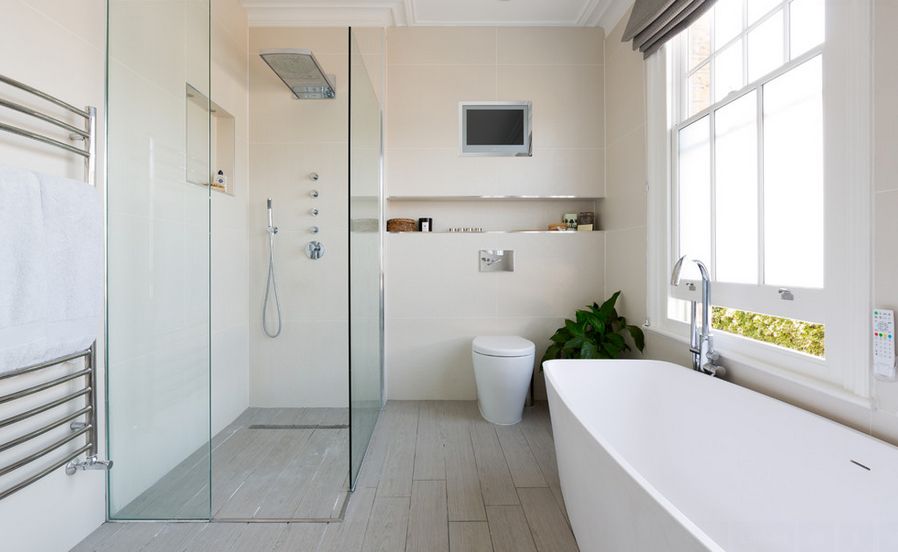 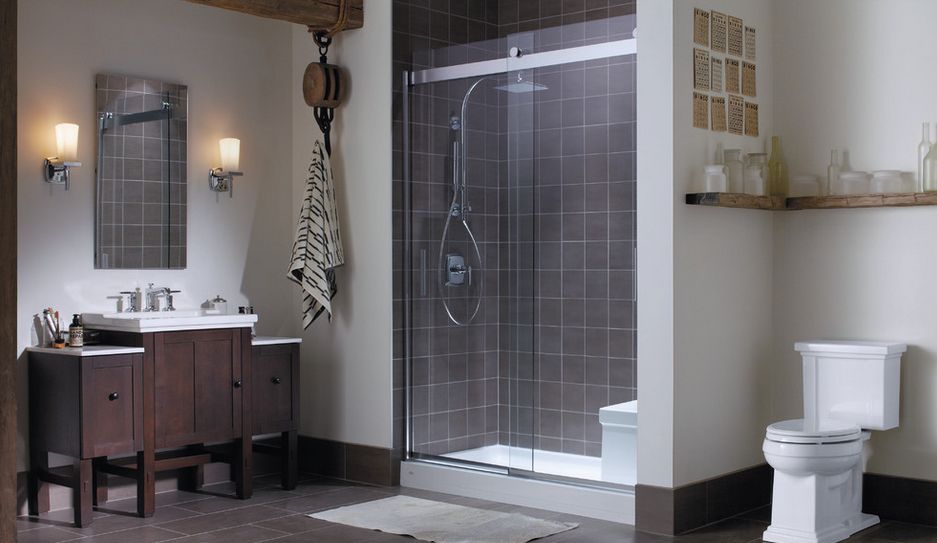 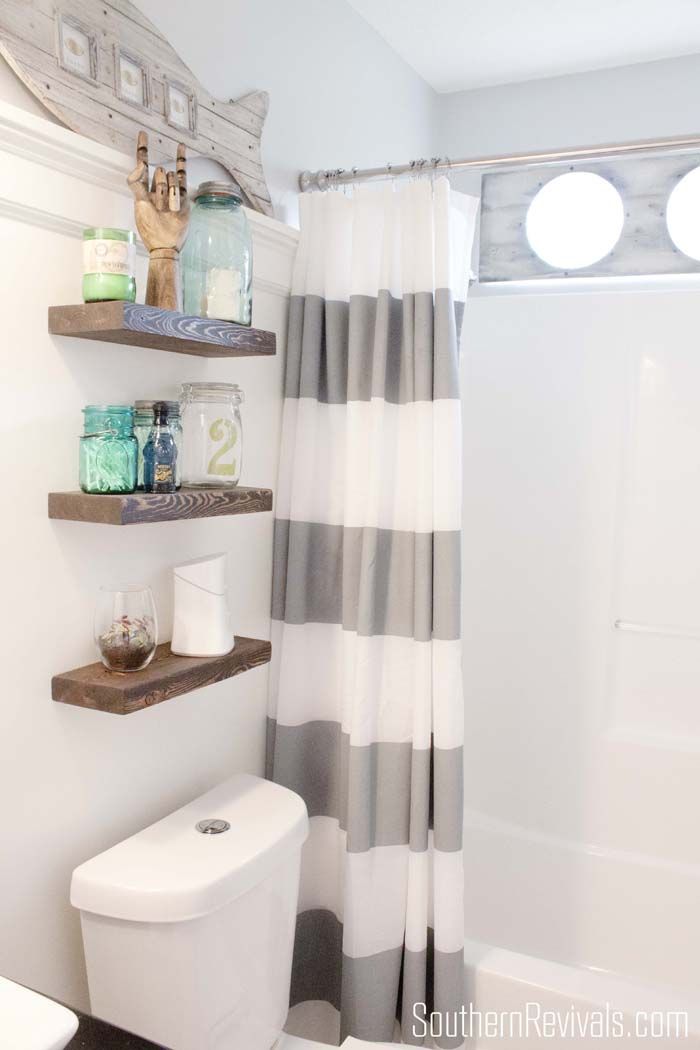 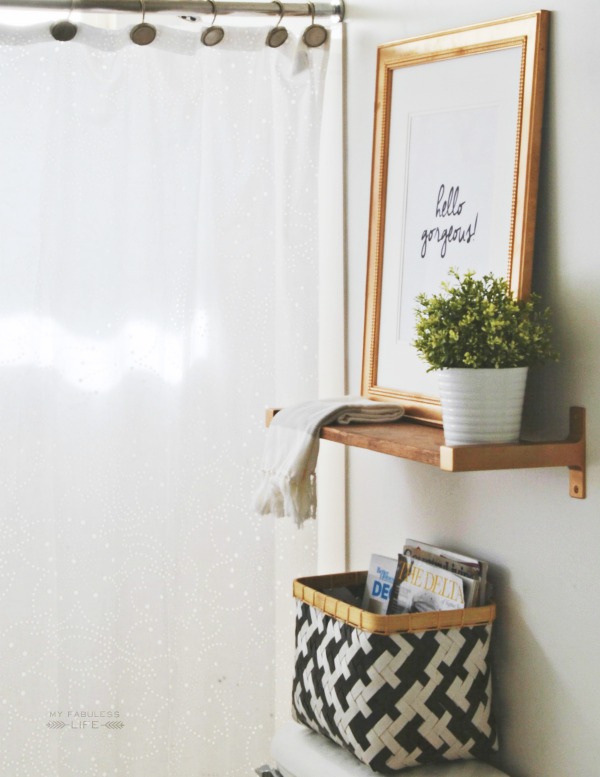 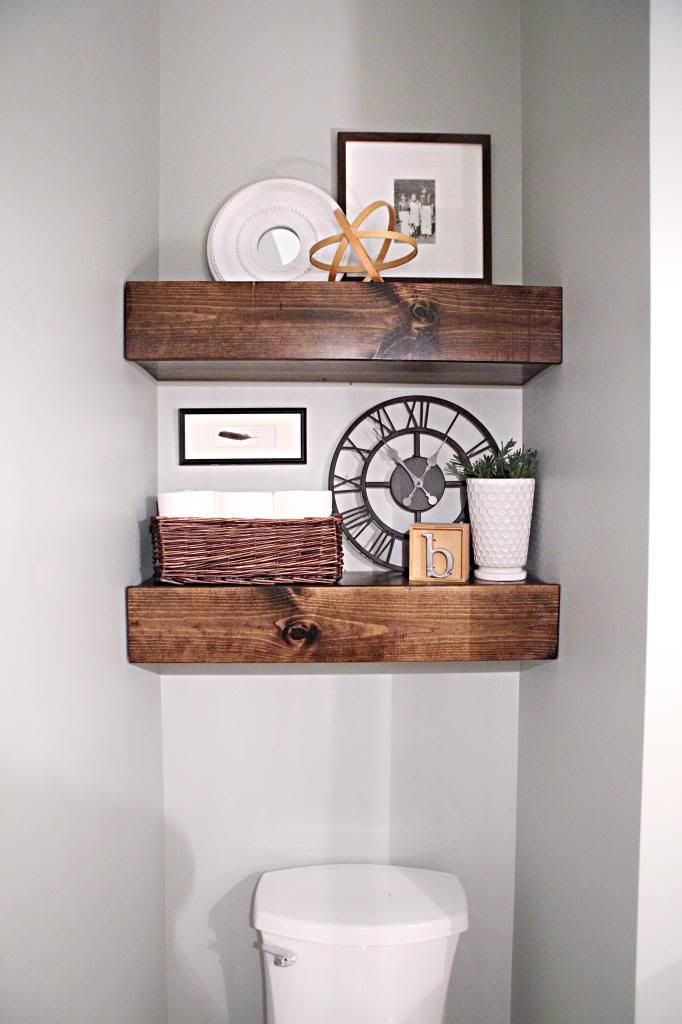 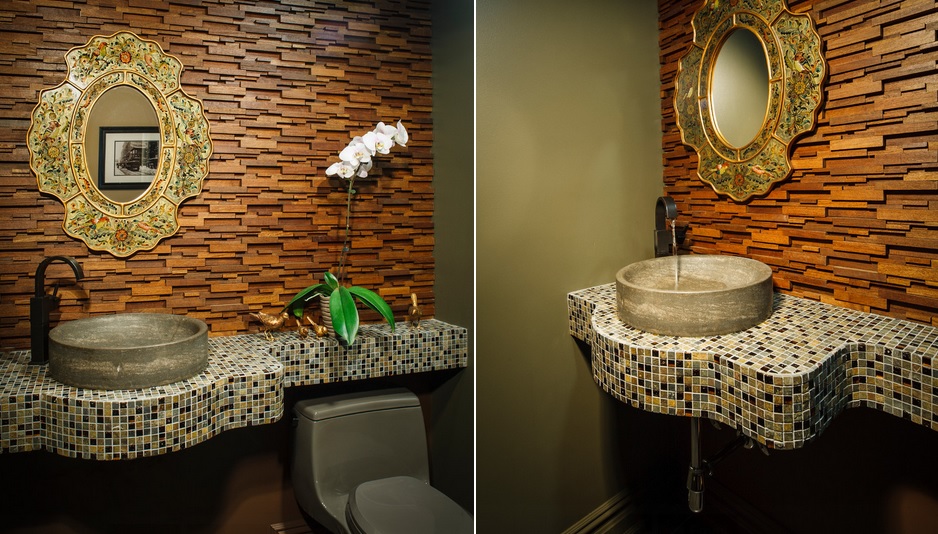 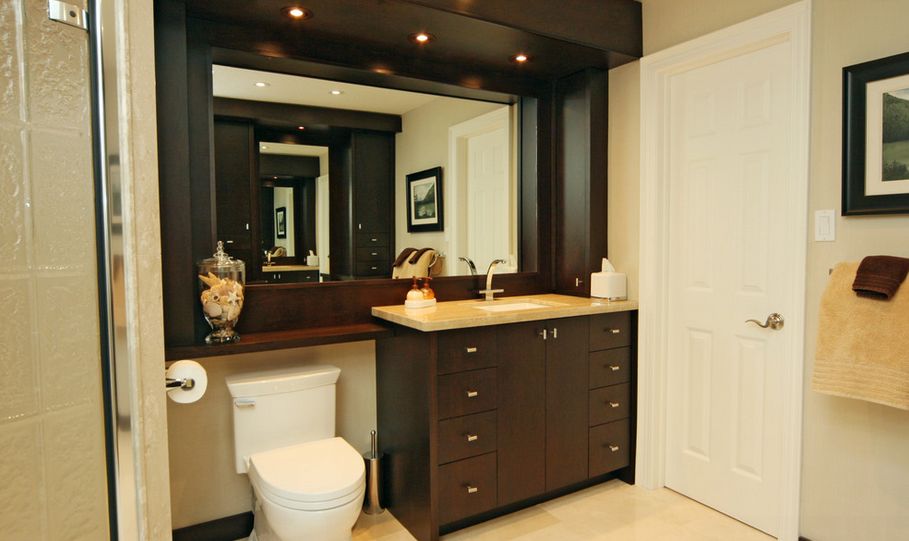 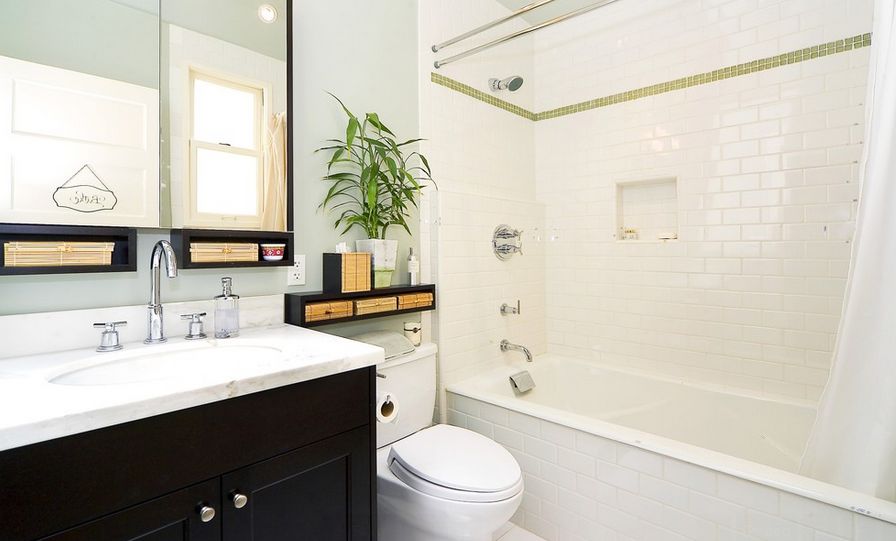 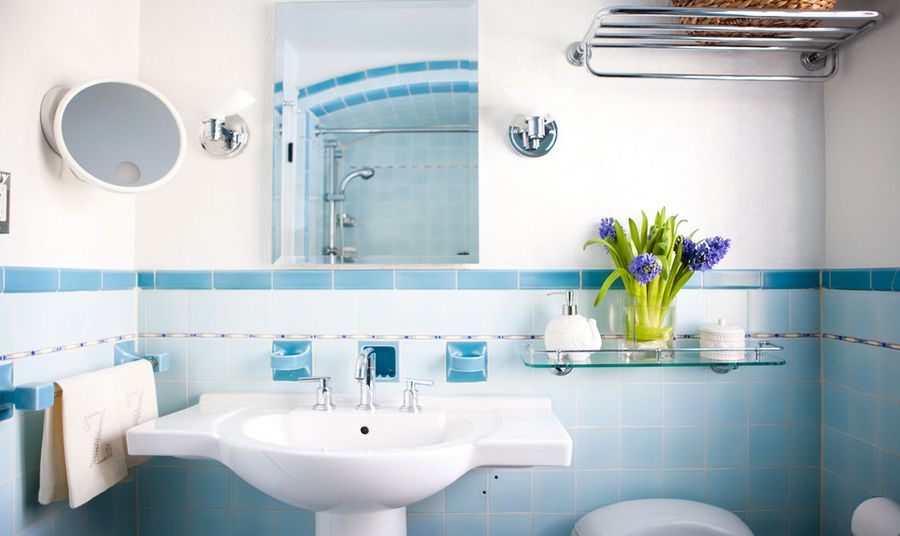 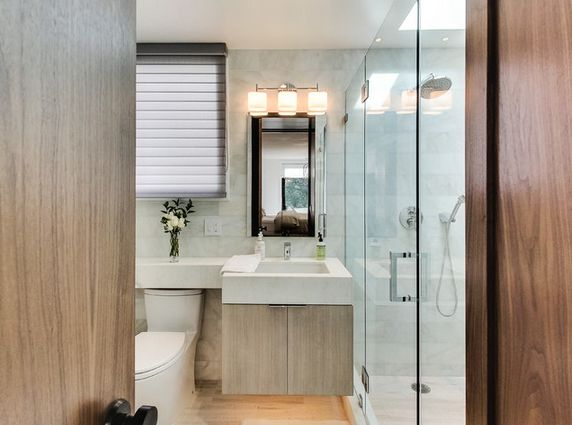 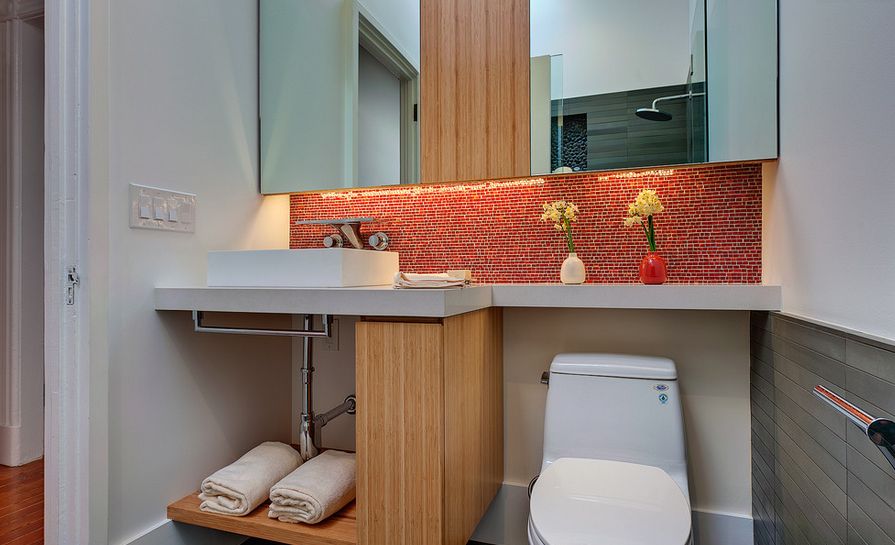 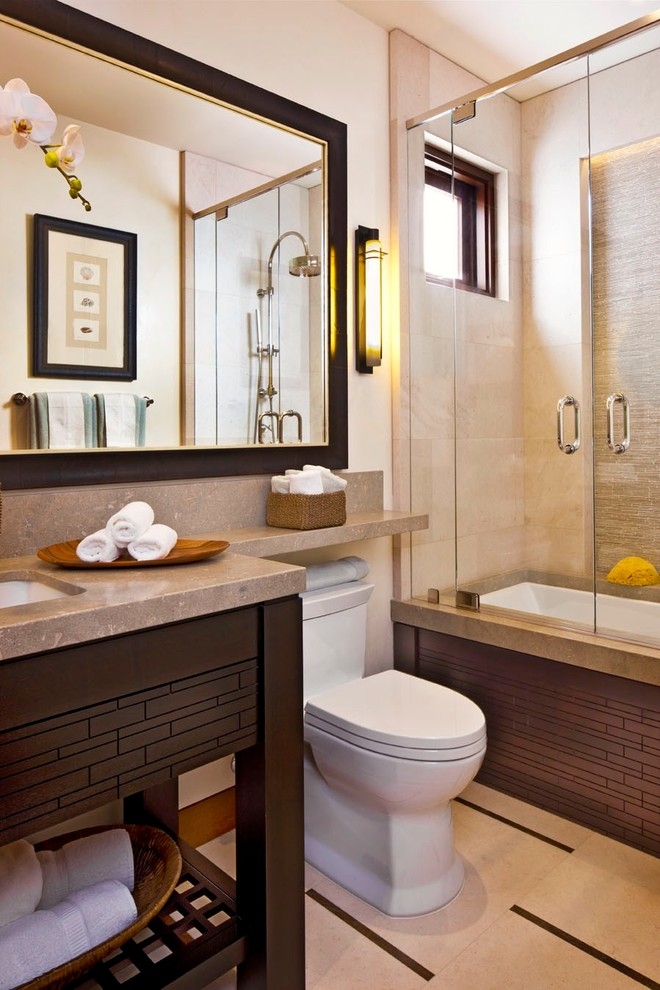 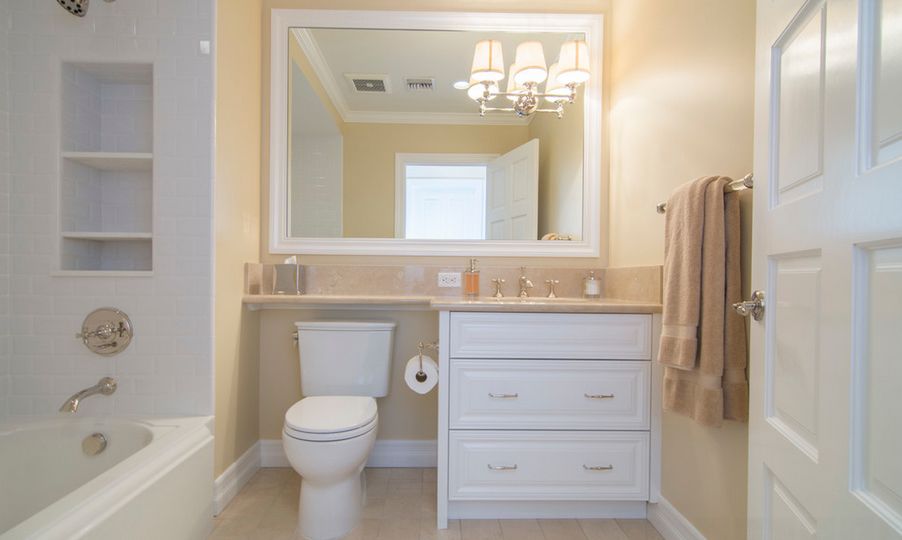 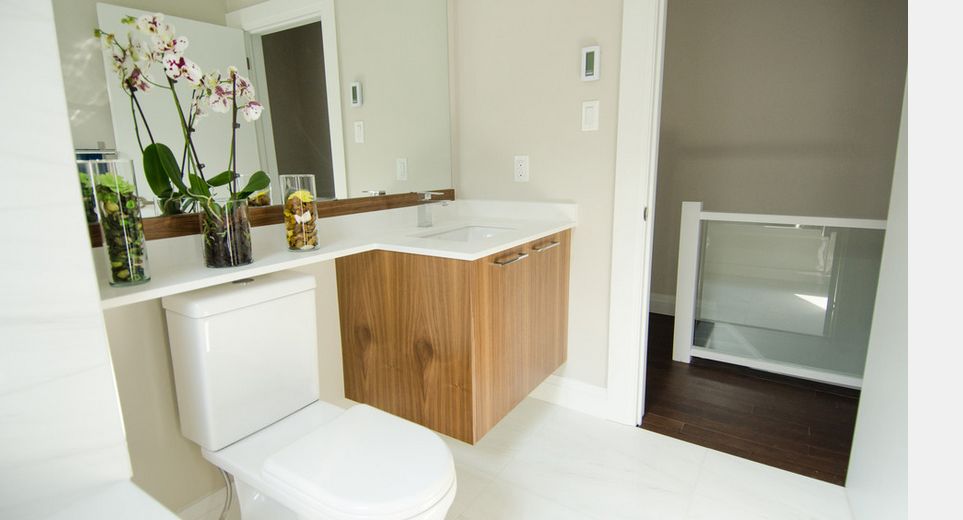 So many great things you could add to a bathroom and so little space you can use for it. This is the major issue with most small bathrooms. But, when you think about it, even if you had a bigger bathroom, you’d still use the same solutions and ideas. The only difference is you’d just have more empty space left after you’re done decorating. At the end of the day, the storage solutions are the same ones regardless of the size of the bathroom. The space over the toilet, for example, is almost always used the same way. There’s usually either a cabinet or a shelf in this area.

Over the toilet shelves

An over the toilet shelf is a good design option when the toilet is adjacent to the sink and the space directly above them features a wall-mounted mirror or some other element. In these cases, the sink vanity extends into a shelf.

These designs usually feature custom vanities that are created specifically for that particular space. The counter and the shelf over the toilet form a single structure and this ensures a cohesive and continuous look throughout.

The shelf above the toilet can be used in a variety of ways. It can hold the extra toilet paper or it can be a display surface for a small vase for example. Either way, the shelf is quite useful and definitely an appreciated addition.{found on jeremyharnish}.

In addition to this particular shelf or platform, you can also add several others and mount them above the toilet in order to maximize the storage capacity of the bathroom or if you want to have a place for organizing your makeup products for example.{found on l2interiors}.

Use the shelf to display a tiny vase or two and, if possible, try adding LED lighting to the underside of the mirror to light up the flowers and turn them into tiny centerpieces for the room.

The type of toilet shelf we described so far is only one of the many options. In this case, for example, the shelf is more of a platform designed to match the sink and is used as a display surface, offering the bathroom a fresh vibe.

The shelf can be a freestanding piece. It doesn’t have to be a continuation of the sink or vanity. It can be made of glass, like in this case, if you want it to stand out as little as possible and to be versatile. Glass is a good option in this case also because of the color palette.{found on tessfine}.

The shelves can also be storage boxes. They can even have small built-in drawers although there’s much you could store inside them. They would also serve as regular shelves.

In this case the shelf over the toilet looks like a part of the mirror frame. It also matches the cabinet under the sink and is barely noticeable because of that. It actually frames the toilet nicely.{found on jenniferbrouwerdesign}.

The way the countertop extends over the toilet seems very natural here. The colored mosaic tiles contrast with the textured wall but fit right in thanks to elements such as the mirror frame and even the gray toilet.

When the toilet is placed in a tiny nook like this one, this is basically an invitation for you to fill the space above it with shelves. Two are enough in this case given their size. They’re really useful for storing and displaying things.

The shelf can be mounted some space above the toilet and doesn’t have to share a connection with it. It can simply be an accessory, an extra surface on which to place a small potted plant, a framed message or an extra towel.{found on myfabulesslife}.

Surely there are plenty of things you could store on a set of shelves placed above the toilet but really close to the tub or shower. You just have to reach out in order to get the item you want and they stay nicely organized there.{found on southernrevivals}.

When the toilet is placed in a corner, don’t even think twice about adding a corner shelf. It will frame the toilet nicely and it will be really space-efficient and practical.

Instead of a wall-mounted shelf perhaps a wall niche would be more suitable for your bathroom. It’s minimalist and versatile and it looks good in most modern and contemporary bathrooms.

Here’s an interesting approach: even if there’s a large mirror above the sink and toilet, three modern shelves were added to one half of the wall and they offer storage for towels given their proximity to the tub and shower.{found on erdreicharchitecture}.

If you plan on using the shelves for storage, then you can put the small things in boxes or containers and then put them up on the shelf. It looks neat this way and it’s a simple and efficient way of organizing your supplies.{found on akadesign}.

A shelving unit can also be a practical option. You can have it frame the toilet and remove the bottom shelves. Just make sure you leave enough space between the shelf and the tank to be able to operate it comfortably.

Over the toilet storage

Another option is to have wall-mounted storage above the toilet. Compared to shelves, cabinets are less accessible given their placement. However, they tend to be more hygienic.

Over the toilet storage can take many different forms. Traditional medicine cabinets are just one option. Another one is built-in storage. It works really well when combined with a wall-mounted toilet.

If the toilet is next to the shower or tub, add a towel rack to the underside of the cabinet. Some cabinets actually have such a feature integrated in their design but you can also add this accessory later on.

Opt for a big cabinet that goes all the way up to the ceiling if you want to maximize the storage in a small bathroom. Although it will be difficult to reach the upper shelves, they’re still useful for storing items you don’t use on a daily basis.{found on lindencraft}.

This is pretty much the same thing as having three simple shelves above the toilet. The different is they are connected and come in the form of a vintage cabinet which also seems to have a small drawer at the bottom or at least two knobs from which to hang something.

You can make your own over the sink cabinet using an old photo frame or a shadow box. You have to divide the interior into several compartments and you can choose their shape and size.{found on iheartnaptime}.

Another idea is to repurpose some wooden boxes. Mount them on the wall above the toilet and turn them into storage for the things that usually go up there. They can also be for display.{found on soulstyle}.

Or you can use baskets. The whole idea is to attach them to the wall wherever you find some available space. Above the toilet seems like a good place. These baskets are perfect for keeping toilet paper in.

Similarly, you can use this type of containers. First you need to attach the rods to the wall. Then hang the baskets to the rods using ribbon or something similar. Hooks would also work if you want to be able to remove them whenever you want.