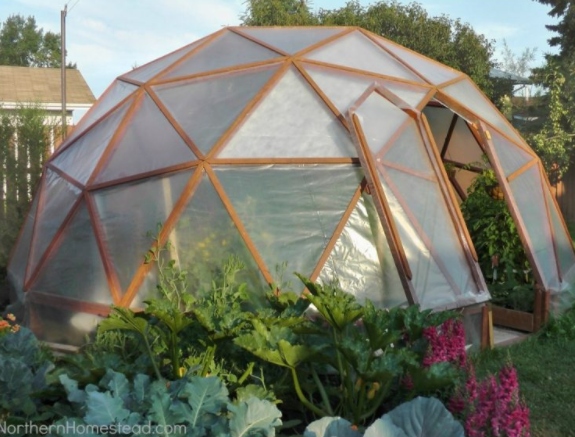 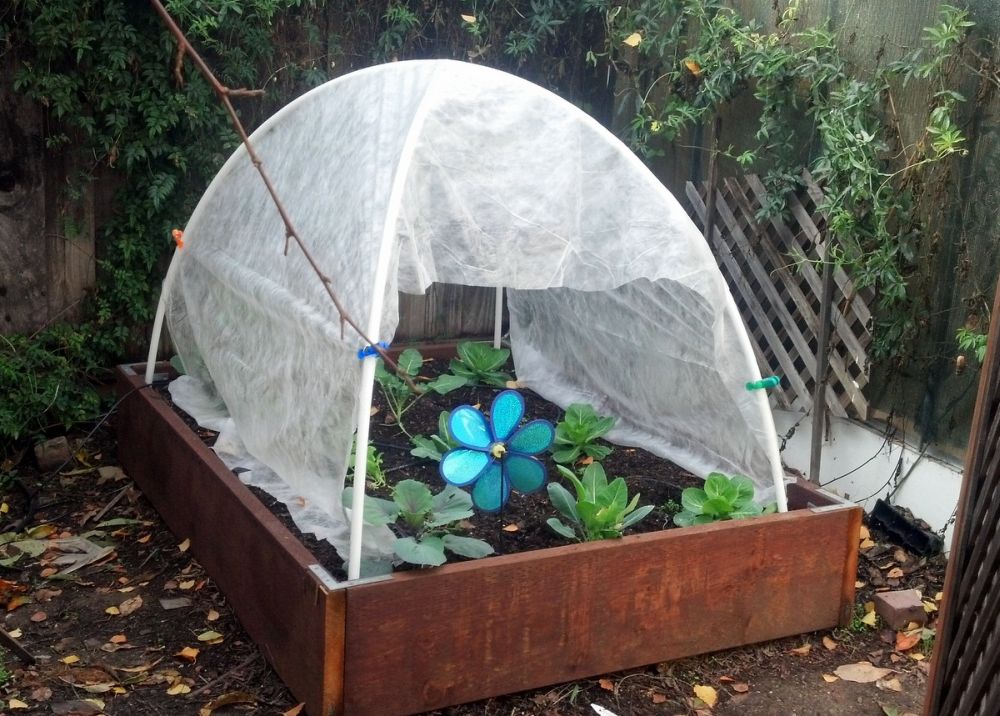 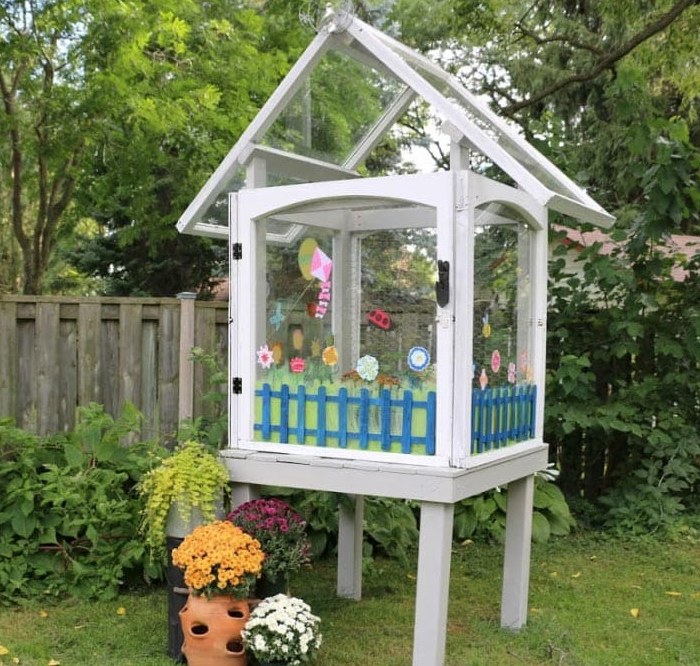 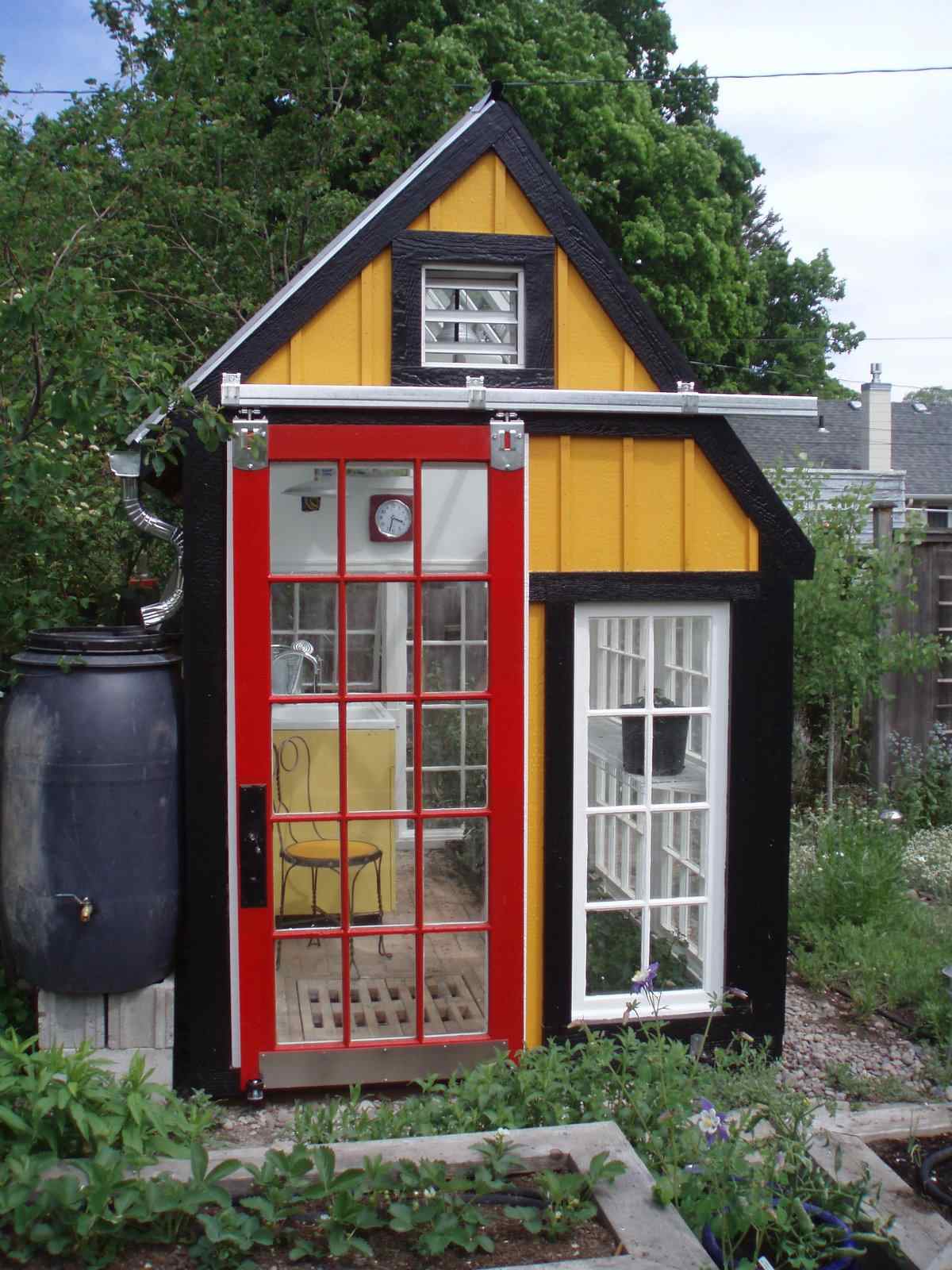 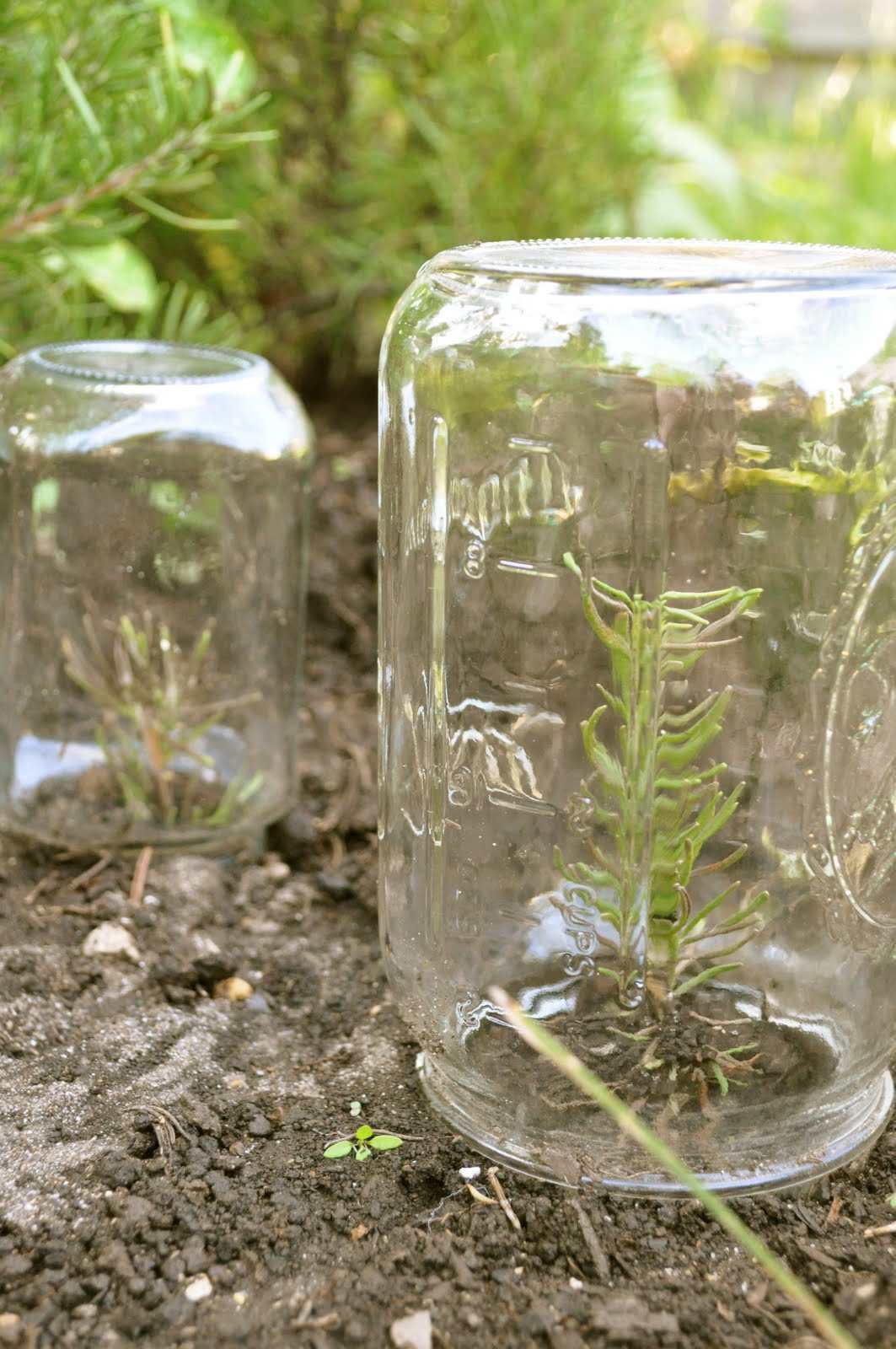 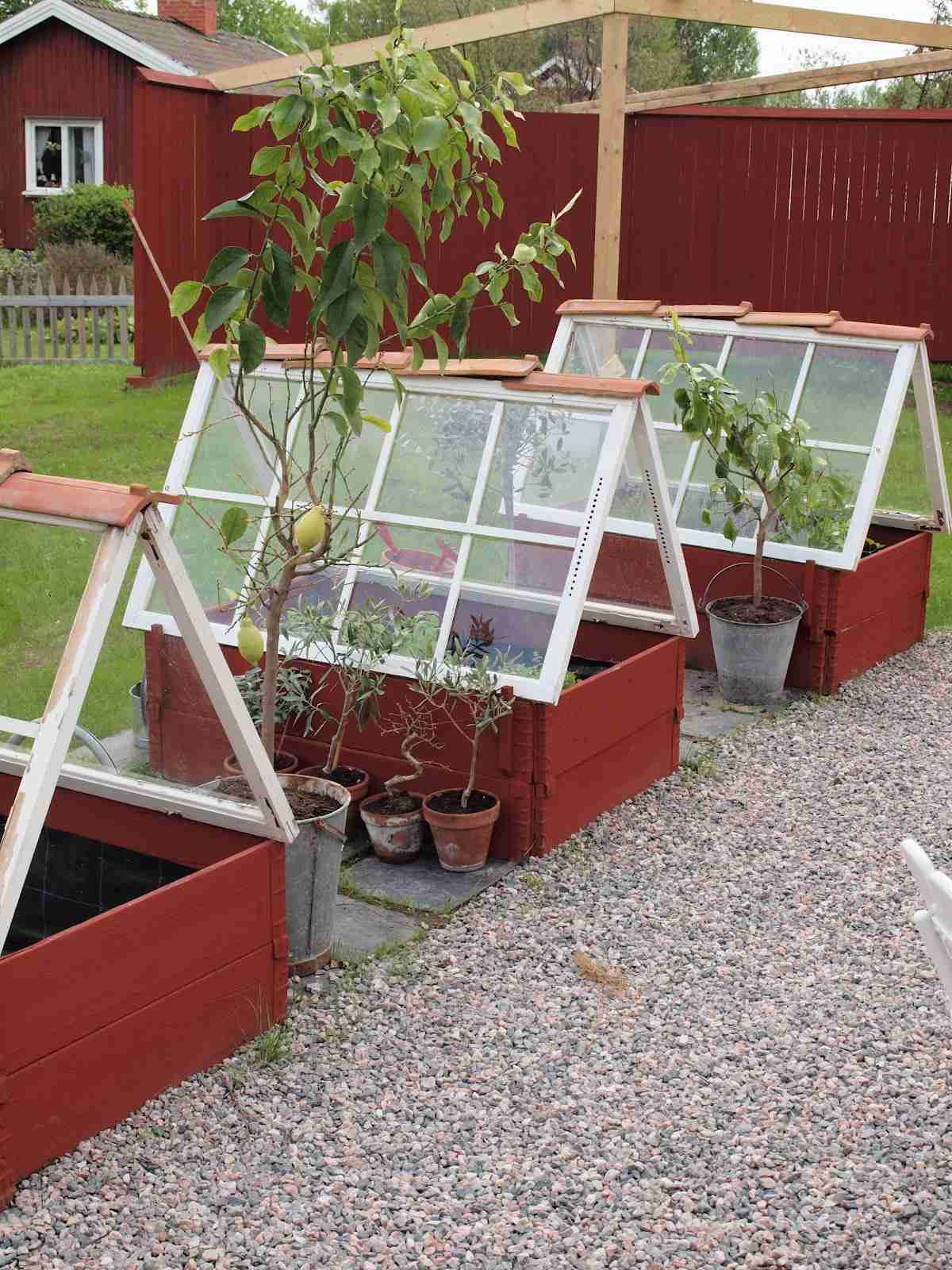 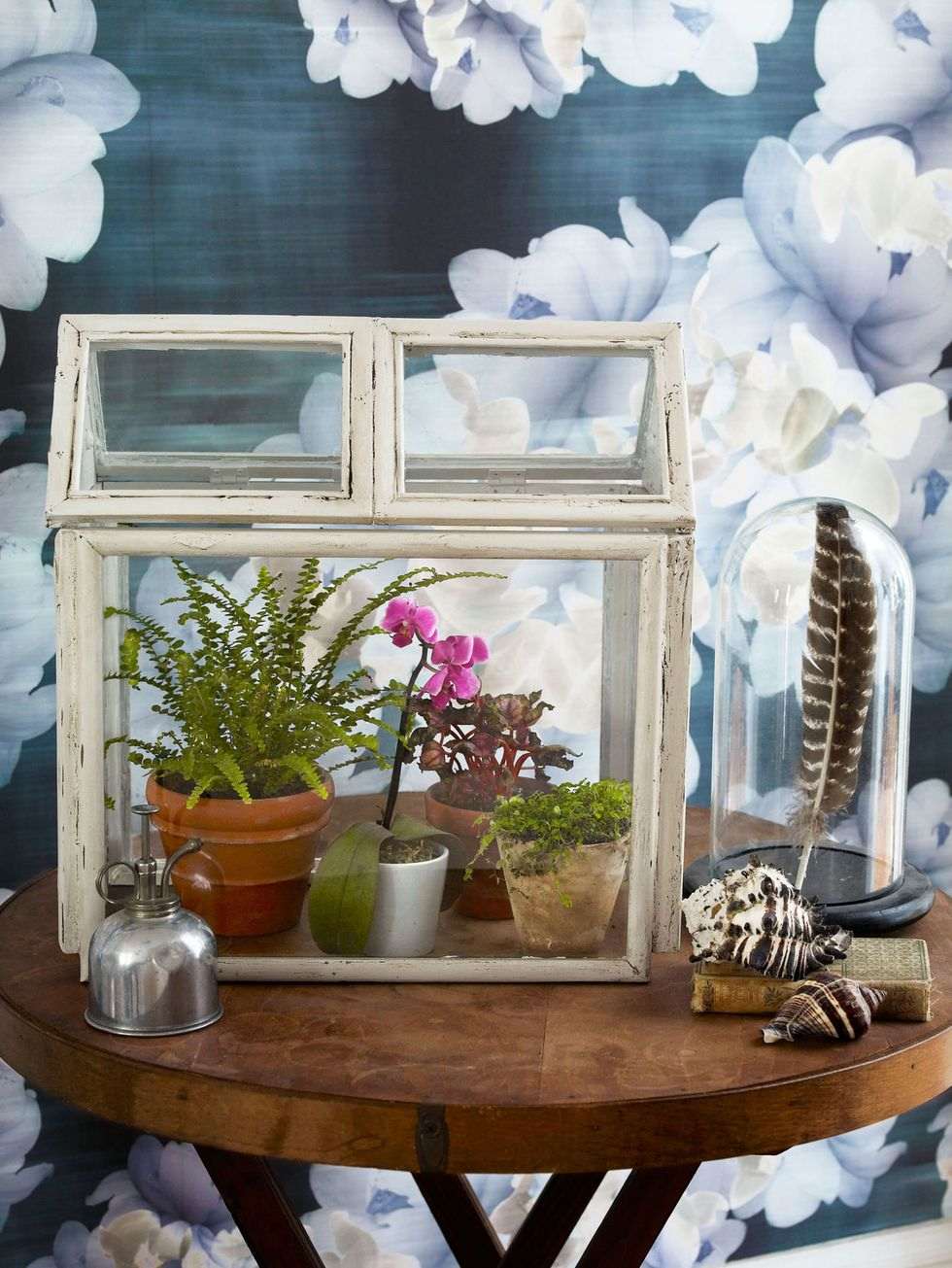 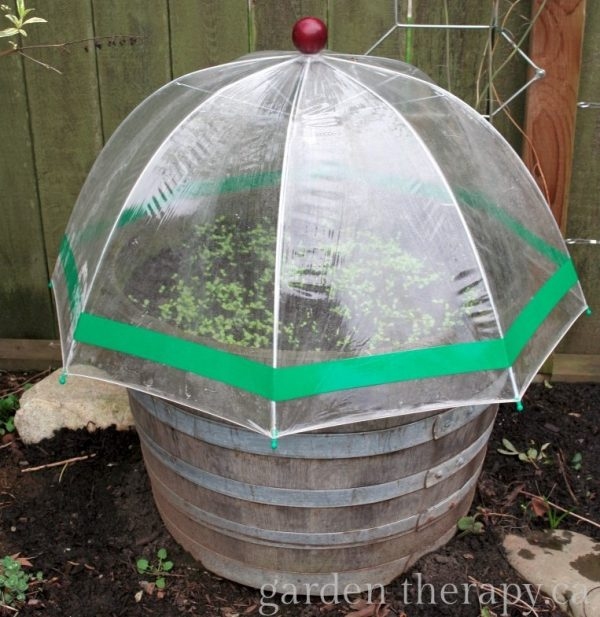 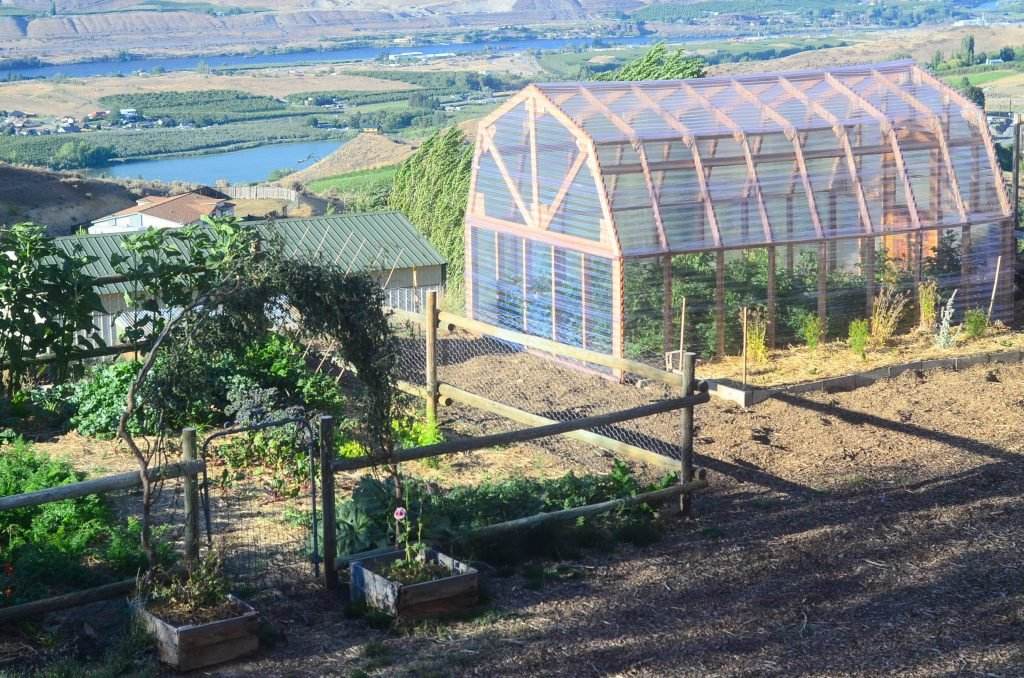 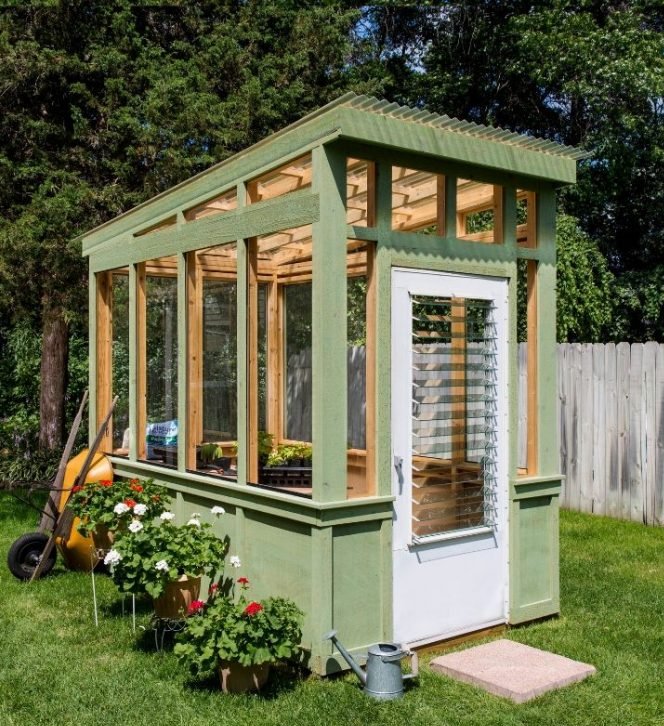 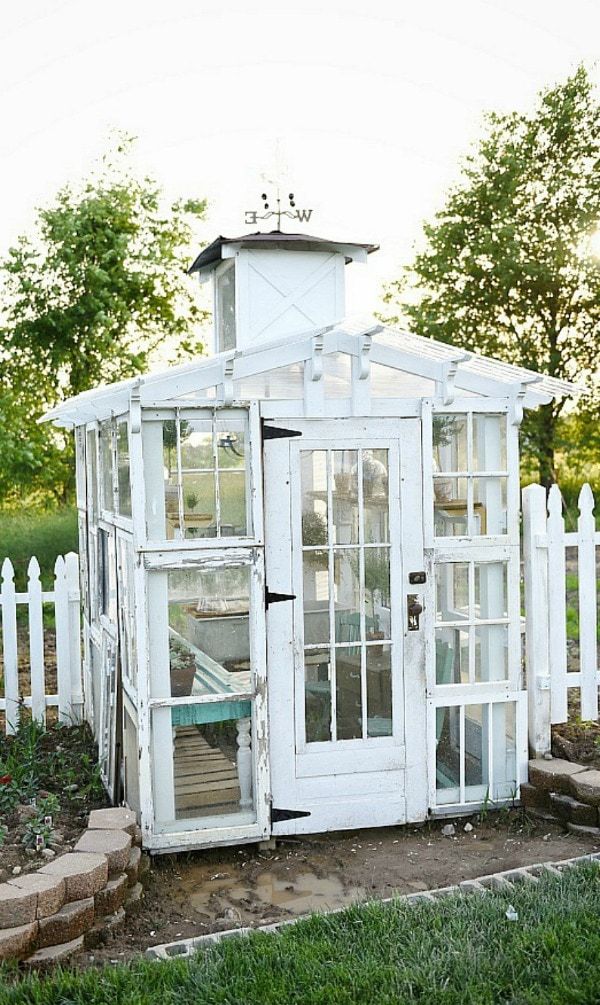 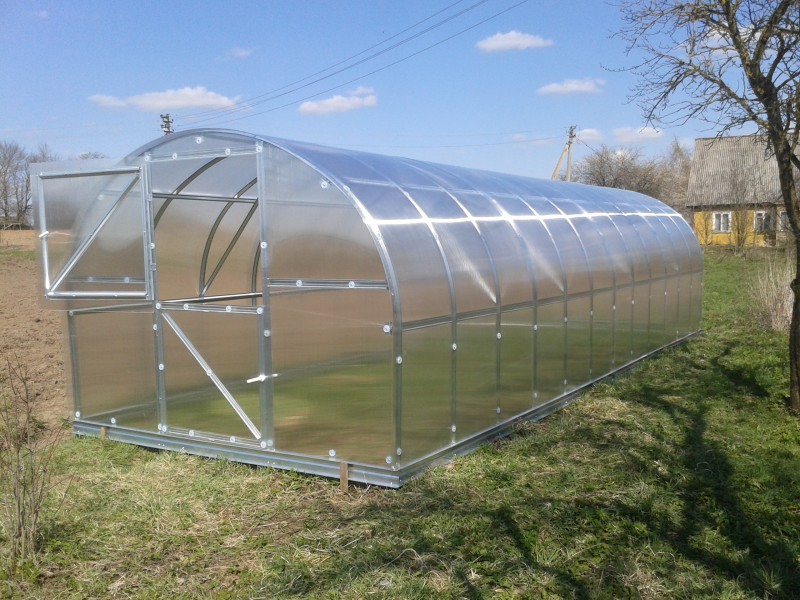 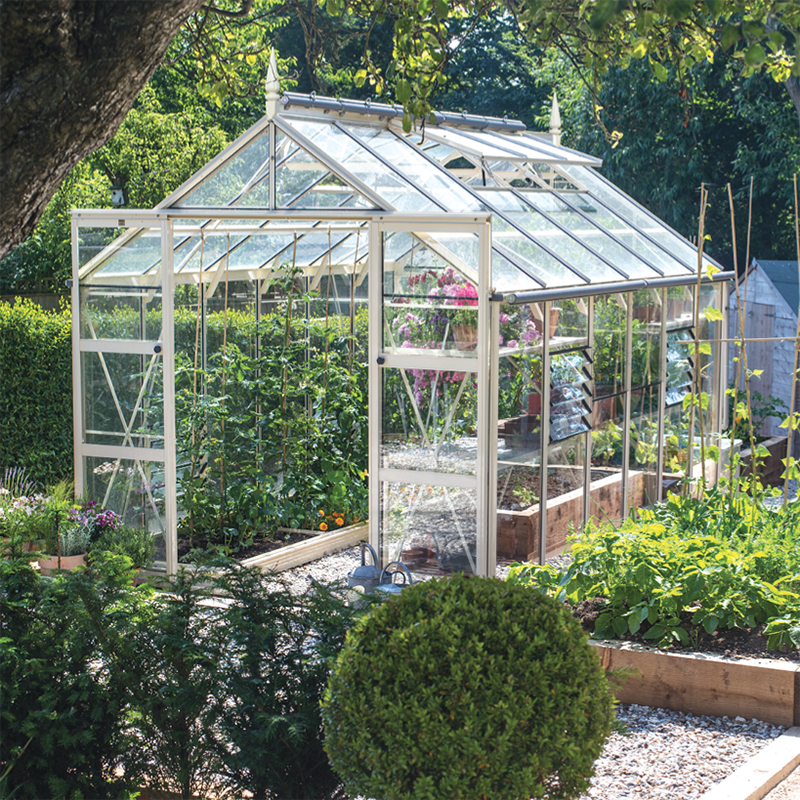 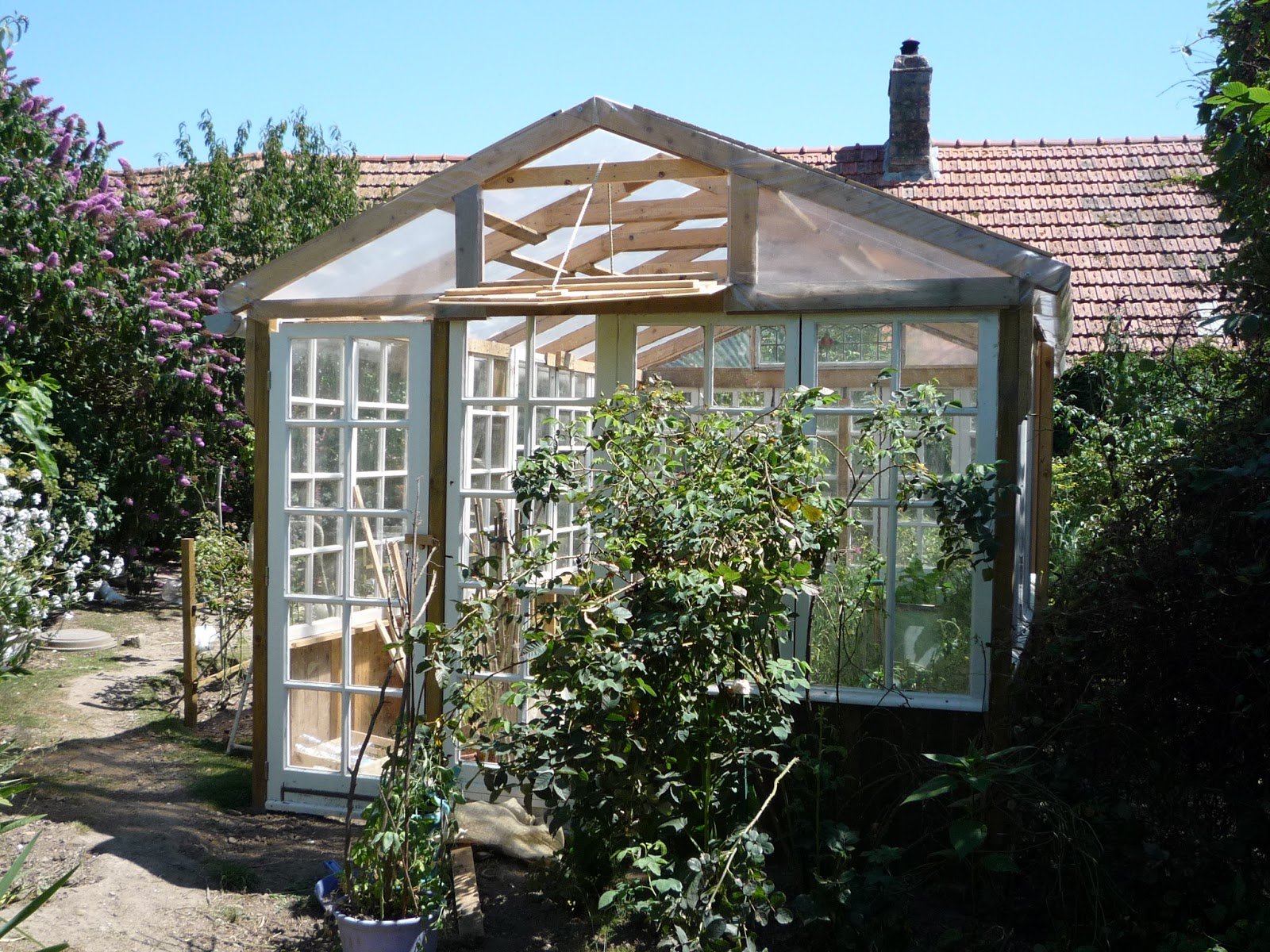 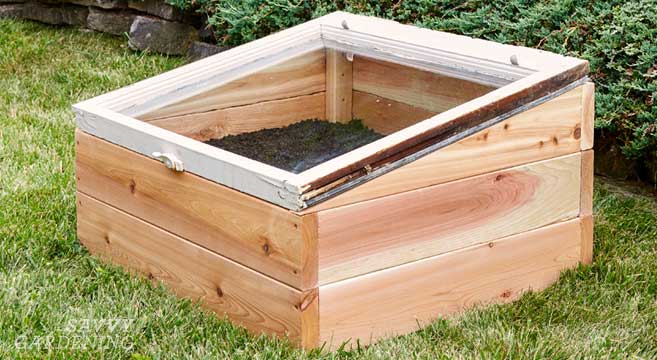 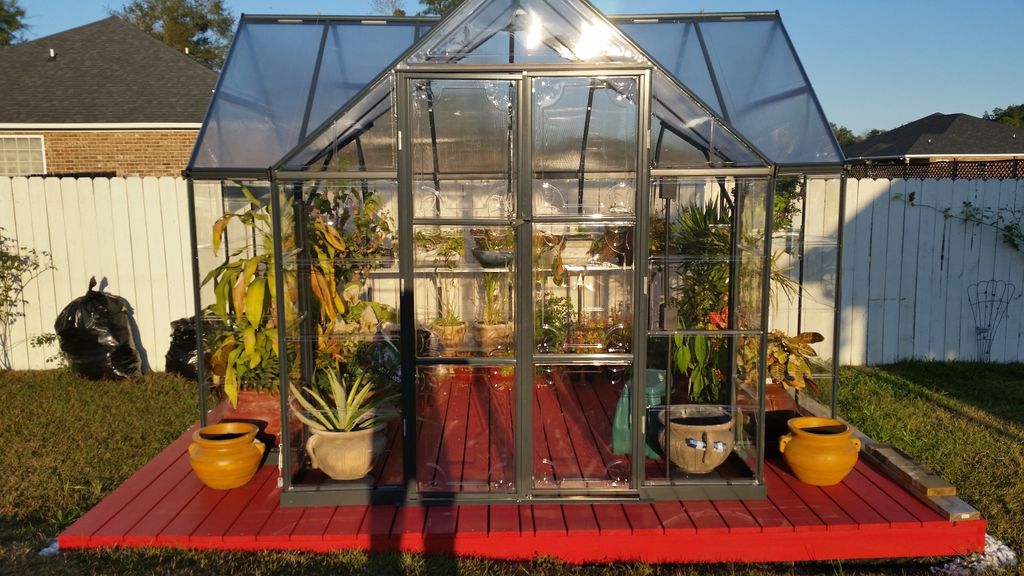 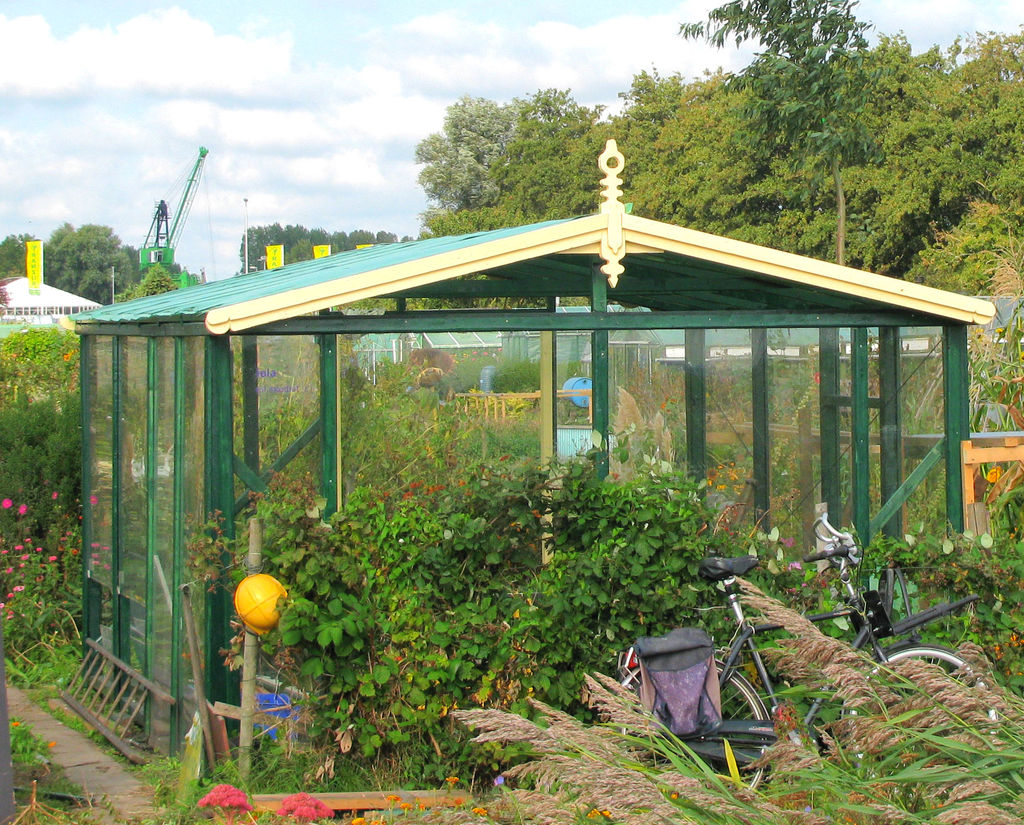 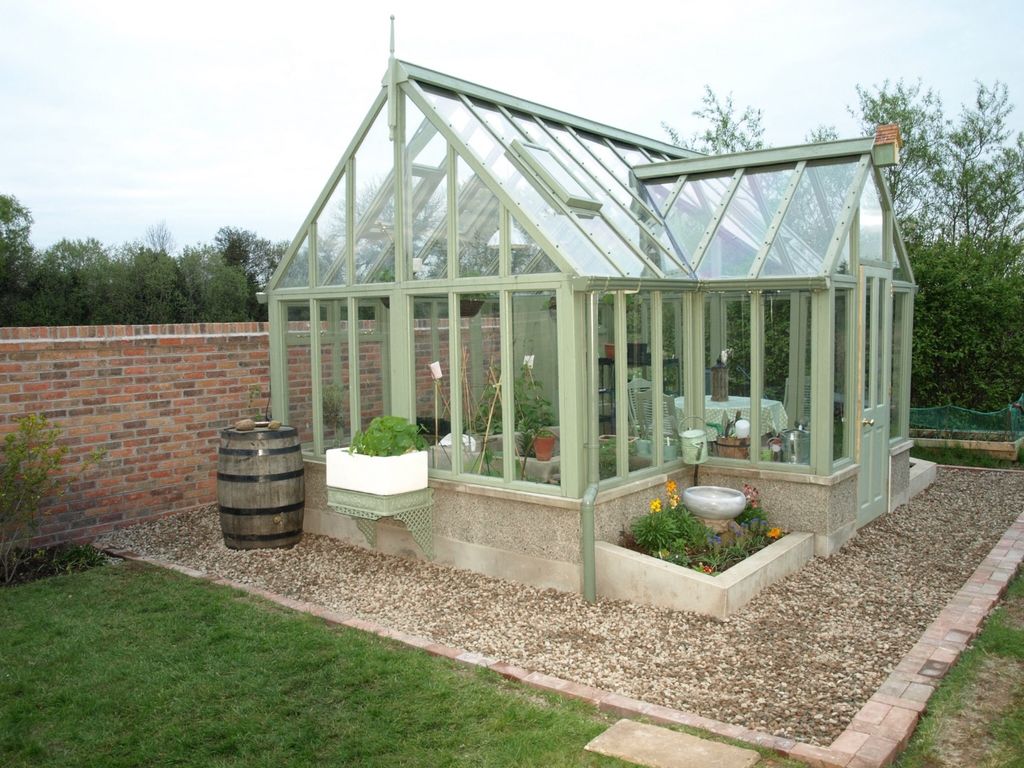 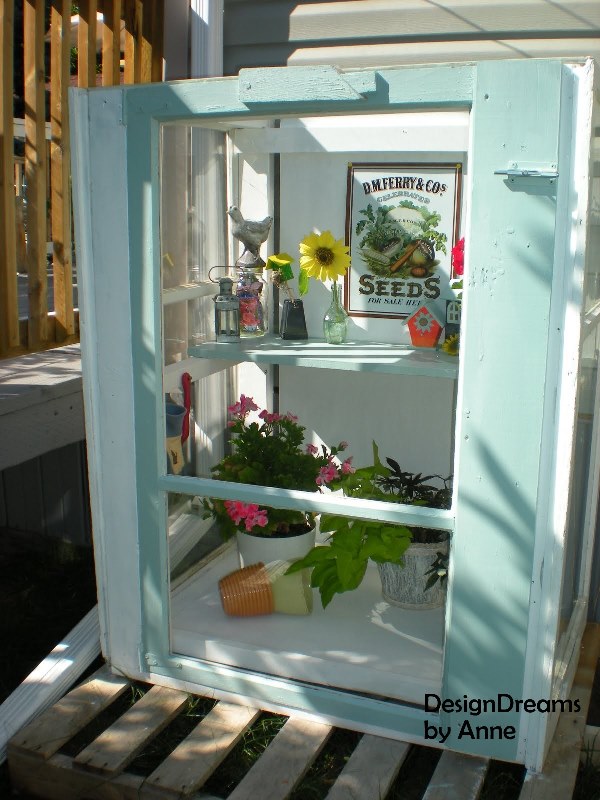 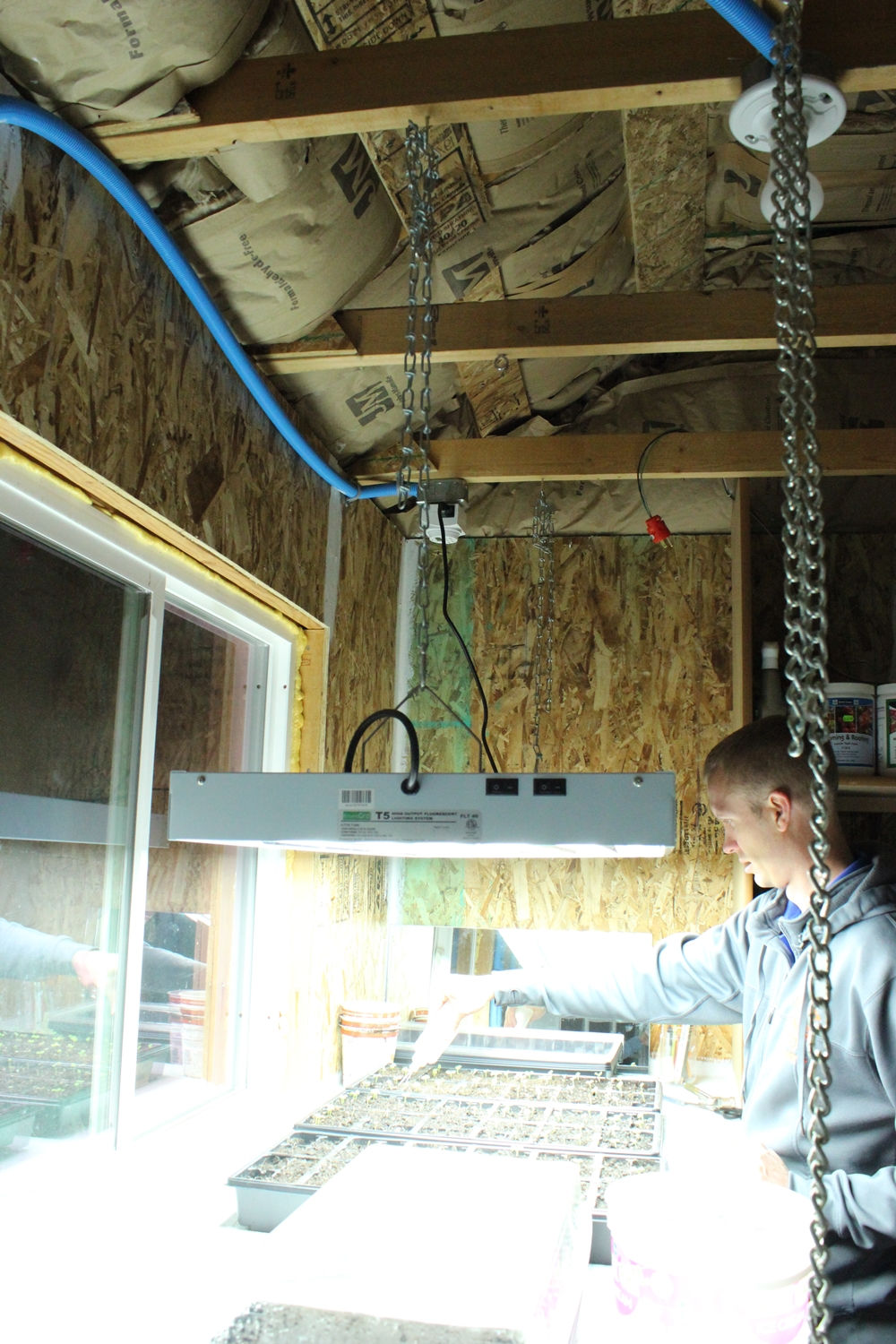 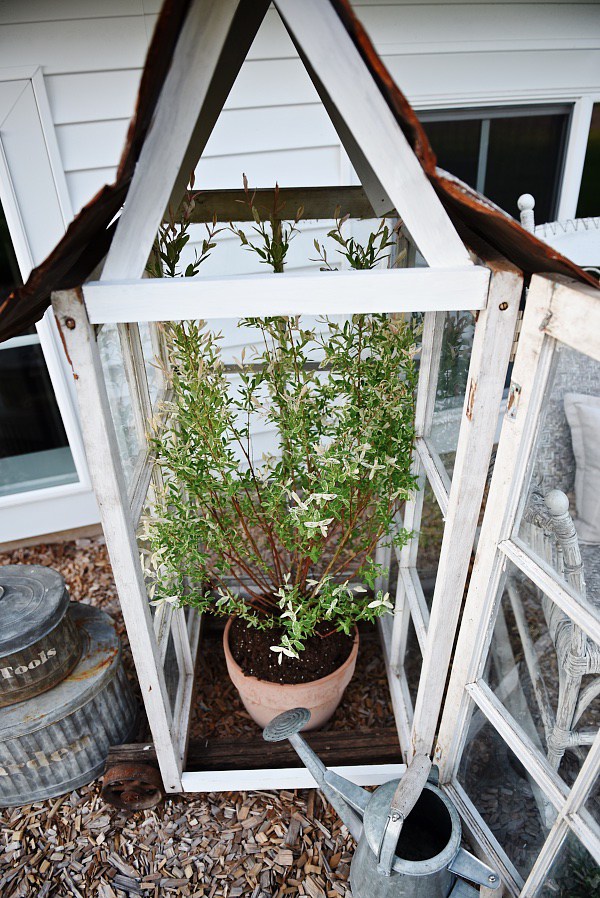 We often say that building stuff is easy and a lot of the times it is but that doesn’t mean you’ll be successful without paying attention to all the details or without trying your best. Let’s say you want to build a greenhouse. You’ll definitely need the appropriate greenhouse plans for such a project. The initial phase where you establish the dimensions, placement and the list of materials and tools needed for the project is as important as the actual crafting/ building phase.

We’ll start with something simple: a window greenhouse. It’s not a greenhouse you can attach to your window but one which you can build out of old windows. This is perhaps one of the most practical ways in which you can repurpose old windows. We found this inspiring project on thewhitecottagefarm and we were pleasantly surprised to find out that it’s super easy to do and that it can be completed in no more than 15 minutes (as long as you already have everything ready). You’ll have to put together a sort of roof for this tiny greenhouse and you can improvise on this part and use whatever you can find around the house.

We have another inspiring project to share with you and this time the plans are for a tiny indoor greenhouse. It’s a nice project for beginners and these are the supplies required for it: a grow light, a timer, seed trays with lids and seeds. You can use a table as a surface for this project but it can also be a workbench, a desk or pretty much any flat surface. You could even use the floor if the temperature is ok. The greenhouse plans are dependent on the size of the light fixture so choose it carefully.

Check out this lovely little greenhouse that we found on designdreamsdyanne. The greenhouse plans used for it were free so be sure to check them out if you plan on building something similar. In any case, we really like the way it turned out. It looks cute and the storm windows used as walls are pretty charming too. This was all done using three windows and some scrap lumber. Think of this project as an opportunity to clean up your garage or shed and to put some of the leftovers you’ve gathered to good use.

Let’s move on to some bigger greenhouses, the kind you can build in your garden or backyard and which look a bit more permanent and solid. There’s this great tutorial on instructables which explains how this amazing structure was built. If you want to put together something similar, you’ll need lots of 40 x 90 treated timber to build the frame. You’ll notice here that these greenhouse plans include a low single block wall which supports the frame. It’s an important element in the structural integrity of the project and we suggest you don’t skip this part.

A greenhouse makes sense when you’re passionate about your vegetable garden. It’s not something you use only during spring when you’re growing seeds but also during summer when you could keep tomatoes, peppers and cucumbers in there or in winter to offer some protection to certain plans. Worrying about the cost of building a greenhouse is pointless. As this inspiring project featured on instructables shows, you can find everything you need for free if you really want to. You’d have to gather some wood and some glass (or acrylic sheets) and the rest will follow.

It’s never really a bad time to build a greenhouse. Sure, it’s easier and more enjoyable to do this when it’s warm and nice outside but your plants could sure use the extra protection when it;s cold out too. In any case, we found some cool greenhouse plans on instructables and we really want to share them with you. This is the greenhouse you can build with them. To simplify the process, these are the main steps you need to follow: clearing and prepping the site, installing the sprinkler system (if needed), building the deck frame and adding a layer of rocks for drainage, covering the frame in wood and painting it, building the wall frame, then the roof frame and finally taking care of the details.

If you’d rather try something simple, like a cold frame, be sure to check out this great tutorial on savvygardening. It explains everything in detail and it’s really easy to follow. Here’s all you need: a saw (actually it would be nice to have a miter saw, a circular saw and also a Japaneze dozuki saw, ideally), a sander (or sandpaper), a drill, a tape measure and a straight edge. Use an old window as a lid/ roof.

It seems that using old windows to build greenhouses is common practice. Depending on the size of the windows and on how many you’ve gathered, you can come up with custom greenhouse plans for your garden. You can even mix and match different types of windows and use glass doors as well. Make a list of everything you have and start planning. There’s this really inspiring project on thegreenlever which shows how you can use diversity in your favor.

Our search for awesome greenhouse plans also led us to bowtospecialist where we found this tutorial. The greenhouse featured here looks great and isn’t exactly difficult to build. Here’s what you need: 6 meter long wooden posts (4×4), plastic strips, 6” long nails or screws, a lot of 2 1/2” screws (500 or so), film, a vent opener, a thermostat outlet, hunges and a latch. You should also have a saw and a hammer. Be sure to position the greenhouse in an area with lots of sunlight.

Old windows are excellent for making small greenhouses and you should definitely keep them if you ever plan on building something like this. You can actually make a greenhouse exclusively out of windows if you have enough of them. You can check out this one from lizmarieblog if you’re curious how a project like this would turn out.

And here’s another lovely greenhouse built out of reclaimed old windows. It’s quite small so it wouldn’t take up a lot of space in the garden or the backyard but it’s big enough for you to move around it. This one’s design is quite nice and simple with a modern overall look. The door is white and it contrasts with the green frame in a subtle but meaningful way. Check out the plans on gardentherapy.

If you want something a bit more robust, a greenhouse that can withstand harsh weather, it would be great to build a sturdy frame for it in the first place. It would also be good to use durable materials like metal. The entire bottom portion of this greenhouse from ana-white is clad in metal panels while the inner frame is built out of wood. This gives it a fairly industrial look.

Big greenhouses take up more time to build and to care for but they’re not necessarily more difficult to plan or to construct. Take this one for example. It’s quite simple both in appearance and design. It has a thin yet sturdy frame made out of wood and plastic sheeting all around it. As the plastic sheeting starts to melt in the hot sun ripples start to appear all across the greenhouse, giving it this distinctive look. You can find the plans for this project on theelliotthomestead along with the instructions.

Greenhouses can be quite huge but they can also be tiny too. This one for instance is super small and not exactly a greenhouse per se. It is however a very clever way of growing salad out in the garden when it’s still cold outside. The secret is an umbrella, one that’s clear and lets the light through and preferably that has rust-resistant parts since it will be left outside and exposed to the elements. Check out the tutorial for this clever project on gardentherapy for more details.

Speaking of tiny greenhouses, a terrarium is more or less the same thing. Here’s one that you can built from old picture frames and that even looks like an actual miniature greenhouse. It’s a lot of fun to put together and a really nice way of grouping up and displaying a bunch of plants or herbs in a window or even outside. You can check out countryliving to find out more about it.

If you already have a bunch of big planters in the garden it would be pretty easy to turn them all into mini greenhouses. Once again, you can use old windows to do this. Two of them can be placed at an angle, forming a sort of pitched roof for the planter which would act as the base and the walls of the greenhouse. Check out this cute project on norrfrid.

Another option, in case you’re not a fan of big planters and you prefer your garden plants directly into the ground, can be to use jars. That’s right, you can have jars placed over each plant, creating a sort of tiny personal greenhouse for it. The jars can be of different sizes. You could also use plastic bottles instead. Check out this idea on jenniferrizzo for additional details.

On the other hand, if you’re passionate about gardening and you want to be able to grow them and to expand your garden, a proper greenhouse might be just what you need. You can use it as a propagation chamber and equip it with a sink, storage and everything else you’ll need. You can find plans for such a structure on montanawildlifegardener.

The greenhouse is a tiny one with a cute gabled roof and a raised floor. It actually sits on a table that acts as a base and it’s made using reclaimed windows. It can all be made from scratch by following the plans and instructions offered on empressofdirt. You can alter the design based on the type of windows that are available to you.

Going back to planter beds, here’s a way to transform them into miniature greenhouses by adding a roof over each one. It would end up looking like a small tent. The frame can be made from rebar and PVC pipes.as the pipes bend you need to make them cross in the middle and to secure them with tape. Then made a cover over the frame out of some floating row-cover fabric, the kind that lets sun and water go through and keeps the plants inside comfortable and prevents them from freezing. You can find the detailed plans for this project on imqtpi.

Just in case a regular and basic greenhouse is looking a bit too simple and boring for your garden, how about a cool-looking dome with a geometric design? Making a geodome is a bit more challenging but definitely doable even as a DIY project. You can find the plans for one on northernhomestead. It has a lightweight frame made out of untreated spruce lumber and it’s covered with commercial greenhouse plastic.

Repurposing existing supplies and materials to build something new is always a great idea not just because it saves you money but also because it results in inspiring and unique projects. One of the craziest projects in that sense is this greenhouse that’s made from an old trampoline. The galvanized steel frame of the trampoline was combined with some extra piping and some wood to make the frame for this greenhouse, the plans for which you can find on howdoesshe.