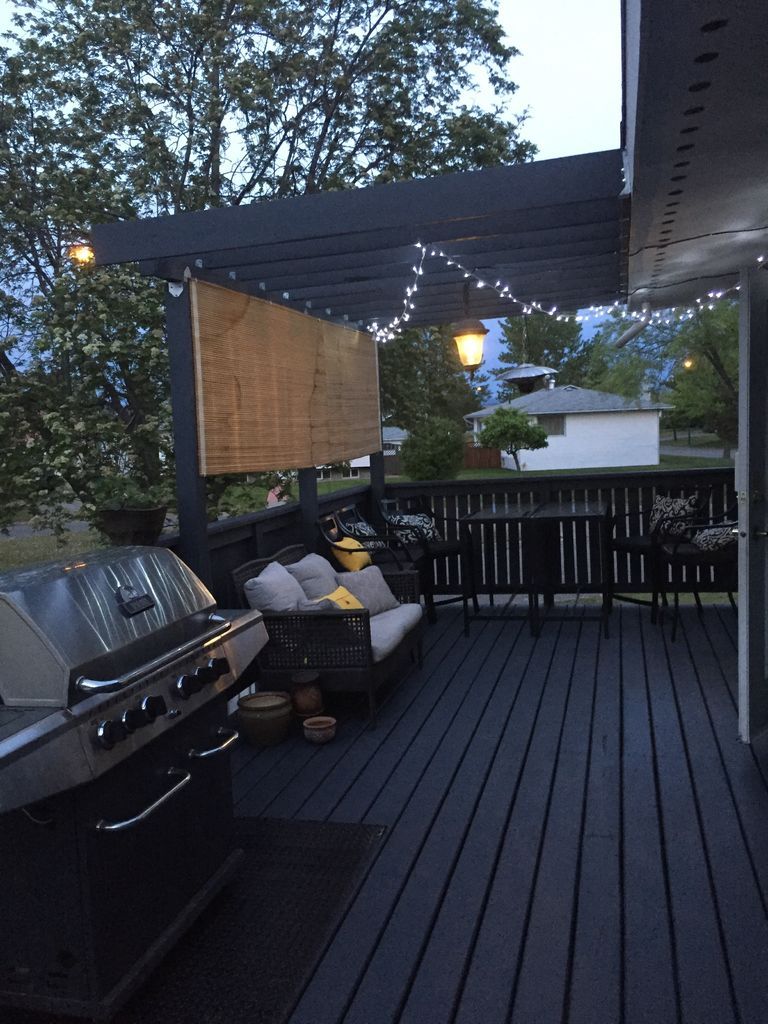 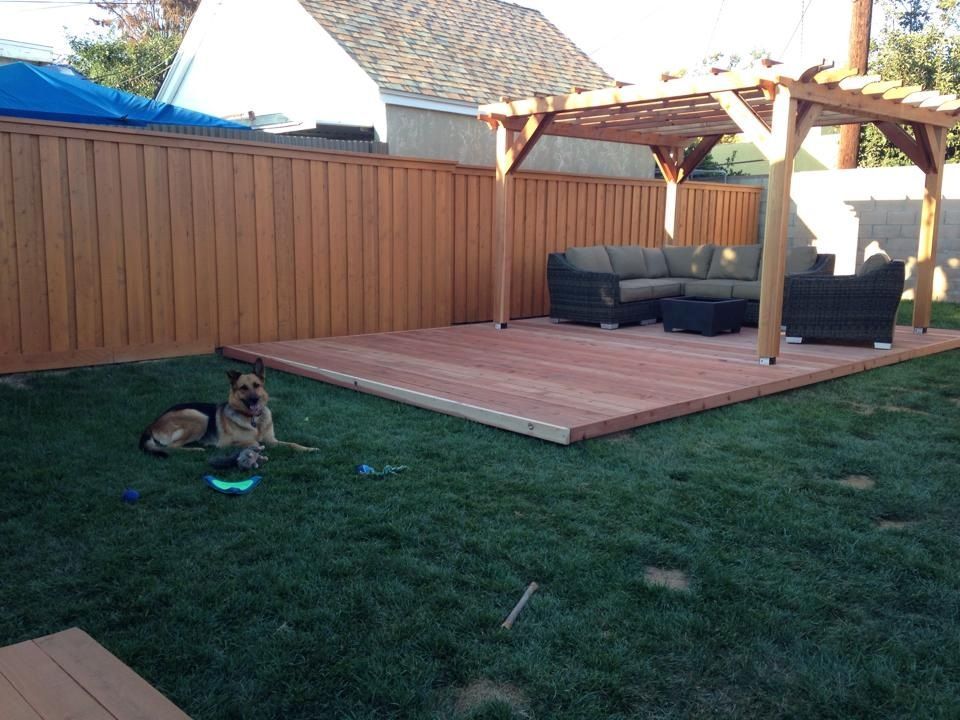 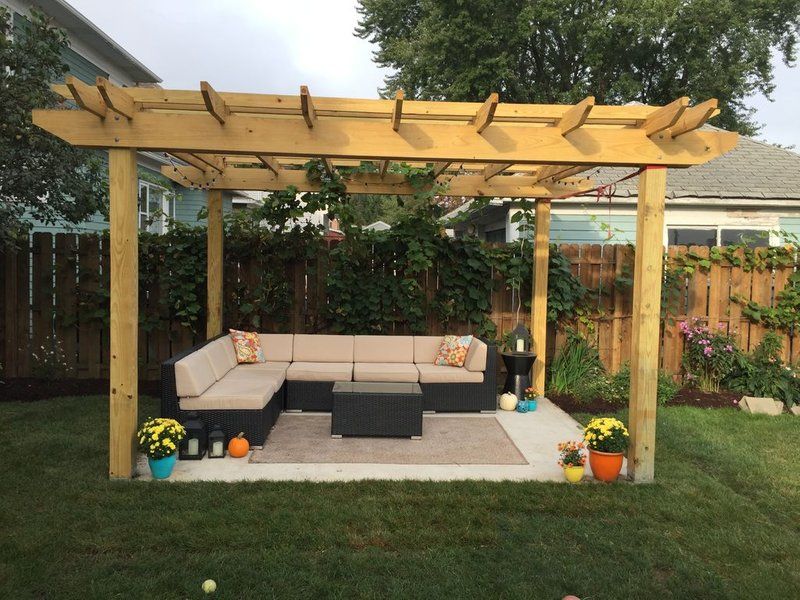 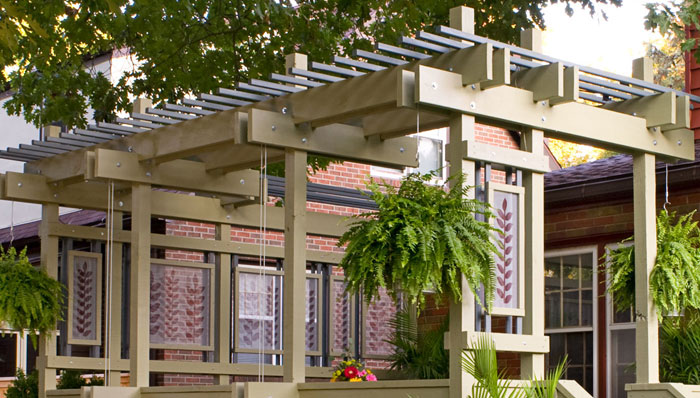 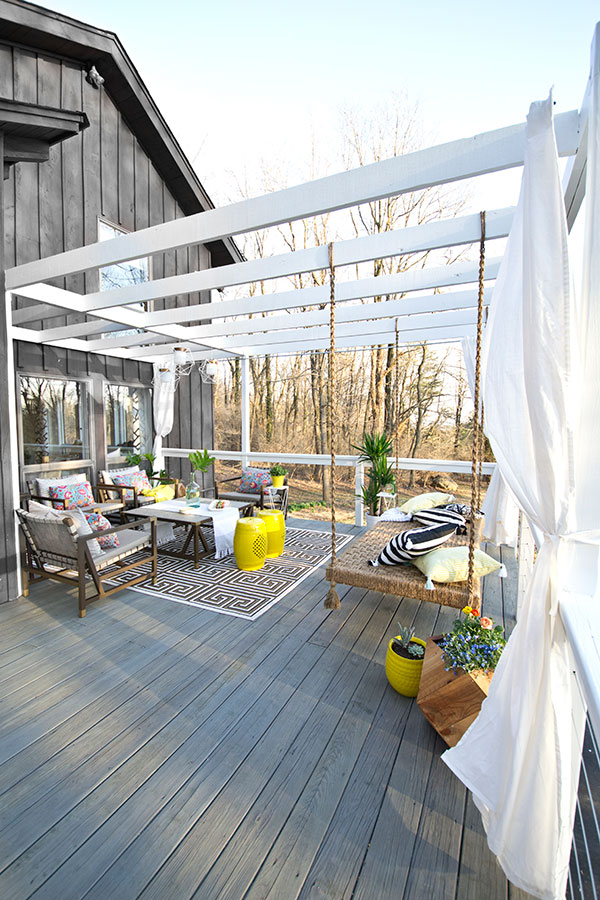 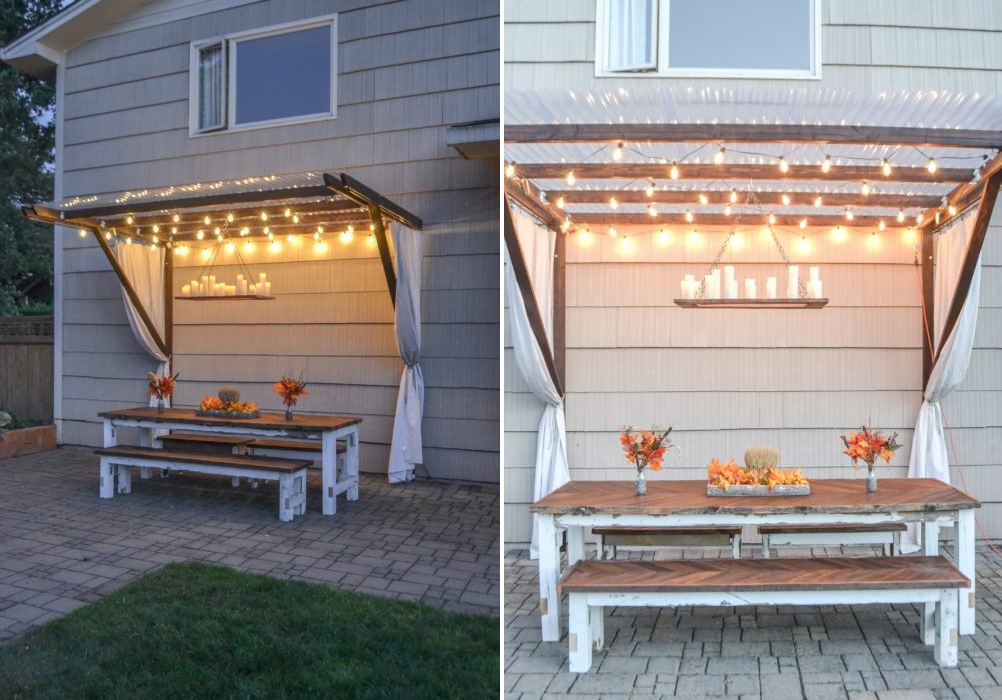 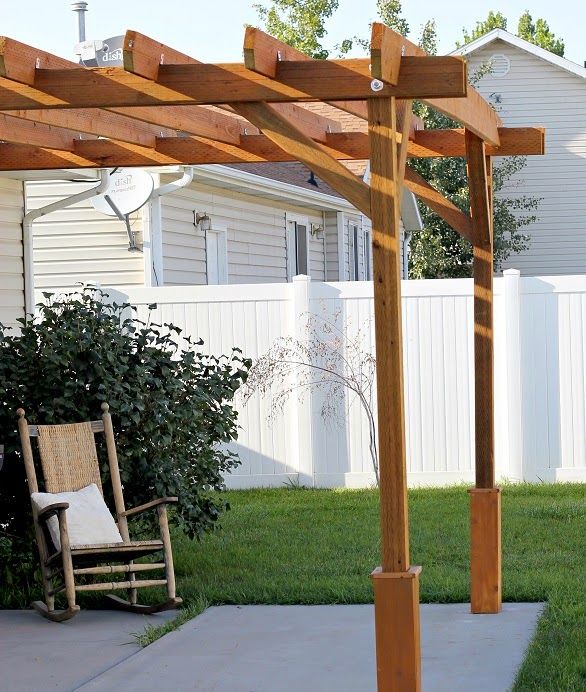 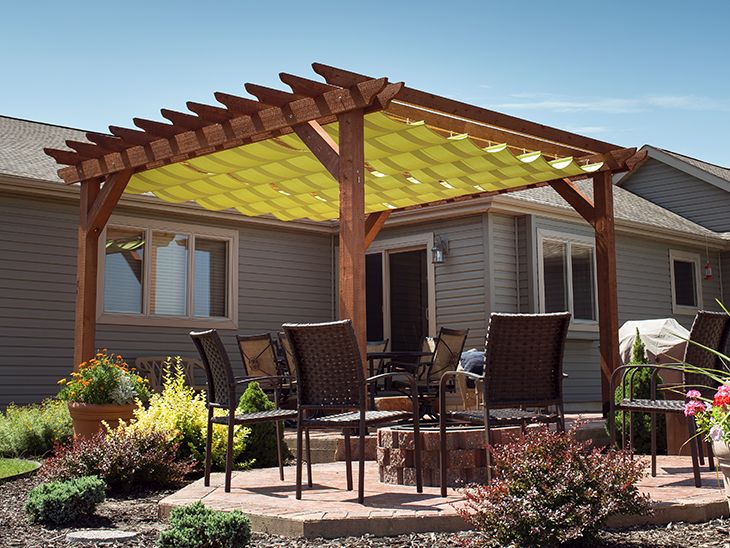 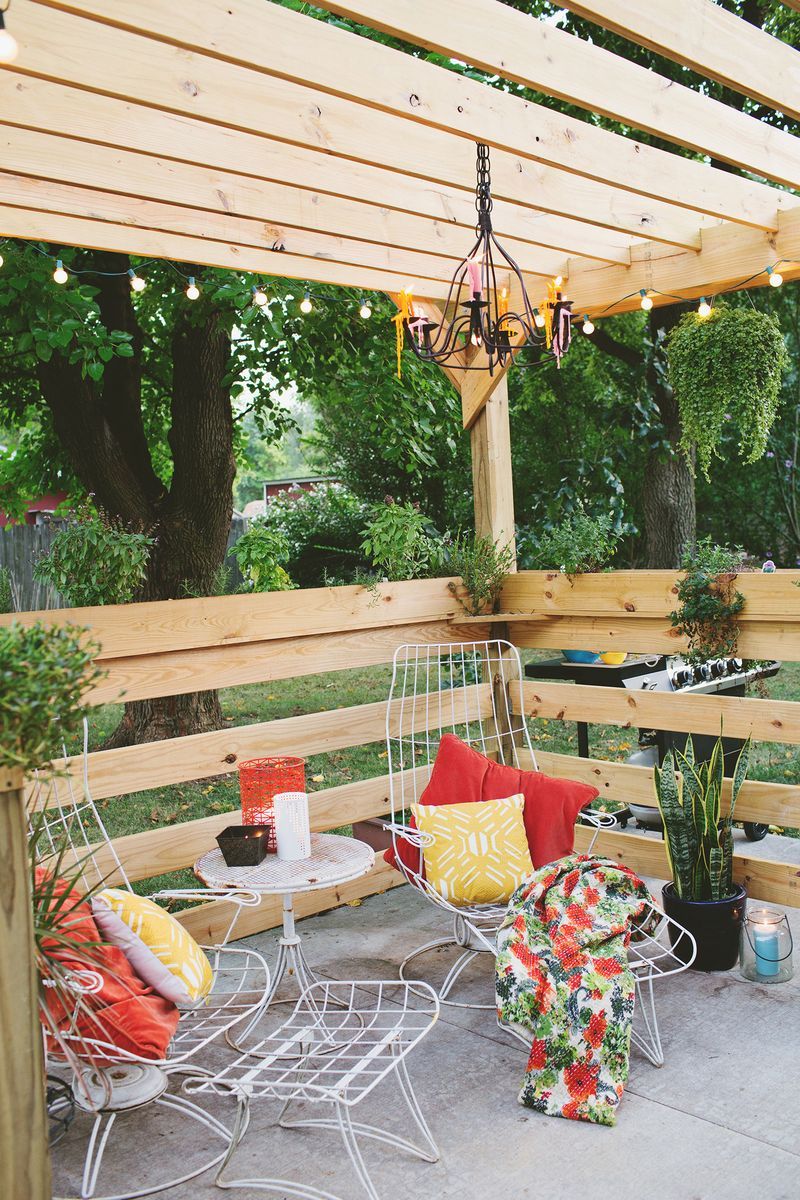 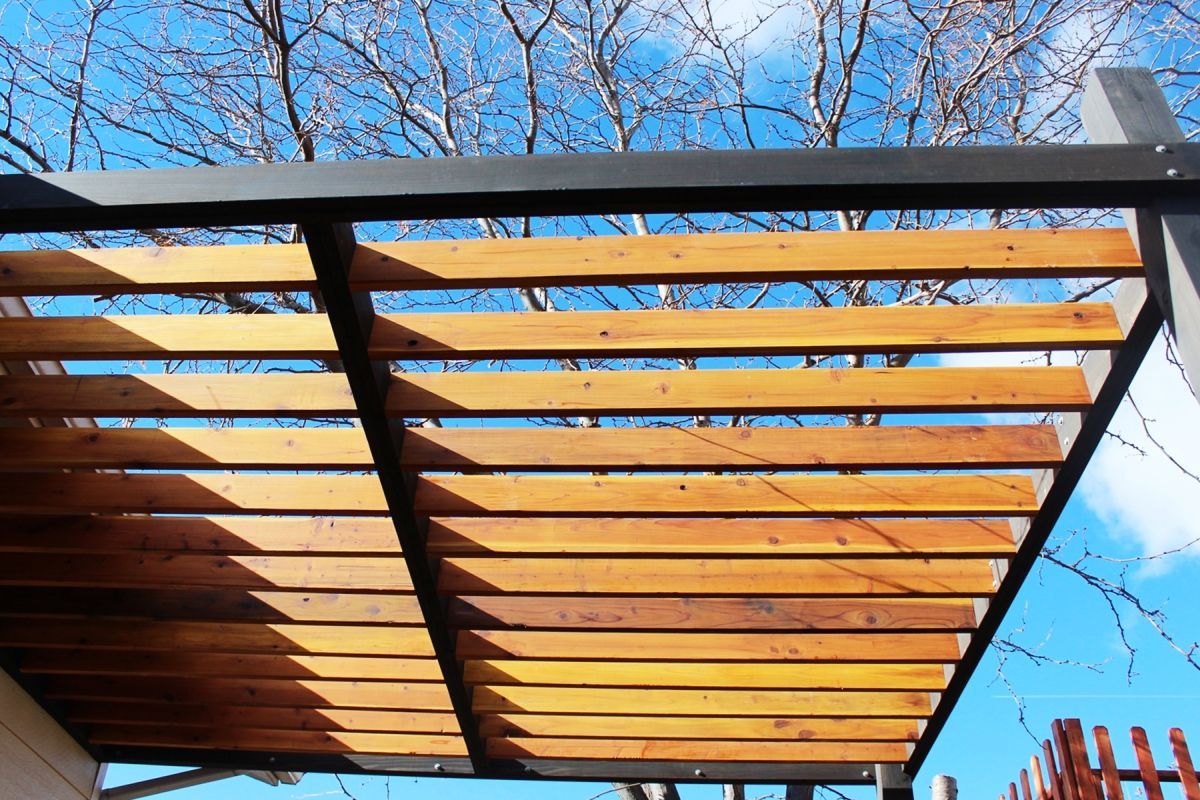 In case you’re not familiar with the specificities of this term, we’ll quickly go over the basic definition elements of a pergola. A pergola is a feature used mostly in gardens, made of vertical posts or pillars that usually support cross beams and an open lattice. The structure is sturdy but often looks delicate, lightweight and bohemian, especially when vines and climbing plants and trained to grow on it, forming a shaded sitting area or walkway. Now that you know what a pergola is, how about we show you how to build one? We’ve prepared some pergola plans for you to have a look at in the hopes that we can inspire you to start a DIY project.

Building a pergola is not overly complicated…after all, why should it? We’ll start by saying that we highly recommend installing steel brackets on the posts as opposed to installing the posts into holes filled with quick-set concrete. This method is less expensive and gives the pergola better height overall. As far as everything else, there’s a lot of sanding, staining and drilling involved. The first step according to these modern pergola plans is building a frame which is attached to the side of an existing structure )usually the house). Once the frame is in place, the rafters are installed. After that it’s all pretty much done but we recommend also installing caps on the posts to ensure the longevity of the structure.

When it comes to pergola plans and designs, there are numerous variations which can result in different possible designs. One options, for example, is to build an enclosed pergola which basically has guard rails on one or more sides which delineate its perimeter and ensure an overall cozy and intimate ambiance which is perfect for a sitting area. If this is the type of pergola you’d be interested in building, check out Abeautifulmess for inspiration.

One of the greatest things about a pergola is the fact that you can train vines and plants to climb on its pillars and to cover the lattice, creating a fresh and shaded area underneath. However, if you’d like to enjoy the shade without the vines, you could create a canopy using wire and outdoor fabric. You could create shades which can be open or closed using a rope pulley system. Wouldn’t that be cool? You can find the plans for that on sailrite.

As mentioned on myfrugaladventures, a pergola is one of those projects that seems more complicated and difficult than it actually is. With that in mind, we hope these pergola plans can inspire you to build your own structure from scratch. All it takes is a simple but well thought through design, some basic tools and DIY skills and the time to complete the project. It should take you around 2 days to have this done. Check out the full description of the project for more details.

Considering the overall difficulty of the project as well as the amount of  time and effort required for each step, building a pergola shouldn’t take more than a weekend. It’s a perfect project for the start of spring or summer. A pergola is also a wonderful structure for outlining an outdoor lounge area with and for making a patio or a deck look and feel complete and welcoming overall. Do you like this simple design? You can find out more about it on natalieleahandjosh.

The overall dimensions and proportions of the pergola can be chosen based on existing structures such as a patio or a deck or in accordance with the setting you wish to create. The pergola plans shared on thecreatedhome are specifically designed to suit a small outdoor sitting/ dining area. The string lights and the curtains on the sides are a nice touch and so is that cool chandelier with pillar candles instead of light bulbs.

This design shared on the homedepot blog shows a sort of hybrid between a wooden deck and a pergola. Basically the pergola blends into the deck’s guard rails at the base and is attached to the side of the house at the top, forming a sort of open cover that gives a sense of increased intimacy and comfort. The curtains are a nice addition. They can enclose the space even more if needed and they’re also useful for blocking the sunlight.

This is a pergola with plant hangers as opposed to vines. As you’ve probably assumed based on its look, the structure is very strong and sturdy. The lattice at the top, however, adds a delicate and lightweight character to the whole project. The suggestion offered on lowes is to dig and pour concrete footings beneath each post as an alternative to burying the posts. One the frame is in place, most of the project is basically done. Stain or paint the wood to match your deck or to complement the landscape.

If you want to build a backyard pergola in an area previously covered in grass, the first step should be defining the limits, establishing the perimeter and creating the flooring which can be poured concrete, wood, gravel, crushed stone, etc. You can use the pergola plans shared on Instructables as a reference point since they actually guide you through the entire process, from start to finish.

A pergola can completely transform a backyard, especially if there are no other big structures out there. You can use this opportunity to also build a deck. It could be a two-in-one project and you could use the pergola plans featured on Instructables. One of the first steps and the most important one after creating the plan is to take all the measurements correctly. Also, be sure to include all the features and accessories into the design right from the start.

There’s also the matter of the materials and finishes used when building a pergola and this is also something that needs to be decide in the planning phase. One idea is to use reclaimed wood. In case you’re curious how such a project would look like, check out these plans we found on Instructables. The reclaimed wood gives the deck and the pergola plenty of character plus it helps to keep the cost of the project low.