Art is one of the best defining elements of someone’s home style, and it is critical in design. I’d go so far as to say art in some form or another is essential for finishing off the decoration of a space. Large pieces of art can come at a price, however, which is why a great idea for DIY wall art is always appreciated. This DIY Sharpie painting art on canvas is one of my favorites, and it took all of a part-afternoon to complete.

The loosely sketched personalized cityscape on canvas is versatile for any room – the living room, bedroom, even (where I wanted it to go) a bathroom.

If you feel like you have two left hands, so to speak, when it comes to art, don’t worry. That’s the beauty of a loose sketch – it’s intentionally kept imperfect. And I’ll show you the step-by-step process for creating your own cityscape art piece.

You may want to find a picture of a cityscape that you like, to serve as your jumping off point. (Feel free to use one from this tutorial, if you’d like.) Make a brief starting sketch on scratch paper to get your bearings, style, and proportion. I had an idea of the cityscape I wanted, but I wanted to customize it with some local additions (such as our local university’s “A” tower and a local temple), so quickly sketching their placement in the overall cityscape was important to make sure it would look the way I wanted.

Start by lightly sketching the first building, located nearest the bottom center point on your canvas. Be sure to sketch lightly so you’re not stretching or damaging your canvas, as well as so you don’t have a ton of extra pencil markings later on. Unless you like that raw/unfinished look, which I kind of do.

Sketch the outline of an adjacent building to your first building. I recommend, at this point, sketching mainly the outlines of the buildings, and then one or two detailing bits that will remind you what the building will look like. Maybe a single row of windows at this point, even though eventually you’ll be covering the whole building in windows. It’s more to help you visualize than anything else at this point.

Sketch the outlines of a couple more buildings around the back and other side of your center (first) building. It should now be surrounded in a little urban community of sorts. This helps you to really nail down your proportion and style.

I found it useful to establish scale and style that would work consistently throughout the canvas by, at this point, working upward from center for a few buildings. This way, my reference point was never very far away. (This, as opposed to sketching one side of the canvas, then moving toward the other side. By the time you get to the other side, your scale may have shifted significantly smaller, larger, or even leaning-er without your even noticing.)

With the center of the city more or less established, I then moved to one side. Sketching from the bottom (“front” of the city) toward the top was useful in visualizing the buildings. A tip on sketching: keep a loose grip on your pencil. Remember to sketch lightly. Every once in a while, but not predictably every time, make a line that’s supposed to be straight a little curved, or even slanting. Add in a wiggle or wobble here and there.

Continue your sketching, adding in those details on each building that will let you know what the building will look like later but not wasting a lot of time on the pencil detailing. That can easily be done with Sharpie later on. But it’s nice to be able to see, for example, that Building X already has vertical lines about an inch apart, so its adjacent building can go more checkerboard-y or even have windows.

When the first side is nearly complete (I saved the last row or two of smaller buildings, meant to be background, to do later), move on to the other side of center. Every so often, take a step back to see how the balance is working overall; are both sides similarly light/dark? Busy/vacant? Narrow/wide? Tall/short? Don’t be symmetrical or predictable, but do make sure there’s some kind of visual balance throughout your cityscape.

When both sides are complete at about 3/4 of the cityscape level, work across the entire back row to incorporate your cityscape finishing buildings. These, being “far away” visually speaking, should be smaller. I like the idea of tower points as the punctuation marks in the background, so I made sure to include multiple small towers with spires or whatever back there.

This picture loosely depicts the order of operations for sketching out the sections of the cityscape, moving from section 1 through section 6. You might find yourself feeling comfortable going a different route, and that’s fine. But this is the way I found the most success.

Now comes the fun part: the Sharpie. Again, keep the point of your Sharpie light on the canvas, so it doesn’t deform or stretch the canvas. Using your pencil sketchings as guides, start making your cityscape permanent.

I found it easy to lightly sketch the outline of a building and then the details of that building. Then I’d go back over certain components of the Sharpie to add in that perfectly imperfect sketchy style. I recommend changing up the way you draw things as you go. For example, if you generally draw your windows in a clockwise way, do a couple that way then start at a different corner for the third window and draw it. The end result will be delightfully random and free.

The same goes for lines or any kind of pattern on a building. Draw some lines going down, some lines going up, and some lines starting in the middle and then finishing in a second stroke. Whatever it takes to keep your cityscape art from taking itself too seriously. Also, I recommend elevating your entire hand off the canvas as you draw for several reasons: (1) it gives you a little less control, which means better sketch appeal, (2) it gives you perspective on the stuff that’s around whatever it is you’re drawing at that time, and (3) it keeps your hand from smearing whatever’s already drawn.

Follow roughly the same pattern in completing your Sharpie work as you did originally. I found it best to work in “communities” within the city.

When possible, incorporate some variation among the stereotypically right-angled nature of city buildings. Add in some domes, a couple towers/turrets, I think I even threw a satellite dish on the top of one building, just to add some curves.

This is an illustration of the difference a secondary sketching adds. On these two windows, I’ve drawn their light primary outline.

Here, I’ve added in just a few random secondary lines over top of the primary ones. I never want to get out of control and make one part of the building or city super dark, so I tried not to just draw a second line directly over top of the first. Rather, my secondary lines were slightly off the primary ones; they added or detracted to the “real” shape of the building or detail.

Here, you can see the two windows have much more personality than they did with just the original outline, even though they’re not significantly different.

Also, you should note that, even though you’re being careful, it’s possible your Sharpie might slip and make an errant marking on your cityscape. Mine did. That’s okay. Simply alter the design or detailing in that particular place to cover it up. This diagonal mark became invisible as a window. That’s one beauty of sketching loosely in this way – everything looks intentionally imperfect.

When you’re done, stand back and admire your handiwork. I hope you love it! I loved mine. You can be done at this point, or you can add a little bit of colorful detailing, which is what I chose to do.

Grab a yellow Sharpie (or whatever color of whatever permanent marker you want and have available).

You’re now going to completely embrace the randomness that is this canvas wall art and fill in bits and pieces of the city to be yellow.

Be sure to color individual sections, well, individually. The yellow marker tends to bleed out the black marker into a sort of yucky greyishness if you color on the black lines. I found this to be the case even after I’d let the black dry a while. So I just carefully kept to the very inside of each black line.

This is definitely an exercise that requires your pausing and standing back to see where the balance of yellow should strike. I wish there was a method that I used and could share with you about how to choose what to color yellow and what to leave white. Ultimately, I wanted this cityscape to be black and white. The yellow just adds a subtle third dimension. Keeping that in mind was helpful in maintaining a restrained yellow marker.

When all the marker has been completed and dried and pencil markings have been erased to the extent possible (ditto on erasing only in the white spots, not smearing the eraser across black marker lines), you may or may not want to spray a clear coating onto your piece. I chose Krylon’s clear spray in flat.

Working in very light strokes with just the slightest bit of overlap, and spraying side to side, I coated the picture three times (allowing drying times of 10 minutes between each light coat).

Let your picture dry completely, for at least an hour.

Here’s a closeup of part of the cityscape on the canvas.

Some ideas for varying the detail and outlines of buildings.

You can see the building spires in the background of the cityscape here. It lends a nice finishing silhouette to the cityscape.

You can hang the canvas however you want. I find it easiest for these large, lightweight art pieces to use 3M command strips.

I used four sets of mounting strips, at the positions shown by the arrows in this picture. Two in the top corners and two more about 1/4 of the way up the sides.

Here you have it. Mounted on a large empty wall above the toilet in a bathroom. It gets plenty of natural light from a large window in this tiny bathroom.

I like the way the cityscape adds brightness but a semi-urban feel to this dark bathroom. It’s a small space, so the artwork needed to be somewhat simple but interesting. I think this piece nails it on both counts.

The tiny pops of yellow throughout the cityscape give it a little personality and a punch of color in the bathroom. You may want to opt for a different color, depending on your existing wall color.

(If you’re into DIY bathroom projects, consider making your own brass branch light or brass toilet\ paper holder, as shown in this bathroom.) 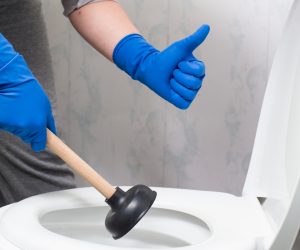 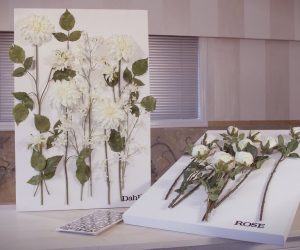 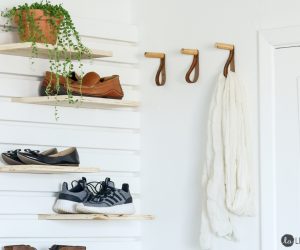 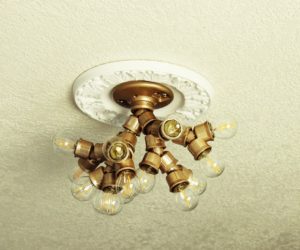 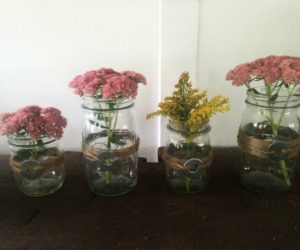