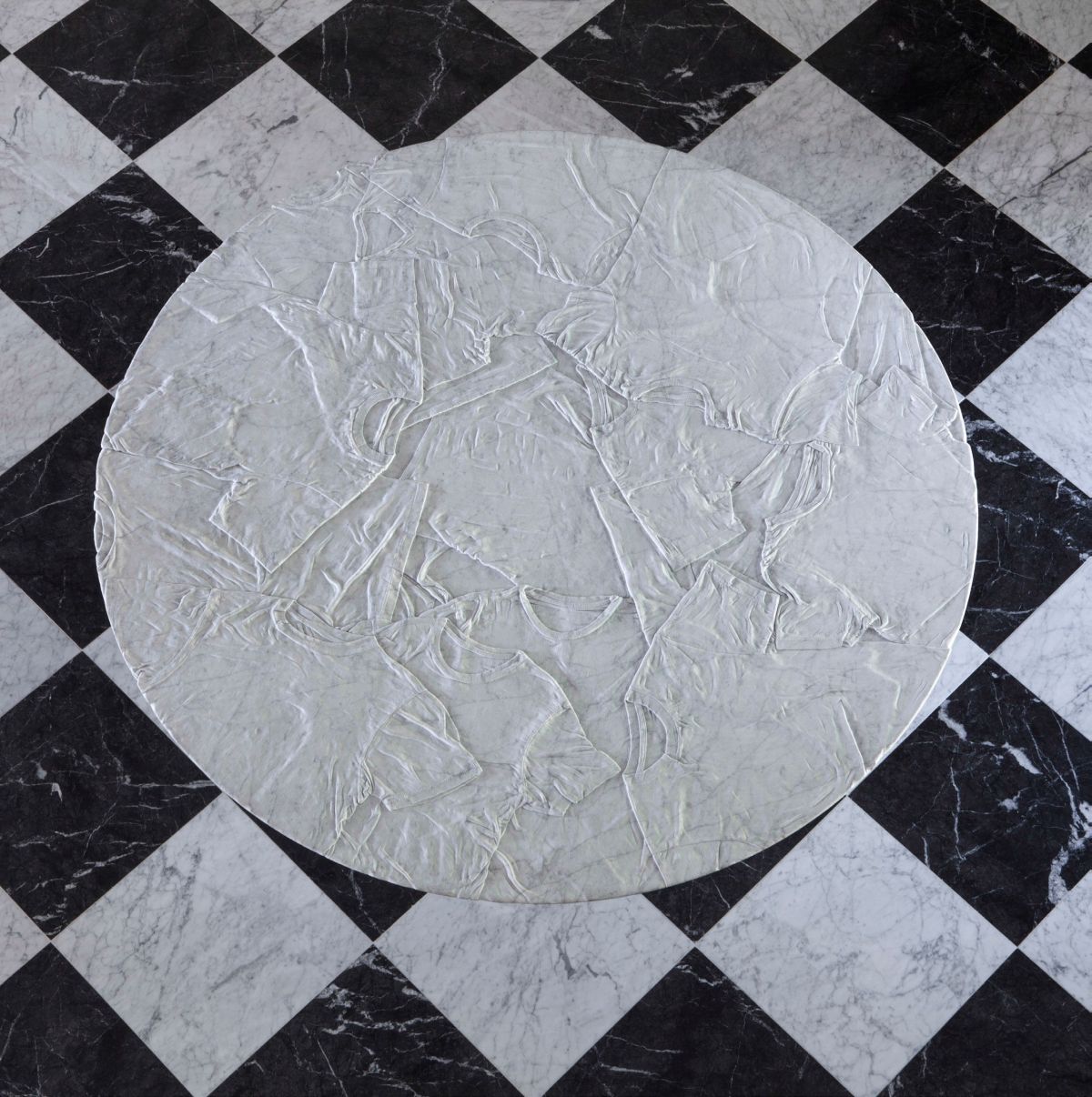 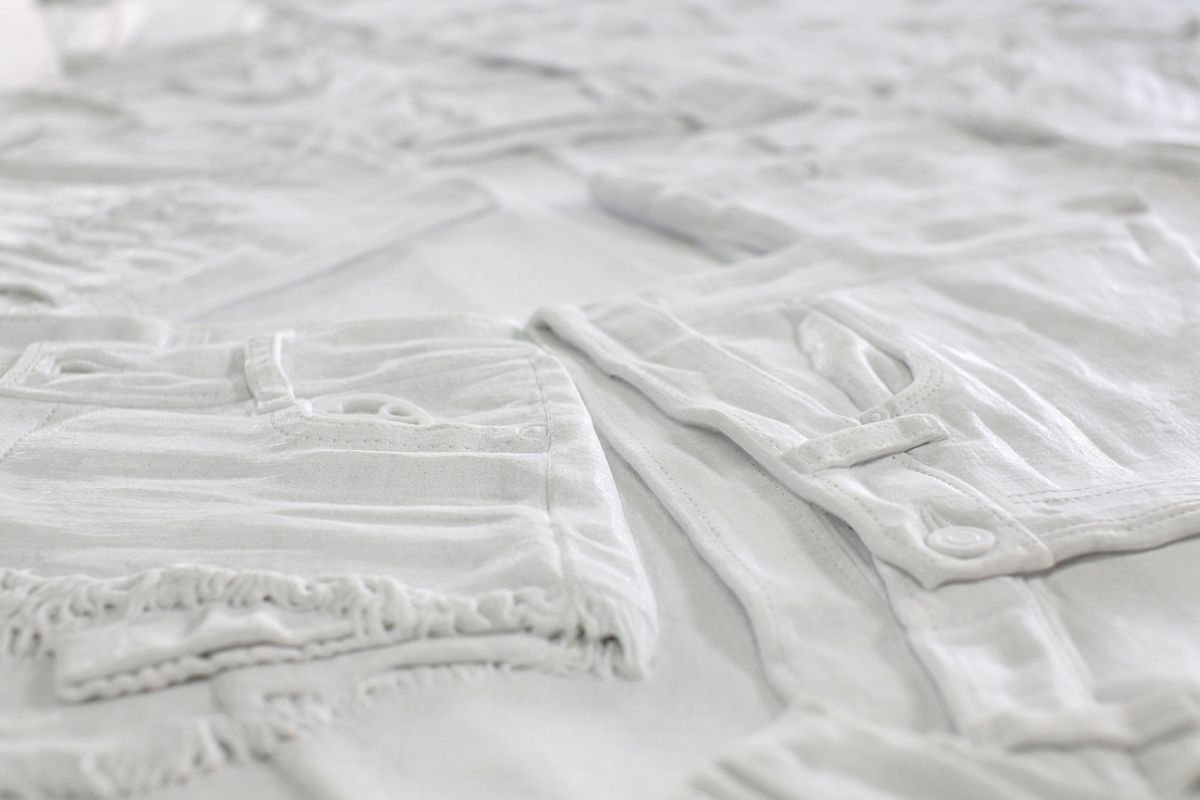 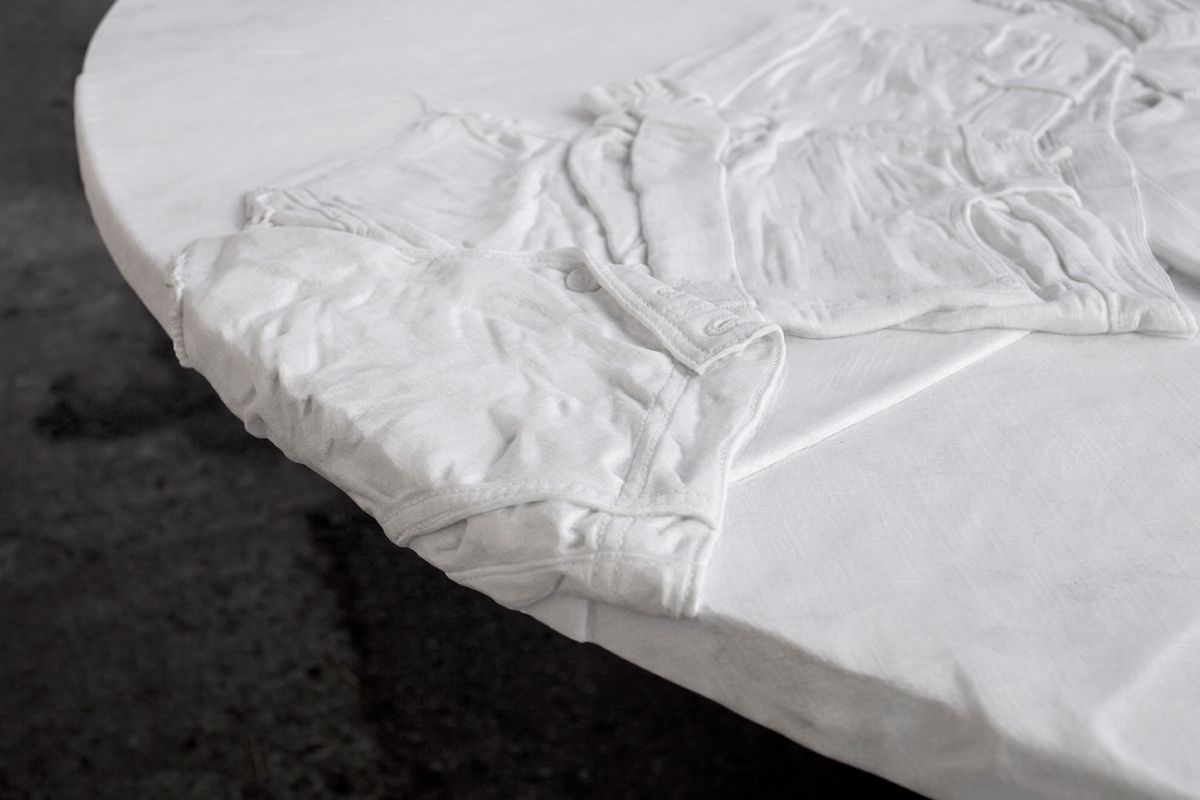 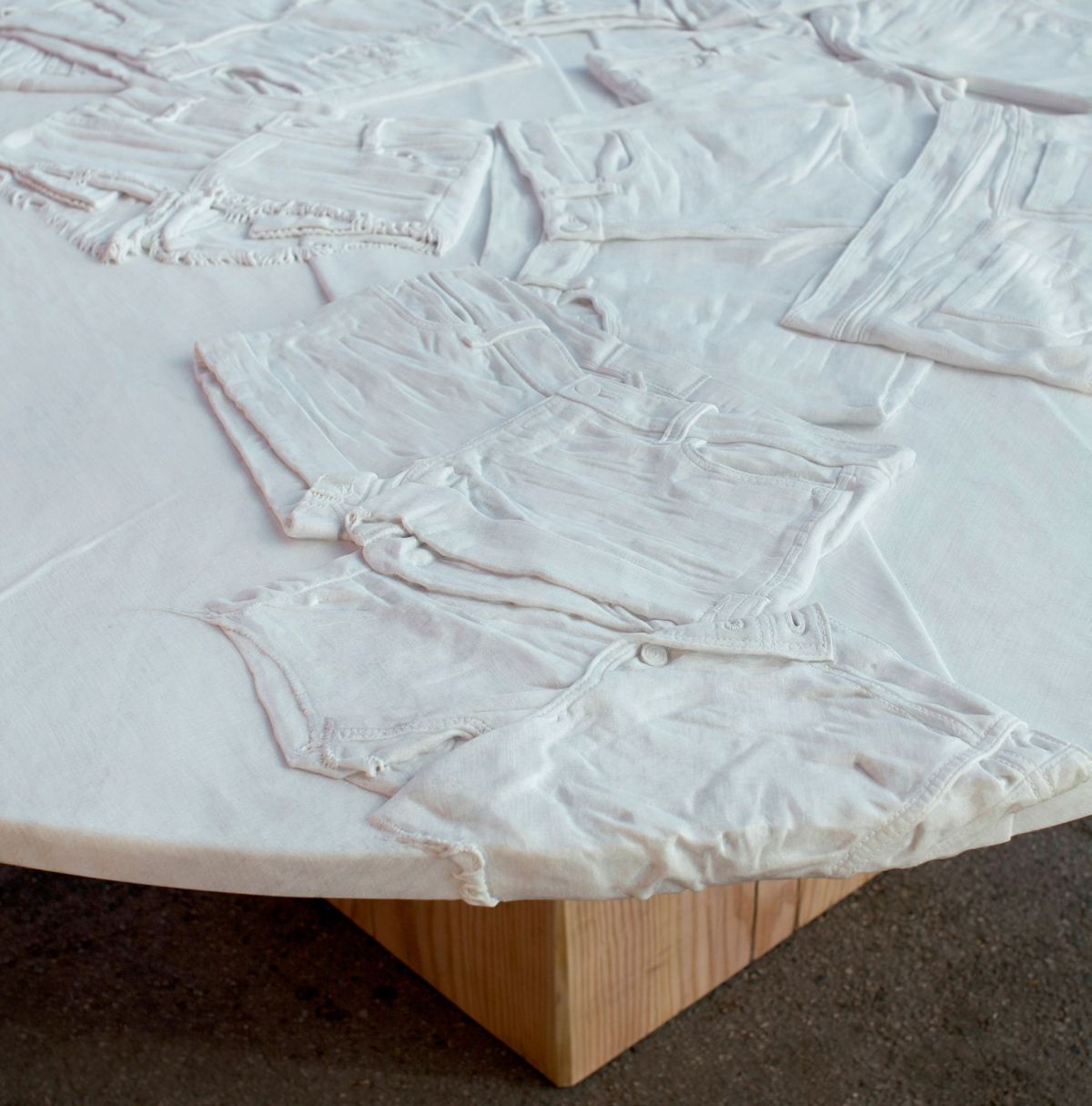 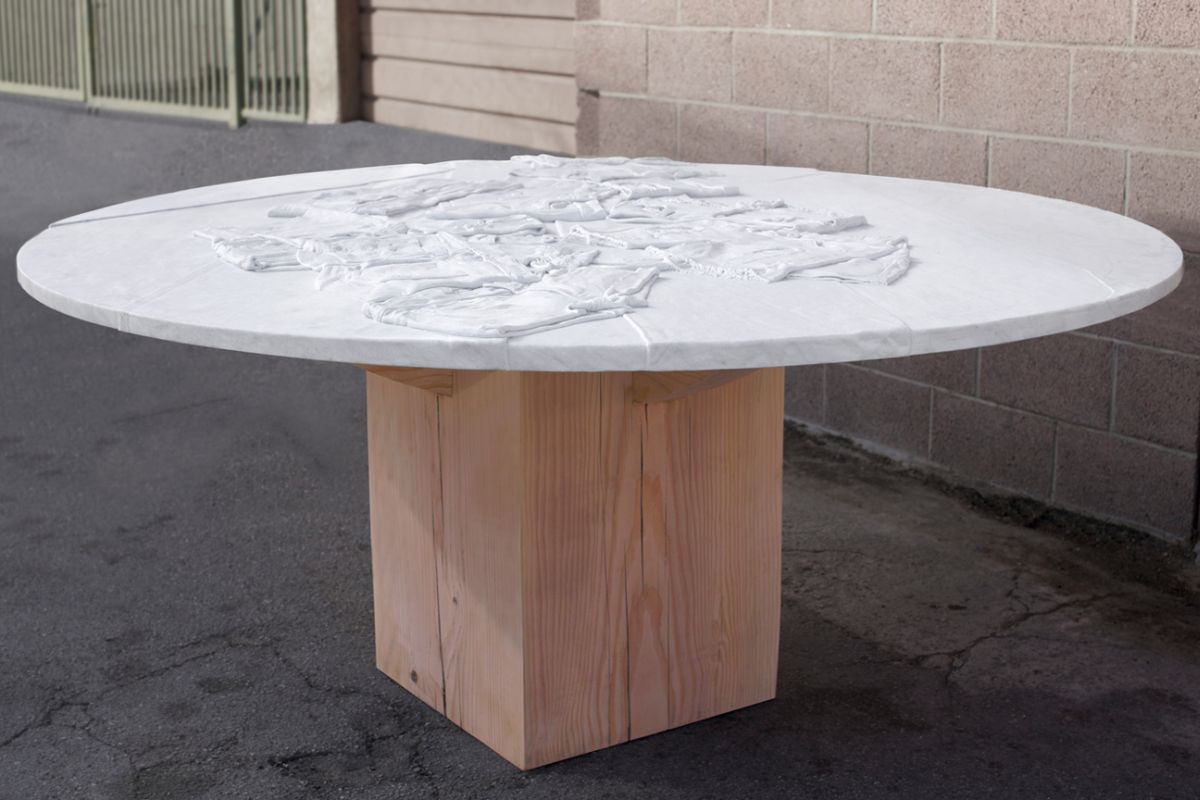 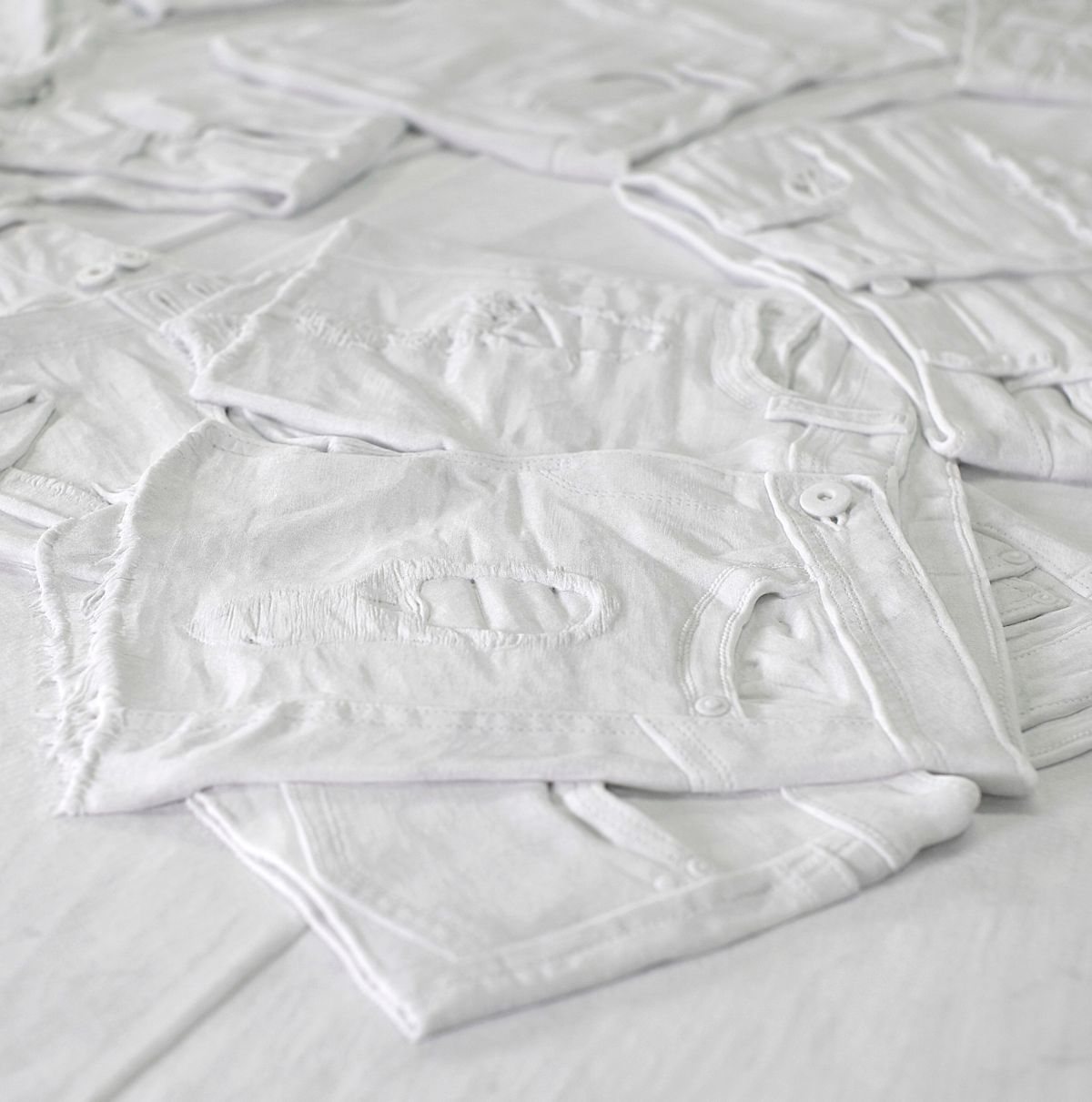 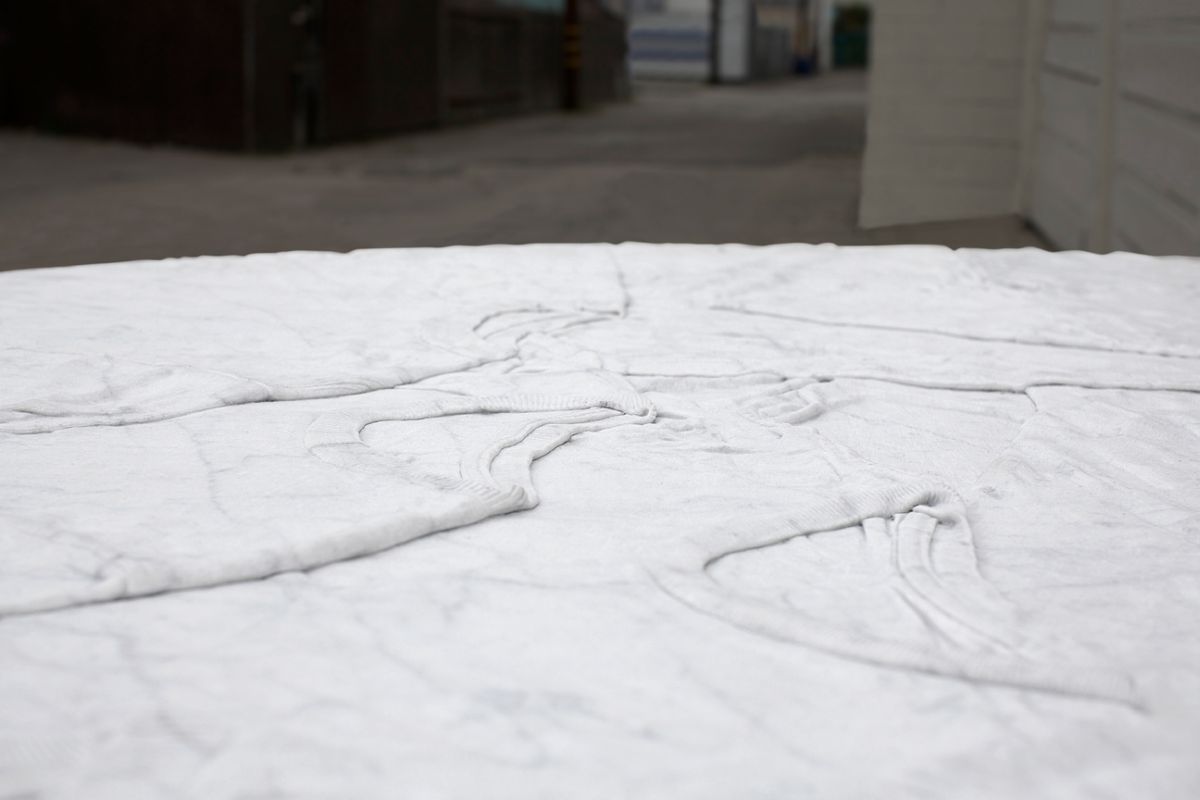 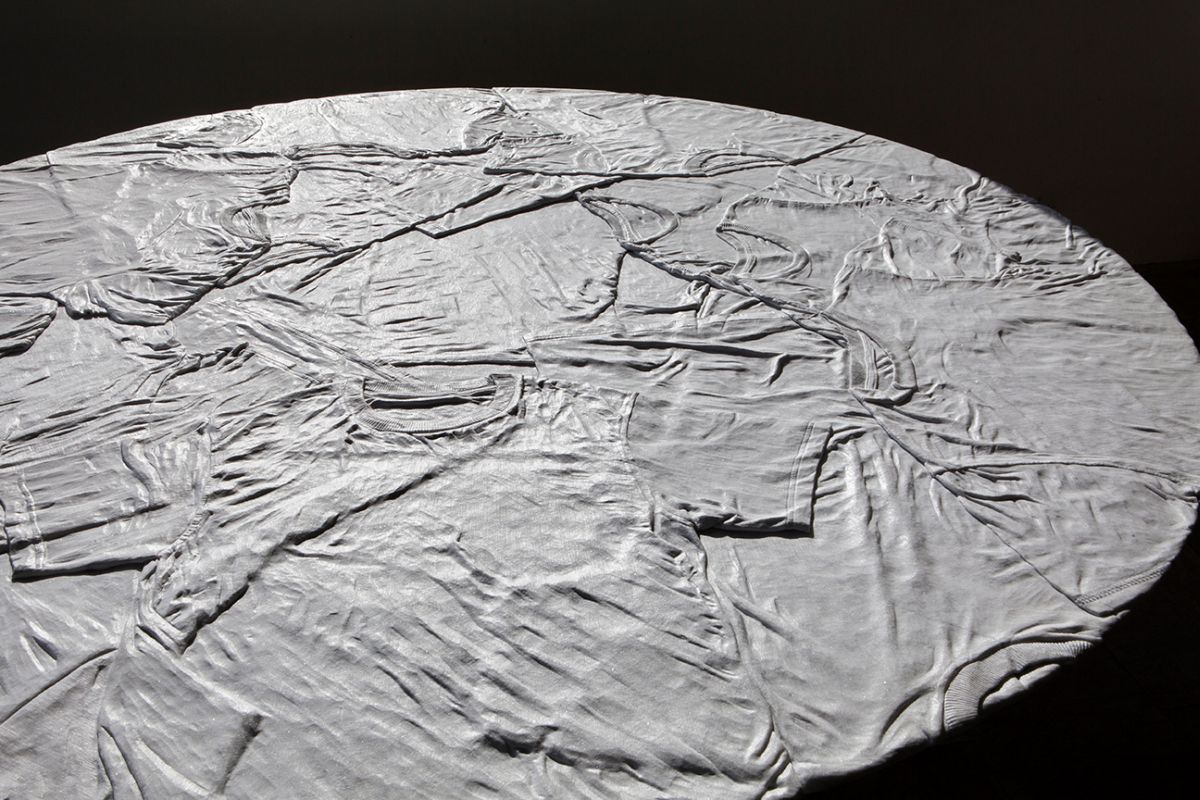 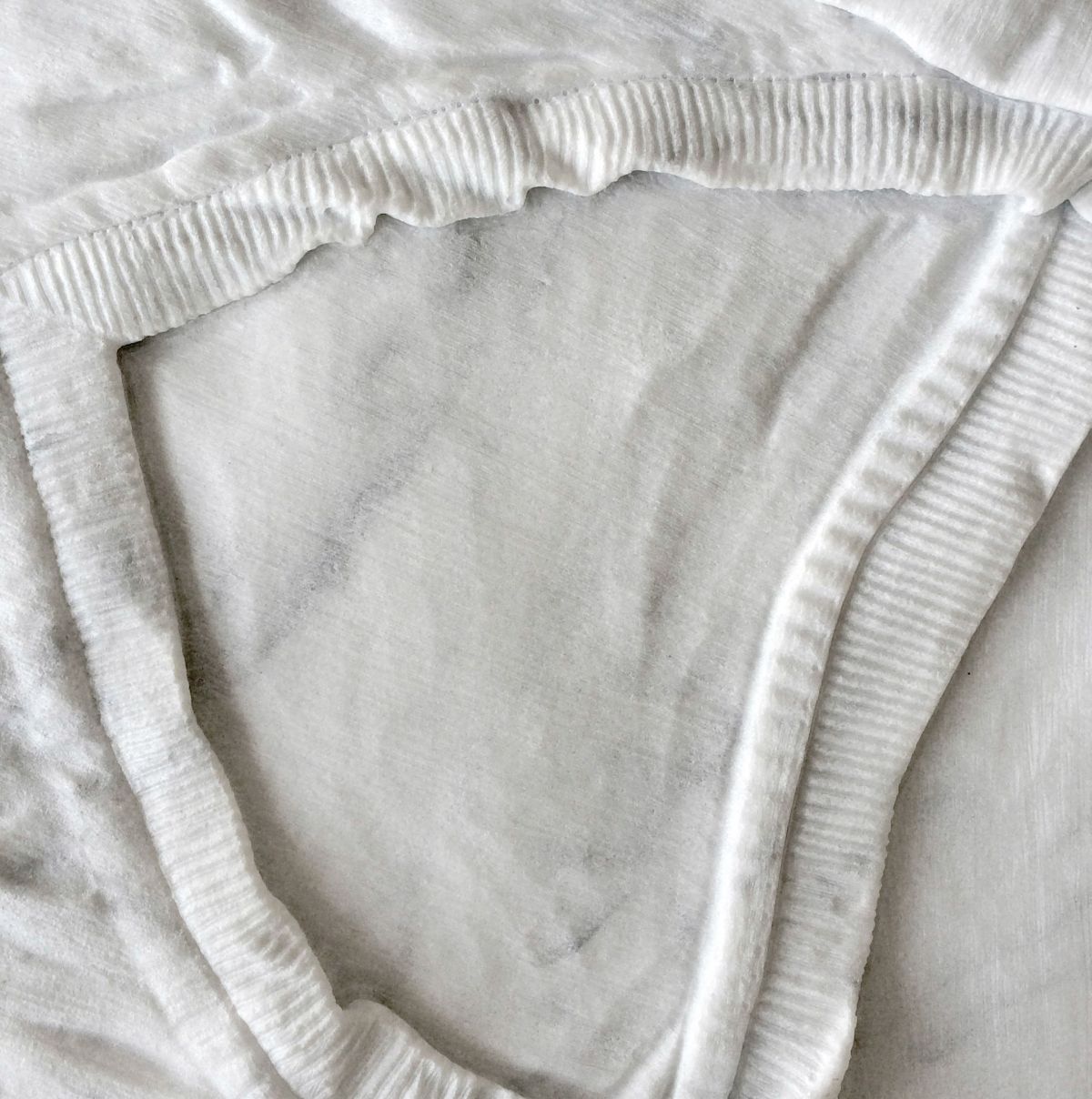 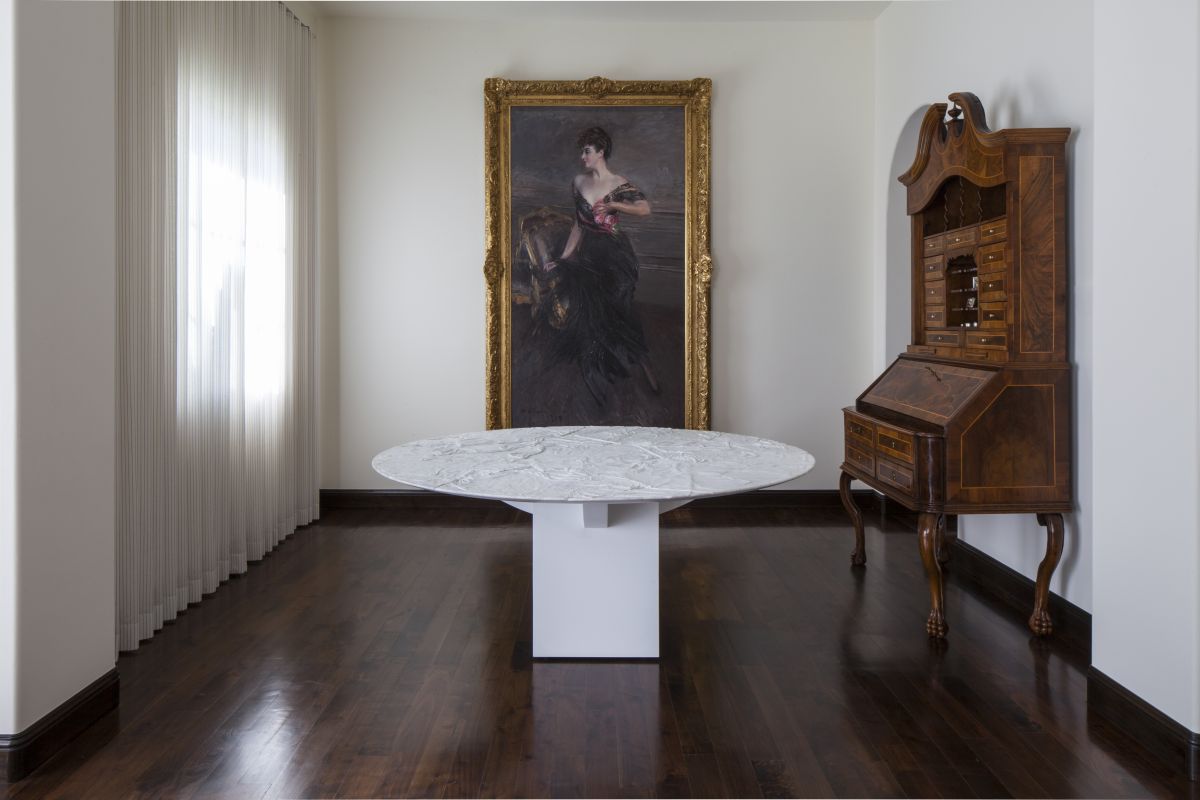 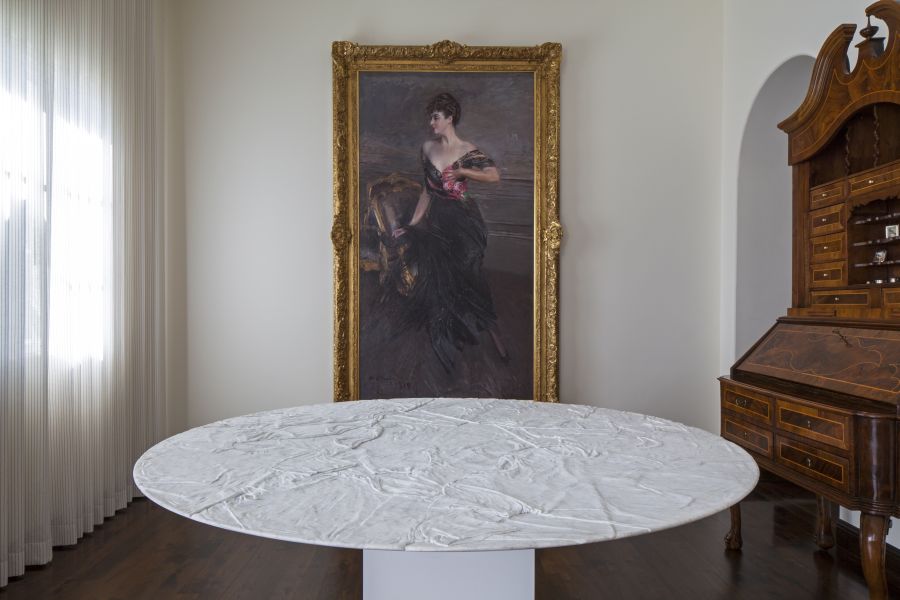 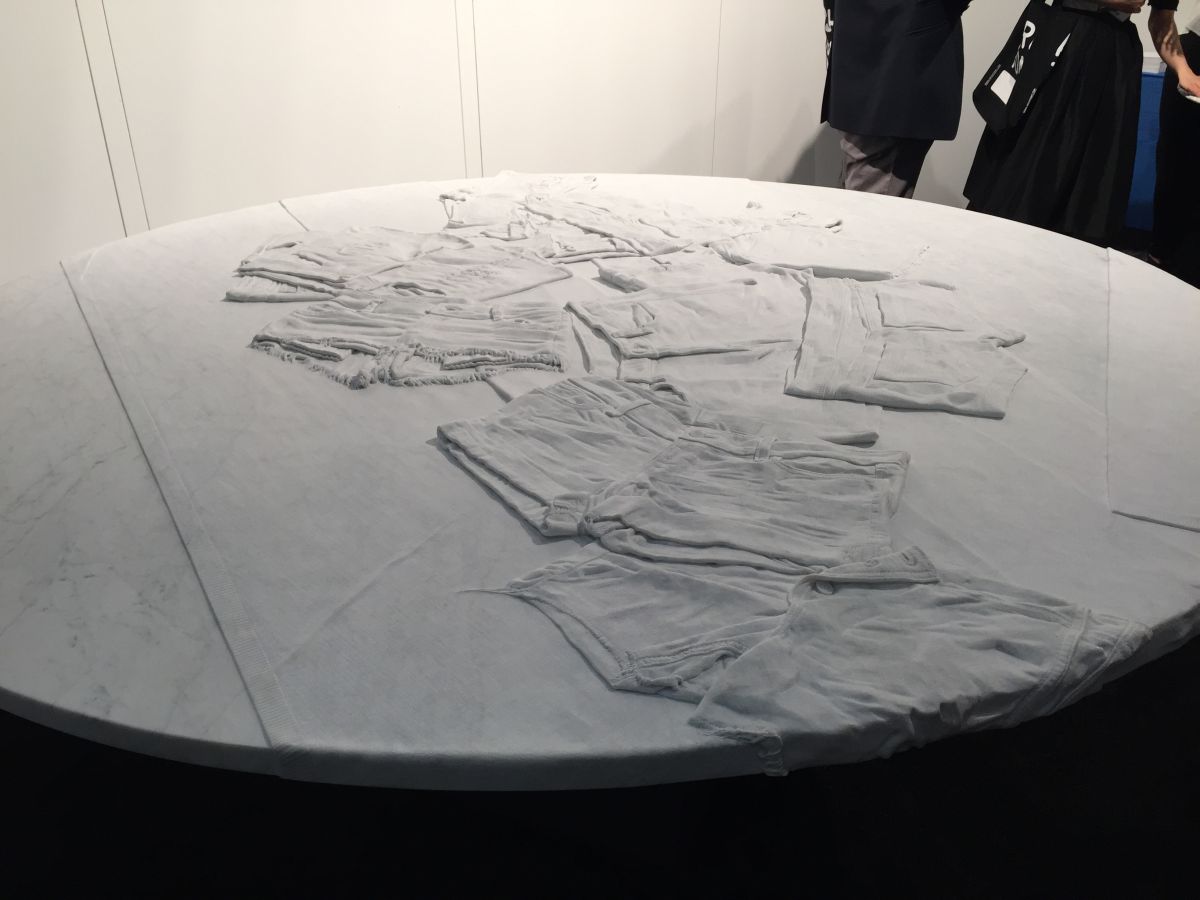 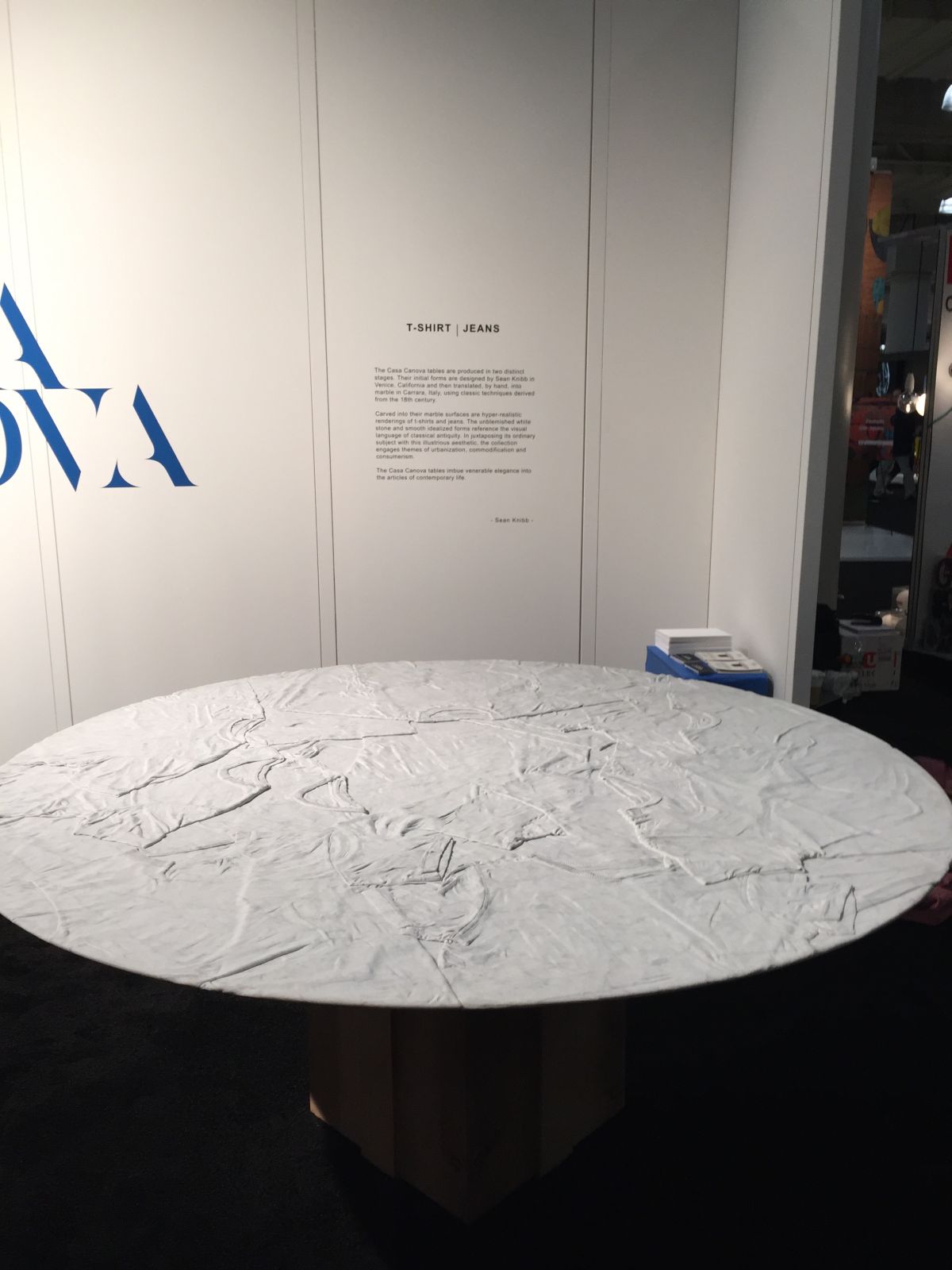 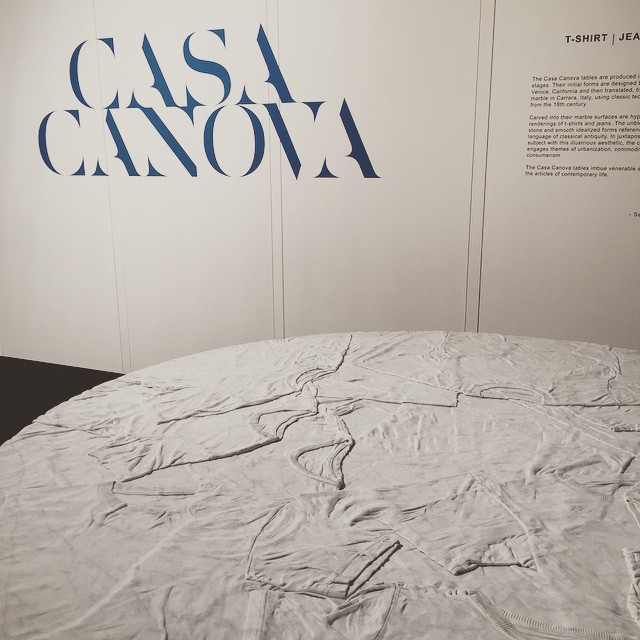 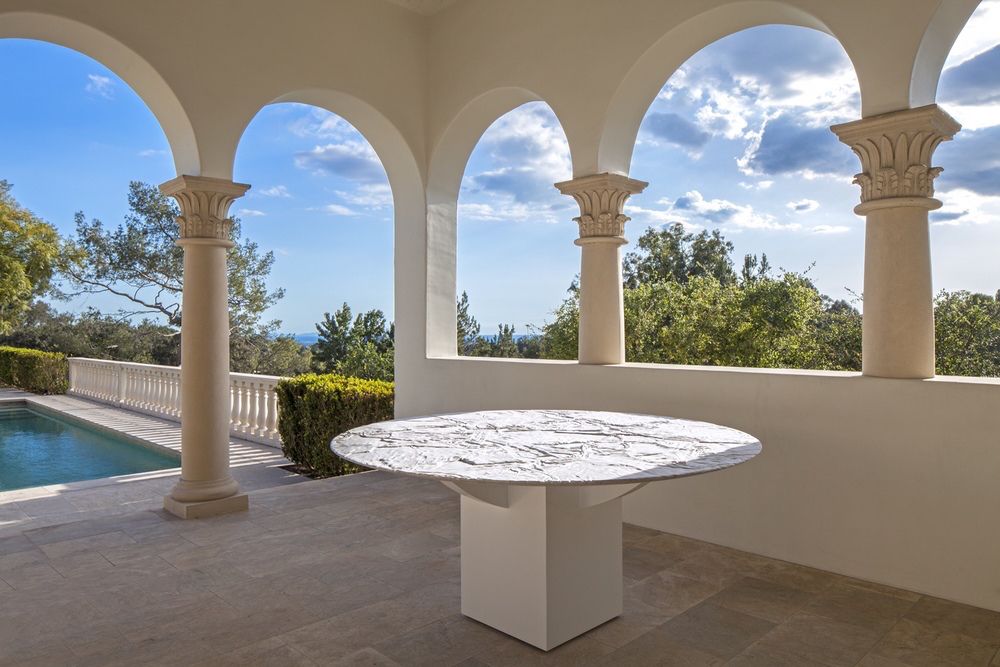 Fluid draping and the fine details of fabrics rendered in marble — these are the hallmarks of classic 16th and 17th century Italian sculptors like Bernini and Michelangelo. Fast forward to 2015 and California designer Sean Knibb is putting a modern spin on the same concept with his Casa Canova collection.

Knibb, a well-known landscape designer who has also made his mark with interior designs that “elevate” everyday items, became taken with 18th century sculptor Antonio Canova. Canova was a master of neoclassicism and is often credited with reviving the art of sculpture, which had diminished over time. His dynamic treatment of fabrics and draping was stunning.

In his collection named for the Italian master, Knibb has taken the humble but iconic garments of modern society — jeans and t-shirts —  and turned them into a work of art in marble. The designer says that at a distance, the table’s surface appears to be the disturbed surface of water. Indeed, when we first saw the pieces at ICFF, we weren’t sure what they were until we got close enough to see that the marble relief was clothing, including the finest of details: Ribbing, frayed hems, buttons and belt loops.

We asked Knibb about his subject matter, the creation process and upcoming projects.

When deciding to use a humble item in a new piece, why did you choose t-shirts and jeans?

I believe that currently these item speak to where we are socially and our desire to fit in, with our ever-growing appetite to consume.

The drapery of cloth in classic Italian sculptures is so fascinating — what impact do you hope the Casa Canova pieces will have? Reawaken an appreciation for this master skill of turning stone into a “fluid” representation common fabric?

In the past we walked draped in cloth, now we’re in T-shirts and Jeans. I think we’ve lost some of our sensitivity and I think these works will bring a moment of pause and reflection on the everyday and our appreciation for the day to day and the symbols that make up pop culture.

How did you choose the artisans in Italy? What is your communications process as they create the pieces?

After a year of interviews they where not only by far the best skilled but also in Italy, not to mention they insisted on doing the project and fully believed in the idea, so much so that the they started working on the first table unbeknownst to us. Our communication is simple, I make the table as an actual mock-up of clothing in my studio and then we decide on details together once they have the mock-up.

What humble item are you setting your sights on next?

A couch with motifs of pop culture, flip phones, fat laces, army men and skateboards, Pez dispensers, nuts and bolts toothpaste tubes to replace the ivy wattle and traditional carvings, along with the bikinis, polos and undershirts.

It takes two Italian sculptors about about 700 hours to carve one of these tables. In a media interview, Knibb said that the first carver does a rough cut, and then second refines the piece, adding the details. Not only do the pieces look incredibly life-like, wrinkles and all, but you can see the veins of the marble in these amazing works.

All over Italy, visitors stand gaping at the fluidity of the garments in classic statues. Similarly, it’s hard not to be astonished by the detail in these tables that Knibb has designed.  You feel as if you will reach out and touch well-worn, soft fabric, yet instead your fingers meet with cool, solid marble. It’s as if opposites have morphed together into a single tactile contradiction.

Visually enthralling?  Most definitely. Practical? Perhaps…perhaps not.  To call Knibb’s pieces mere tables would be silly. They are the textbook definition of art: Something that is beautiful, appealing, or of more than ordinary significance.