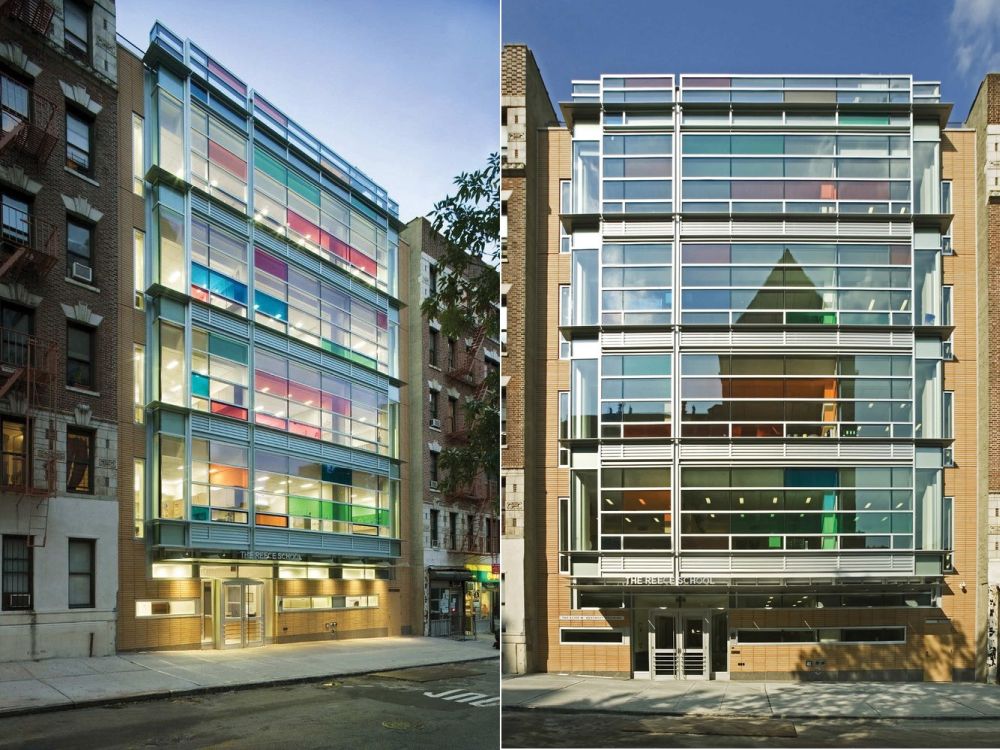 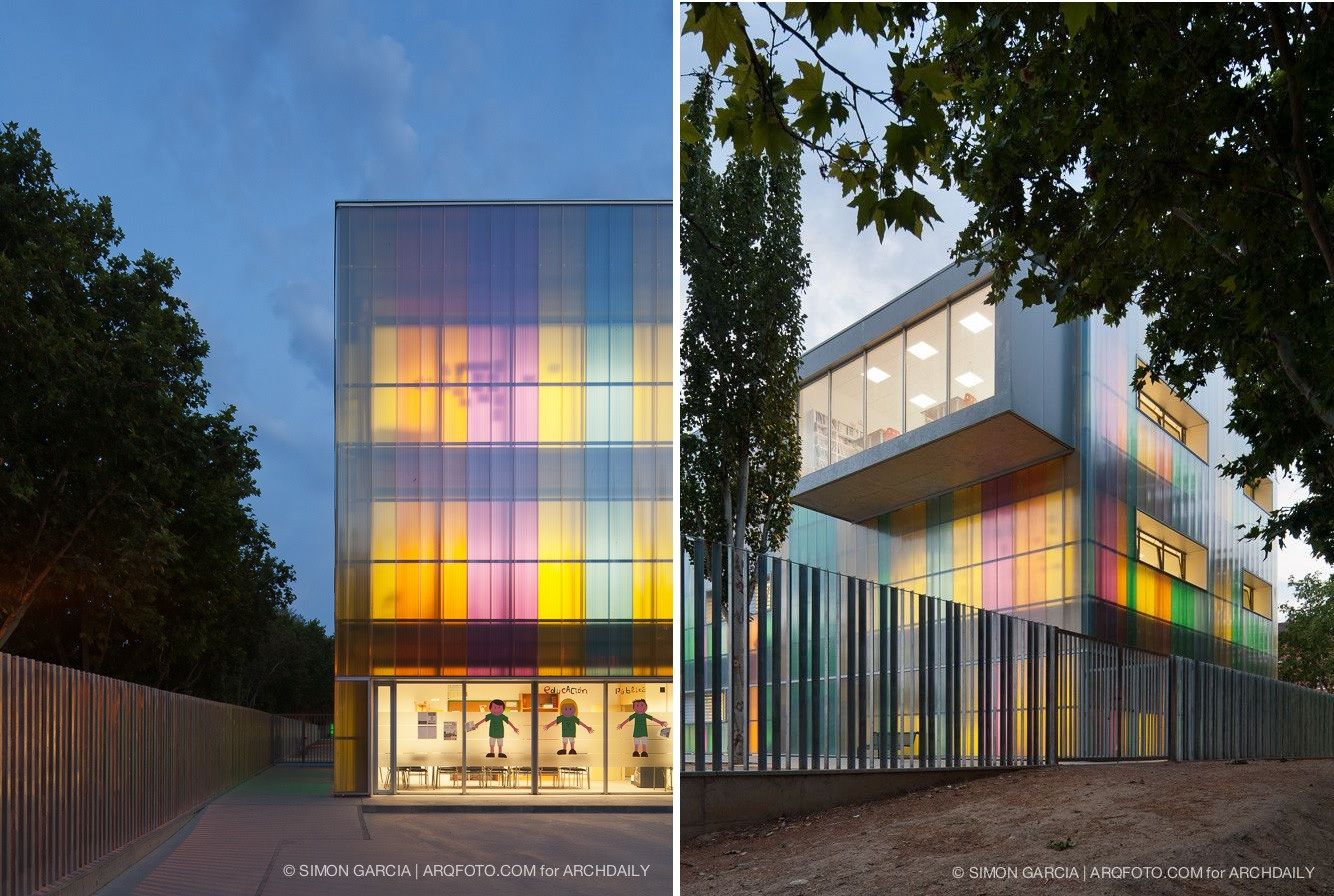 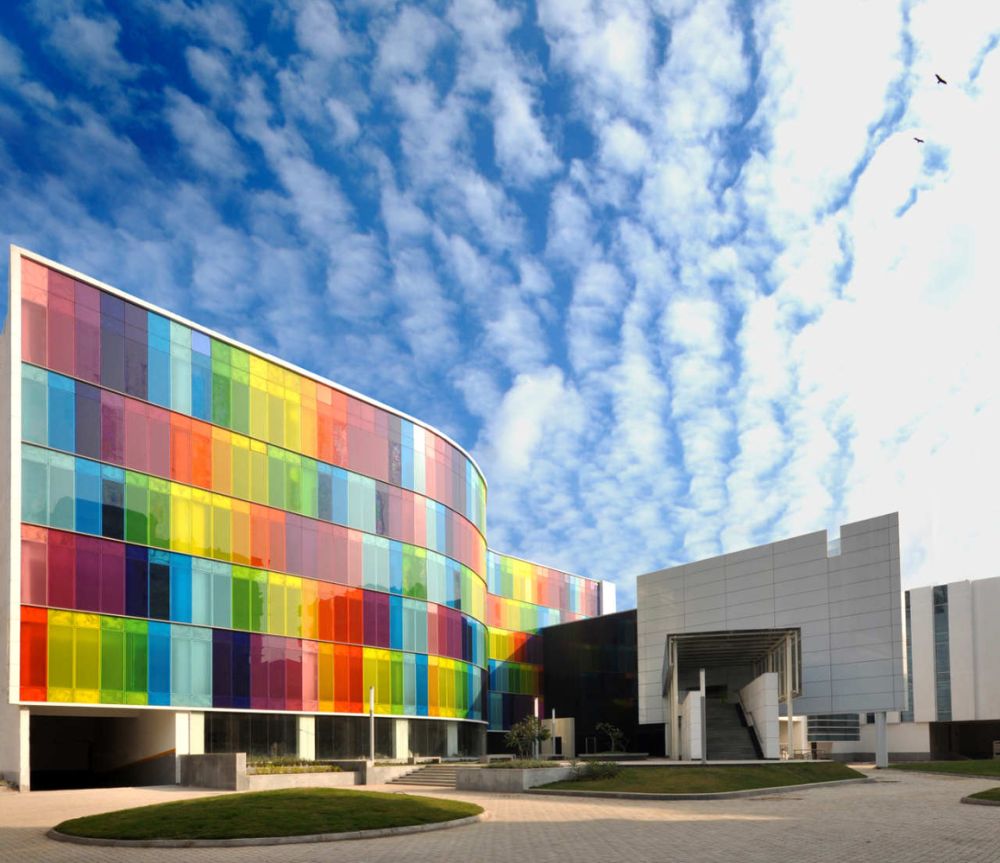 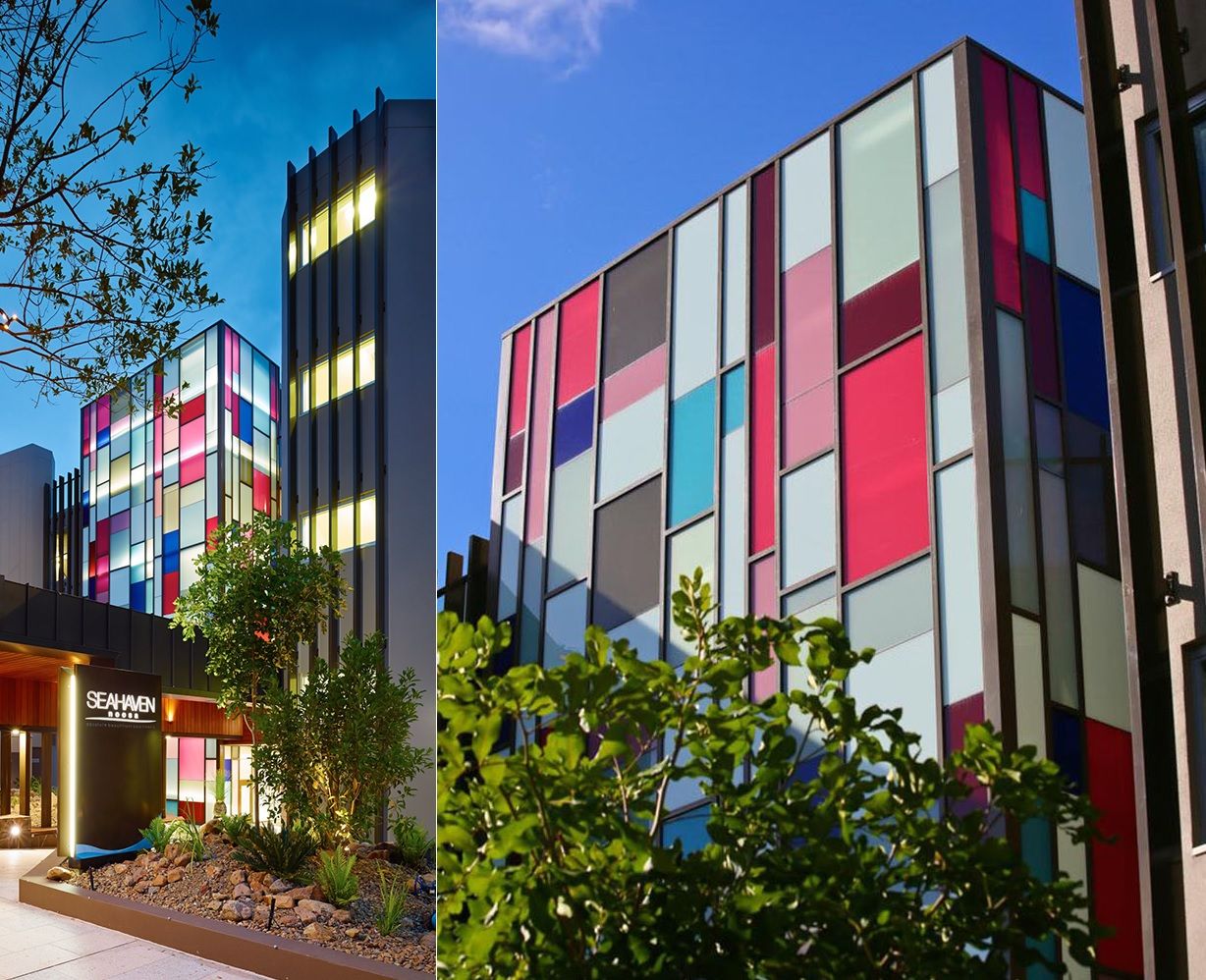 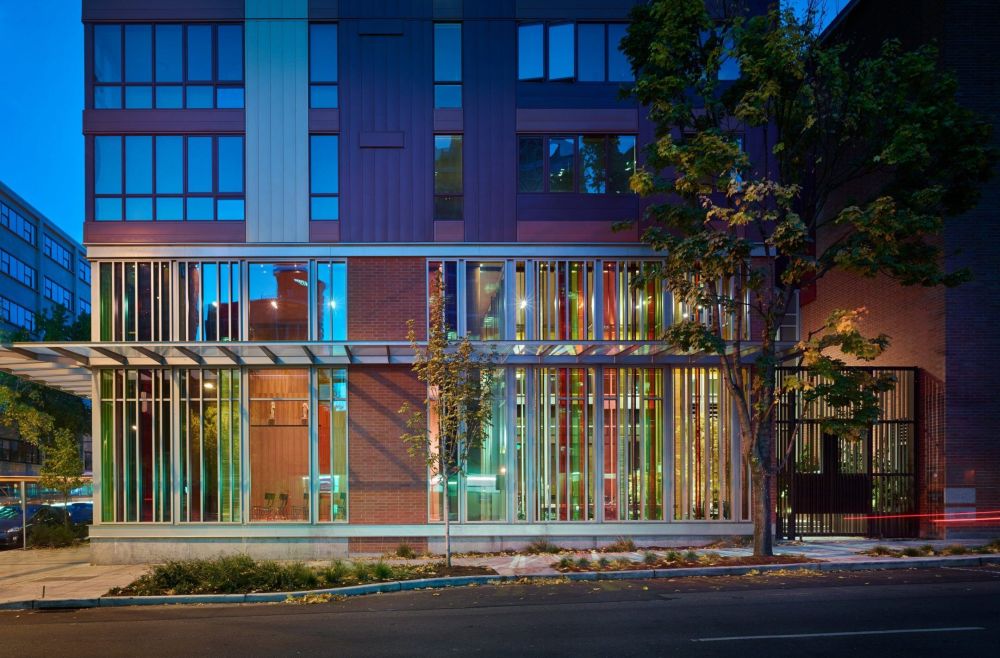 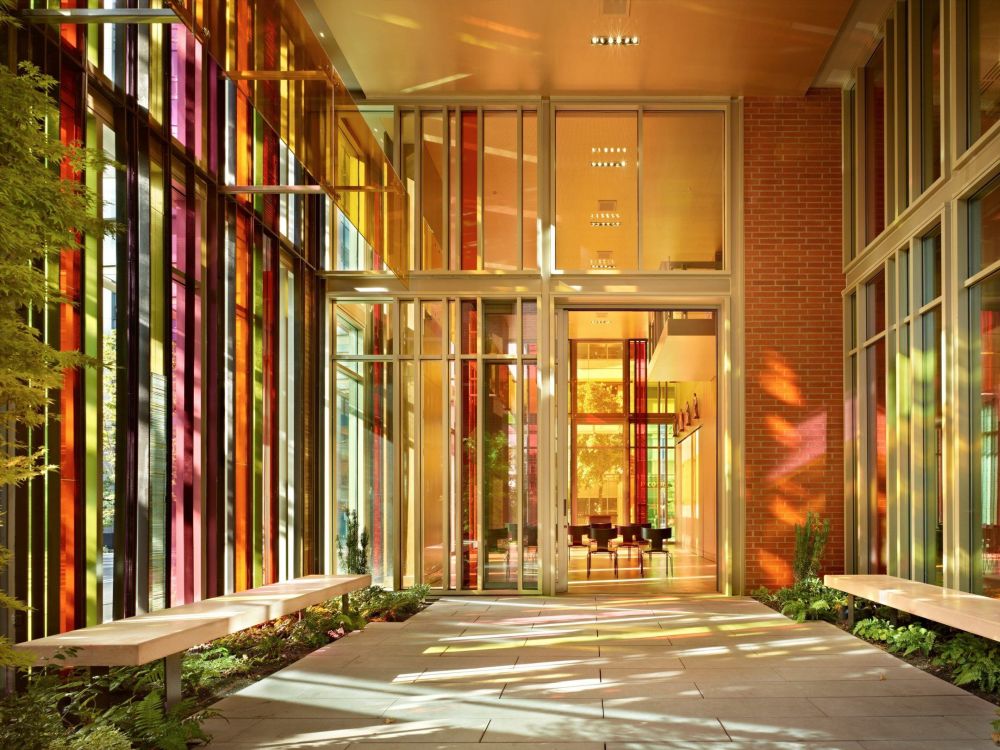 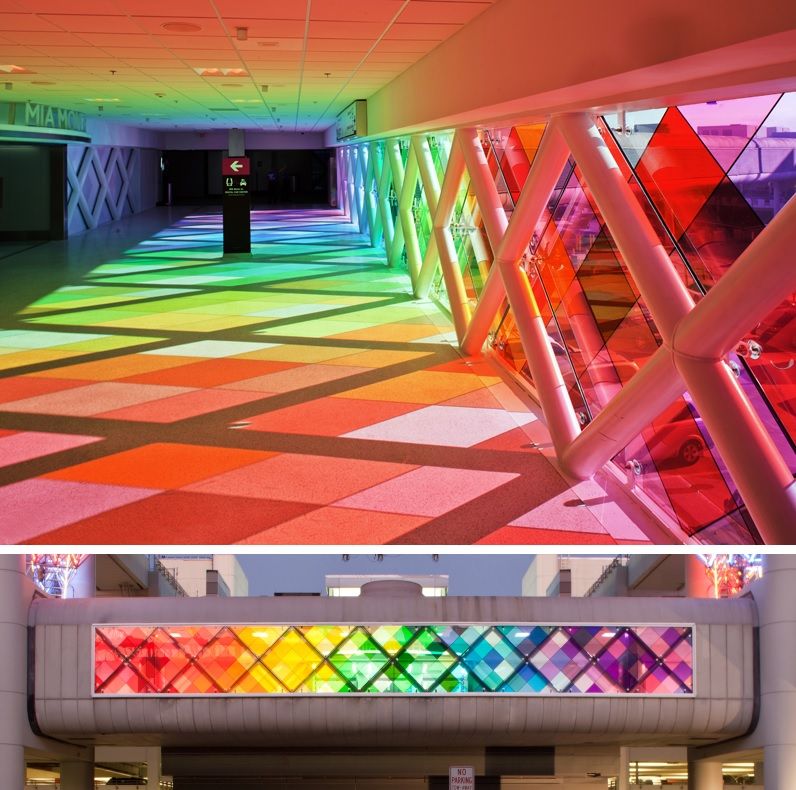 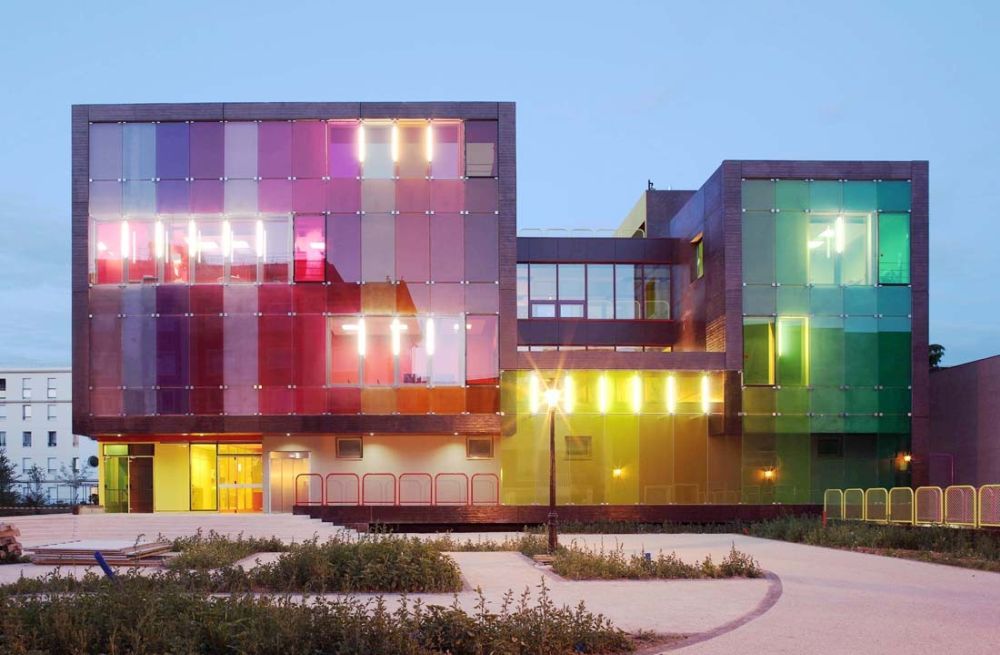 The role of color in architecture is surprisingly underestimated, with the majority of buildings being neutral-colored and designed to blend in along with the other equally colorless structures. While that’s a nice way to maintain a clean and simple aesthetic throughout cities and residential areas in general, seeing a design which doesn’t conform to this standard is very refreshing as well as inspiring. Today we’re analyzing how colored glass can be used in architecture to create amazing and unique designs by checking out 12 extraordinary projects from around the world.

Located on the outskirts of Bayonne city in France, this residential building has lots of character thanks to the red and green glass screens and balconies which adorn the white facades. The building was designed and built by architecture studio Bernard Bühler. It has an underground parking level, commercial spaces on the ground floor and apartments on top, each with its own south-facing balcony.

This is the Arc En Ciel, a beautiful and very eye-catching building designed by Bernard Bühler studio in Bordeaux, France. Its curved facades look like rainbows, featuring rows of colored glass panels on the top five levels. The ground floor features a metal shell which masks the parking area, with climbing plants spread throughout the surface. The first floor is a fully glazed office space which ensures a nice transition between the garage and the apartments.

The Sports and Leisure Center from Saint-Cloud, France is a very colorful and cheerful building with amazing facades covered in colored glass panels which give the building a modern and nonconformist appearance while also ensuring a strong connection between the interior and the outdoors. This was a project developed by studio KOZ Architectes back in 2009.

If you’re ever going through the Miami International Airport in Florida you’re in for a treat. Here you can find the Harmonic Convergence walkway, an amazing installation created by architect Christopher Janney. The installation creates a symphony of light, color and sound, featuring a rainbow of colored glass panels and speakers installed at regular intervals that play the sounds of tropical birds, thunderstorms and other native, defining symbols.

Colored glass is also a beautiful defining feature for the 2H House, a family home located in Ho Chi Minh City, Vietnam. It’s a project completed by Truong An Architecture in collaboration with 23°5 Studio. In this case, the windows take on a whole new meaning. While some remain unchanged, brining in natural light and connecting the interior spaces to the outdoors, others become decorative features similar to wall art thanks to the colored glass, their size and shape and the unusual manner in which they’re spread across the walls,

Even though stained glass is typical associated with churches, the design of the Gethsemane Lutheran Church is far from common. The church is located in Seattle Washington and was originally built in the 1950s. The new design is the work of architect Jim Olson of studio Olson Kundig. The remodeled exterior features a series of multi-colored metal and glass bands which give the church an abstract and modern appearance while staying true to its contemplative and abstract nature.

The Seahaven Resort located in Queensland, Australia is like a colorful beacon of light due to its unusual and cheerful exterior and overall design. It consists of three buildings which are visually connected through vertical aluminum screening that double as privacy walls. The entry area is marked by backlit colored glass panels that match the exterior facades of the hotel. This is a project developed by studio DM2 Architecture.

The international Management Institute in Kolkata is a modern and colorful building with a facade covered in a multitude of glass panels in various different colors that create a repetitive pattern with a rainbow-like effect. This is a unique and remarkable design, the first of its kind to be built in India. The inspiration for this vibrant and dynamic look was the sky. This was a project completed by Abin Design Studio.

The facade of this building is absolutely spectacular. This is a school in Ejea de los Caballeros, which is in Zaragoza, Spain. It was designed and built by studios Cruz Diez García in collaboration with Santiago Carroquino Larraz. The facade is clad in two layers: the one on the outside is a polycarbonate shell and the one on the inside is a colored glass curtain. The glass panels create a beautiful pattern with vertical stripes in different color tones.

This is a residential complex located in Amsterdam. It was designed by heren 5 architecten and customized by local artist stefan glerum who used this amazing stained glass facade to tell stories inspired by the history of this region. The front and rear facade reference the research lab of professor Ernst Laqueur, the synagogue, the gas factory, WW1 scenes and other local symbols. Each section of the facade tells a story and seamless transitions into the next one.

The ONS İNCEK luxury residential showroom from Ankara, Turkey can be easily spotted from a distance thanks to its eye-catching exterior. The building facades are enveloped in colorful glass panels positioned vertically at an angle. The glass panels feature different shades of orange, green and glue and the structures themselves mimic the landscape and site topography, featuring curved surfaces which seamless follow the slopes and give the building an organic appearance.  This is an amazing project complete by studio Yazgan Design Architecture.

The Reece School from New York, U.S. is an award-winning project completed by Platt Byard Dovell White Architects in 2006. It has a beautiful front facade with expansive glass surfaces and colored glass inserts that create a beautiful pattern and give it a youthful and cheerful appearance. The modern design helps the building stand out and contrast with the neighboring structures and the overall architectural style in the region. It’s not just the colorful facade that makes this an unusual project but also the overall interior design and the fact that this is a school designed to respond to the children’s special needs.