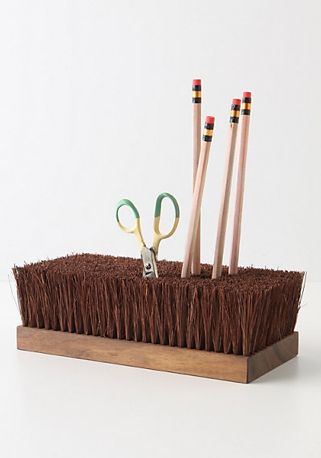 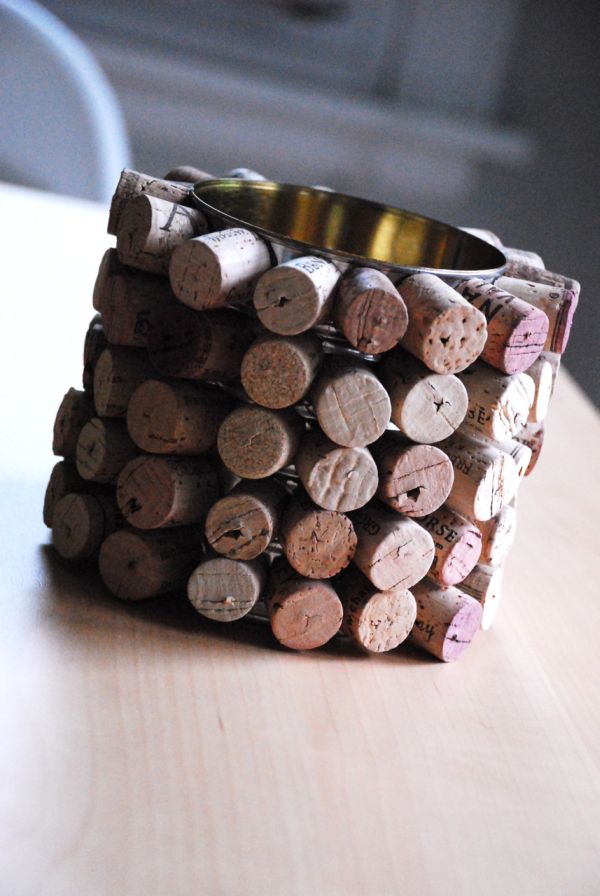 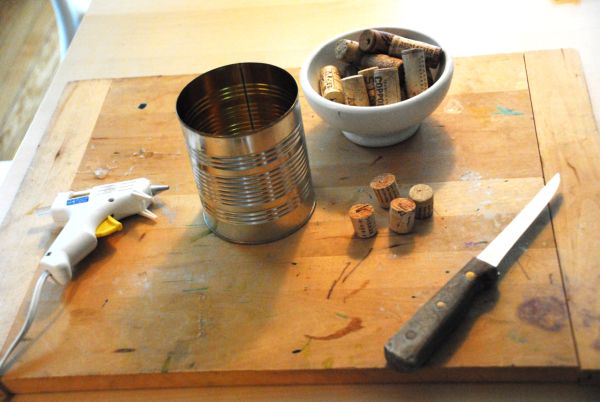 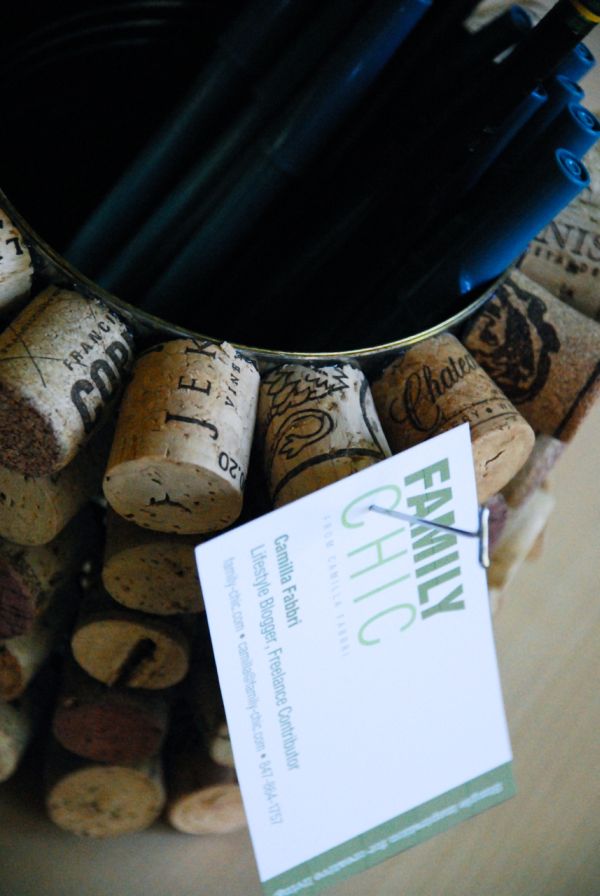 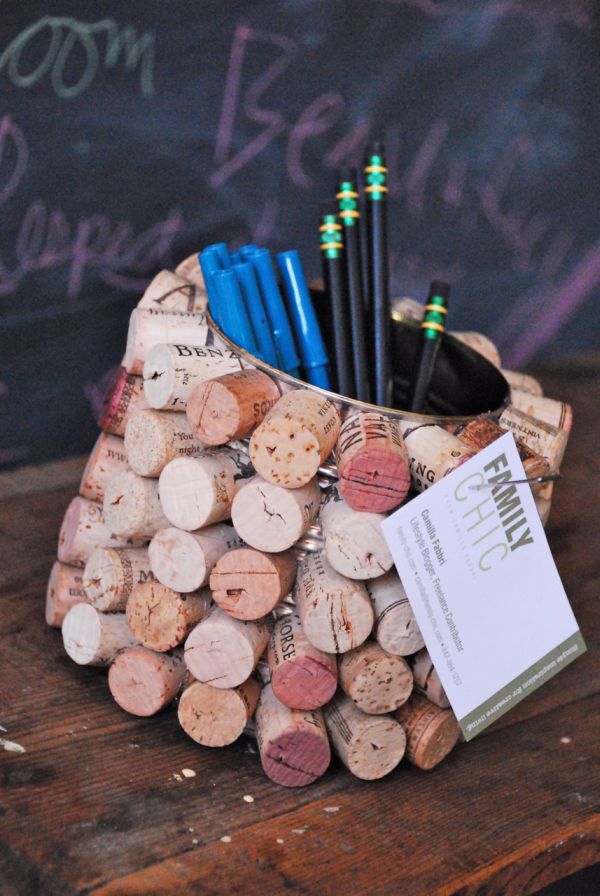 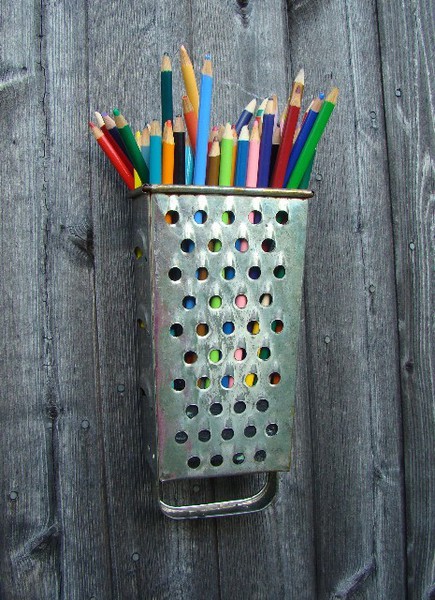 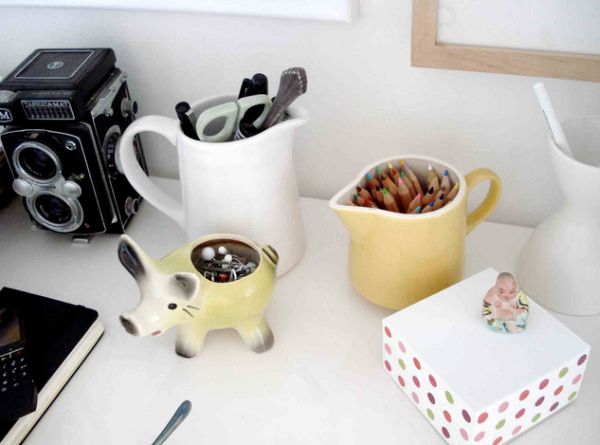 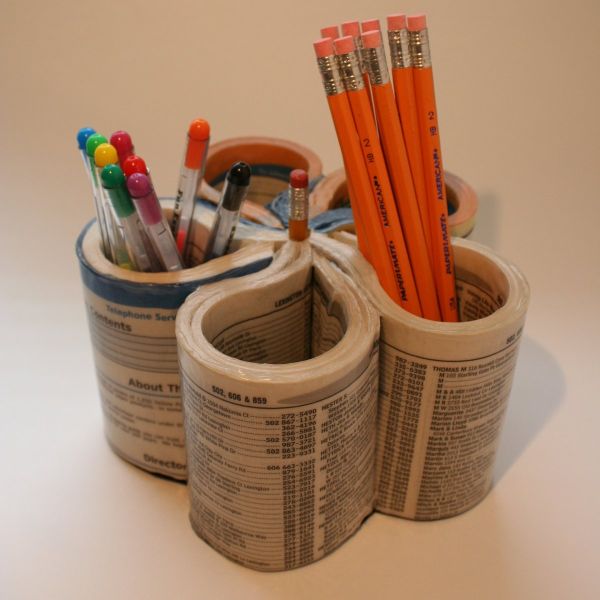 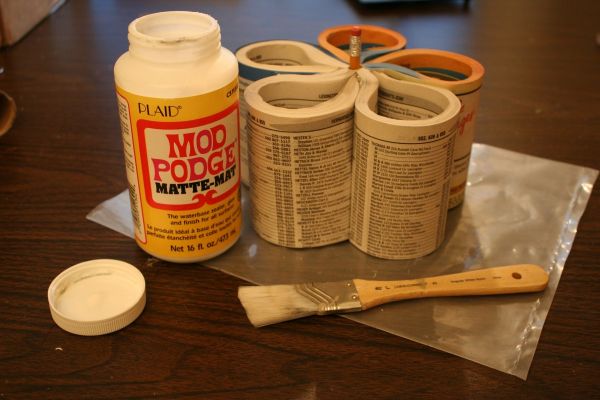 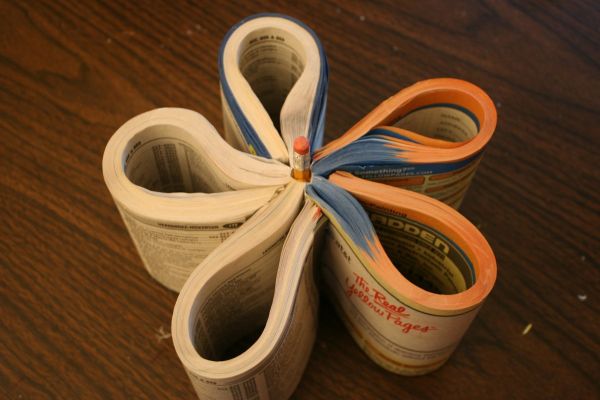 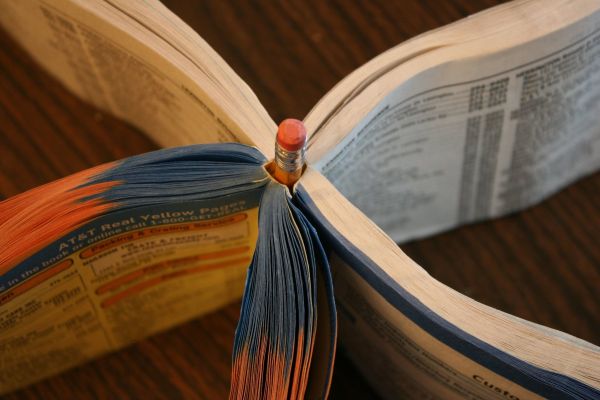 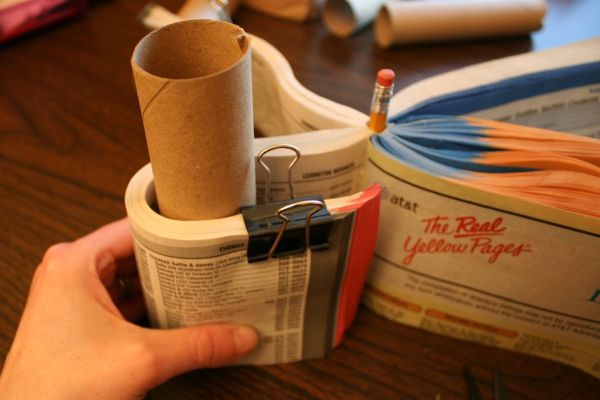 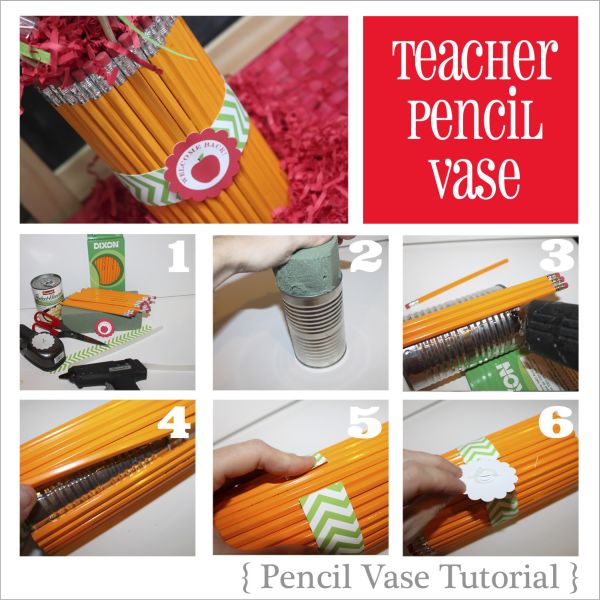 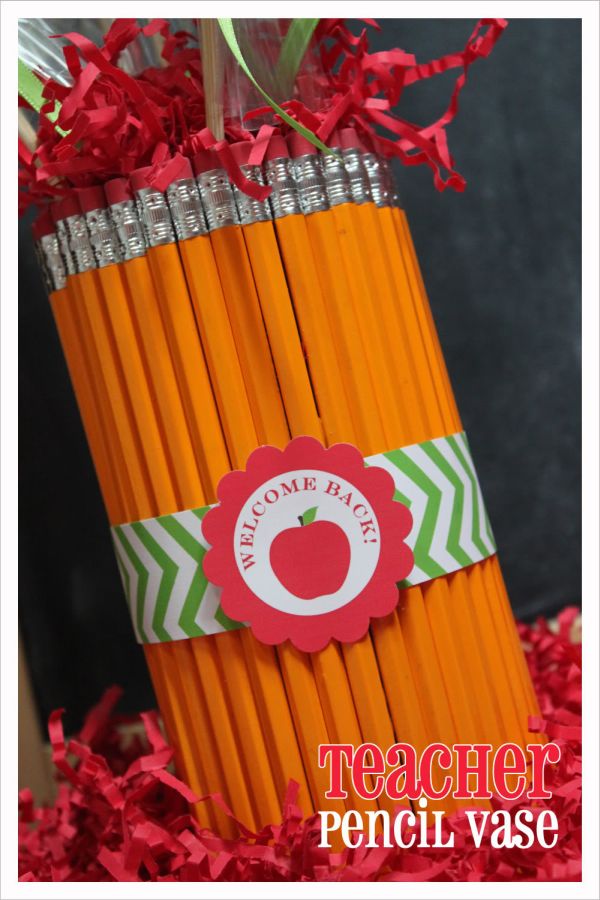 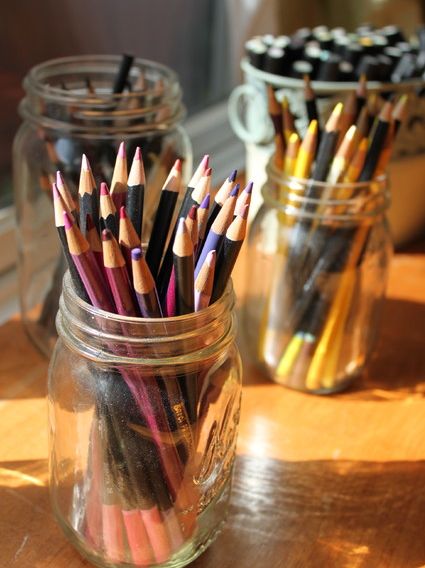 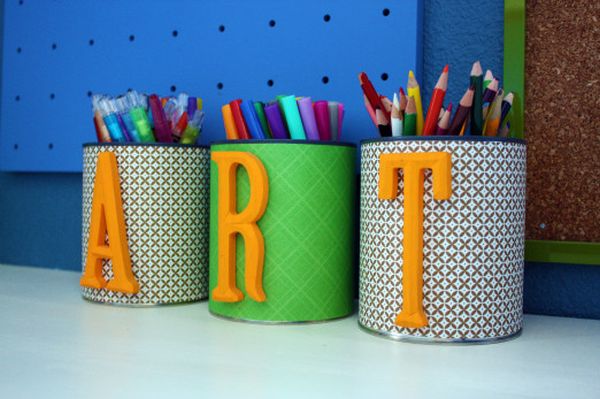 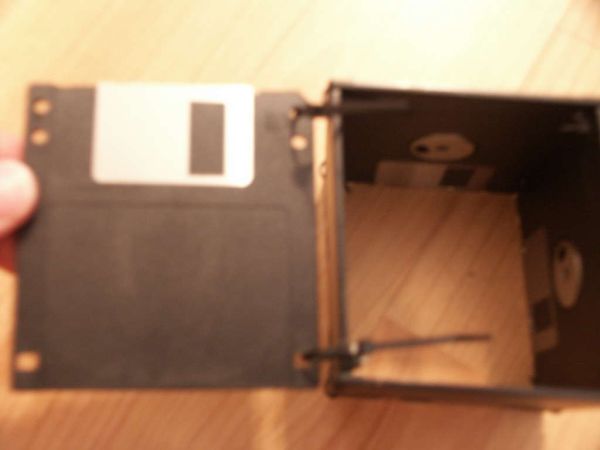 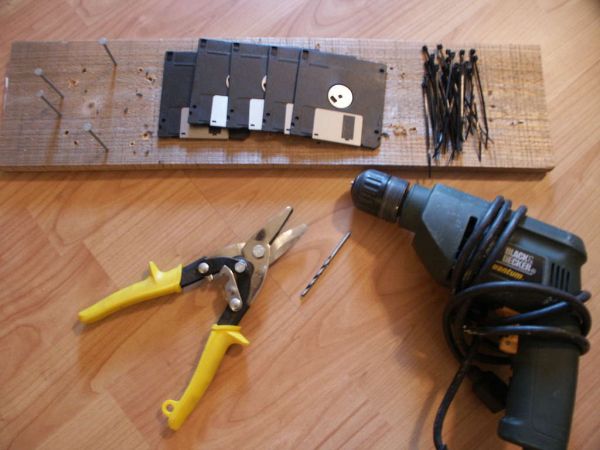 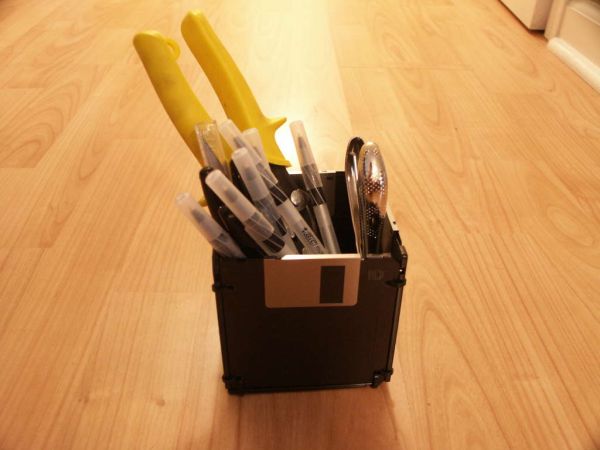 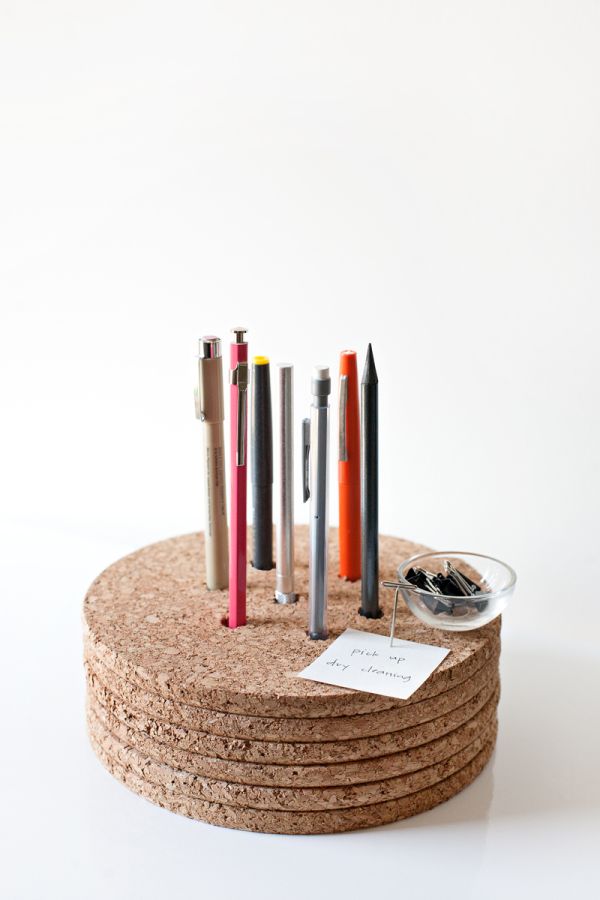 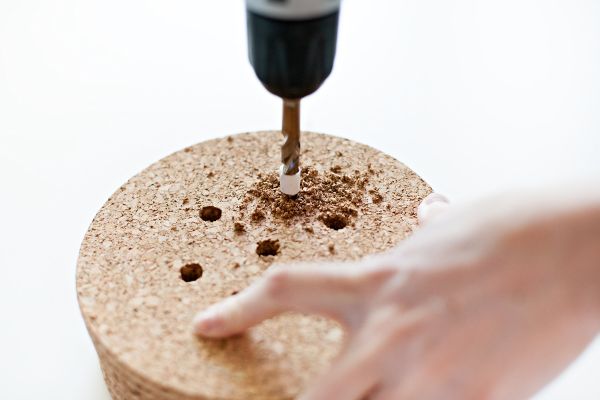 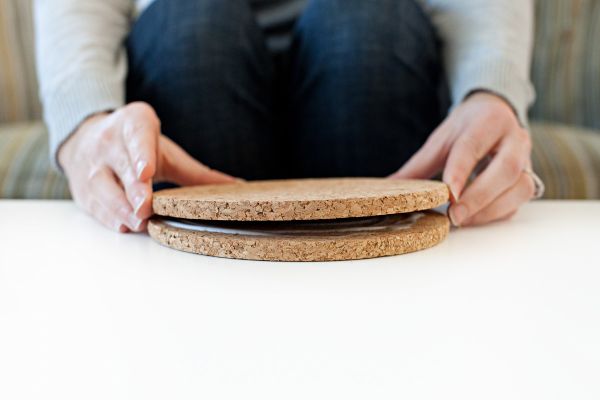 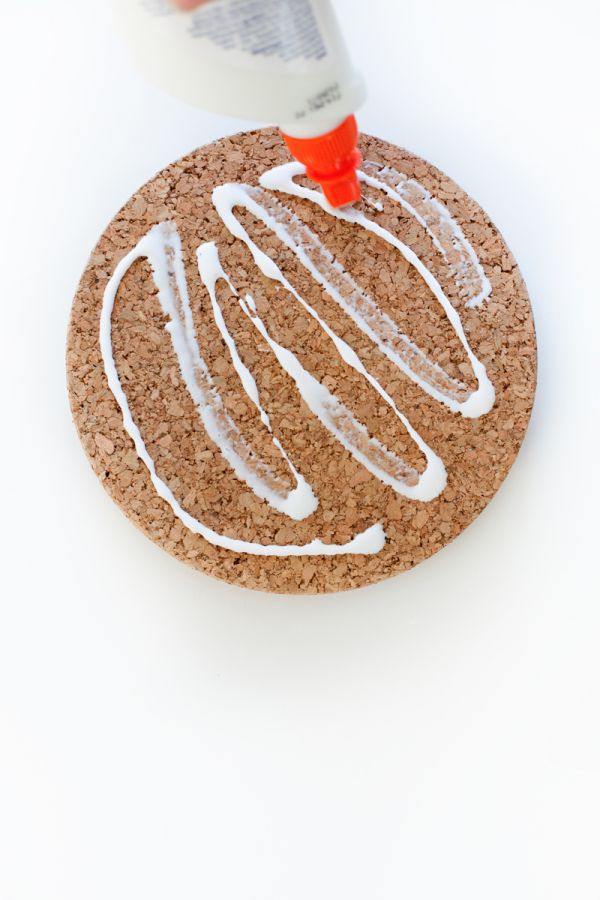 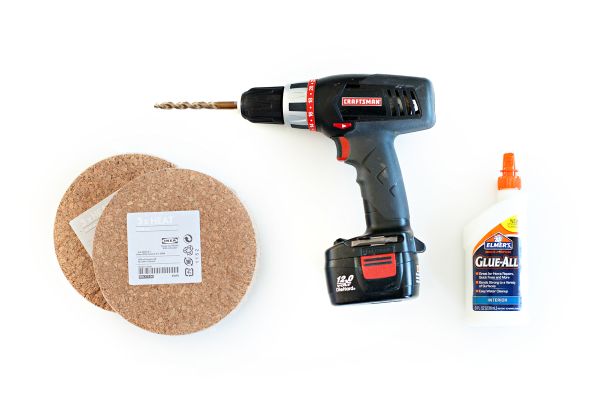 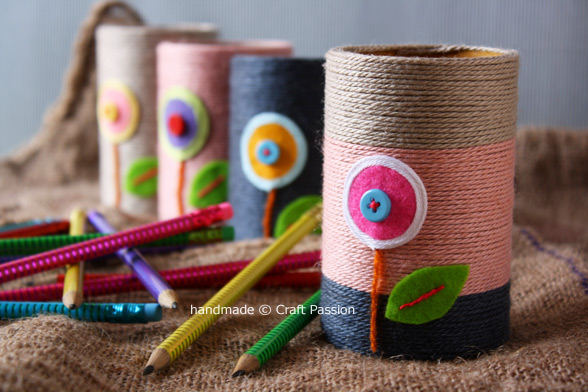 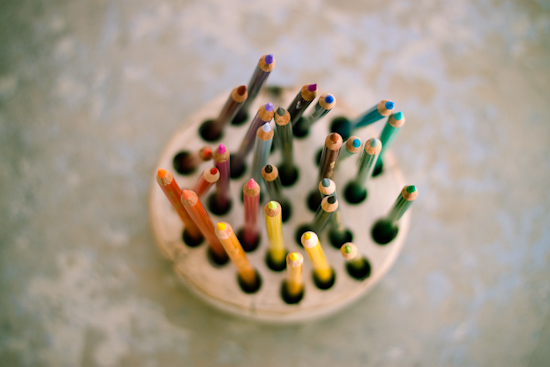 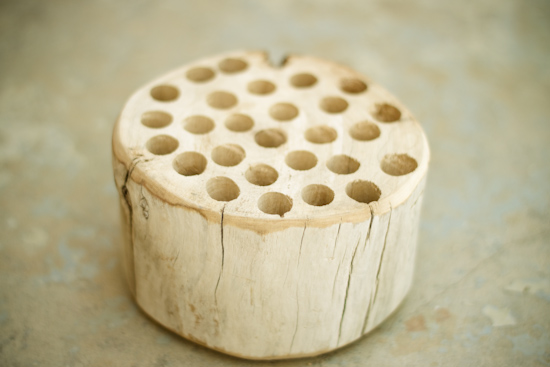 You might not pay much attention to this detail but you probably have a few pencils on your desk that you always move from one place to another and always stumble upon. It would be much easier if you would just have something to store them in and get them out of the way. It would make your desk much more organized and you’d also always know where to go when you need a pen or pencil. We’ve selected a few of the most interesting pencil holder design ideas we could find and hopefully there’s something in there for you too.

This one is a rustic pencil holder that’s been made from a piece of wood. It’s not difficult at all to make a similar one. All you need to do is find a piece that has the right shape and size and simply add a few holes to it. Sand down the edges and you get a beautiful decorative piece that’s also functional. It’s a lovely piece for the office or for your desk at home.{found on strawberry-chic}.

If you have a little more free time you could also try something a little more complex. For example, if you have some paper cores or paper tubes you can turn them into beautiful pencil holders. To make one piece you need 1 paper core, 2 pieces of thick cardboard, 3 yarns, 3 felts, masking tape and some glue. First measure the circumference of the tube and cut a circle out using thick cardboard. Attach it to the base of the paper tube using tape and also add a piece of felt. Then start wrapping the yarn. Glue it as you advance. You can also make some embellishments at the end if you like.{found on craftpassion}.

This pencil holder is somewhat similar to the first one, although the process and the materials used are very different. To make this one you need 6 cork trivets, a power drill and glue. The first step is to glue the trivets by stacking them one on top of the other. Allow them to dry overnight and then mark the spots where you want the holes for the pencils to go. Drill the holes and it’s all done. You can also use this pencil holder as an office organizer.{found on designformankind}.

This is one of the most ingenious ideas so far. It’s a pencil holder made from floppy disks. Since they are no longer used they’ve become nothing but memories. But you can bring them back to life with projects like this one. To make this pencil holder you’ll need 5 floppy disks, a drill, scissors and zip ties. For four of the floppy disks you need to drill holes exactly where the indents are and for the fifth one slightly above the indent. Zip the four floppy disks together and then attach the one at the bottom.{found on instructables}.

You can also repurpose some small paint cans, coffee cans, soup cans and other types of cans you can think of and turn them into pencil holders. It’s a very simple project. just wrap the cans in wrapping paper or in fabric and, if you want, also personalize them with initials or anything else you want. It’s a nice project that kids can make for their parents.

Of course, it doesn’t get simpler than just taking an empty Mason jar and repurposing it as a pencil holder. You don’t even have to do anything other than clean the jar and maybe removing the label if it has one. Since it’s transparent, it will be practical and beautiful at the same time. If you want you could spray paint the jar but it looks nice as it is.

This is also a pencil holder but not in the sense you would expect it to be. It’s in fact a sort of vase and it’s made from pencils. So it’s not a container that holds pencils but one that was made out of pencils. It might seem like a complicated project but it’s actually very simple. You need a can, some florist foam or Styrofoam, 2 boxes of pencils, a circle punch, scissors and hot glue. Place a small piece if florist foam inside the can and then place glue in a vertical line from the bottom to the top. Press one pencil into the glue and hold until the glue dries. Do the same thing for the rest of the pencils. Then wrap everything with a ribbon.{found on amanda}.

Turn The Phone Book Into A Pencil Holder.

We also found another very interesting project. It’s also a pencil holder but this one has multiple compartments and it requires an old book. The one in the example is made out of the phone book that’s been cut down to size. You have to separate the pages of the book evenly into 5 sections. Then roll the spine up tightly in the middle and glue a pencil to the spine. Curve the sections, form loops and use binder clips to keep them in place. Then cut off the ends of the pages so that they become square. Then secure the loops with glue. Apply Mod Podge to the loops, first the top edges and then the sides as well.{found on chicaandjo}.

Coffee mugs and small kitchen bowls are also great for storing pencils and office supplies. You don’t need to search the whole store for fancy organizational items for your desk. You can use whatever you have in your home. It’s simple and practical. Repurposing items is always fun and the results are satisfying as well.

This pencil holder is one of the most unusual ones. It’s also a repurposed item but a very unexpected one. This is actually a grater that’s been placed upside down and attached to a wall. The top area which is now the bottom has been secured so that the pencils don’t fall through. It’s so unexpected to see this pencil holder that you don’t even know what to think about it.

If you like wine at least save the corks. They can be used for lots of projects, one of which is a pencil holder. It’s easy to make but it requires a lot of corks so you need to collect them first. You need a can or anything similar to a can and some glue. You basically just have to glue the corks to the can one by one. Make sure they’re placed evenly and that they follow straight lines.{found on amandaparkerandfamily}.

And since this is the last example we’re going to offer you, we decided to end with something fun and unusual. It’s a pencil holder made out of a brush. You can buy a simple brush or use one that you already have but make sure you clean it first. It’s unexpected and it’s a very creative and ingenious idea.