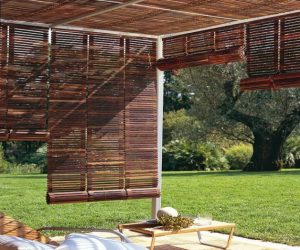 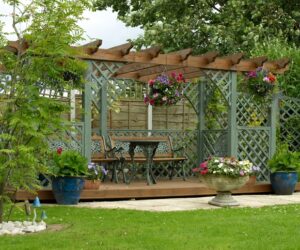 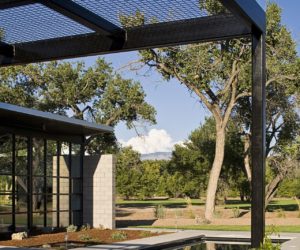 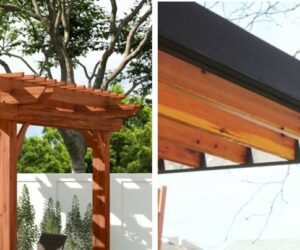 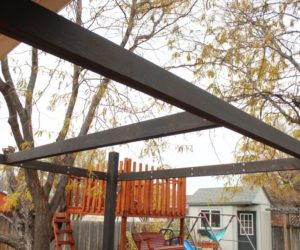 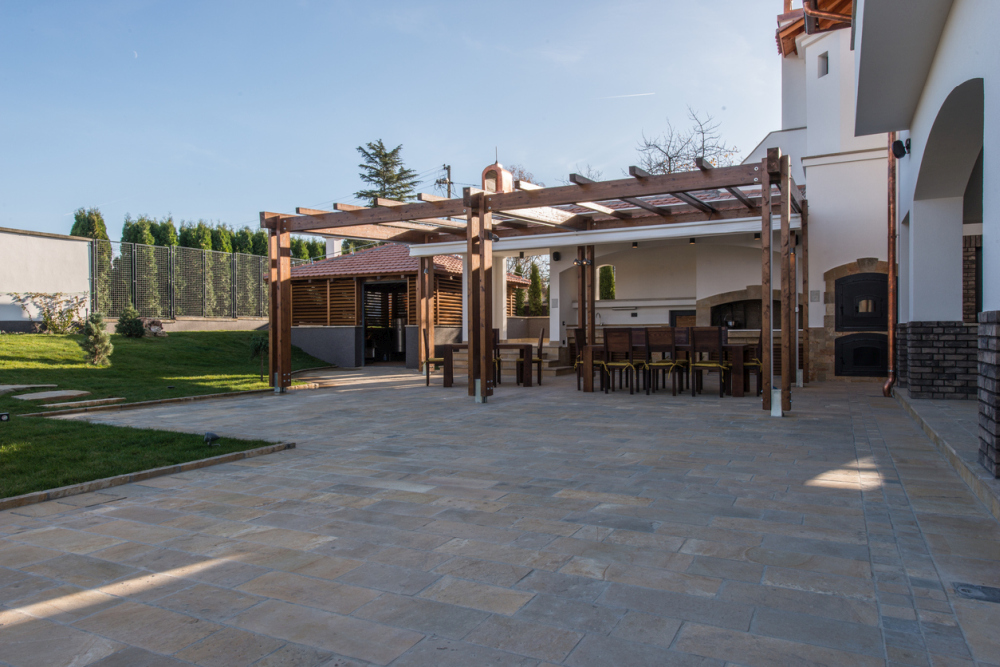 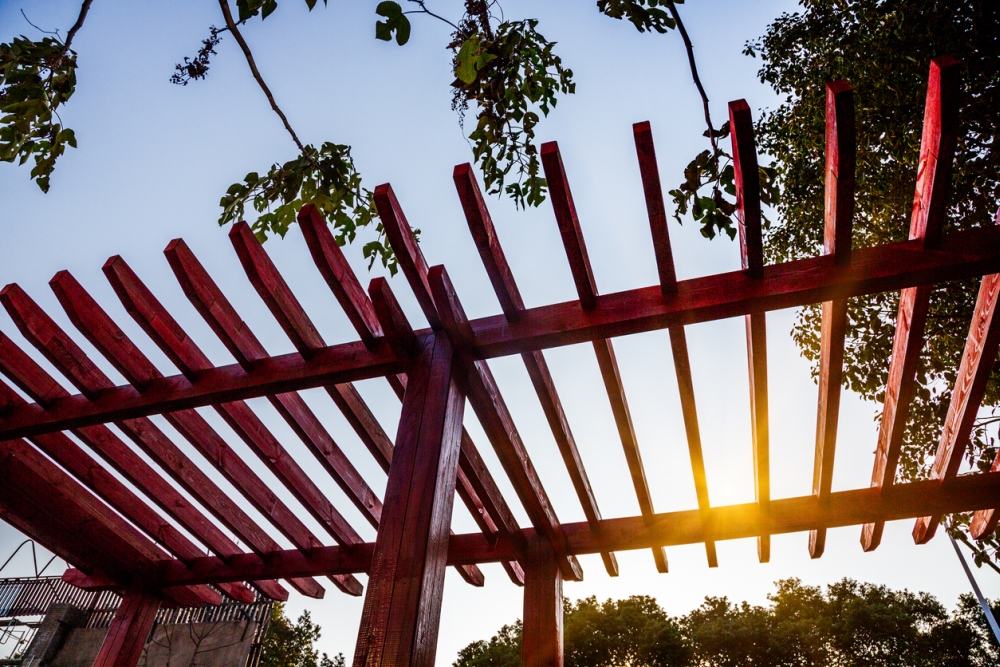 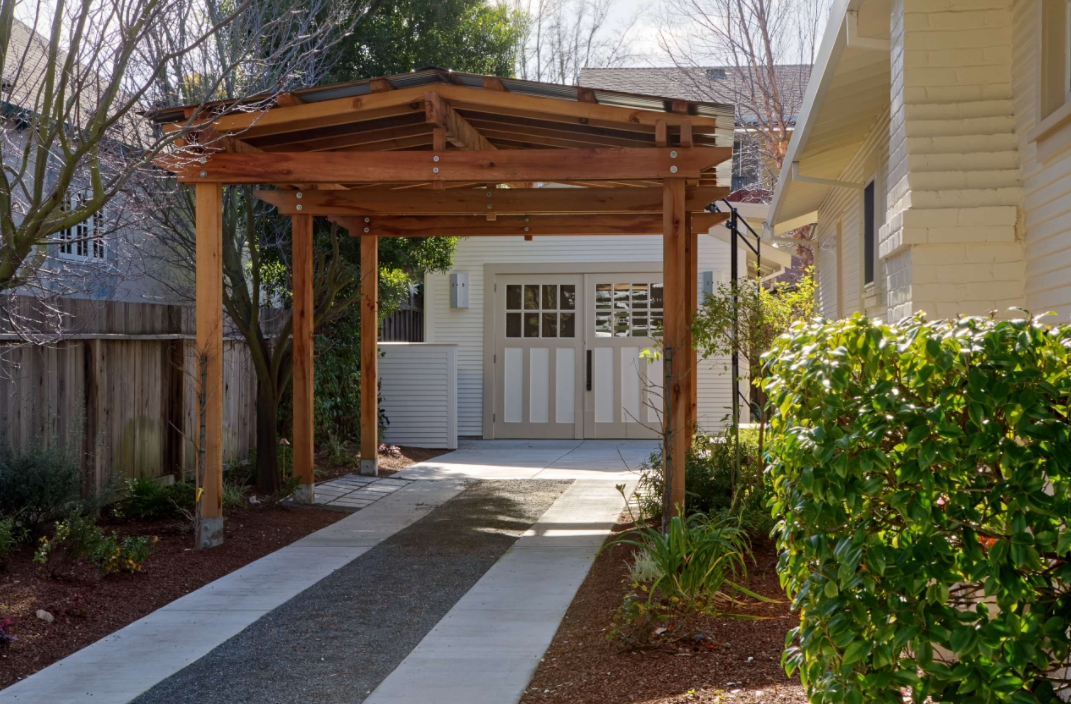 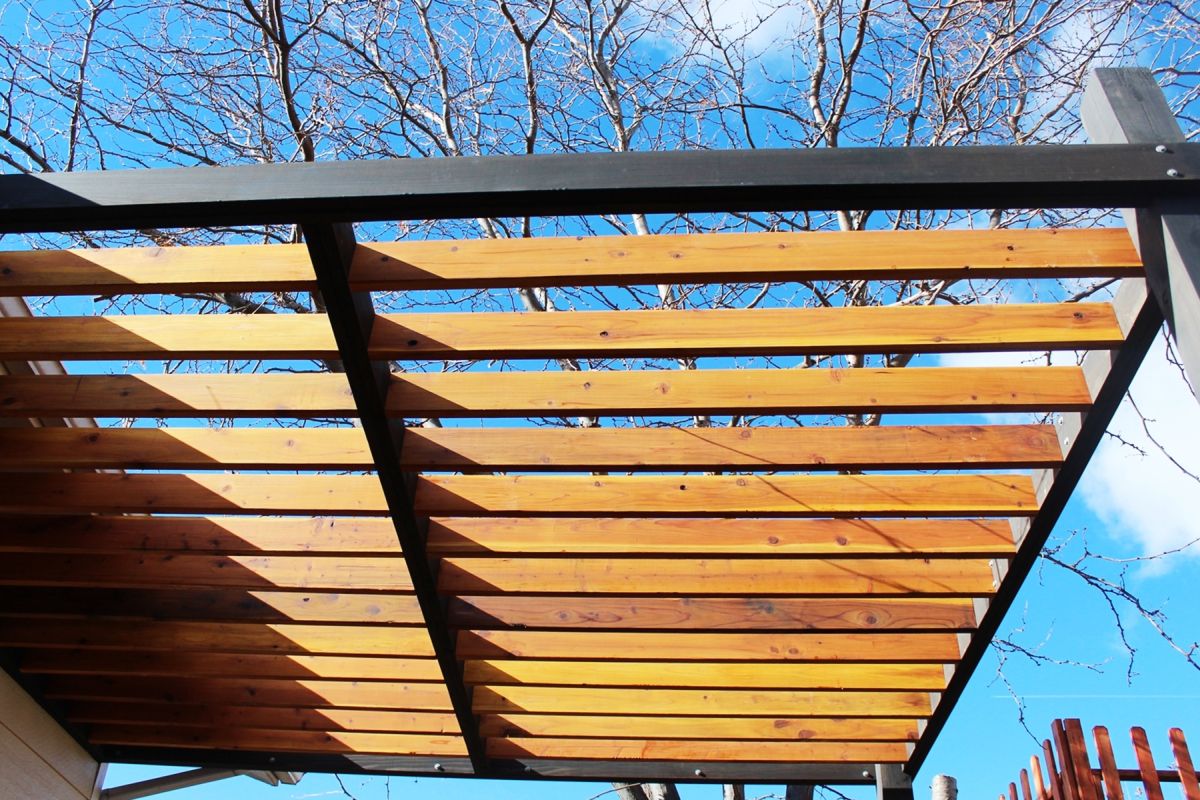 What is a pergola? A pergola is an outdoor structure that offers shade and protection from direct sunlight. There are plenty of outdoor structures other than patios and decks that can turn your backyard space into a more enjoyable environment. One such structure is the pergola. 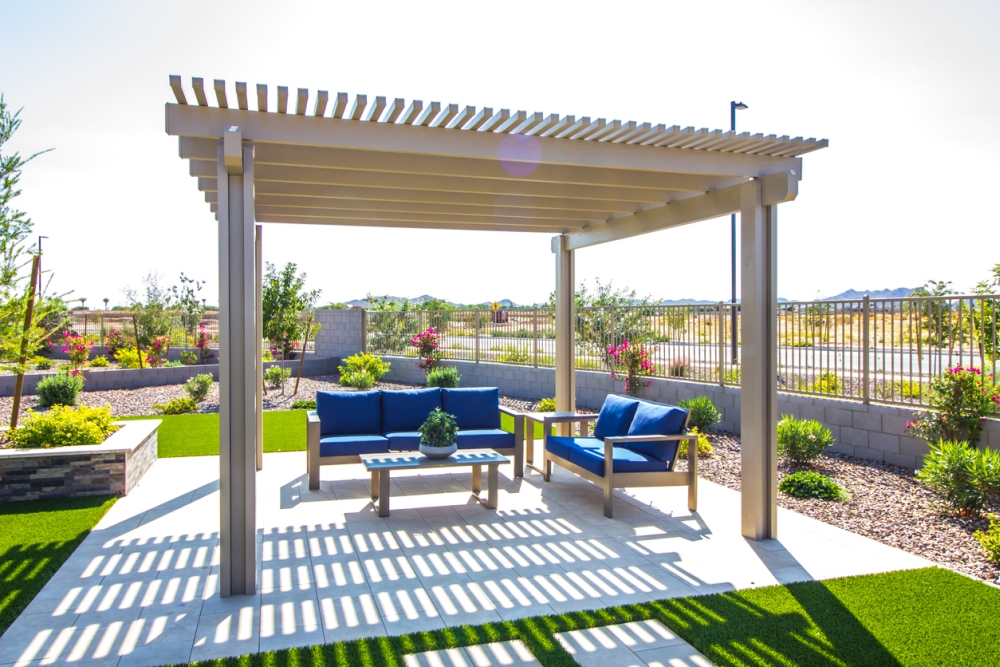 A recent report from the National Association of Home Builders (NAHB) titled “What Homeowners Really Want” found that the percentage of homeowners rating a patio as essential increased from 73 percent to 87 percent over the past 15 years.

If you don’t know what a pergola is, then our objective is to change that.  A pergola is an efficient to make the most of your outdoor space. Whether for barbeques or spending time alone, a pergola is more than just a structure, it’s a destination.

What Is A Pergola?

According to Merriam-Webster, a pergola is, “a structure usually consisting of parallel colonnades supporting an open roof of girders and cross rafters.”

Pergola covers offer shade with slats covered with a canvas or climbing vines. A covered pergola canvas can be pulled back for more sunlight or moonlight.

What Are The Benefits Of A Pergola?

An outdoor pergola is made for exterior spaces. The structure provides shade without blocking sunlight.

Pergolas are ideal outdoor places where friends and family can meet and gather. The structures are good for pool parties as they provide a space away from the action for those who want something different.

The outdoor structures come in different sizes. You can have more than one pergola if necessary. Designate one for personal use, another for grilling, and one for a picnic table.

Pergolas offer the best of both worlds. You can choose between full shade or complete sunshine. Other outdoor structures, like arbors or gazebos, do not offer the same.

There are so many options to choose from, so keep an open mind. A pergola is like a convertible car, but much easier to use the top.

You can use a pergola as a carport for multiple cars. There are even pergolas tall enough for pickup trucks to derive under. Then you can choose to keep the shade up or leave it down to show off your truck.

Pergola designs are available in a wide variety of options. They offer a summertime aesthetic that fits with any outdoor environment. A backyard pergola is wide, open, and can have plants growing around them.

If you add lattice or don’t plan on using the pergola cover, then grow climbing vines across the top. A pergola green roof offers natural shade. Should you choose to grow vines, make sure you keep them trimmed for safety reasons.

It’s a common question and one that can be applied to pavilions, arbors, and patios. There are different types of outdoor spaces. It’s easy to get them mixed up. Here are the primary types of outdoor structures that often get confused for pergolas.

Gazebos are the first thing to get confused with the modern pergola. But the two are not the same at all. Gazebos are small but come in many different shapes and sizes. The main difference between a gazebo and pergola is functionality.

In the pergola family, the arbor is the youngest sibling. A popular misconception is how pergolas and arbors are the same.

The Latin word for “tree” is “arbor.”  The word indicates the structure’s intent of providing the same shelter as a tree. Adding to its definition, an arbor was once known as a “bower.” The words are often used interchangeably.

A bower refers to plant growth that forms a natural recess without structural support. For example, a weeping tree.

An arbor has a domed or arched roof made of rafters with spaces in between. Meanwhile, a backyard pergola roof is flat.

During the Colonial Era, New England gardens featured what was known as an “Arbor in a Salem Garden.” It was during this period that an arbor was used as a combination of a covered pathway and resting place.

The biggest difference between a pergola and an arbor is size. Arbors are open structures that allow you to walk under, just like pergolas. However, pergolas provide seating and shade for multiple people.

Arbors are also meant for walking under. The structures are erected along walkways. They are recessed or somewhat enclosed, and shaded by trees or shrubs. The arbor functions as a resting place in a wooded area.

In formal gardens, an arbor is a small structure with vines trained over latticework on a frame and offers shade. A true arbor features a protected bench for seating, which distinguishes it from a trellis.

Pergolas are more ornamental than arbors. Also, arbors do not have flooring and instead use the natural environment.

During the Elizabethan Era (1558 – 1603), arbors were known as “green galleries” or “pleached alleys.” An arbor was named as such because its trees were trained accordingly until the pathway it covered grew into a living tunnel.

In the 19th century, arbors enjoyed widespread popularity. The structures were used to make a picket fence opening or sometimes include a gate entrance.

An arbor is not for the impatient. When you build one, you shouldn’t anticipate immediate results. The biggest mistake people make is when they use weak or temporary latticework.

Whichever trees and vines you decide to use, it will take three seasons to train them, at the minimum. If you neglect this step and use weak latticework, your arbor will be useless within five years. And this is how an arbor is different, the structure is like raising a dog, the more care you give it, the more it will protect you when it gets older.

If you combine vines with perennials, the former could choke and suffocate the latter. When this happens, their growth will be warped and stunted.

Vines must be trained and raised like children. As the vines grow along the structure, secure them to your arbor with green plastic tape or pieces of soft natural cloth. Do not use wires or unnatural materials because they don’t decompose and will girdle the plants.

Here is a quick list of the best climbing vines for an arbor:

Pergola Vs Other Outdoor Structures

To understand what makes a pergola so unique, let’s look at how it’s different from other popular outdoor structures.

A patio is more similar to a deck than any other type of structure. That’s because a patio is the floor of the outdoor area, not the cover. A patio can be covered with a pergola to offer more shade.

A pavilion is similar to a gazebo. The truth is that the two words are often interchangeable. Some people refer to the hexagonal-shaped structures as gazebos and everything else as a pavilion, including pergolas.

It’s difficult to distinguish a pavilion from other structures. A pavilion is a generic term. It refers to a large open gazebo that isn’t attached to a structure.

A trellis is a wall with latticework. Arbor styles are sometimes called trellises because they feature latticework. The walls also have plants growing on them, which is their primary purpose.

Trellises are constructed of strips of wood, metal, or plastic crisscrossed to form a diamond or rectangular latticework. Trellises can be fan shaped or in any form that suits your space.

The distinguishing feature of a trellis is how it doesn’t offer protection from the rain. However, similar to an arbor, a trellis covered with vining plants offers cooling advantages.

What Is A Pergola Carport?

A pergola carport protects automobiles. They are useful when you don’t have a covered garage. The structure also offers protection from direct sunlight and debris while providing easy access to your vehicle.

When shopping for pergolas, make sure the one you buy is big enough to cover your car. The structure should have almost the same measurements of a garage.

How To Build A Pergola

Pergola construction requires DIY skills, but not many. After all, building a pergola it’s not like reconstructing the Taj Mahal. Once you get started you’ll discover it’s as easy as riding a bicycle.

The materials you use to build a pergola are important. It’s best to use green materials for the roof and floor. With pergola flooring, green is an effective heat mitigation strategy. Also, cool, wet roofs are better than dry roofs.

First, you’ll need four grounded posts. Next, add horizontal bars at the top. You’ll need slats for shade and support. Remember, the slats are not load-bearing.

The largest pieces you’ll handle are the uprights, which should be firm. An upright is a vertical support element like a post or stake.  It’s recommended to set the uprights four feet in the ground. If you can’t go that deep, secure the uprights with a stone or cement foundation.

The smallest pieces of a pergola are the rafters. Your rafters will run at right angles along the length of the structure. You can space the rafters evenly from each other for balance and stability.

For complete instructions on how to build a pergola, check out this easy guide: Pergola Construction Guidebook.

What Does A Pergola Cost?

A pergola costs somewhere between $500 and $5000 to buy. The cost of building one costs less as far as materials are concerned and more as far as labor is concerned.

How Do You Pronounce Pergola?

What Is The History Of The Pergola?

It’s possible that no one knows when the first pergola was built. More than likely, it was built by the Egyptian high court for a hanging garden. The word pergola didn’t appear until the 1600s.

Are Pergolas Always Attached To A House?

No. You can attach a pergola to your house or you can allow it to be a freestanding pergola. It doesn’t change the term of the structure because it is or isn’t attached to a building.

Do You Need A Permit To Build A Pergola?

It depends on your region. To be safe, you should seek out local building permits as the word “pergola” isn’t listed in many codes. Asking is your best bet.

What Is A Pergola: Wrap Up

A pergola offers many things, so before you commit to one, make sure you know what you’ll use it for. You might decide on something small and closed, and if that’s the case then a hexagonal gazebo may work better.

If you don’t require shade in your backyard space, a deck or patio would be your best bet.