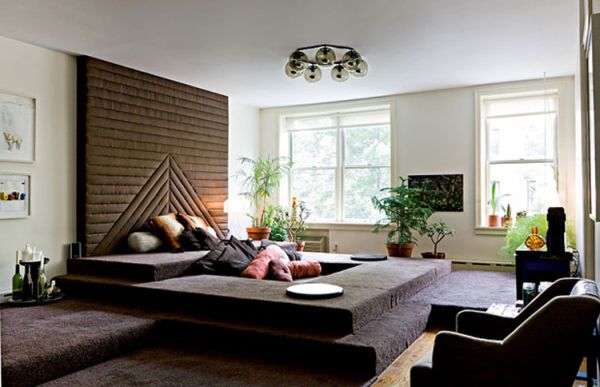 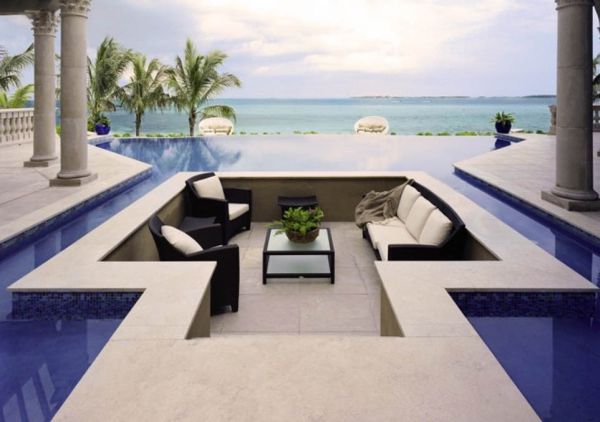 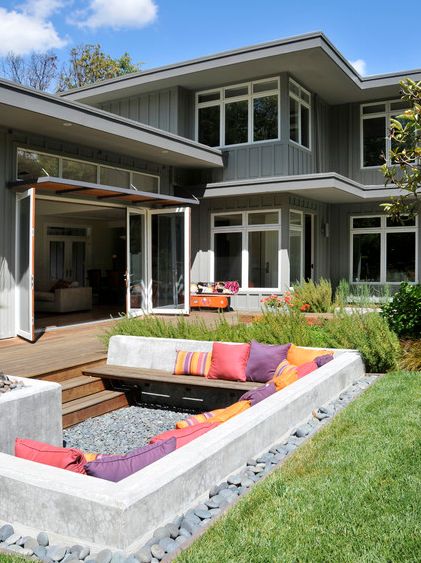 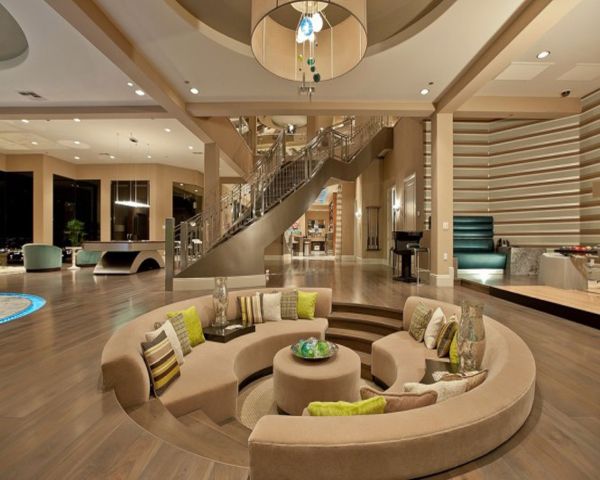 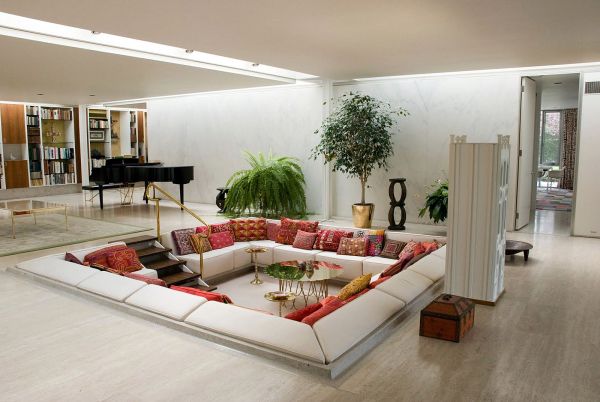 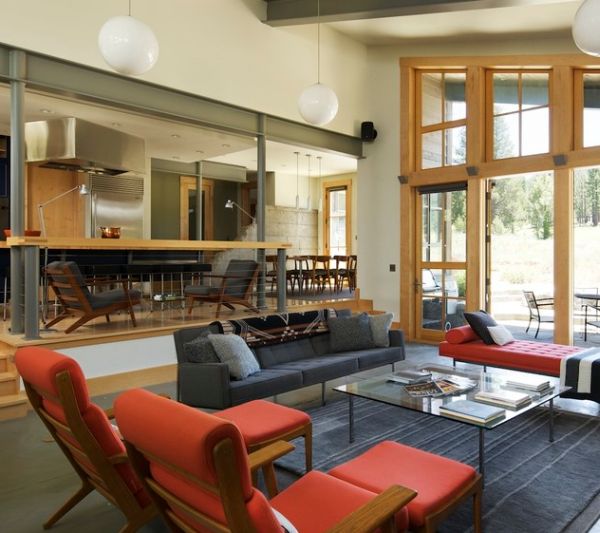 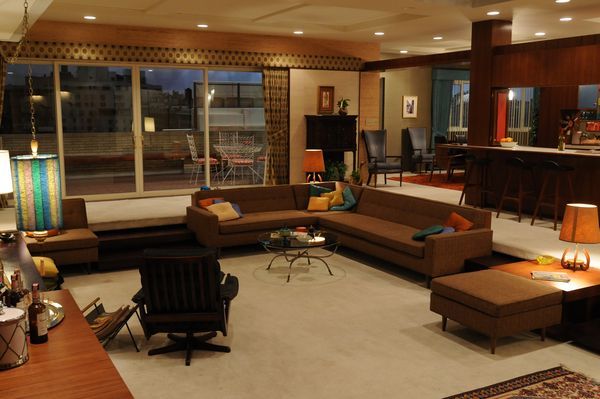 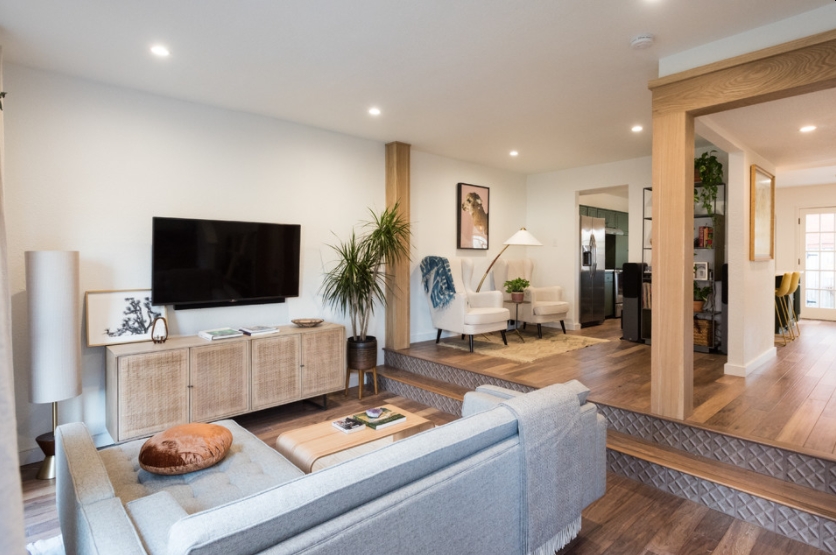 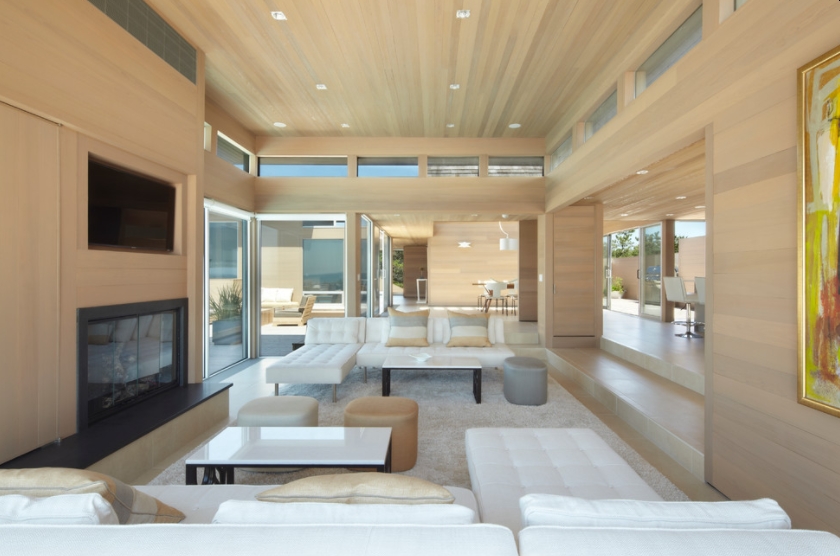 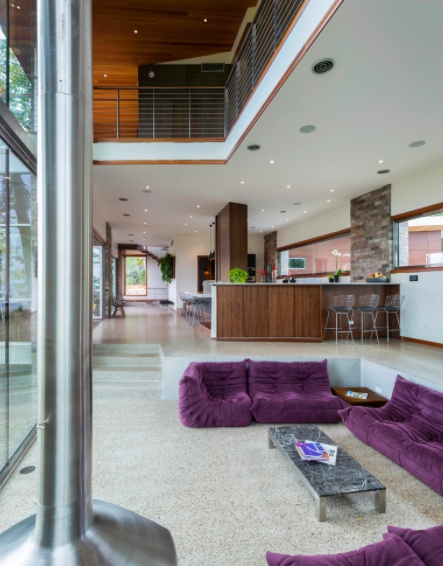 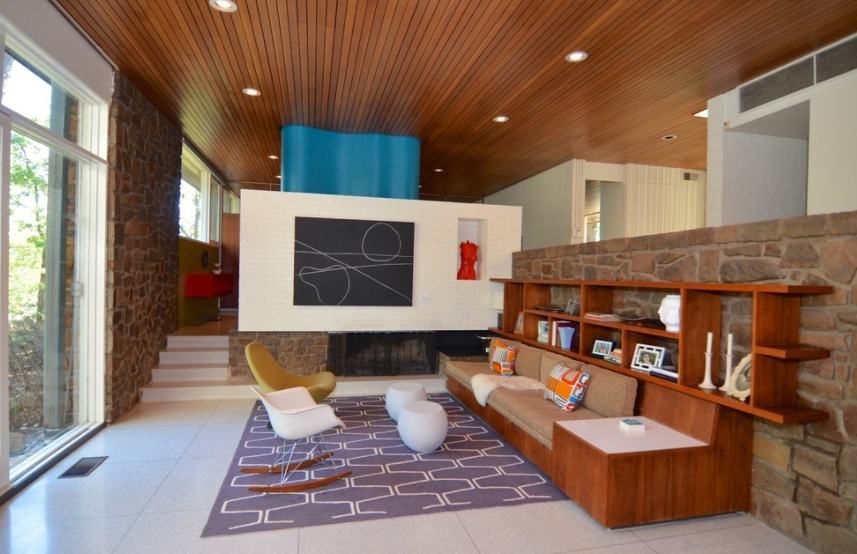 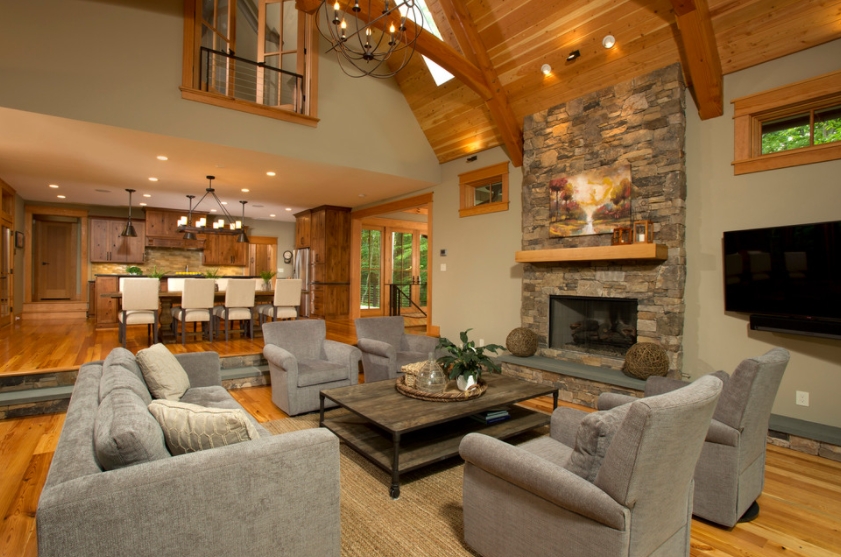 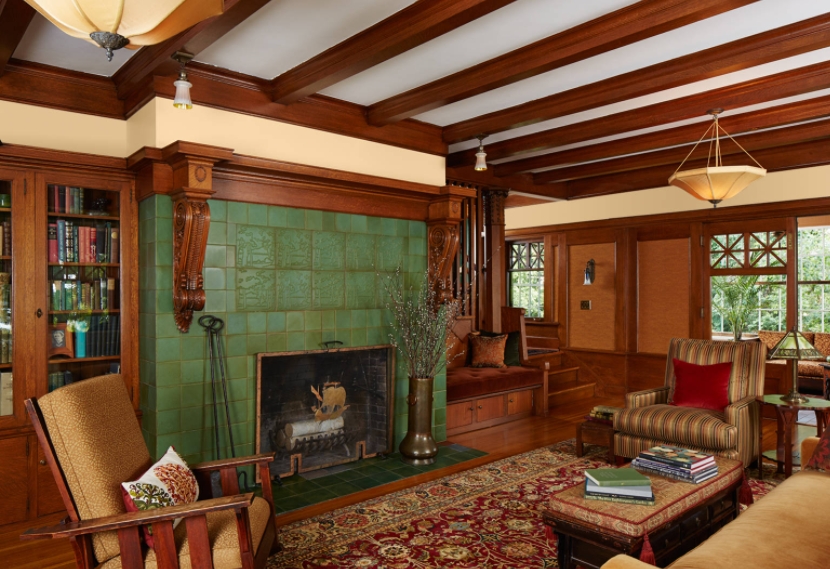 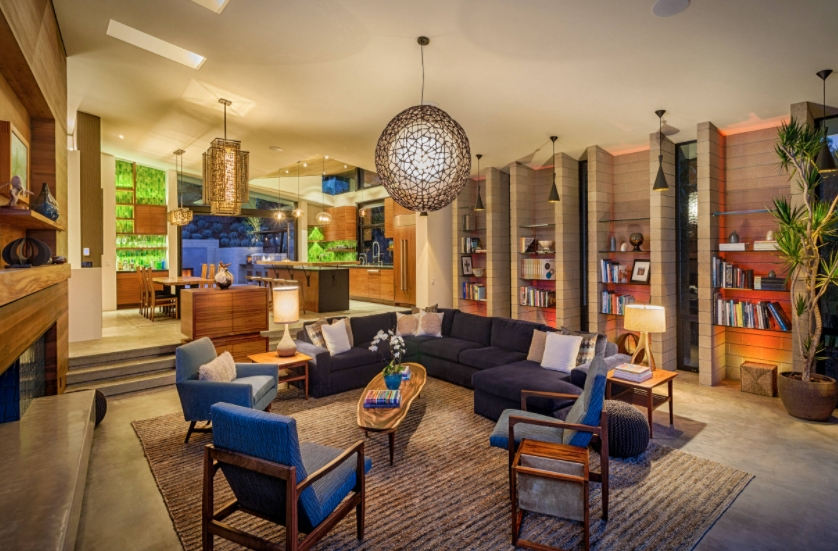 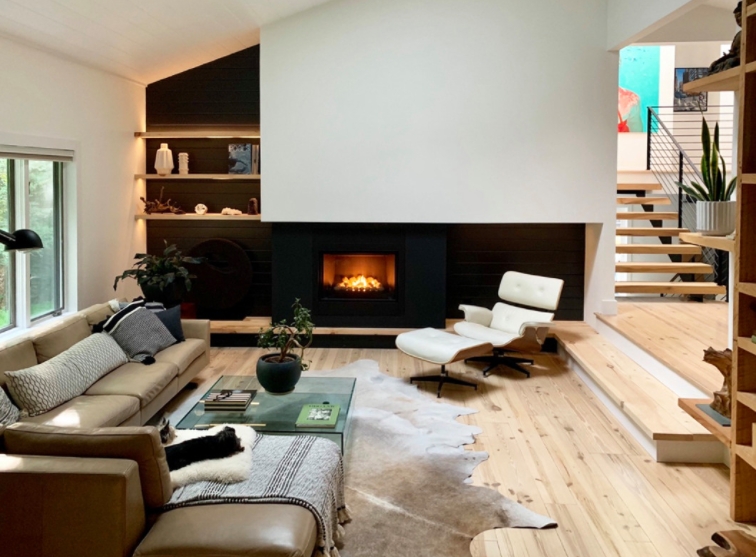 Sunken spaces are showing up everywhere from period-appropriate TV shows, like the very popular Mad Men or the old Dick van Dyke Show, to more surprising places, such as contemporary design magazines like Dwell.

How Deep Is a Sunken Living Room?

Sunken spaces can be nearly any form or size, and their depths often range from a few inches to several feet or more (with many levels), depending on the client’s preferences.

Sunken areas definitely have their advantages.

They denote the boundaries of the space

Sunken rooms are ideal for homes with a large open layout. When there are few walls, creating rooms on a lower level clearly defines the area without obstructing sight lines. The sense of openness is maintained without obliterating the distinction between, for example, the living room and kitchen.

They can impart a sense of spaciousness to a room

Sunken spaces create more space between the ceiling and the floor, which can create the illusion of an enormous amount of space. The additional space between the floor and ceiling makes it feel bigger. Additionally, installing a skylight or other eye-catching lighting fixture above the sunken area can drive the eye upward.

When compared to a box-like layout, a sunken room adds character to homes. Certain homes even include circular recessed chambers and unique woodwork to draw the eye to the details.

Cozy sunken rooms furnished with plush sofas and pillows are an excellent way to create a more intimate atmosphere in your house. Whether you want this sunken space for a get-together to play board games, watch a movie, or have a conversation, it forces your family members into a smaller space, creating a cozier atmosphere.

Like everything else on the planet, there are also a few drawbacks to sunken living rooms, such as the ones listed below.

They have the potential to create mishaps.

If you asked the majority of individuals what they’re not particularly fond of when it comes to sunken living rooms, the most common response would be that they’re inconvenient.

There is a chance of tripping and falling if you are not anticipating a few steps heading into a sunken room. While this may seem insignificant, if you live with someone who has accessibility concerns, sunken rooms might be harmful.

They are not very adaptable.

Let’s face it: There isn’t much else you can do with a sunken space and this may be the biggest complaint. While you can reuse a room for relaxing or convert it to a playroom, you are limited in terms of layout options due to the sometimes strange space.

Conversation pits will always remain in the same location and you will always be constrained by the size and shape.

KohlMark Architects and Builders swept us off our feet with this large rustic living room which is covered in gorgeous pieces that show you how luxurious the rustic style can be.

The stone fireplace is definitely one of the best things in the room and the sunken area just looks and feels extremely cozy. The upholstered furniture is a good reminder that comfortable seating is key in a sunken living room.

AA Real Estate Photography is here to show us how you can pull off the perfect setup for a mid-century modern sunken living room. The elements are ideal for this type of room decor, with the shapes, lines, and colors being perfectly on-point. The sunken space fits perfectly with this particular home design.

Michael Fitzhugh Architect is here with yet another very cool sunken living room idea, offering us the perfect setup for a cozy ambiance right in front of a glass patio wall. We love the fuzzy carpet idea and the no-leg sofas. Conversation pits like these manage to create a very intimate atmosphere in an open concept space.

In general, a sunken living room needs a coffee table not only for visual grounding but also for practical uses.

If you have a beach-themed home and want to make a sunken room happen, Bromley Caldari Architects PC has this particular suggestion for you. The coastal decor has perfectly chosen colors, offering a great entertainment area with a media wall and a fireplace.

Simple, yet very elegant; that’s how we would describe this transitional open-concept sunken living room by Wander Designs. It’s definitely the type of home design that you’d feel comfortable in during a family get-together, or even when looking to spend some quality time alone.

It has become apparent that this idea is no longer stuck in the past.  There are several great, contemporary spaces that implement this 1960’s idea, such as this home in Los Angeles. The entire living area is a sunken room, which defines its confines.

The space of the living room, while on a lower level than the kitchen and dining area, feels open and inviting, even with the hardness of exposed structure and concrete flooring.  The open, sunken living area balances the coziness of the kitchen and dining rooms beautifully. Perhaps that is one of the greatest advantages of this design concept – the feeling of openness.

Actually, with all the midcentury modern furniture, this living room looks like it came out of the classic Dick Van Dyke Show.

This feeling of openness can be achieved without raising the ceiling plane.  Take, for example, Eero Saarinen’s Miller House, built in 1957.  The living area is truly sunken, surrounded by the higher flooring of the main living level on all sides.  Converation pits like this one have all the furniture built in.

In fact, this style of conversation pit was designed in collaboration with interior architect Alexander Girard. It went on to become a midcentury fad that lkasted only into the early 1960s.

The flat plane of the ceiling appears at a modest height, yet the entire space feels more open than if the living area were not lowered.  While there are few walls, which also add to the spacious feel, this openness is in large part due to the fact that the furniture does not chop up the space. These types of conversation pits are usually found in older homes.

Another advantage of conversation pits is that they are a way to define a separate space without using walls.  Consider another area with an inviting recessed circular seating area.  The conversation pit seems very intimate, though it is part of a very large space overall.  The space is defined not only by the recessed floor but also by the curved seating and the repetition of the circular forms on the ceiling with the vault and lighting fixture.   A cylindrical space is formed within the larger rectangular room, giving an intimate place of repose.

Sunken seating areas are not just for the interior of the home but can be great outdoors.  This recessed patio area reinforces the geometry of the architecture while providing a functional area to sit and relax outside.

One last advantage to sunken seating is the added drama that it creates.  This recessed seating peninsula is a conversation pit and serves as a prime example.  The sitting area would still be lovely if it were at the height of the pool, but lowering it below the waterline gives this space dramatic flair without interrupting the beautiful view.

Scale:  Too large for the Room

With the many advantages to sunken living rooms, one has to wonder why they went out of style at all.  In truth, there are several disadvantages. For instance, you have to consider scale in your living space. If only a small space is recessed, it will have a claustrophobic effect, much like sitting in a bathtub.

Another disadvantage of sunken living rooms is the lack of flexibility of the space. Furniture cannot be rearranged and the floor will always have a “hole” in it, making it useless for any other function. And one final, however important, disadvantage:  A conversation pit is more costly to build.

How Do You Fill a Sunken Living Room with Concrete?

While filling a sunken area with concrete is hardly rocket science, there are a few critical things to consider.

When operating beneath a roof where there is no ground to absorb moisture, it is critical to enable moisture to escape through the top. Premature troweling will cause the slab’s corners to lift.

This is referred to as curling. If this occurs, hollows will form beneath the new slab in the corners. Concrete removal may be necessary to complete the repair effectively.

Proper technique cannot be substituted. However, you can reinforce it by doweling rebar into the existing foundation’s sidewalls where practicable. Drilling rebar 6 inches deep in increments of 20 to 24 inches provides wonderful peace of mind.

The most critical thing you can do is reinforce the concrete with microfibers. This wicks the water to the surface, where it can safely leave. The micron-sized particles ensure a squeaky-clean finish. If your contractor is unaware of this fact, it is something you should definitely mention.

Expansion joint technology has advanced significantly. With an evolving product like this, it’s simple to identify the dinosaurs among your pool of prospective contractors. Fiberboard is not a suitable substitute for polyethylene seals or rubber expansion joints. If there is a leak of water, the fiber will act as a mold trap.

What Is the Point of a Sunken Living Room?

Sunken living rooms exude grandeur, as anyone who has ever visited one would attest. The most significant places are typically up, not down, as indicated by level adjustments used by architects for thousands of years. In fact, sinking a section of a space can give it a more intimate sense while simultaneously adding height.

Living rooms with sunken floors were extremely popular in the 1960s and 1970s. Sunken rooms were popular during a time when many social gatherings were held in people’s homes.

Is a Sunken Living Room Expensive?

For the most part, furniture pieces in sunken living rooms are built-in. The seats could be constructed from oak, stone, concrete, or any other durable material that is available. As is customary, built-in seating is always tailored to your area and needs. That is why putting a sunken room in a new home can be quite expensive.

The cost of raising a sunken living room to floor level varies between $5,000 and $25,000 or more, depending on a variety of different factors.

Sunken rooms – living areas that are a few steps below the rest of the house – date all the way back to the 1920s. Nonetheless, the style did not truly gain popularity until the swinging ’60s.

Sunken rooms, or conversation pits were the envy of the neighborhood at the time. Created to infuse homes with a sense of intimacy, these sunken areas crammed guests and families into a small, cozy space.

While sunken rooms are less common today, the form has experienced a renaissance. If you purchased an older home, you may have inherited a sunken room.

Or perhaps you’re looking for a one-of-a-kind design element for your own home. In either case, it may be time to reconsider how we view sunken rooms and conversation pits.

Opinions vary, but it’s clear that the concept of a sunken living room is not dead. In fact, these sunken spaces can help define the living space in an open floor plan without adding walls.

While this design approach has its pros and cons, if the idea really appeals to you, then go for it. You and your family will benefit with many cozy times spent together. Actually, with the correct decor and design, your sunken room may easily become the favorite space in your new home.