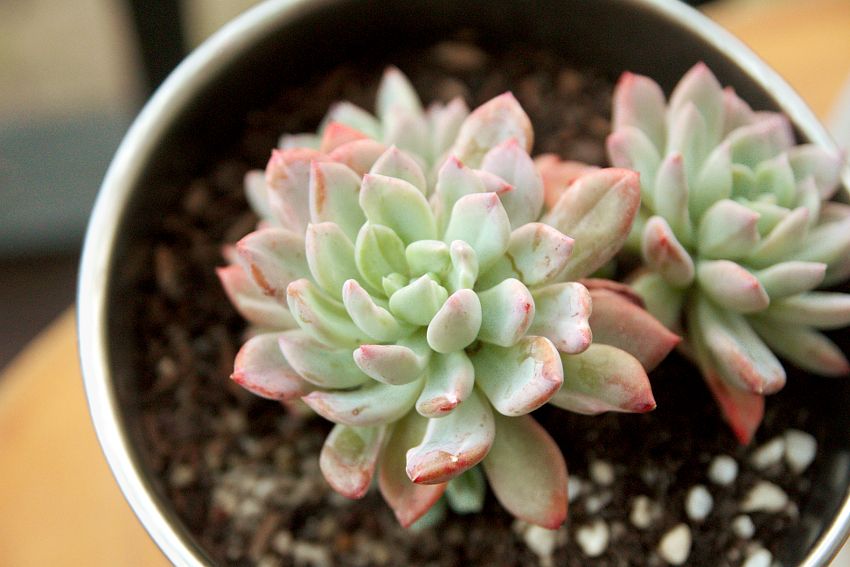 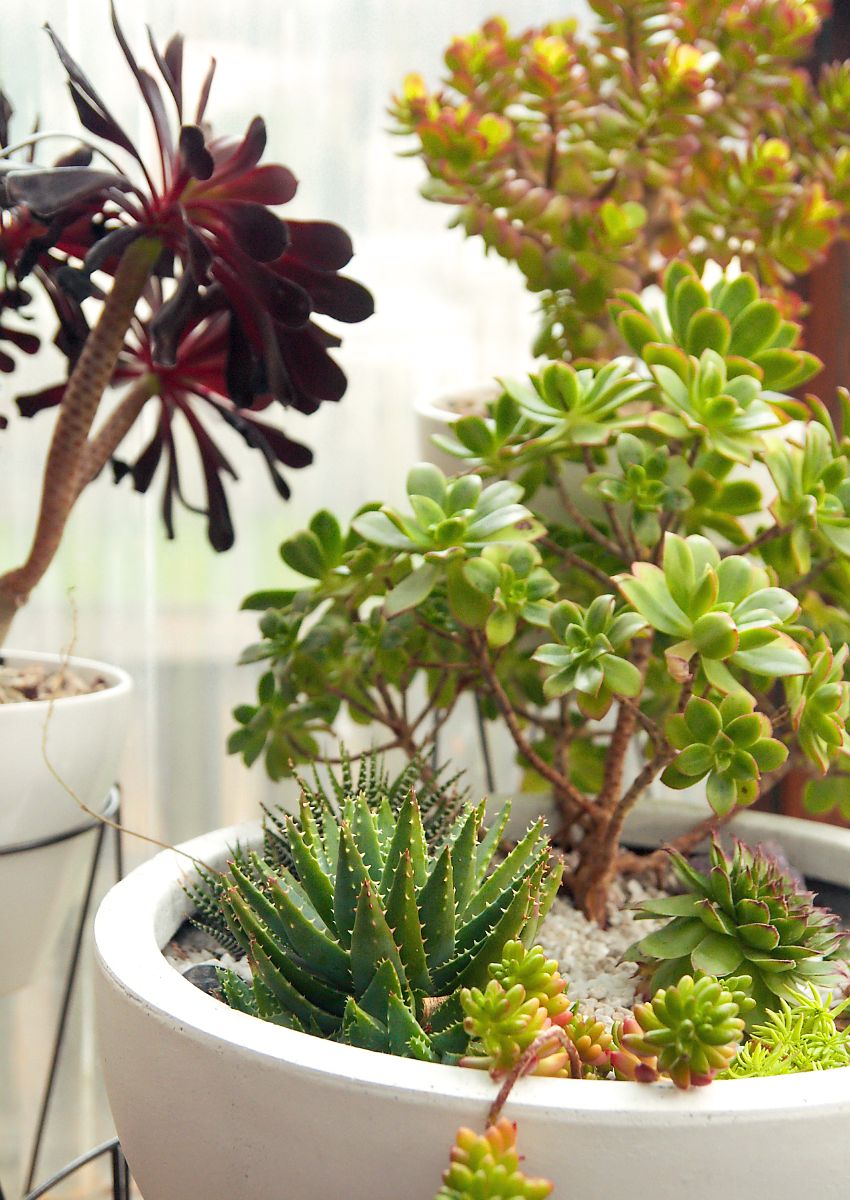 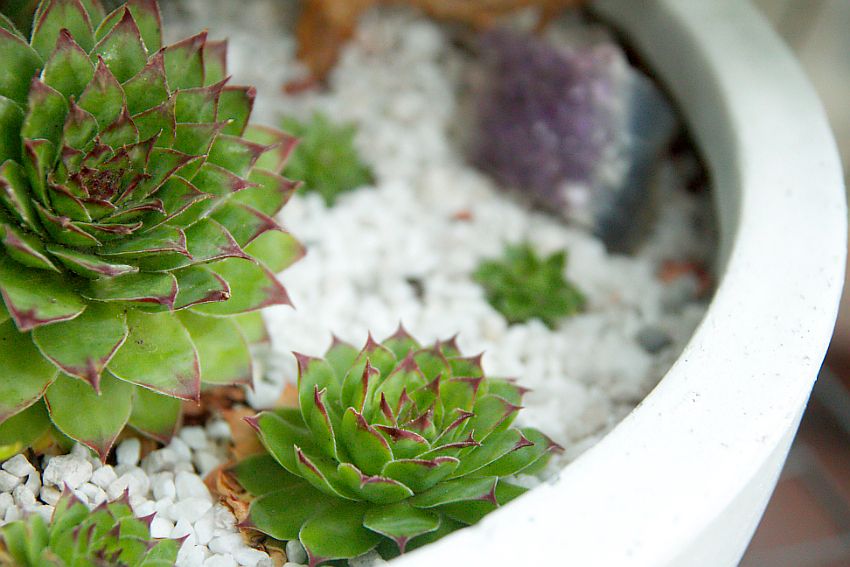 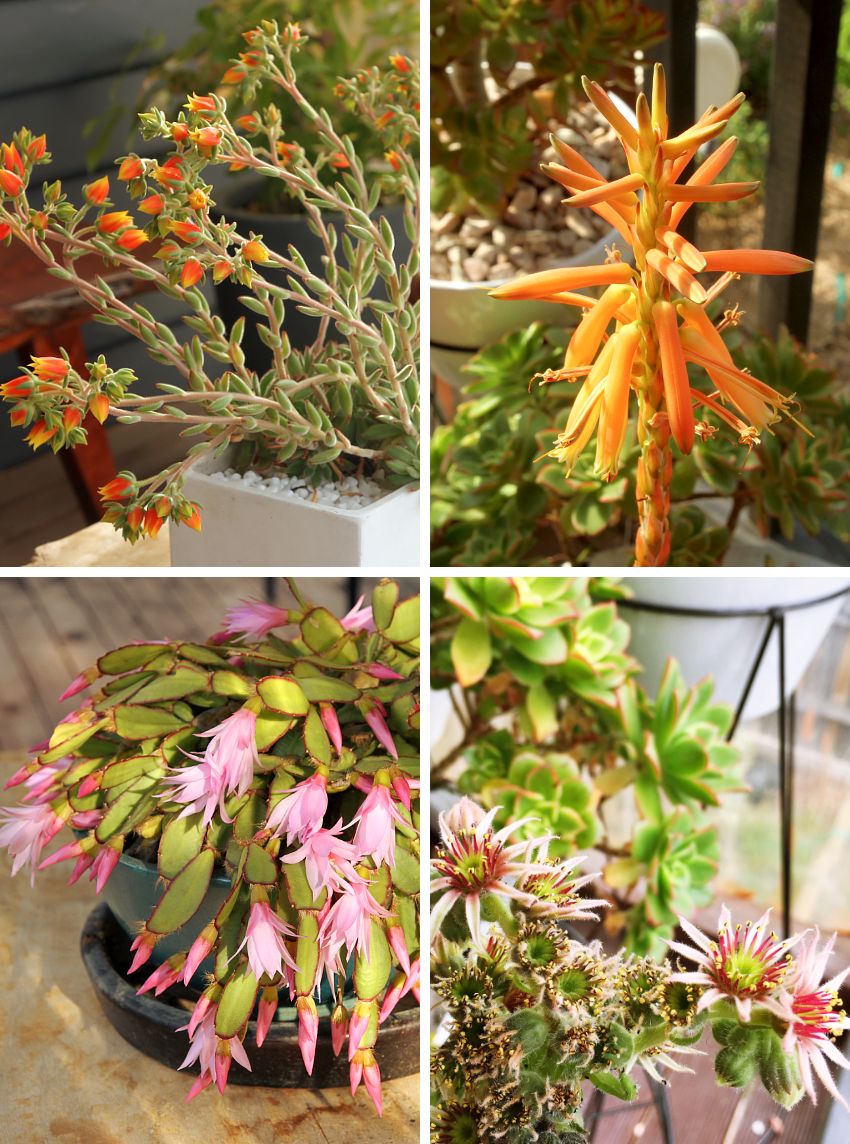 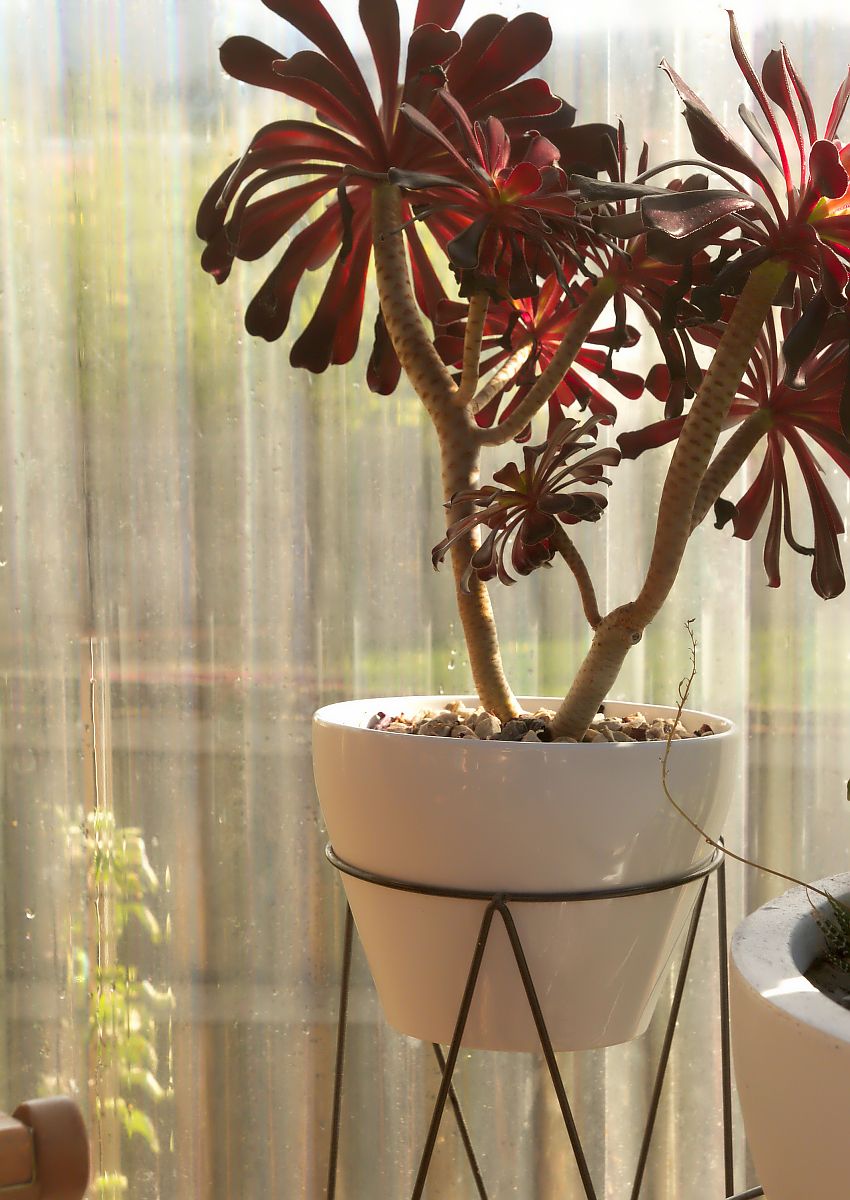 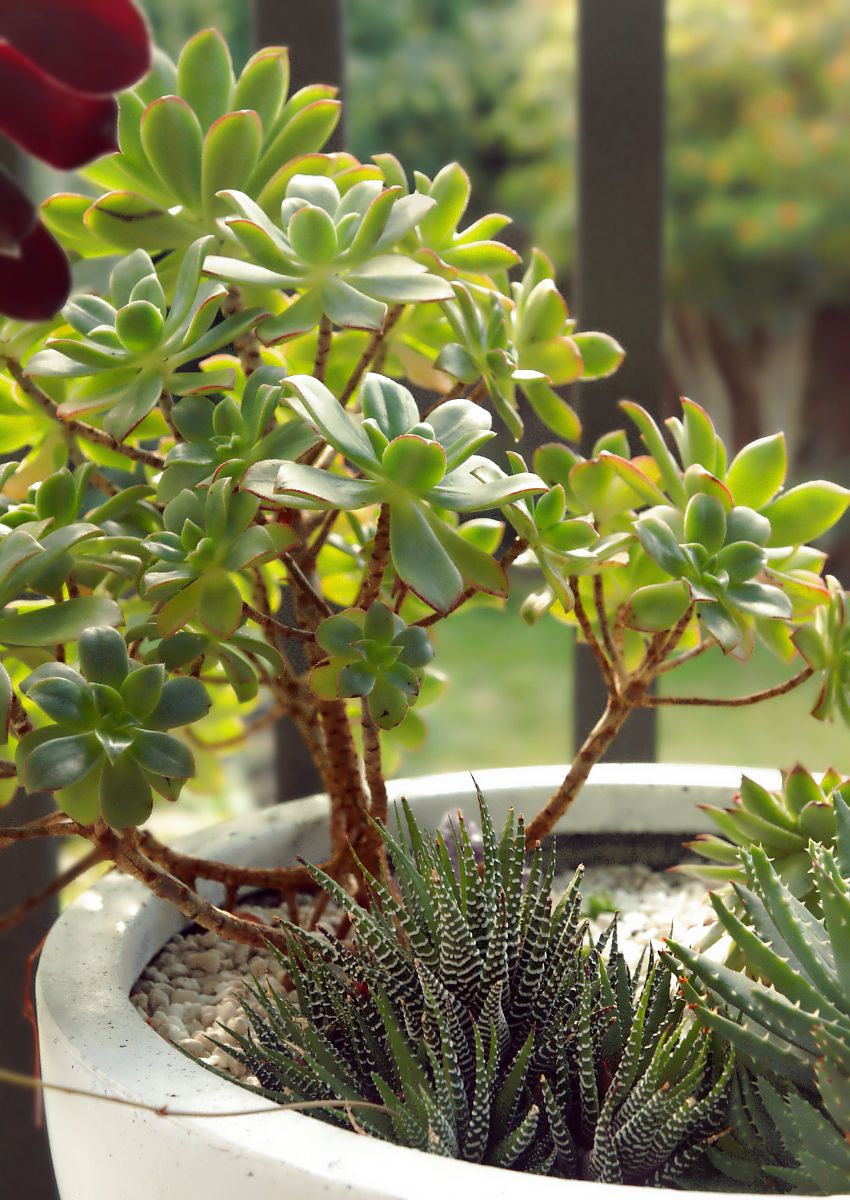 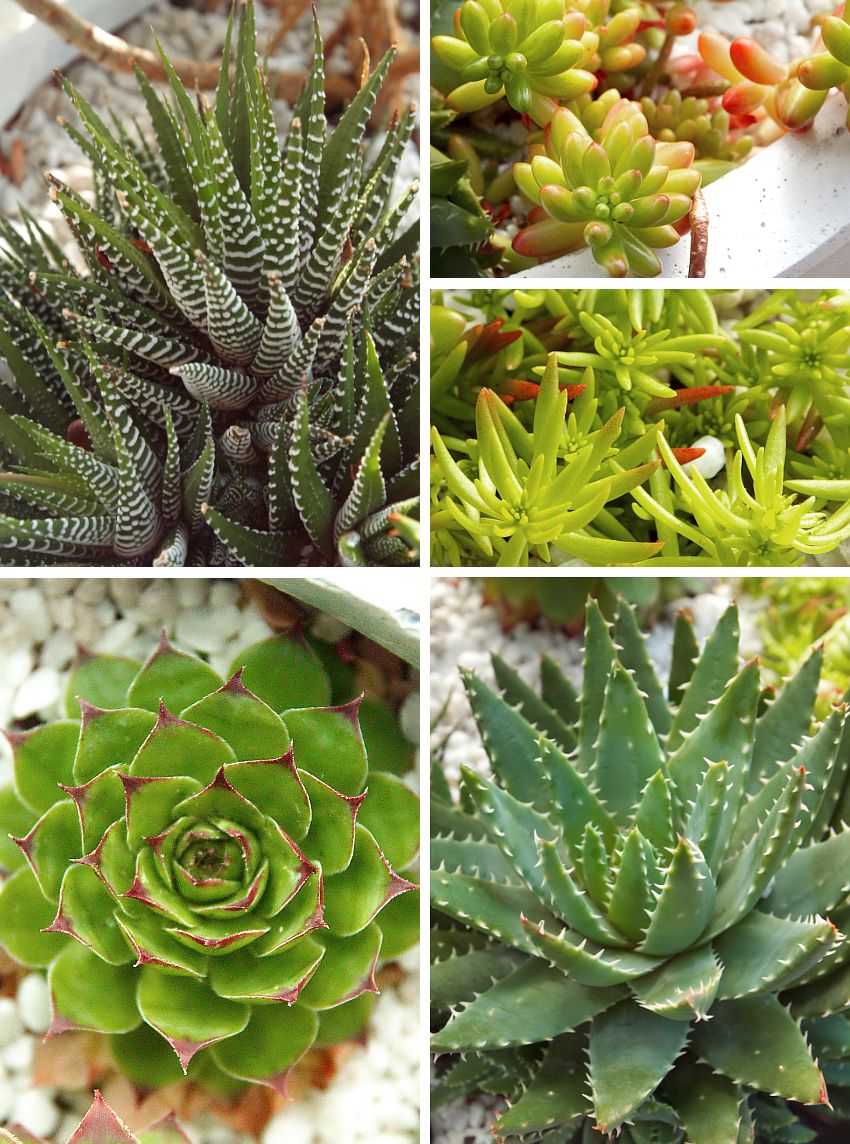 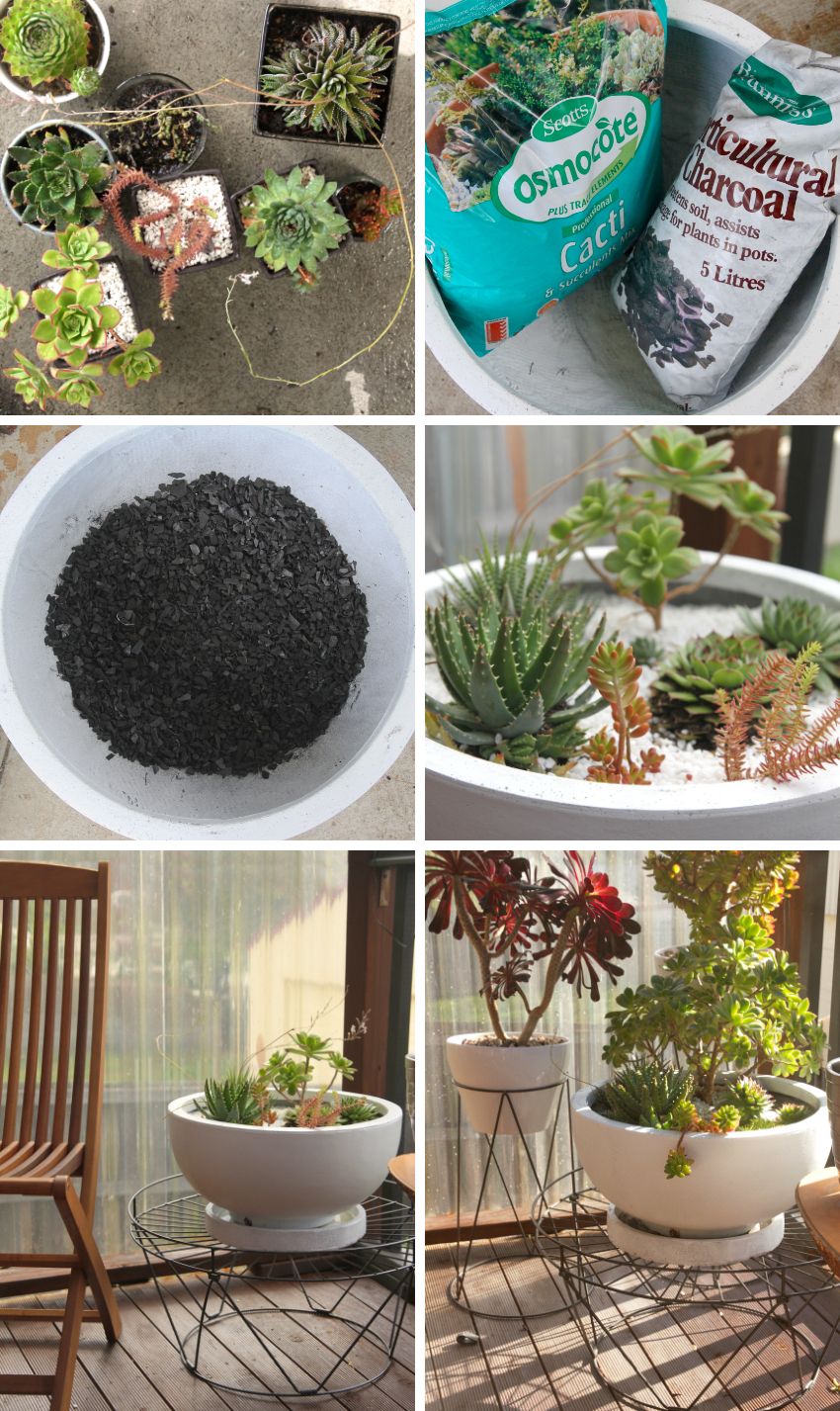 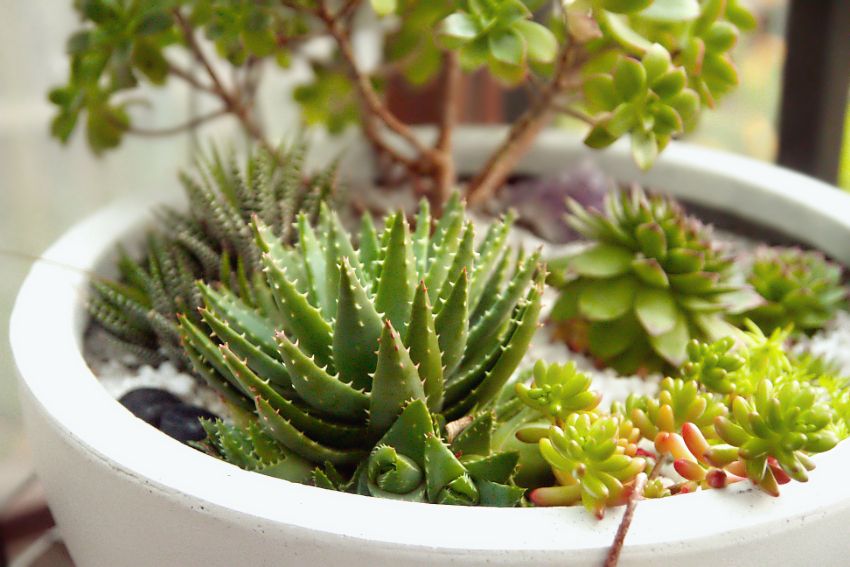 You can’t just collect one succulent. You need two, or five, or two dozen. Many succulents are well-suited as potted plants, and the dazzling variety of forms and colors will make you want to keep adding more into the mix. Here is a simple guide for planting an arrangement of succulents, propagation and care… as well as introducing you to a few varieties to get you inspired.

And in case you’re doubting how quickly a succulent planter can fill in… the bottom two photos were taken one year apart. (The two additional planters are my doing, though.)

You can create a container garden by filling a planter with succulents. Think contrasting elements of design: size, shape, color, texture. This creates visual interest as the succulents grow into one another (but don’t forget to leave the plants some breathing room). The tactile quality isn’t just visual, either – I also like examining their surfaces with my fingers, even the toothed edges of the aloe.

This Aeonium ‘Tricolor’ grew quickly to a height of 30cm (12″), where it took on a open-branched habit with a solid trunk, in stark contrast to the clumping plants underneath. It has a yellow/green/pink coloration that grows stronger in summer.

This Aeonium ‘Zwartkop’ (‘Schwartzkopf’) needs a pot to itself, as this species can grow to 4ft in the ground (though smaller in the pot). These striking purple-black plants are very easy to grow in warm, dry climates, although they like a dash of extra water compared to other succulents.

Succulents are known for their colorful foliage, but their flowers are also worth your consideration. The flowers can be a surprise when they appear, as not all of them bloom in summer, and some of them are absolute show-stoppers.

You can try planting a mass of succulents in one location to create a wall of solid color – echeverias can be planted as a spreading groundcover that produce many orange flowers raised on stalks, while Sedum ‘Autumn Joy’ are cultivated for their pink and purple blooms.

I’m lucky enough to live in a climate where I can grow most succulents outside year-round (USDA Zone 9b; read more about hardiness zones here). Some succulents are hardy enough to withstand below-freezing temperatures; in fact, certain varieties of sedums and sempervivums can even survive to -25º F (-32º C). More fragile succulents can stored indoors or in a cold frame over winter, provided they have enough light and they’re safe from frost.

Some succulents, like jades and Christmas cacti, actually won’t bloom unless they meet a cool temperature requirement. Leave these outdoors until the first frost.

As for succulent coloration, this can be brought on by cold weather, water stress, or both. Many succulents take on different color tones from summer to winter, like this echeveria which turns pink over the summer and fades to a pale blue in cooler weather. Basically, don’t treat your succulents too well; neglect = better coloration.

Succulents are easy to strike from pups (offshoots that grow from the base) or even from leaves. Place one end of a broken-off leaf into just-dampened soil, and within a few weeks it will develop roots. It’s dirt cheap to collect baby succulents! I’ve been filling in this planter with mini sempervivums as they appear.

By the way, if you’re wondering about the difference between echeverias and sempervivums, which strongly resemble one another, here you go: Sempervivums are known as ‘hens and chicks’ because they produce so many pups. They continuously reproduce from these offshoots, and once they flower, they die. Echeverias flower each year, but they’re also less frost-hardy. Either way, you should definitely enjoy the show.

Have fun with your plants and happy succulent collecting!