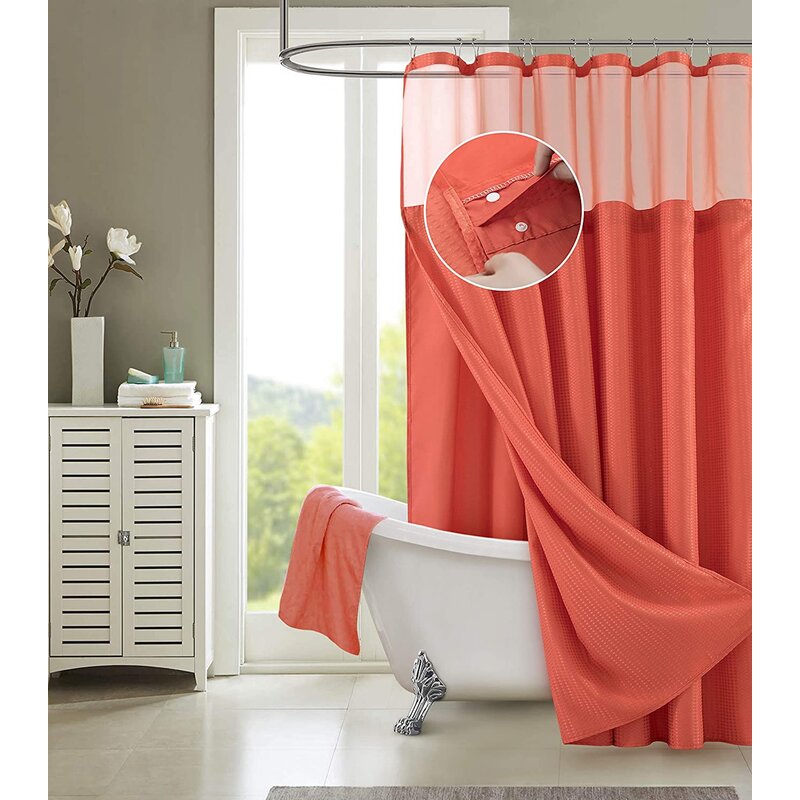 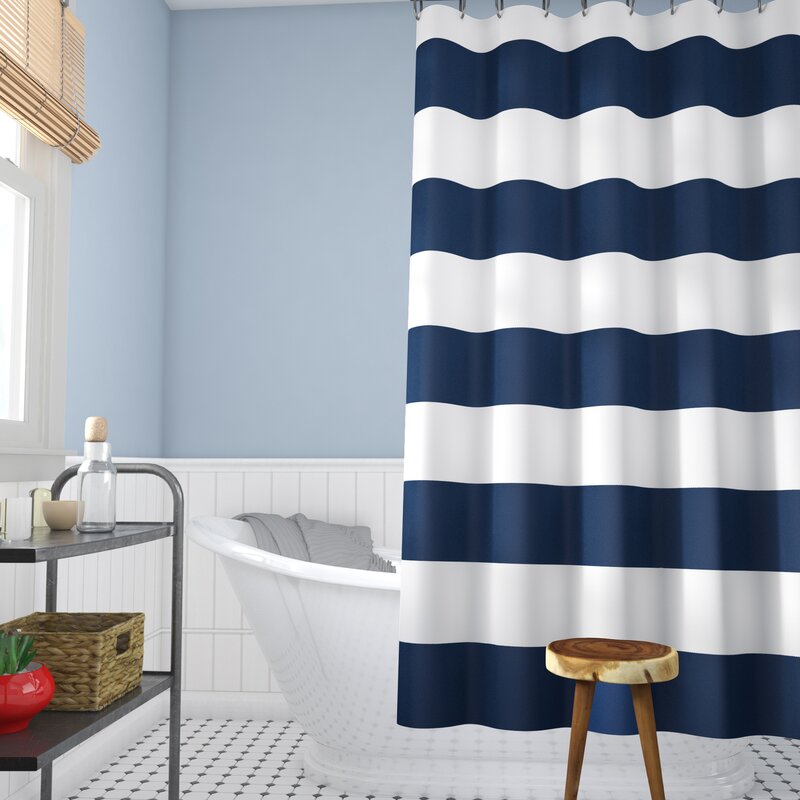 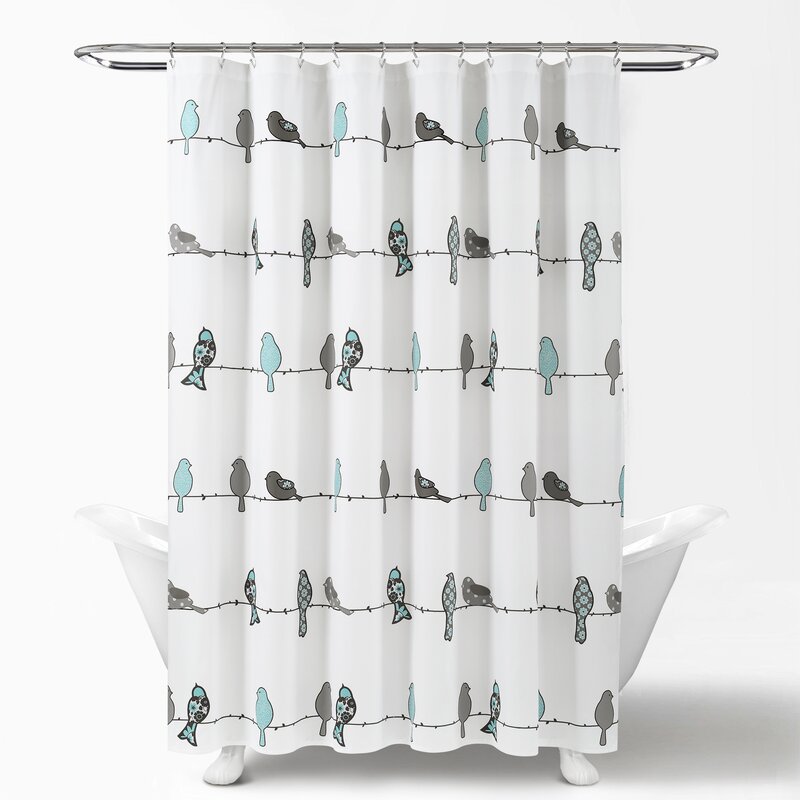 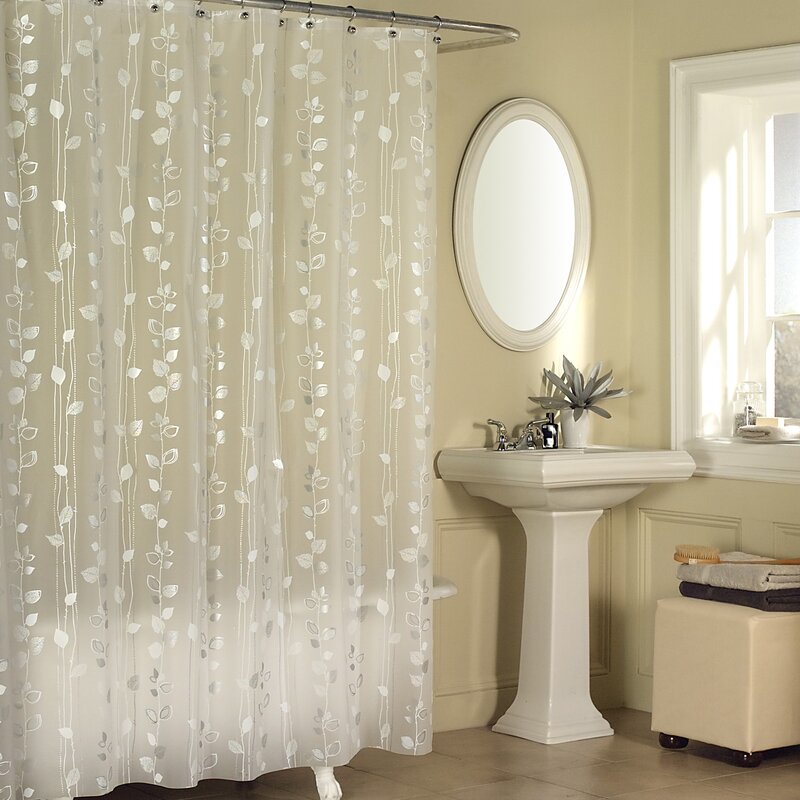 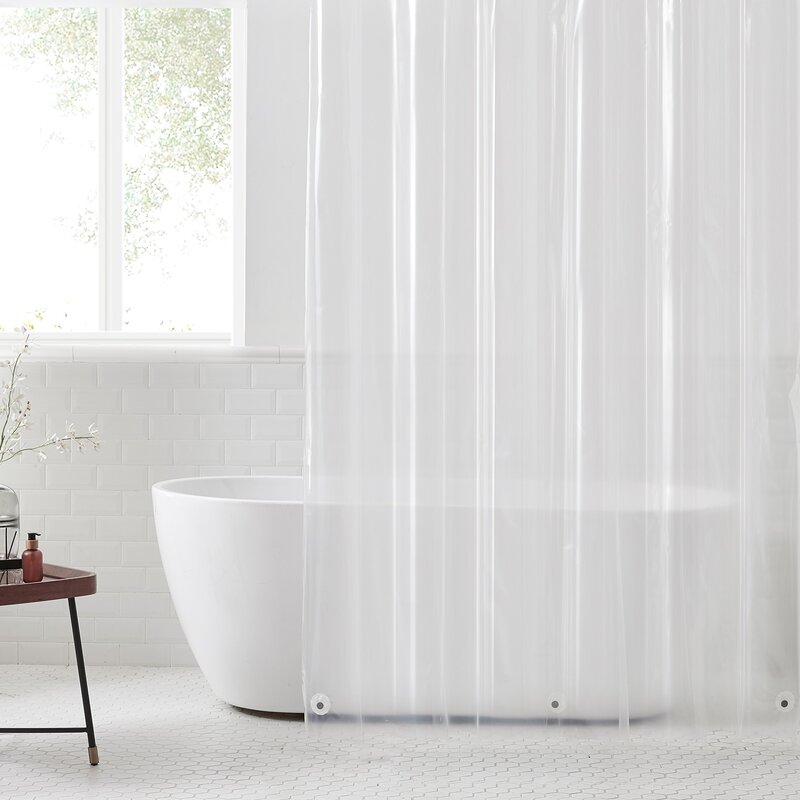 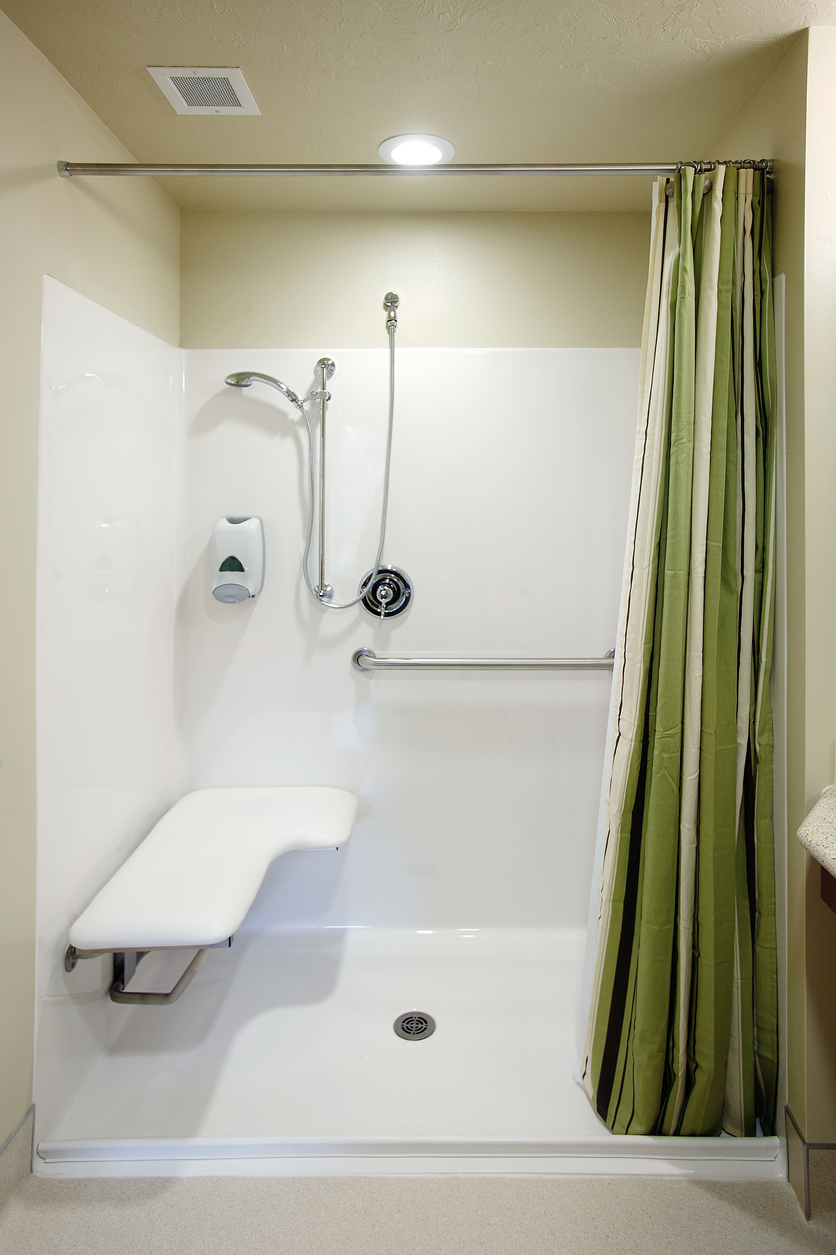 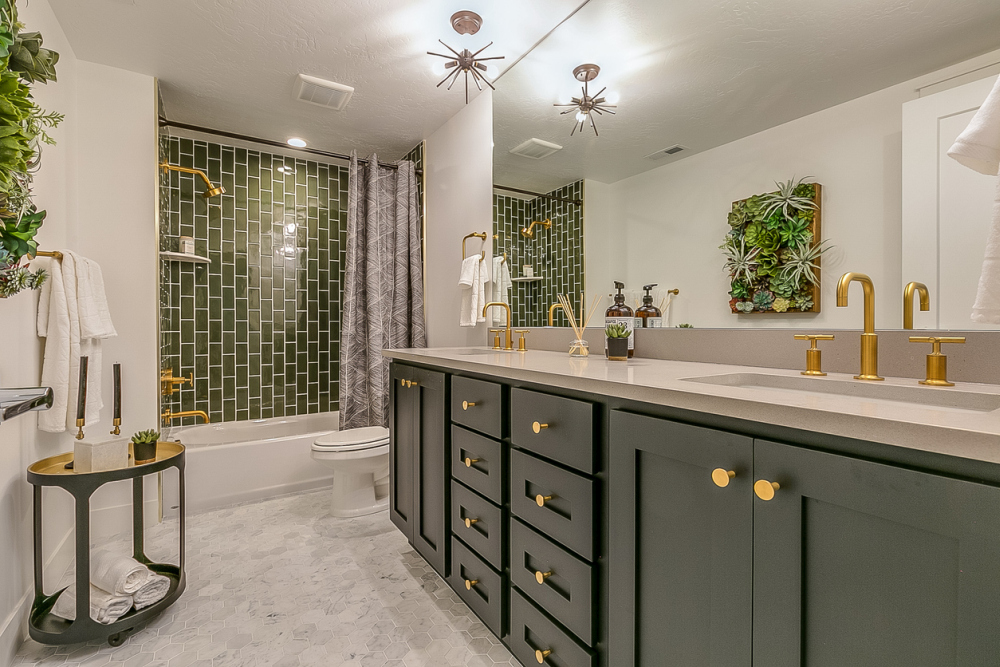 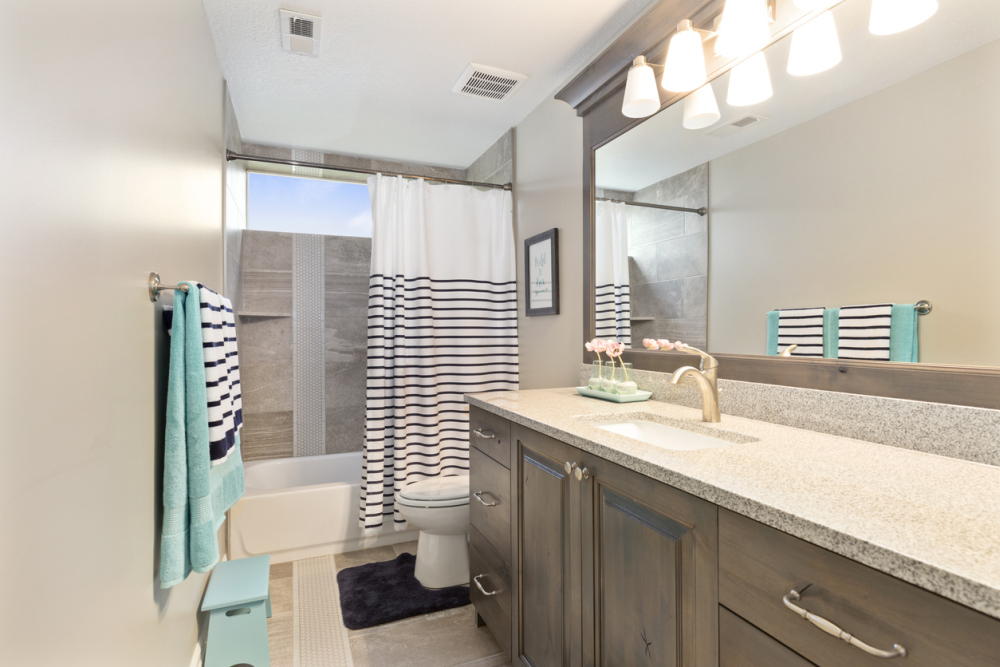 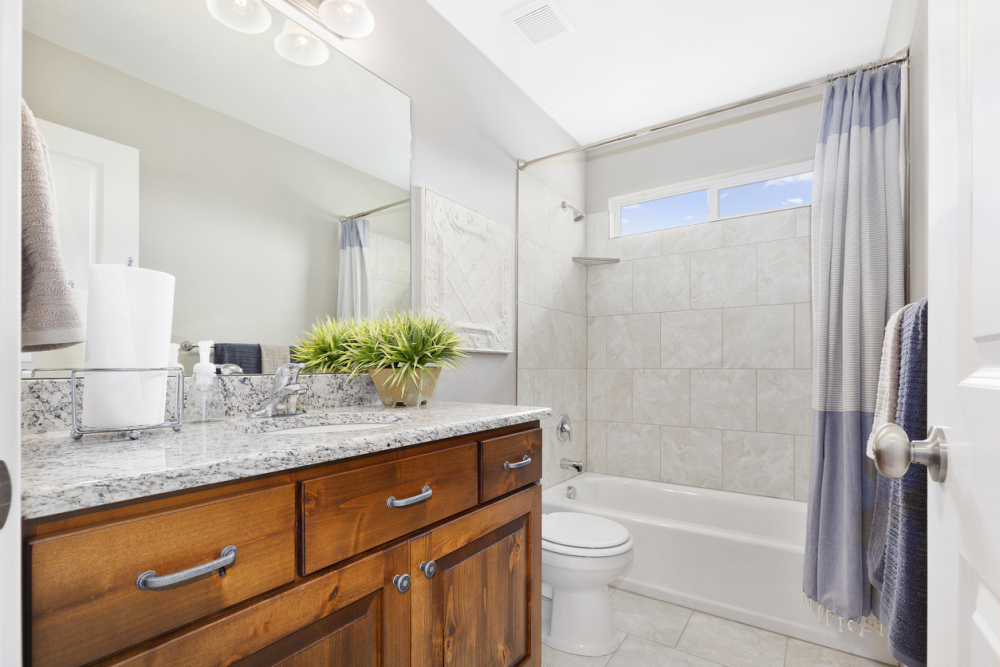 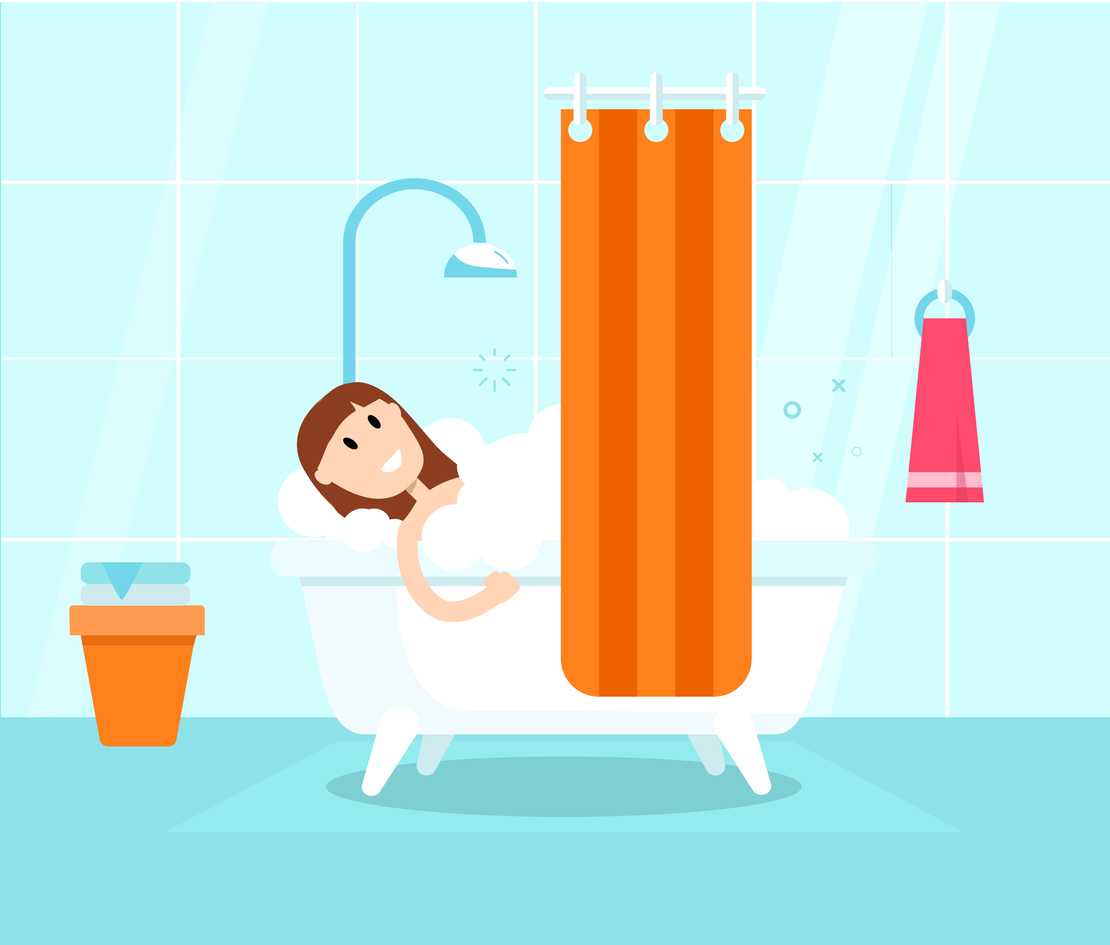 The standard shower curtain size feels like it is always changing. Most bathtubs and shower/tub units have a shower curtain. But did you know that there are different shapes and sizes of shower curtains?

While most sizes are fairly standard, finding the right size for you is important. Let’s look at the standard shower curtain size and find out once and for all where you stand.

Shower curtains aren’t just there to look good. They prevent water from getting out of the tub or shower as well as give the user some privacy as they shower. Not having one can ruin your bathroom floor and become a hazard.

Preventing water from pooling on the floor is important in a bathroom. No matter how dextrous you may be, a slippery bathroom floor is very dangerous, especially if you have tile or stone/ceramic furniture.

There are other alternatives to showers, such as waterproof doors or simple glass panels that cover the majority of what a shower curtain would. But shower curtains are by far the cheapest and most popular option.

This is why the standard shower curtain size is so important. Without the right sized shower curtain, you could be putting everyone who uses your shower at risk, and that’s not something you want to do.

The standard bathtub dimensions are 32 inches wide and 60 inches long. So a shower curtain for the bathtub is usually around 72-inches. And one for the shower is about 48-inches since the average shower is 36-inches wide.

However, the length needs to be taken into account too. You can either mount the shower curtain near the ceiling or the top of the shower. But most shower curtains are made to be cut if need be so you can customize this length.

How To Clean Shower Curtains

Dirty shower curtains can really bring down your bathroom’s aesthetics and how clean it looks. While most people fight their shower curtain by trying to clean it on the rod, the easiest way is to just wash it!

Most shower curtains can be removed from the rod and have the rings removed. Then you can just throw it in the washing machine with a couple of towels. Add laundry detergent and a little baking soda.

Then, when it’s time to rinse, add vinegar. After they are done washing, hang it back up. It will dry naturally. If the shower curtain has any mildew built up, add a little bleach to the cycle to get rid of it.

To ensure you have to wash your shower curtain less often, spray it with vinegar and baking soda once or twice a week at least. This will be easy maintenance and doesn’t even need to be washed off each time.

For your shower curtain, you should get one that is at least a few inches longer than your shower or bathtub is. However, when it comes to length, you don’t want it to touch the ground, or at least just brush it.

If the shower curtain pools on the floor, it is a hot seat for bacteria to grow. To prevent this from happening but getting one the right length or cutting it off after you get it.

Your shower curtain needs to stick to your tub if it is a tub/shower unit. You can get a shower curtain with magnets or simply rely on water to help it stick. Just make sure that it is the type of shower curtain designed to do that.

The reason that sticking is important is that it helps younger people especially to prevent water from getting away from them and leaking out of the shower. But keeping a good shower curtain liner can do this as well.

Speaking of design, a shower curtain can make a bigs statement. You want your shower curtain to match the interior design of your bathroom. Shower curtains without loud designs can be too much but simple designs are usually perfect.

Also, if you don’t have light in your shower, you probably want a thinner and lighter-colored shower curtain. Not having light in the shower can be quite a hassle and get old pretty quickly.

There are many different materials for shower curtains. Plastic shower curtains are cheap but usually need to replace it a couple of times a year. Something stronger like polyester can last much longer, saving you money in the end.

Shower curtains are not expensive. Even the nicest shower curtain won’t set you back more than $80. However, only spending $5 on one will probably ensure that it only lasts you a few months and causes you problems.

Find something in the middle for the best deal and efficiency. Something in the $20 to $60 range is going to be your best bet, though getting slightly out of that range never hurt anyone either. So look for sales!

If you’re on a strict budget, you won’t find a better option than this. This shower curtain by Wayfair’s own brand is under $15, usually under $10 during sales. It’s simple and you can get it in both clear and frosty.

While other more expensive options will look higher-end. This will do the job right and will give you something to cover your shower with at a price that you can feel really good about. Get a couple to stock up while they are on sale.

Here we have another affordable option that you won’t regret. The gorgeous ivy on this Medina shower curtain matches most decor styles. It’s less than $30 on sale which is a great price for a shower curtain like it.

Because it is vinyl, it should last a good amount of time and can be cut to fit very easily. Thinner shower curtains are actually harder to cut than thicker ones because they cut jaggedly unless you have really great scissors.

Another winner from August Grove, the Recio shower curtain comes in five different colors, all with a non-offensive white background with different colored birds on each. This is a peaceful and attractive choice.

The most popular choice is blue because the bluebirds go well with any design style as this type of blue can be considered neutral. If there’s one room that should be peaceful, it’s the main bathroom.

This Beachcrest Home choice is a great one. It comes at a great price and is a bold choice for a beach house look. However, if you have a beach-themed bathroom and want to go bolder, it’s perfect for you.

That said, this type of striped shower curtain isn’t limited to beach houses. It can be used in any bathroom with the right color theme. You can get this one in navy and white, along with two other colors.

If you can spend a little more than expected for a shower curtain, this double-layered one will eliminate the need for a liner because it has a built-in, matching liner. This is smart and will end up being worth the money.

You can get it in five different colors, which almost guarantees you can find a color to match your bathroom. Each of them is gorgeous so you won’t be sacrificing style in order to get a protective shower curtain you love.

Finally, we have this gorgeous two-toned shower curtain with buttons that are super adorable. You can get it in twelve different colors, all with beautiful natural-toned buttons to ensure it remains sophisticated yet down-to-earth.

People who buy this shower curtain fall in love with it, which says more than anything else about it. Buyers love it! That is what is most important in a product, that consumers recommend it to other prospective buyers.

What Is The Standard Size For A Shower Curtain Rod?

The standard shower curtain rod is around 76-inches. But you should probably hang them around 72-inches high. This all depends on the height of your shower, ceiling, and shower curtain, however.

Can I Get A Custom Shower Curtain?

Yes, you can. You will definitely pay more and a better option would be to get a large shower curtain and cut it to your size. But if you can’t find one, there are a few stores that can make you a custom shower curtain.

How Do I Clean My Shower Curtain?

Cleaning your shower curtain may not be easy. But you can use a shower curtain cleaner to do so. Or, a tricky vinegar wash can take care of the job fairly easily. So spray it on and let it soak before rinsing.

Do I Need A Shower Curtain Liner?

The short answer is that yes, a shower curtain liner can prevent accidents and protect both your floor and your shower curtain. So don’t leave it out. Instead, use the liner and replace it as necessary.

When Do I Know The Shower Curtain Is Right?

If you can check off all of the boxes, then there’s a good chance the shower curtain is right for you. So, if there are one or two things missing, then ask yourself how important those things really are to your family.