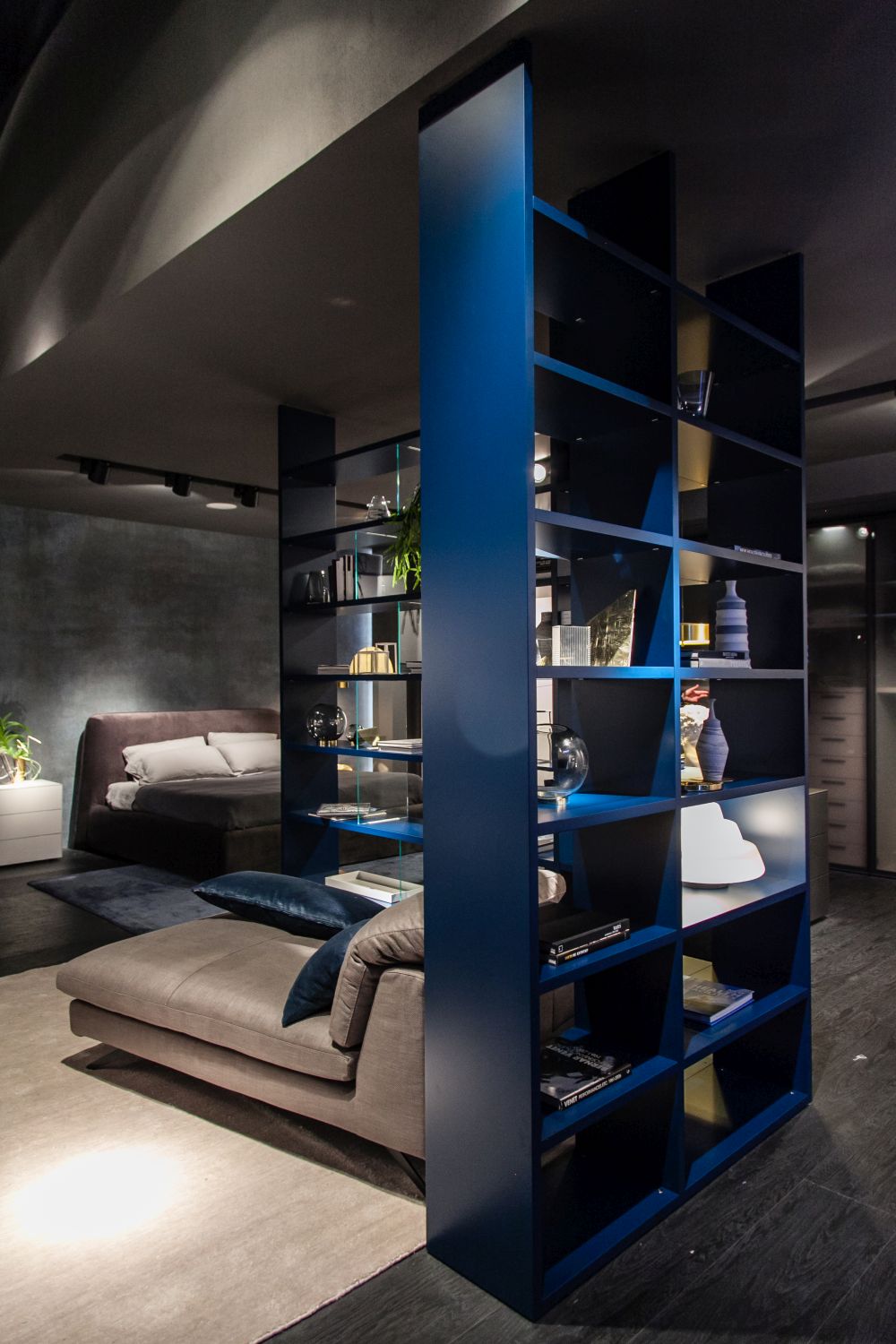 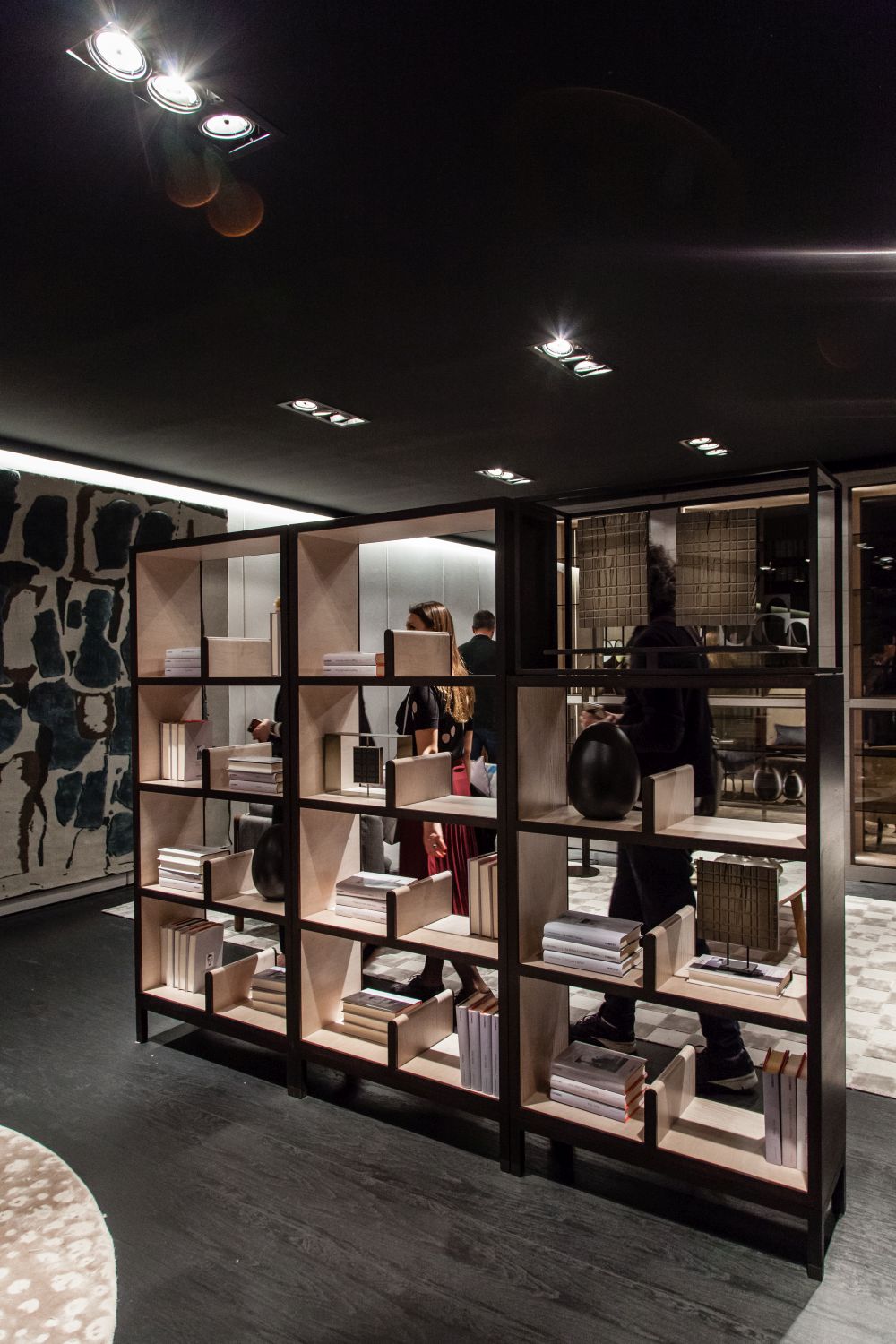 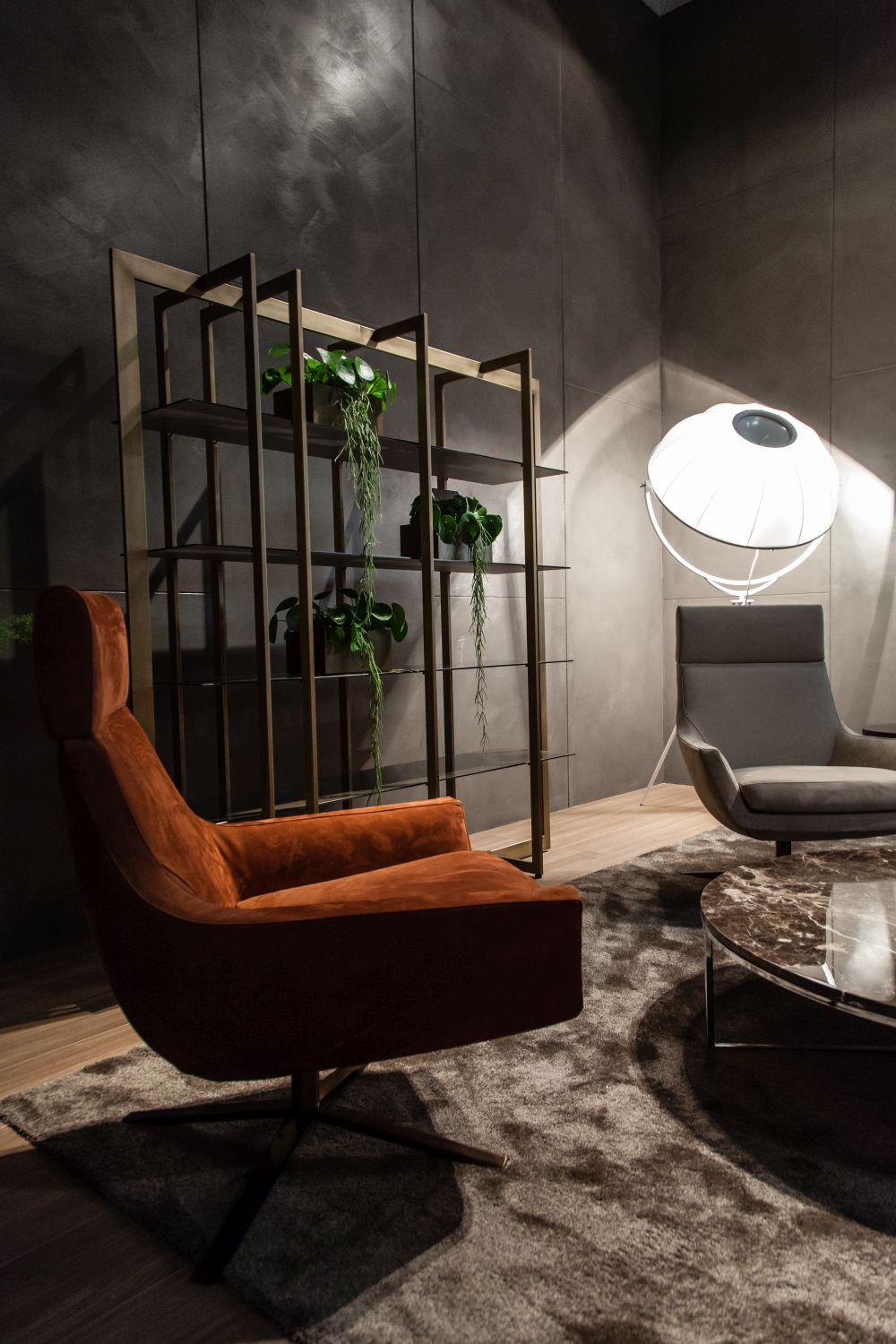 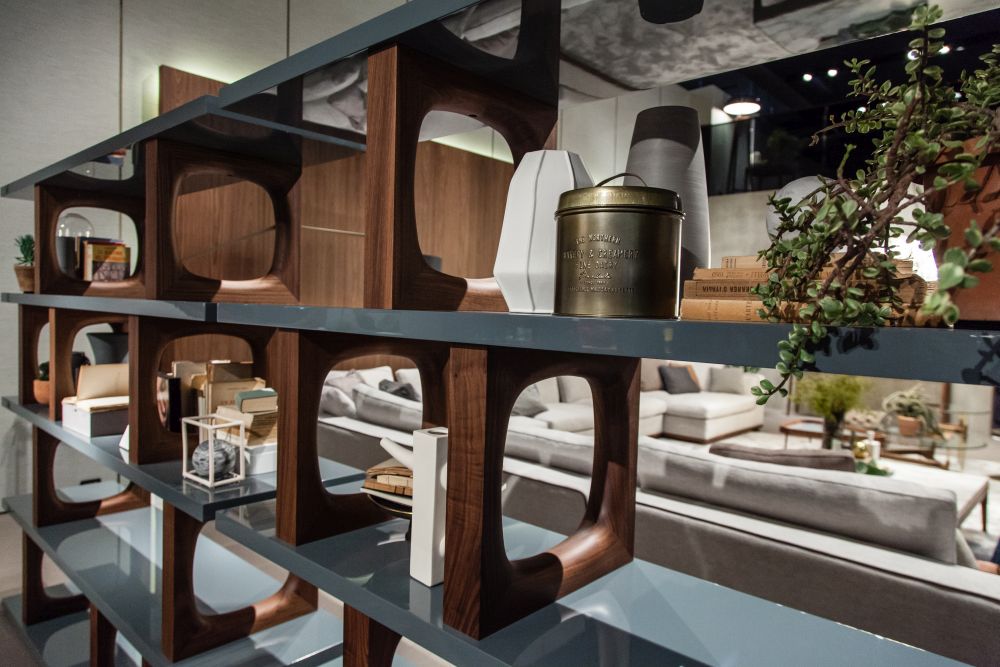 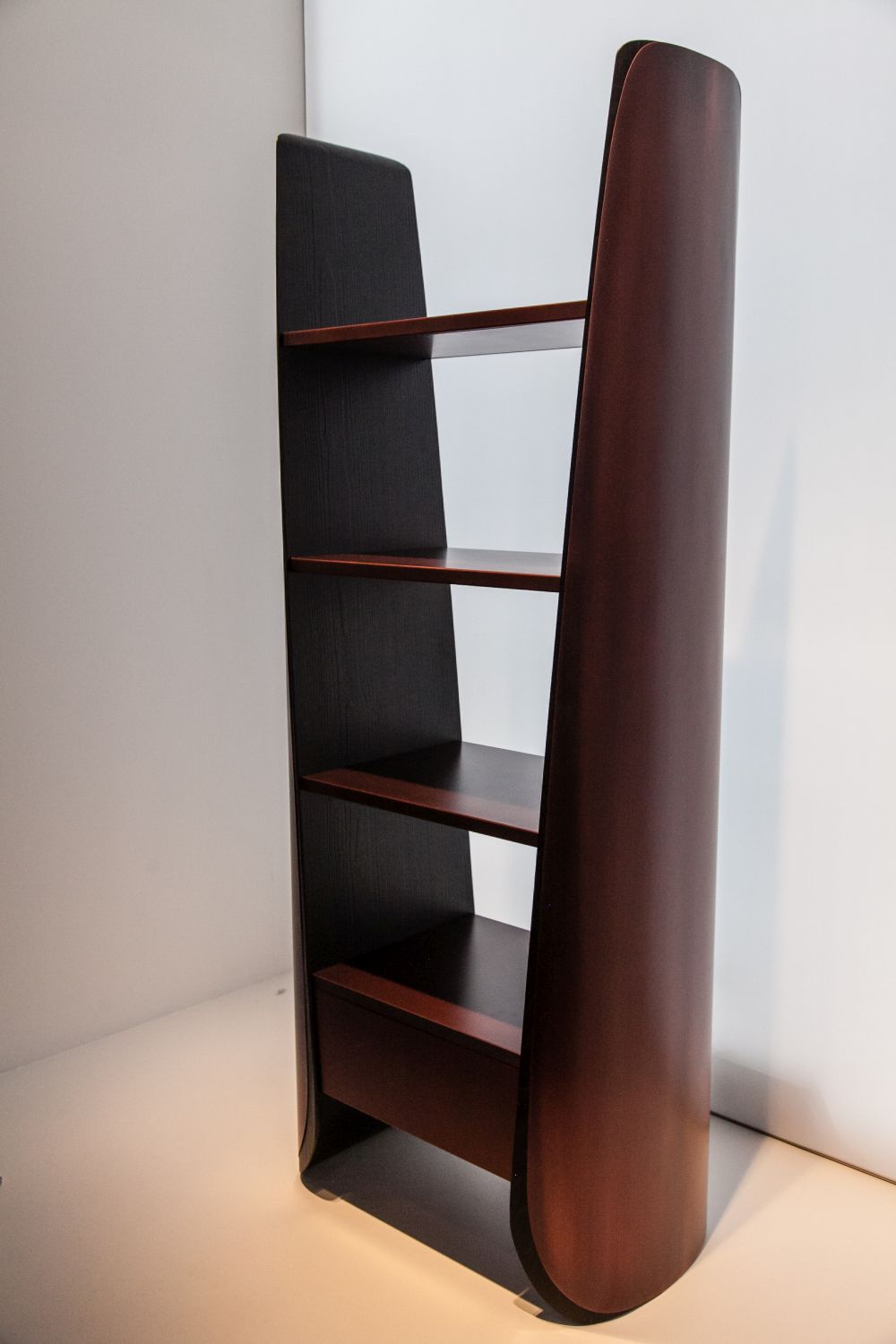 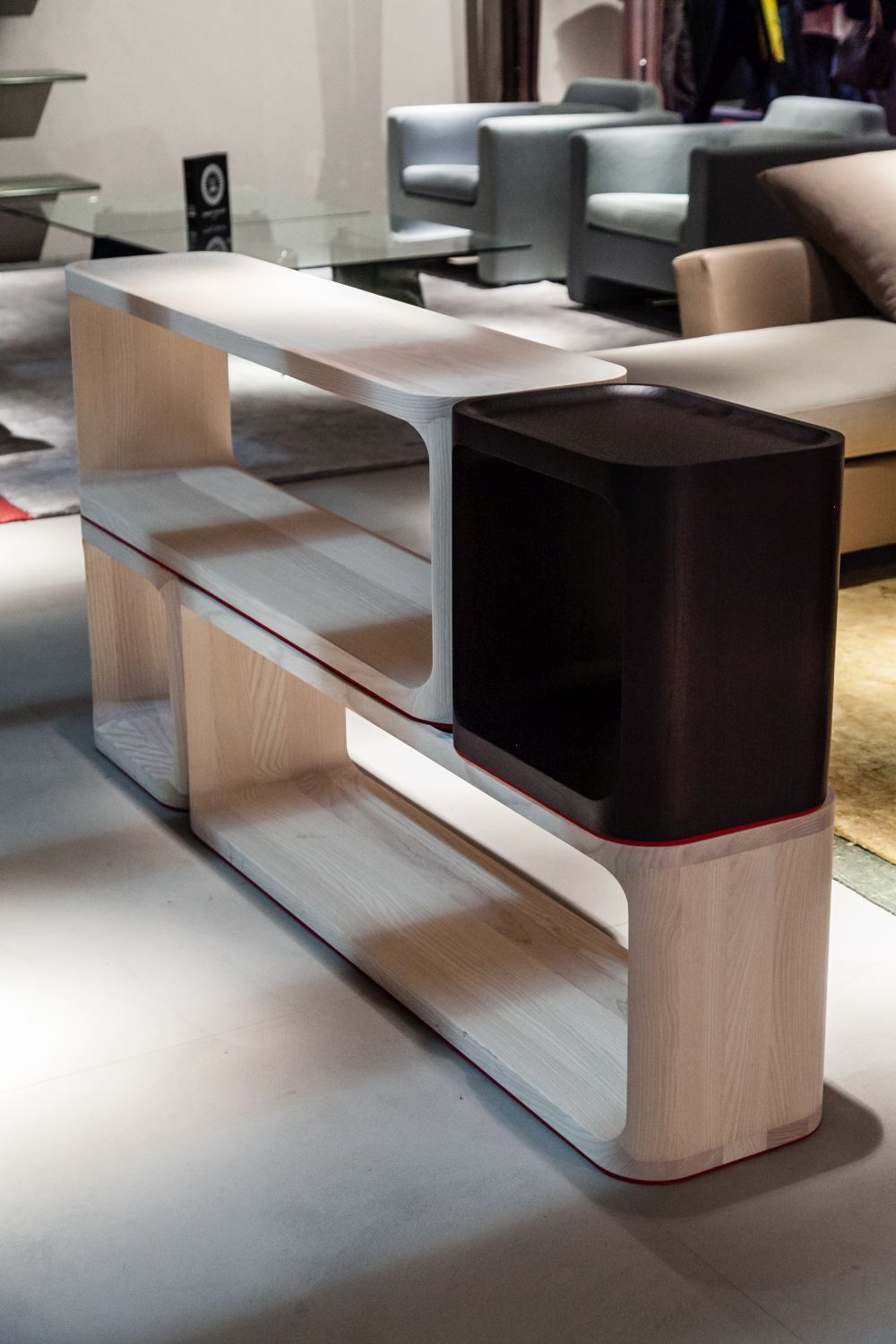 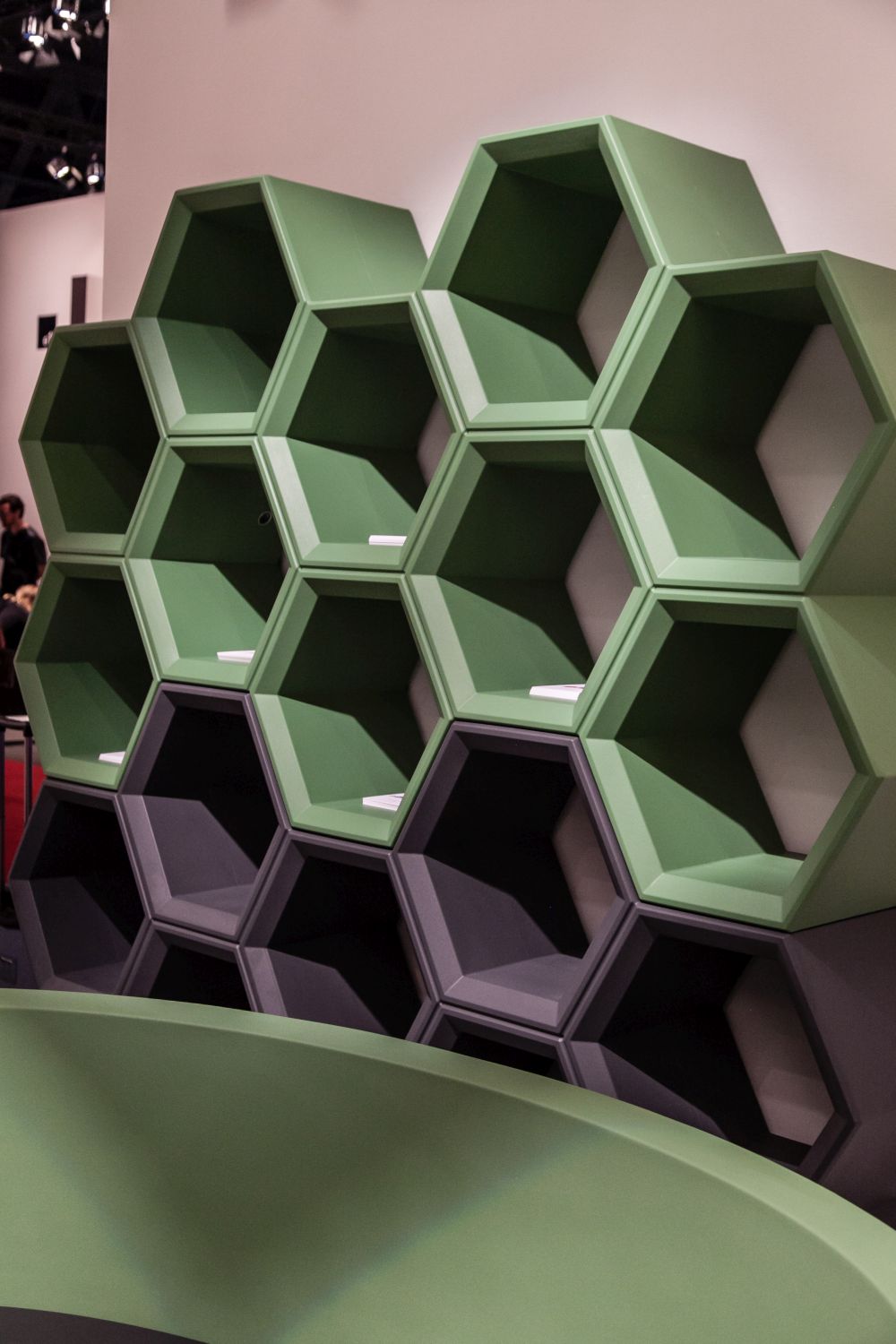 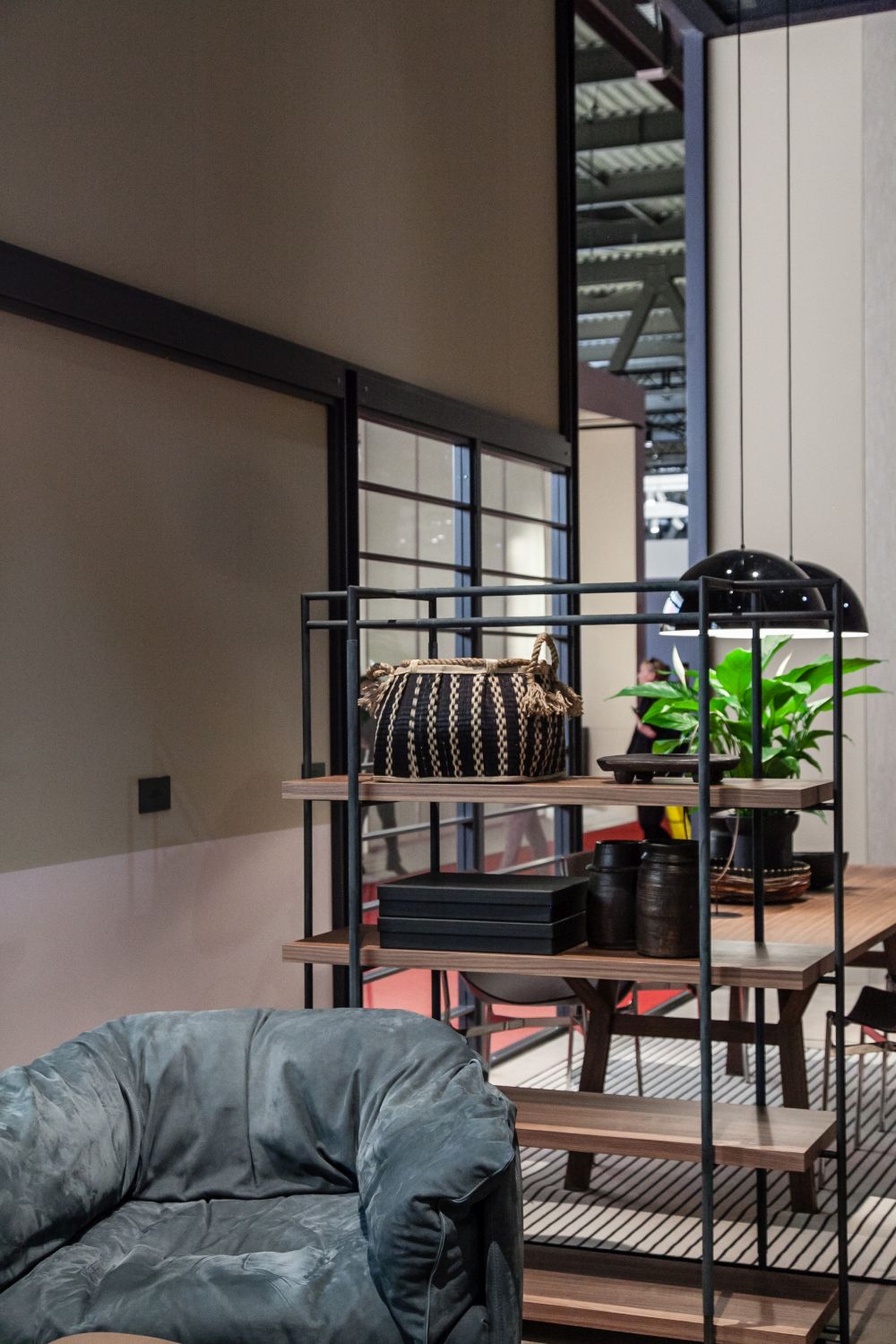 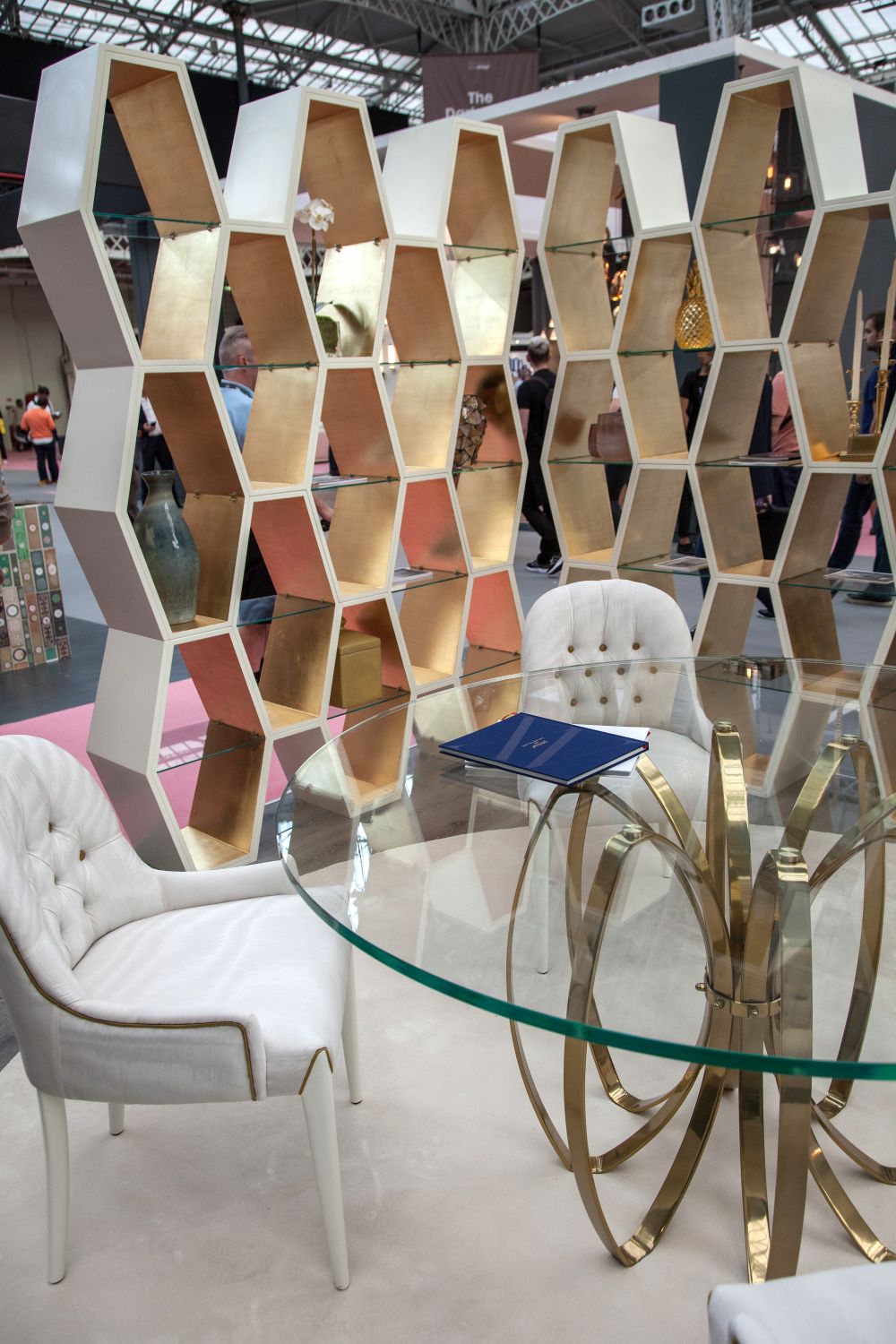 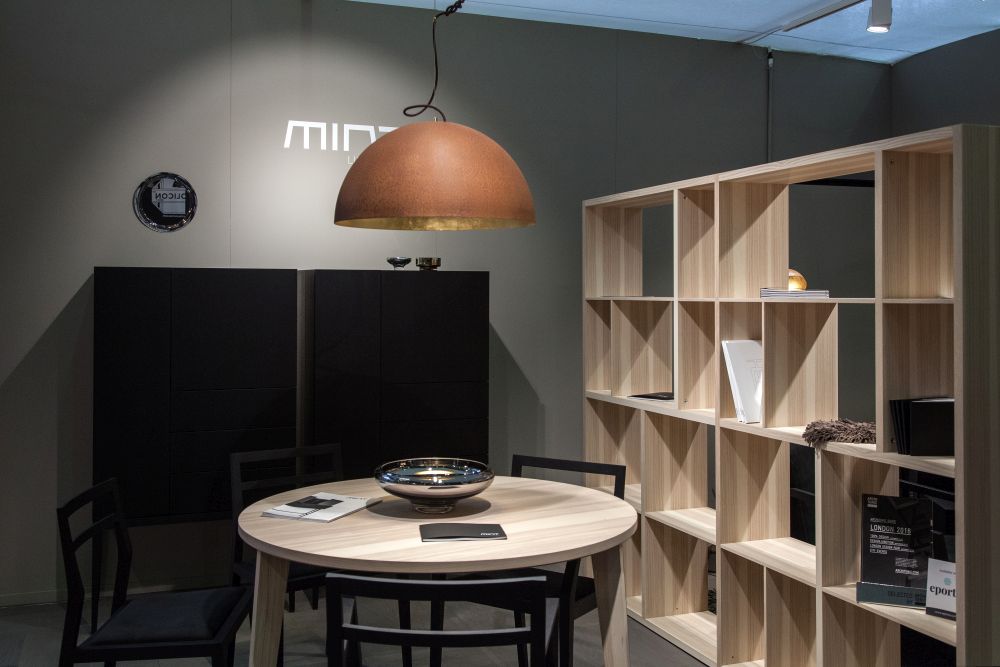 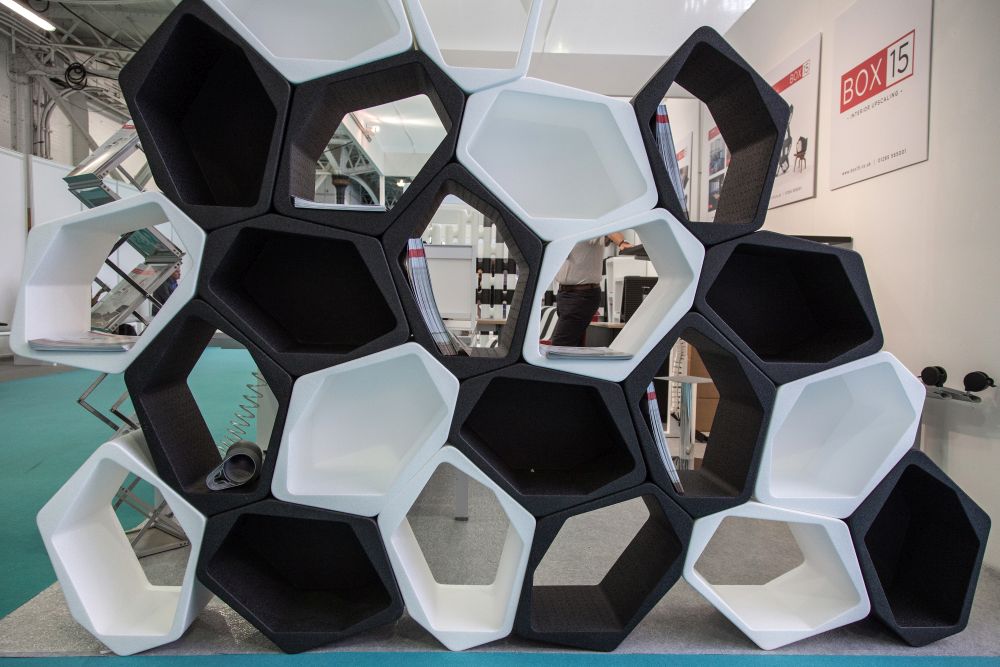 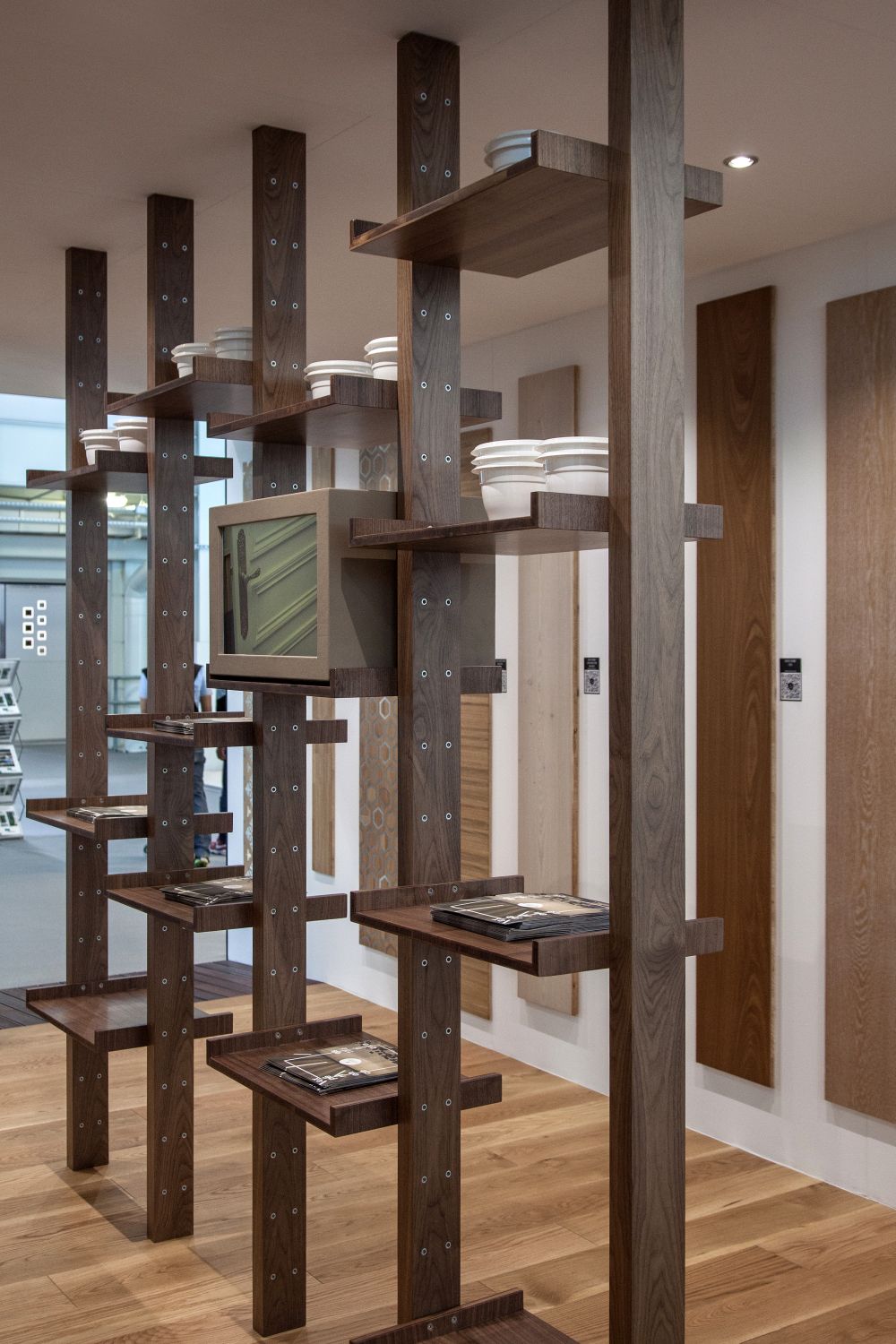 A lot of times we’re using room dividers because we need a way to separate different sections of a zone but we don’t want them to become separate rooms entirely. The reasons for that can be numerous. Sometimes it’s the desire for an open and flexible layout in which case sliding dividers are often preferred, sometimes we don’t want to block the light or fresh air from traveling through the spaces and other times it’s all about saving space and maximizing functionality and that’s when dividers with built-in storage really shine.

One of the most common and versatile option is the divider with open shelves. It’s great because it doesn’t completely block the view from one side to the other, allowing the spaces to still be connected. At the same time, it efficiently delineates them and marks them as separate areas with different functions. The design options are endless, this being one of them. Depending on where and how you integrate the divider into your home, the shelves can hold anything from books to dishes, toys or artwork.{found on jjteixeira}.

Some room partitions are modular. By that we mean they’re made of several modules which can be used individually or in groups and which can be rearranged in a variety of different manners. Build is one such example. The modules are sold individually and can be combined into free-standing or wall-mounted structures. A room divider is just one of the many possible applications. You can mix and match different colors to give your design more character and you can always reconfigure it. You can’t really get bored with such a cool divider.

Using a shelving unit or a bookcase as a space divider is actually clever in many different ways. It’s like building a wall between two spaces but shaping it so it lets you store a bunch of things inside it. In addition, such partitions can be easily removed or relocated if need be, allowing you to reconfigure the space however you see fit. You can’t really top this kind of flexibility. {found on mintshop}.

Meet Houdi, a bookcase with a honeycomb-inspired design and a modular structure which allows it to double as a room divider with built-in storage. Use it to separate the lounge area from the dining space or the kitchen if you have an open floor plan or use the modules to frame a cozy reading nook. The shelves are made of glass which give the unit a lightweight appearance.

A bookcase doesn’t necessarily have to be designed with the goal of also serving as a room divider in order to be used as one. It’s enough to have an open shelving structure for it to fulfill that role with ease. Bak is a nice example. It has a lacquered steel frame and leather and walnut shelves which give it an elegant and pure look. It’s defined by an understated sophistication which enhances its design in a cool way.

We think modular units are very cool and also pretty fun to work with so we’ll show you a few more. This is a structure made of Hexa modules. They form a wall unit but their versatile nature also allows them to be combined into a practical divider. The hexagonal shape of the modules is both practical and eye-pleasing. It looks neat and it’s also regular which means it can be integrated into complex structures in a lot of ways.

In addition to the possibility of using the Plato modules both individually and in groups and the option of combining several to make form a room divider or a wall unit, these cool and versatile pieces can also serve as side tables, benches or stools. You could use them as seats and tables when you’re having guests over and then stack them into a room divider to save space. They’re truly multifunctional and they express it in a very minimalist way. You can get the modules in solid ash wood or Carrara marble, with a bottom pad in red wool felt.

This looks a lot like a ladder but with a more fancy silhouette and a lot more character. Its name is Volte and it\s a versatile and multifunctional unit which can double as a divider in certain spatial configurations. Its design is simple yet it has a very strong and imposing allure. You can use the open shelves to store and display books, planters and lots of other things and the bottom drawer to keep some items out of sight.

With its asymmetrical design and its simple and sleek lines, the Dalida bookcase is an excellent unit for just about any type of space, from bedrooms to living rooms and offices. The combination of lacquered shelves and walnut partitions is an elegant one which puts an emphasis on the versatility of the design.

The design of the Label bookcase is also very simple. It’s also graphical in nature and capable of finding the harmony point between looks and function. The open shelves can hold books, vases, planters and collections, putting them on display and allowing them to be viewed from and used from both sides when the unit is used as a room divider.

The simple fact that a bookcase can be successfully used as a room divider is enough to make it practical and attractive. Add to that a stylish design and possibly some distinctive details and you get an even greater piece of furniture. Nea is a cool example in that sense. It’s strong and durable but also lightweight and graceful as we love this combination.

At the end of the day, it doesn’t really matter what solution you find for organizing your space as long as you get the desired look and ambiance. Whether you choose to give a simple Ikea room divider a chance to stand out, you opt for something custom made from FebalCasa or you pick one of the stylish pieces we just showed you, all it matters is how that particular piece fits into your unique decor.