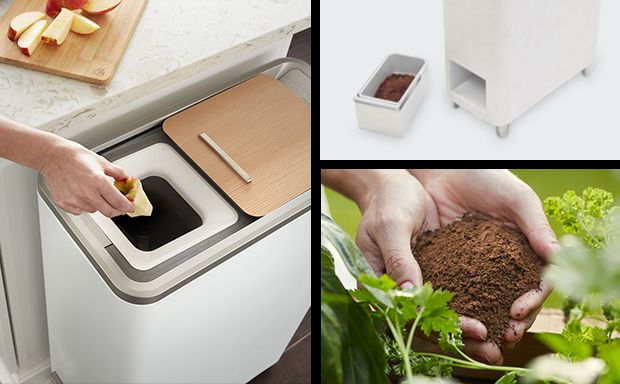 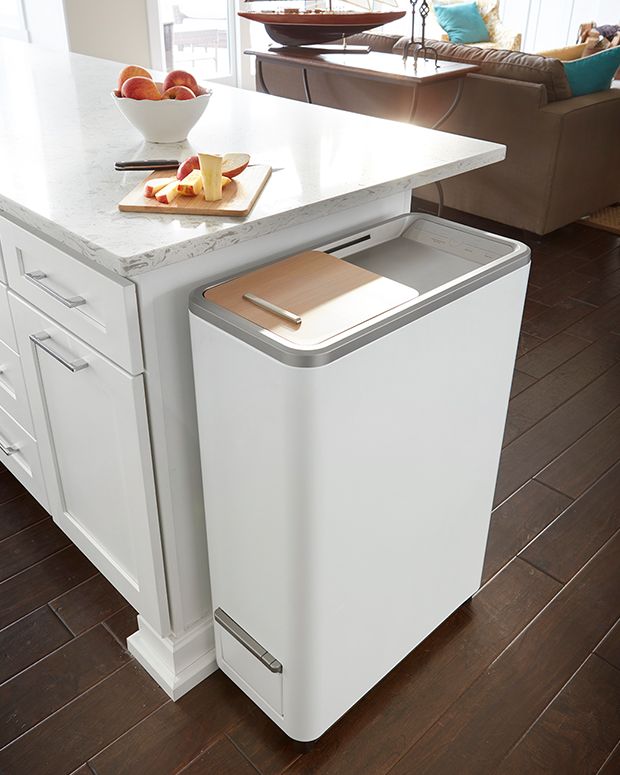 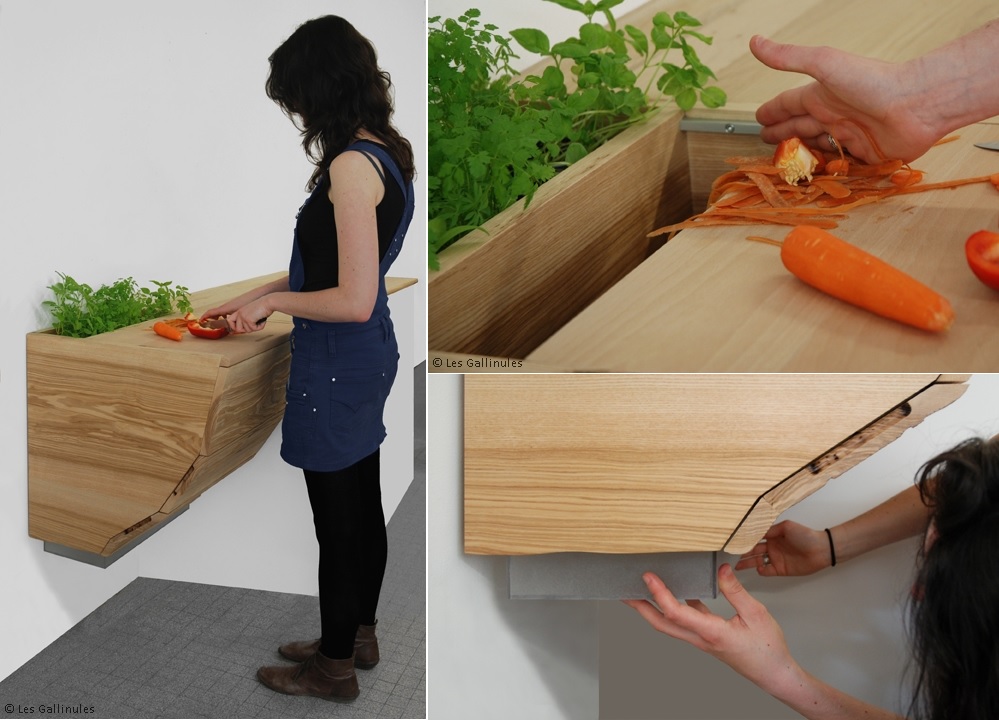 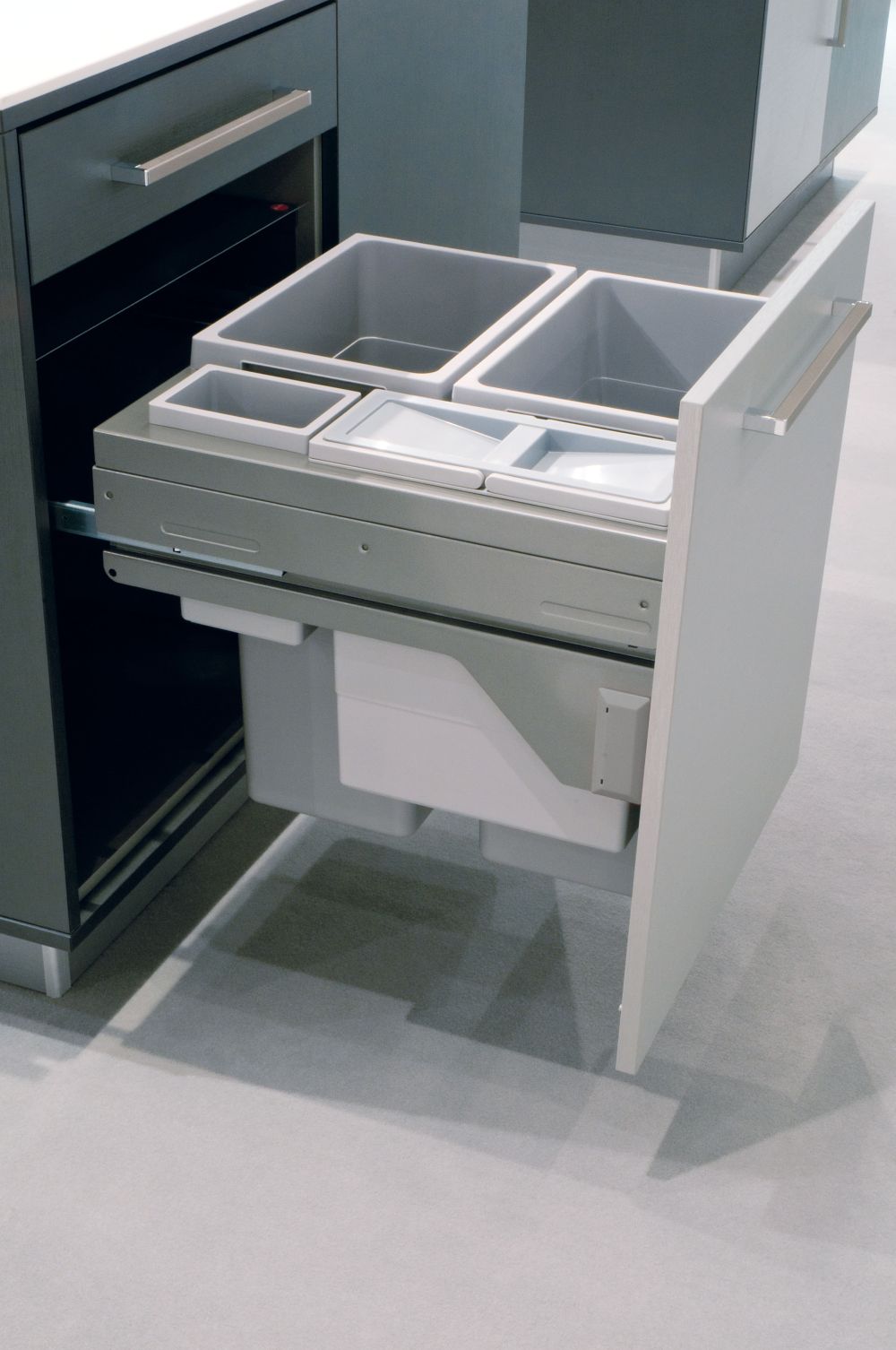 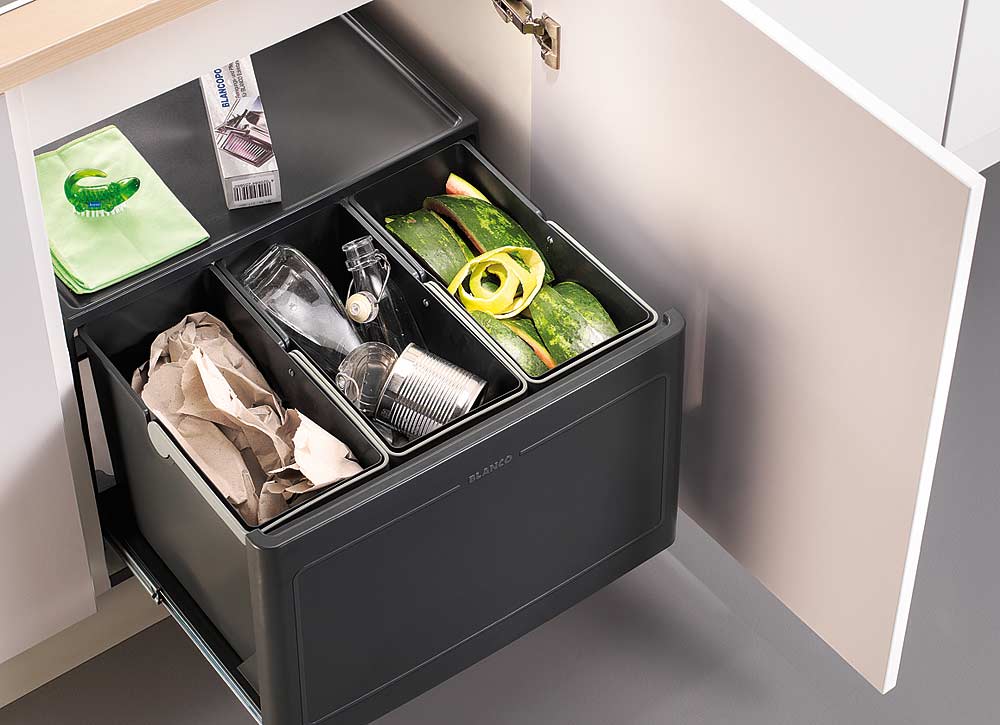 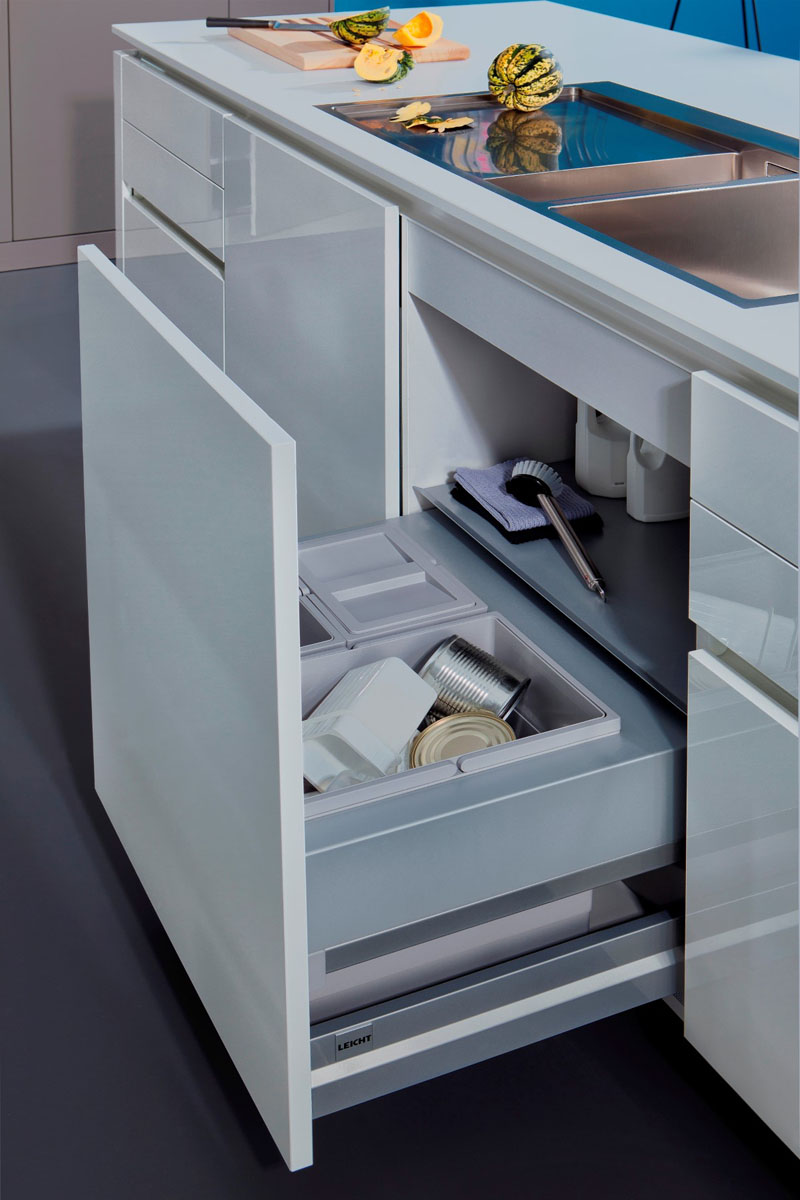 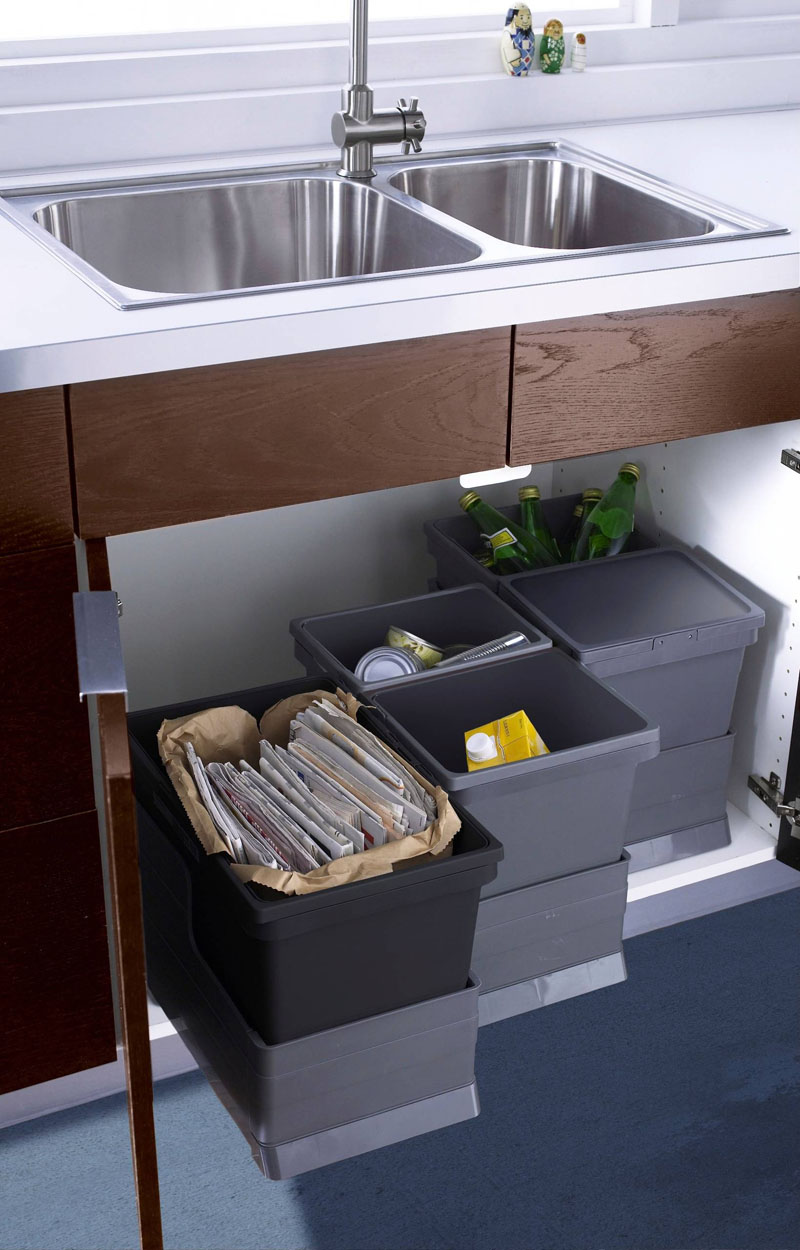 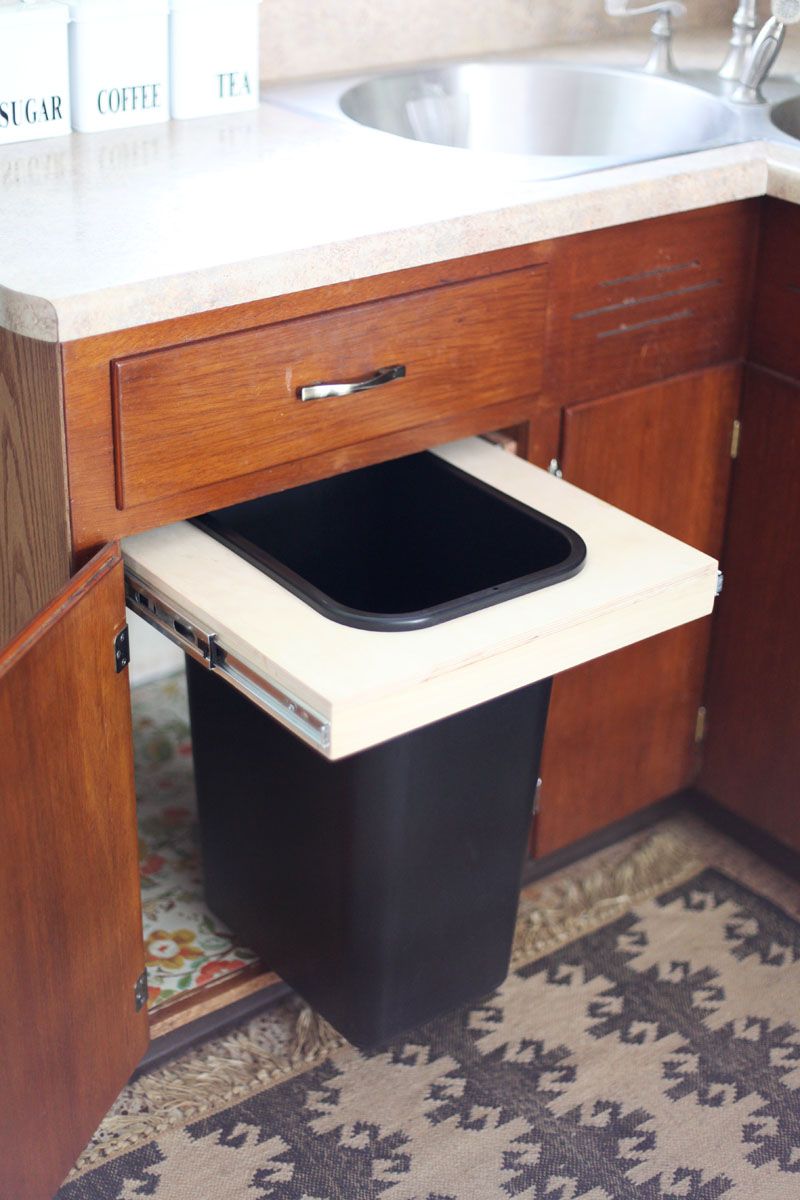 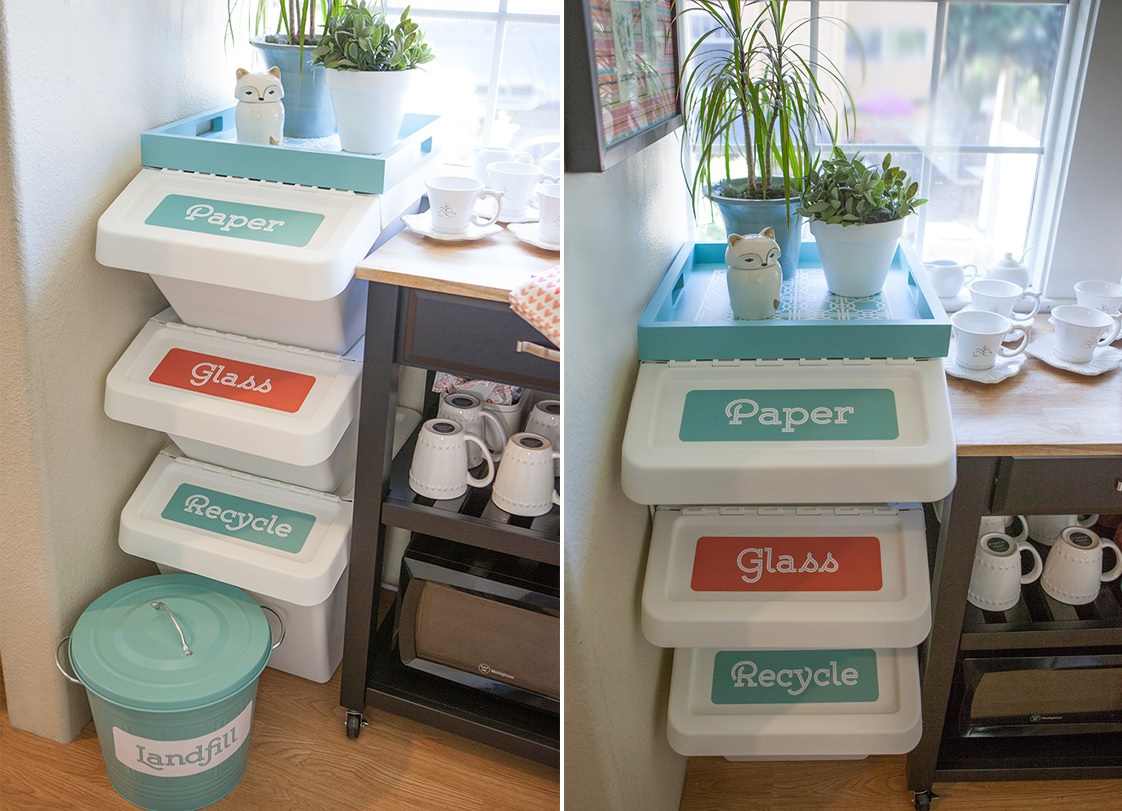 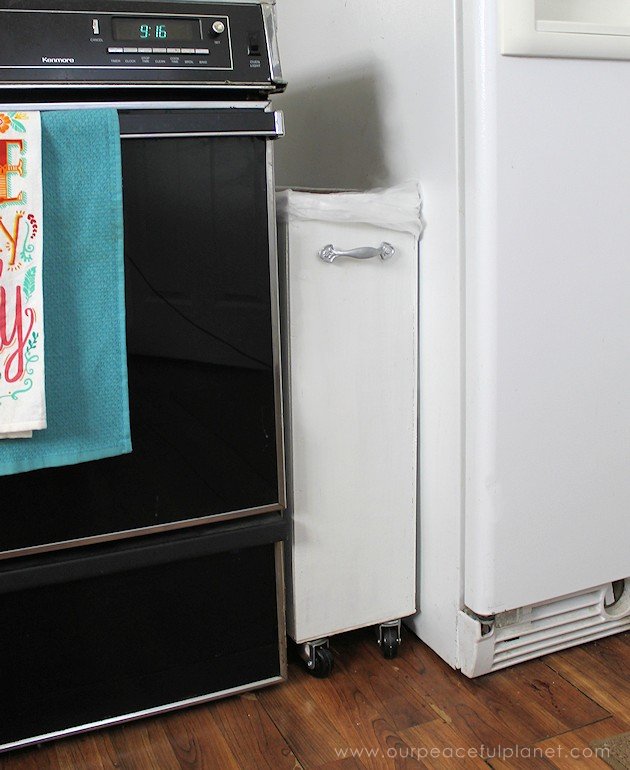 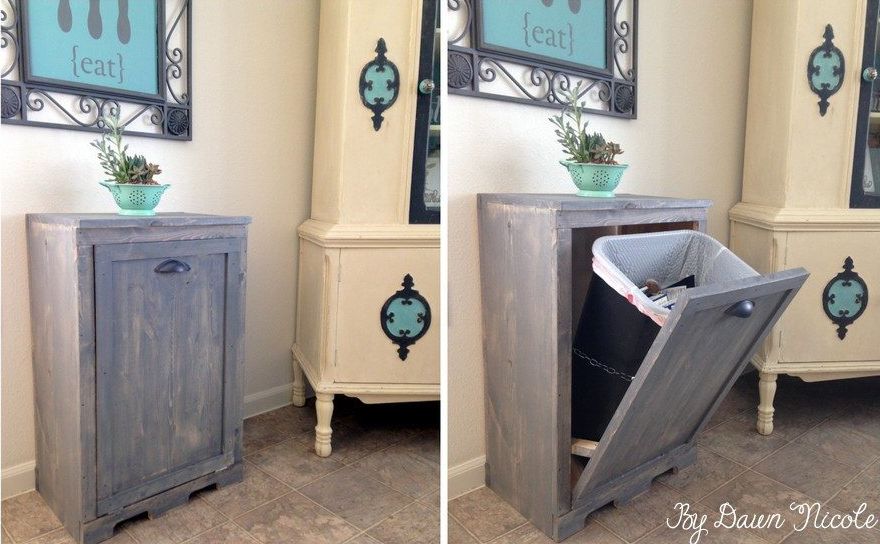 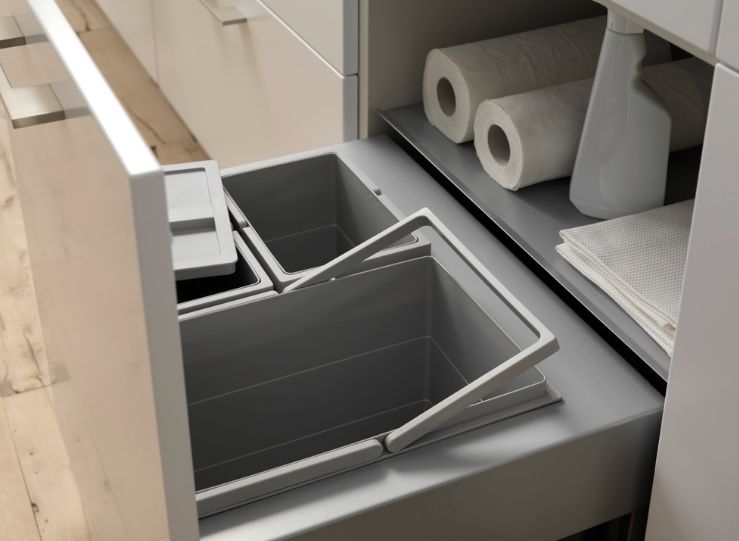 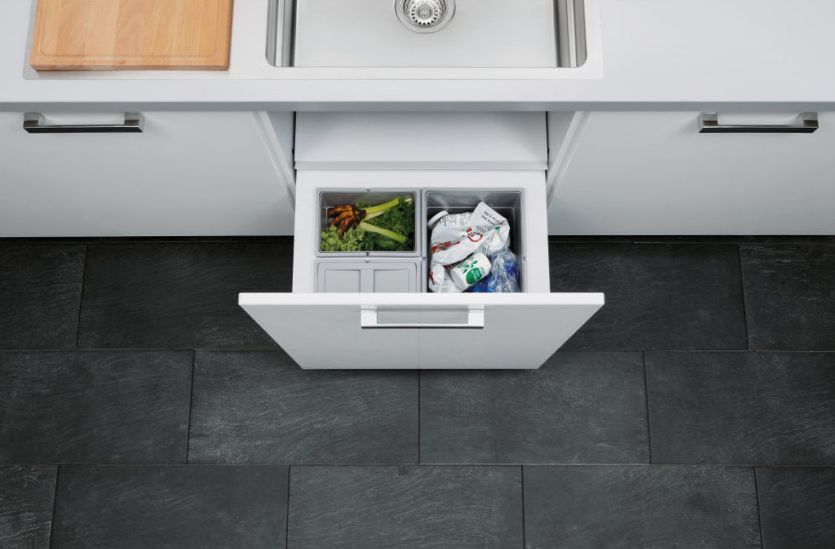 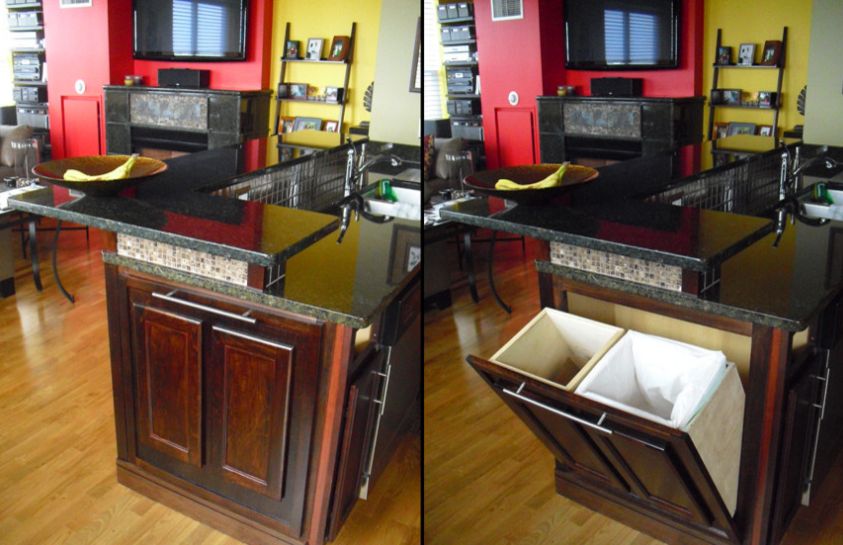 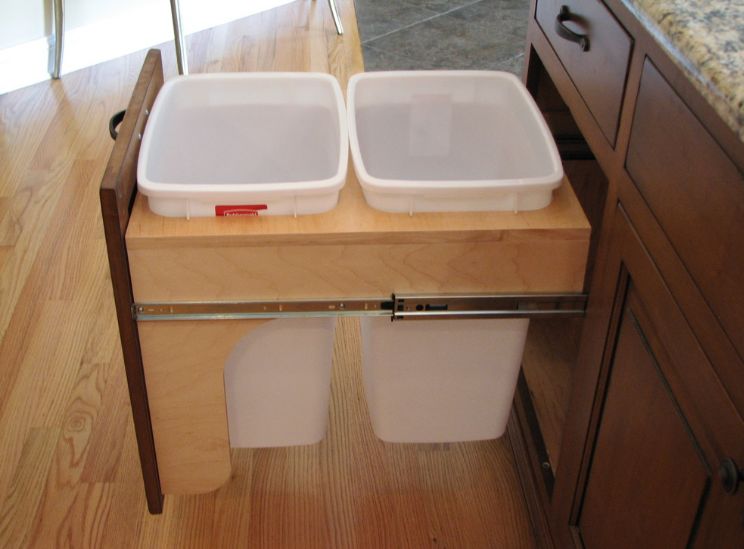 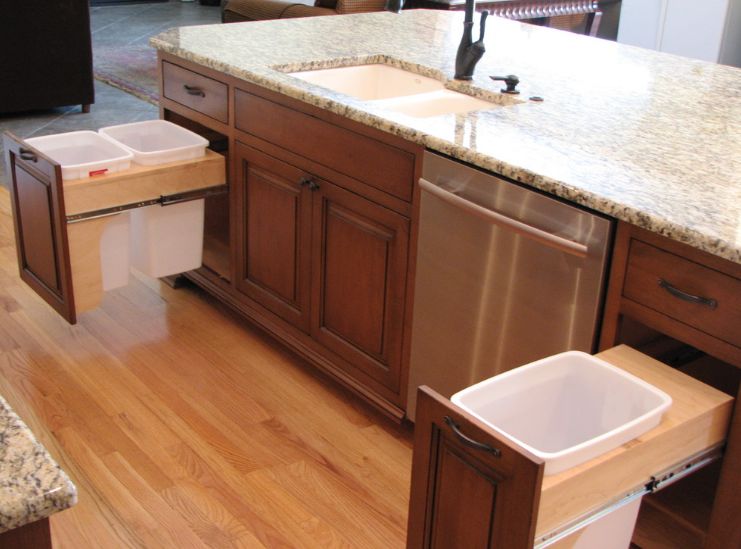 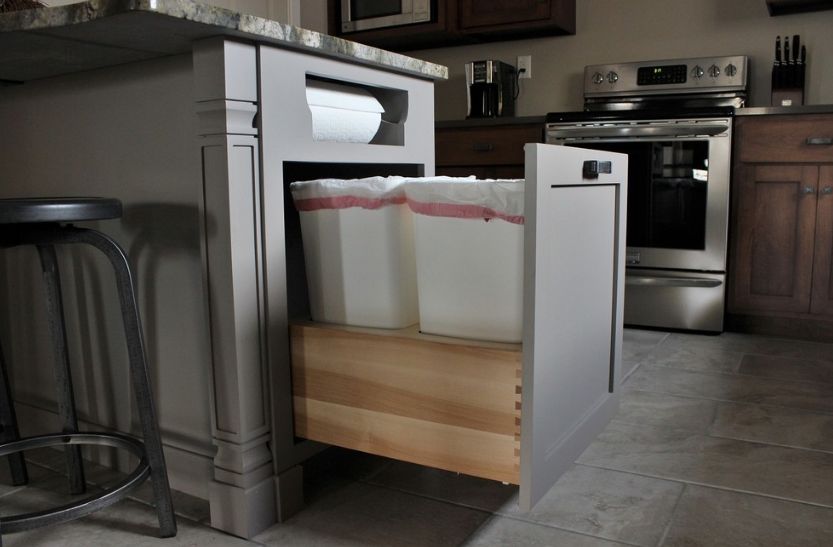 The humble trash can doesn’t get nearly as much attention as it deserves. We often dismiss it and we take it for granted without taking the time to realize that there’s more than one way to think about this. Where I come from everyone keeps their kitchen trash can under the sink, inside the cabinet. While that can be convenient in some ways, it’s definitely worth exploring more ideas before making a decision. We encourage creativity so we tried to find for you a bunch of different designs and concepts that will hopefully inspire some good decisions.

If you’re using your kitchen island to do most of the prep work while cooking, it could be useful to have a trash can integrated somewhere in there. A pull-out drawer can come out of the side and it can reveal one or two bins. The placement makes it easy to use the counter while keeping the drawer open.

It can even be practical to have more than one pull-out drawer with trash bins inside. You could position them strategically: one near the sink and one near the oven or your usual prep space. This way you don’t have to run around and make a mess.

If you’re not really a fan of pull-put drawers either because of the lack of space in your kitchen or for any other reason, a tilt-out trash bin can also be an option. As before, you can integrate it into the side of your kitchen island.

If you’re thinking of making a change regarding your kitchen trash bins, you might as well take this opportunity to also become a bit more eco-friendly. Recycling is easy if you just put a little bit of effort into it. Consider separate bins for plastic, paper, metal and the usual kitchen trash.

If you decide to go with a pull-out drawer you’ll most likely have enough room in there for at least two trash bins. If you like the idea you can even have the drawer designed to be a bit wider to have even more room inside.

Trash bins that fit in a cabinet

Trash bins are usually kept in the kitchen because that where they’re the most useful. But what if you’d choose to also put a bin in the dining room for instance? That could be practical except for the fact that it would look out of place and not exactly eye-pleasing. That, however, can be solved by hiding the bin inside a small cabinet like the one showed on bydawnnicole.

Can’t pick a permanent spot for your kitchen trash can? That’s okay…you could opt instead to have a mobile trash bin. It can have wheels/ casters and you can move it from place to place as you’re cooking, cleaning or doing other activities. You can even make something like this yourself. It’s all described on ourpeacefulplanet.

If recycling is a part of your daily routine, it would help to have an organized system. For example, you could have separate bins with labels on them and you can keep them all organized in one of your kitchen corners. Actually, the placement is up to you. As for the labels, check out liagriffith for some cool ideas.

A lot of people keep their trash can inside the cabinet, under the kitchen sink. This placement is so common because it’s practical. However, it’s not that practical to have to bend down every time you want to throw something in the trash. It’s much easier to slide out the bin and this pull-out mechanism featured on abeautifulmess shows you how that works.

Integrating the trash bin into the kitchen island can often be even better than keeping it under the sink. The island doesn’t even have to be big. In fact, it can be a repurposed cabinet like the one showed on sawdust2stitches. It’s small enough to not make the kitchen look cluttered and big enough to hold two bins and some shelves.

Instead of being constraint to only choose from a few areas where you can keep your kitchen trash bin, how about you just pick the spot that’s most convenient and practical without worrying about how it looks. You can just disguise the bin with a cover and make it look like a cabinet or a cute storage box. {found on imperfectlypolished}.

Tilt-out trash cabinets are practical and easy to use and, more importantly, the concept is not complicated enough so you can’t put this  thing together by yourself. Check out justagirlandherblog to see the list of supplies you’ll need as well as some tips and instructions.

There’s not much you can use the space under the kitchen sink for, except some sort of storage and since you need a place for the trash bins, the choice is often already made. Still, that doesn’t mean you can’t customize your under-sink trash bins. The Variera bins from IKEA use a sliding mechanism and can be integrated into pull-out drawers.

A lot of the modern trash bins are designed to be integrated into cabinets or drawers and their designs are clean and simple. These ones from Leicht for example fit perfectly into this pull-out drawer and they’re small but together they add up to a large bin.

Another cool example is the Blanco Bottom series which consists of four waste system models which can be operated manually or automatically They’re integrated into the cabinet and they come in various different sizes. Mix and match them however you like, based on your kitchen cabinetry.

Easy to install and practical, this trash bin system is perfect for keeping things organized, even when you’re throwing them away. The Hailo Euro Cargo bins can be mounted to the inside of a cabinet and come with their own runners.

Here’s another example of a modern kitchen trash bin system. This one is integrated into the countertop so you can easily just slide the trash in as you’re prepping food. There’s a lid that covers the bin and which you can just set aside to reveal the built-in container. The design of the Bench Top Bin is clever and convenient.

This looks like a nice workspace for the kitchen, right? It even has a built-in herb planter. It’s actually more practical than it lets you see. The top slides to reveal a built-in waste bin. So after you’re done cutting and peeling, just swipe the leftovers directly into the bin with one single motion. {found on lesgallinules}.

Waste bins integrated right into the worktop are definitely practical and worth the investment, especially if you’re the type that cooks daily. The Blanco Solo bins are the high-end version of that.

If you’re really set of recycling and eco-friendliness, then maybe you’d be interested in a system that can transform organic waste from the kitchen into fertilizer in just 24 hours. It’s called the Zero Food Recycler. Check it out and see if it fits you.