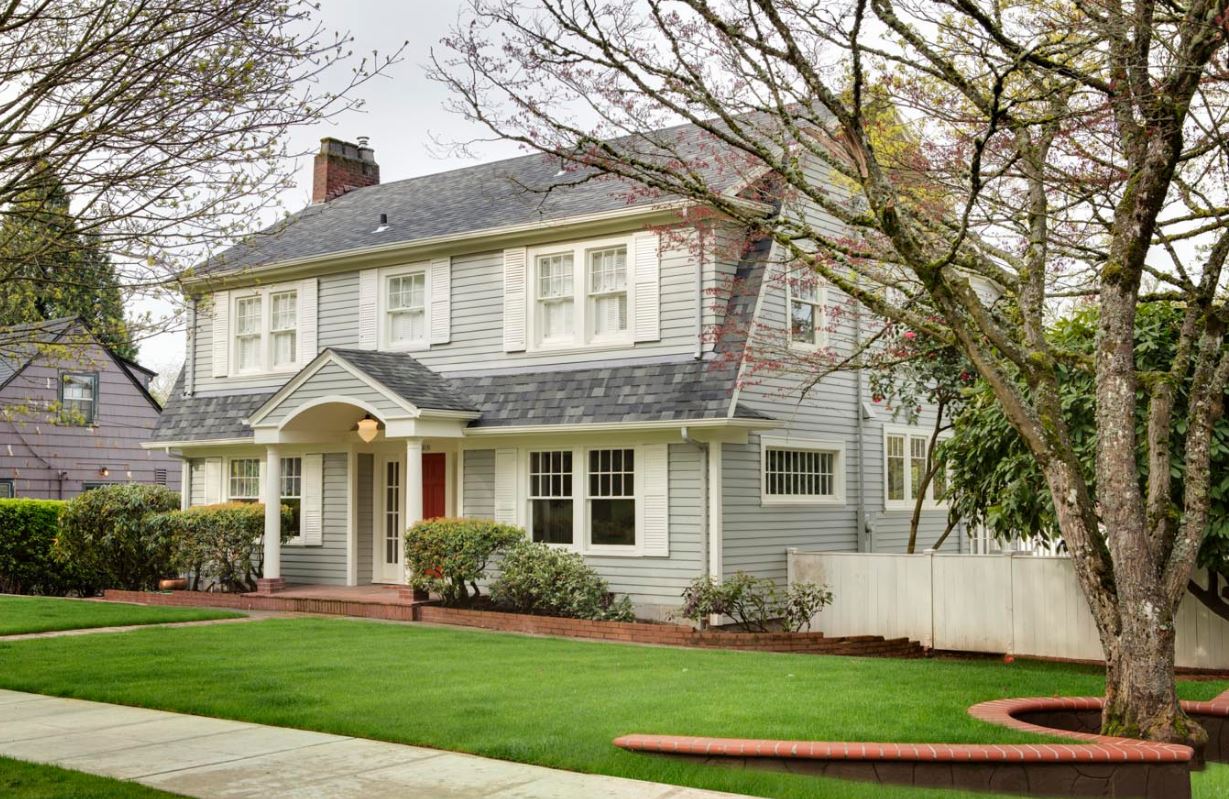 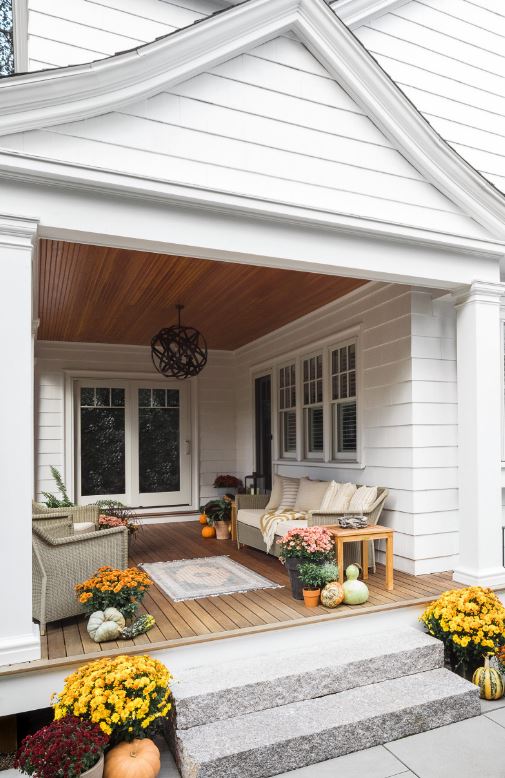 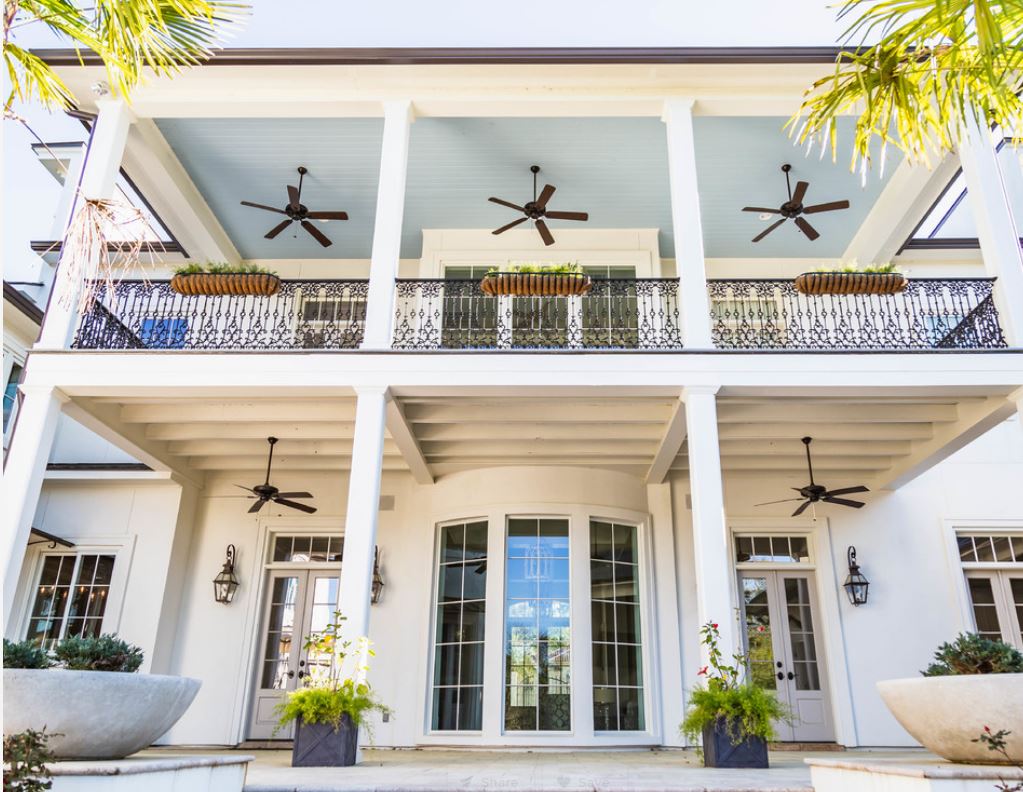 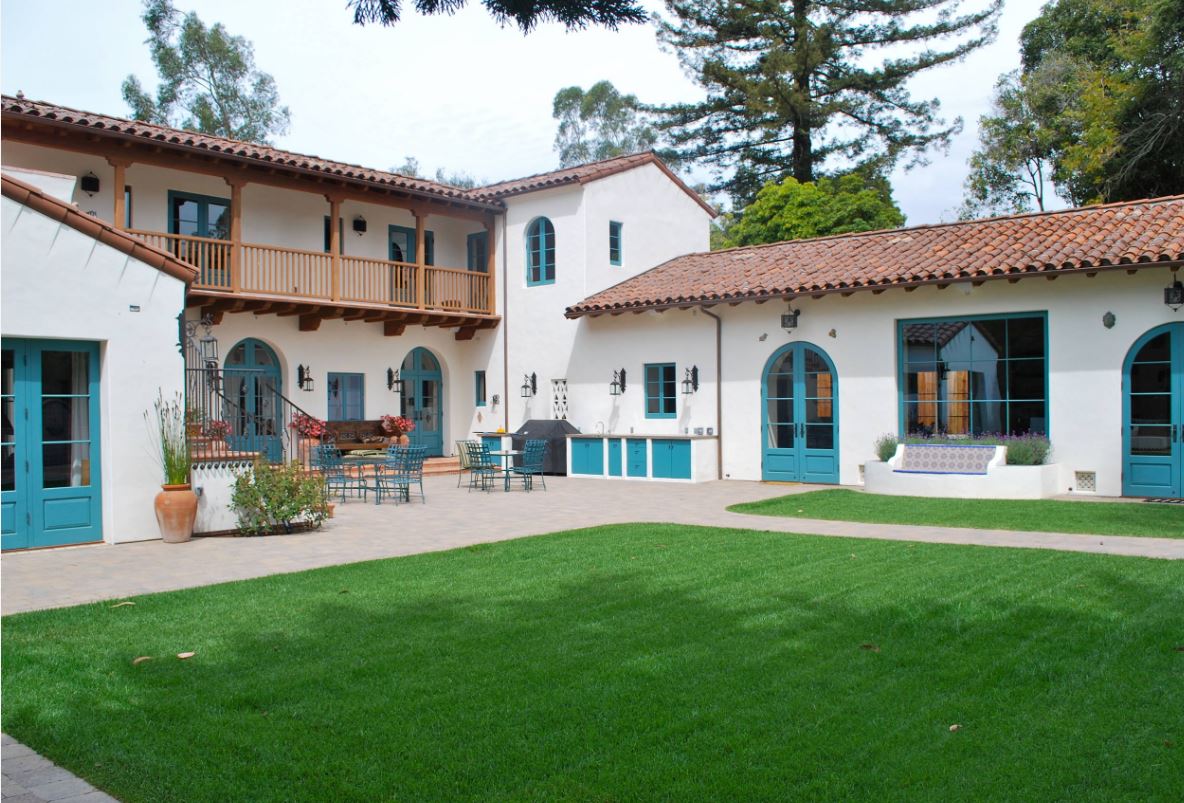 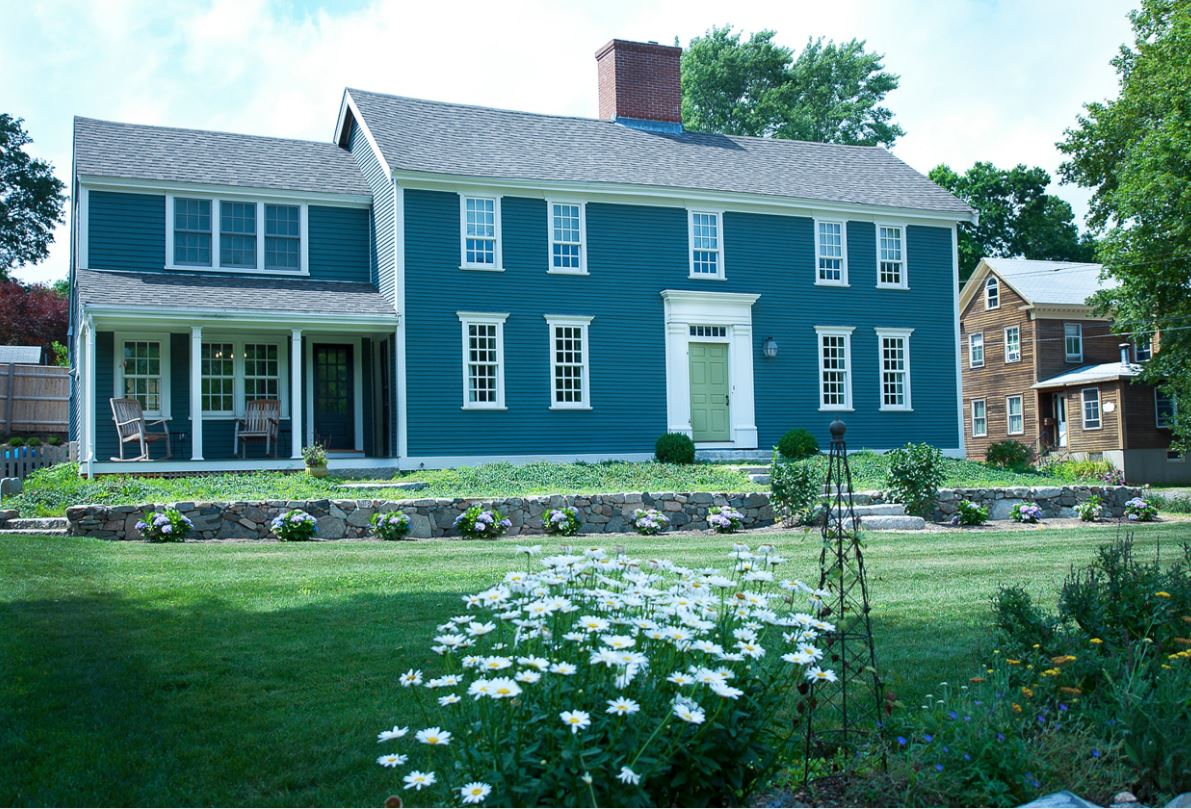 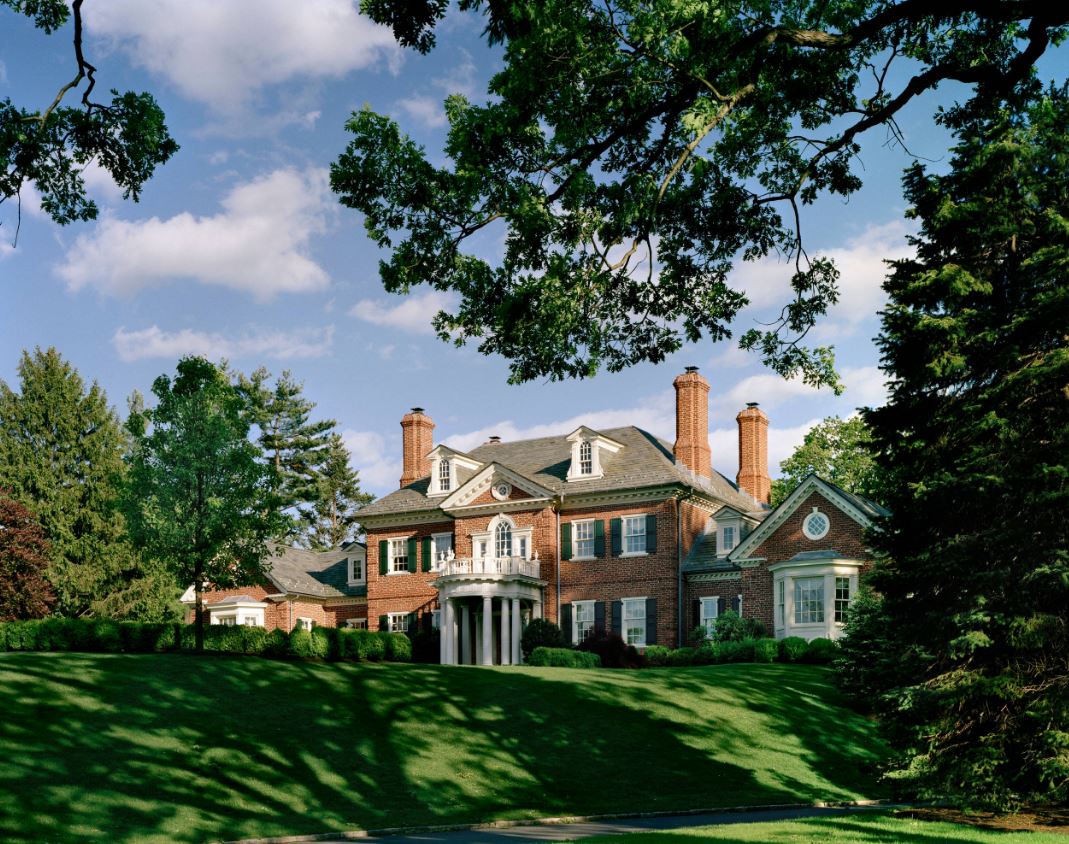 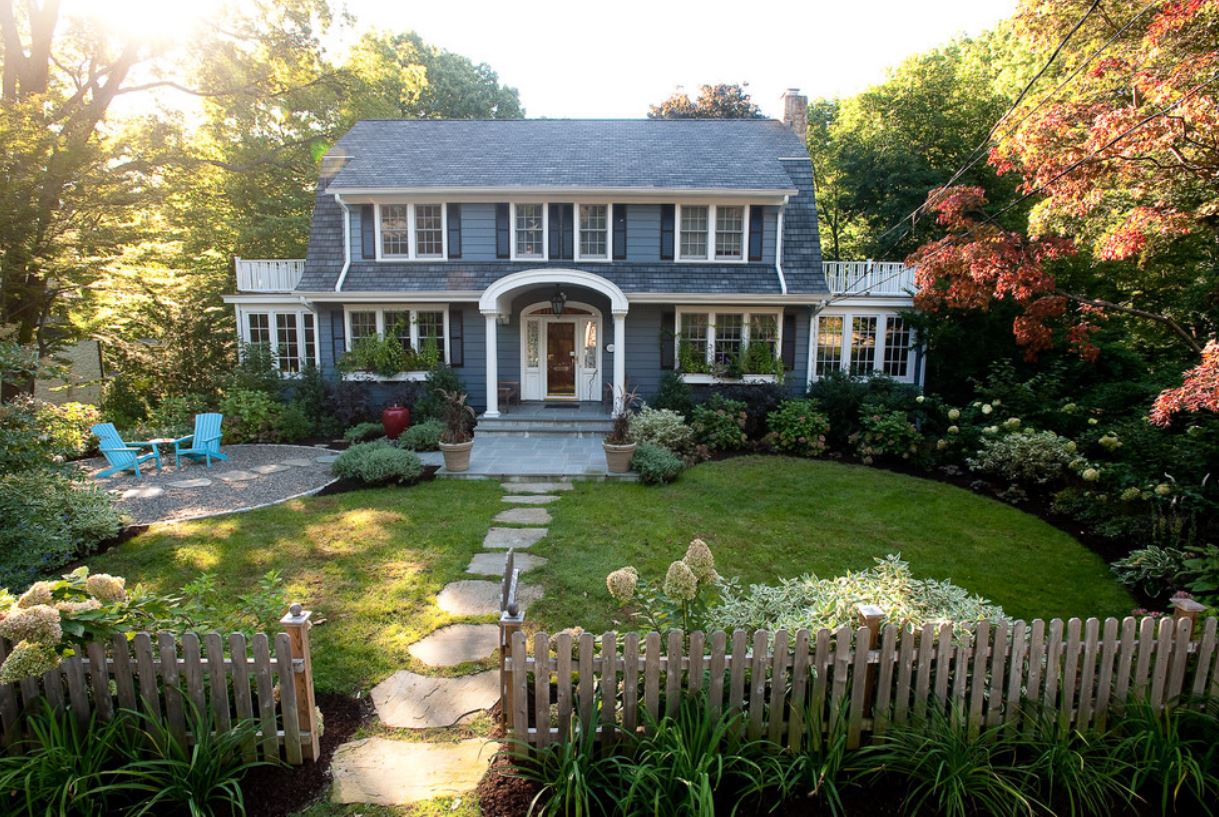 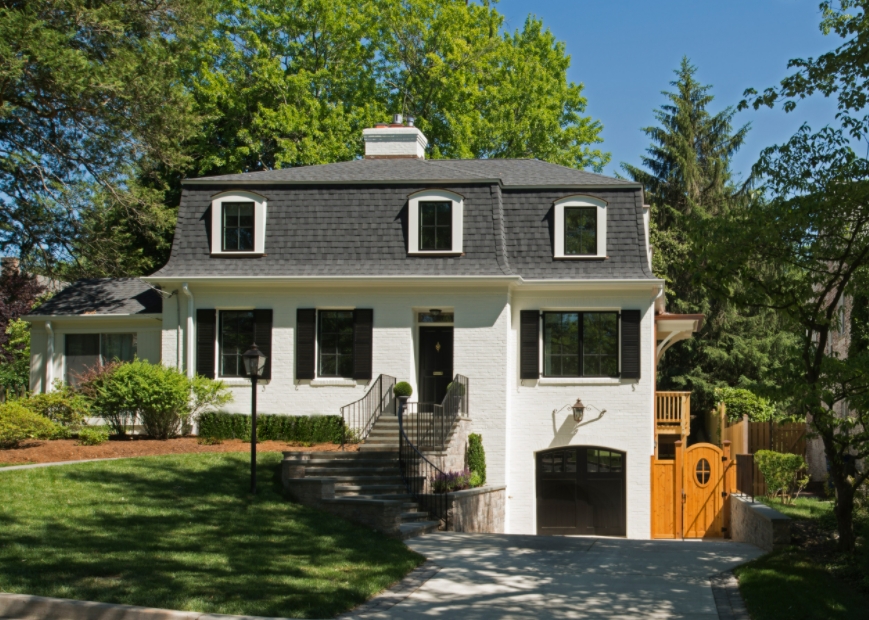 Dutch Colonial house architecture refers to several building design styles associated with the colonial period of the US. The general era refers to houses built between 1600 and 1900. Most colonial architecture that stands today was built in the 1700s.

The Colonial Era refers to a time period. We may imagine a specific time, but the period is broader than one might think. The Dutch colonial revival period saw the homes become popular again since Dutch settler first arrived in the New World.

What Is A Dutch Colonial House?

Dutch colonial houses are one of the most popular styles that exist from the country’s early days. The thing that makes them distinguishable are the gambrel roofs with curved eaves that extend along the length of a house.

Typically, the Dutch colonial house style were made of stone and other natural materials. They had at least one fireplace. Sash windows and swinging wood shutters were popular and remained a feature during the Dutch colonial revival period.

The gambrel roof seems like something you’d see on an old cottage. When you imagine Dutch colonial style architecture, you think of a big porch and a roof with two slopes.

The Dutch colonial house isn’t the only home style you’ll find. While these homes are American colonial, they are different and unique.

Each home has different influences but the colonial homes were built during the same period.

Most French colonial houses have heavy timber frames (or stucco) placed vertically on a sill or into the ground. The logs adhere with a lime mortar or clay mixed with pebbles or special mixture.

This mixture contains mud, moss, and animal hair. When renovating, much of this old infill was replaced, and some of the walls replaced with brick. Distinct traits of a French colonial home include other things as well.

These things include a raised basement to support the floor that included the living quarters. Most colonial homes with exterior stairs were French colonial homes. The stairs led to a large veranda up top.

Many French colonial homes also had dormers and classic French doors. The door will help you tell most colonial homes from one another. If you find a colonial home with original doors, consider yourself lucky.

Traditionally, many of them were stucco as they were often built in the southern parts of the US and Mexico. Most of the windows were open holes or metal, and glass was rare. The point was to not allow as much sun into heat the house.

Wood shutters were common in Spanish colonial homes. While arches and designs might be put into the clay, ornamentation was rare. The homes of the rich may have intricate tile, but other than that, the base was plain.

Intricacy was reserved for chapels and government buildings. Just like in Mexican architecture, Spanish colonial homes had wood support beams that poked out from the walls on the exterior.

Lastly, a courtyard was highly sought after by Spanish-Americans during this time, so any home that could have one did. To this day, most Spanish homes in the Americas feature courtyards, especially in rural areas.

Most English colonial homes during the first period were in the northern states, so the homes were often built facing south. When a building is facing south, more sunlight can enter to heat the house.

These houses were also built with central chimneys to maintain enough space for fireplaces and for air to be led to the stove to burn clean. The English colonials were all about staying warm after losing so much to the frigid temperatures.

Another thing you’ll see is an asymmetrical rooftop. Again, it is designed to maximize the heat from the south and minimize the coldness from the north. Inside the houses, clay and twigs were used as insulation.

The staircases wrap around central chimneys. Thick beams run throughout to support the upper levels and were all about safety and fresh air.

Symmetry is one of the most important things in Georgian homes. The door is in the middle and each side has the same amount of windows. These windows are usually plentiful and elaborate.

Georgian homes often had multiple fireplaces for warmth and to maintain symmetry. For example, if three fireplaces were needed, four were built so there would be two chimneys on each side of the house.

These houses were a dream for someone with OCD as everything is satisfying and appealing to someone who needs things to be balanced. Clean corners were used at every given chance, making most homes square.

Lastly, you may notice Greek and Roman influences, most often seen on the exterior or entryway. This includes pillars and aesthetically pleasing ancient designs. Though not as common in classic Georgian homes, Georgian colonial homes loved this feature.

What Are The Factors Of A Dutch Colonial House?

With Dutch colonial homes, there are a few things that make them different. The early Dutch settlers that first arrived in New Amsterdam were considered the best masons.

Gambrel roofs are the most distinguishable feature of Dutch architecture. This type of roof is what you’d see in a barn with four panels on the roof instead of the classic two-panel roof. When it comes to gambrel roofs, the Dutch were experts. The roofs were popular because of their ability to retain heat during the winter months.

Many homes also had flared eaves. This is simply something that made their architecture unique and cottage-like. It also redirected the water, acting as a gutter and letting the water fall away from the sides of the house.

While most original Dutch homes were made of stone, the frame was usually made of wood. This gave the builders something to work with no matter what material they used to construct the rest of the house.

Ceiling beams are necessary for any wooden house. The difference is that with Dutch houses they were made to be exposed rather than hidden unlike in English houses.

Sash windows are windows with multiple panels, with one of the panels opening. This type of window is very common today but wasn’t common during colonial times.

A dutch door opens in two separate sections, but they may open together like a normal door. However, a dutch door can be opened in halves. They allow fresh air to come into the house while keeping animals out.

While most windows on the original Dutch colonial homes are square, many had one or two arched windows. These were on the gabled end and chimneys of most Dutch roofs.

The edges or curves on most Dutch colonial house style made the houses square, yet there is a touch of roundness to soften the appearance.

While English homes had center chimneys at this time, Dutch homes at multiple end brick chimneys. In warm climates, there was one end chimney. But in colder climates, there were two end chimneys to warm the house. This was one reason why the Dutch were considered the Old World’s best masons.

One And A Half Stories

The Dutch made their houses one-and-a-half stories to avoid the tax that was set for two-story houses in during colonial times.

Now you know why the homes are popular. Many people try to replicate old Dutch colonial houses when building one from scratch. While you can’t copy them entirely, you can build one according to the Dutch colonial revival style.

By looking at modern Dutch colonial houses across the country you’ll see how they have been preserved since they were first built in New Jersey, for example. If you’re lucky, you’ll find some in your area made with local stone to get a feel for their style. You can check your newspaper for recent articles that feature modern examples of Dutch colonial architecture and the classic gambrel roof. The home are typically featured in local media.

What Makes A House A Dutch Colonial?

Dutch Colonial homes have a gambrel roof, which is a broad, double-pitched roofs that slope flat and wide at the top and then switch angles and slope straight down. A Dutch door is also required. The top half of the homes have narrow dormer windows built into their rooflines. Modern versions of the style experienced a revival that enhanced their style from the early Colonial Era. It was after World War I that the Dutch style houses featured a porch and long eaves.

When Were Dutch Colonial Homes Popular?

Where Are Dutch Colonial Houses Popular?

Beginning in the 17th century, Dutch immigrants arrived in New York, New Jersey, Connecticut, Pennsylvania, and Delaware. They brought with them their native architectural styles that incorporated native design elements and would later become associated with American architecture. Dutch colonial style homes soon became in high-demand. During the second half of the 20th century, Dutch colonials were built in various regions.

What Is A Dutch House Called?

Among the Dutch, a townhouse is the standard. The residences are built in a continuous block, so the houses share outer walls. A pair of houses are referred to as “townhouses.” An early dutch house had the same house style that first developed in. the Netherlands.

Jacob van Campen, a Dutch architect, and one of the leaders of a group of architects who created an architectural style that would later re-emerge in 20th century America. Dutch settlers preserved the style in early America buildings. The early Dutch houses were built with similar distinct features like wood clapboard and infused natural materials. The style of the front doors changed some but in New York and New Jersey, the Dutch colonial houses remained true to their original features.

What Style Is Dutch Colonial?

Dutch Colonial is domestic architecture characterized by the distinctive gambrel roof that has a curved eave running along the length of the house. The home will feature a stone chimney, double pitched roof, natural materials, overhanging eaves split horizontally, big front door, and a large front porch.

The Hudson River Valley would be a good place to live if you were set on the home style. You wouldn’t find the homes in Lower Manhattan because there’s not enough room on the island. If you can’t find a Dutch Colonial home, you could build one from scratch. After early settlers arrived in New Amsterdam the style spread across the country.