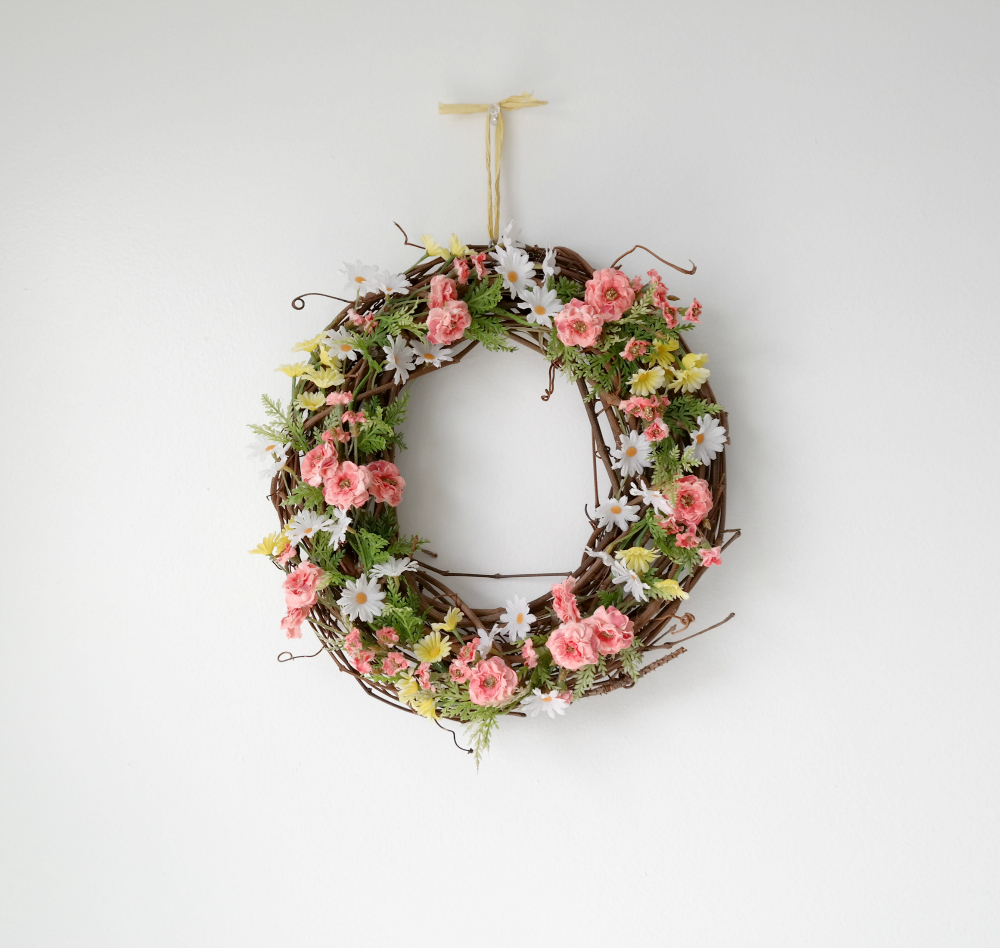 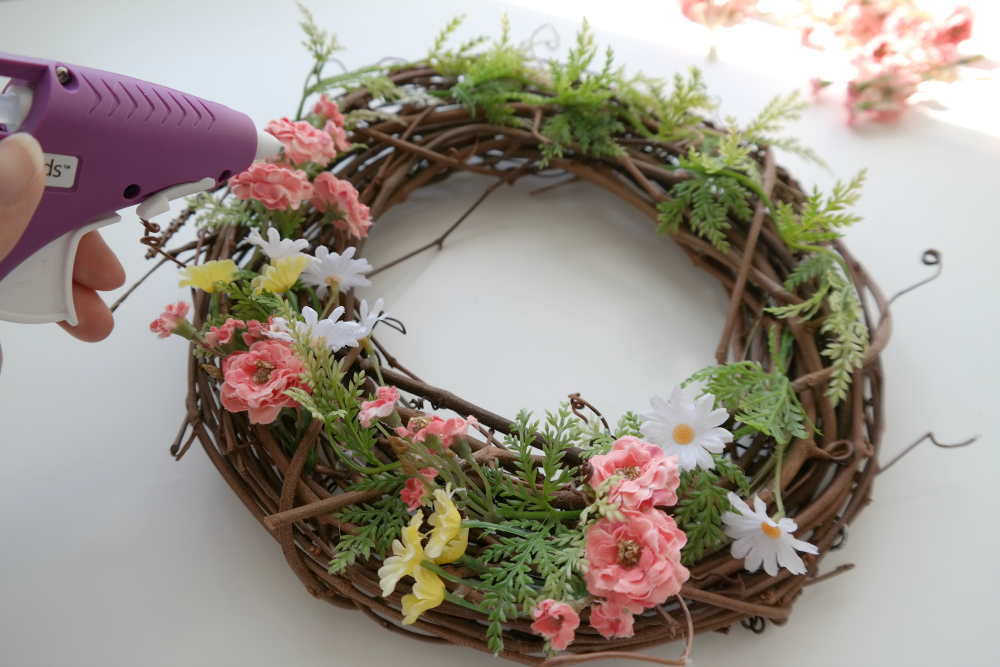 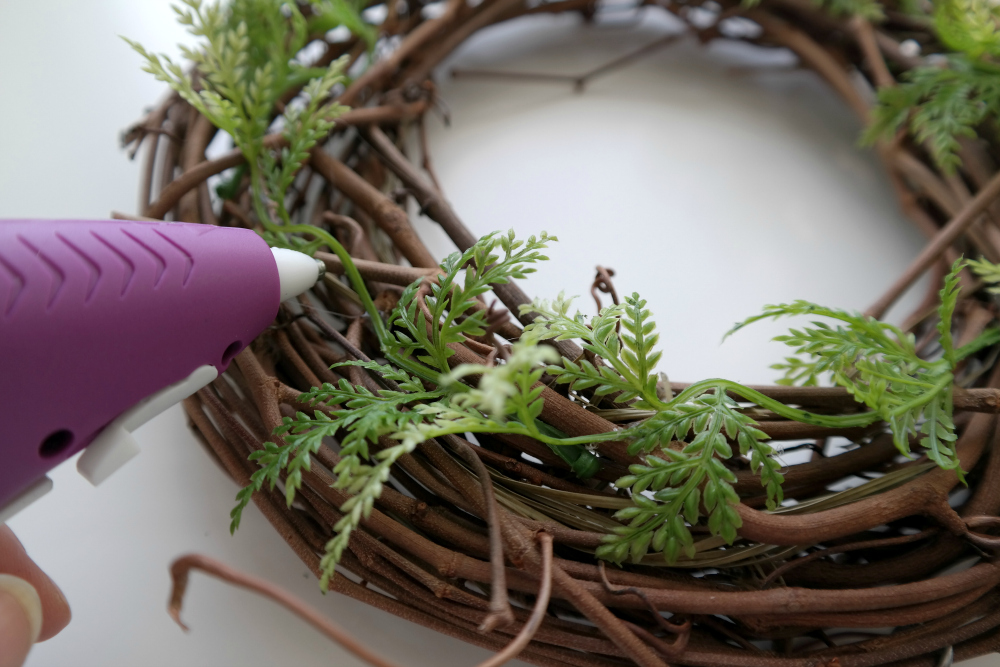 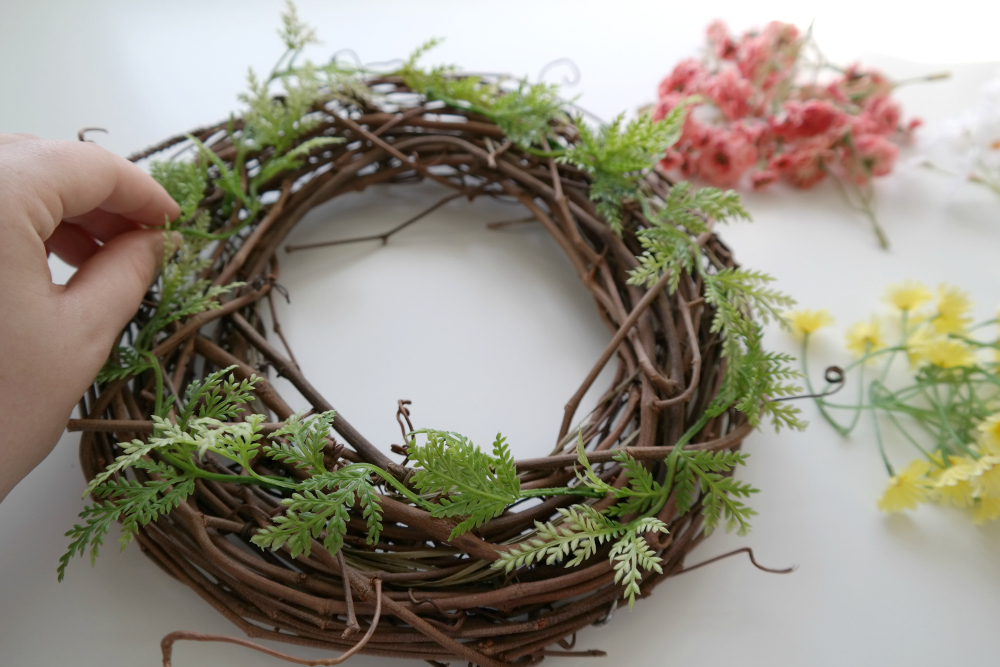 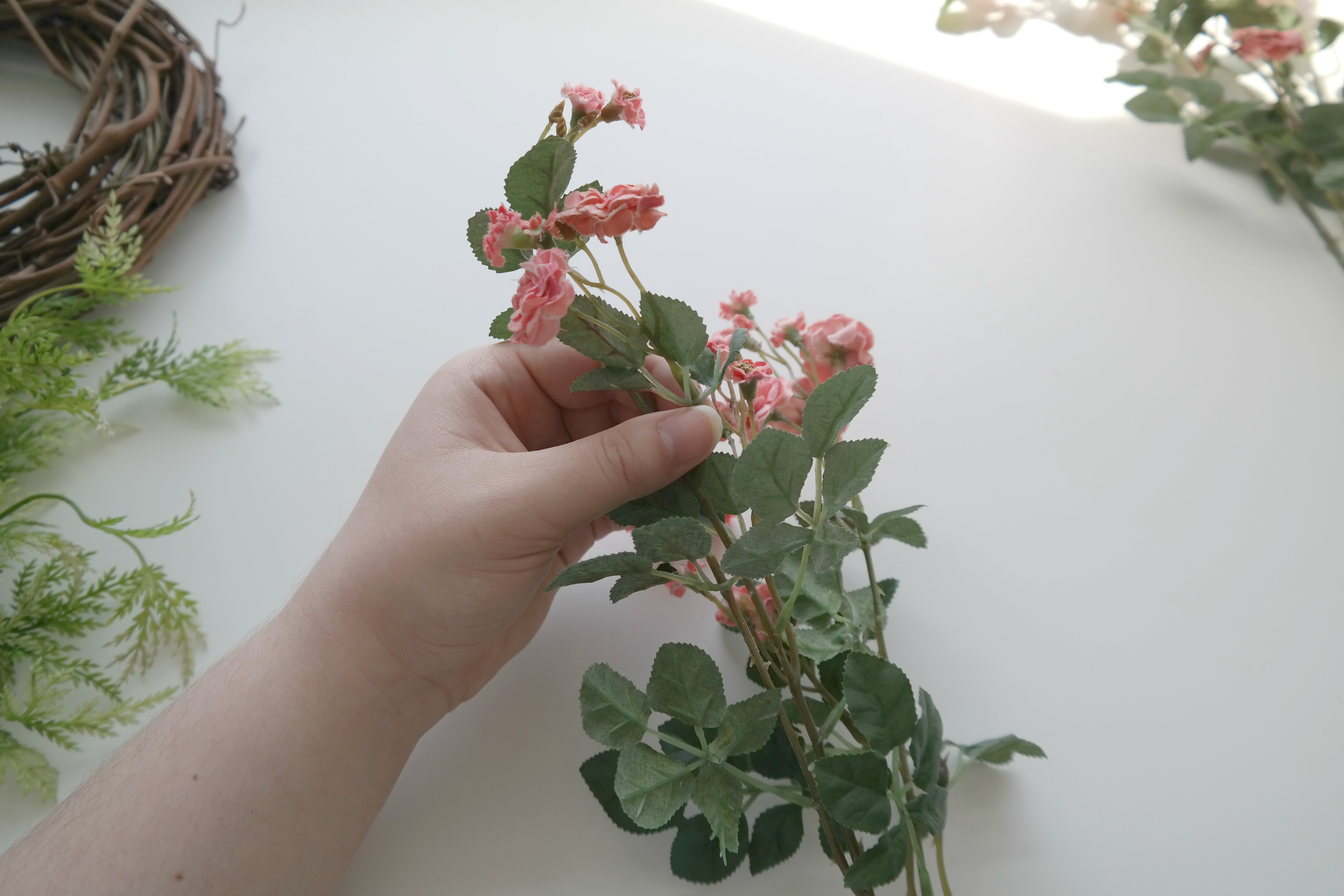 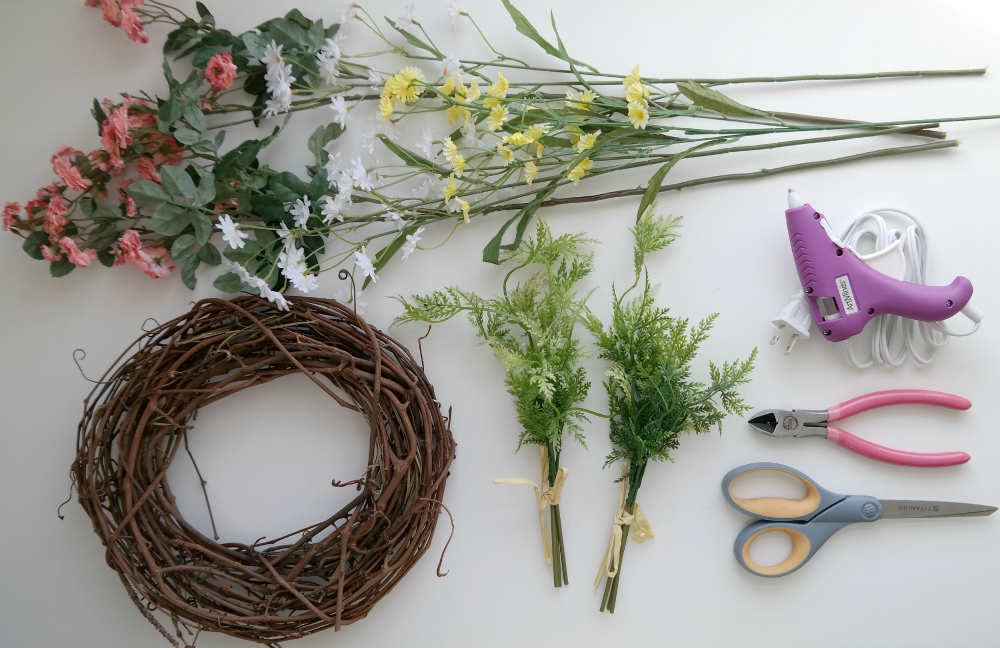 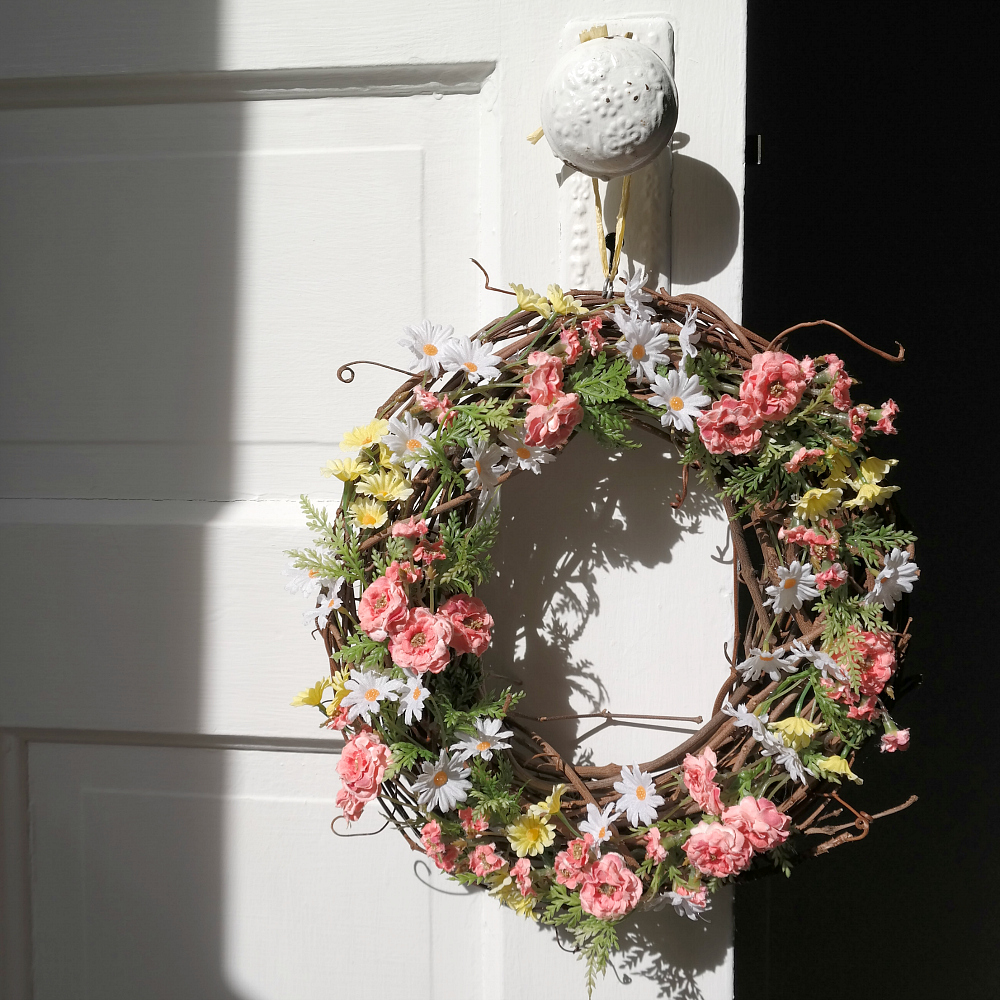 There’s just something about a little floral wreath that is the epitome of spring. You can leave a delicate flower-laden circlet on your wall or door from April through May… or August if you’re a flower lover like me.

Since it’s such an easy yet simple project, I decided to put together a flowery wreath to celebrate spring’s arrival and also start preparing my dining room for Easter dinner. This project took me a little under two hours from start to finish. I’m sure it will take you even less since you won’t be trying to take pictures at the same time.

First, plug in your glue gun so it can begin heating up. Then take your stems and strip them of all their flowers. Some of them may need to be snipped off with your scissors or wire cutters. If you like, you can use the greenery on the stems in place of buying other greenery. I just liked the feathery look of mine.

Next you’ll want to lay your greenery around the wreath and arrange it the way you like. I laid all mine in the same direction and to be honest, it was so simple and pretty and reminiscent of the French minimalistic style, I almost left the flowers out. But for the sake of you reader, I continued on. Feel special.

Take your hot glue gun and, trying to keep your fingers out of the way, glue your greenery onto the wreath wherever the two touch. This may take a bit of nudging and prodding as some wreaths are more spars than others. Mine was full so this didn’t take long at all.

Here is the bulk of your project. Once your greenery is all glued down and stuck in place, start gluing your flowers! I stuck my flowers in the wreath, all laying the same way as the greenery, and just eyeballed what I felt like was needed next. Then I went back and filled in the bald spots. If you’d like more visual, you can arrange your flowers before gluing them down so you can see the finished product before it’s too late. Anyway, the same as the greenery, glue your flowers anywhere they touch the wreath. For extra security, feel free to glue them to your greenery too.

Once the glue is dry, use some ribbon or raffia to hang your wreath in your desired place and you’re done! Happy crafting!