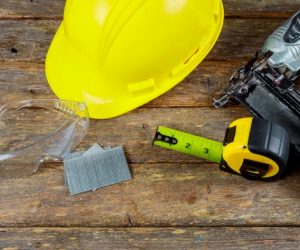 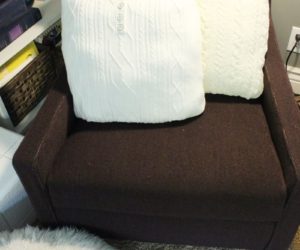 You’ve seen them on hundreds, probably thousands, of projects over your lifetime. Those rectangular blocks are used to build so many different types of structures. But if you had to guess, could you guess cinder block dimensions?

What Is A Cinder Block?

Cinder blocks are a type of concrete masonry block that uses a material called cinder. These blocks are usually shaped like an eight when views from the top and are an efficient way to create construction blocks.

The cinder in these blocks is the aggregate, with cement and sand paired with that aggregate. Because of their hollowness, they make the most out of the material that they are made from, which we’ll talk more about later.

What Are Cinder Block Dimensions?

Their real measurements are more apt to be 7 5/8-by-7 5/8-by-15 5/8. The reason that the measurements are smaller is to accommodate the mortar that goes in between them which is generally 3/8-inch thick.

This makes it much easier for masons to calculate how many blocks they need. It may not seem like much but when the building is multiple stories high, this could end up being hundreds of inches, or feet.

Another thing to remember is that cinder blocks usually have two large holes in them with a 1-inch divider between holes. The indented ends are 1 1/4-inch deep and can vary in width greatly from less than an inch to multiple inches.

We get this question a lot. Is a cinder block different than a concrete block or some other type of block like a cement block? Well, the short answer is that they are all concrete masonry units or CMUs.

The only difference is that they have a different aggregate. Aggregate is coarse- to medium-grained particulate material used in construction. It is the most mined material in the world, considering there are so many different types.

This is the main thing that separates the different types of construction masonry units. But let’s break that down a little bit more:

We already know how much brick costs and even how much a fireplace costs. But what about cinder blocks? Are they more expensive or cheaper than brick and stone? Let’s find out together by comparing them.

The average cost of a cinder block is $2. But when you add in labor, you will be paying around $10 per square foot. This means that a 10×10 wall would cost $1000 if you had someone build it for you.

However, it would cost less than $300 if you did it yourself. So that’s a huge factor here. Doing things yourself saves money, but figuring out if it’s worth it isn’t easy. But how does that cost compare to bricks?

Bricks average between $2.50 and $8 per square foot.  When you add labor in, you can expect to pay about $15 per square foot. But the range for this is much larger than it is with cinder blocks with a more steady price.

If you pay $15 per square foot, you will be paying 50% more than you’d pay for cinder blocks. But in some cases, the labor costs for bricklaying can be even more.

Now let’s get to the stone. This has the widest price range because it highly depends on the type of stone you choose. Stone can cost anywhere from $15 to $50 per square foot. But this can be even without labor.

So yeah, need we go further? Stone is much more expensive than cinder blocks. Unless you gather the stone yourself on your own rural property. This is rare but it can happen if you live in certain areas.

If you think cinder blocks are boring and have no use for your home, then think again. Here are some projects that are so impressive that we just had to share! Try them yourself or simply draw inspiration from them.

Keep in mind that these are primarily for inspiration so you can find out more about what cinder blocks can do. Perhaps you can even find out what type of cinder block project you have waiting for you in the future.

This team is so talented that they can use cinder blocks for the base of any pizza oven. They use stone veneers, brick, clay, and more to create unique pizza ovens. But the base is always made with the same cinder block kit.

This particular company, Grills’n Ovens, creates the most amazing ovens. It’s amazing when a company can take your vision and turn it into a reality. Just check out their extravagant lion pizza oven!

Planting a tomato garden, or any garden really has never been easier. Cinder blocks offer natural holes and slots to bury small plants and can be placed together for bigger plants. It’s way cheaper than a nice stone bed.

You can also get really creative and cover the cinder blocks with veneer or something similar. For indoor pots, use tiles to make them blend in with the interior design better. Try matching your floor or countertop tiles! From Instructables.

Here’s a great way to make a cinder block garden appealing. Use them to build a wall with adorable slots in random places. This flower garden is adorable and eclectic. If you like small plants, this is perfect for displaying them.

If you’re struggling with finding out what type of plants you want for your cinder block garden, we’ve got you covered. You can check out the best indoor plants or where to buy plants online for some more suggestions. 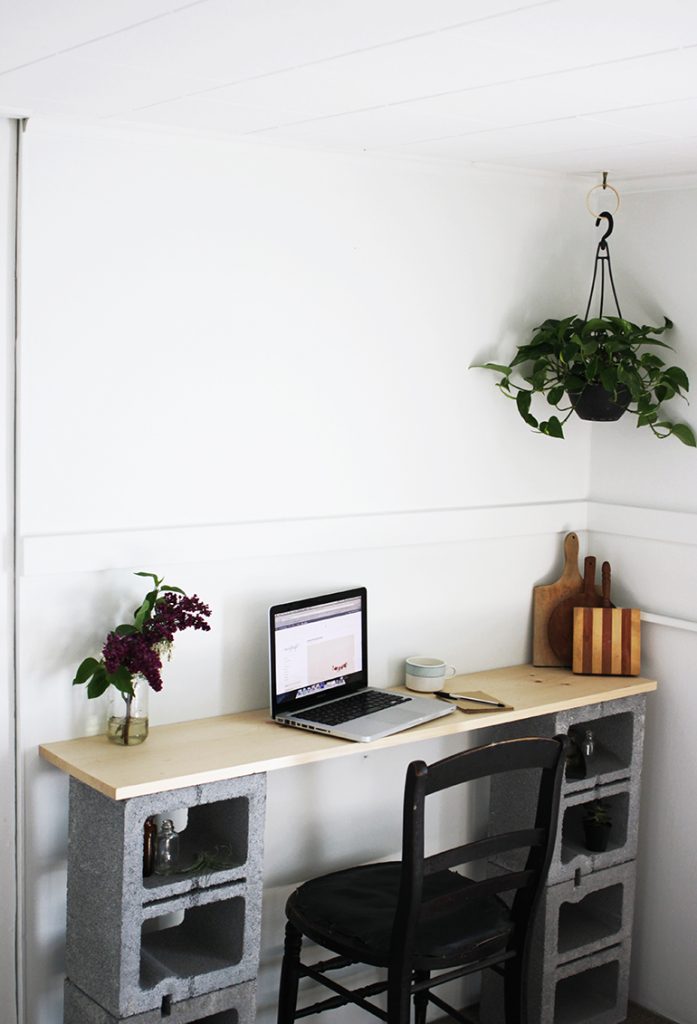 Everyone needs a desk these days, and a cinder block desk is an affordable and adorable way to get one. You can even make a concrete desktop for your cinder block table and use unique cinder block dimensions.

If you prefer to move your desk a lot, then you should probably do a temporary wood top to make things easier. Don’t forget to put the slots outward so you can use them as shelves. Isn’t it a great modern look? 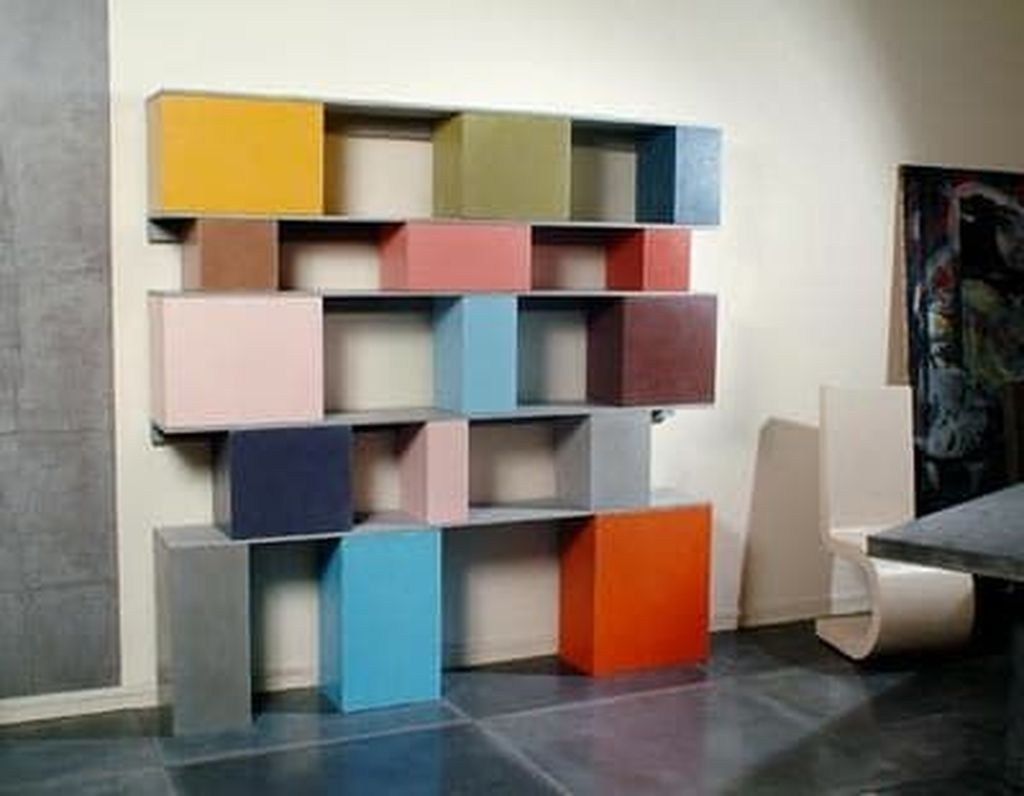 Have you ever considered painting cinder blocks? What about putting pavers on the end to create full blocks? That’s what this project proves you can do. The result is gorgeous and creative and can get your creative juices flowing.

It’s very important to make sure what you build won’t collapse. Cinder blocks are quite heavy and can cause some damage. So get an architect to help out or build on a small scale to make yourself feel secure with it. 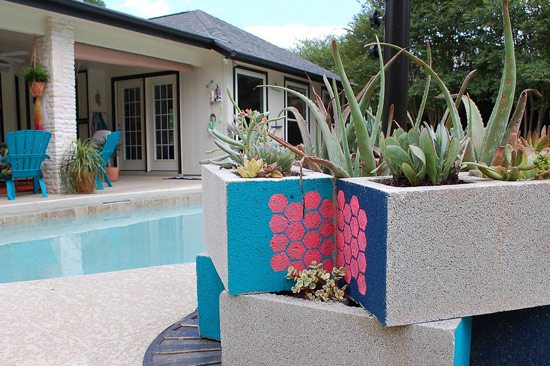 Have trouble getting your umbrella to stand up by the pool? Or, perhaps you never considered stenciling cinder blocks. Well, this project is a great inspiration for people with these two problems.

The reason that you stack it in a circle is so that the umbrella has more room to angle when the sun changes. It also helps that the hole is deeper so it has no chance of falling over. Cinder blocks are sturdy!

Cinder blocks may be too uncomfortable to sit on without any support. But you can add throws, pillows, or even cushions to them to create an outdoor paradise with any type of vibe you can imagine.

Remember to take the cushions inside when it’s raining. Thankfully, the cinder blocks themselves will be more than safe. They will last for ages without any problems due to the weather!

So you see, cinder blocks are quite a bit more useful and appealing than most people think. Since they are generally cheaper than stone or brick, they are definitely something to think about. So consider using them for your next project!