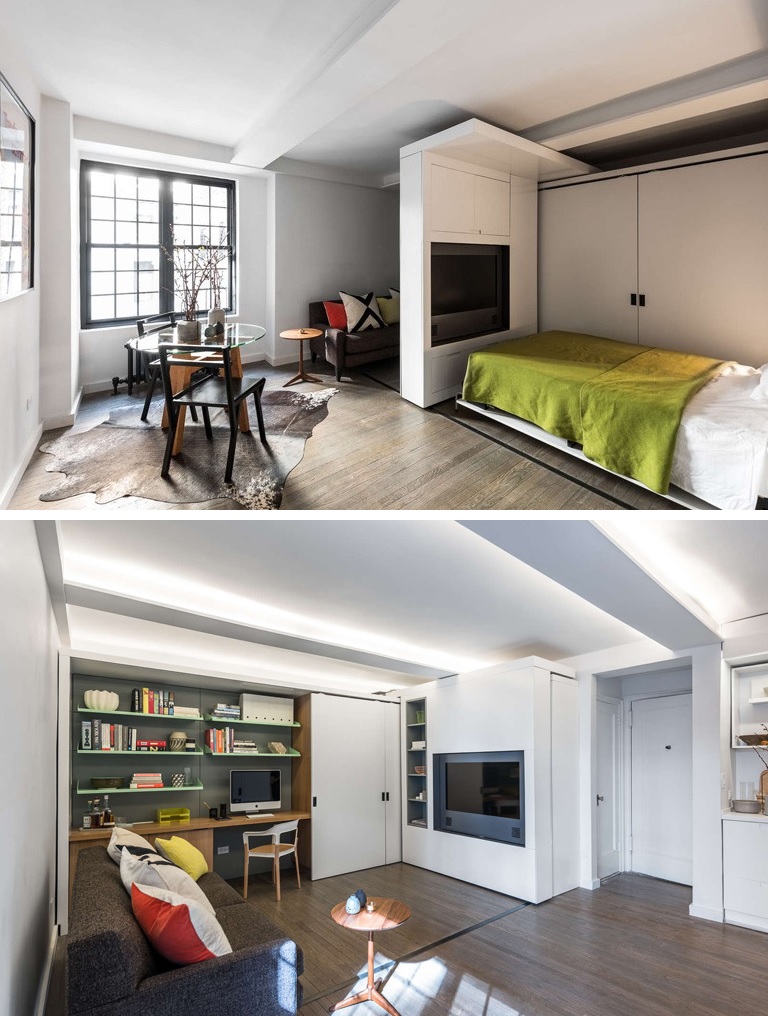 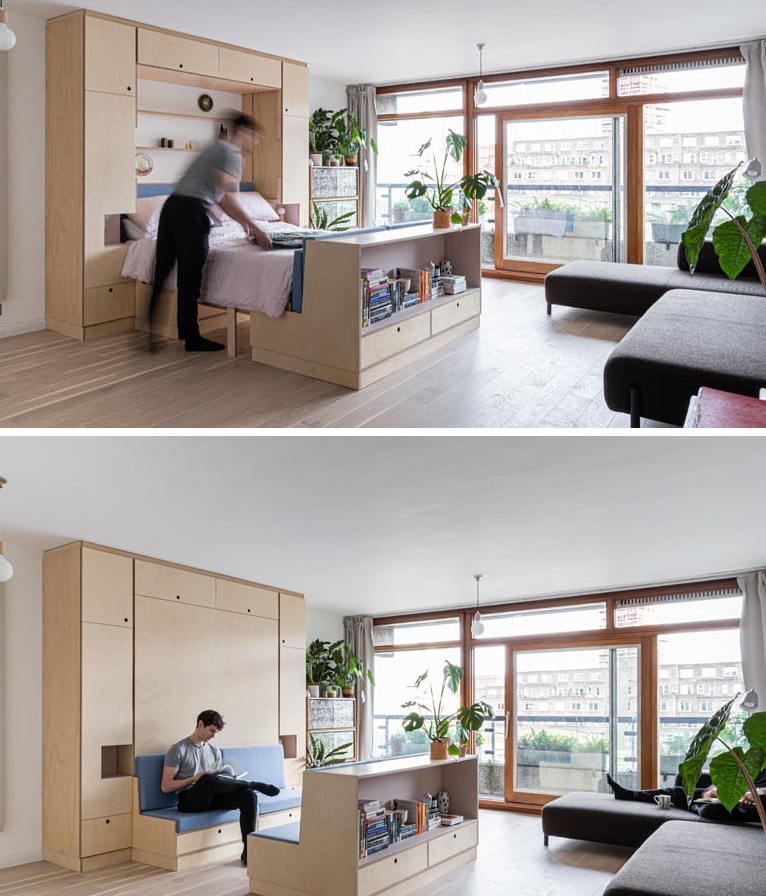 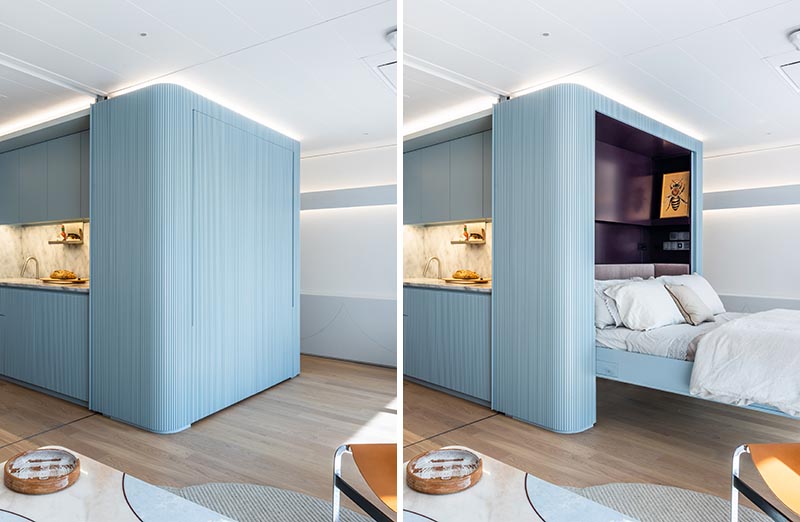 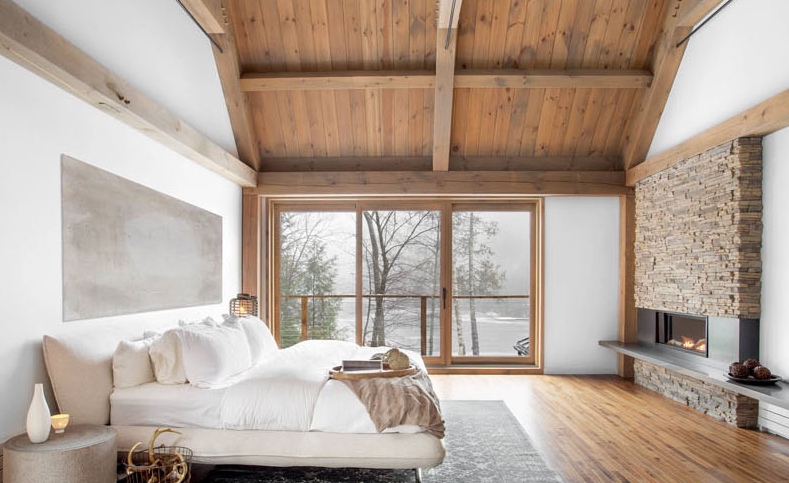 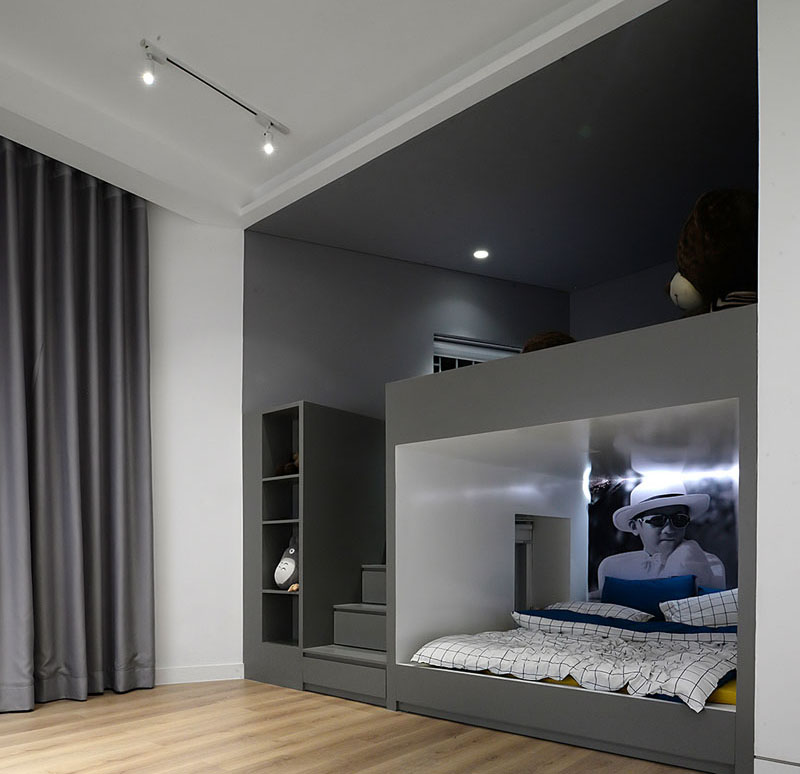 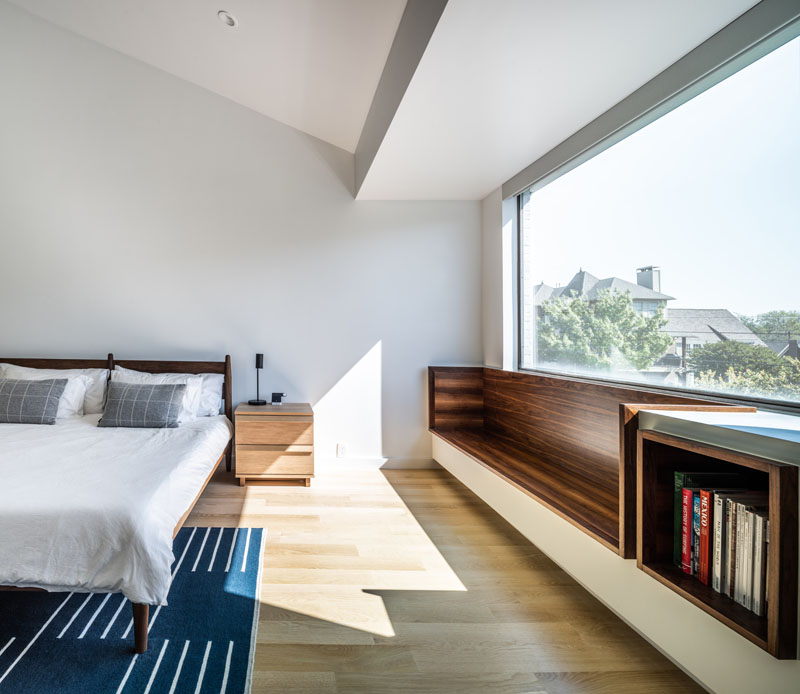 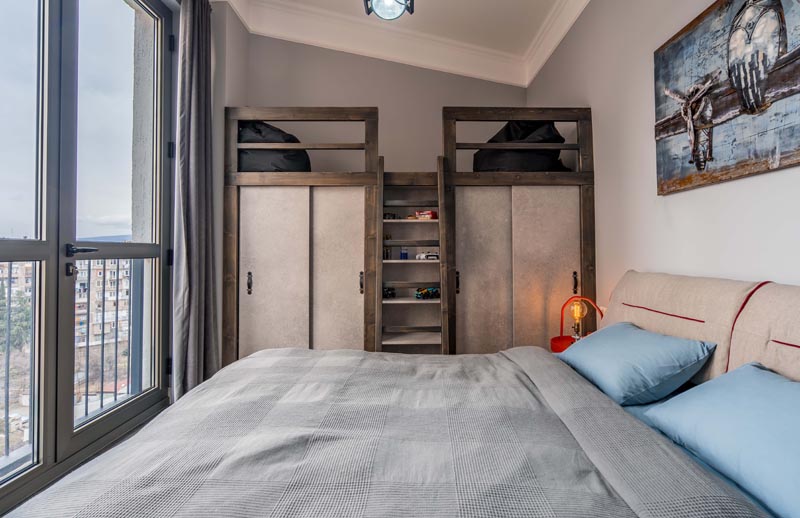 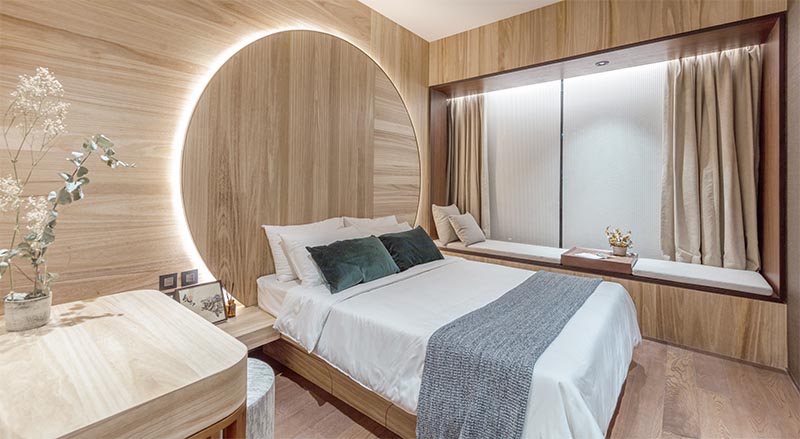 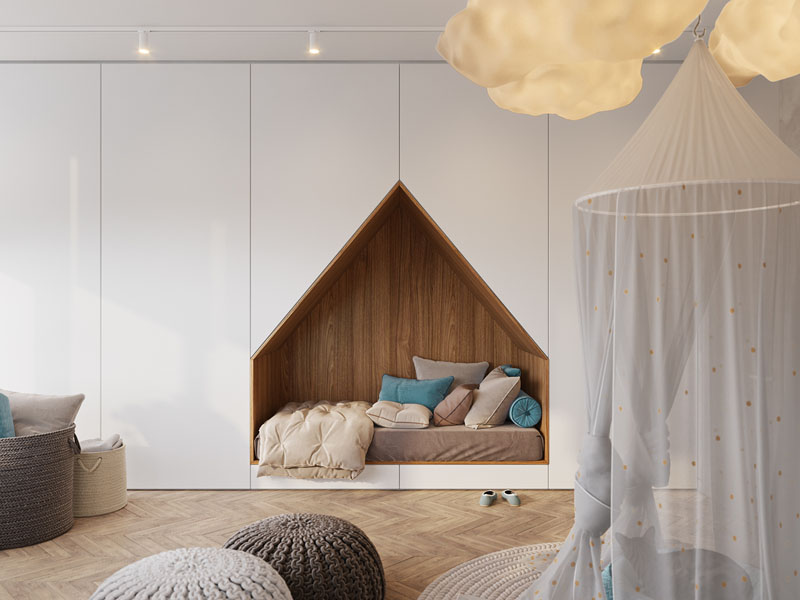 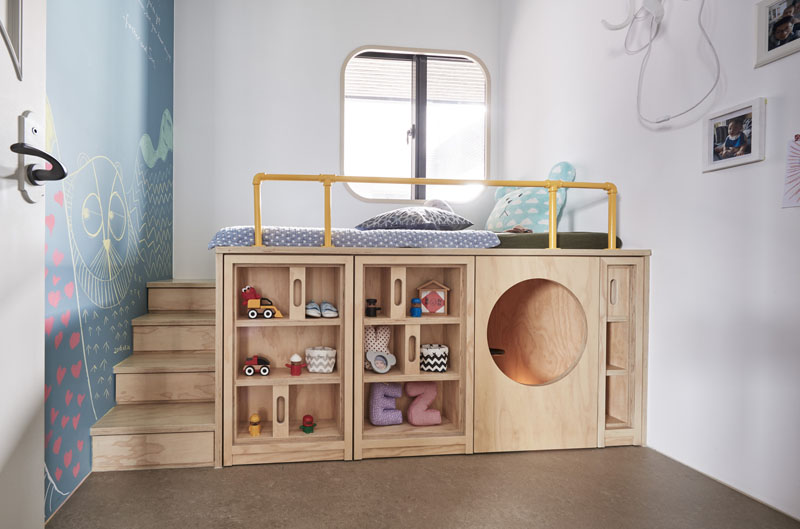 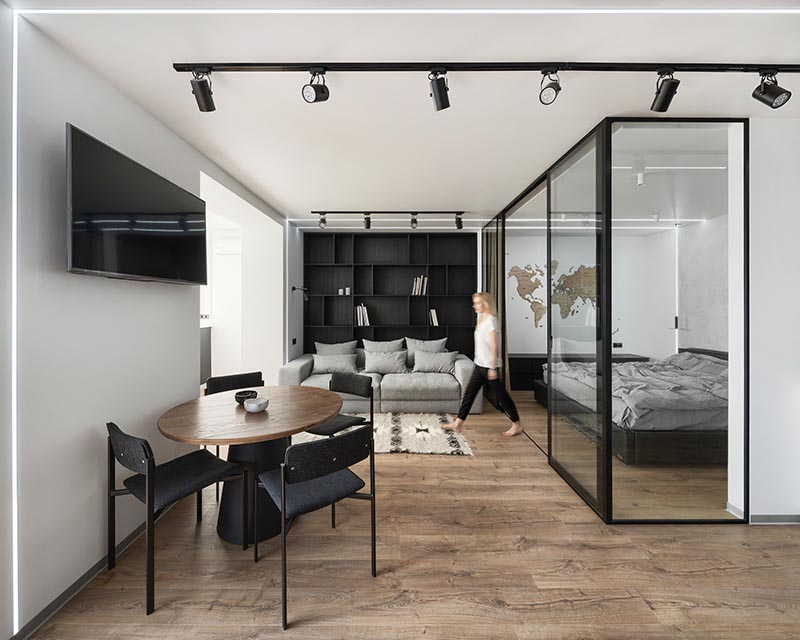 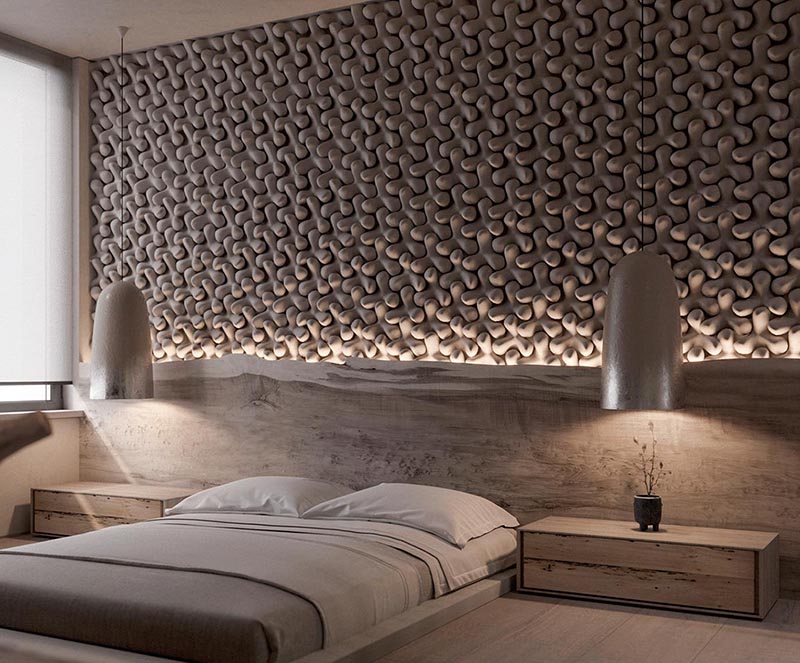 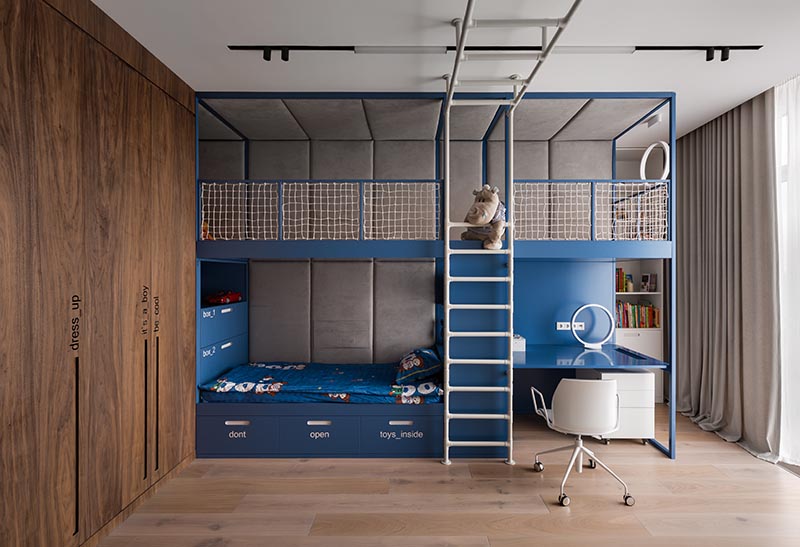 Every room within a house has a centerpiece, a main element which defines that space. For the bedroom that would be the bed, the piece that gives this room its name. There’s some variation when it comes to all the different types of beds to include in here based on various specifics. Since there’s no way around the fact that every bedroom needs a bed, it makes sense to make this element as interesting and as great as possible. There’s no shortage of ideas when it comes to bedroom designs with cool beds so let’s jump right into it and check out a few examples.

The actual bed is just one part of this custom structure designed by YODEZEEN, They gave this room a big, multifunctional structure which includes a bed and a desk at the bottom and a ladder in between them that leads up to a play area. The ladder also transitions up onto the ceiling as a series of monkey bars. It’s a really fun way of making the most of the small space inside a kid’s bedroom.

Speaking of small spaces, there’s usually one thing a lot of bedrooms struggle with and that’s storage. The dilemma is that there’s not enough space for a big closet and for a bed, not in the traditional sense at least. There are however alternatives and cool bed designs that solve the problem. One example is a design created by Anthill Studio which placed the bed on top of a platform with steps, shelves and storage surfaces all around it. The mattress can be lifted up to reveal a big storage area underneath.

It’s not just the bed itself that matters when designing a bedroom but all the features and accessories around it and the way in which it blends into the room. A great example of a truly mesmerizing and immersive design is the bedroom created by Sergey Makhno Architects. It’s such a relaxing and sophisticated-looking space and a lot of that is due to the accent wall which is covered in 3D tetrapod tiles that create this really cool texture and a gorgeous effect when the accent lights are on.

This is a very minimal bedroom which only includes the essentials. The bed is the centerpiece, taking up the majority of the floor space and sitting in the middle of the bedroom. The room itself is interesting in this case because not all of its walls are solid. It’s separated from the living area by a glass wall with sliding doors which is the solution found by The Interior Workshop for the limited amount of space and natural light in this small apartment.

Multifunctional beds are particularly well-suited for children’s rooms because that’s usually where you’d want to include several different functions such as a sleeping area, a space for doing homework and studying and also a play area not to mention the storage requirements as well. This custom bed design was created for a toddler’s room and is an all-in-one piece. It has the actual bed at the top with a safety rail and a set of stairs with storage drawers built into them. Underneath the bed there’s a series of pull-out storage modules with shelves at the front and also a little hiding nook. This is an interior created by HAO Design.

This bedroom design created by Alesya Kasianenko features an entire wall lined with closets and in the middle of everything there’s a little nook cutout for the bed. It resembles a little house with a pitched roof and it’s a really cozy and cute space. That leaves plenty of space in the room for a desk and a few other elements as well. It’s a really cool bed design and it’s both playful and practical.

Here it’s not the actual bed itself that stands out but the headboard. It’s something that Max Lam Designs created and it’s a really cool and interesting concept. The headboard is big and circular and there’s lighting glowing around the edge from behind which creates a beautiful effect. This is also a cool and ingenious way of adding accent lighting to a bedroom without relying on traditional lamps or sconces.

It would be really nice is every bedroom could have space for a little conversation area with a couple of chairs and a small table. That however is not usually the case. The bed takes up most of the floor space in the room which leaves little room for anything else. It wasn’t any different here but the element that made a difference was the high ceiling. Interior design studio 4VISUAL  took advantage of that and created a custom storage unit with a little seating area on top that can be accessed via a ladder.

Speaking of bedrooms with seating areas, there’s also a really nice design created by studio OFFICIAL which we want to share with you. This time the room is fairly spacious and as usual the bed takes center stage. The room has a big panorama window and it was right below it that the designers added a custom bench with some built-in storage on one side. It’s a perfect spot to relax in and read a book or look out the window.

Bunk beds are great space-savers, especially for kids’ bedrooms. They allow a small room to be more than just a sleeping area. This for instance is a modern bedroom where one section has been dedicated to a custom bunk bed unit with built-in stairs and a little bit of storage as well. That leaves the rest of the room open and allows it to be used as a playground. This cool interior was created by studio Minimal Design.

This beautiful bedroom designed by Catlin Stothers has a barn-inspired look with a wooden ceiling, exposed beams, a stone fireplace and an amazing antler chandelier. It also has a variety of contemporary elements in it like the bed itself which features soft curves, smooth edges and corners and an overall super comfortable look. This combination of styles creates a very warm, welcoming and chic ambiance in the room.

The entire bedroom inside this small apartment designed by studio Michael K. Chen Architecture (MKCA) is completely hidden and that was made possible by the Murphy bed design. There are actually two wall beds in here and they’ve cleverly hidden away and built into the furniture units. One is concealed behind a small sofa and the other one is built into the side of the kitchen.

This apartment designed by Intervention Architecture also has a Murphy bed and that allows the bedroom and the living room to be one and the same space. There’s a sectional sofa along one of the wall and directly opposite to it there’s a comfortable seating area with two upholstered benches facing each other, one of which doubles as a shelving unit and a space divider. The bench cushions can be removed and the their bases become supports for the fold-down bed at night.

Having a hidden bed inside a wall is definitely really cool but what’s even cooler is to have an entire wall that can be moved out of the way to create a whole new separate room. That’s what you can see in this small apartment designed by MKCA. The wall moved between the living room and the bedroom, switching between the two as needed. That was possible in combination with a Murphy bed which allows the bedroom to become super compact when not in use.