Some of the most interesting destinations in the world can be found in unusual places. For example, a hotel or a restaurant built in a cave is definitely something unique. In fact, there are several such projects worldwide and we have put them all together in this article. There are also plenty of other very interesting projects out there so dare to explore and to find out more about them.

A hotel in the caves of Matera. 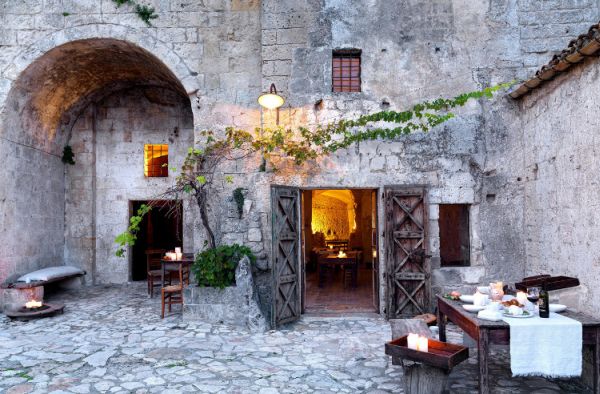 We’re going to start with Le Grotte della Civita. It’s a beautiful getaway destination and a project by Sextantio Albergo Diffuso group. It’s a remarkable hotel that can be found in the caves of Matera, in southern Italy. Here, in this beautiful historic town, time seems to go slower. Here you can find ruins from the Neolithic age along with lots of interesting and unique attractions.

The developer of this project had as a goal to create something unique but to also revitalize the village and to attract tourists. But even though in theory the project seemed simple, completing it turned out to be a real challenge. First of all, the caves of Matera were in very bad shape and, in order to be able to build a hotel in there, everything had to be restored.

Eventually, what was initially just an ambitious plan became reality. Now the caves are housing an amazing hotel. The new structures benefits from more than just an unusual and beautiful location. You can see many unique features inside the hotel. For example, one of the guest rooms has an extremely old stone basin sink while others have old floors and rough stone features.

A Medieval Hotel in Italy.

We remain in Italy and we now present you the beautiful Sextantio hotel. It’s situated one and a half hours away from Rome, in the middle of the Appennines. Here, in Santo Stefano di Sessanio you can find a series of buildings that have been bought and then revived by hotelier Daniele Kihlgren. The entrepreneur is strongly committed to restoration using only local materials and this was the case for the hotel we’re talking about as well.

As you may have already noticed, this is not a typical hotel. That’s because in is deeply ingrained in its foundation. But the uniqueness of this place is better expressed and more visible once you step inside. Then you can find rooms with stone walls, rough finishes and a very organic interior décor. The atmosphere inside is very different from that is most hotels and this is what makes this place so special.

We’re now going to explore another interesting region of Italy so we’re going to focus on Margreid. Here you can find what could be the most unusual fire station you’ve ever come across. The fire station was a project by Bergmeisterwolf Architekten and it was built in a cave. The façade is a concrete wall and behind it you can find three caverns. This wall is the main architectural element of this structure and it was designed to also offer protection against falling rocks.

The fire station contains two garages with folding glass doors and an office and administration wing which is actually a glass cube. The interior design of the fire station is simple and it was built with simple materials like glass and steel. They were used for the durability as well as for the fact that they create a modern and airy feel.

Restaurant Set Inside a Cave in Southern Italy. 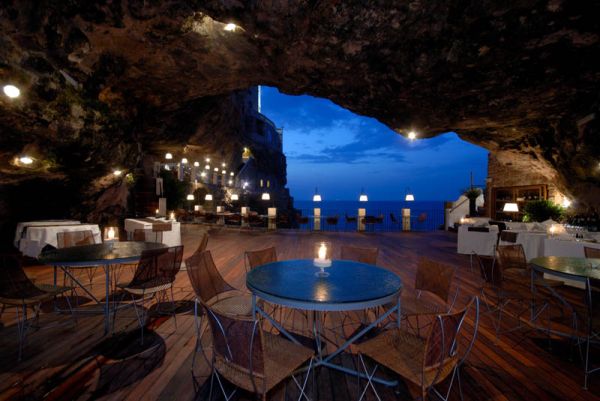 Italy has so many beautiful locations and destinations that we decided to stick around a little longer so we found this place. It’s called Grotta Palazzese and it’s an amazing restaurant that can be found in the town of Polignano a Mare in southern Italy. Here you can have a unique dining experience and it’s not just because everything is delicious but also because of the unusual location.

The restaurant was built inside a vaulted limestone cave. Moreover, it offers splendid views of the sea. Given the location, the restaurant is only open during the summer months. Grotta Palazzese is part of the Grotta Palazzese hotel which is located just above it. It is definitely a marvelous attraction. Imagine yourself enjoying a romantic dinner, in a room with stone walls and ceiling, organic forms and subtle lighting, while listening to the water crash against the shore. It would be an unforgettable experience. 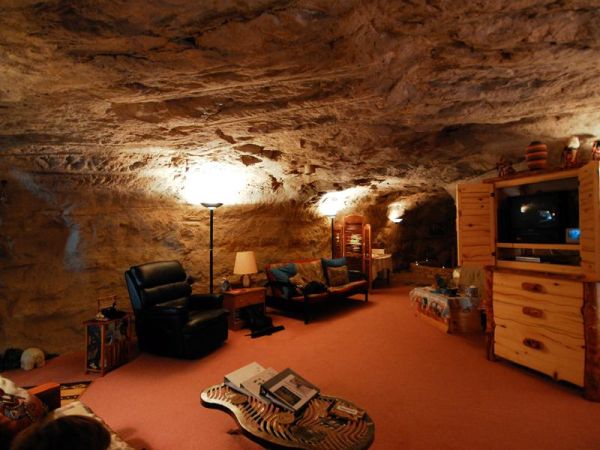 We are now leaving Italy and we’re focusing our attention on a region found north of Farmington, New Mexico. Here you can find Kokopelli’s Cave, a unique destination that, as the name suggests, was built in a cave. The cave we’re talking about is not a natural creation. It was blasted in the ‘80s. a while ago it was transformed into a very beautiful and inviting one-bedroom space that you can choose as your getaway destination.

The 1,650 square foot space has a fully equipped kitchen with everything one needs including a double door refrigerator, a microwave oven and a washer. It’s beautifully furnished and it’s actually quite luxurious as the bathroom even has a Jacuzzi. Here you can enjoy an amazing vacation. You’ll be staying in this inviting, quiet and relaxing space and you’ll be able to enjoy the spectacular views. It’s a very peaceful place that offers luxury in an unusual form.{found on explore}. 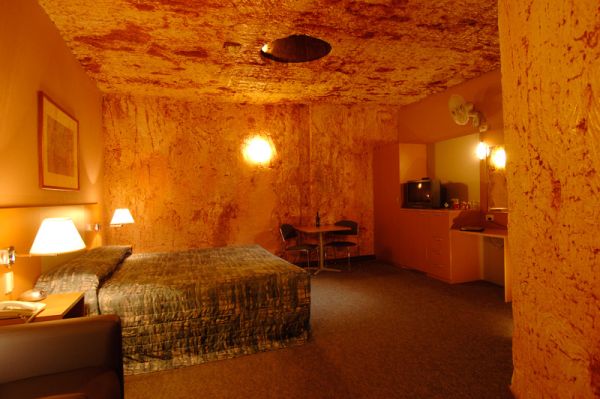 Let’s now move on to another beautiful and unusual hotel. This is The Desert Cave Hotel and it’s an underground structure that offers its guests a unique experience. The hotel allows you to experience dug-out style living and it offers, besides inviting rooms, a series of underground shops, a bar and beautiful views. Located in the heart of Coober Pedy, the hotel is surrounded by sandstone and it’s a unique accommodation.

As guests, you’ll be able to stay underground or, if you prefer something less unusual, you can choose one of the above ground rooms. All the rooms in the hotel have high ceilings and very beautiful interior designs. The underground rooms are more than just regular spaces in an unusual location. They are very relaxing and they offers their guests to unwind and to spend some time away from everything that’s going on on the surface. 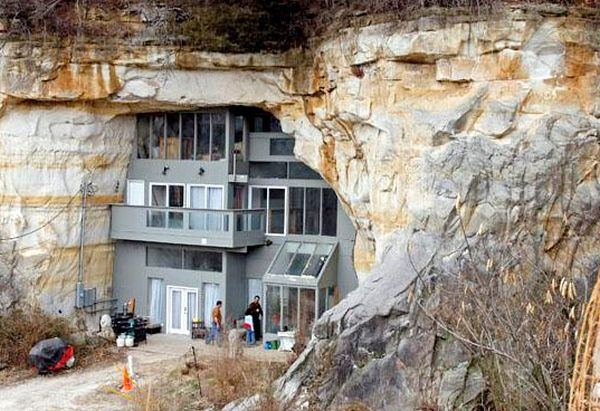 All these amazing hotels offers such a unique experience and they even make you wish you would be able to enjoy that feeling every day, in your own home. Well, you wouldn’t be the first one to have such an unusual home. Here’s a very good example. This is a hybrid home built inside a cliff. It resembles a cave but it’s actually quite different.

The house has several levels. It uses geothermal energy and this also makes it sustainable. It’s functionally structured and it contains the living area which is in the front , the bedrooms which are situated above this space and also a large recreation area in the back. The overall design is simple and organic but it’s also modern. The antique furniture gives it a very charming look white the stone walls and all the other similar details make it a unique residence.

Next on our list is this stylish home located in a small coastal village in the Tramuntana region of Majorca. It’s the hole of French fashion and furniture designer Alexandre de Betak. As you can see, the design of this place was inspired by cave dwellings. The interior design and décor feature organic forms and nature-inspired elements. Moreover, the views of the Mediterranean Sea only make the whole place seem even more beautiful.

Inside, you can see rustic wooden beams as well as wooden doors and furniture which add warmth to the space and a very nice balance with the stone surroundings. The house is also an eco-friendly construction. The most difficult part of this project was definitely finding the perfect location for the house. Once it was finished it was like a dream come true. It’s definitely a unique home that ignores most of the rules and follows its own path.{found on TMagazine}.

And speaking of unusual and organic houses, we found one that looks very charming. When you first lay eyes on it, it seems to resemble the structures from the Flintstones TV series. It’s actually a modern version of those dwellings. The house can be found on a remote headland in Malibu and it’s a spectacular retreat.

Sitting on 22.89 acres of land, this house offers amazing and panoramic views of the Pacific Ocean, Channel Islands, Boney Mountains, Serrano Valley, and Los Angeles. The house contains one bedroom, two bathrooms and a kitchen. It’s surprisingly small but once you enter it also seems very spacious. The architect that designed it tried to create a connection with the landscape and the exterior beauty. The rooms have huge windows and feature organic forms and shapes, making this a one-of-a-kind structure. It’s not just visually striking but also very relaxing and beautiful on the inside. 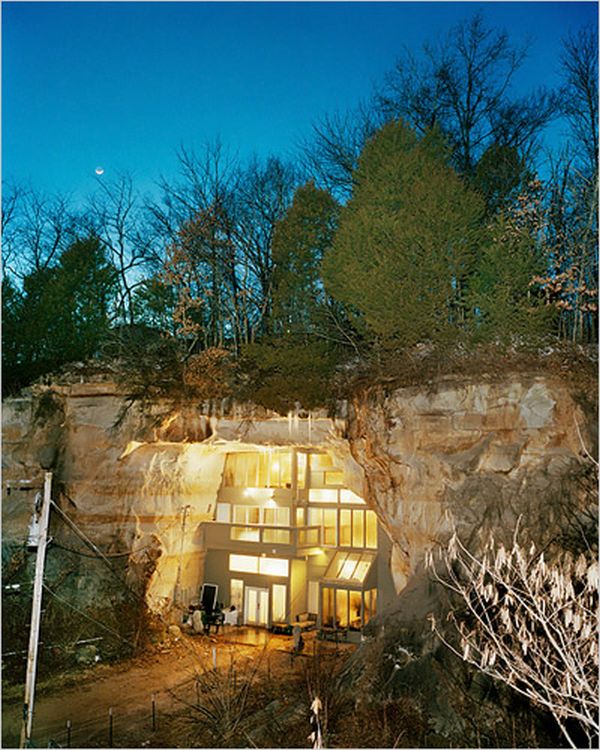 Not many people would think that an empty lot with a sandstone cave would be the perfect place to move into but, when you think about it, it could be a unique opportunity to have a one-of-a-kind home. The owners of this property immediately saw the great potential that this estate had. At the beginning, it was just a three-acre space with an empty cave in Festus, Missouri.

But with some imagination and determination, the cave became a home. Initially the plan was to build a larger home on the plot but then the family decided to exploit the potential of the cave. Now they have 15,000 feet of naturally insulated space that they can call home. The cave’s walls were left untouched but they shed sand so interior roofs and umbrellas were placed over areas such as the kitchen. The cave became an inviting and cozy home with a very beautiful interior.{found on archdaily}.

A cave house on the island of Filicudi.

Even though they’re very unusual, cave homes are not that rare. In fact, here’s another one that we found. This one is located in Filicudi which is one of eight small islands that makes up the Aeolian Archipelago. The island is situated 20-30 miles northeast of the island of Sicily, Italy and it’s where this amazing home can be found.

The house was carved out of sandstone and it has a very organic and unique design. It used to be an empty space without any functional purpose but it then became this amazing and inviting home. After its owners decorated it with artwork and personal artifacts and paintings made by themselves, it became an even more inviting and cozy space. It’s a very charming space with a design and interior décor that definitely have character. Of course, the location alone makes this place amazing and if you also take into consideration the other elements you get a spectacular home. 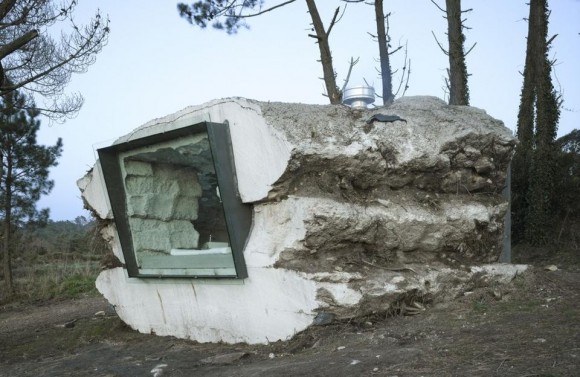 The last destination/structure we’re going to analyze today is the Truffle House. The house was designed and built by Ensamble Studio and it was molded from a fabricated stone which is made out of rough concrete. This gives the house a very interesting and organic look, allowing it to seamlessly integrate into the landscape.

The plan was to build the house with a hollow space in the center. In order to do that, the team working at the project has to put hay inside the structure in order to obtain the hollow space after the concrete would have dried. In addition, the hay also added a very nice texture to this space. This structure can now serve as a tiny home. Even though the interior is tiny, it could be a very interesting getaway and a nice place to spend time alone time. Inside you can find a bed, a fireplace and a sink. The house integrated beautifully into the surroundings. 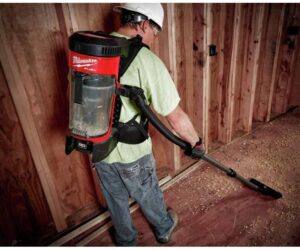 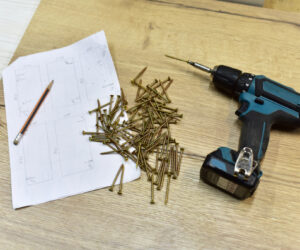 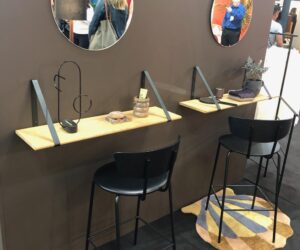 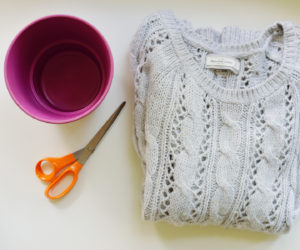 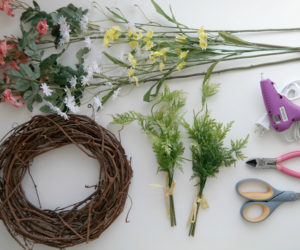