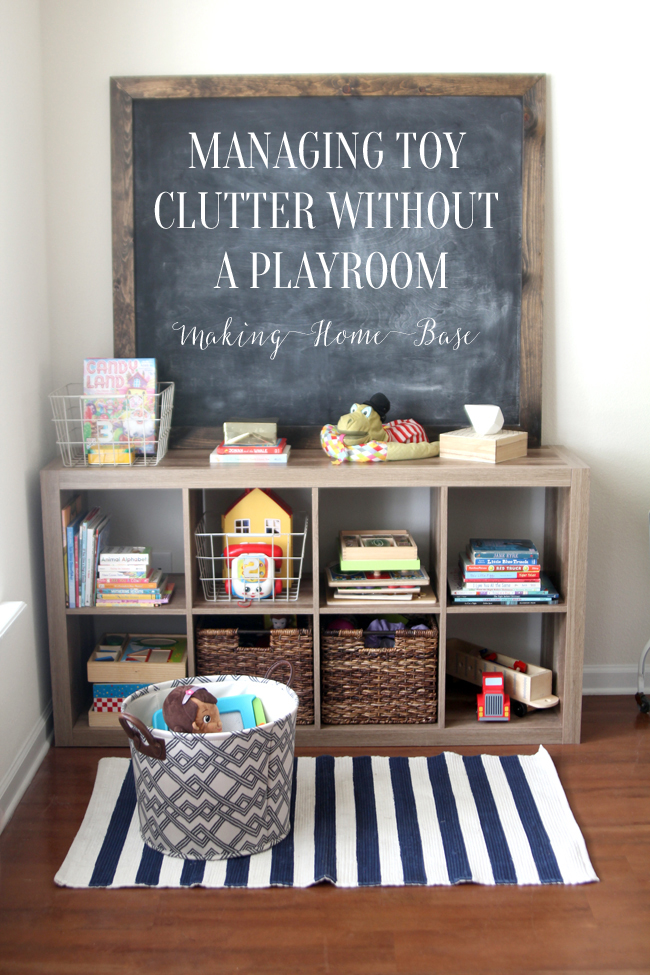 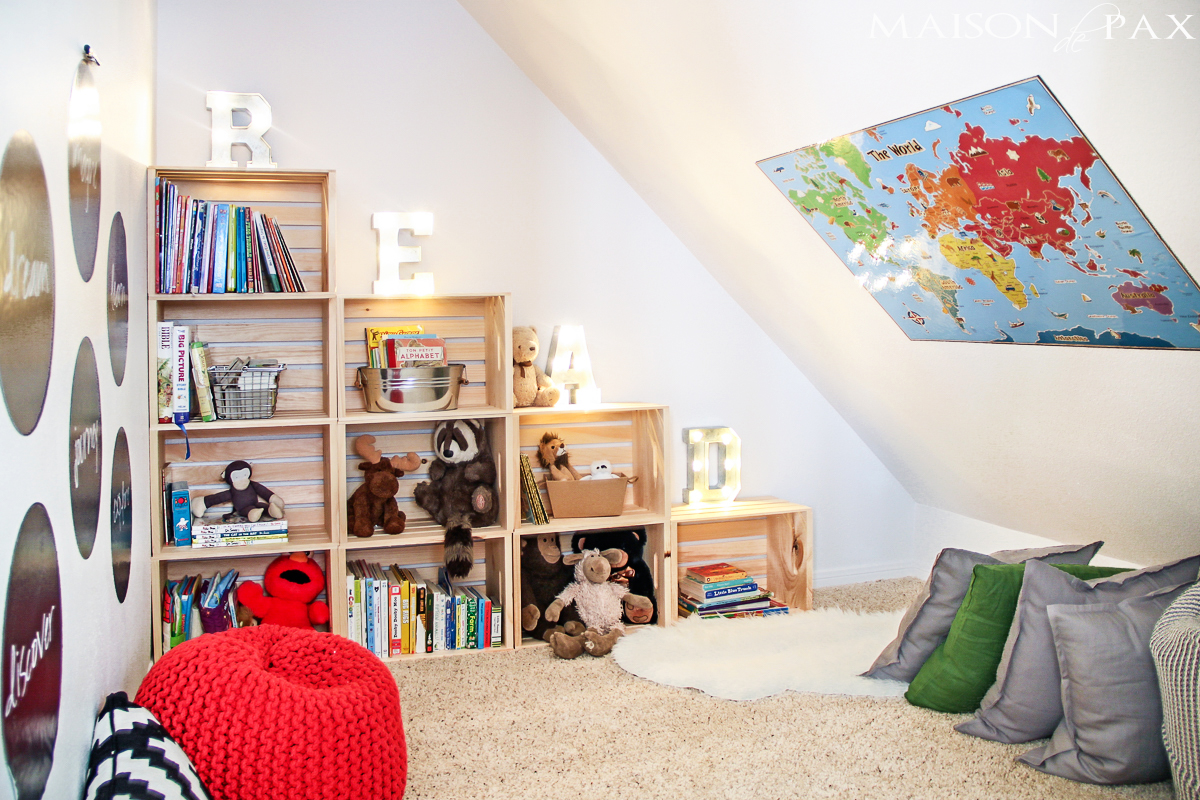 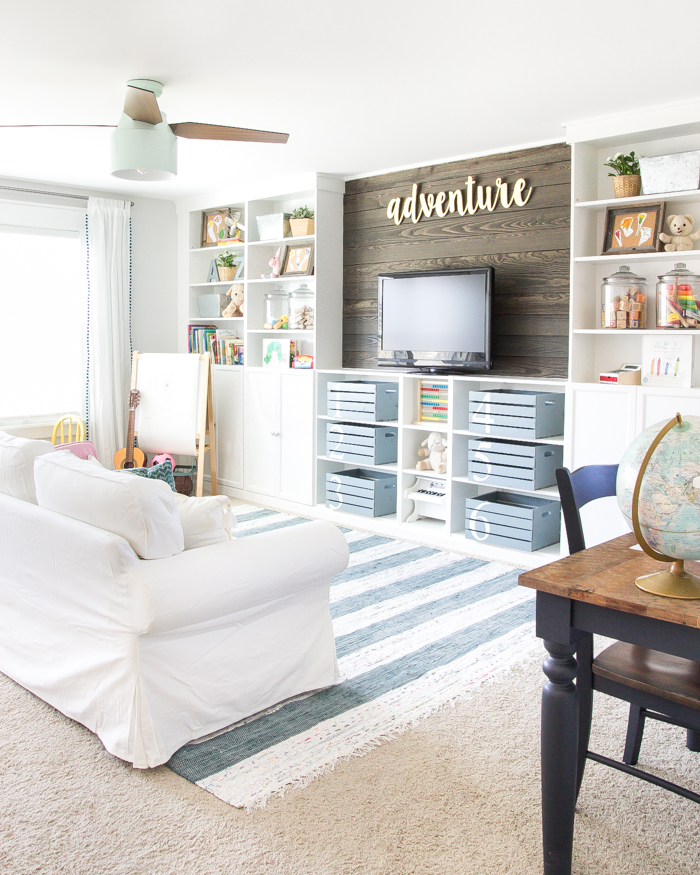 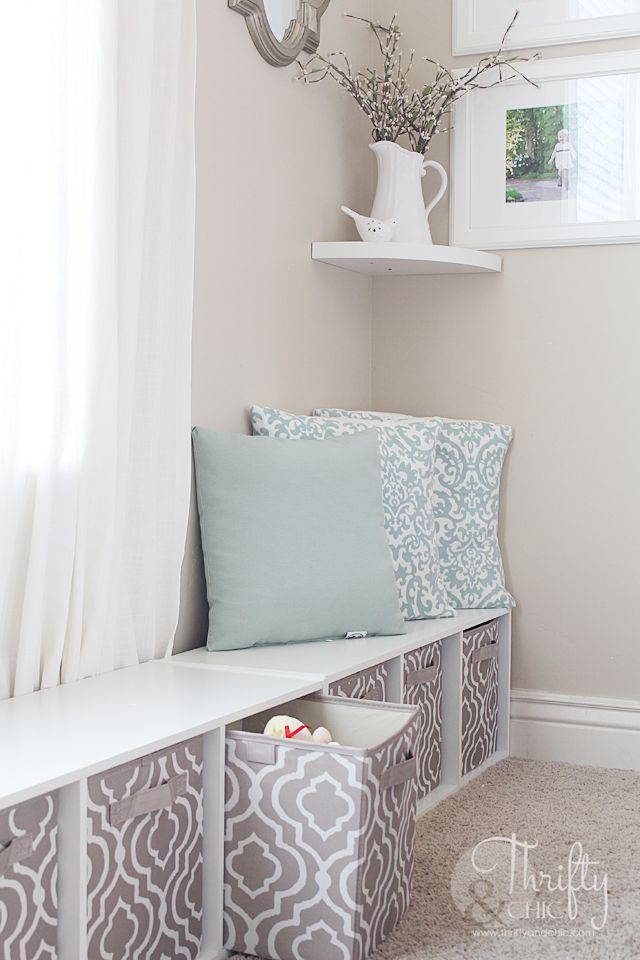 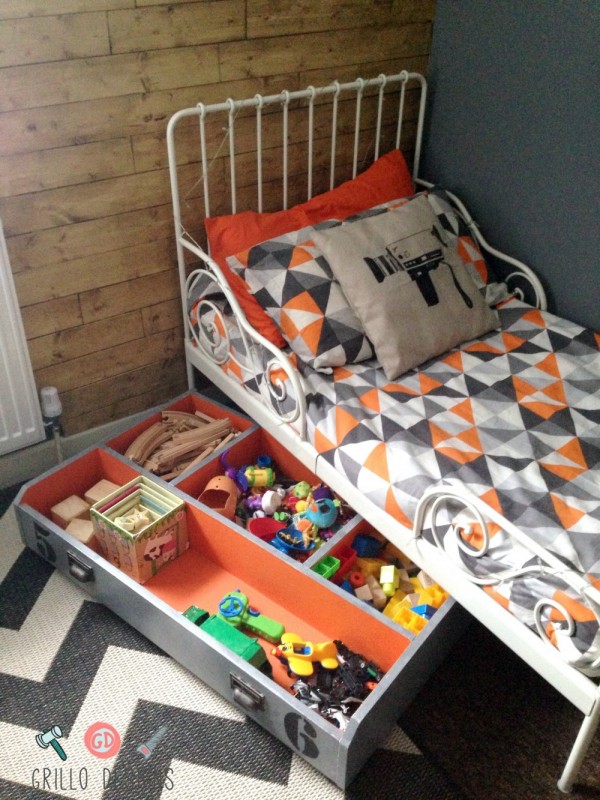 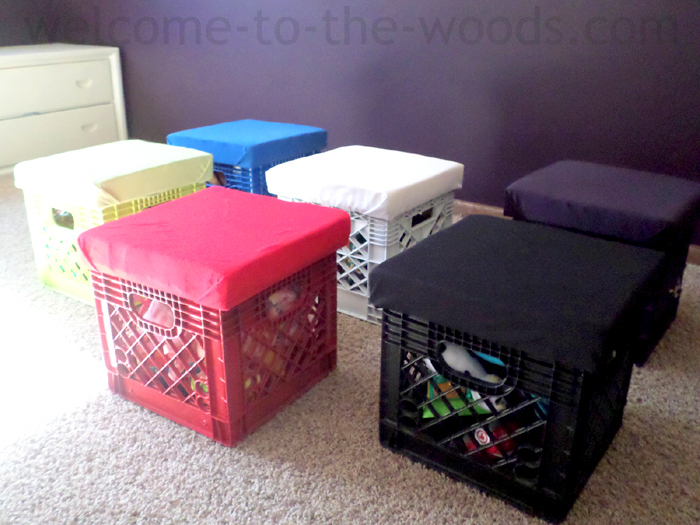 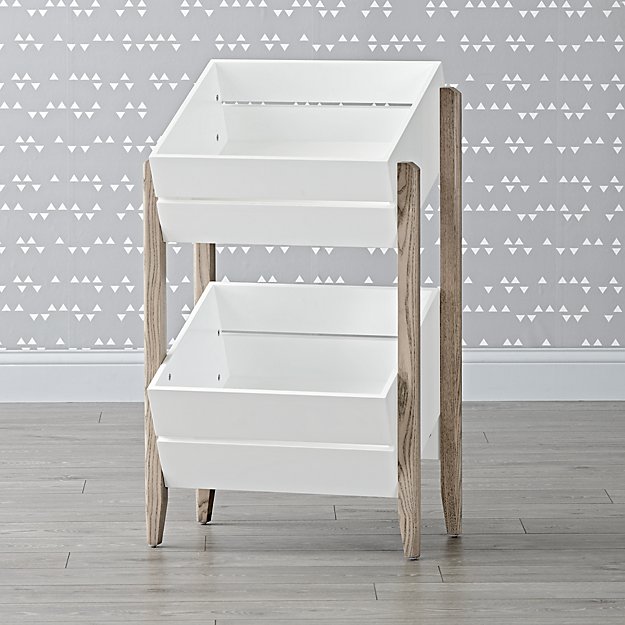 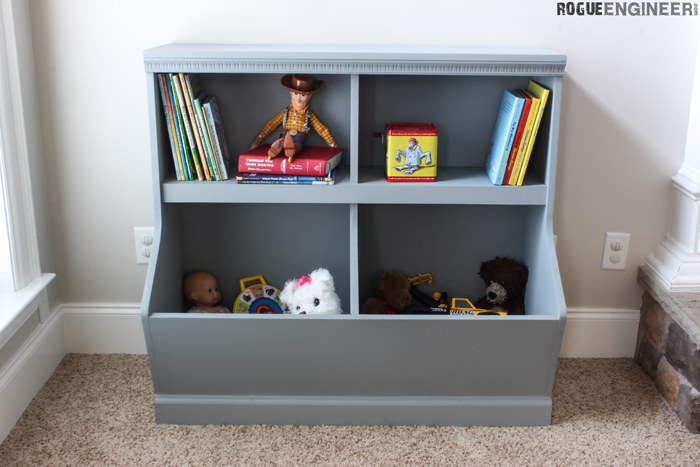 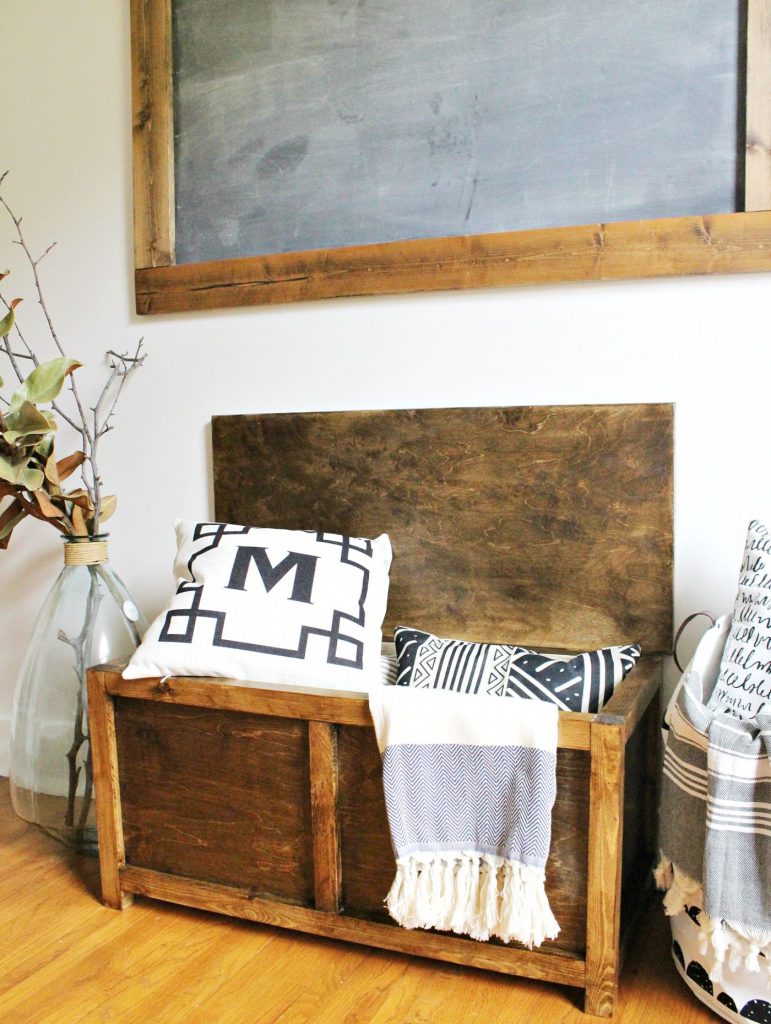 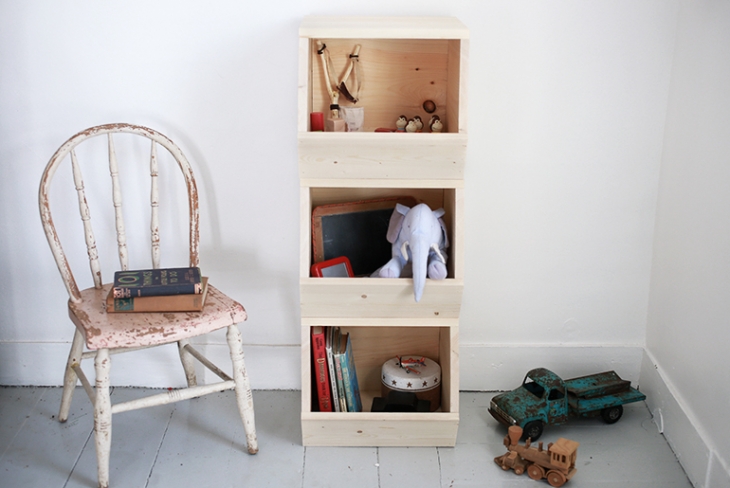 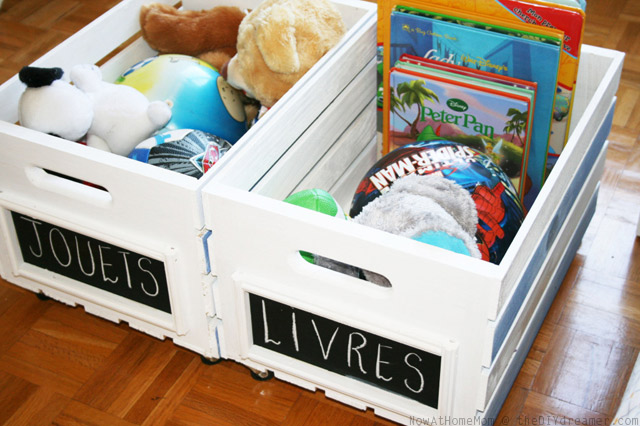 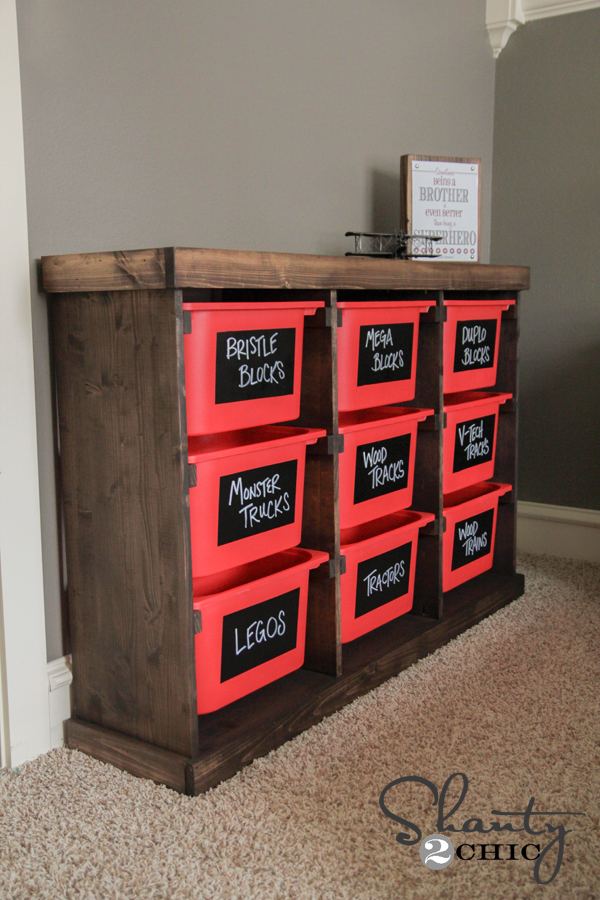 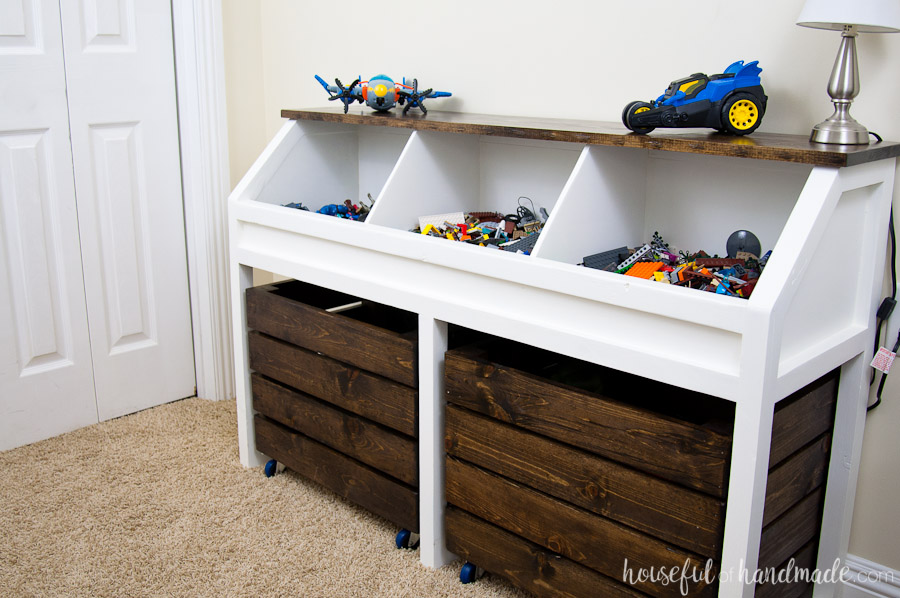 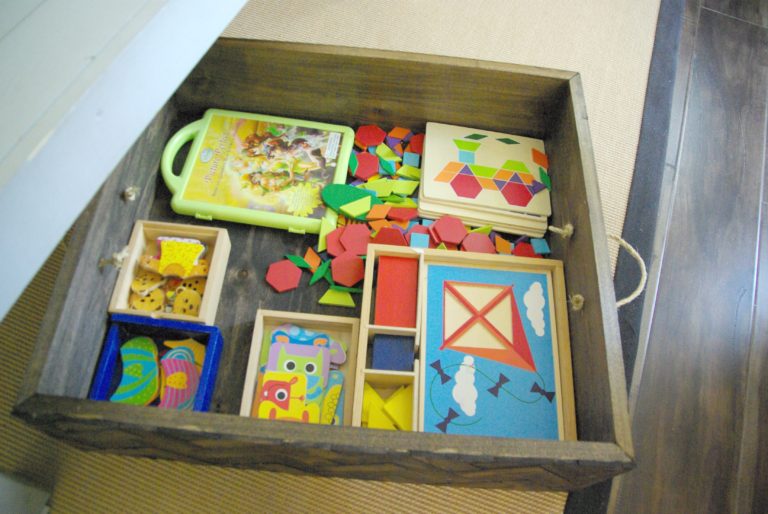 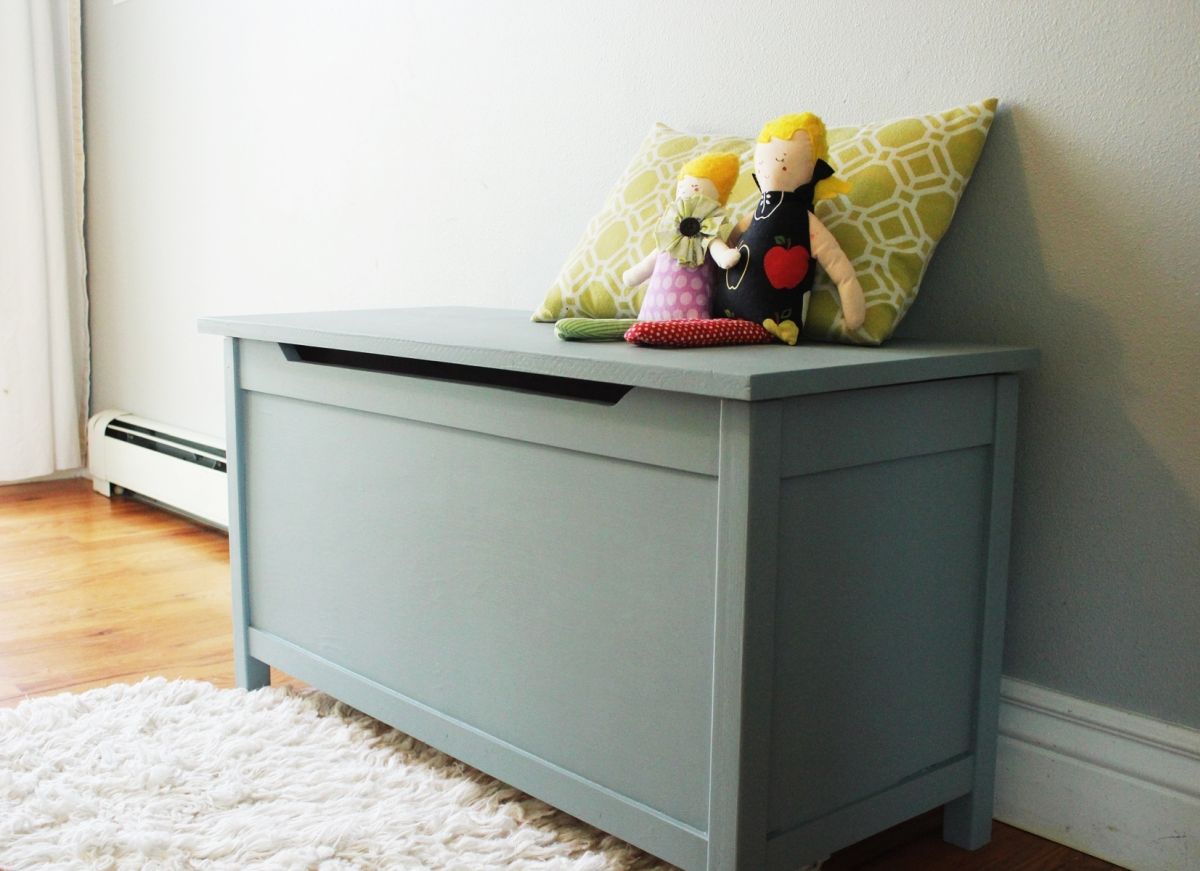 Tired of stepping on toys every time you enter your kid’s room? Maybe it’s time you built a toy box. We can’t guarantee it will keep the room neat but it’s definitely a step in the right direction. As it turns out, there are a lot of toy box plans and a lot of great tutorials which can help with that. There are also a lot more options to consider than just the plain old storage trunk or the basic box.

We’re not going to say that building a toy box is a piece of cake because it isn’t. It’s a DIY project of intermediate difficulty. The one we have in mind for this first example has a design that’s simple, a sort of hybrid between classic and modern. To build it you need plywood and lumber plus a few other elements like some screws, wood glue, a jigsaw, felt pads and some stain or paint. As you can see, this particular wooden toy box also has a lid and that allows it to also function as a console.

Storage boxes without lids are usually easier to build. Take this herringbone box for instance. It’s pretty much just a large tray, sort of like a drawer, with rope handles on the sides. It’s not tall and that allows it to easily fit under the bed or in other similar spaces and it’s roomy enough to store books, magazines, arts and crafts supplies or toys. The herringbone pattern on the outside of the box is a very interesting detail which gives this project a lot of style.

If you want something more than just a simple storage box, we have these nice plans for a toy storage console which may interest you. We found them on buildsomething. It’s a sort of chest with three open storage compartments at the top and two large rolling bins at the bottom. The whole system is really great for sorting toys or clothes. It’s user-friendly and practical which makes it a goof fit for the kids’ room or the playroom.

A cabinet or a storage system based on a series of individual compartments or containers can be really useful for toys, especially all those little things like Legos or cars. Check out these toy box plans that we found on shanty-2-chic. All those storage containers are removable and they’re each labeled. The chalkboard labels are both cool and practical. To built something like this you’d probably have to pick a set of containers first so you can model the frame based on their exact dimensions and form.

As it turns out a wooden crate can be a perfect toy storage box without necessarily requiring a makeover. Of course, a change of color is welcomed so let’s check out a tutorial for a crate on wheels which we found on thediydreamer. The idea here is to use paint to make a wooden box look more fun and attractive and to put casters on it so it can be rolled around with ease. The project also suggests that putting two small boxes together can be useful in creating a larger storage box for toys, books and other things kids like.

Instead of a short and wide storage box, another option is to build a vertical structure. The toy box plans featured on themerrythought show you how. The project requires some wood (in this case pine was used), a saw to cut the wood with, wood glue, nails, sandpaper, mending plates and a screwdriver. The unit looks really nice as it is, with no stain or paint on it but you can definitely customize it if you want.

Storage chests are really great and not just for toys but also for things like extra pillows or blankets. They have a mysterious appeal and an intrinsic rustic charm, even the modern ones. On woodshopdiaries you’ll find a tutorial that shows just how simple and rewarding building a storage chest can be. The project starts with the frame. Once you have this part taken care of, you can start adding the dividers, the sides and the bottom. The top is the last one to be installed.

Toy storage is a big deal, both for the kids and for their parents. It’s important to teach kids how to be organized and to show them how to store their things properly and for that you need appropriate furniture, like this bookcase-like structure for example. It’s something that we found on rogueengineer. Check out the plans and the instructions and start building your own version of this project.

You can find inspiration for your next DIY project in some of the existing furniture pieces. Check out this set of storage crates from landofnod. This definitely looks like an easy craft. You’d have to figure out the plans for this yourself. Consider repurposing two wooden crates and simply attaching them to four wooden legs, at an angle. You can paint them and even label them.

How cool are these storage crates? They’re not only great for storage but also really comfortable. They double as stools and they look lovely. They’re really easy to put together too. You can find the instructions on welcome-to-the-woods. The idea is simple: you take a sturdy storage crate and you give it a padded seat. You can use some foam from an old mattress and some fabric from old shirts. Paint each crate in a color that matches the seat.

There’s usually not a lot of space in a kid’s room, especially when there’s a ton of toys in there too. That’s why you have to be clever and to use whatever opening you can find. It’s usually practical to store things under the bed. For that, you can use a large drawer like the Ikea Pax. Install caster wheels on it so you can easily roll it under there and make some dividers too so the toys can stay organized. The idea comes from grillodesigns.

There’s also plenty of storage space under a window seat or inside a bench. In fact, you can add one of these features right now and take full advantage of everything it has to offer. The project goes beyond the basic toy box plans we discussed in the beginning so be sure to check out thriftyandchic. The idea proposed here involves a bunch of storage boxes neatly stored in plain sight.

Designing a playroom is a lot of fun until you have to come up with appropriate storage solutions. The cool thing about this, however, is that you can be creative and add storage in unexpected areas. For instance, you can design a wall unit with shelves, like a bookcase but with compartments big enough to hold a bunch of boxes or crates filled with toys. It’s going to look casual and it will be very practical for the kids. {found on blesserhouse}.

Speaking of crates, check out this cool storage unit made entirely out of wooden crates. It’s something that we found on maisondepax. The crates serve as storage modules not just for toys but also for books and other kid-related stuff. There’s no point is making the unit tall since it has to be accessible to the kids. It would be best to also secure the crates together to prevent accidents.

Finding room to store toys is not exactly difficult when you have a playroom. Things change when space is limited. While looking for cool toy box plans to share with you today, we also found this cool organization idea on makinghomebase. The solution offered here works for a variety of spaces, including the living room, hallway or even bedroom. What you see here is a sort of shelving unit/ console table with cubbies which can hold a lot of different things. The large toys and the books and stored stored directly on the shelves and the small items are kept in boxes.