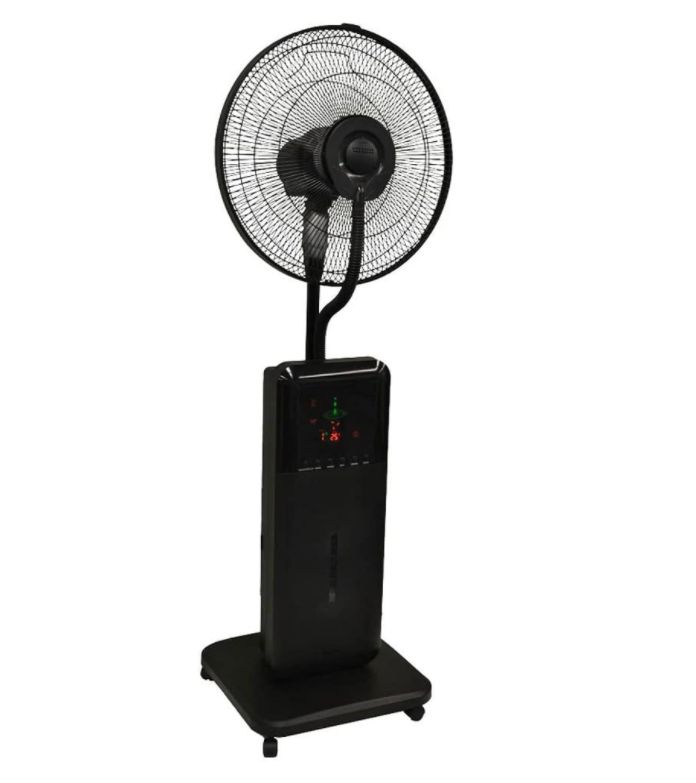 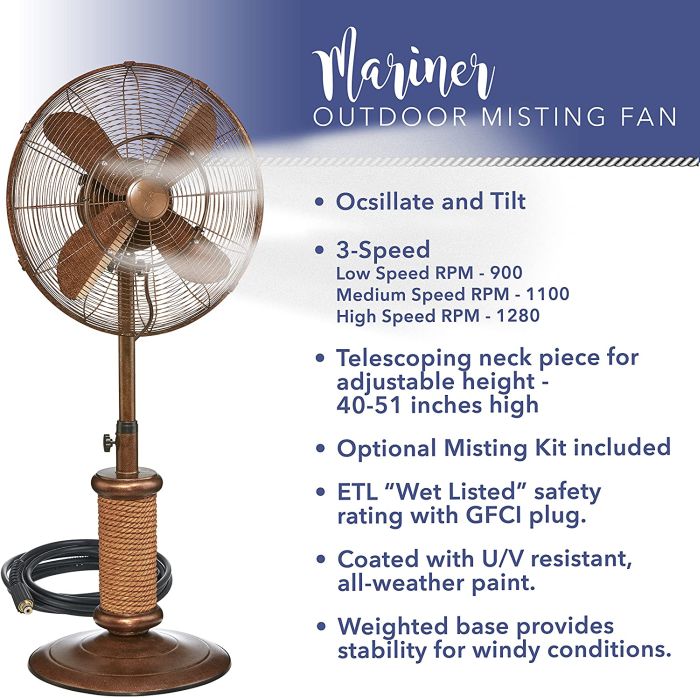 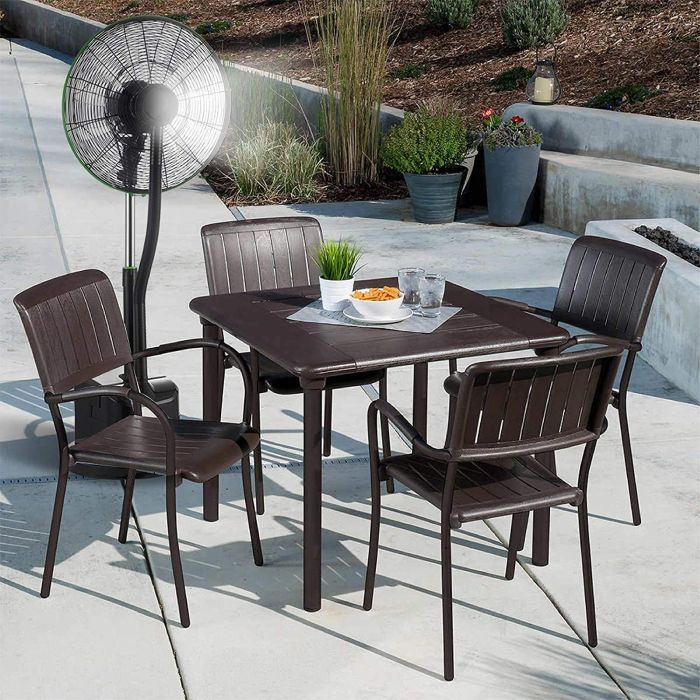 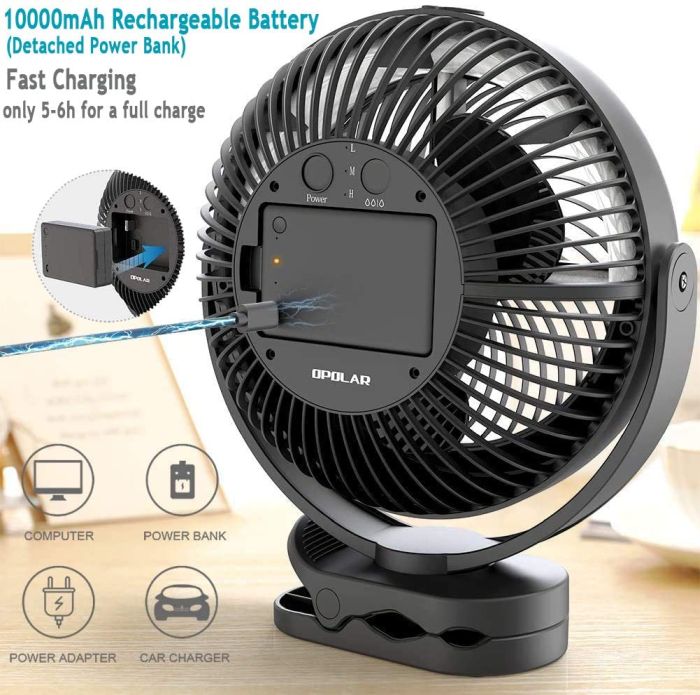 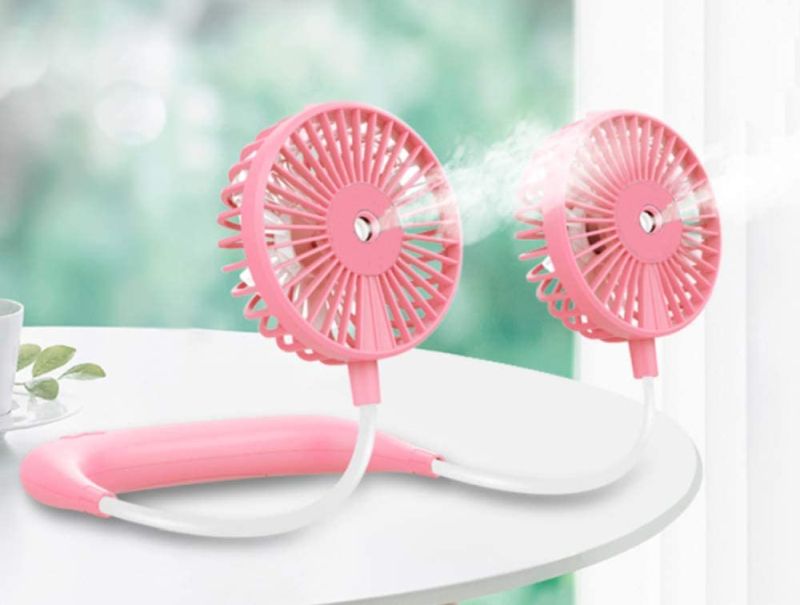 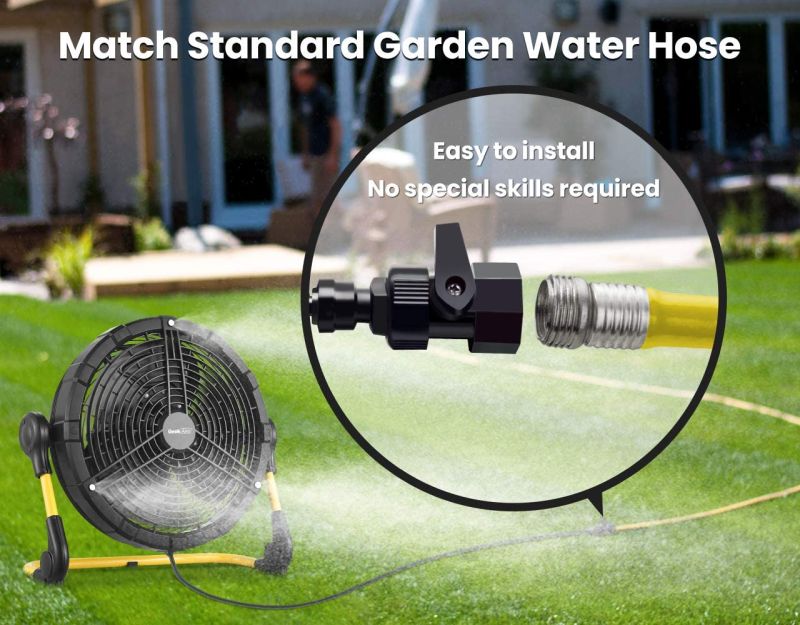 Have you ever wanted to spend some time outdoors but felt that the heat was unbearable even when you were resting under the shade? Then you probably need a misting fan. Fulfilling pretty much the same tasks as a regular fan, but using a different method to cool you down, a portable misting fan might be just what you need. 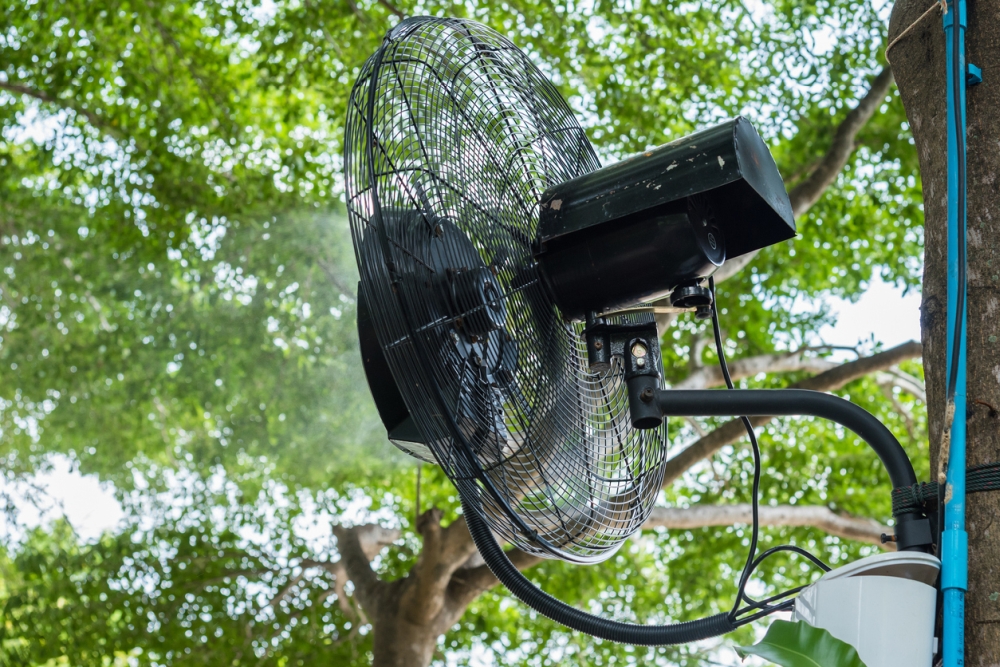 There’s a lot of rumor going around about the efficiency of these products, as people aren’t really sure what misting fans can do. Today, we’re going to shed some light on that situation and let you know more about what these products are, what they can do for you, and then review a few products that we feel are well worth the money.

“These fans have a durable, rugged design and can go anywhere. My top pick for portable, reliable fans!” (Customer review)

With its beautiful art deco-inspired design and the possibility to connect a hose and convert it into a misting fan, the oscillating model by Dynamic Collections is certainly a product worth considering.

“The fan is powerful, the mist is so fine you don’t have a wet feeling but it definitely cools your body up to about 8 feet away.” (Customer review)

A regular fan uses electricity to get a set of propellers moving and give you a breeze of air to cool you down. A misting fan, on the other hand, has a water reservoir and converts this water into fine mist droplets that land on your skin to refresh you. Mostly designed for outdoor use, misting fans offer the same cooling sensation that you get when you get out of the pool, but without leaving you soaking wet.

Some people believe that misting fans are really efficient, so let’s talk about how they actually work. Through the process of evaporation, the fine water droplets that land on your skin will draw heat away from the body as they evaporate. They can also cool the air as the droplets dry up from the surfaces around you.

Misting fans are believed to be able to lower the air temperature by 15 to 40 degrees Fahrenheit, which is pretty impressive considering how skeptical some people are about this type of product’s efficiency.

How to Choose a Misting Fan

There are a few things you should know prior to choosing a misting fan, and here’s the information that you’ll be in need of:

The CZ500 is a misting fan that combines top-notch technology with a design that resembles just about any regular misting fan on the market. In fact, it wouldn’t really impress you much at first sight, but the features make it well worth the money. It is designed with a polyester cover that’s prone to resist wear and tear, especially cracking and fading, which are common problems that might occur in outdoor exposure situations. It has an oscillating feature and three different fan speeds to choose from. There are four wheels to make it mobile, so you can move it around the patio as you please. It comes with a remote control that grants access to the features of the fan even from a distance. Other features of interest include mosquito repellent function and Bluetooth technology.

This cooling fan is designed to look like a regular art deco fan, which means it can be used indoors, as well as outside. It has weather-resistant paint and can withstand prolonged sun exposure without any cracks or warping. The weighted base will ensure the unit’s stability even on days when wind blows hard and has a tendency of knocking things over.

It comes with an additional misting kit that allows you to attach your garden hose to the fan and activate the misting feature, allowing the nozzles to spray a fine mist around the fan. You can adjust the height from 40 to a maximum of 51 inches. There are three speeds to choose from, with the highest setting offering 1,280 rotations per minute.

The Simple Deluxe misting fan is another product that’s worth every penny considering the wide array of features it offers for a really good price. It comes with six different speed settings, and the highest one operates at 5,964 CFM. It comes with an integrated timer that turns the unit off automatically at an interval between one and nine hours.

The different modes are available at the push of a button, allowing you to choose from settings such as fell-mode (creating a natural wind ambiance) or sleep mode (designed for night-time use). The water tank can hold water for an output of five to eight hours (this depends on the mode chosen). The misting volume can be controlled and you have nine different spray levels to choose from.

Our next suggestion is a compact and portable fan that you can easily take with you when going on a picnic, when you’re out camping, tailgating, or when you need a fan in areas of the yard where you don’t have a power outlet available. The battery life itself is pretty generous, promising a runtime of up to eight hours on a full charge, depending on the settings activated.

The battery is detachable and it comes with a micro USB charging cable that allows for fast charging. The fan also comes with a clip that allows the fan to attach to surfaces of a maximum two inches in thickness. You can select between two mist output modes and choose between three different speeds.

Did you know there is such a thing as a wearable misting fan? This is basically what the NCC misting fan does, it offers cooling through a device that you can hang around the neck and enjoy a cool breeze and fine mist even as you’re walking down the street. It comes with two different misting options and you can also turn the mist feature off completely.

There are three speed levels to choose from and you can select the speed by pressing the power button. Each press will increase the speed of the fans even further. It comes with 360-degrees adjustment and the battery power can provide juice for up to eight hours on the lowest speed setting.

Another battery-powered misting fan is this one by Geek Aire. It is equipped with three nozzles that release a fine mist at a distance of up to 11.5 feet. The unit is made from strong ABS and promises to deliver a waterproof and rust-resistant product with a pretty generous battery life. Since the battery is detachable, you can choose to purchase additional units and, as they’re all charged, swap them so that you can get continuous use out of your unit. The 1,500 CFM airflow is always reliable, as this compact and lightweight fan offers 360-degrees rotation to make any summer day a lot more bearable.

Yes, they do, provided that you actually buy a model that’s decent. They eliminate water droplets in the form of a fine mist that evaporates from your skin, taking some of those extra degrees along with it. It works together with its air cooling feature and can drop the temperature of your surrounding environment with a considerable number of degrees, allowing you to cool down even on hot summer days when all you want to do is enjoy some time outdoors.

Are misters worth it?

For people that want to spend more time outdoors when temperatures seem ruthless and all they want to do is go back inside and turn on the air conditioner, misting fans can be wonderful companions.

Where do you place a misting fan?

Misting fans are designed to be placed outdoors, with some models being suitable for indoor use as well (provided they allow you to turn off the misting feature). They can be freestanding products or wall/ceiling-mounted units.

Does Home Depot have misting fans?

Yes, Home Depot sells a wide range of misting fans, all of which are available on their site.

Even with the start of summer, which usually gives us a good excuse to spend more time outdoors, temperatures can sometimes be so overwhelming that you just want to spend time inside, close to your air conditioning unit. Misting fans are great for bringing more cooling options outdoors, where regular fans are simply not recommended. Today’s guide was focused on showing you why misting fans are a viable option in spite of the critique they receive, but also to teach you what are the features to pay attention to as you’re considering this new purchase.