Plywood is a very popular material commonly used in the interior design and furniture industry. It’s made from thin layers of wood veneers which are glued together. It’s from the same family as MDF (plywood) and particle board. Although it’s considered a modern invention, there’s evidence showing plywood has been around for a long time, with reports dating back to the 17th and 18th centuries and even before that.

The first patent for what is now commonly known as plywood was issues on the 26th of December 1865 to John K. Mayo from New York City. However, it doesn’t seem like it was of much use. It was only in 1905 that someone from Portland started creating furniture and other things from a material which they called 3-ply veneer work. Plywood became more and more popular after that, with new uses for it being found and improvements being made to the manufacturing process.

Today, plywood has many different applications and comes in a variety of different types, the most common of them being softwood plywood which is usually made of fir veneer. Hardwood plywood is commonly used for furniture making and is made of ash, oak, red oak, birch, maple and mahogany. Marine plywood is used in the construction of boats and goes through a special treatment which makes it suitable for high-moisture environments as well as rot-resistant. These are just a few examples.

Plywood has a lot of advantages but also a few important disadvantages which we should mention. For example, it has very good strength and durability compared to MDF and is also less susceptible to water damage. It’s resistant to cracking, twisting, warping and shrinking and can be easily polished or painted which makes it very versatile. Compared to solid wood it comes in a variety of large sizes and is more affordable. It requires very little maintenance and is also easy to clean.

For all the pros mentioned above there’s also a list of cons to consider. For example, even if plywood is more affordable than solid wood, it’s still more expensive than MDF or particle board. Also, its edges need to be finished and often get splintered or damaged during transportation. It can be cut into basically any shape but the process is quite difficult. At the same time it can be damaged by moisture and is known to emit toxic VOCs. At the end of the day, it’s up to you to decide whether plywood is a suitable option for your projects and if it’s in fact the best option you have considering your budget and requirements.

To get a better idea of just how versatile plywood can be, we’ve selected a few projects which make use of this material. A good example is the interior design of this flat from Milan designed by studioWOK. Since this is a tiny apartment with a total surface area of 28 square meters, the designers had to be creative and to find a way to make it super functional while maintaining an airy vibe. Plywood turned out to be the perfect material for what they had in mind. They created these plywood boxes that concentrate all the furniture on the walls and can hide or reveal various elements as needed.

The Plywood House designed by SMS Arquitectos in Palma de Mallorca is even more impressive. It’s an extension created for an existing house, a project which explorer all the different possibilities of local manufacturing of plywood elements. This material has been used extensively throughout the project in a lot of different ways, not just for furniture but also to cover up walls, ceilings and for doors, staircases and so on.

This bright and airy loft is located in Ghent, Belgium. It’s situated in an old warehouse which had been converted into apartments and the restrictions for furnishing the place were quite strict. The owners worked with studio dmvA to find a suitable plan for the loft’s new interior design. They made use of plywood sheets to create extensive structures throughout the apartment which incorporate not just furniture but also the staircase, lighting and other features.

Here’s another cool home, this time located in Taupiri, New Zealand. It was designed by Edwards White Architects and it has wonderful views towards the Waikato River. Inside, the designers chose plywood as one of the main materials for the custom furniture. They created sleek built-in units which add warmth to the spaces without cluttering them.

The Lantern Studio is a cozy little retreat designed by architecture and design studio Surman Weston. It’s located on London and serves as a space for working, relaxing and entertaining. In has a glazed facade which transforms it into a glowing lantern at night, hence the name. On the inside, the entire space is wrapped in plywood sheets which gives it a very warm and inviting look.

Located in Brazil, this little chalet is a project completed by studio Silvia Acar Arquitetura in 2018. It sits among forest and has been elevated from the ground in order to give the impression of sitting among the treetops. It’s small and consists of a single room. On the outside, the chalet features a metal frame while on the inside it’s coated in plywood sheets which have been lightly painted white.

The Monochrome House is another really cool project, one which was completed in 2017 by studio Lookofsky Architecture. It’s meant to serve a holiday home and it’s compact and simple. In order to keep the cost of the project low, the architects used low-budget materials such as concrete and plywood. This gives the house a modest and pure vibe. The exterior has been painted red while the interior remained raw and simple.

A couple of years ago architecture studio NADAAA worked on the extension and renovation of a 1920s residence located in Washington. They kept a lot of the existing exterior design of the building and focused mainly on giving the interior an update. Some elements such as the partition walls, the staircase railings and some furniture were made out of laminated plywood sheets. It looks really nice in combination with the white walls and wooden floors.

Plywood is also the material chosen by Interface Studio Architects when they worked on a townhouse located in Kensington, Philadelphia.It was built between two existing house and has a simple white exterior which distinguishes it from its neighbors which have brick and vinyl facades.  The centerpiece of this townhouse is a plywood section which runs through its core on all three floors. it contains the staircase among other features.

We also want to show you this really cool loft in London which was recently extended by studio Widger Architecture. The extension houses two bedrooms which can also serve as study/ office spaces. The flat is situated on the first floor of a building in Walthamstow and the extension occupies the attic. The new bedrooms are lined almost entirely with birch plywood. This material was used to cover the walls, ceilings and also to create built-in furniture, giving the rooms a very basic and simple look but also making them feel very cozy and welcoming at the same time. 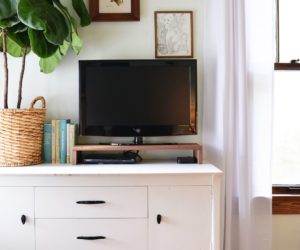