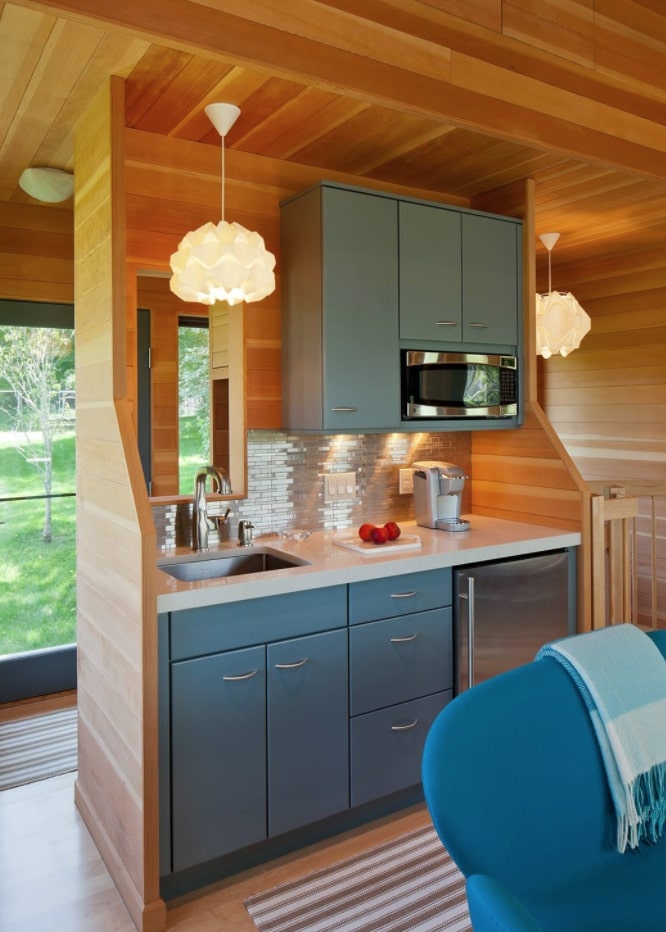 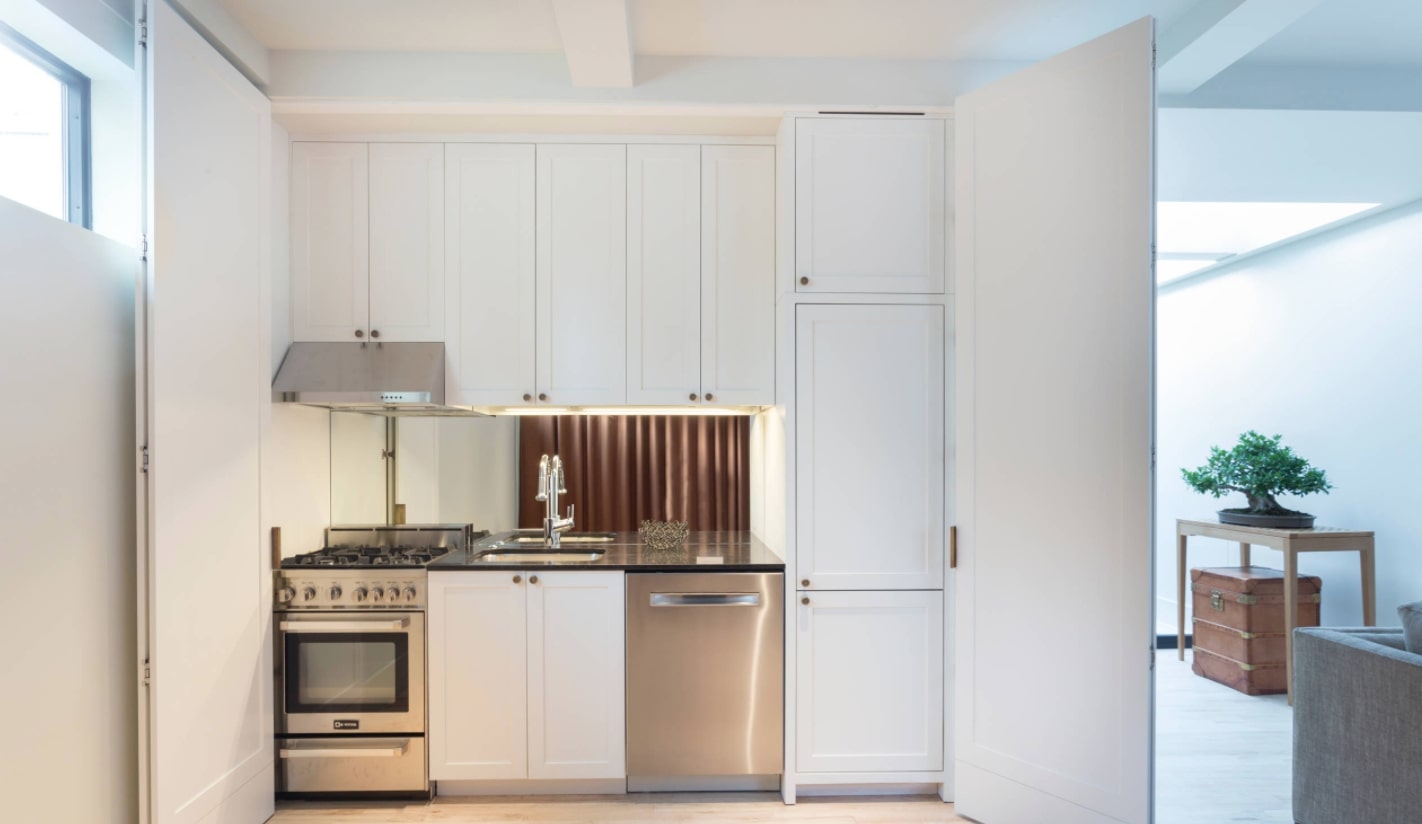 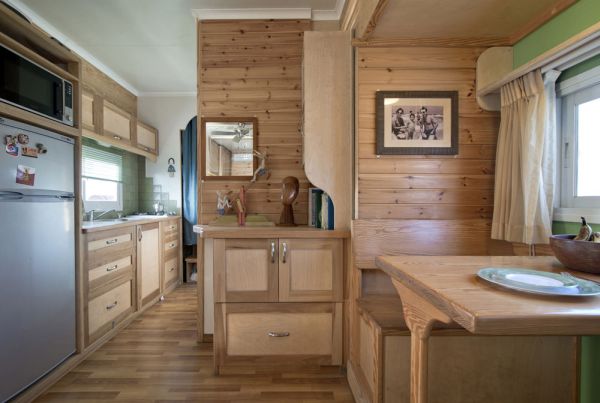 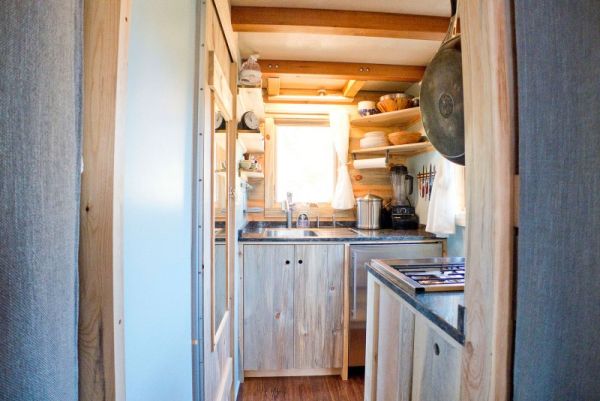 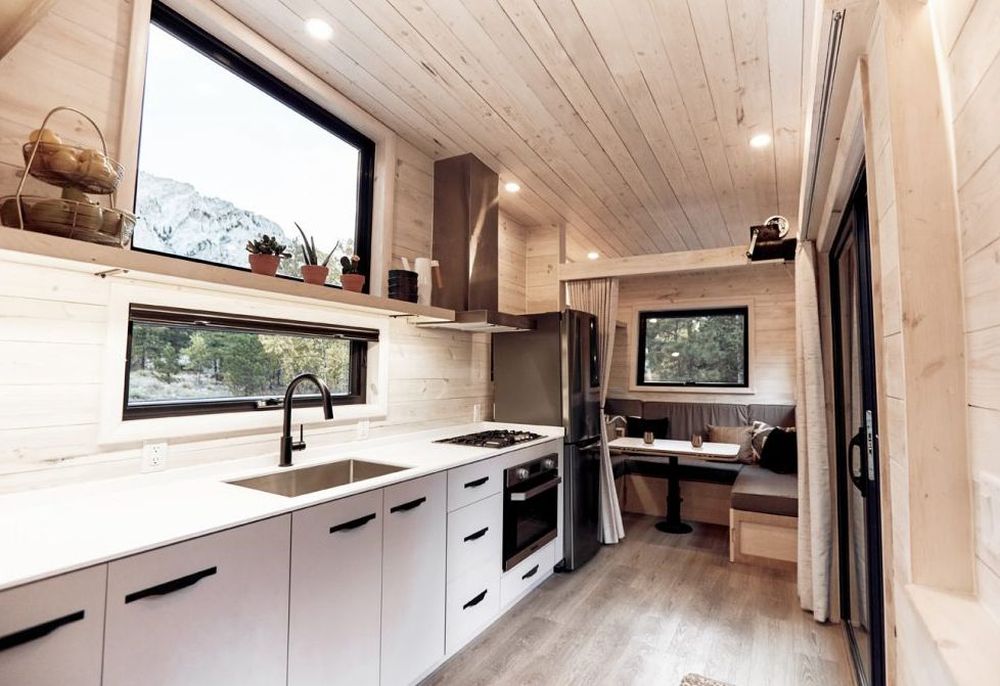 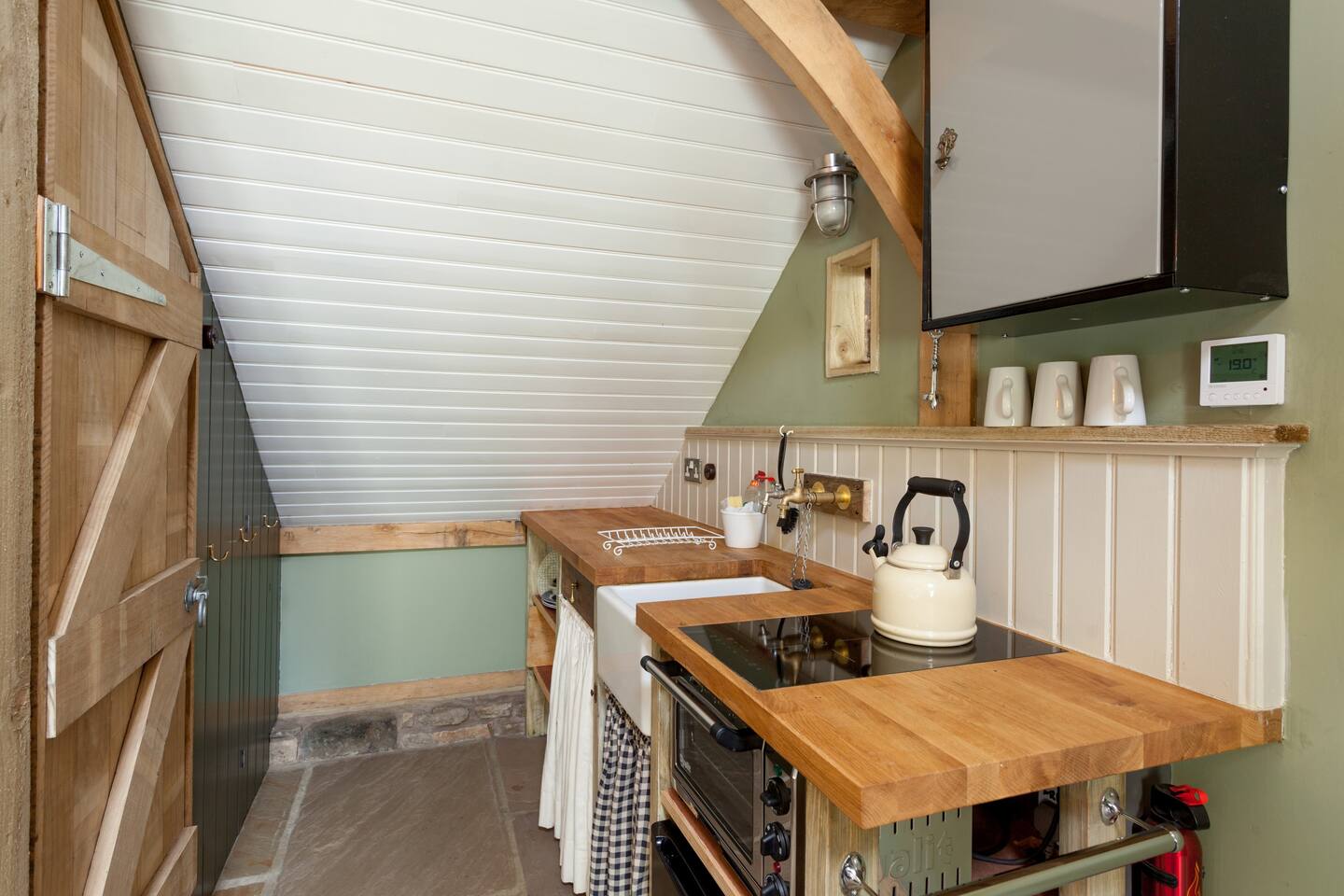 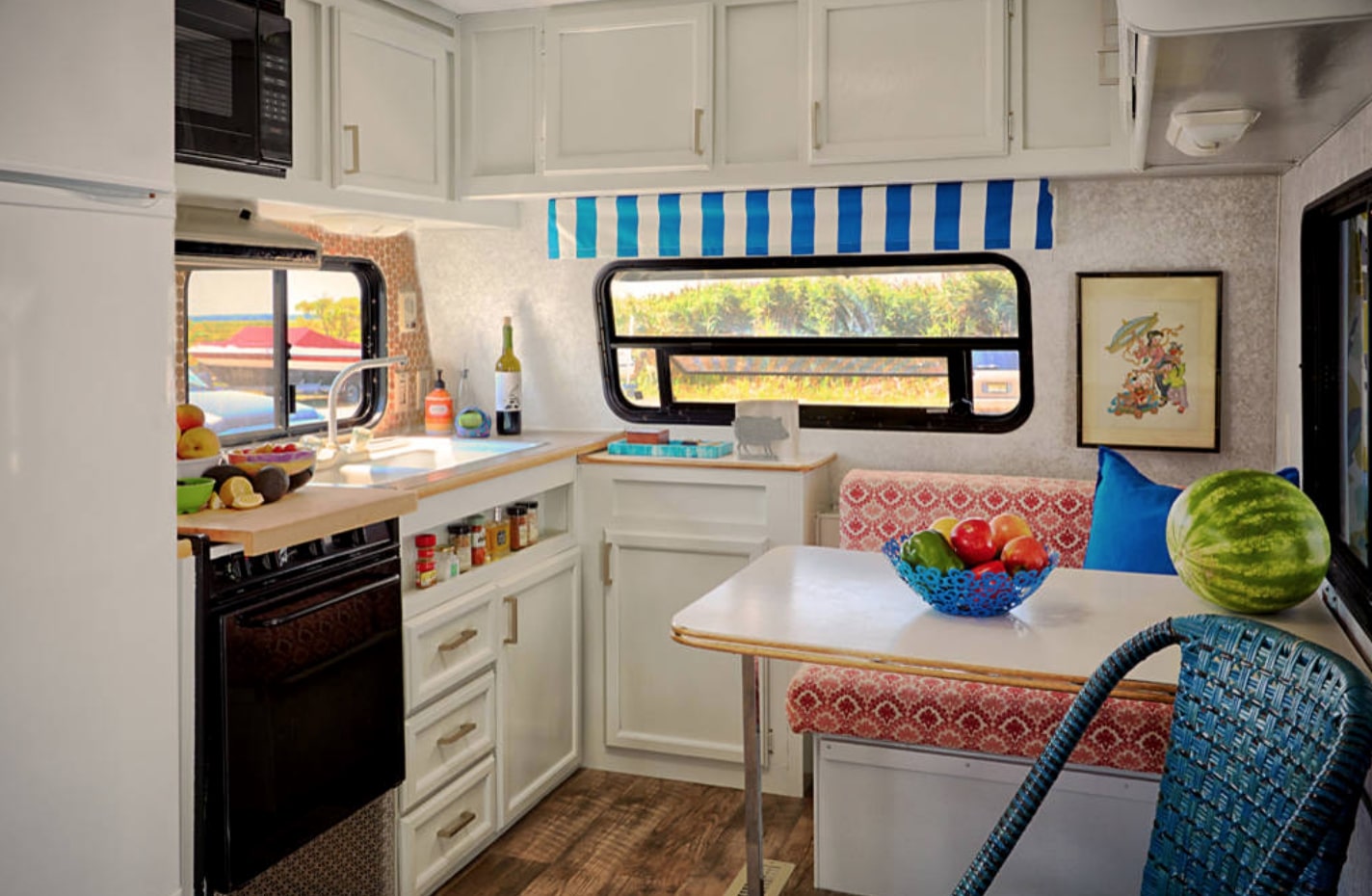 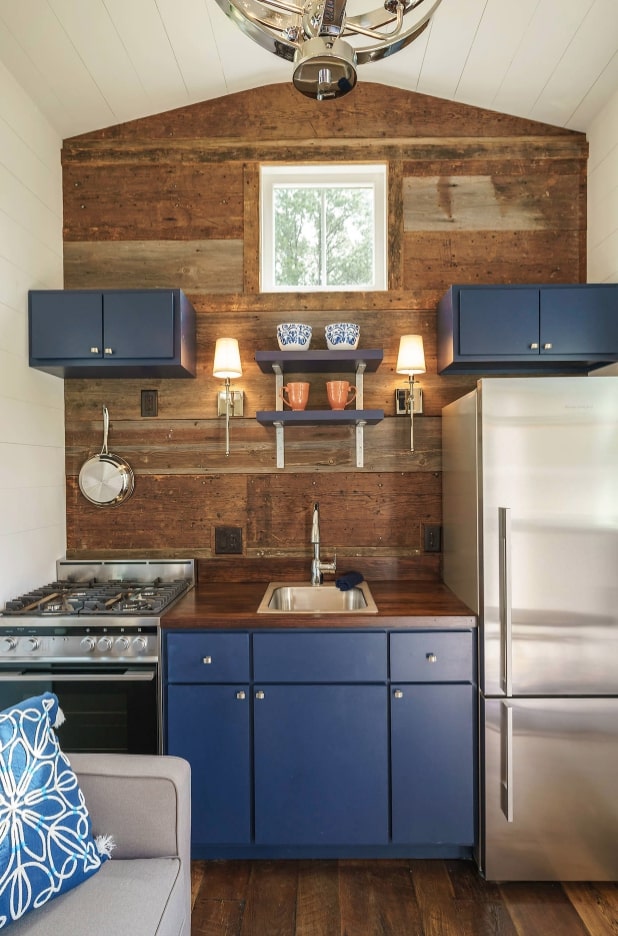 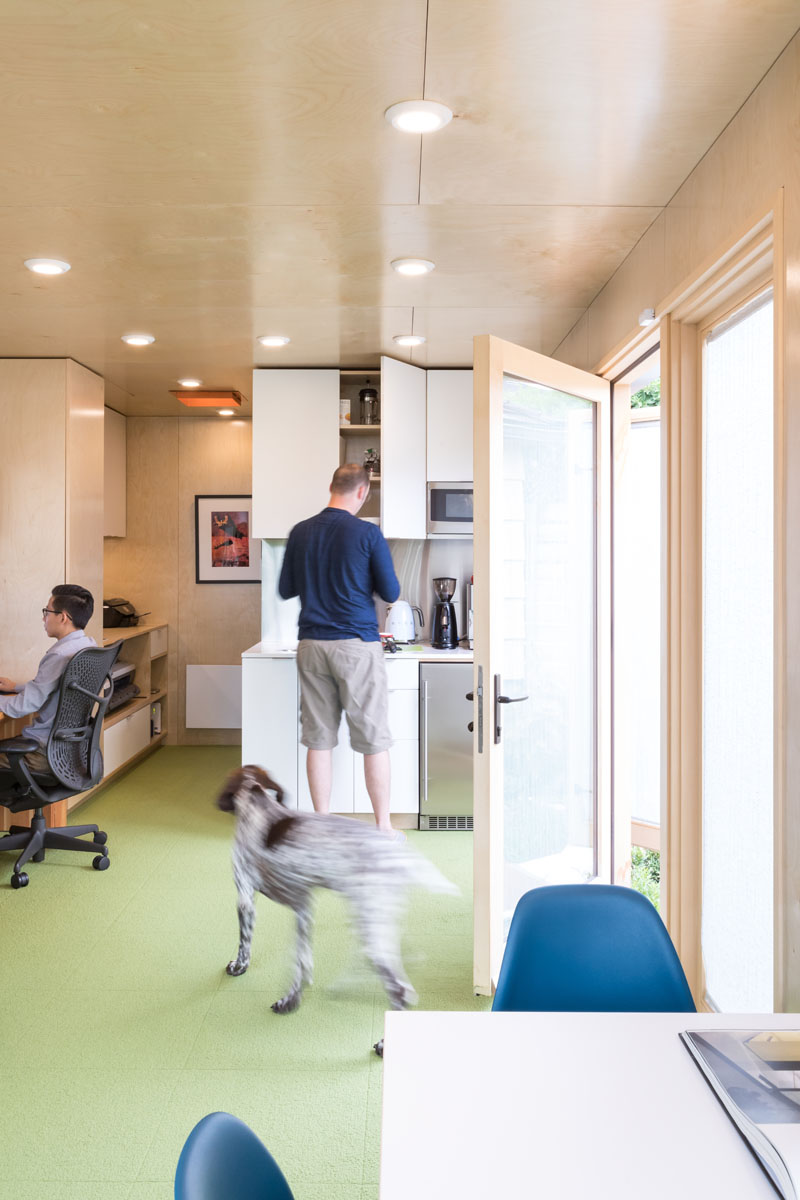 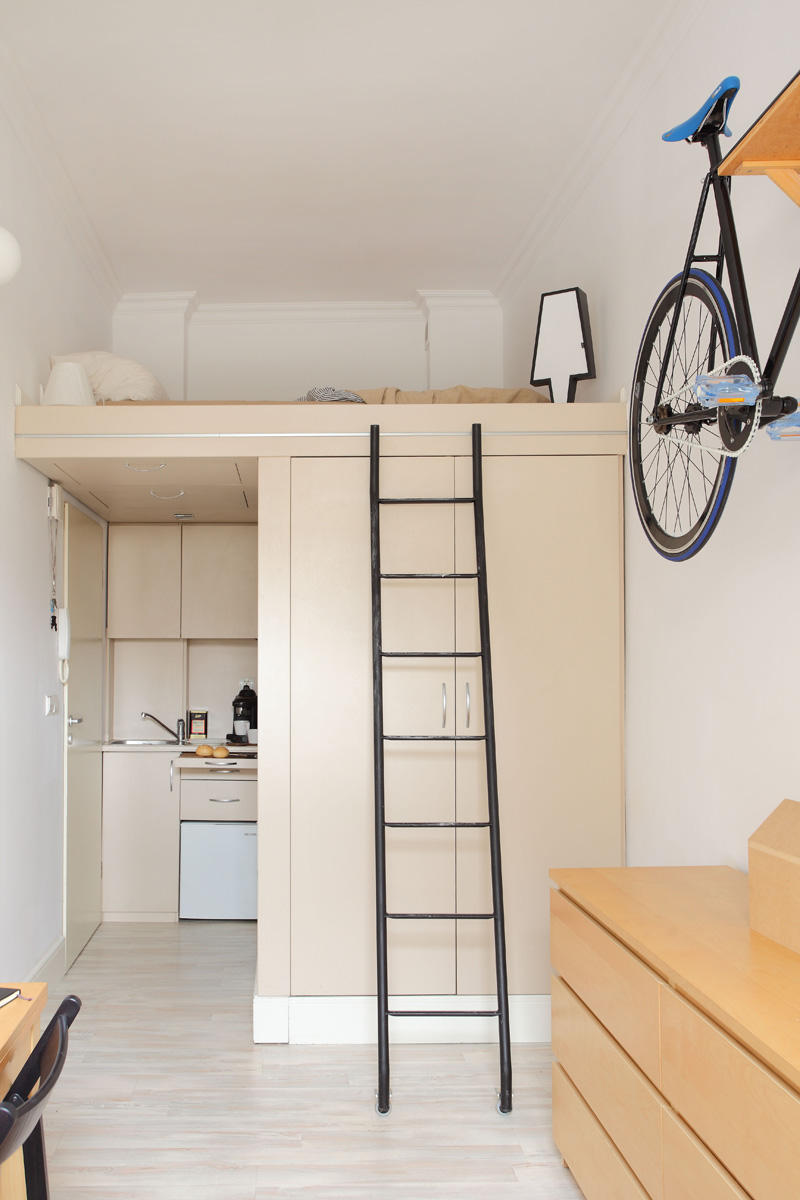 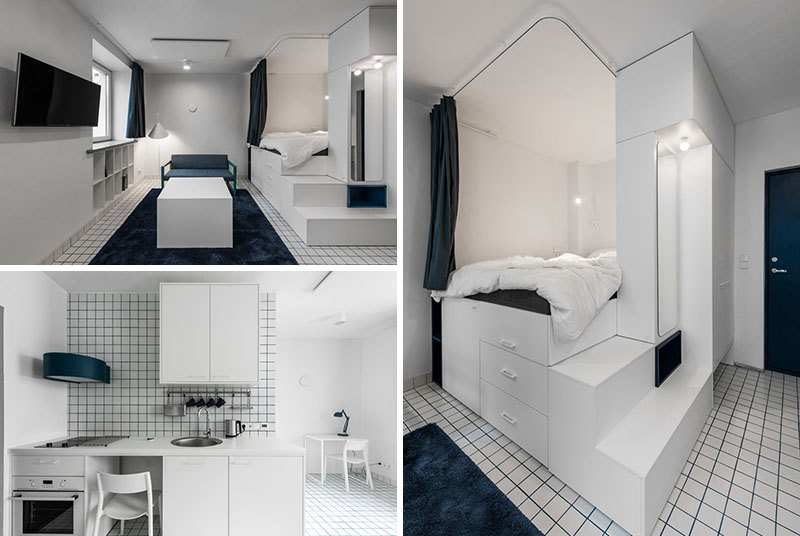 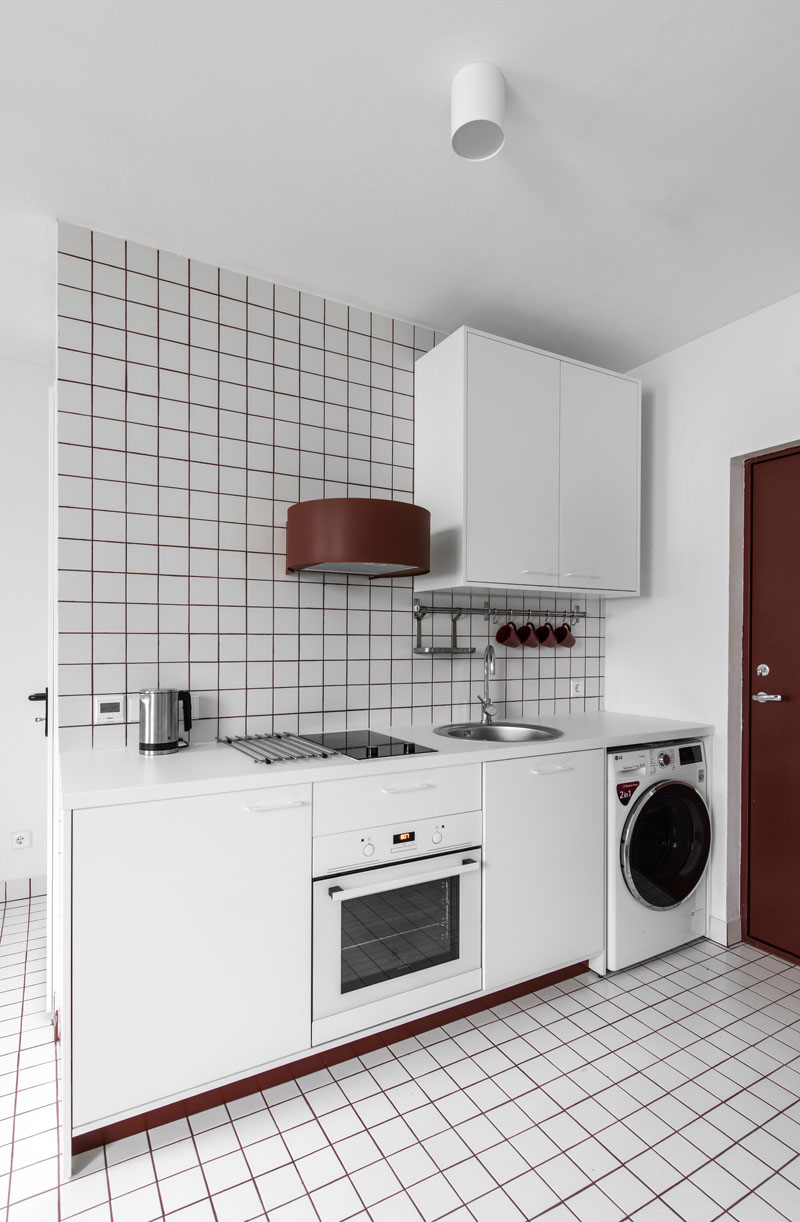 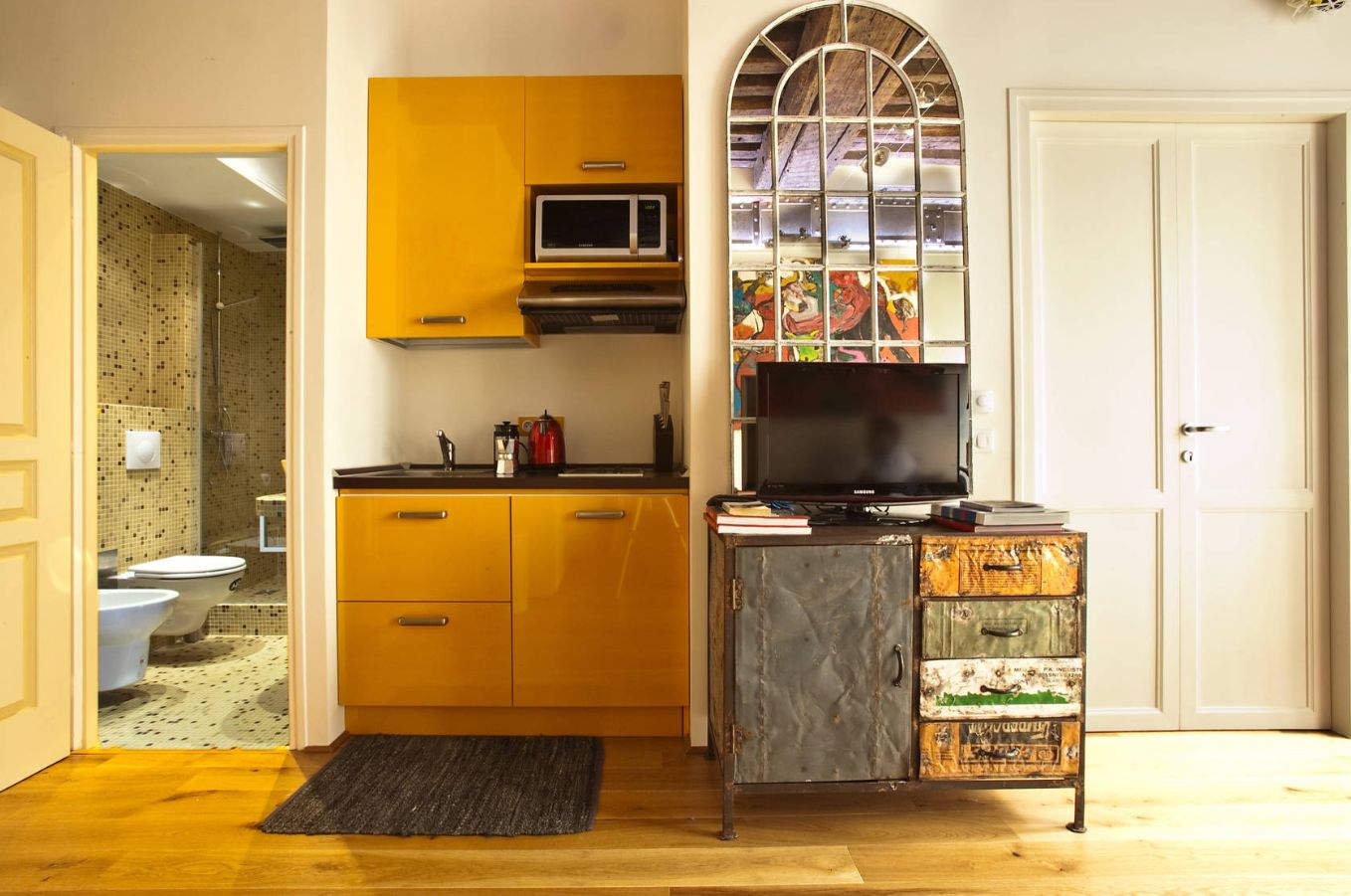 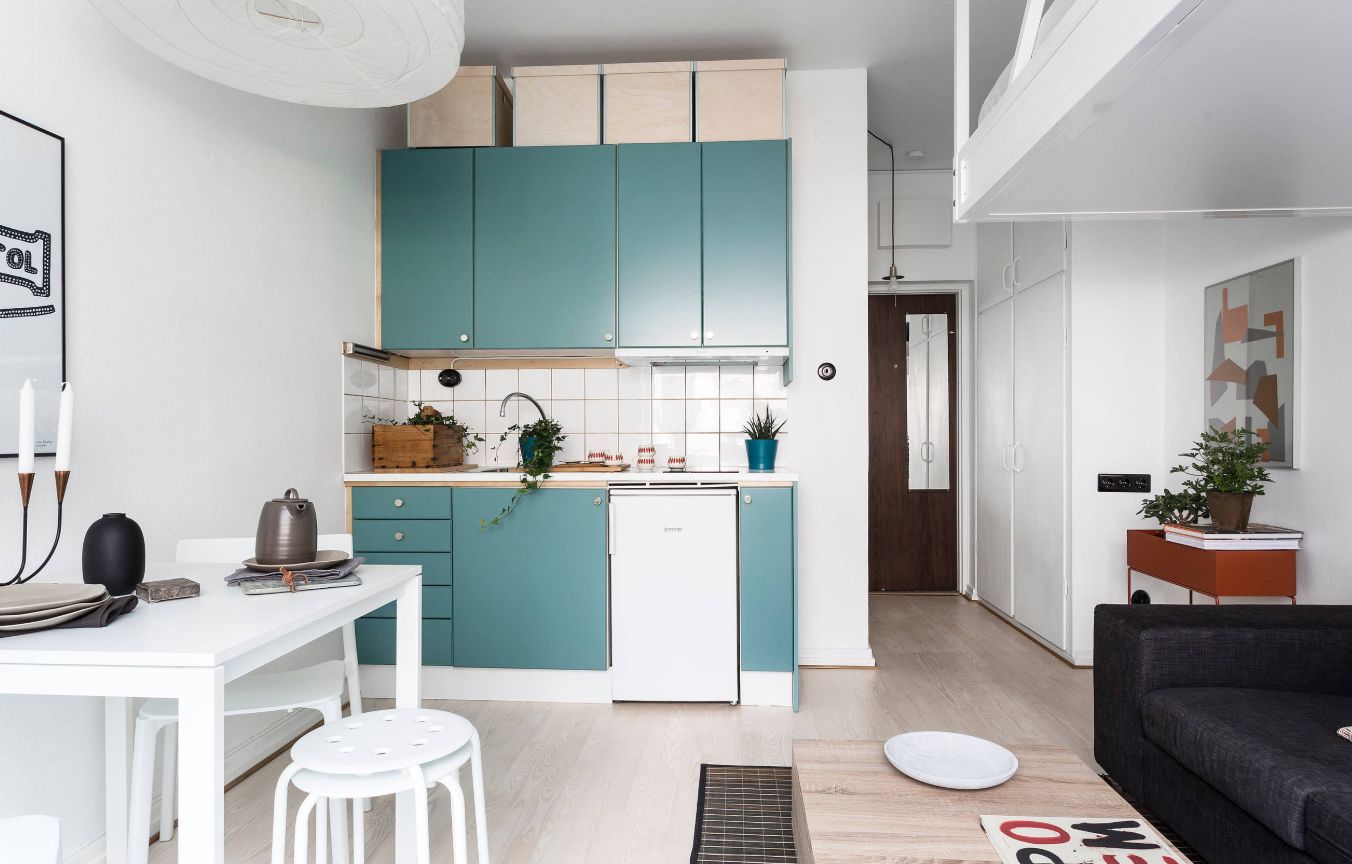 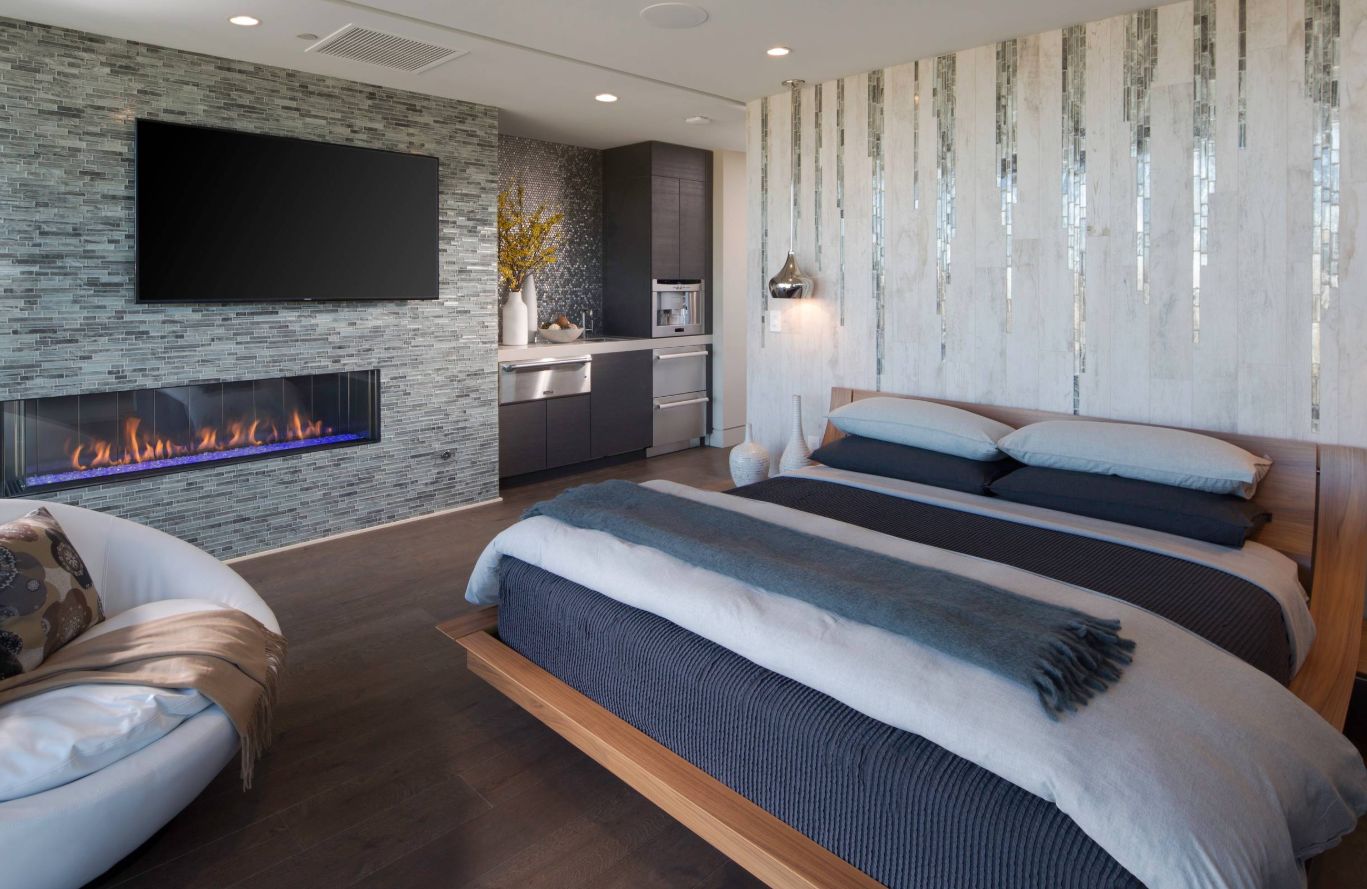 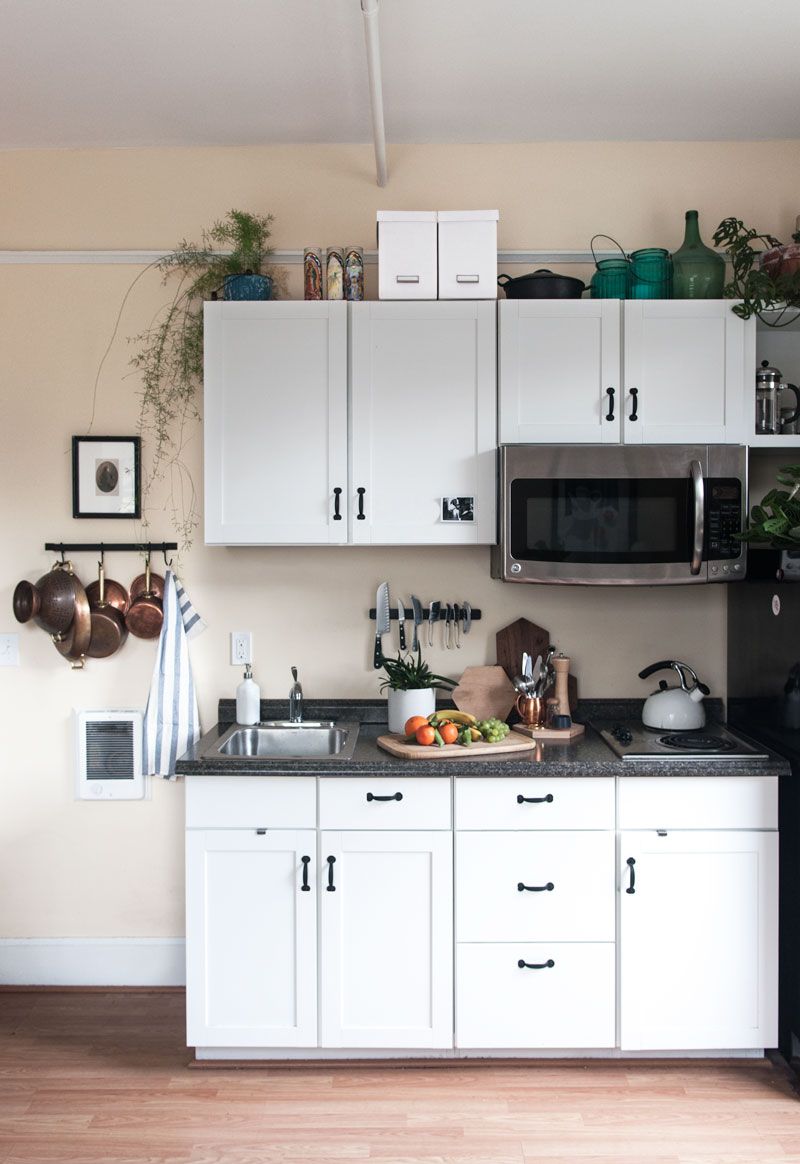 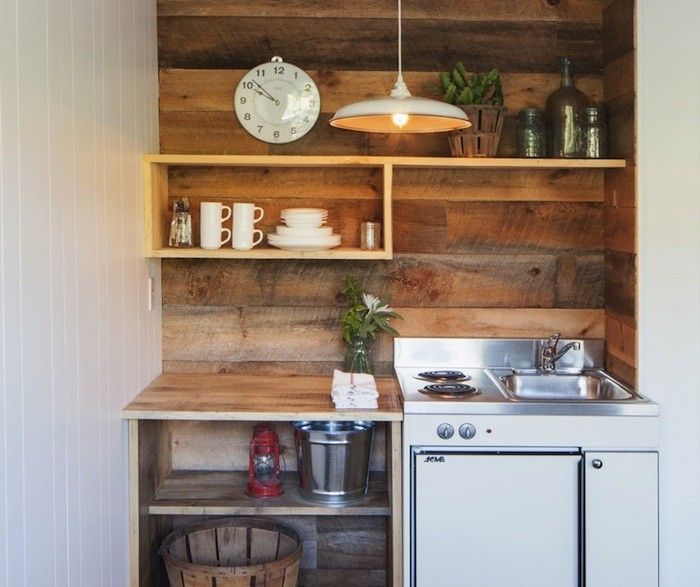 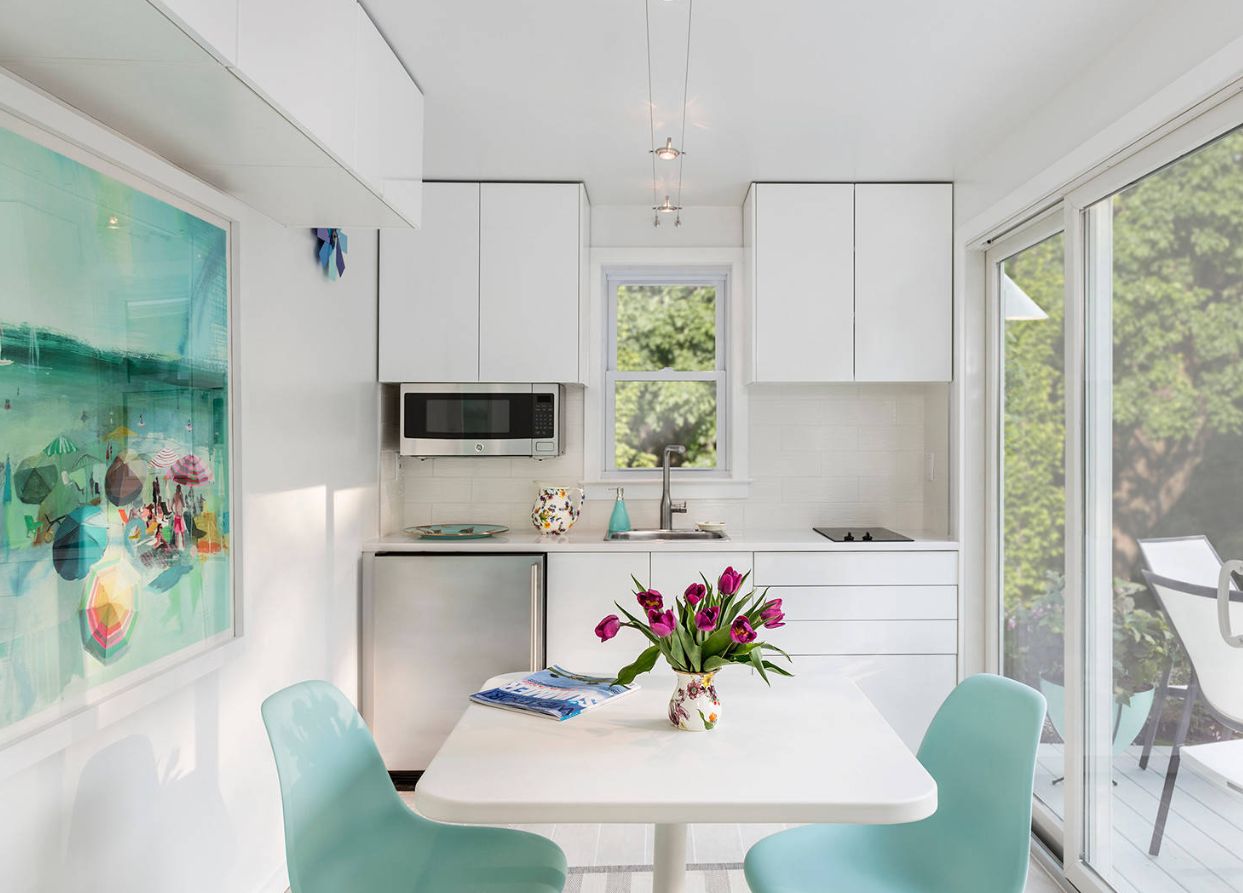 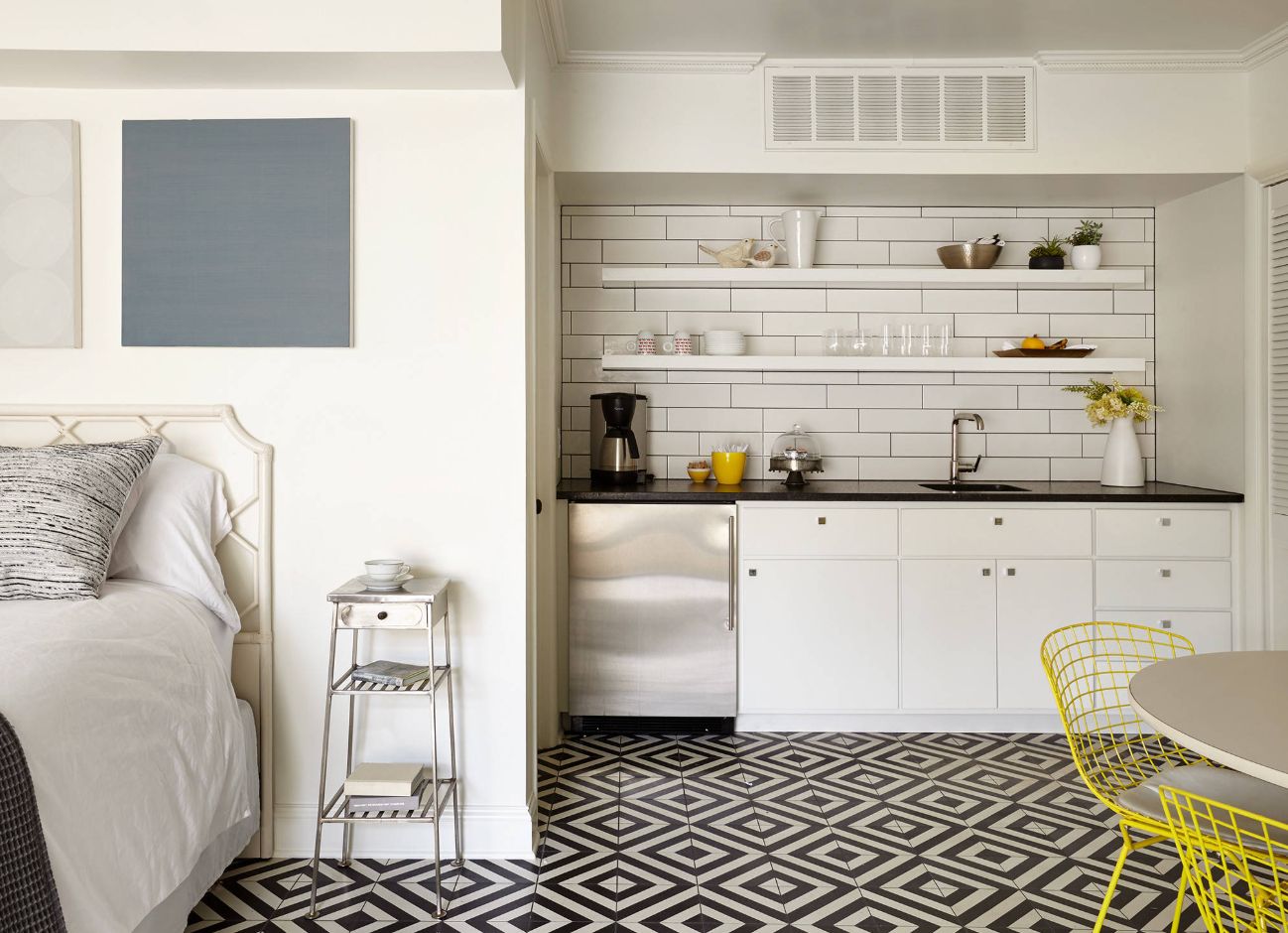 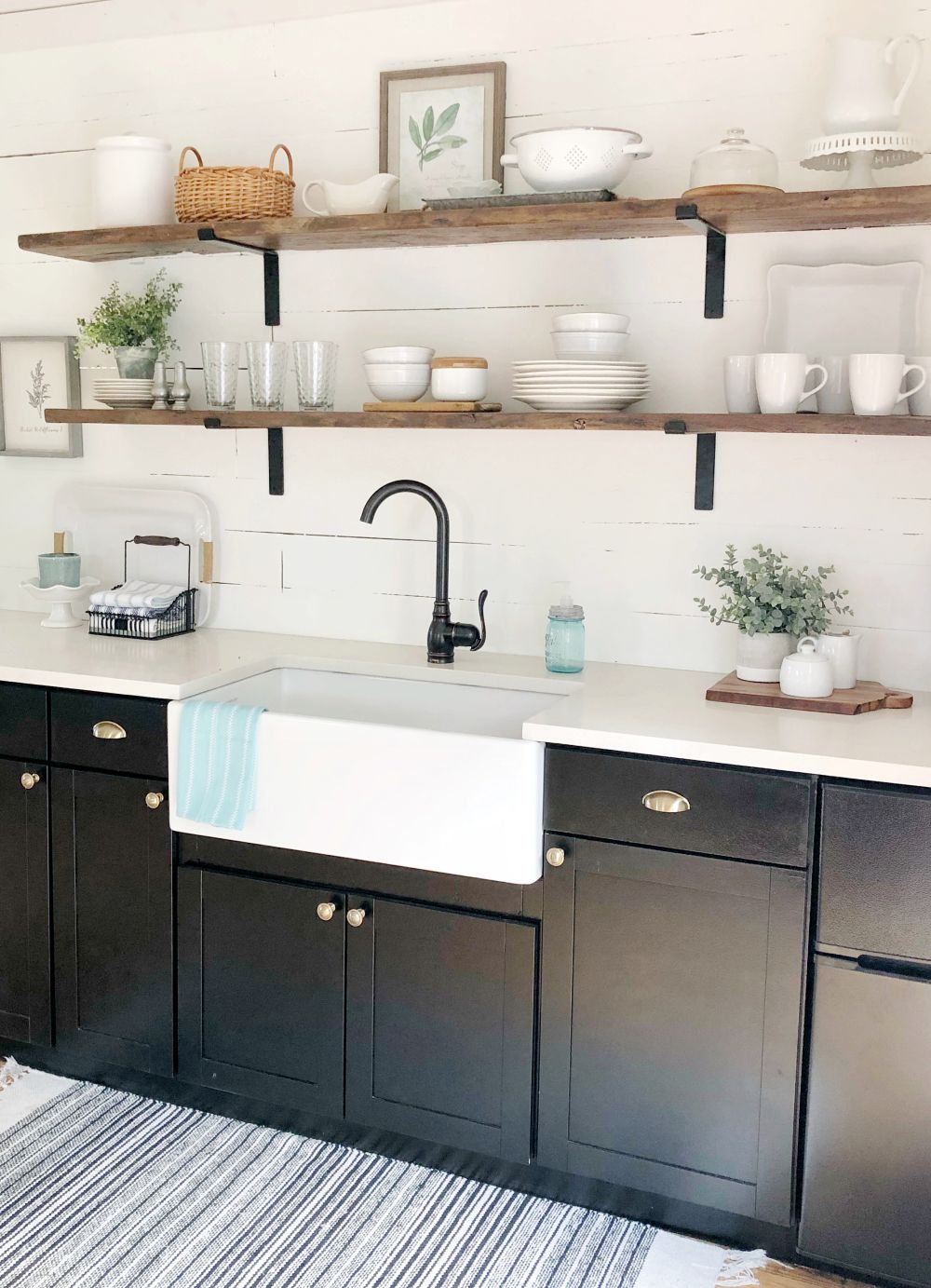 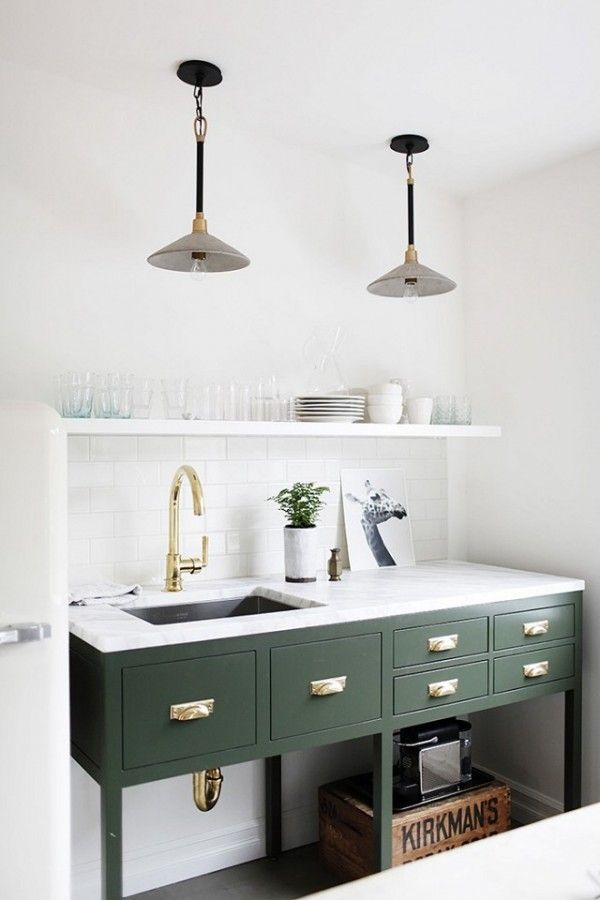 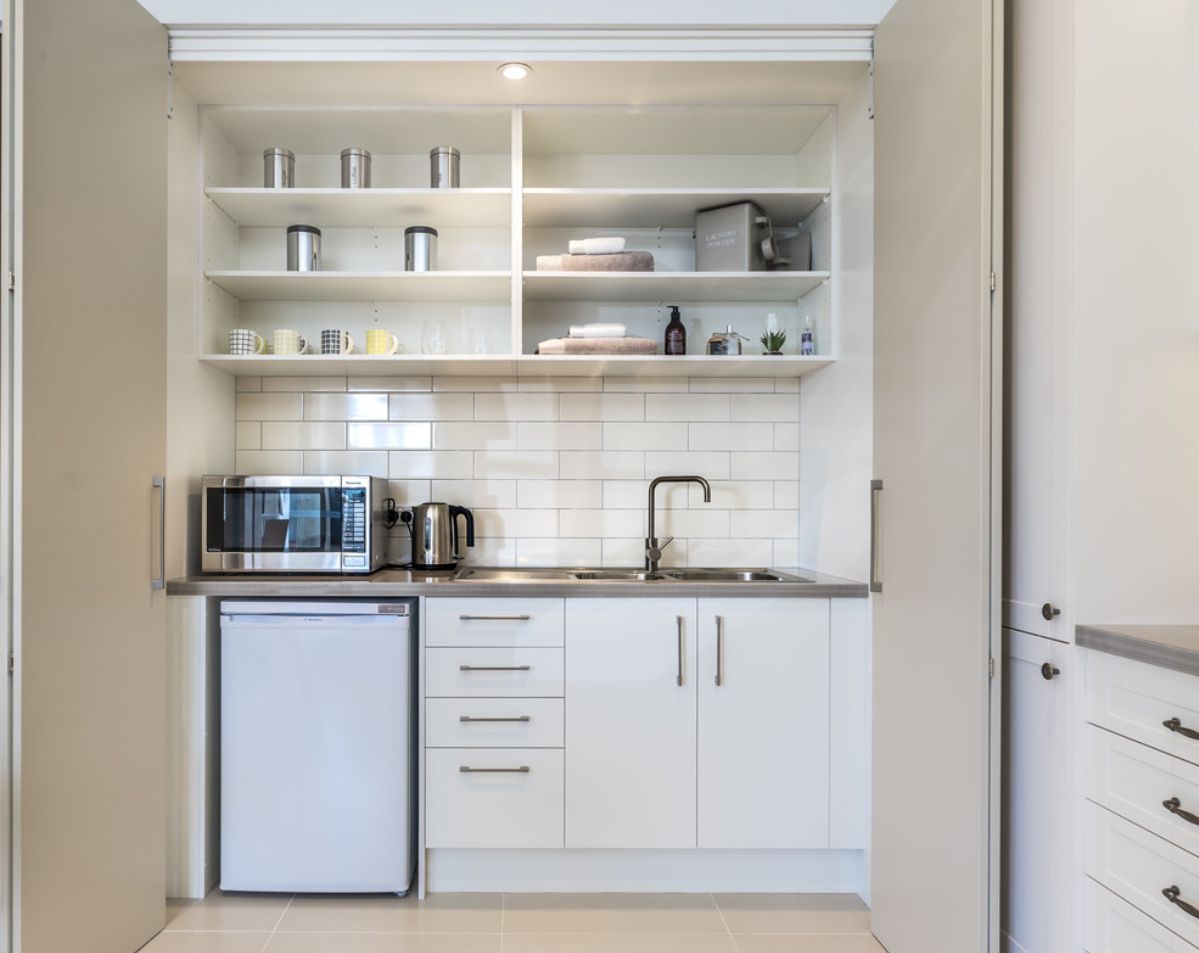 Kitchenette is the diminutive term for kitchen and that accurately suggests a smaller and more simplified version of a full-sized kitchen.

Being so small, kitchenettes don’t include many of the typical appliances, don’t have a pantry and offer a limited amount of storage.

At the same time, their reduced size makes them suitable for spaces such as pool houses, cabins, micro houses, basements, etc. Even though kitchenettes are in many ways inferior to kitchens, that doesn’t mean they can’t be practical or look great. In fact, the following examples show you just how much potential these spaces have when you put your mind to it.

This kitchenette is so small that you can actually hide it and make it look like a big closet space. Like most kitchenettes, it doesn’t have room for anything more than a microwave oven, a sink and a small fridge so it’s only suited for preparing simple dishes or reheating meals. Check out more custom designs at gspgroup.

This kitchenette is also small and it doesn’t even have room for wall-mounted cabinets because of the vent and support beam. Even so, it partially makes up for that with a pair of open shelves which look very stylish against the white subway tiles. Under the counter there’s a mini fridge and additional storage. This is the design of Marcelle Guilbeau.

Speaking of kitchenettes with little storage, check out this stylish-looking one. It has a single shelf just above the backsplash and an open space at the bottom. That in a way gives more freedom and flexibility because you can store boxes and crates under there but at the same time can also create the impression of a cluttered and disorganized space. Check out the details on housetweaking and decide for yourself whether you approve this design or not.

A kitchenette might not be the best option for a family home or a permanent residence but is perfect for a holiday retreat or a guest house like the one featured on beneathmyheart. In fact, this one seems pretty well-equipped. It has lots of storage, a big farmhouse-style sink and a small fridge seamlessly built into the cabinetry.

Given the small size of a kitchenette, there’s rarely room for full-sized appliances in here. There’s usually only space for .a mini fridge and a microwave. In this case there’s also a mini hot place which actually makes a big difference, offering more freedom when it comes to the dishes which can actually be prepared in here. Another note-worthy detail is the fact that the microwave oven is attached to the bottom of the wall-mounted cabinet, freeing up some counter space.

As it turns out, a kitchenette, even a tiny one, can be really appreciated in a hotel suite. This is one of the kitchenette spaces at the Graham & Co hotel in New York. It’s very small but it’s also practical without taking up valuable space which is actually what the whole point was in this case. You can prep or cook easy meals and there’s storage for a few basics items too plus the design is rustic and quite charming. The wood gives this whole setup a warm and inviting vibe.

The key to designing a nice kitchenette is maximizing space-efficiency and that can be done in a lot of different ways. Built-in appliances or mini appliances can save quite a bit of space which can be used for storage instead. Interior design studio Casework also managed to make this kitchenette look well-organized which is not always easy to achieve when space is so limited.

We mentioned before that kitchenettes are very versatile but could you actually imagine it being a part of a bedroom for example? Although it is an unexpected and unusual scenario, such an all-in-one configuration can sometimes be practical and user-friendly. This particular setup is the work of the By Design Studio.

Kitchenettes are common in studio or efficiency type apartments. Studio Jenny Andre Designing shows here a nice way to make the kitchenette stand out and differentiate itself from the rest of the functions in a small open floor plan. It’s done through color which actually turns this little space into a focal point. The high ceiling is a nice plus in this particular case because it offers a bit of extra storage space on top of the cabinets.

A kitchenette as small as this one is obviously not the best place to get creative with your cooking. Considering that it lacks an island and quite a few basic appliances, it’s suited for making coffee in the morning, reheating a meal or preparing very simple dishes such as breakfast omelets. That, of course, doesn’t mean it’s not practical or useful. It just means it targets a specific type of space for a specific lifestyle or type of person.

A while ago the team from HEIMA architects designed a series of micro apartments in Lithuania. Each has a surface of 25 square meters and consists of a living area, a kitchenette and a bathroom. The kitchenette is simple and modern, with a good amount of storage, wall-mounted cabinets and a bit of counter space that can also be used as a breakfast table.

This is the interior of a 13 square meter apartment in Poland designed by Szymon Hanczar. Although it’s such a small place, it a has a really airy feel. There’s a hanging net hammock in front of the window, a desk area, a dresser and a loft bed on the other side of the room. Underneath the loft bed there’s a kitchenette which has its look little space and feels super cozy.

This kitchenette is not part of a home but an office. It’s also not just any office but one that architect Randy Bens designed for himself and his team. He made it out of a repurposed shipping container. It came out looking really nice and modern, with a big, full-height window on one side that lets in lots of natural light, desks placed along the wall and a nice entrance with big frosted glass doors.

This is a really nice way to help a kitchenette stand out and contrast with the rest of the place. The narrow back wall of this room is just big enough to fit in a stove, a sink, a fridge and a tiny countertop. The fact that the back of the wall is covered in wood planks helps to give this kitchenette more character. It also creates a nice backdrop for the blue cabinets and the stainless steel appliances.

In case you’re wondering what the kitchen area inside a trailer could look like, this is a great example. This interior by The McMulling Design Group is space-efficient, welcoming and quite stylish as well. The windows bring in some sunlight and one of them doubles as a backdrop for the cooking and prep area. There’s plenty of storage inside the cabinets and the overhead modules and even a little corner sitting nook with a table and a bench.

The interior of this cottage is really charming and we like the kitchen in particular. It has this nice barn-style wooden door behind it which hides the bathroom and a slanted ceiling which doesn’t leave a lot of room for overhead storage. Even so, there’s plenty of counter space and a big farmhouse sink plus space for all the basic appliances. There’s also a nice rustic backsplash with a ledge for storing various things like coffee mugs, spice jars and so on. {found on airbnb}.

The Draper is a mid-century modern house on wheels designed by studio LandArt. It has a black exterior which has a sleek asymmetrical shape and a very warm and inviting interior with lots of wood and earthy color tones. The kitchenette is surprisingly big, with lots of storage cabinets, counter space, built-in appliances and a long floating shelf which can offer extra storage or can be used to keep potted plants and herbs in front of the large window.

The Tiny Project is also a house on wheels and, as the name suggests, it has a very small interior. It measures only 8 ft by 20 ft and in that tiny space the designer managed to include a little sitting area with a sofa, a tiny desk, a multifunctional table, a loft bed, a bathroom and a kitchenette. The kitchenette is placed underneath the loft bedroom and has two small windows with floating shelves in the corner and on one of the walls which offers limited storage along with the cabinet under the sink.

On the same subject, here’s another house on wheels and this one actually used to be a truck. It was transformed by its owner Joseph Tayyar and it’s surprisingly spacious inside. There’s a nice sleeping area at one end with curtains for privacy, a living area with a sofa, a desk and some extra furniture, a little dining nook with a couple of benches and a table and of course a kitchenette which is all one one side of the wall. It has floating cabinets above the windows, a wooden countertop and more cabinetry underneath.

This open concept kitchenette may not be very big but it has plenty of storage. As you can see, the wall-mounted cabinets are quite tall and go all the way up to the ceiling. That adds more storage up at the top for all the items that are not used on a daily basis like some appliances, pans and so on. There’s also a tower cabinet on one side that acts a sort of built-in pantry. {found on wellbuiltco}.

The placement of this kitchenette is rather interesting. Rather than occupying the side wall it sits perpendicular to it which allows it to basically also function as a space divider. It’s framed in wood which gives it a cozy look and it has a blue cabinets for a subtle rustic touch. The metal backsplash and the stylish pendant lamps add a lot of character to the design created by Classic Kitchens & Interiors.