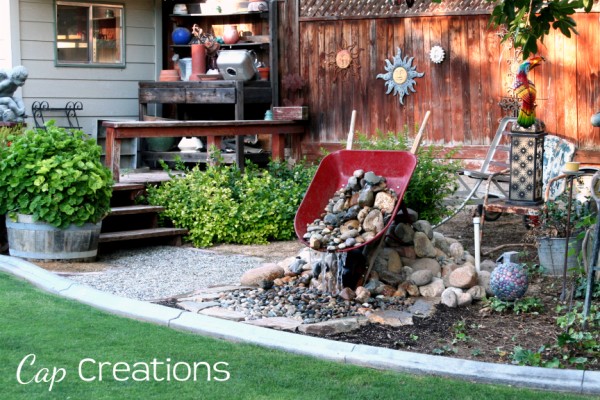 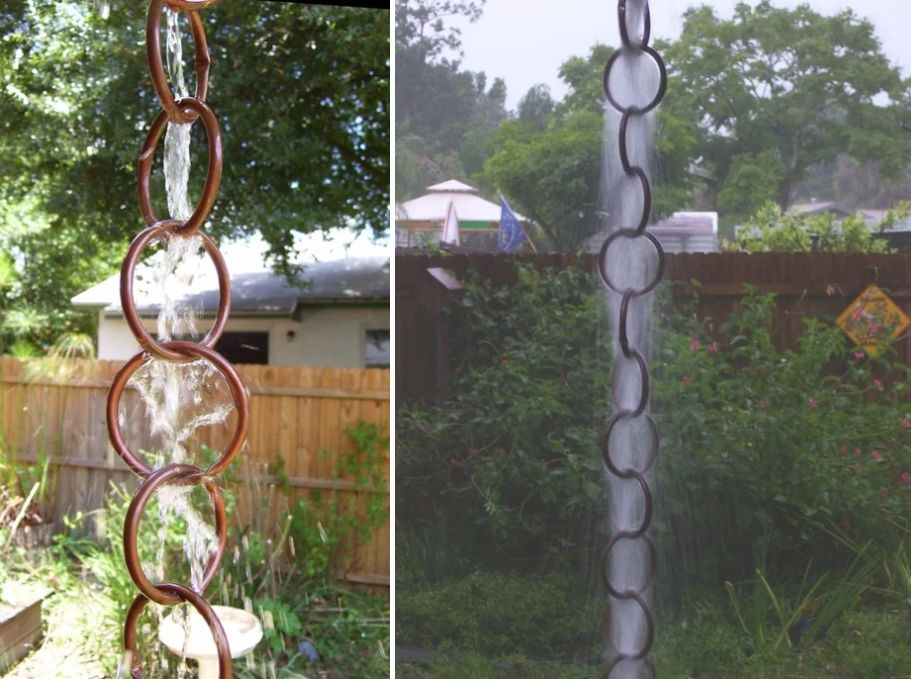 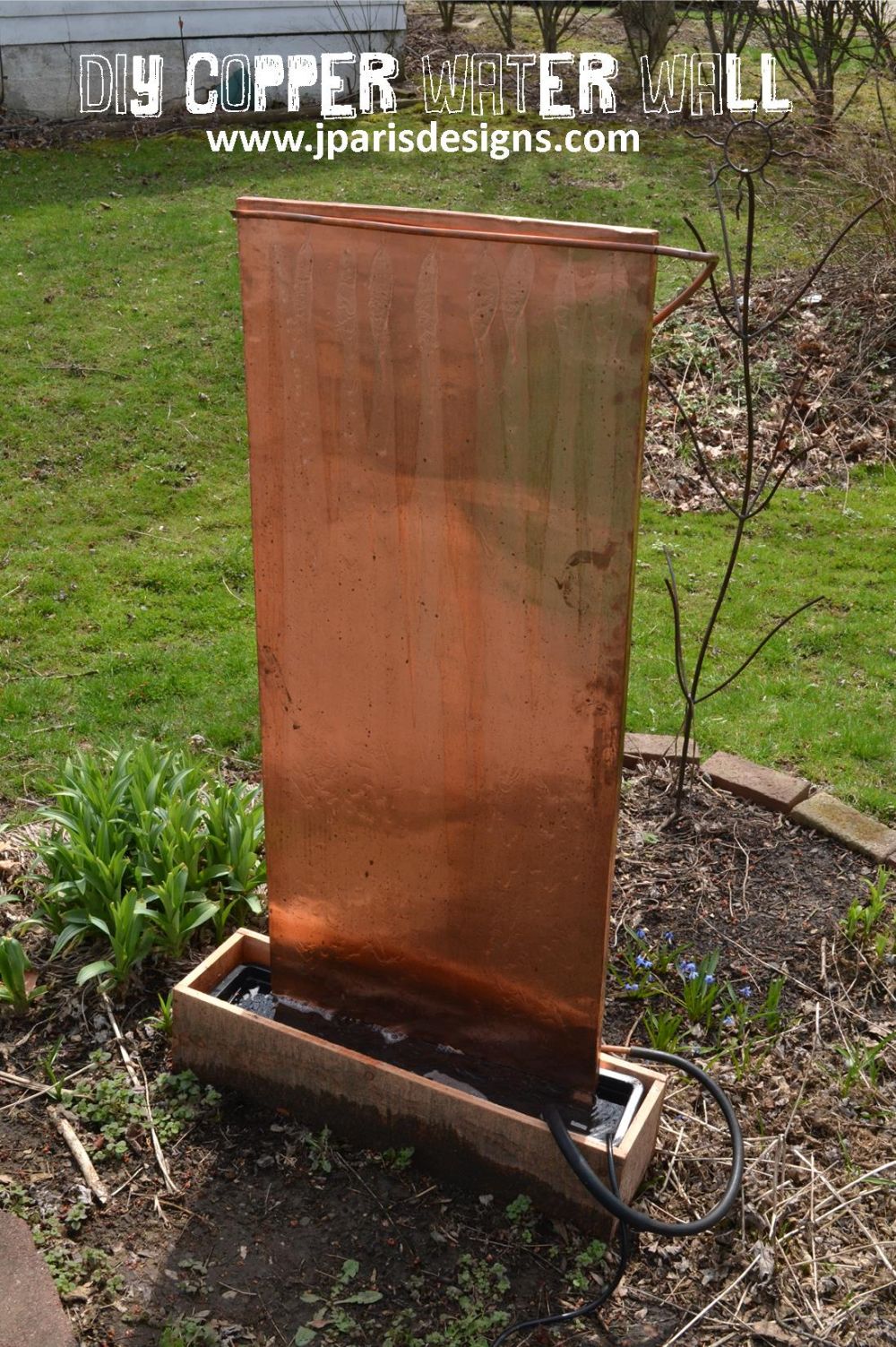 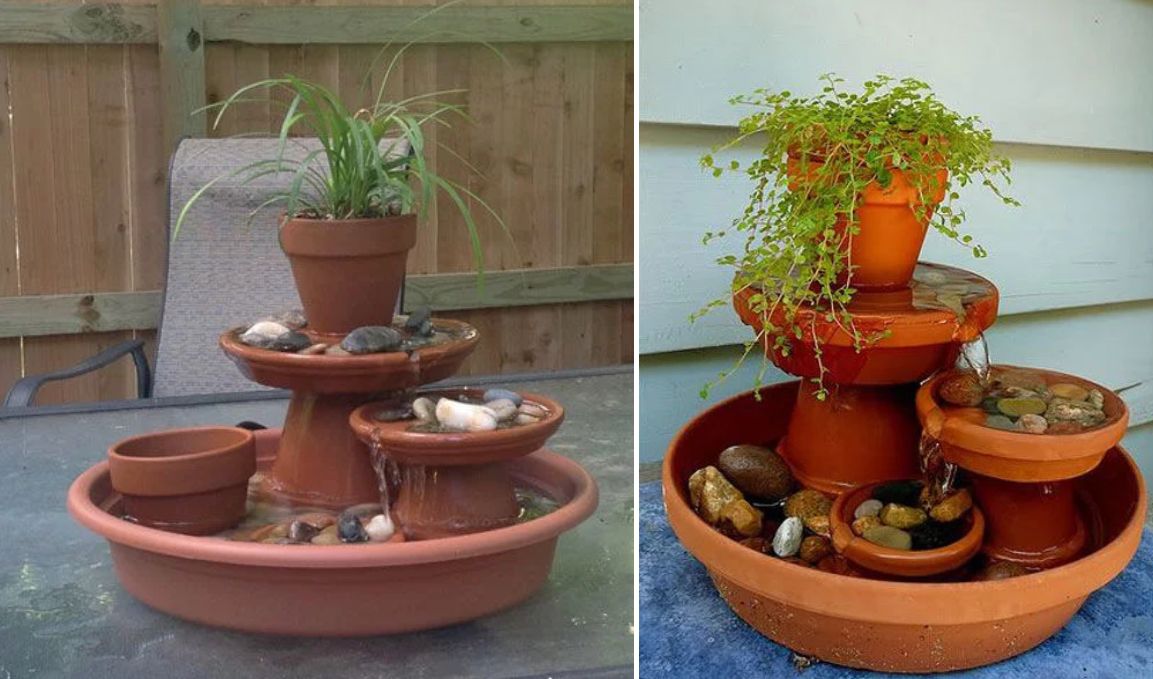 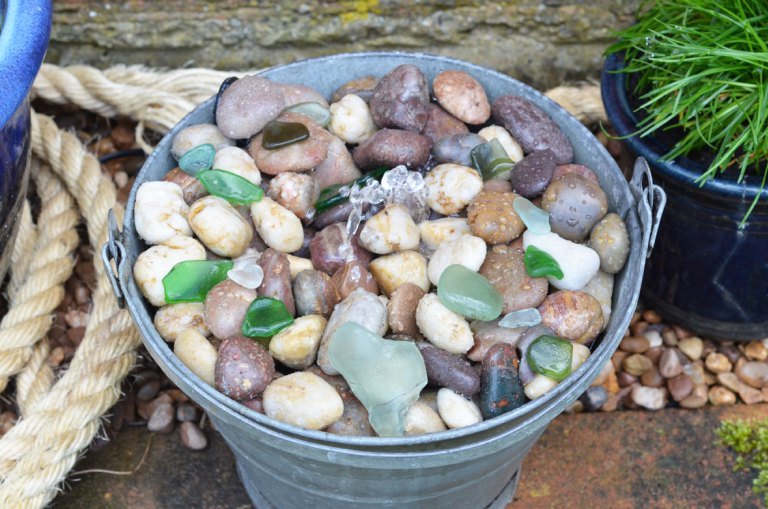 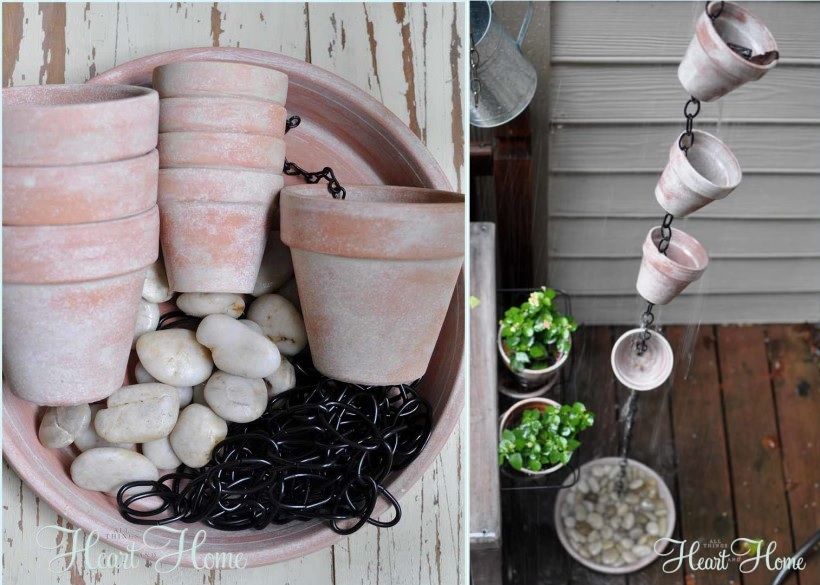 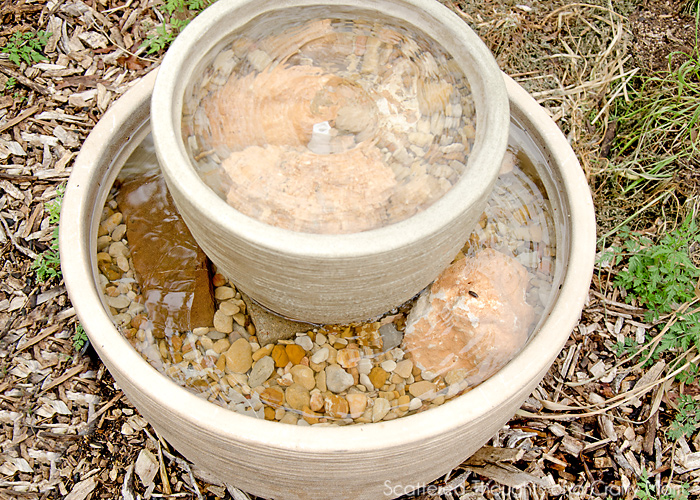 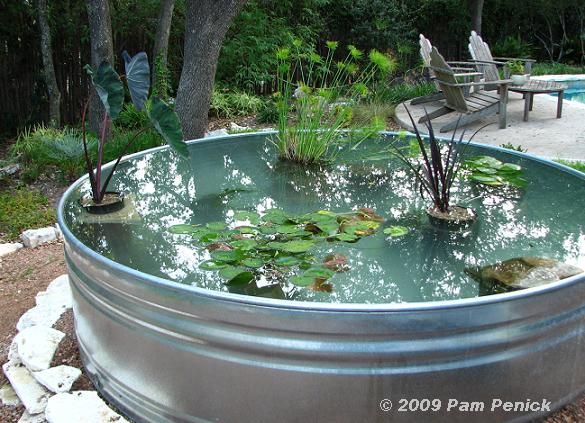 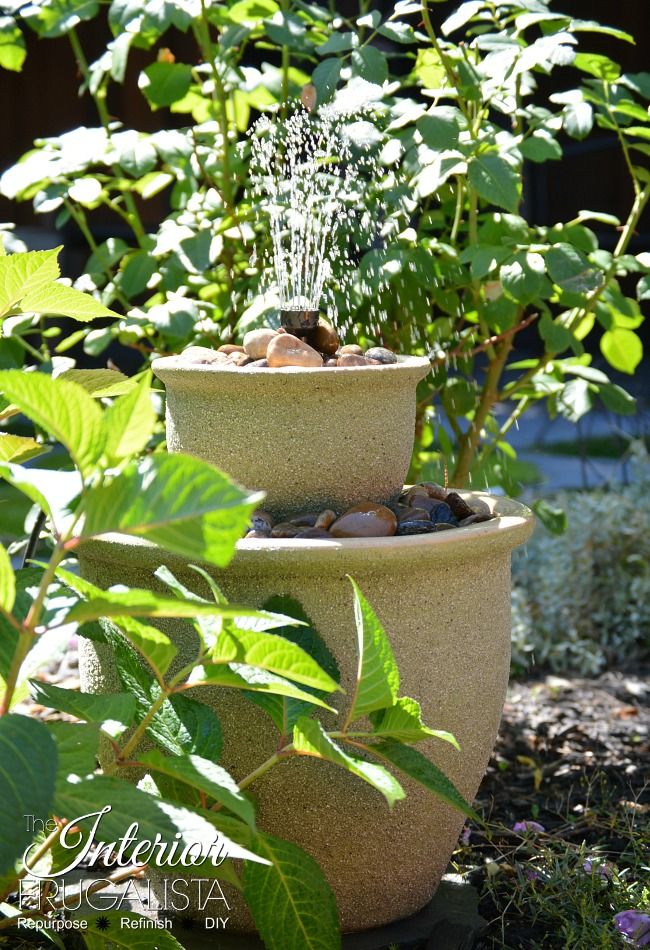 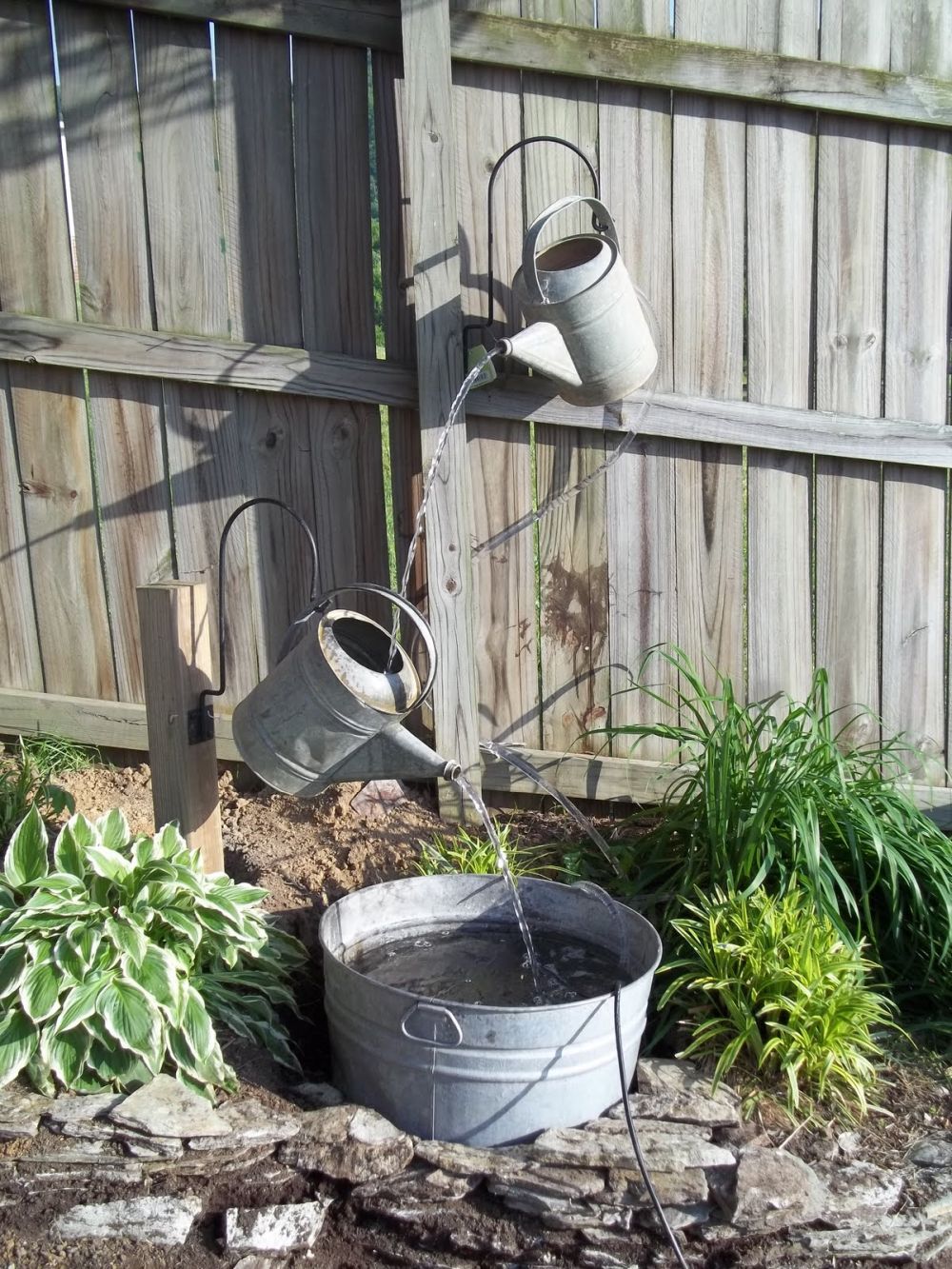 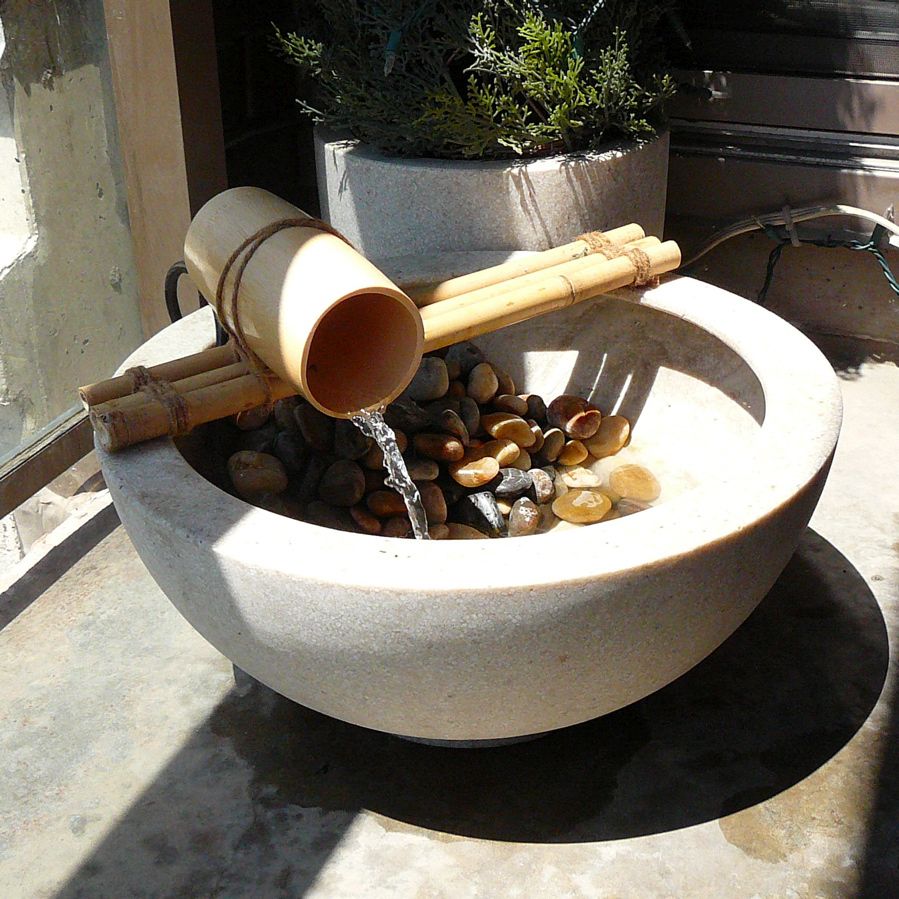 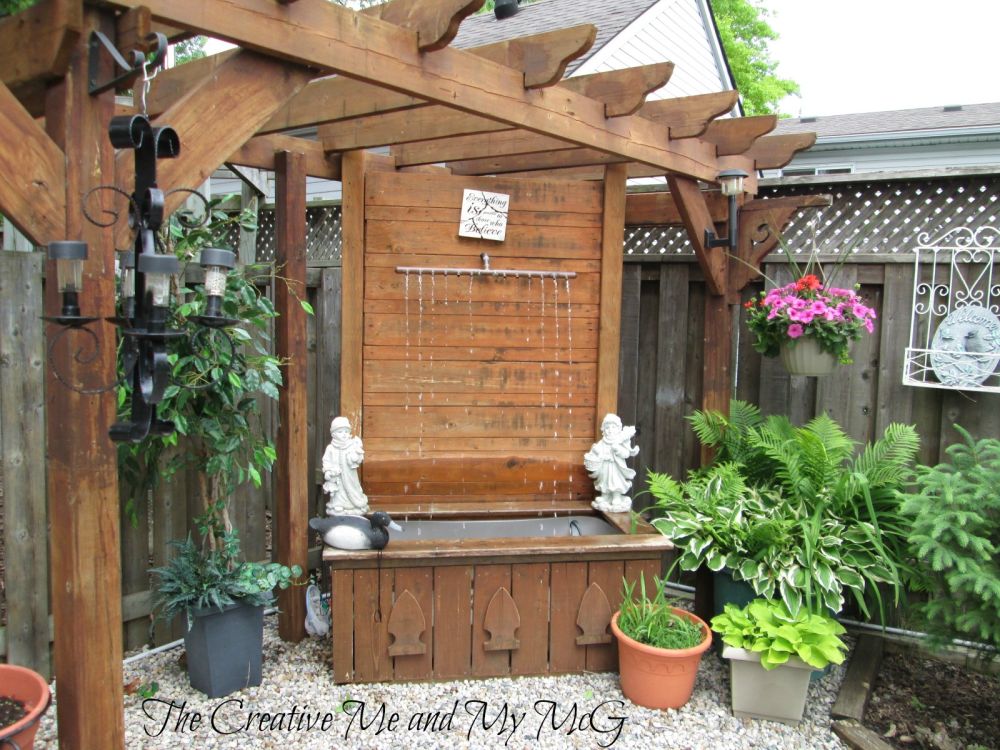 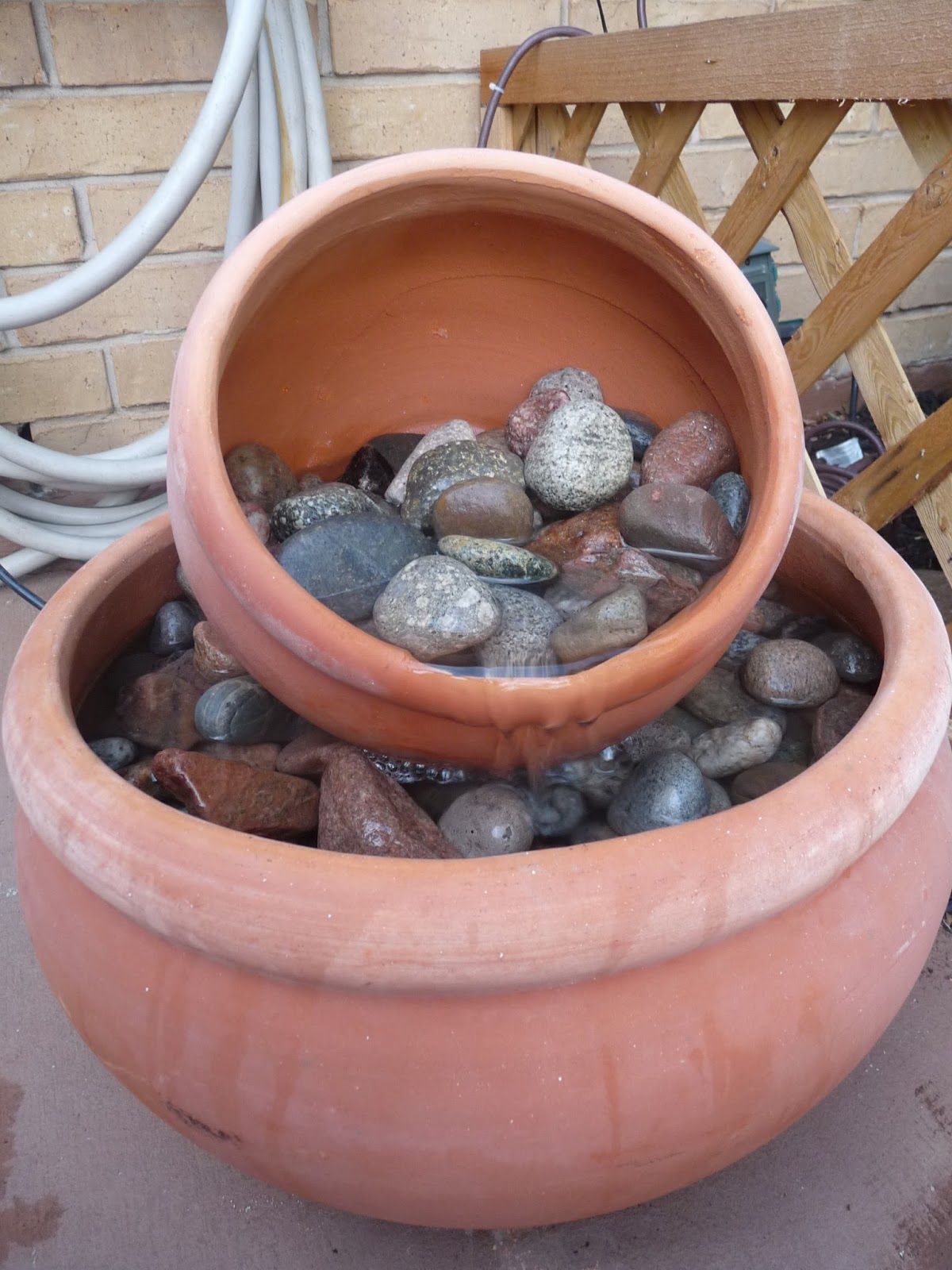 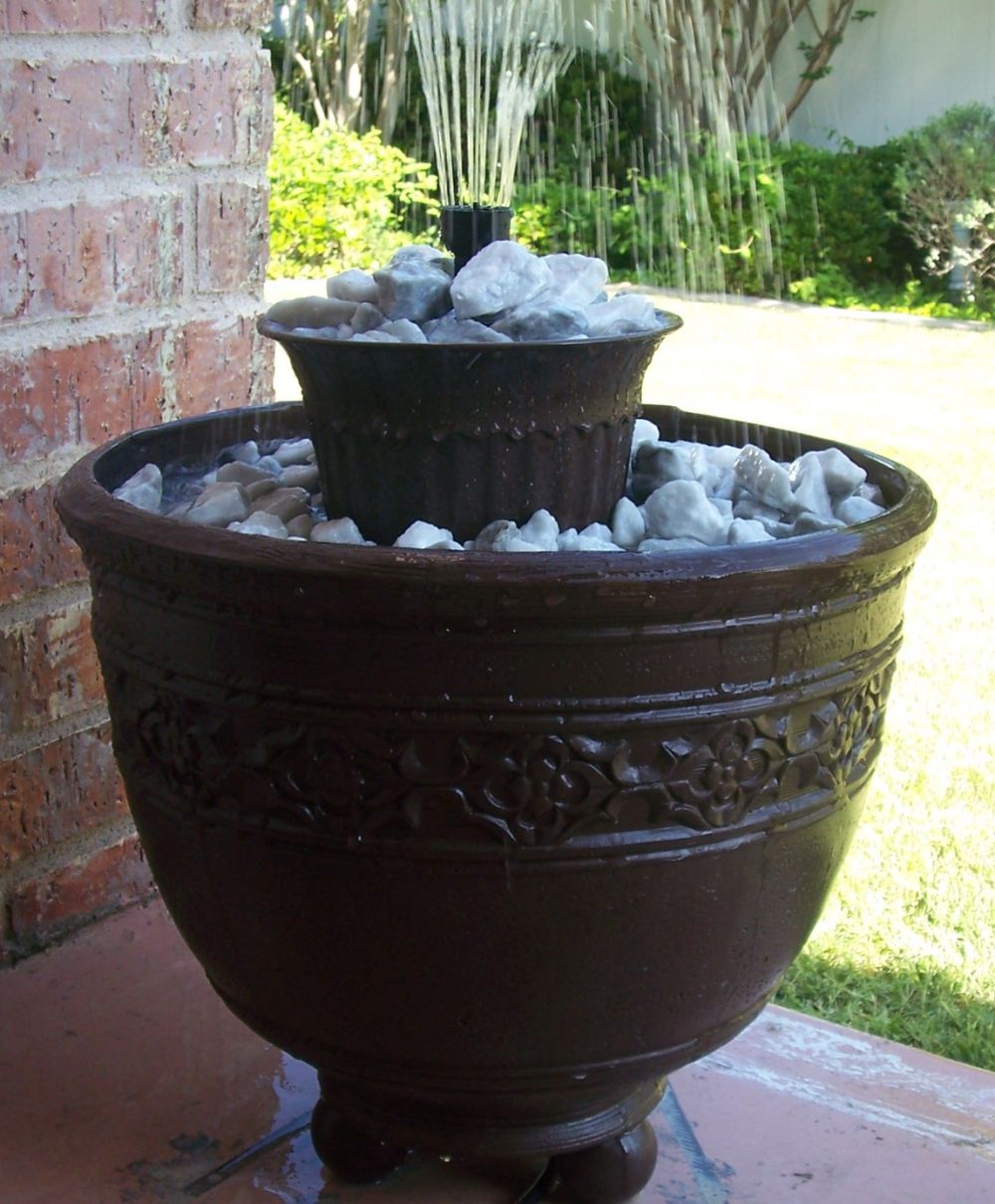 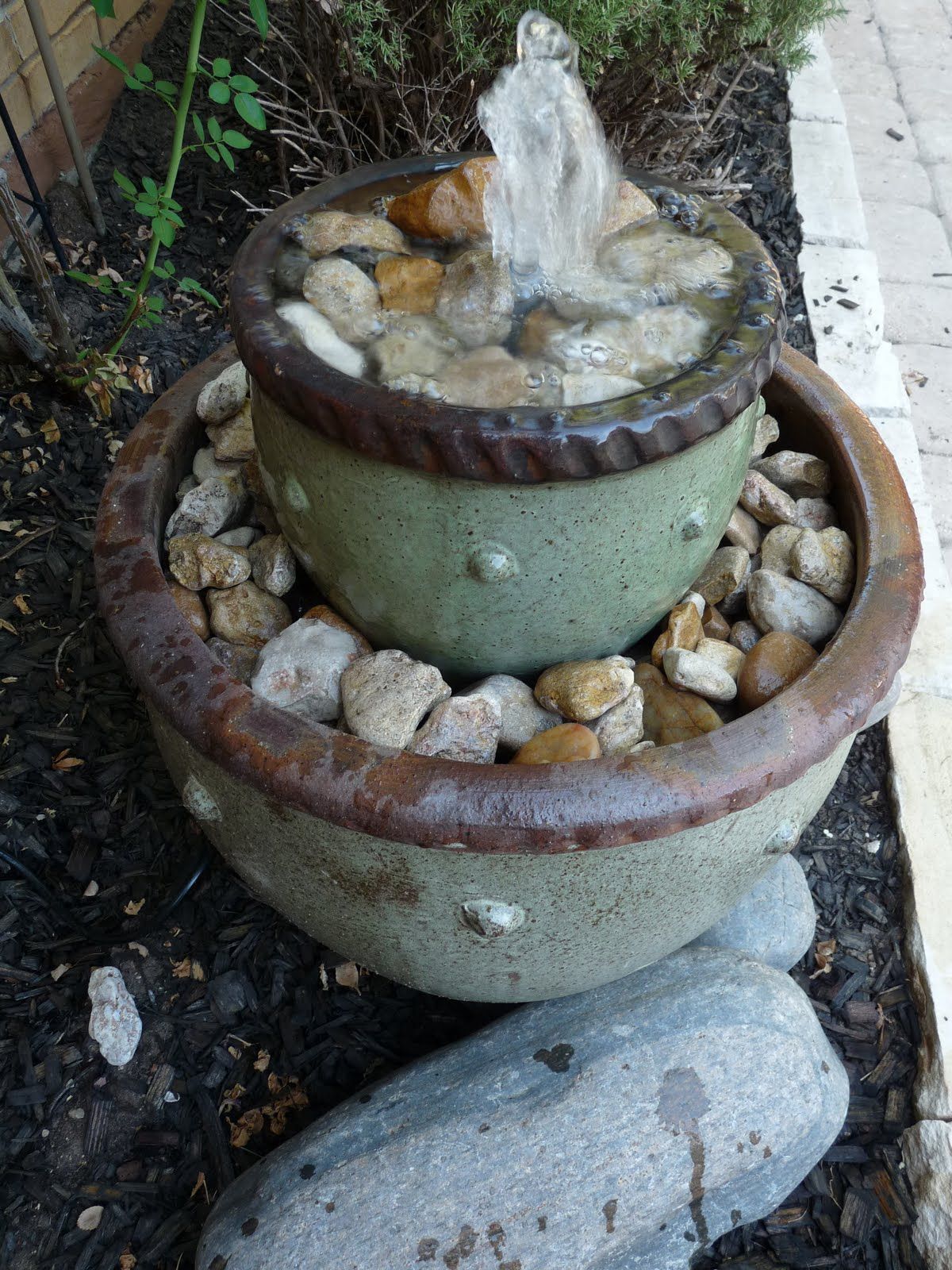 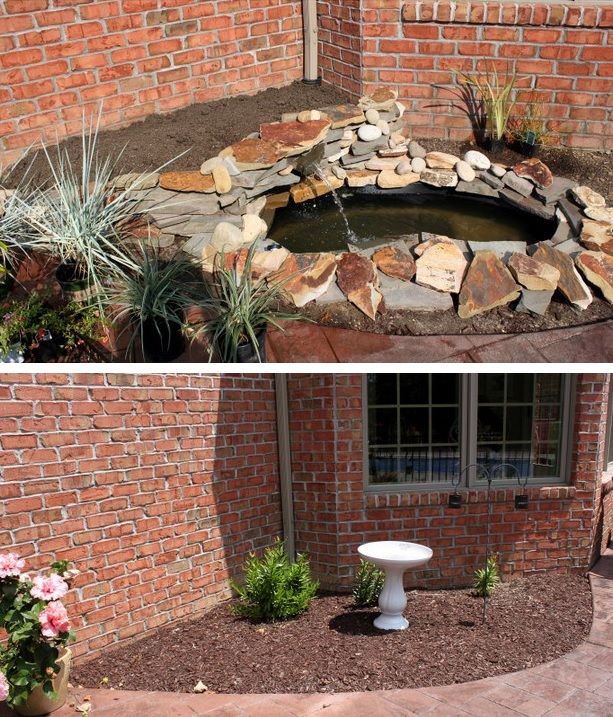 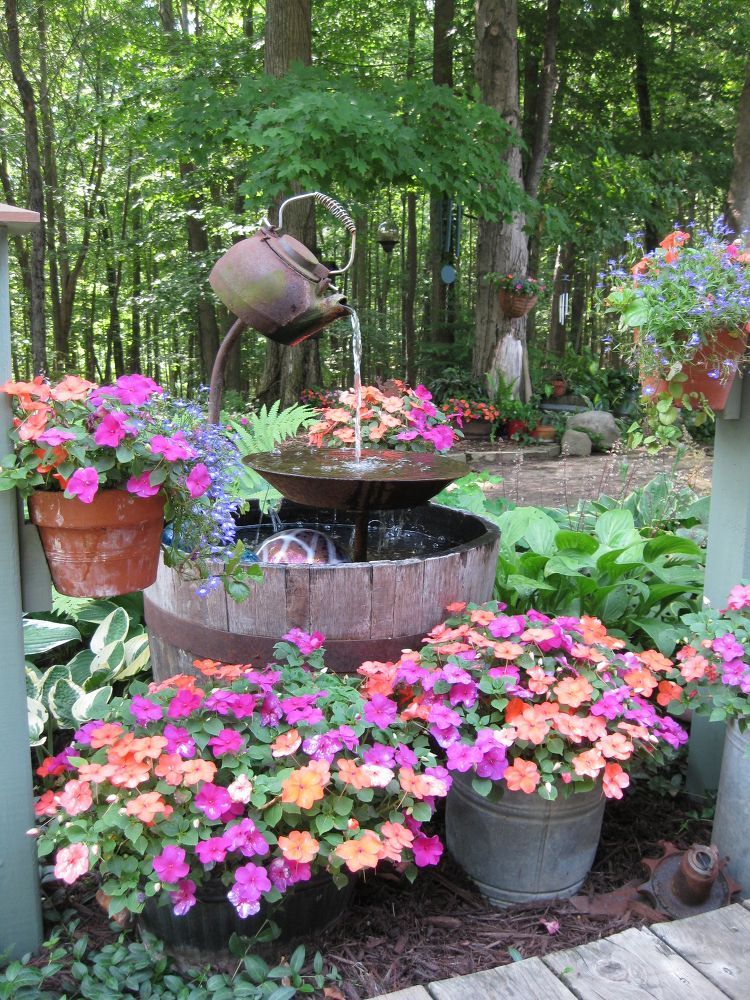 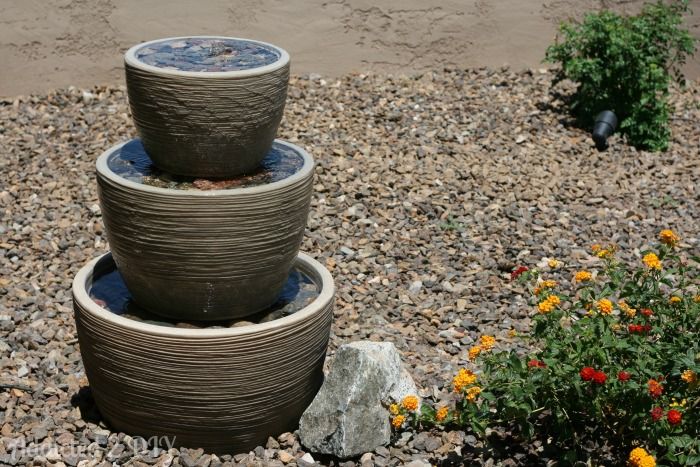 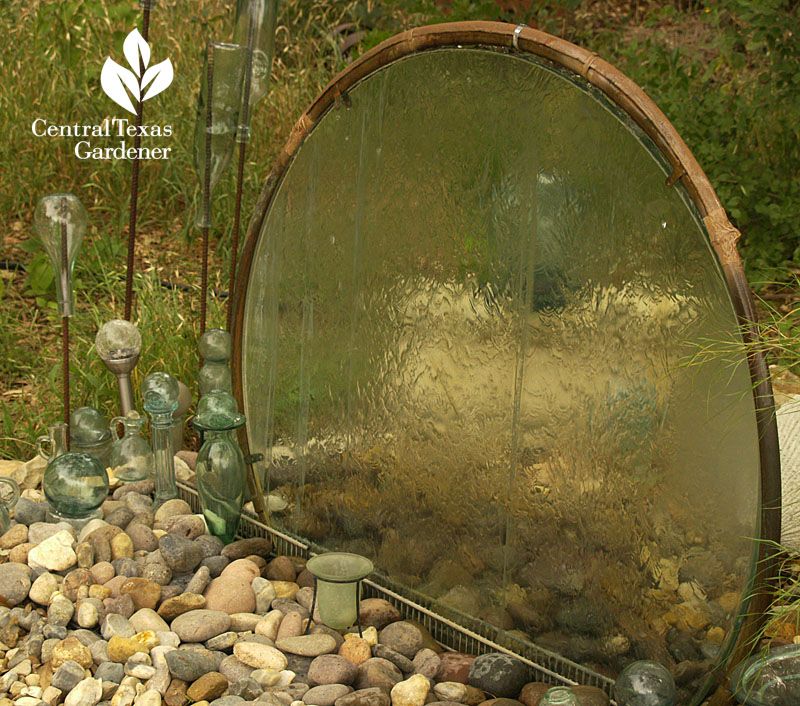 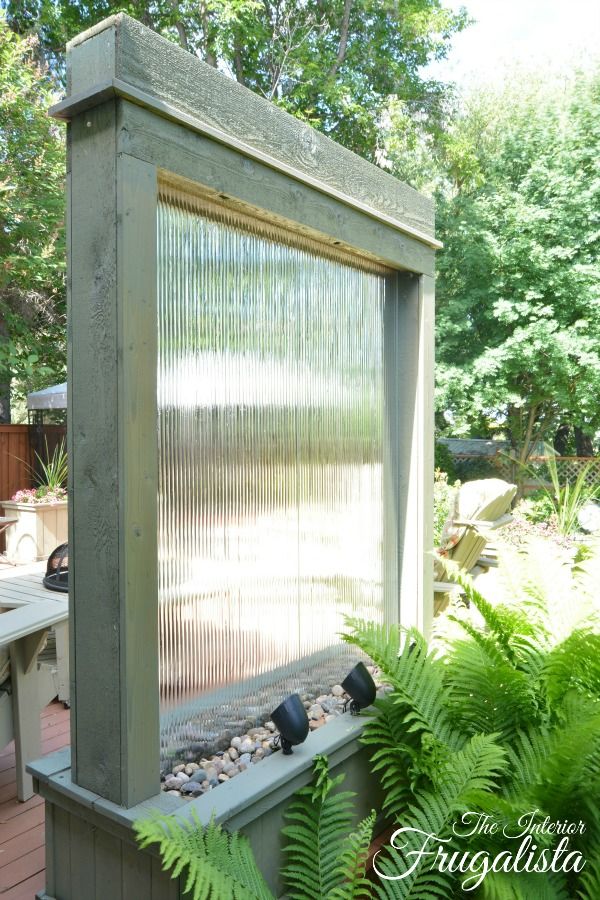 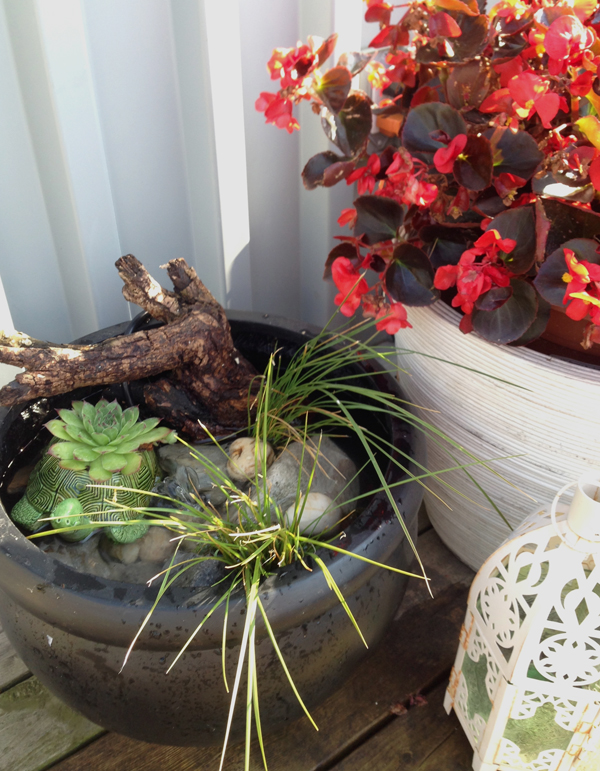 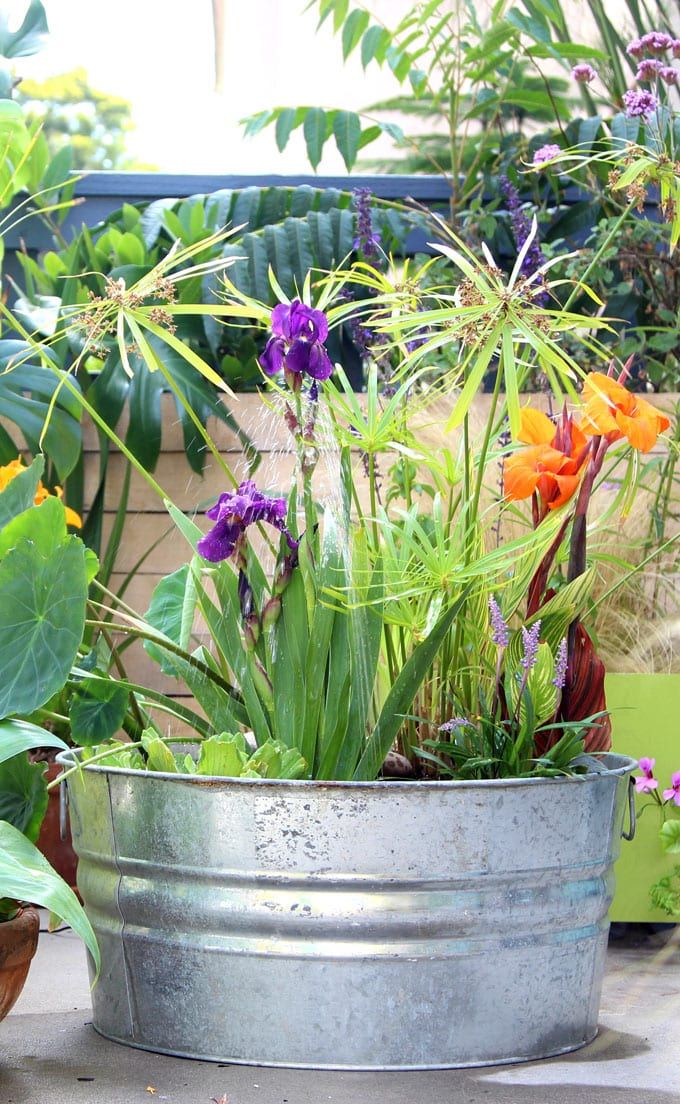 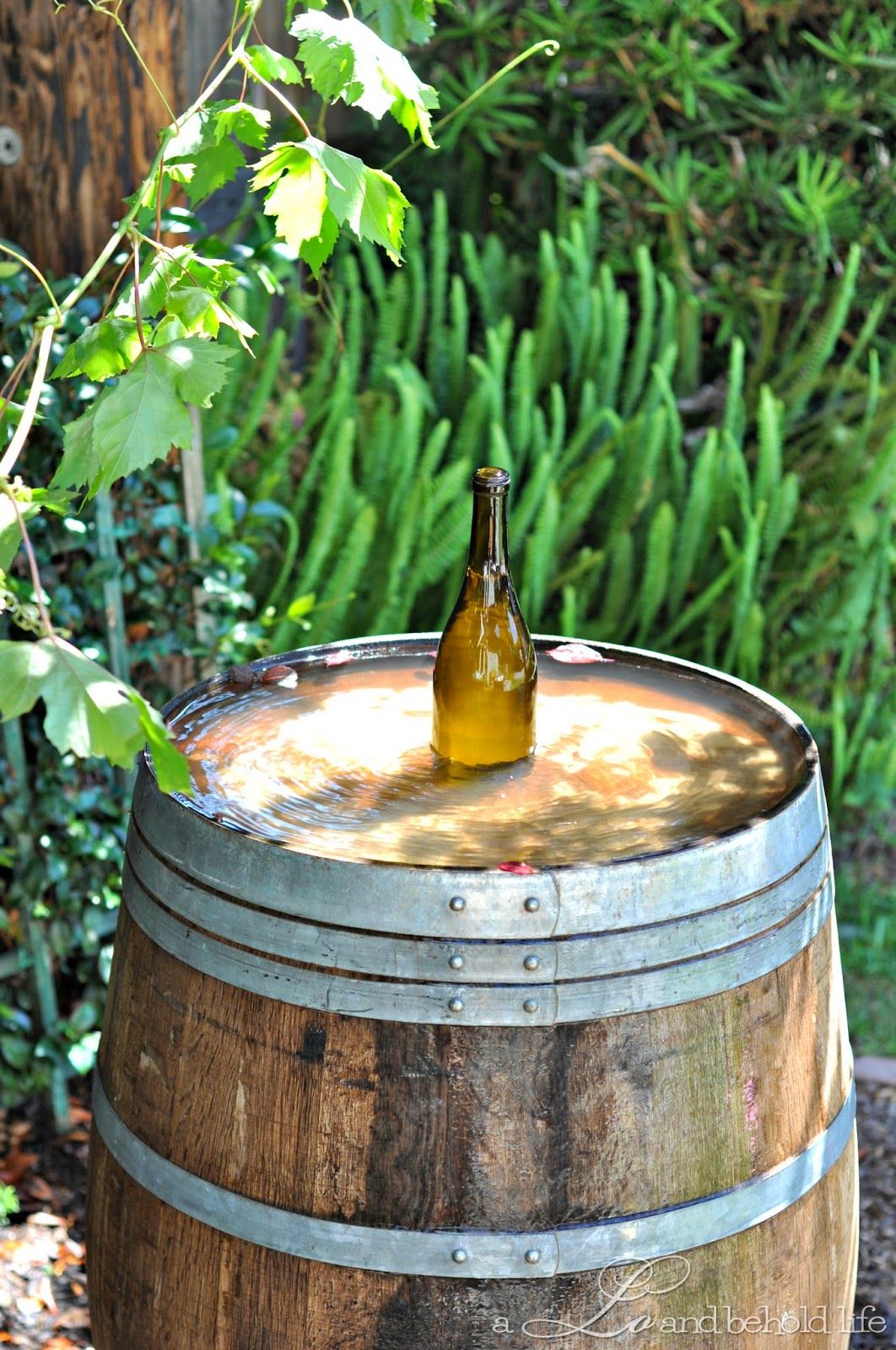 Redecorating or improving a space can be very rewarding and fun and it’s not just indoor areas that can be the subject of such activities. Take a look outside and think of what would make your yard or garden even more charming and welcoming than it is now. Would a water feature make a big difference? It almost always does. Of course, fountains, ponds and other such features can be very expensive to build so if you prefer something simpler, check out some of the DIY water feature ideas that we’ve gathered for you today.

As it turns out, not all fountains are difficult and expensive to build. This wine barrel DIY fountain is a great exception. You can find out all relevant information about the project from the tutorial offered on aloandbeholdlife.

One of the most difficult and most annoying things about garden fountains is the fact that you have to set up plumbing, electrical systems and other such things. However, you don’t have to worry about it if you use a simple galvanized tub and a solar fountain pump. Find out more about this strategy on apieceofrainbow.

Another cool idea can be to turn a large pot into a pond. It would make a lovely water feature for the yard or the garden and the transformation is super easy. It’s all about the decorations. You need things like rocks, a big and sculptural branch, some water plants (or faux plants) and maybe even something fun like a turtle ornament. Have a look at the project featured on thesweetescape for more inspiration.

What about a water wall? That would be a pretty cool water feature which can be displayed on the patio or the deck, not just in the garden. So how do you build such a thing? The tutorial from interiorfrugalista describes everything in detail. Check out the list of supplies required and consider customizing the design a little bit, just enough to love it even more.

Speaking of water walls, there’s this really cool idea that we found on centraltexasgardener. The water wall featured here is made out of an old glass table top. You’ll see that the transformation is fairly simple and very inspiring at the same time.

Another cool idea for a water feature would be a tiered fountain. You can make one out of three pots of different sizes. the one at the bottom is the largest. Put a bunch of stones or pebbles in it and then place the second pot on top, making sure it doesn’t tip over. Fill this one with rocks too and then add the third pot on top, repeating the process. When you fill the pots with water, it will look quite stunning. the idea comes from addicted2diy.

You can repurpose a lot of things when making a DIY water feature. a particularly fun and inspiring idea in that sense comes from hometalk. Here you can find out how an old teapot became the focal point of this awesome fountain and in fact of the whole garden.

Waterfalls are very cool too. In fact, they can be pretty spectacular. Of course, you won’t be able to have a huge waterfall in your garden but maybe a small one would do. Have a look a look at the tutorial from ohmy-creative to find out how a DIY water feature of this kind can be built from start to finish.

Flower pots are more versatile than you’d think. You’ve already seen a few DIY water feature ideas that involve flower pots and we’ll show you a few more in the following examples. This one is a fountain made out of two pots. You’ll need a bunch of rocks (and some bricks too!) if you want to make something similar so make sure you’re prepared for the task. You can find a step-by-step tutorial explaining everything on thehappyhomebodies.

The strategies for building a DIY water feature differ based on the type of feature you want to create and on the design details. For example, not all fountains are alike. The one featured on scrapallday is quite different from what we’ve seen so far. If you like it and you want to make one of your own, you’ll need the following: a large pot, a small pot, a fountain pump, a nozzle kit, marble rocks, tubing, wood ball knobs and cement.

Isn’t this flower pot fountain charming? You can tell that it’s simple and easy to put together but that doesn’t make it any less beautiful. In fact, it’s part of its unique charm. Curious how the small pot manages to stay at that particular angle? There’s actually a third pot which keeps it in this position. You can’t see it but it’s there. Check the tutorial from thehappyhomebodies to find out what other surprises await you.

The DIY water feature from thecreativemeandmymcg is special too. It has a container at the bottom which collects all the water and a feature similar to a shower head made out of a pipe with multiple holes in it at the bottom. the water drips creating a calming and relaxing sound. Put it in your garden or yard and customize it however you wish.

Speaking of calming and relaxing DIY water feature designs, check out this awesome project from safaffect. It’s very chic and very elegant. To make something similar you need a few bamboo pieces, a flexible clear hose, a bunch of pebbles or stones and, of course, a container, preferably one made of stone.

You can make some really cool things using old items which you might already have. For example, you can combine a few old watering cans and a bucket or a barrel to make an awesome water feature like the one featured on dawnmarie100. This project requires a small water pump, water tubing, hanging brackets and a drill, in addition to the containers.

This isn’t the first DIY water feature made out of plant pots that we’ve looked at but we’ll check it out anyway because it looks quite charming. We like the texture of the planters and the way the water sprinkles at the top. There’s something very relaxing about this whole composition. If you like it too, check out interiorfrugalista for more details.

Not a big fan of water sprinklers or fountains? Perhaps a small pond would be better suited for your garden. We have the perfect project to show you in this sense. It comes from penick and it’s quite easy and quite affordable too. All you need is a stock tank, water, some plants that love water and some little fish that would enjoy swimming in your new pond.

A bubble fountain could be fun and charming too. To make one you need the following: a submersible pump, clear vinyl tubing, two waterproof pots (a large and a small one, the latter with drainage holes), a brick or a cinder block, a drill, some rocks, pea gravel or small decorative river rocks, clear waterproof silicone sealant and some electrical supplies. Find all the details on scatteredthoughtsofacraftymom.

There’s more to this fountain than you actually see. This is a buried fountain which takes up the whole area covered with rocks. The project (which you can find on goodshomedesign) requires quite a bit of planning and hard work so be sure you know what you’re getting yourself into before starting.

Some DIY water features are very ingenious and not at all what you’d expect. One case is this rain chain idea from allthingsheartandhome. It has a river rock basin and several terra cotta flower pots attached to a black chain. Surprisingly, this is a quick and easy project so don’t hesitate to try the idea too if you like it.

You’re probably thinking this is just a bucket filled with rocks. Well, think again because it’s not full of rocks and is in fact a DIY water feature. Find out all the secrets related to this project in the tutorial offered on makingforliving.

This DIY water feature idea comes from instructables. To make something similar you need a few flower pots with saucers and a large container to put them in plus some decorative rocks and a plant. Some glue, plastic pipes, a drill and a water pump are also required.

Here’s a cool idea: make a fountain that floats on water. Well, it doesn’t actually float as much as it stands on a support but still, it’s a cool idea. It comes from instructables and in order to make something like this you’d first need some sort of pond. Of course, you can improvise and use a large container filled with water instead.

Water walls are interesting no matter what they’re made of. Things get even more interesting when you come across a water wall like the one we found on jparisdesigns. This one is made of copper. It changes color over time and that’s part of its character.

Remember that rain chain made of terra cotta pots we showed you earlier?That’s not how rain chains usually look like. They’re typically similar to the one featured on instructables. If you like it, you can make your own using soft copper tubing, PVC pipe, diagonal cutters, solder, a blow torch, flux and pliers.

Some of the most beautiful and inspiring water features are the one that manage to look natural and to look as if they belong there. That can be achieved in plenty of ways, some of which may surprise you. Check out this wheelbarrow water fountain featured on apscreations for example. Isn’t it spectacular? It fits into the landscape perfectly even though a wheelbarrow full of rocks and water isn’t what you’d expect to see here…or anywhere else for that matter.