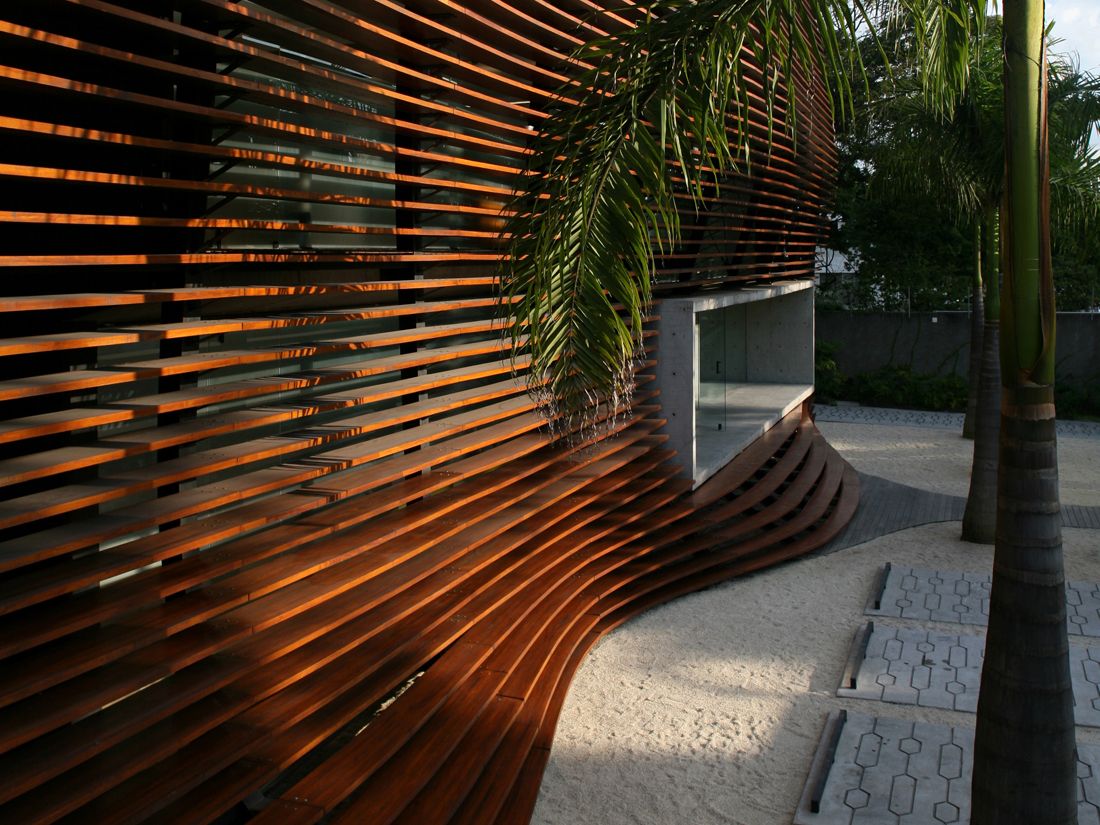 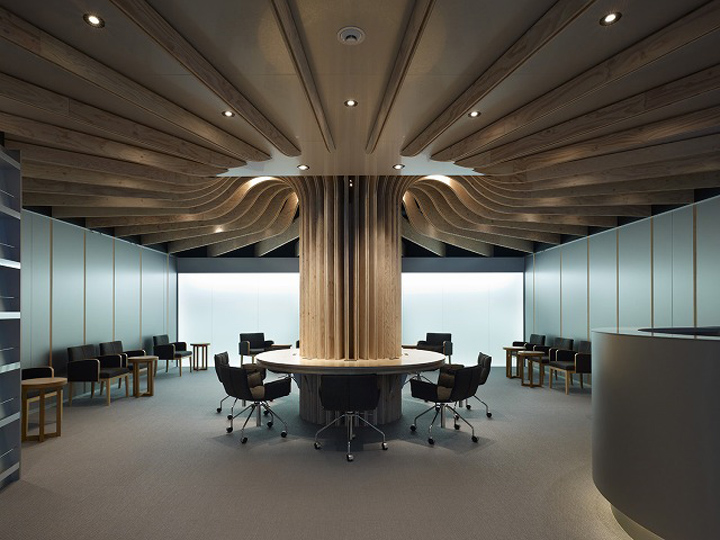 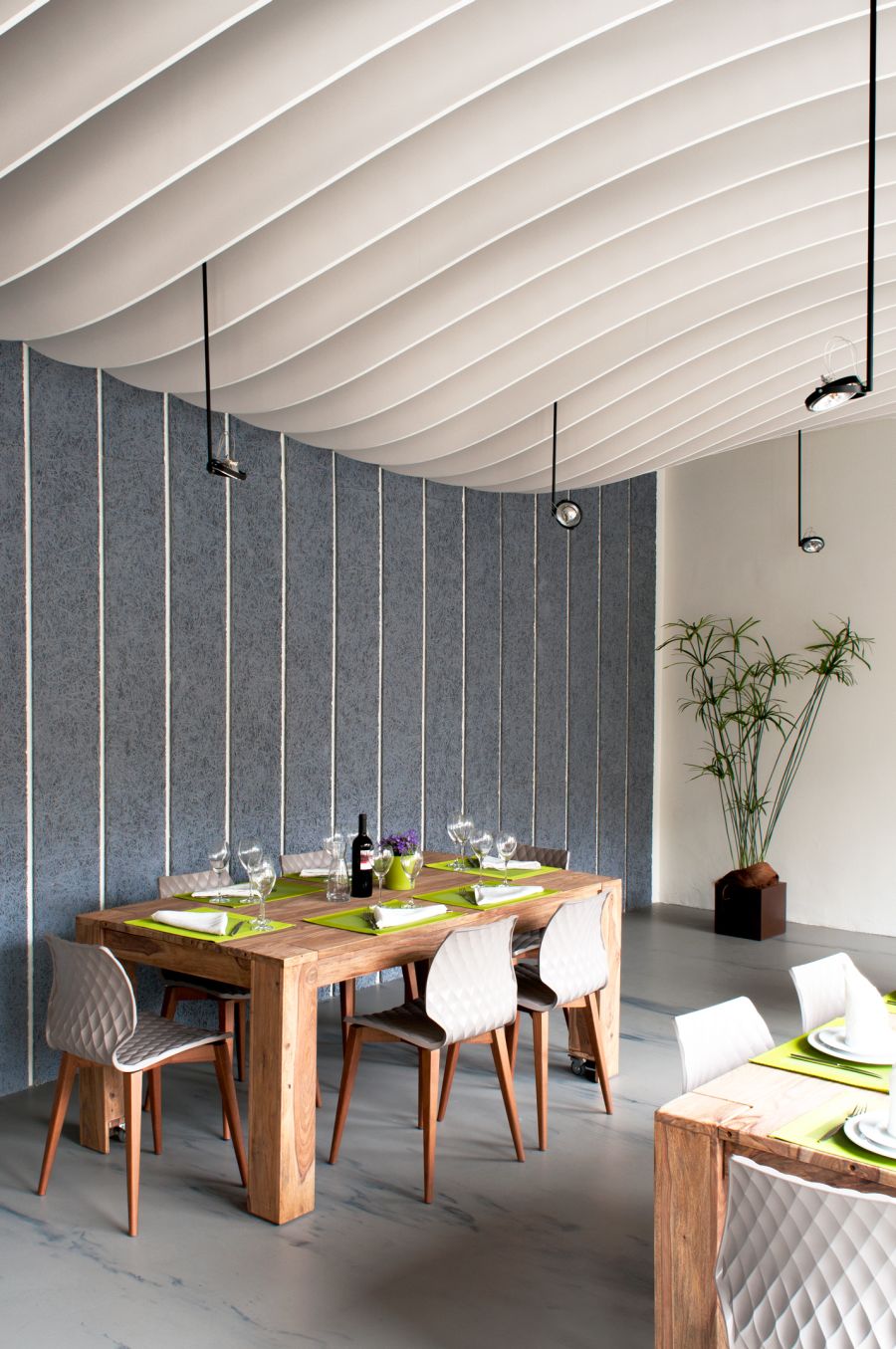 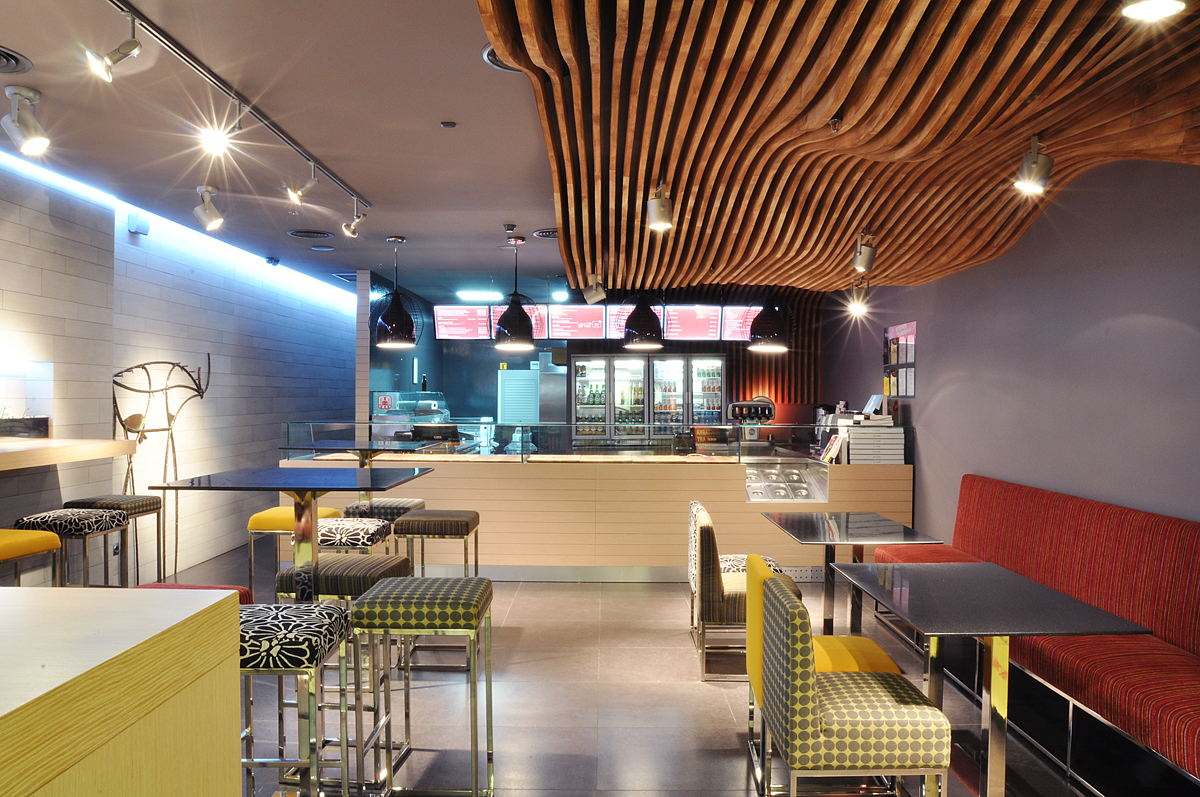 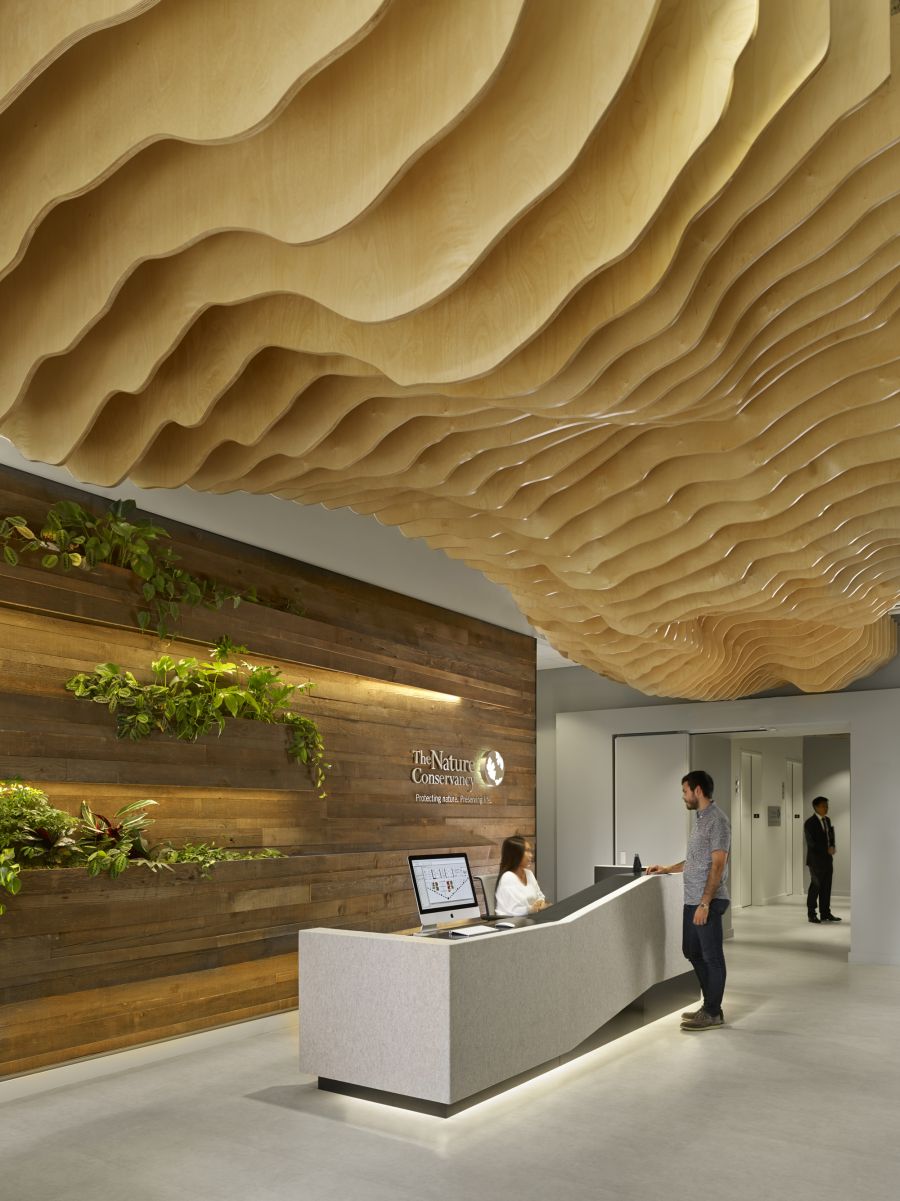 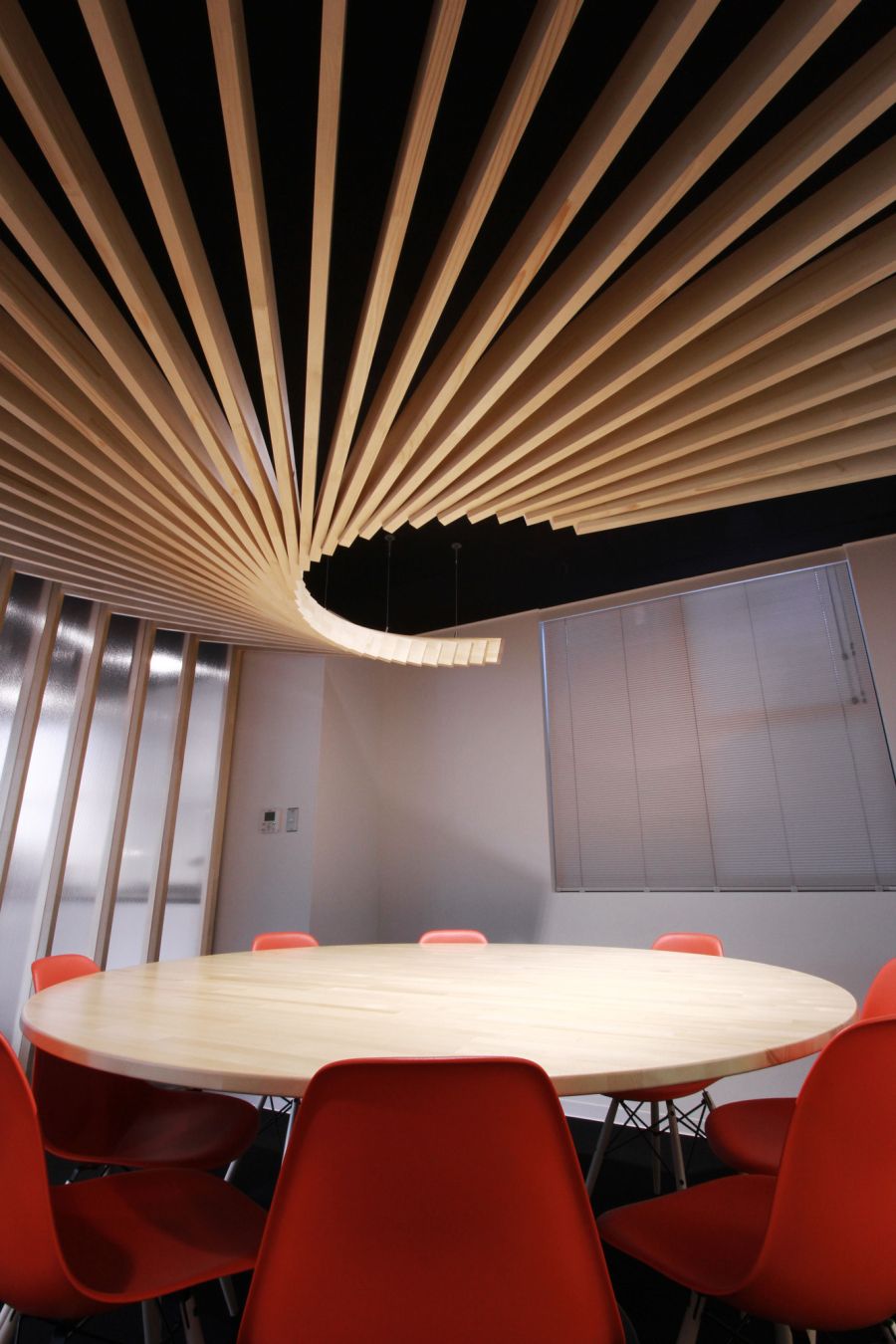 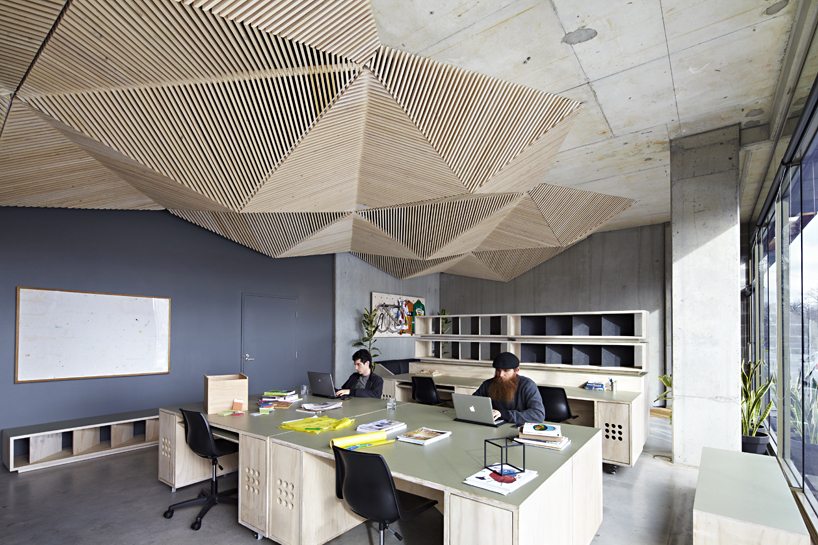 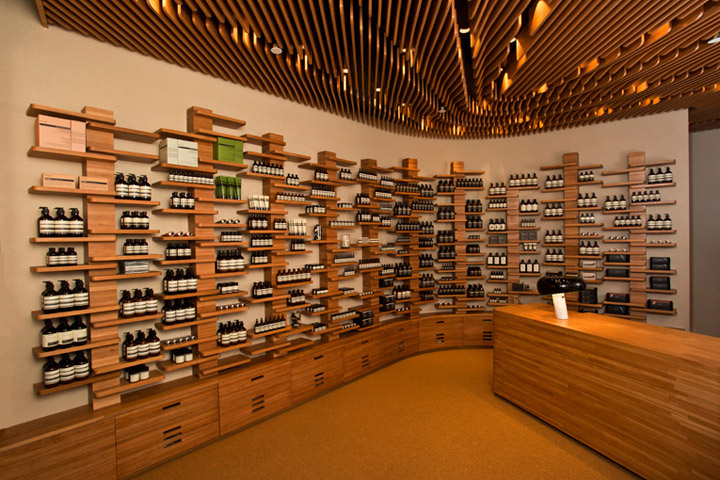 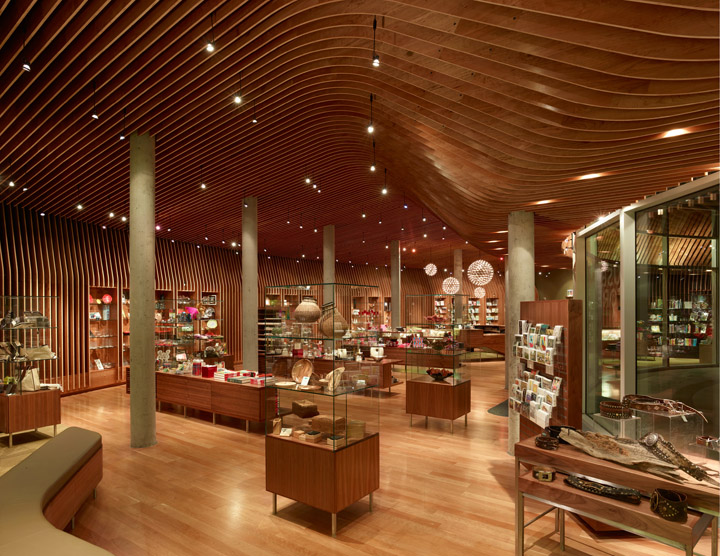 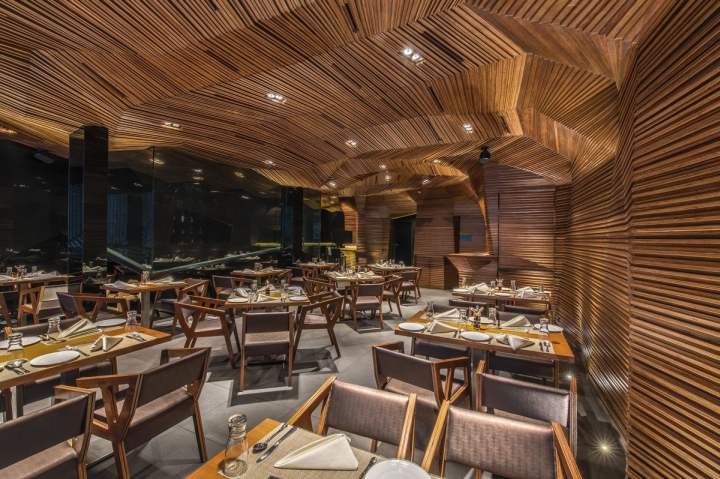 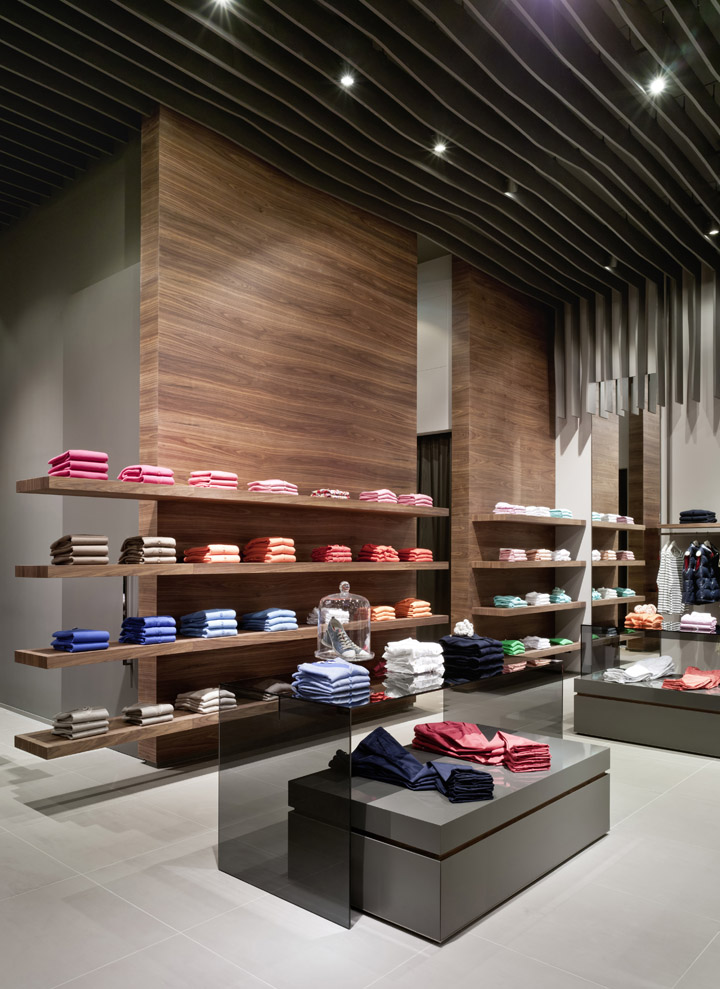 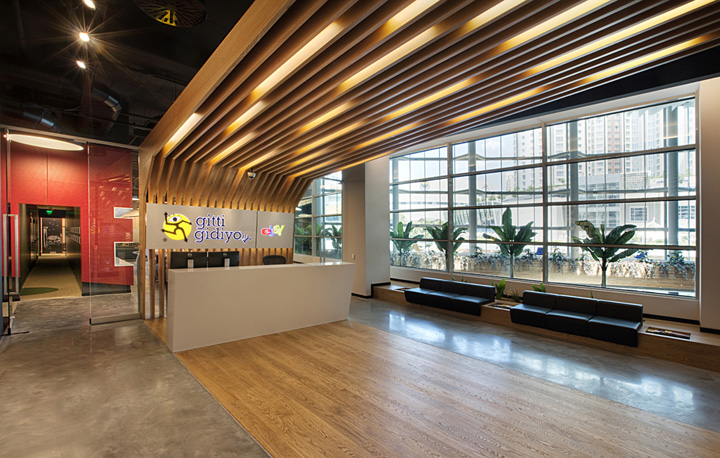 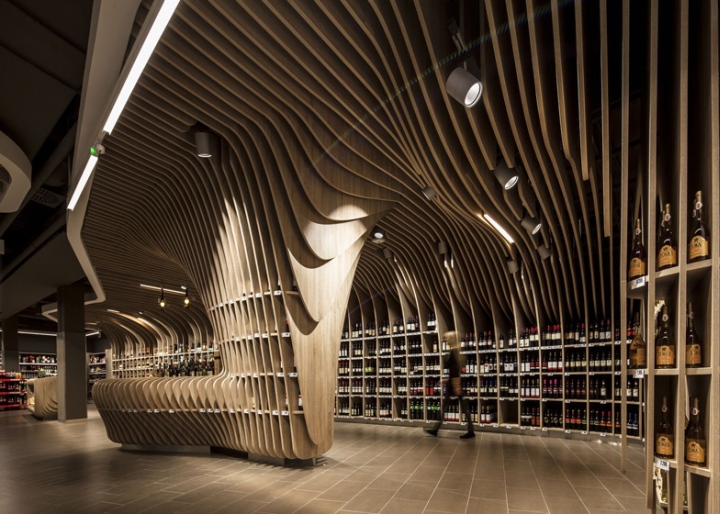 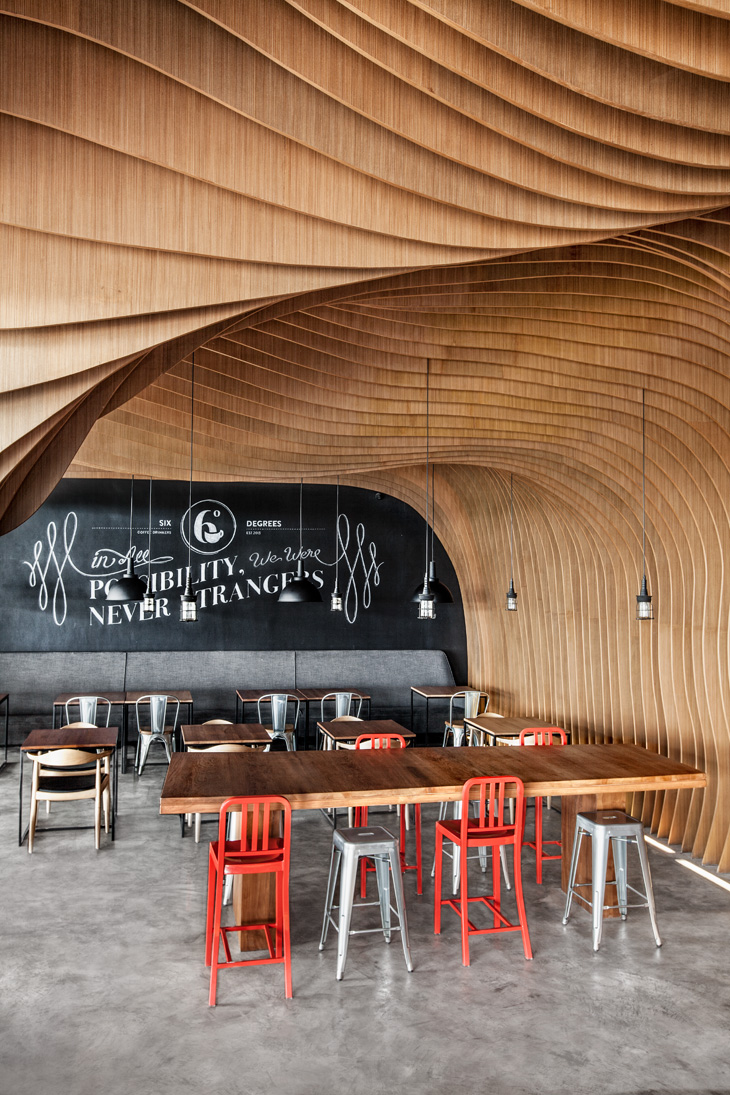 The design of the ceiling can completely change the look of your home, especially is it includes certain unconventional or particularly eye-catching details such as glamorous wooden waves. The combination between a wooden construction and a wavy structure is highly intriguing, eye-capturing and sophisticated and, although not usually employed when designing residences, it is also highly versatile.

The Six Degrees Cafe in Alam Sutera features such a design. It was a project by OOZN Design and the goal was to make the cafe memorable and cozy. The element with the biggest visual impact is the ceiling and rear wall structure with meticulously designed undulating lines.

LAB5 architects designed the Spar supermarket flagship in Budapest, Hungary and their inspiration came from the flow of customers that visit this place. There are two zones where the ceiling takes a 3D form and flows down the ground and this is where the ambiance becomes really pleasant and welcoming.

The Ebay office in Istanbul was designed by OSO Architects and it too has a very interesting look. The entrance hall features a wooden pergola with an undulating, semi-permeable design which ensures a visual relationship with the social area while also adding to the overall modern and sophisticated aspect.

When Michael Meyer Liza & Yves opened a new store concept in Bochum, Germany, they relied on Blocher Blocher Partners to make it look impressive and luxurious. The wavy ceiling shapes the store and becomes a focal point, offering the space a graphical and glamorous look.

The interior of an old factory warehouse in Mumbai, India was completely stripped off of its internal walls and transformed into a restaurant and nightclub. Sanjay Puri Architects was in charge of this amazing transformation and the team managed to create a sculptural and abstract design by enclosing the restaurant in undulating angular planes of thin wood strips.

Located in Bentonville, Arkansas, the new Crystal Bridges Museum store was designed to offer a warm, natural and tactile experience. Architect Marlon Blackwell managed to do that by using traditional techniques together with new construction methods and simple, repetitive elements to envelop the space in a series of parallel cherry plywood ribs.

The Aesop store in Hong Kong features a striking design created by Boston-based architecture practice NADAAA. The interior features a curvilinear design and a ceiling covered with contoured wooden fins that filter the light and shape the geometry of the space. The way the light creates shadows and defines the ceiling is absolutely marvelous and helps enhance the overall inviting and warm atmosphere that the designers had in mind when creating the project.

When Assemble designed their new studio in Northcote, Australia, their goal was to create a low cost, flexible workspace with an inspiring and striking look. The main feature is the ceiling. It has a geometric design and is comprised of triangular folds or timber battens inspired by the art of origami.

The CDS Offices in Tokyo, Japan was a project by BAKOKO. The team completely transformed the workspace into a modern and sleek facility that includes a round central meeting room with an elegant timber frame and a spiraling ceiling that create a stylish atmosphere. This is where candidates typically arrive for private interviews so it was important to create a positive impression.

A new office space was recently designed by MkThink for The Nature Conservancy in San Francisco. The main priority was to allow the office to represent the organization’s appreciation for nature. The team created a series of custom features including a full-height planter wall and a topographic ceiling installation using local and reclaimed materials.

Welcome to Pizza Art, a beautiful restaurant in Kiev where the most impressive feature is the wavy wooden ceiling that only covered part of the interior. This asymmetry gives the space a particularly attractive look and was meant as a detail designed to enhance the overall welcoming ambiance and to give it a warm glow.

This is Corestaurant, a space designed by Modourbano Architettura and located in Milan Italy. It includes a professional kitchen, large tables and a ceiling covered with sinuous wavy blades made from a material based on wood fibers. It’s a flexible project designed to serve as more than a regular restaurant. It can also be used by non-professionals and was designed to encourage costumers to share their passion by becoming chef for a day.

The Oita Airport Lounge in Japan welcomes passengers with an impressive design that features an undulating wooden ceiling that comes down at the center forming a large sculptural column. It was a project by Japanese architect Takao Shiotsuka.

The Loducca Agency in Sao Paulo, Brazil may not have a wavy wooden ceiling but it impresses with a similarly designed exterior facade. Designed by Triptyque, the building is enveloped in a fluid wooden membrane that protects it from the sun and creates various visual effects when seen from a distance.