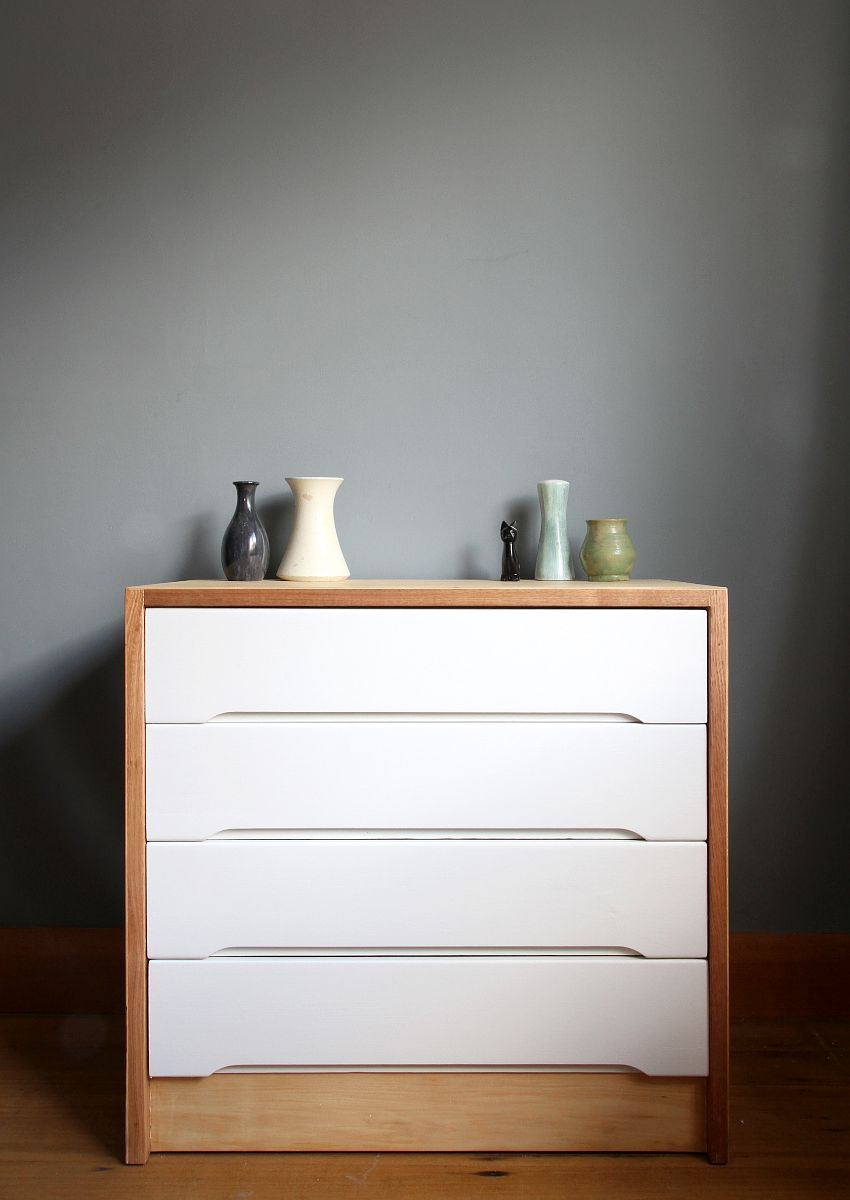 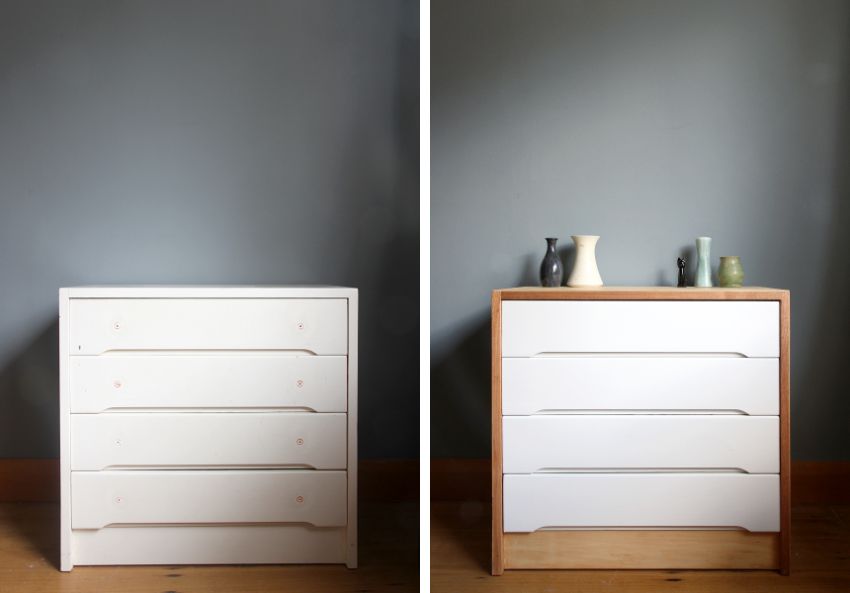 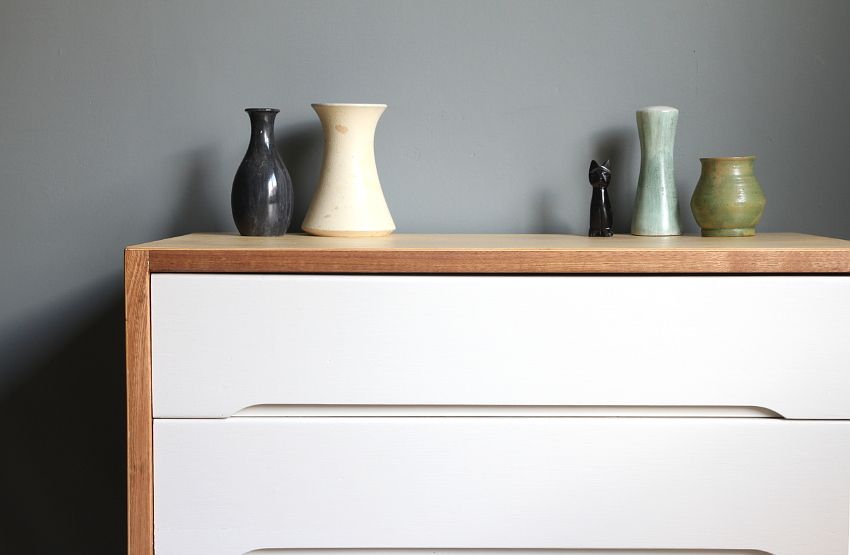 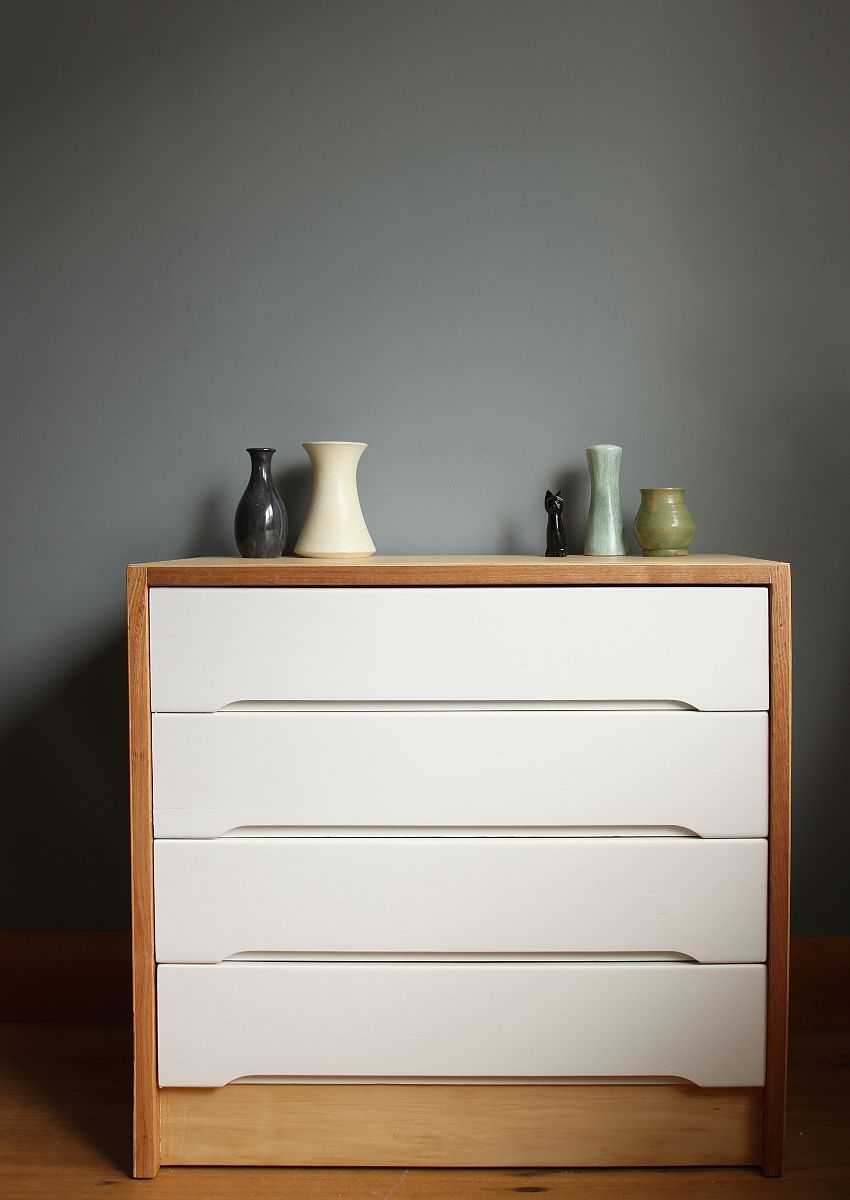 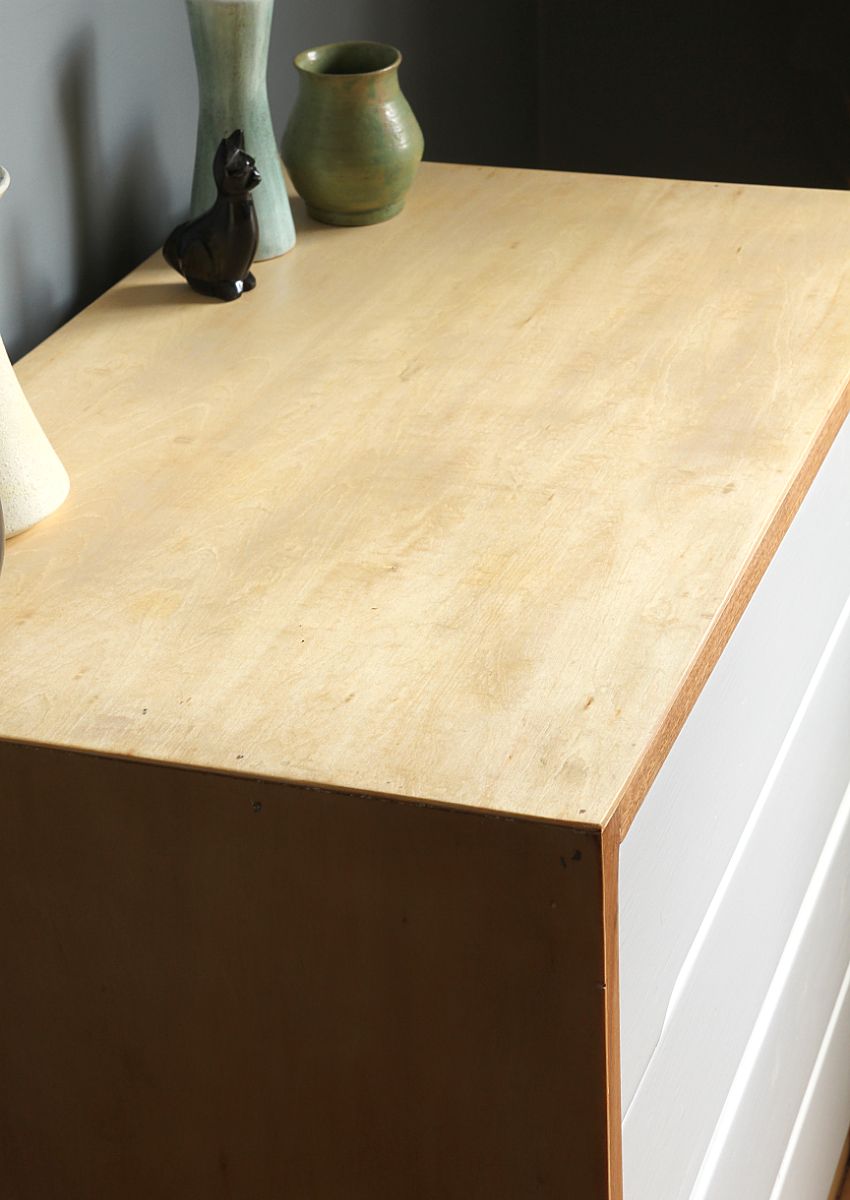 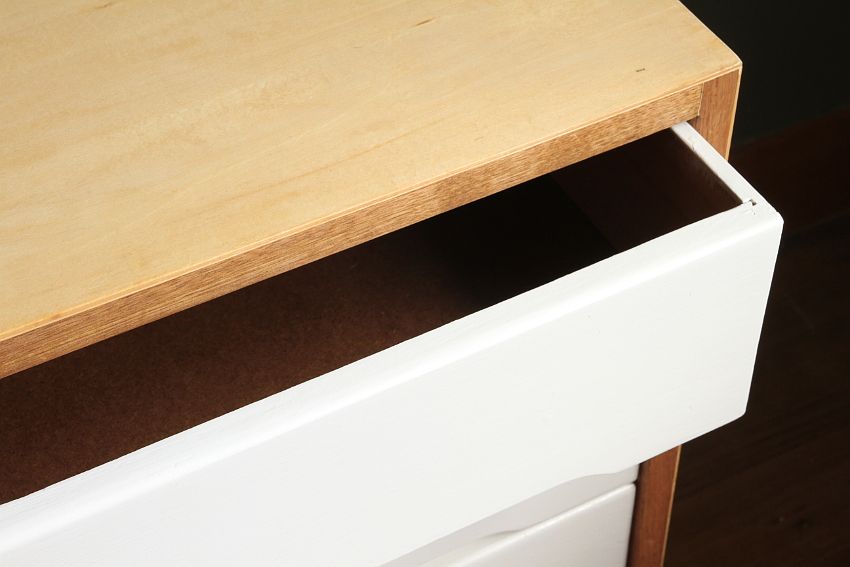 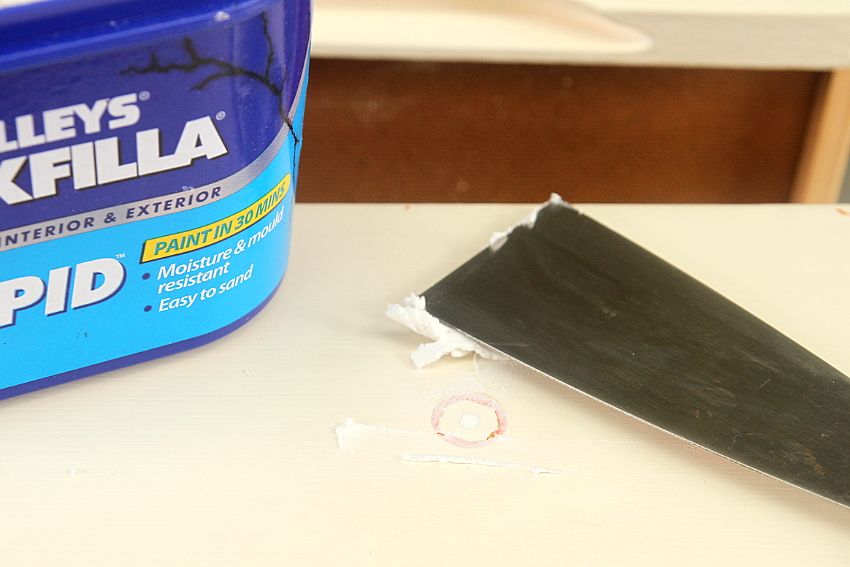 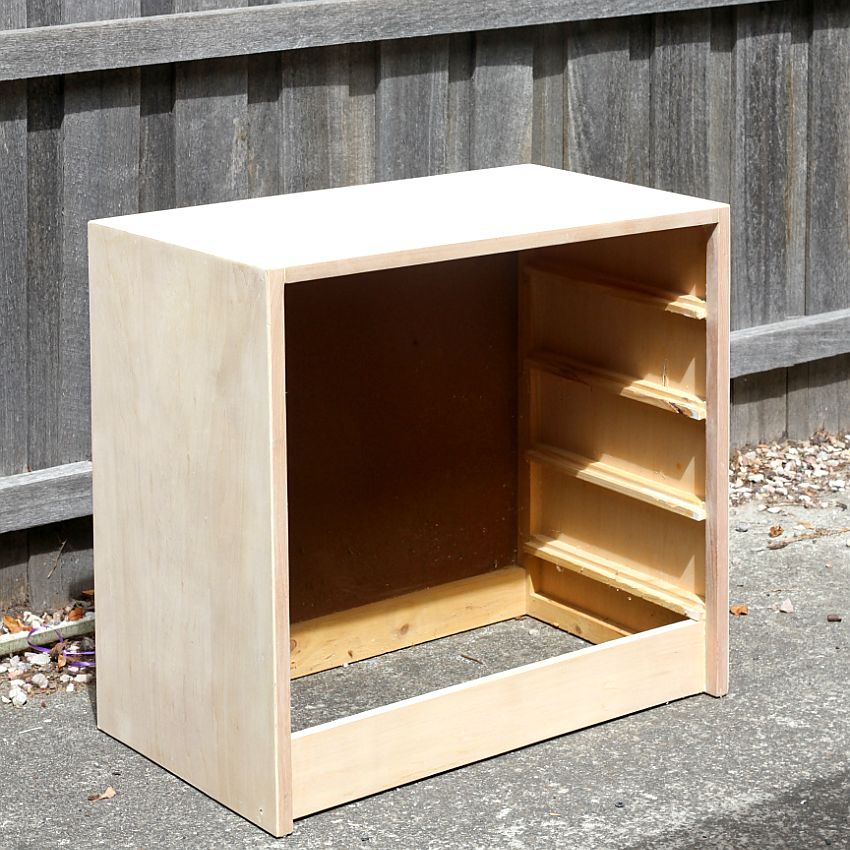 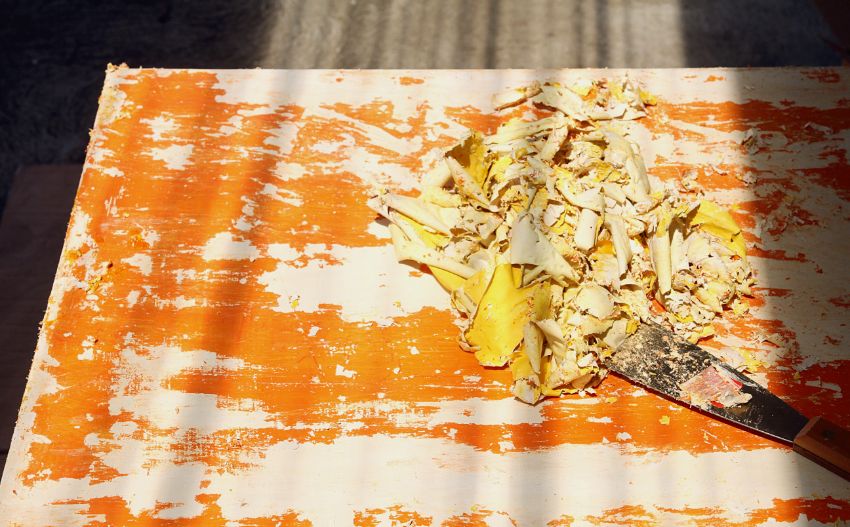 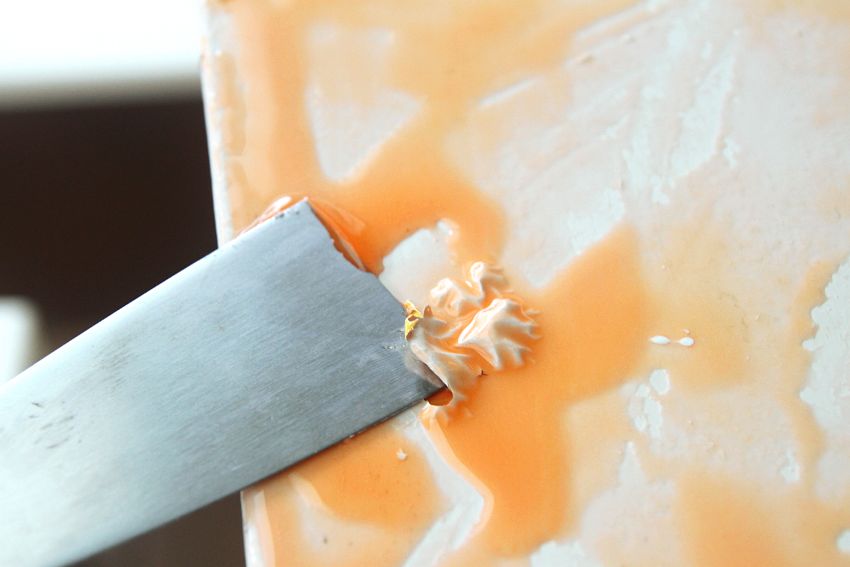 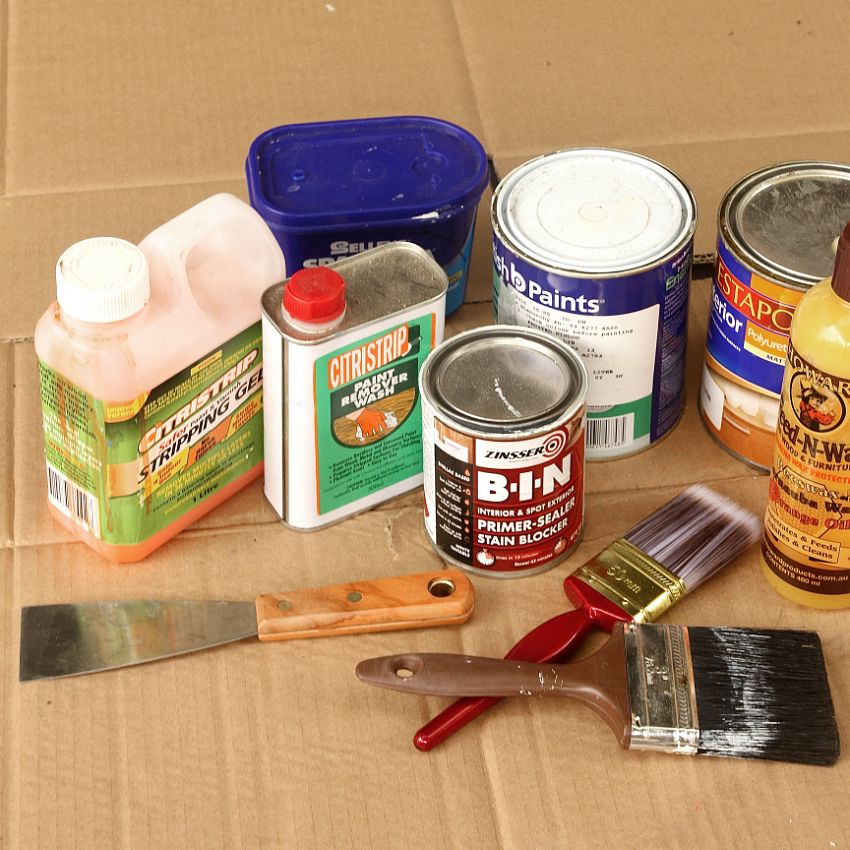 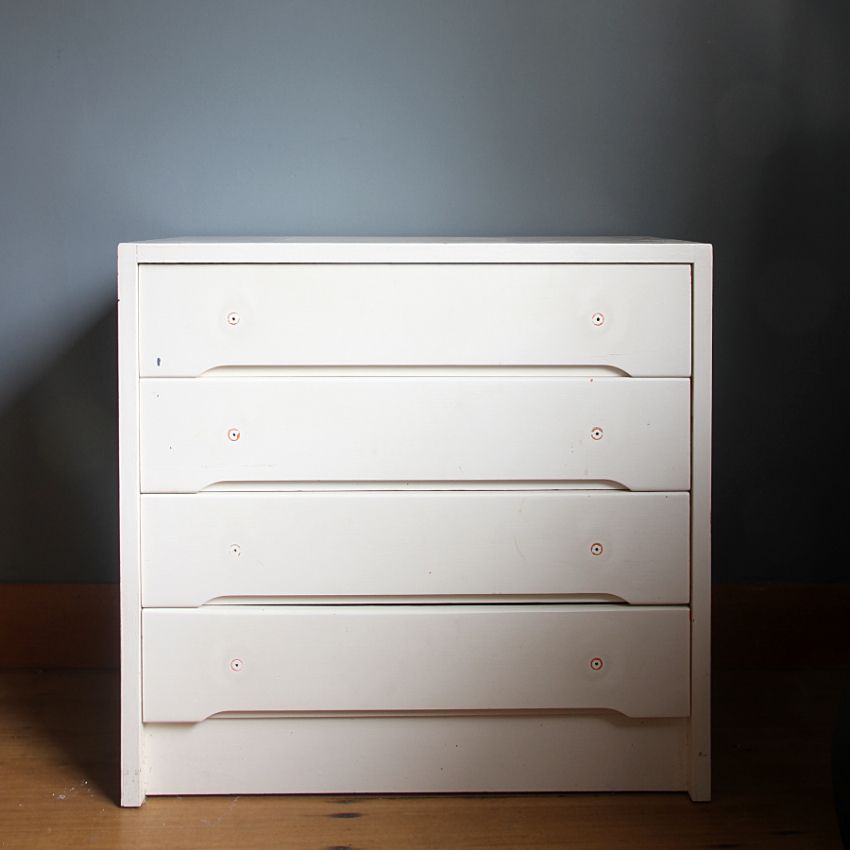 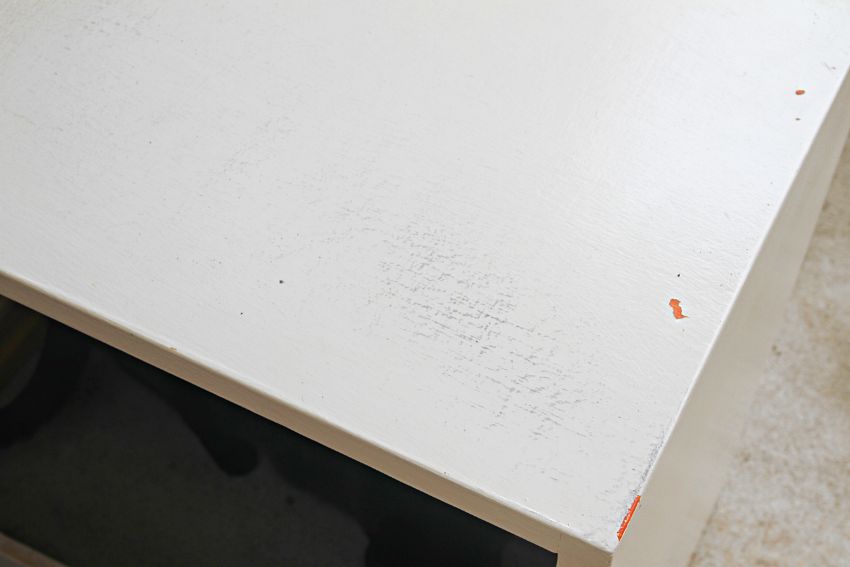 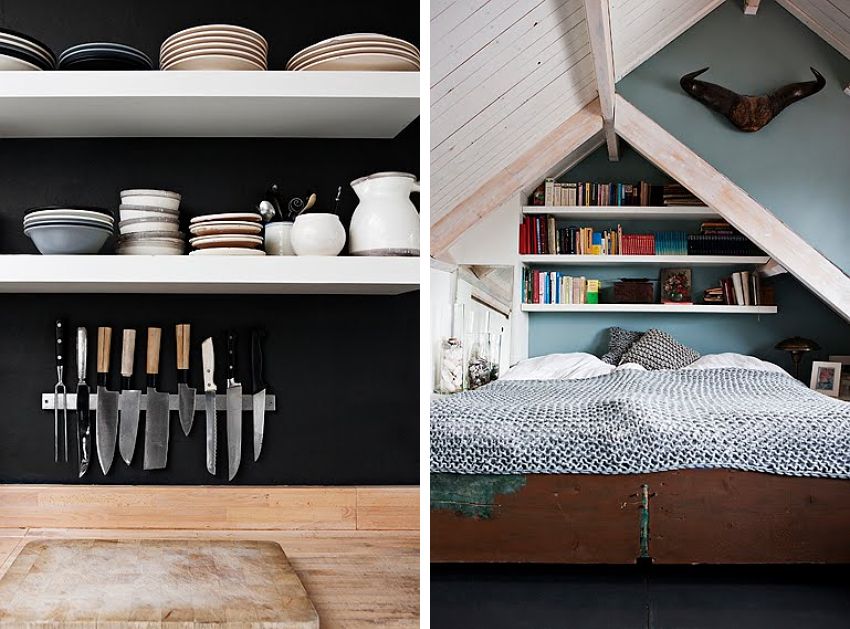 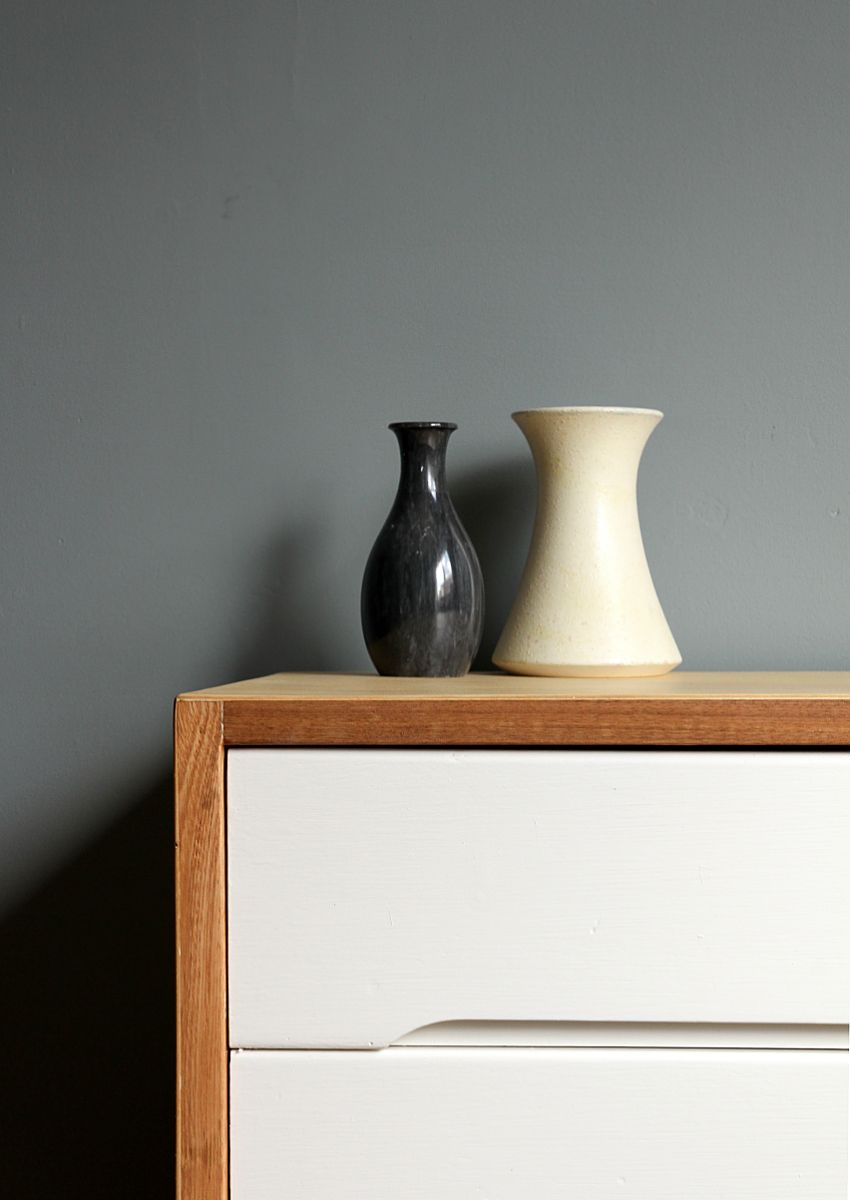 You’ll never know what you’ll find under the surface. With a little work, I took a plain dresser and gave it some Nordic flair.

Here’s how that went down! It didn’t look like much, but its simple, attractive pulls tipped me off that there could be potential lurking under its four coats of paint.

Scandinavian interiors are characterized by airy, minimal spaces with lots of white and timber. The timber adds warmth to spaces that could otherwise feel cold and sterile, while graphic art and painted accents bring in personality. Most of us outside of Europe know the influence of the Scandinavian style through IKEA. I might not live in a Swedish cabin somewhere in a snowy birch forest, but the homey, pared-down aesthetic still speaks to me.

My project dresser came with eight extraneous knobs (already removed in this photo) and several layers of paint. The dresser appears white in this photo, but in reality it was cream-coloured. I knew that exposing the pine timber underneath would complement the style of the dresser, as well as painting the cream drawer fronts a bright white.

Here are a few elements to look for in your furnishings, if you want a similar look:

And here’s the arsenal you’ll need to strip back and refurbish a piece of furniture:

I set the drawers aside and got to work stripping the shell. Conventional paint stripper works fast and takes off several layers at once, while citrus strippers like Citristrip are less effective but also less toxic to deal with. I applied a liberal coat of Citristrip and let it do its thing for the next couple of hours. Once the paint bubbles and rises up from the surface, it’s ready to scrape off.

It took three separate applications to get through all of the paint. The last application was just to get the very last bits off the timber. I had no interest in sanding through layers of paint, especially since I had no idea if the paint was old enough to contain lead.

After scraping off all the paint, wipe down the entire thing with a solvent that will remove the paint stripper residue. Citristrip has their own branded wash, which I don’t mind using — it smells nice and it does the job. Methylated spirits will do the trick for conventional paint stripper.

Once it dried, I quickly sanded the shell using an orbital sander and 120, then 240, grit pads. The timber was starting to clean up nicely!

Before applying primer, I filled in a few holes and dings with quick-setting spackle filler, then smoothed the patches with a fine 400-grit paper. As for the primer, I used Zinsser 1-2-3, which is shellac-based. It sticks to melamine and other glossy surfaces, oil-based and water-based alike. If I don’t have to spend any of my precious hours on earth trying to sand back high-gloss paint, I’ll take it.

I gave the drawers two topcoats in a white semi-gloss enamel. I prefer water-based enamel because it doesn’t turn yellow over time, but you do have to move quickly so that you don’t get highly visible brushstrokes or sticky, overworked areas. I let them dry for a few days — water-based enamel also takes longer to fully cure — and then they were ready to go back into the dresser!

There’s many ways to go about varnishing timber, but in this instance, I applied a coat of matte polyurethane for durability and protection, and then a coat of Feed-N-Wax for shine. I like how wax coatings give timber a silky feel.

Another option you could try — which fits in well with today’s Scandinavian theme — would be using the (super cheap!) BEHANDLA furniture oil or beeswax polish from IKEA. It’s a mix of linseed oil and wax, and it won’t darken or discolour timber. The only downside is that it could take quite a few coats to get a proper varnish – softwoods like pine soak up a lot of oil. A matte poly layer prevents you from emptying half of the can into your furniture.

Before and after dresser makeover:

Timber + white is a winner! The deep blue-grey paint provides a contrasting backdrop, making the dresser stand out. Quirky or meaningful objects bring a personal touch.

Here’s a couple of before-and-after photos, because those are always fun!

With an eye for furniture with good lines and some elbow grease, you can bring a cast-off piece of furniture into the 2010s with style. What would you update if you could?