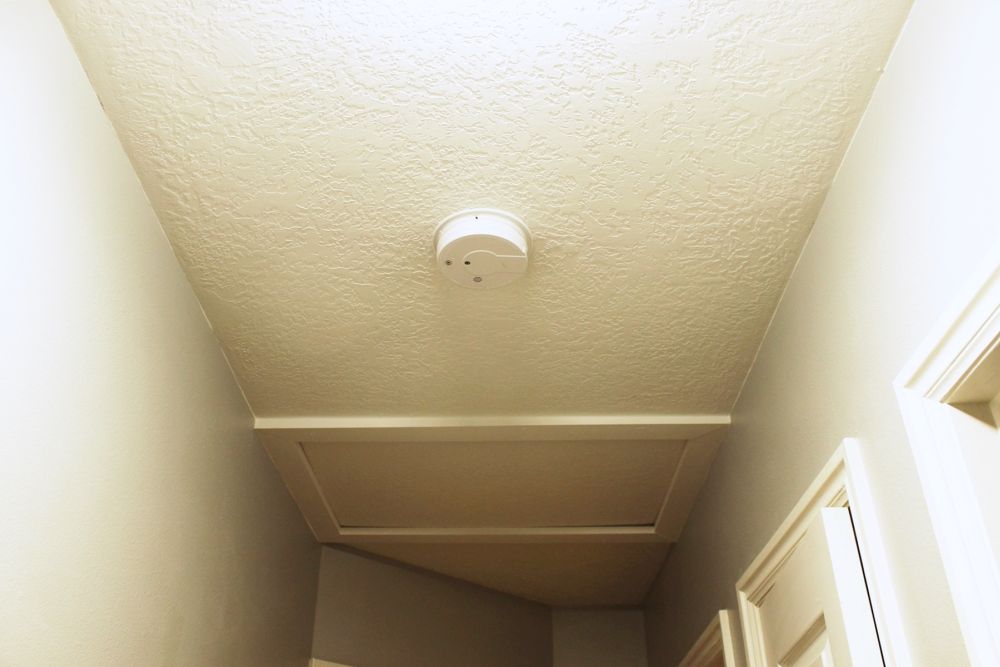 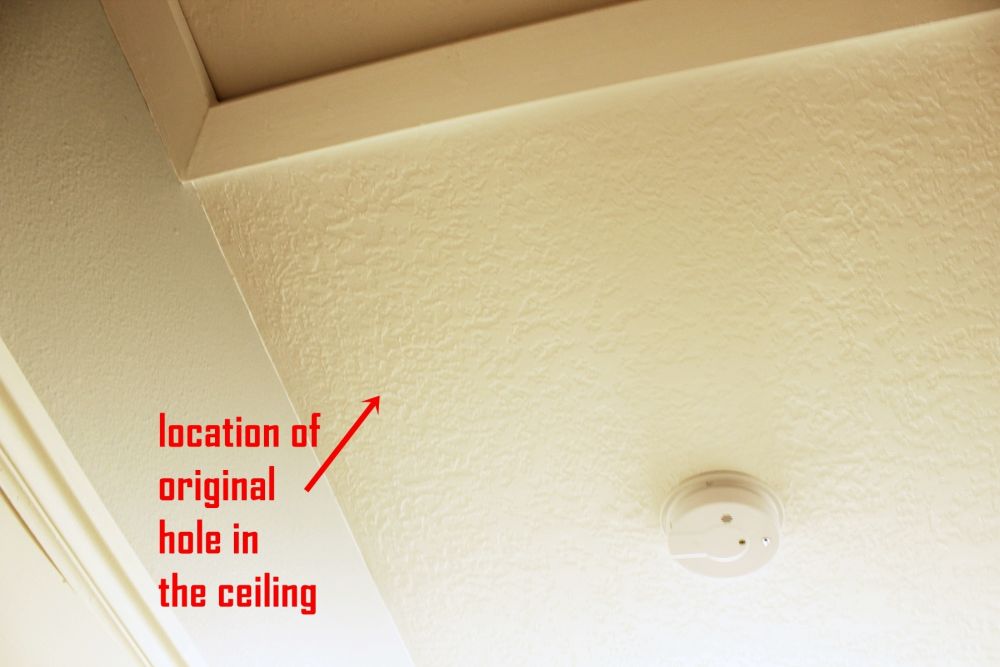 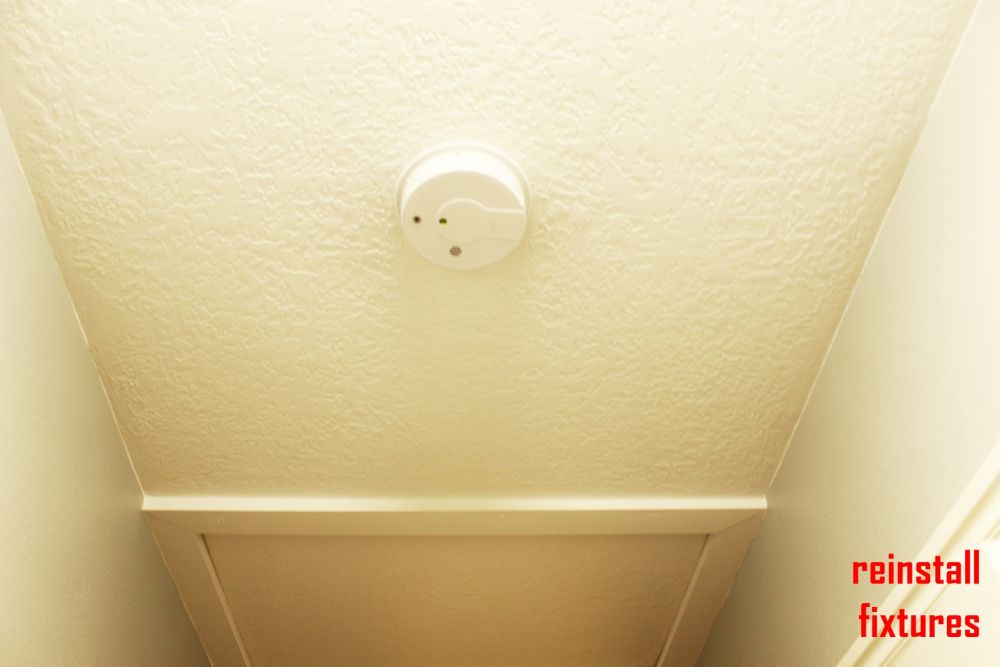 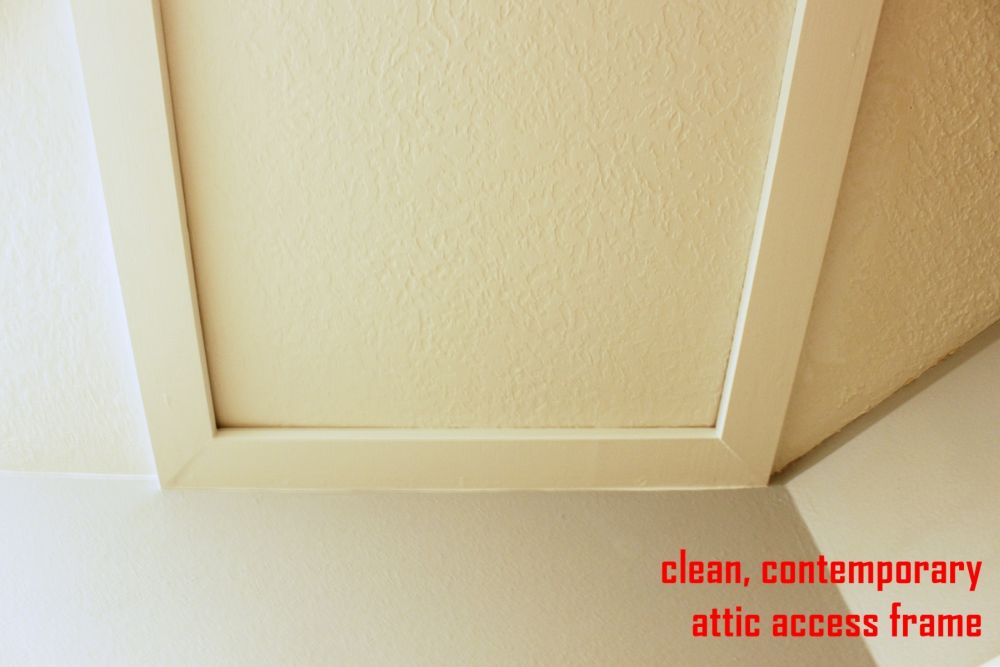 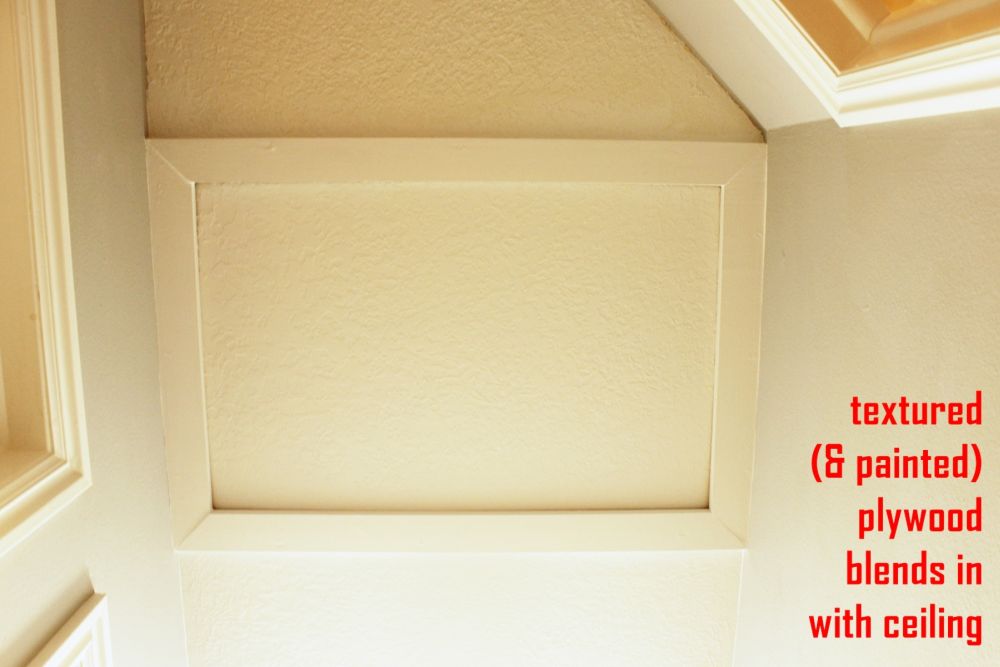 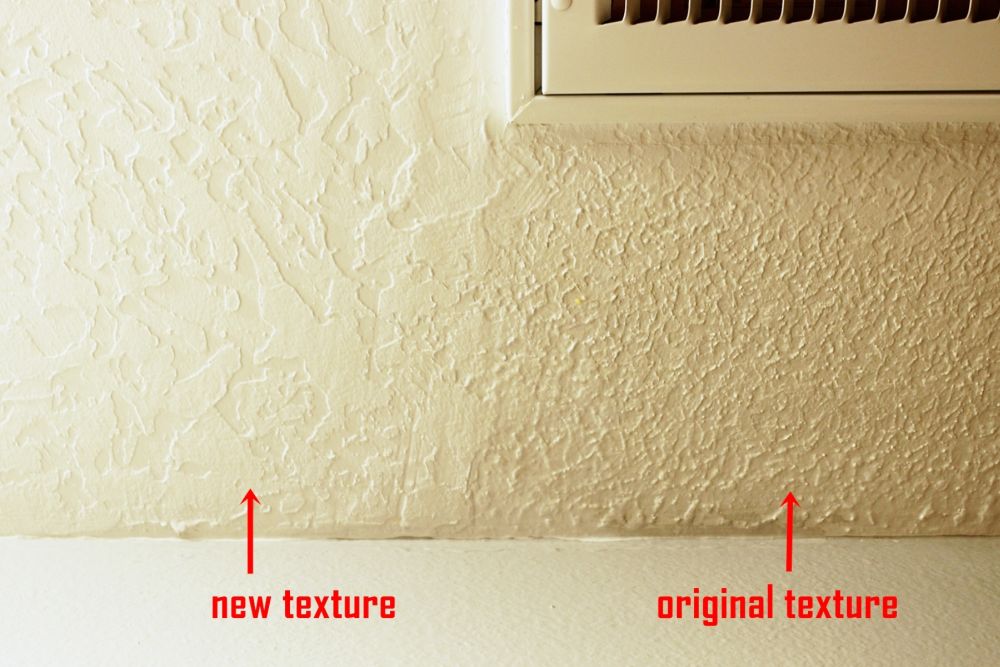 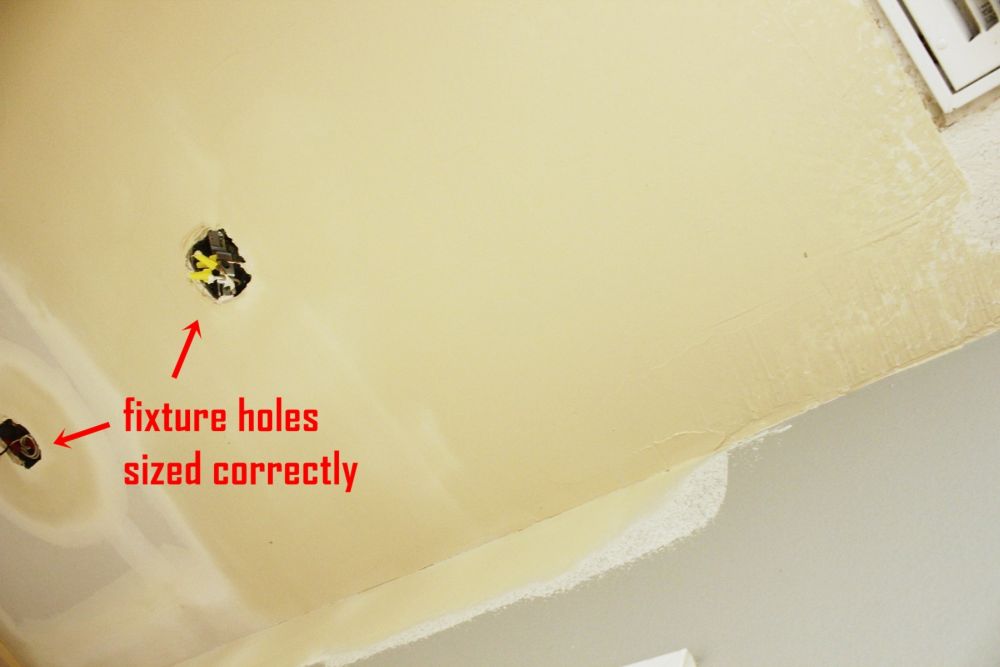 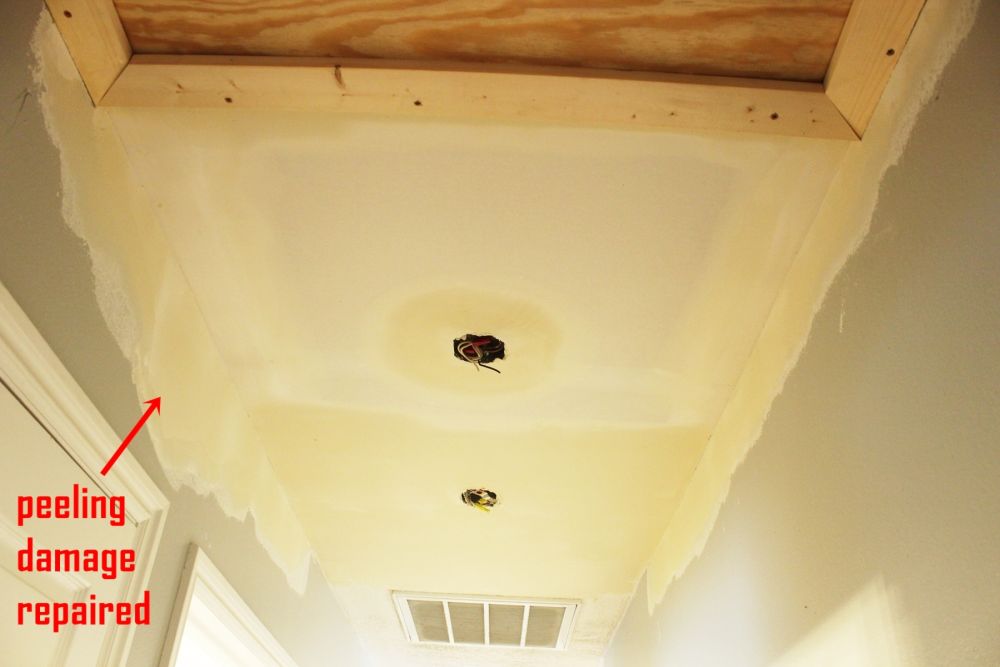 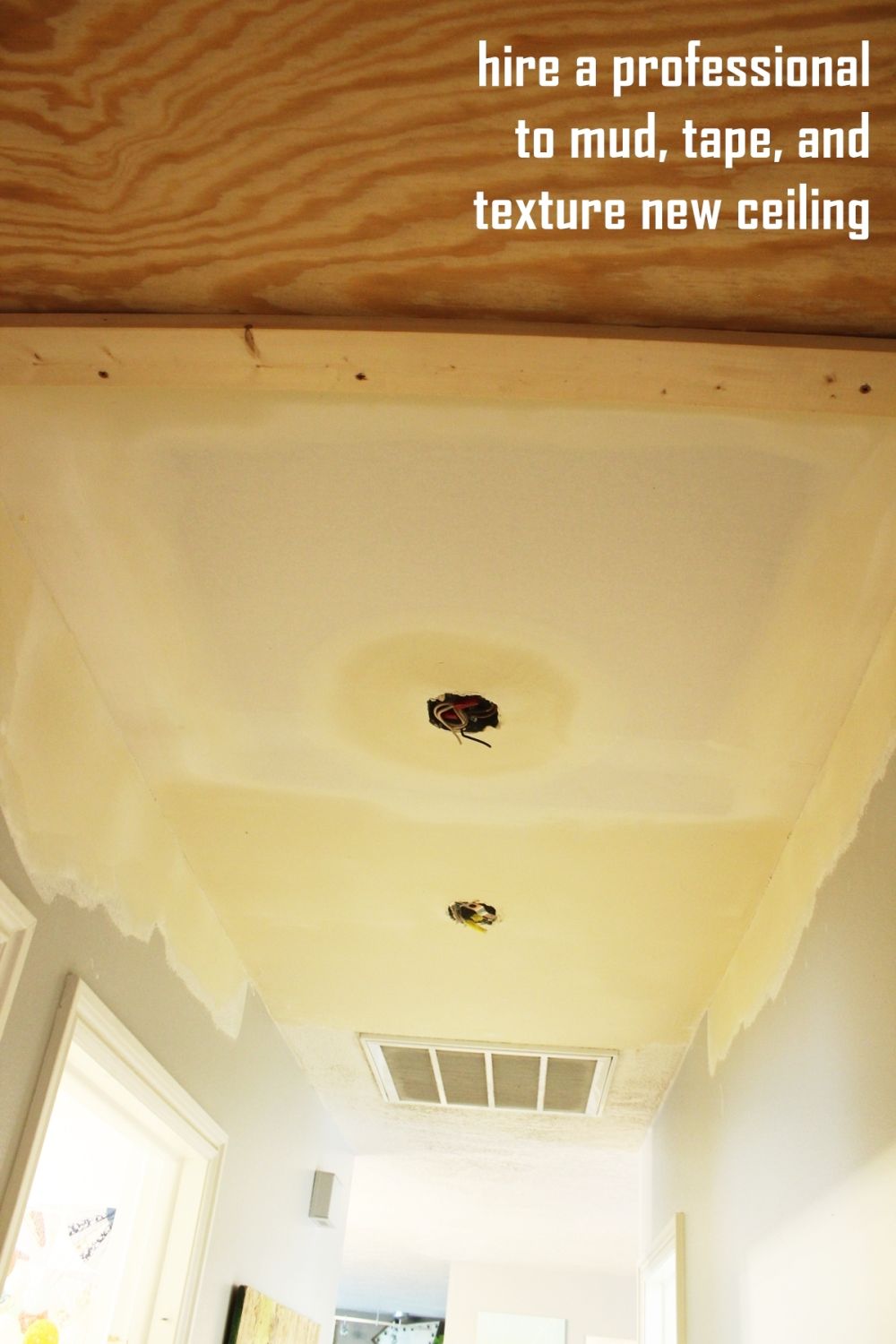 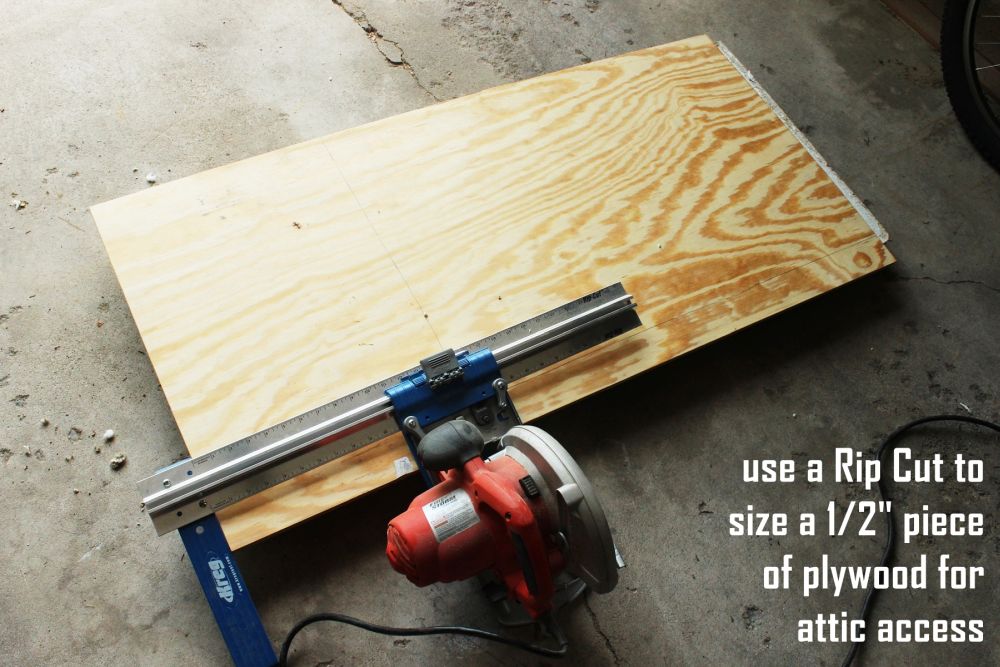 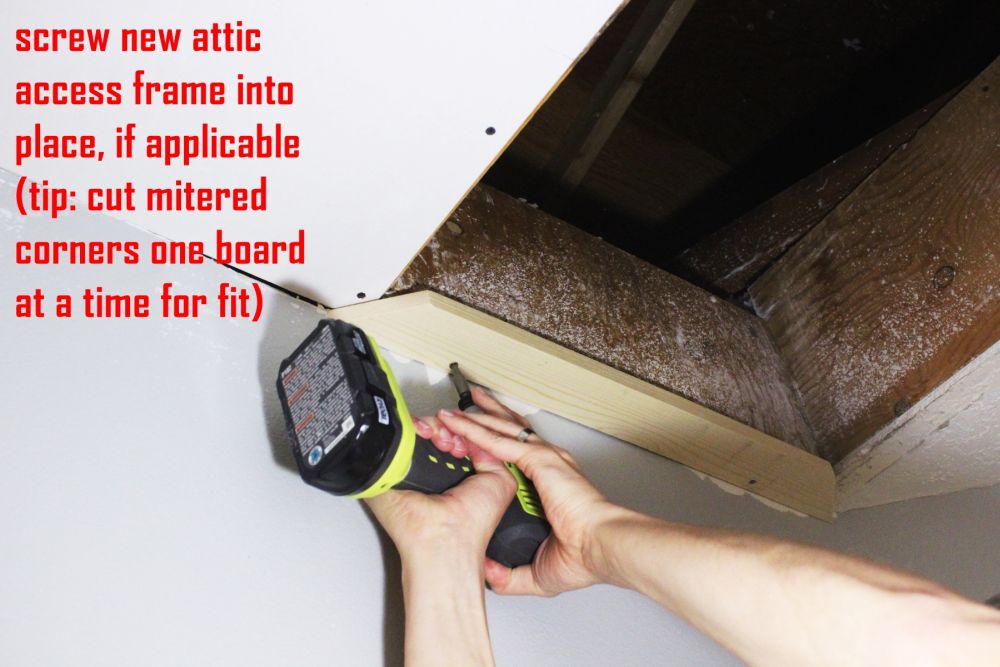 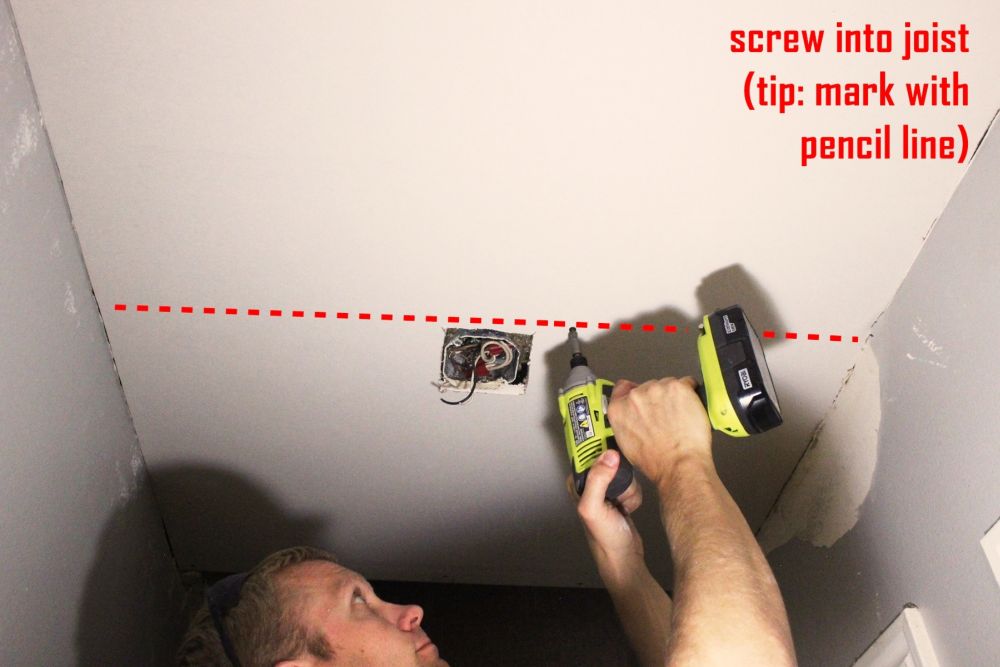 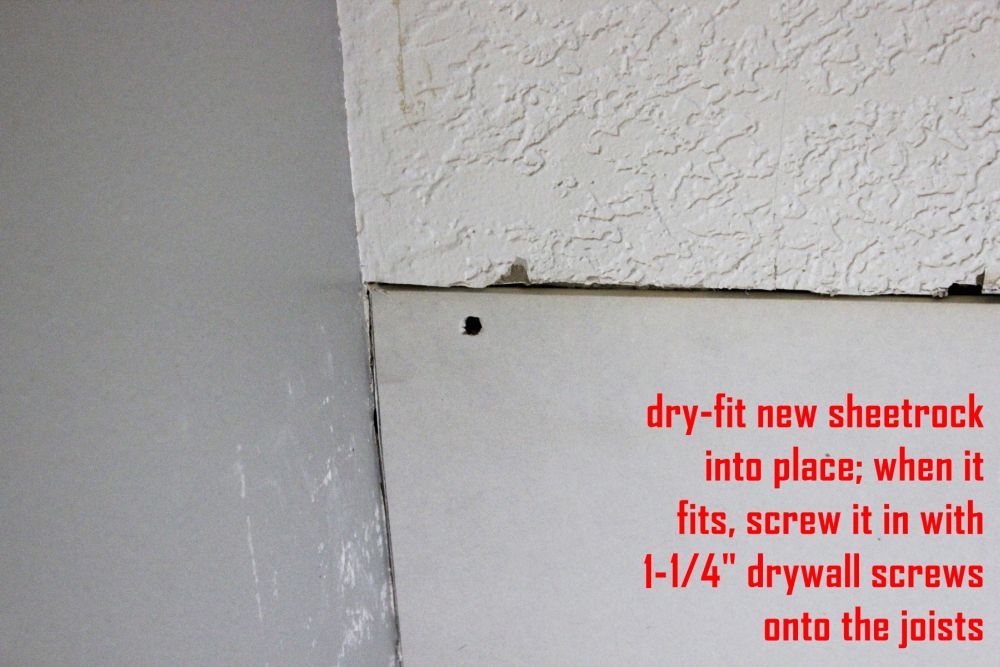 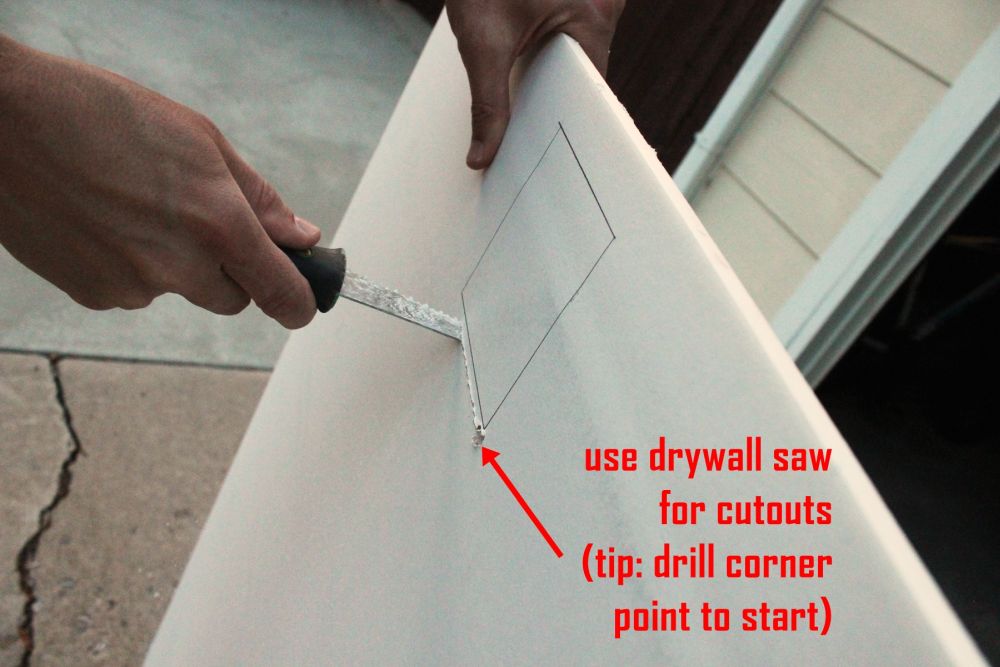 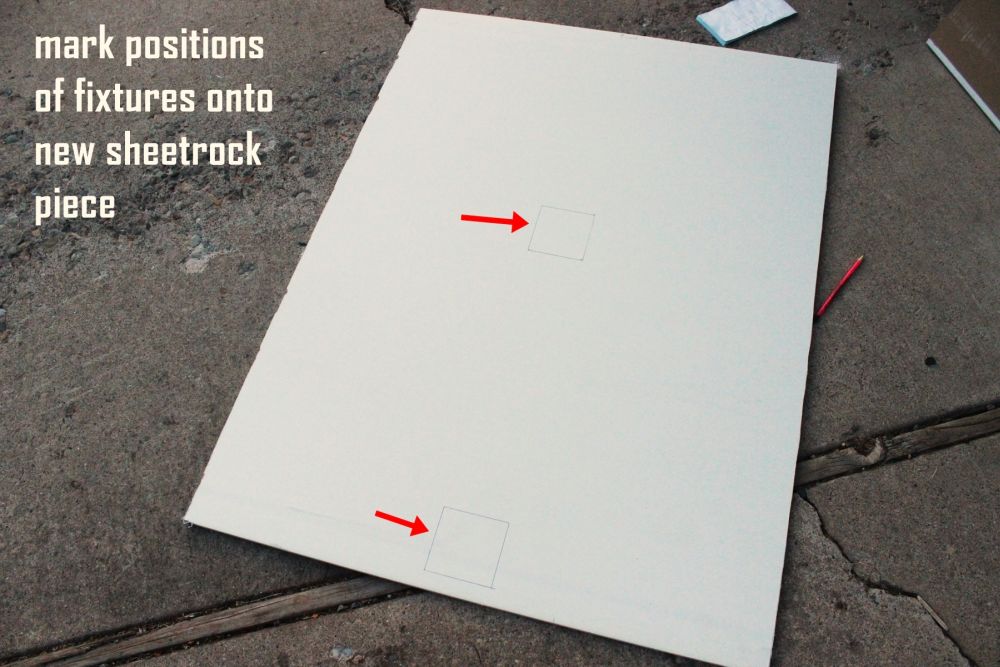 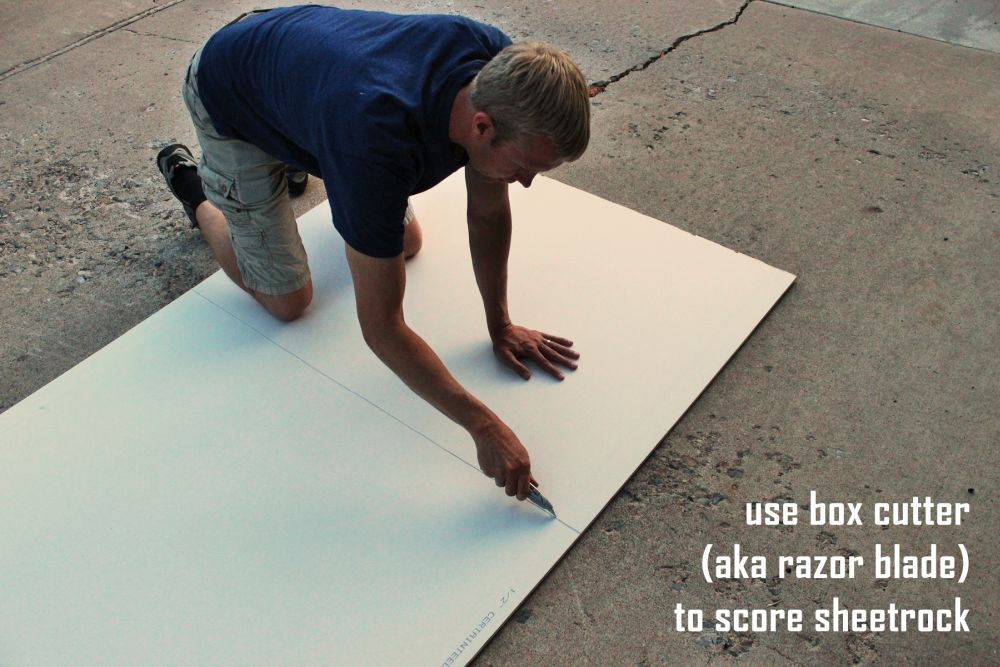 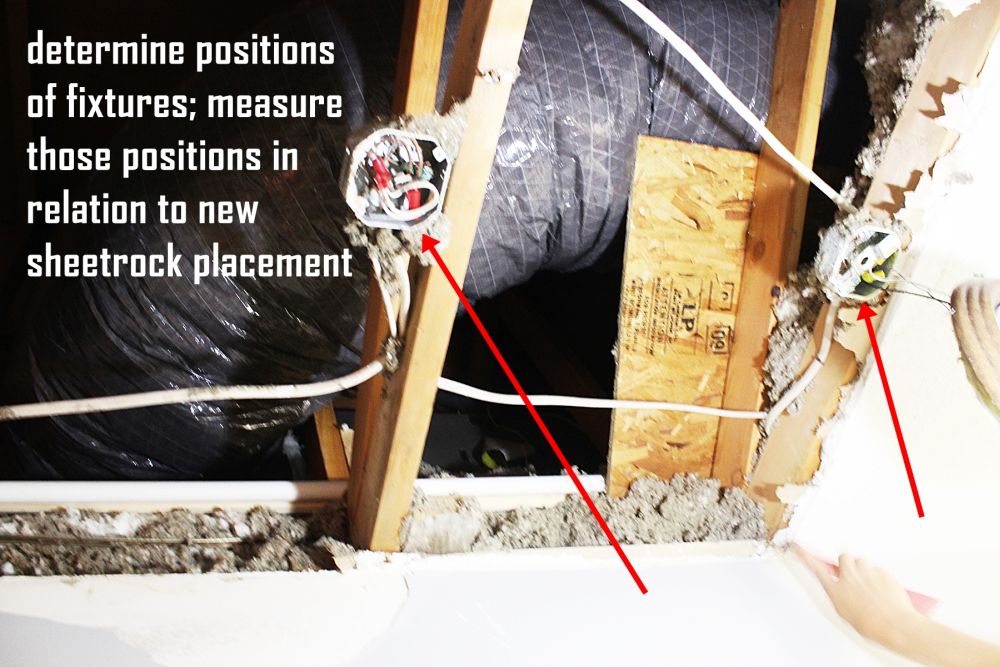 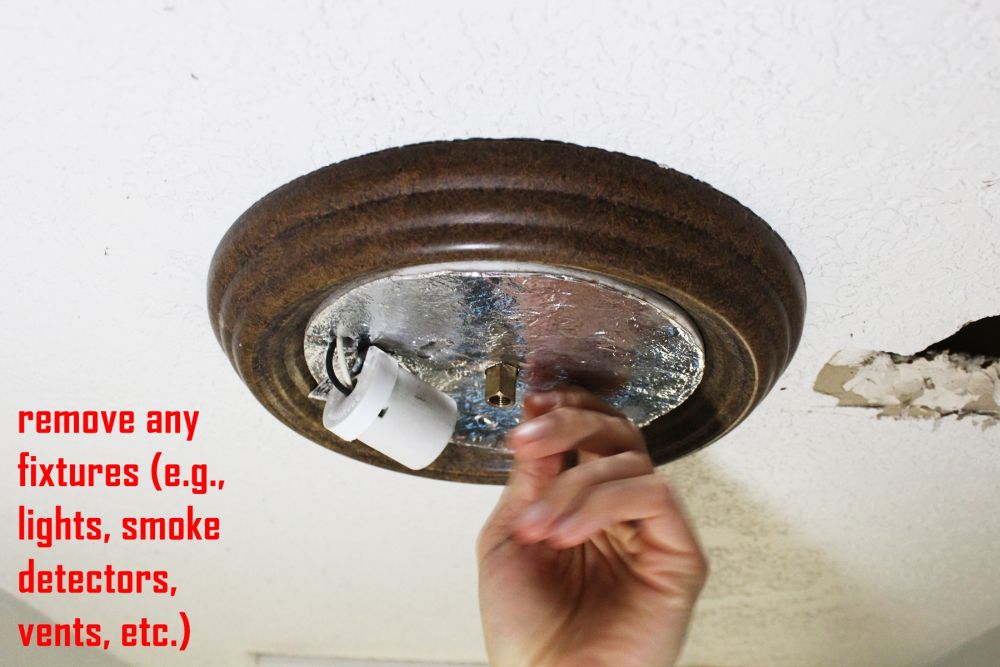 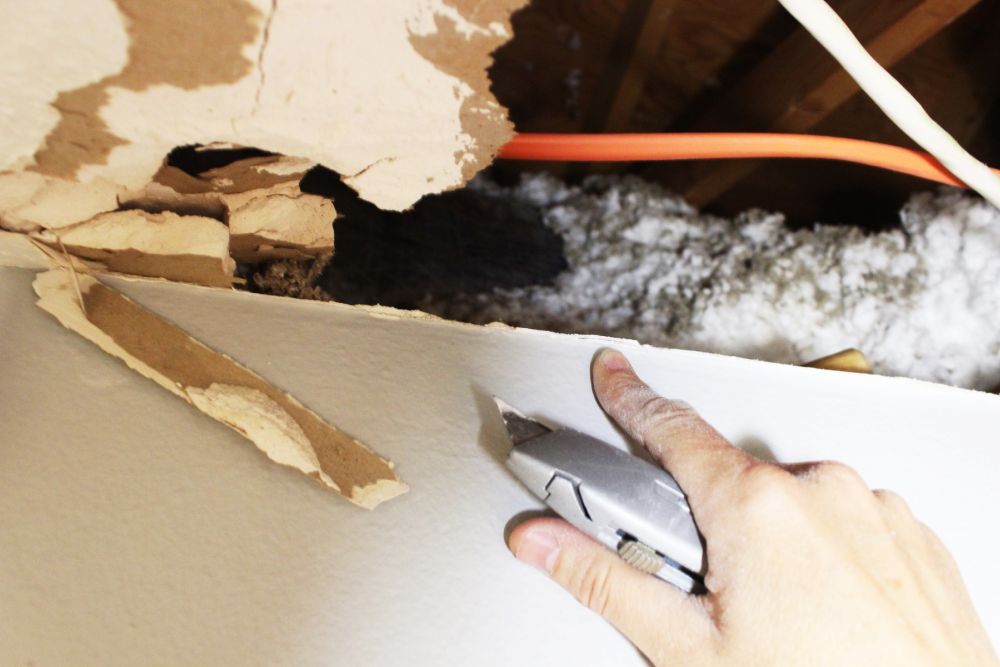 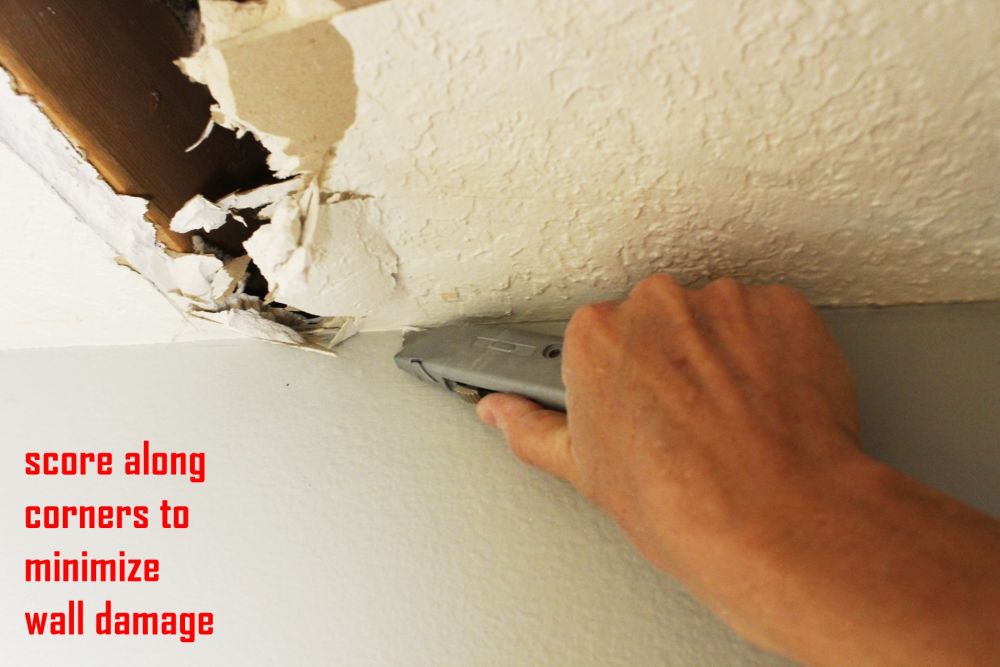 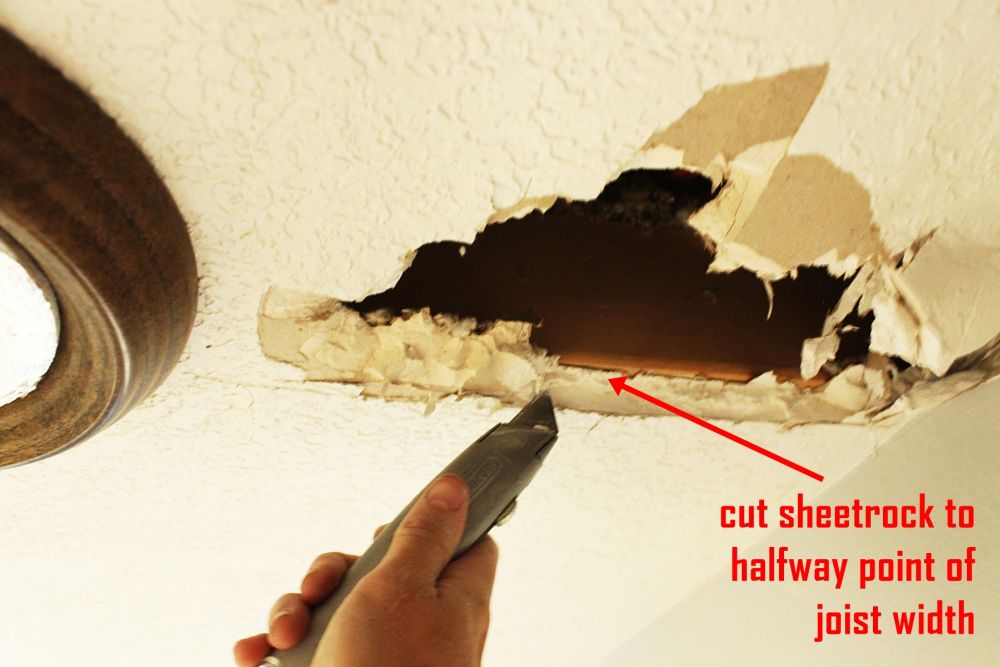 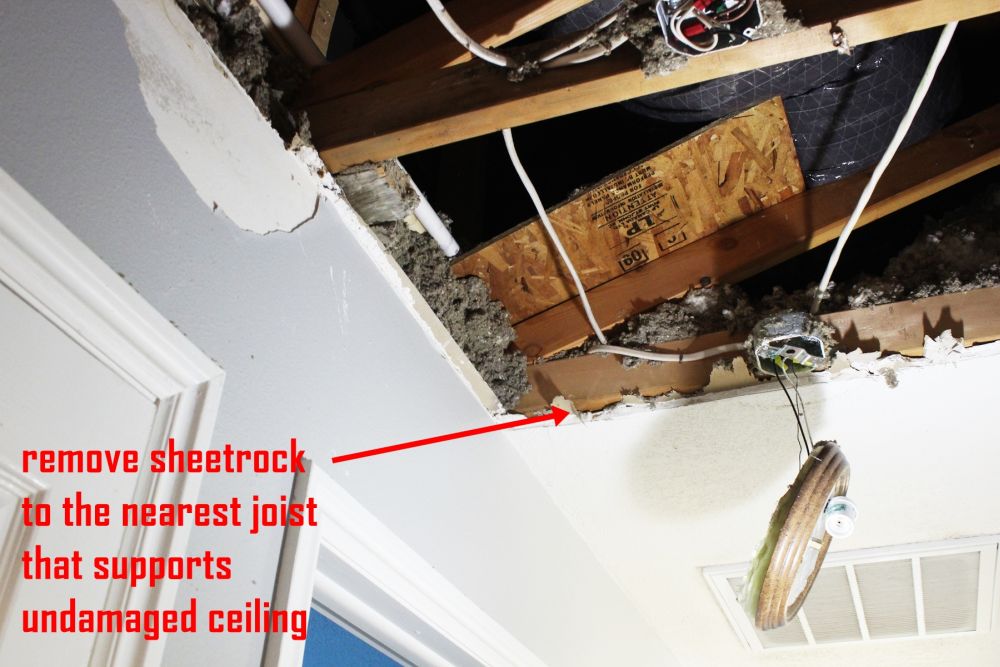 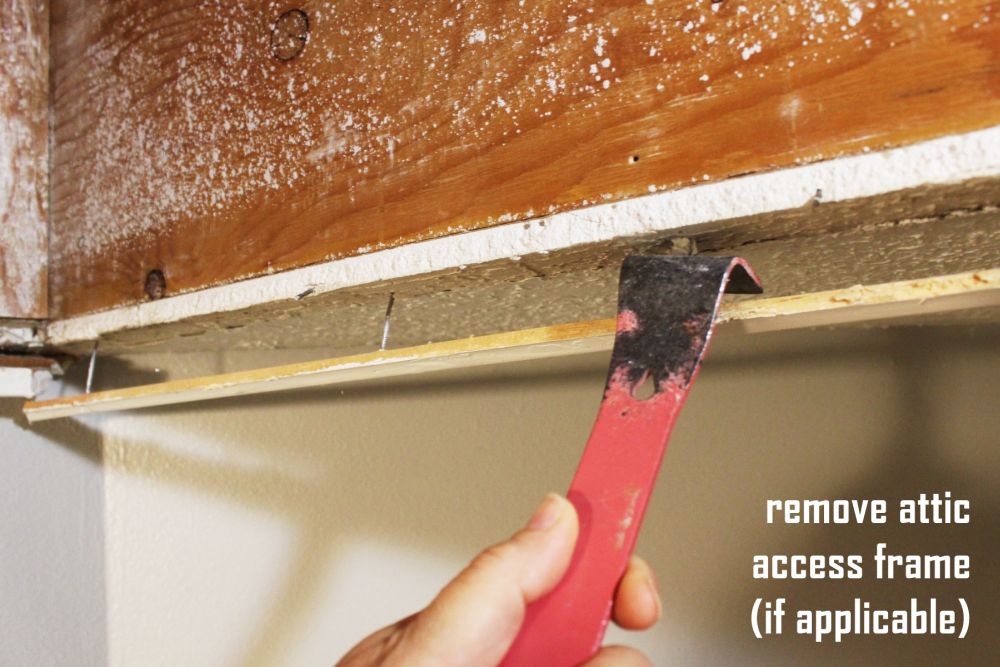 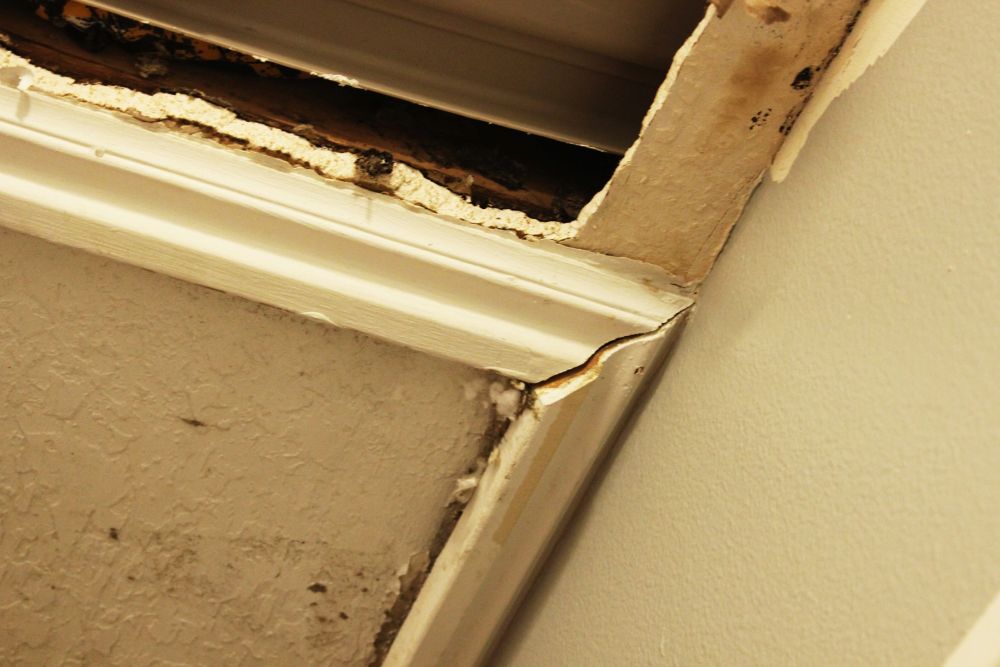 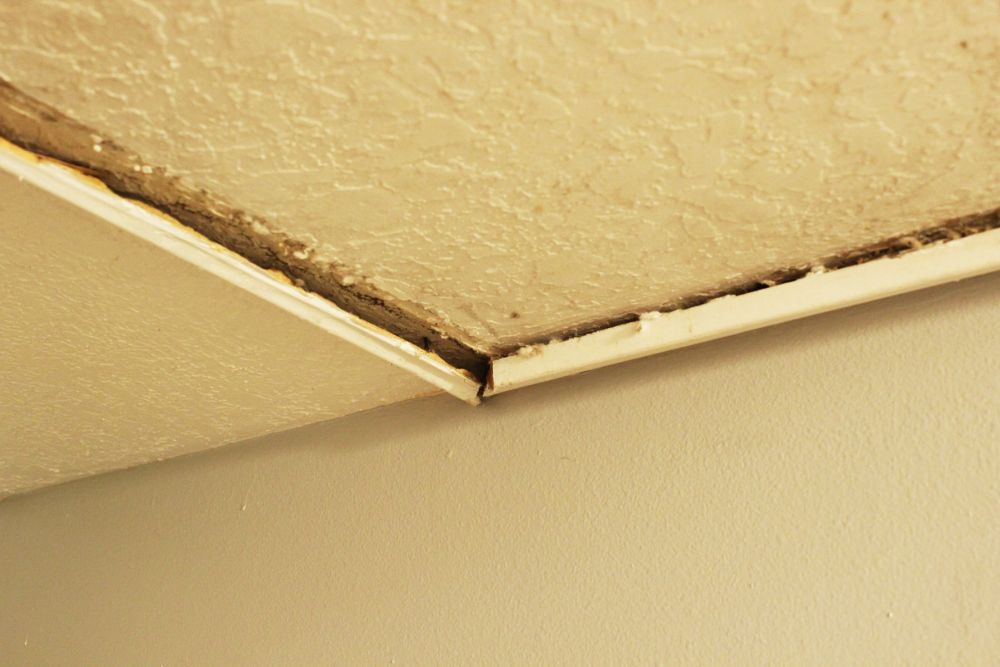 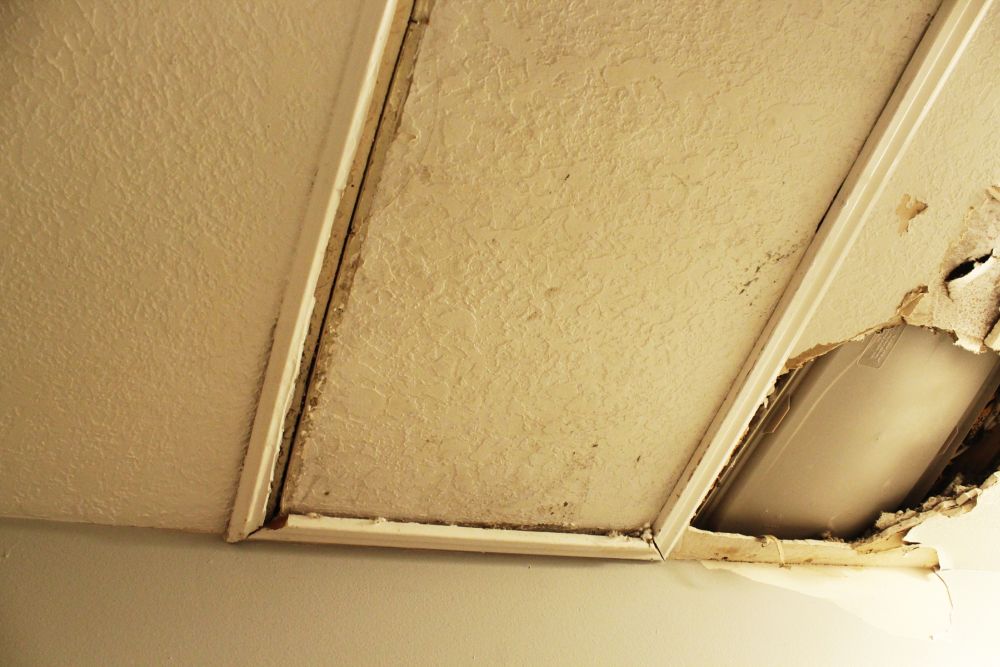 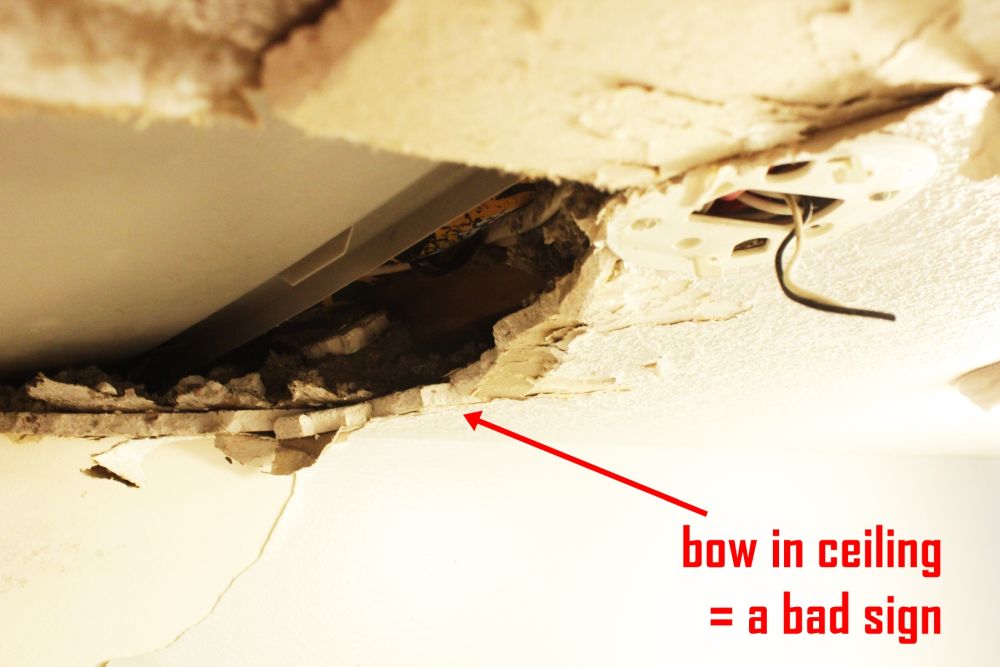 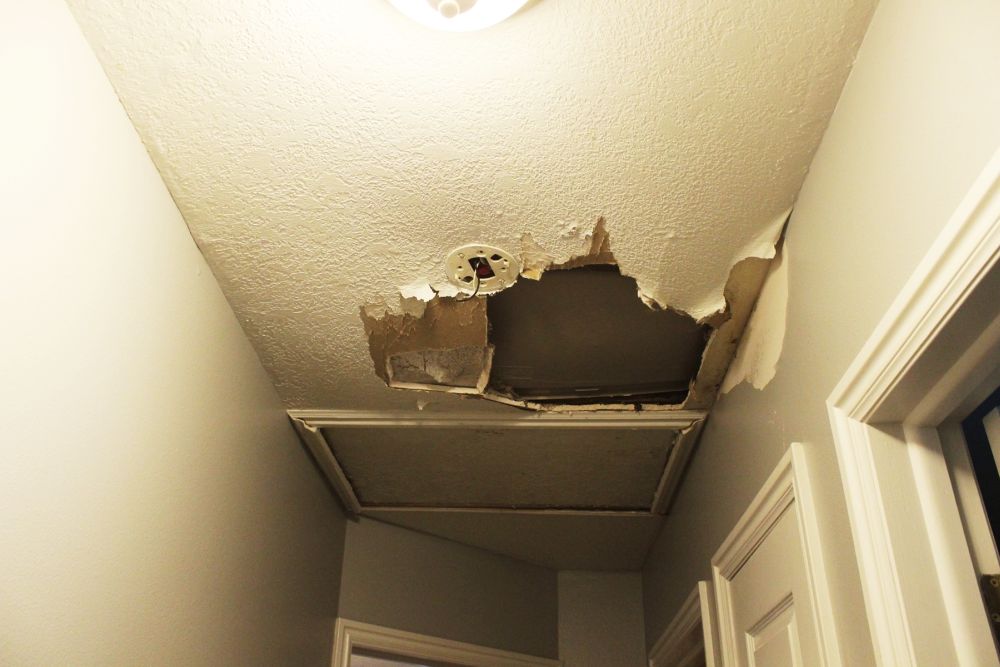 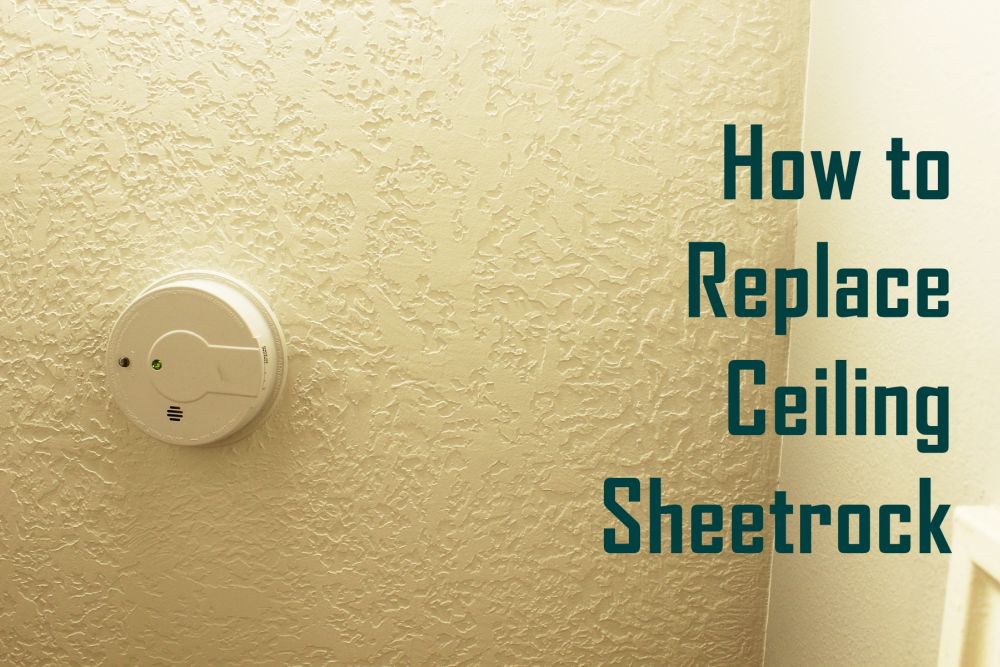 If you’re a homeowner, there is a chance you’ll need to replace some drywall at some point. Walls are simple enough, but what about ceiling sheetrock? If you ever find yourself needing to replace ceiling sheetrock, you might find the following step-by-step tutorial helpful. This particular instance involves the attic access point as well, which may or may not be applicable to your situation.

If your ceiling is damaged (this examples involves a cracked PVC pipe in the attic, which warped the sheetrock and resulted in a ceiling cave-in), you’re going to need to replace it.

In this instance, there was not only a hole in the sheetrock, but there was also quite a bit of warping in the surrounding ceiling sheetrock. That would have to be replaced as well.

In addition, the hole occurred right next to the attic access point, which was in bad shape to begin with.

The attic access frame was some old trim pieces that had, over time, split right down the center.

The original access point was not only ugly, it was dangerous as well. That will be included in this ceiling sheetrock replacement.

To begin repairing the ceiling sheetrock, you’ll need to remove everything that will be replaced. This includes the attic access trim. Before you go any further, you’ll need to go up into the attic and remove any insulation from the sheetrock area to be replaced. If you don’t do this, you’ll have an even bigger mess, as all the insulation will fall down when you remove the entire sheetrock section.

After the insulation in the attic has been taken care of (we just tossed ours to the sides so it could easily be brought back over the new sheetrock after replacement), it’s time to figure out just exactly where you’ll be replacing the ceiling sheetrock. Anytime you replace drywall, you need to cut to the next joist (or stud, in the case of a wall) after the drywall damage, but not an inch beyond.

Use a box cutter to cut along the center point of the joist. This will allow you to use drywall screws to secure the newly cut edge of the original sheetrock, if necessary, as well as provide a secure spot to screw the new sheetrock to.

If applicable, you’ll also want to score (or cut, if it’s in the center of a large piece of sheetrock) along any corners with a box cutter to keep the paint from peeling off the wall as you remove the ceiling sheetrock.

Notice that this scored edge has a much cleaner look than the large patches of paint that ripped off with the original ceiling’s cave-in.

Remove all fixtures from the area. This example includes a light and a smoke detector. Other fixtures might include vents.

Here, the ceiling sheetrock has been removed. Although the hole was just a little more than a foot in diameter, the sheetrock to be replaced is a 3’x4’ rectangle, based upon the most logical replacement areas. In this space, measure and mark the positions of any fixtures that you will need to cut holes for in the new sheetrock piece.

Measure, mark, and cut with a box cutter the new sheetrock piece.

Measure and mark the positions of any fixtures, if applicable. These are usually 4” squares, although you’ll want to double check what you have in your ceiling to make sure the hole you cut is the right size and shape.

Use a drywall saw to cut out the holes. You may find it useful to drill a hole in a corner of your fixture marking, so you have a place for the saw to start.

Dry-fit the sheetrock onto the ceiling, make any adjustments you need, then use 1-1/4” drywall screws to attach it to the joists. Take care not to screw down too hard; you want the ends of the original sheetrock and the new sheetrock to align horizontally (e.g., match in flatness). This will make for a much more seamless transition when it comes time to mud and tape the ceiling drywall.

If applicable, once your new sheetrock is in place, it’s time to replace the attic access frame. This example uses 1×3 board, with mitered corners for the frame. Take care to leave about 1” overhang (toward the center of the access point) so the access point plywood “door” can rest on the frame.

It’s helpful to cut one piece to start, then measure and cut the next piece and install it, then move onto the third. (As opposed to cutting all four pieces at once.) Be sure the wood screws attach securely into a joist or 2×4 frame of some sort; they won’t last if the frame is only secured to ceiling drywall.

Use a Kreg Rip Cut attachment on your circular saw to cut a 1/2″ plywood board to size for your attic access, taking care to account for the 1” overhang on all sides of the trim so the plywood is big enough to rest on that overhang.

Depending on the size of your ceiling sheetrock, we recommend hiring a professional to come take care of the mudding, taping, and texturing. It’s quite affordable, and the benefits of having a professional do it easily outweigh the cost.

For one thing, the job gets done quickly with a professional. Any wall peeled paint or other damage will get taken care of, and the wall will be restored to its original state.

A professional drywall installer will also be able to easily and accurately size the fixture holes if your cutouts don’t line up precisely with the fixture mount.

And a professional drywaller will get the new ceiling texture to match the original texture much better than the average DIYer. Although it probably won’t be precisely the same, it’ll be pretty close. With another coat of ceiling paint on that old texture, I think the transition will be pretty smooth.

We had the professional also texture the access point plywood “door” just as he did the ceiling. When painted, it created a seamless look and feel through the hallway.

We like the clean, contemporary look of the attic access frame now. Simple lines match our home’s aesthetic much better than split curvy trim pieces, frankly.

After priming and painting the ceiling and walls and letting them dry, it was easy to reinstall a new light and smoke detector.

Hard to believe that a few short days ago, we had a gaping hole in our ceiling right here. The new ceiling sheetrock looks like it’s been there forever.

We hope you find this tutorial helpful for how to replace ceiling sheetrock. Good luck with your efforts, and, as always, use care and good judgement in your DIY building adventures. Safety first.