Whenever you’re feeling in the mood to make change something about your home’s interior design, you can always focus on some simple furniture transformations. For instance, you can give your old nightstand a makeover and this way change the ambiance in the bedroom. A small nightstand may not seem like a very important element in a large room but its impact on the décor and atmosphere of the room is stronger than you think. Let’s see how you can transform a simple IKEA nightstand into something unique that perfectly reflects your style.

As you probably know, the IKEA Rast is extremely versatile. It can be used as a dresser but, given its reduced dimensions, also as a nightstand. You can get a plain one from IKEA and make it match your style. For instance, give it a modern-industrial look just as shown on Simplydesigning.porch. It’s a fairly simple project for which you don’t need a lot of supplies.

The same simple dresser can also be transformed to look chic while maintaining its toned down and simple look. A really great example is offered on Diyweekendwife. You can transform the dresser to look like in the example for just under $45. So go ahead and buy one of these dressers, assemble it, stain it and then add some new hardware.

Another cute idea suggested on Loveandspecs is to put some quirky knobs on the dresser after staining or painting it. You can put matching knobs on all three drawers or you can alternate several types. If you can find six different models than go for it and make each knob unique.

A little bit of creativity can go a long way. For instance, you don’t even have to repaint your IKEA nightstand or to change its hardware. You can just use a paint pen to draw a geometric pattern on the front of its drawers. You can make chevron lines or perhaps something symmetrical as shown on Westermanfam.

If you’re not sold on the idea of using a small dresser as a nightstand, then perhaps you’d be more comfortable with an actual nightstand such as the Tarva, also from IKEA. It’s easy to put together but don’t put the legs on just yet. The nightstand comes with square legs but you can easily cut them with a saw and make them tapered. It’s an idea that we got from Hawthorneandmain.

The Tarva nightstand is so lovely that it doesn’t need much else besides its form to look chic and stylish. However, you should get some wood stain for its legs and some paint for the rest just so it doesn’t look so raw and unfinished. We really like the clean look it has on Remodelaholic.

And if you prefer an even smaller nightstand, check out the Selje, a chic piece with a single drawer and four tall legs. We found this really cool idea on Seekatesew which suggests covering the whole piece with fabric. Keep in mind that you need to apply the fabric before you put the nightstand together. Use mod podge to glue it on and a glue gun to make sure the corners and edges are nicely stretched and secured.

The same Selje nightstand can be customized with a classy striped design. To get the black and white look, you should first spray paint the piece white and then you can apply the black stripes. Use electrical tape for this part. It’s a simple process although the effects will be temporary. Feel free to remove the tape when you get bored with it and to try something new. {found on seekandsew}.

When you think about it, side tables and nightstands are pretty much the same thing. So, for instance, if you were to use a Nesna table as a nightstand for your bedroom, that would be perfectly acceptable and practical. Once you have the table, you can paint it and then cover its top with contact paper so it stands out a bit. {found on itsprettynice}.

Another IKEA product that you can use for a similar transformation is the Hemmes nightstand, a piece with a slender construction which can be transformed and customized in a lot of beautiful ways. For instance, Beautifulprotest shows us a version of this nightstand with a white frame, top and shelf and a stained wood drawer front for a little bit of contrast.

Of course, paint and wood stain aren’t your only options if you want to give a plain nightstand a makeover. In fact, there are so many other ideas and materials you can use that the possibilities are endless. Vintagerevivals suggests a look that involved leather and brass. Basically the idea is to cut out leather tags and to install brass drawer pulls on top of them so they can be nicely framed.

The little things often make a huge difference. For example, check out how some new drawer pulls and a little bit of white paint can change an IKEA Rast dresser from something bland and boring into something chic, stylish and even a little bit sophisticated. You can follow the transformation on Armelleblog.

Not every makeover has to leave the nightstand looking all modern and all. You can make yours look vintage if you want to. It’s not that difficult actually. First, get yourself an unfinished nightstand or a small dresser such as the Rast. Then glue on some lattice trim to its drawers, put decorative liner inside the drawers and try to find some with a vintage pattern if possible. After that, sand and stain the drawers and don’t forget about the frame either. The finishing touches are the decorative handles. Find more details about this on Businessinsider.

Some nightstands are meant to look stylish while others are a bit more focused on functionality. Some are not even meant to serve as nightstands, as you can find out from this post we found on Freelancersfashion. This is in fact a trolley, sort of a cart on wheels. It works great in the kitchen but it’s pretty amazing in the bedroom too, offering storage shelves for all the little things like books, makeup, phone and other things.

Makeovers are not meant to be expensive. They’re a simple and cheap way to update an old piece of furniture or to customize a simple one that doesn’t exactly fit the décor. In a lot of cases all you need is some paint and some new hardware. Occasionally, you can also add a few more details such as a new top on a nightstand or some trim on the drawer fronts. {found on infarrantlycreative}

Sometimes paint is not the best option if your desire is to give the nightstand a vintage or even a rustic or an industrial look. Try using wood stain. You can even give the piece a distressed finish using some sandpaper. The right hardware also has a big impact on the final look of the piece so choose carefully. {found on misdiyblog}.

If you’ve seen a dresser or a nightstand that you like but you’re not quite sold on the price, dimension or some other details that define it, create your own version of that piece. You can find inspiration in this sense on Ikeahackers. The idea here was to make a Trysil dresser look like a Kings Lane Campaign dresser. Some paint and some new hardware did the trick.

If space isn’t a problem there’s really no point in having a small nightstand when there’s plenty of room for a large one. And since we’re discussing the topic, perhaps you might also like to be ingenious and to use something like a Besta shelf unit instead of a standard nightstand. It’s wide, it offers plenty of storage and it looks elegant in the bedroom. {found on ikeahackers}.

Let’s say you’ve decided to take our advice and turn an IKEA Rast dresser into a nightstand for your bedroom. How will you personalize it? The easiest method would be with paint. But what if instead of the usual white or black or some other neutral color you would choose to make your new nightstand a more unusual and cool color such as navy blue or turquoise or even something more eye-catching like orange or yellow as a way to add some cheer to the space? The idea came from Thetaleofanuglyhouse.

The same IKEA Rast dresser can be turned into a really elegant piece of furniture with a look that’s a little bit traditional but also a little bit modern. You can even add some trim on the drawer fronts and around the base and give your new nightstand a more sculptural and detailed look. It will basically become a completely new piece of furniture. You can check out Theturquoisehome for all the details on the project.

What you see here is an extendable nightstand which was created out of a Malm unit. The drawers offer plenty of storage for everything from books, to alarm clocks, magazines, makeup products and all sorts of other things. Of course, the really cool thing about this particular nightstand is the fact that it was customized to have an extendable top. You can find out all about it on Ikeahackers.

The IKEA Koppang chest is pretty similar to the Rast dresser. It has three drawers and it can easily serve as a nightstand. In fact, it’s an amazing nightstand if you can figure out what the best look for it is. Perhaps some gold accents would make it look a bit glamorous and this can be just the thing that your bedroom needs. The inspiration comes from Emilyyaclark.

The gilded nightstand from Stylemepretty is also just a little bit glamorous, not too opulent but not too simple either. This one is actually a Rast dresser transformed into a nightstand, like the many others we’ve already talked about. It also looks like a campaign nightstand and this gives it a distinguished look.

The Tarva nightstand featured on Dearlittleblog is pretty interesting too. It has a cool distressed finish with golden metallic drawer pulls. The combination is contrasting but also pretty harmonious. The two different finishes complement each other without clashing and that’s what most combinations are all about.

Something pretty cool you can change about your IKEA Rast dressed now turned into a nightstand is the number of drawer pulls. Sure, three or six is good and pretty common but what if you had nine? that’s right, three on each drawer. Actually, you can create the impression that the nightstand has nine tiny drawers instead of three large ones. Find out all about this on Thriftyandchic.

We really love the transformation from dresser to nightstand featured on Athomeinthenorthwestblog. The coolest thing about it is the color: a vivid tone of green. It looks wonderful in combination with those lovely drawer knobs that give it just the right amount of romantic charm it needs to really stand out.

On the other hand, if a single color seems a bit too simple for a whole new look that’s your’re going for, you can try a combination. We found this really interesting makeover on Realitydaydream. The dresser wasn’t just painted and repurposed as a nightstand but it also got a whole new look with curved panels on its drawers that form a funky pattern. 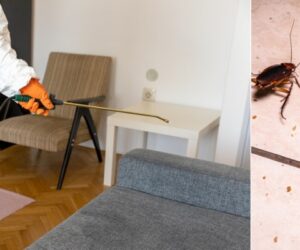