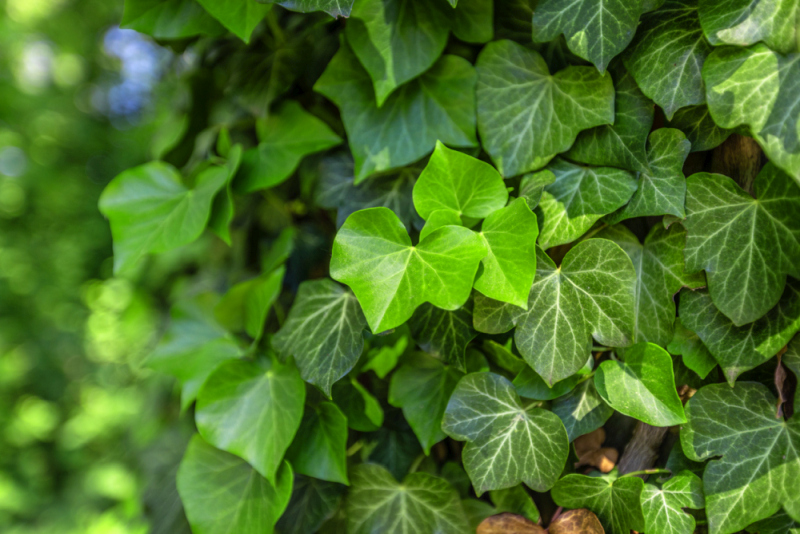 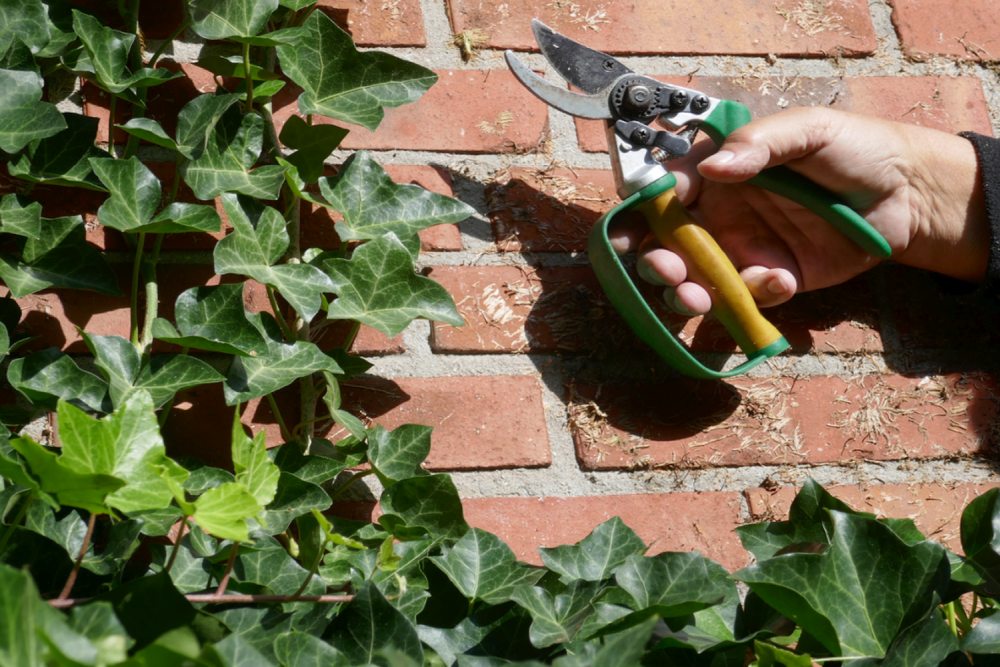 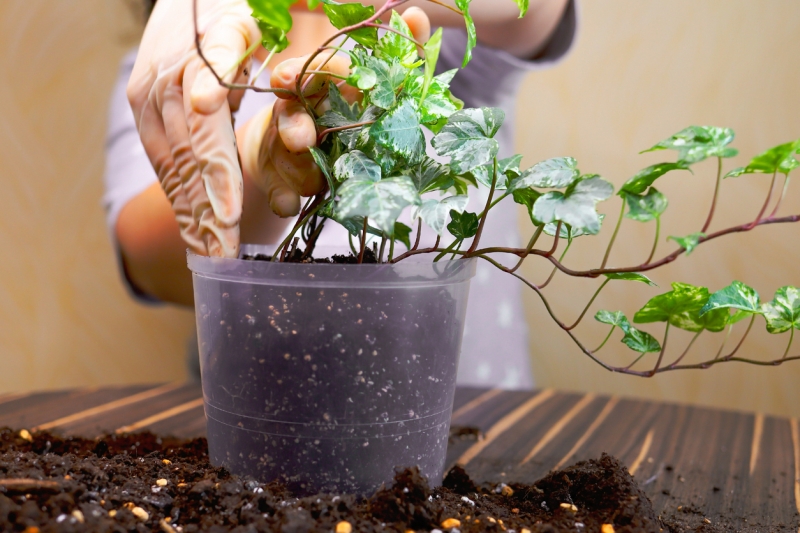 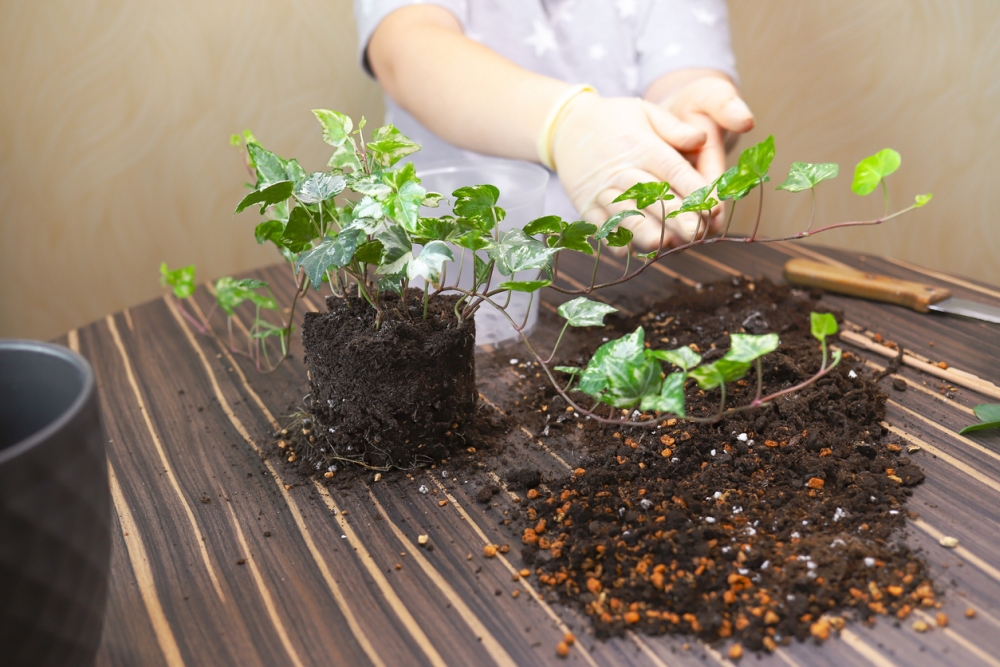 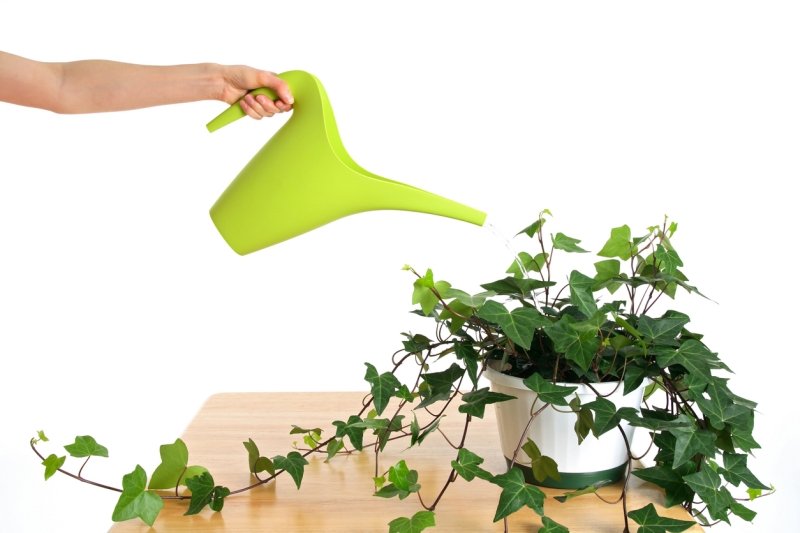 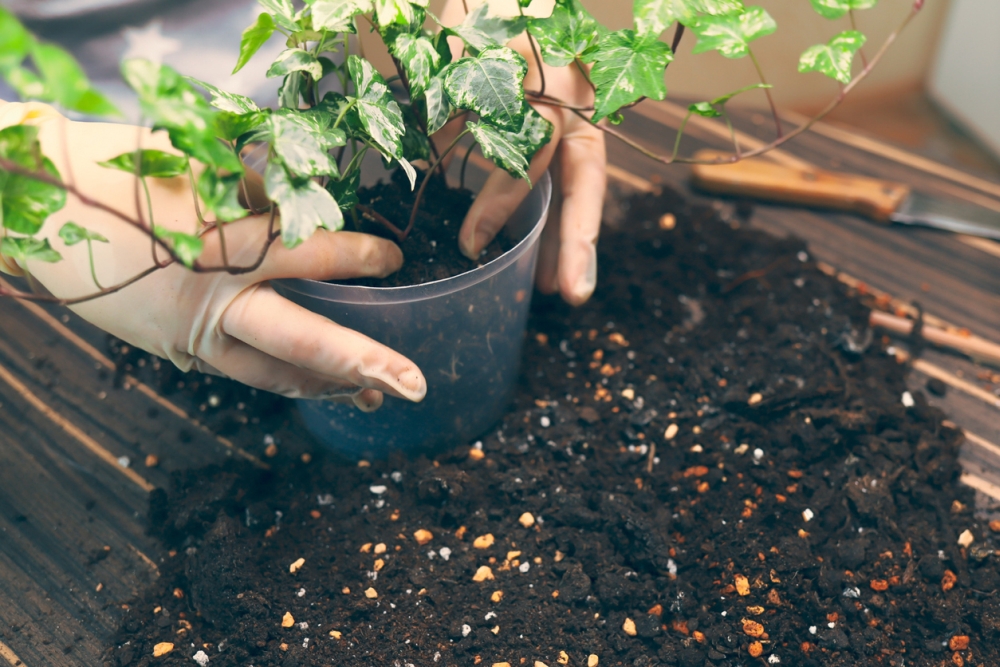 With its woody appearance and vivid green foliage, the English ivy can be an obtrusive plant. However, when properly cared for, it is a plant that adds a lot of color into your home, so let’s take a look at what are the main requirements to grow an English ivy plant indoors.

What Is an English Ivy Plant?

Native to Europe and some parts of Russia, the English ivy plant is mainly grown outdoors, where it can be seen covering fences and walls, adorning them with the elegant shade of green. Since it can reach heights of up to 100 feet, it is considered an invasive plant in many different parts of America. In the US, people mainly grow English ivy to either hang it outdoors in a basket or indoors, if you follow the care steps we’re going to talk about in the upcoming section.

Also known as the “ Hedera helix”, the English ivy plant thrives in acidic soil, blooms in fall/early winter, and is toxic for your pets. Let’s discover more about what it means to grow an English ivy plant indoors.

How to Grow an English Ivy Plant Indoor

English ivy plants like bright light, regardless of the season. During hot summer days, you don’t want to leave the plant exposed to direct sunlight, as it is very bright and can burn the leaves. You can leave it in the sunlight for a couple of hours in the morning and, in winter, it accepts more sunlight exposure, since it isn’t very hot. If you have any south-facing windows in your house, that’s where you want to keep the English ivy.

The English ivy plant loves moisture, so humid conditions will do wonders for it. However, the plant can be sensitive to overwatering, so you don’t want to let the soil dry out completely, but you also want to prevent it from being deeply soaked in water. The best way to care for an English ivy plant in terms of watering is to make sure the soil is kept evenly moist.

In certain scenarios, it can tolerate a little drought, but when the soil has just the right amount of moisture, that’s when the plant will have the most vivid and bright green shade of all. When watering, you want to make sure you don’t pour water on the leaves, and instead aim the watering can directly at the base of the plant. If the plant’s leaves are wet, they are likely to develop fungal diseases.

As far as soil is concerned, the English ivy plant likes moist and well-drained soil. It isn’t the most pretentious plant in terms of soil requirements, but there are some things to keep in mind, depending on whether you’re growing the plant indoors or outside. When grown outdoors, it’s best to cover the soil with plenty of mulch, to keep it moist and have the base of the plant protected.

Growing the English ivy plant indoors means choosing a loose and well-drained soil potting mix. The plant doesn’t really care much for soil pH, but it seems to enjoy a slightly acidic blend.

Another great thing about this plant is that it doesn’t require a lot of fertilizer, so that’s a lower investment for the gardening enthusiasts. In early spring, you want to add a little bit of fertilizer because, when planted in the right conditions, the English ivy plant isn’t all that hungry. However, you can’t neglect the plant’s needs during the growth season, when it’s best to give it a controlled-release fertilizer. Alternatively, you can feel it biweekly with diluted liquid fertilizer.

The ideal temperature for the English ivy plant will differ based on whether you’re growing it indoors or outside. When planted outside, English ivy needs to be protected from aggressive summer heat and harsh winter winds. Even if the plant normally likes humidity, too much moisture can encourage root rot, which could eventually kill the plant.

For those of you planting the English ivy indoors, we have to mention that the plant is more tolerant to lower temperatures (which can drop to 60 degrees Fahrenheit during the night). However, during the summer, even the plants that are grown indoors like a little bit of humidity, so you can use a spray bottle to mist the plant. This isn’t necessary for outdoor plants, as there is usually enough moisture in the air to keep them covered.

English Ivy is a plant that can contract some diseases which are pretty common amongst houseplants. There are more than 40 pathogens that can affect this particular plant variety, but only a few of them can actually kill your indoor plant.

Repotting the English ivy plant isn’t that much different compared to the process that one must usually go through when repotting other house plant varieties. You will need a pot that’s about two inches bigger than the current one. Make sure you pick a container that has drainage at the bottom. Cover the drainage holes using coffee filters, shards, or rock, to prevent the soil from coming out the bottom hole whenever you add water. Fill the new container about ⅓ with regular houseplant potting soil (which can be found at various online and offline stores).

To remove the plant from its current container, turn the pot with the plant upside down and bang the rim on the edge of the table. You will need to carefully maneuver the plant at the same time to prevent the stems from breaking. Make sure that the root ball doesn’t fall to the ground as you’re attempting this removal process.

Remove the loose soil from the root ball using your fingers. The root ball will be placed in the center of the new pot. Add soil around it so that it’s eventually at a height located about half an inch below the pot rim. Add more potting soil around the root ball and pat it down gently to remove the air pockets in the soil.

Place the container with the plant in a drainage tray and process with adding water until you notice that it comes out at the bottom of the pot, through the drainage holes. When the soil has enough water, empty the drainage tray.

You will notice that it soon starts to grow a fresh network of roots (it usually takes about six weeks for this to happen). When you notice that new roots have formed, move the cuttings into proper potting soil (this can be either directly in the garden or in a container, if you wish to grow the plant indoors).

Pruning is a very important part of caring for a plant that’s as invasive as English ivy. When planted outdoors, this plant can literally spread anywhere, and pruning is a great way to keep it under control and give the plant a nice shape. Otherwise, it can invade the space of the plants around it, so it has to be contained.

Expert gardeners recommend pinching the growing tips in order to keep the foliage rich and compact. The alternative is cutting back the plants once every couple of years to contain it and give it a nice shape.

This is one of the most common diseases known to affect the English Ivy plant. When diseases occur, you will notice black and brown lesions appearing on the surface of the leaves (they may or may not be surrounded by yellow halos). In certain cases, leaf spotting can cause stunted growth or causes stems to become distorted. If this happens, you want to remove infected plant debris and treat the plants with a solution made from water and vinegar.

This problem is likely to occur when dealing with excessive soil moisture that’s typically caused by overwatering the plant. When root rot spreads, the roots may start showing signs characterized by brown lesions. Diseased plants need to be discarded, and infected roots have to be cut off. The remainder of the plant need to be treated using a special fungicide that contains triflumizole.

If your English ivy has Anthracnose, you will notice black and brown lesions on the leaves, especially on the edges. If the problem isn’t spotted in time and the plant isn’t treated, you will notice more black spots and distorted stems. Drip watering systems are the best way to prevent this problem. Experts recommend treating the plant using fungicide that needs to be diluted before it can be applied.

As far as pests are concerned, we’ve group them based on the damage they can do to your English Ivy plant:

Yes. In fact, almost every ivy species is toxic for your pets, especially cats and dogs that are curious enough to chew the leaves of the plants. It isn’t very common for pets to ingest a quantity that’s high enough to be fatal, but they can still end up with symptoms of poisoning.

The plant contains a toxin that’s usually more concentrated in the leaves and foliage. Some of the most common symptoms of English Ivy poisoning include: loss of appetite, nausea, vomiting, diarrhea, pain in the abdomen, redness and blistering around the mouth, and facial swelling.

Cultivars are often determined by examining the shape of the leaves and the plant. Today, there are hundreds of cultivars of the English ivy, and here are the most common ones you’re bound to come across:

As you can see, the English ivy isn’t exactly a plant to be scared of, but it’s probably not the best choice in a household with pets either (you could probably keep the plant out of the reach of your dog, but cats have the magical gift of climbing even the highest furniture pieces). Otherwise, it’s important to note that the English ivy doesn’t deserve its reputation and can easily be contained if you have the patience to care for an outdoor plant. Growing it indoors is 10 times easier.