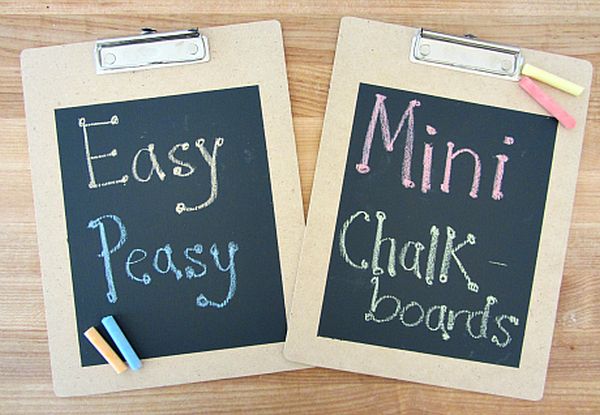 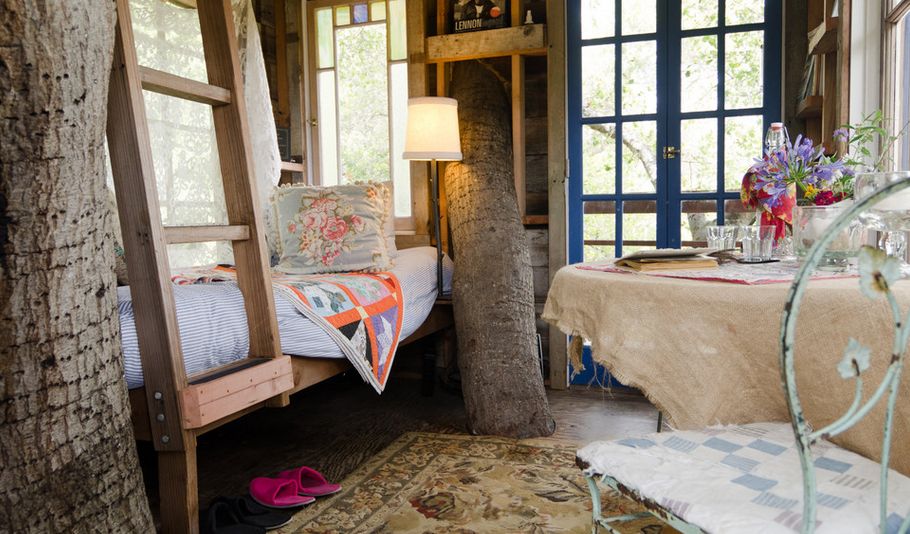 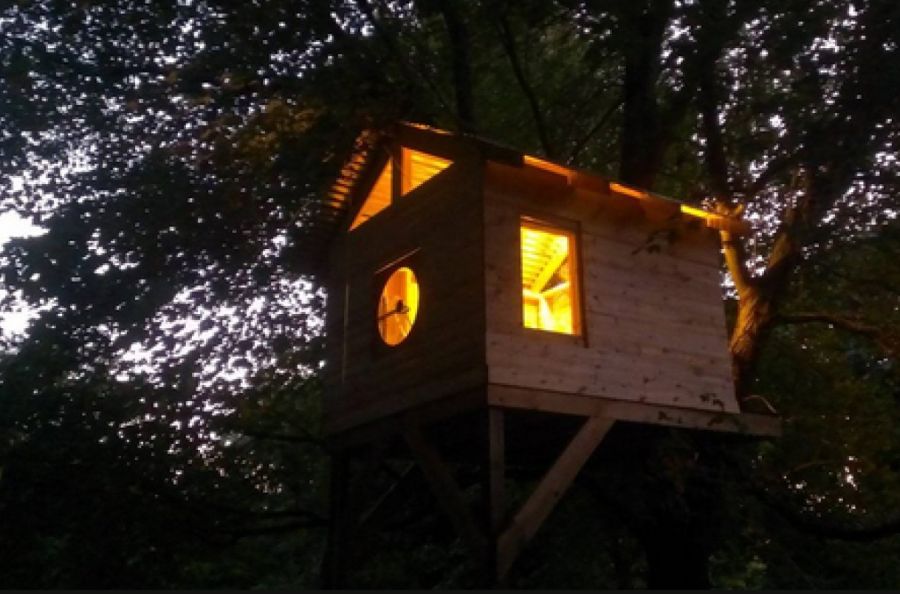 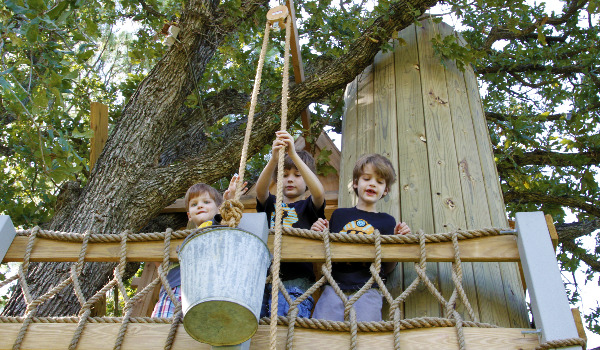 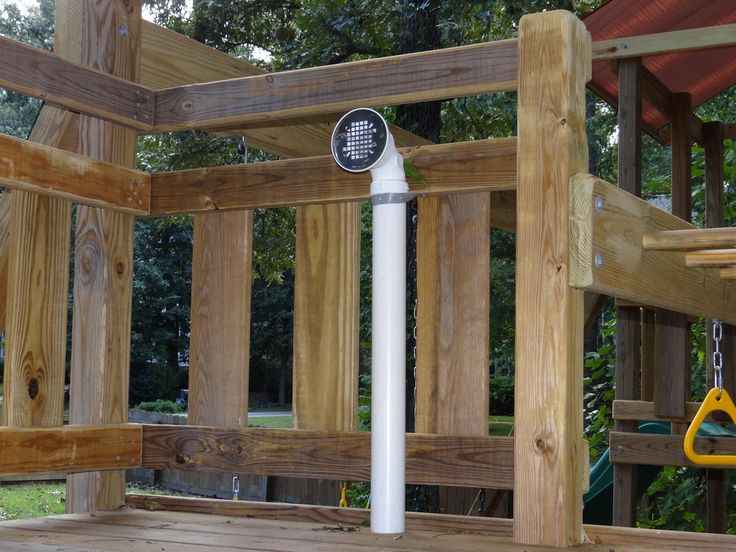 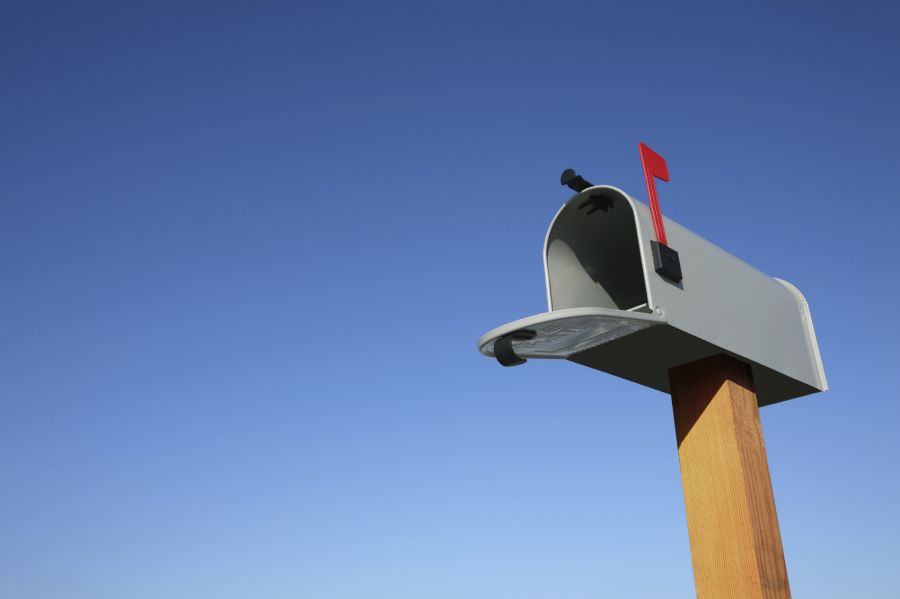 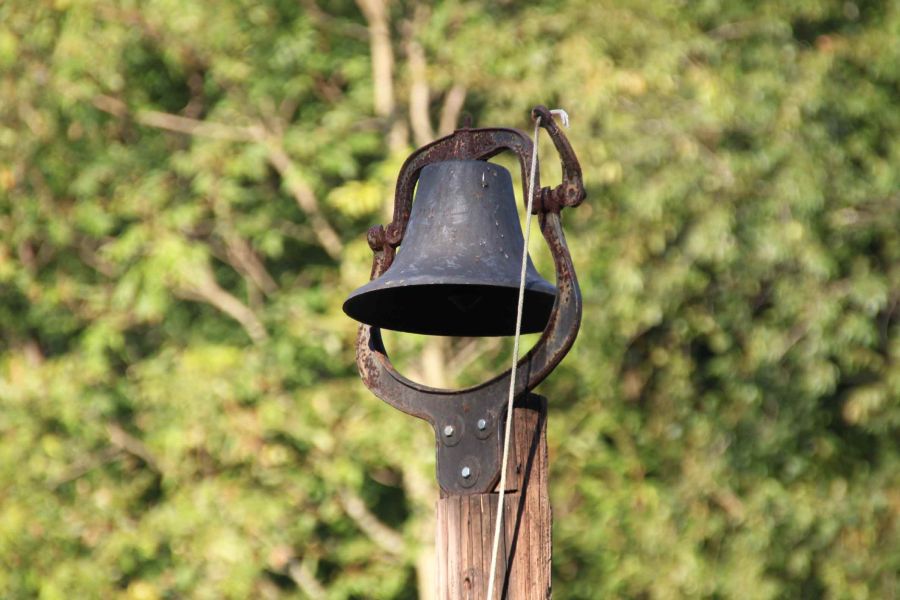 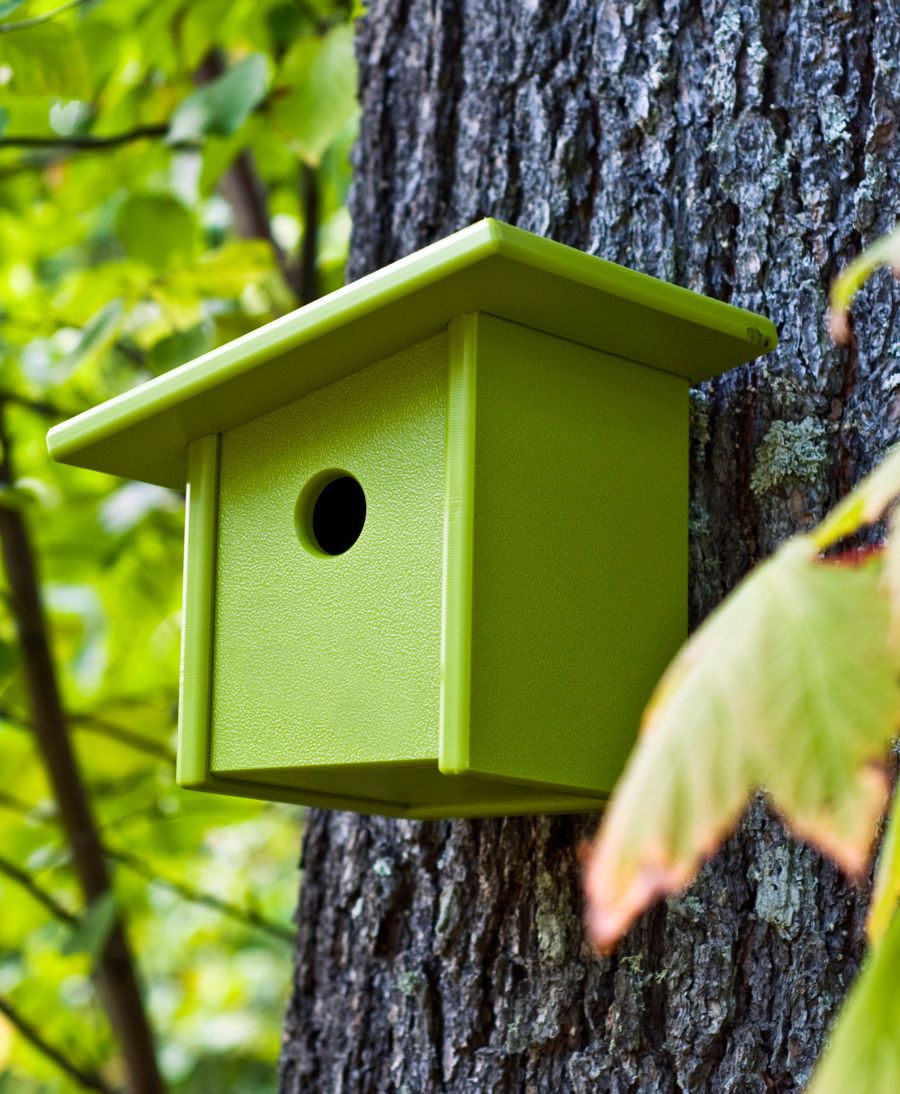 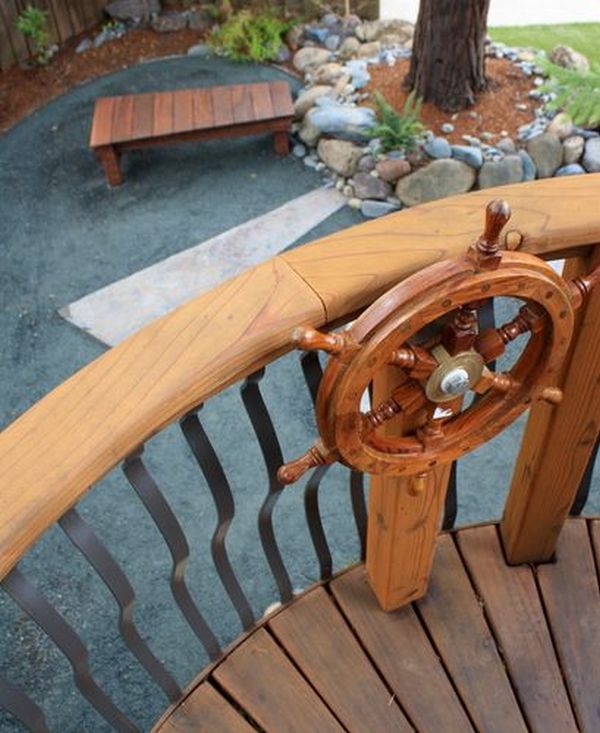 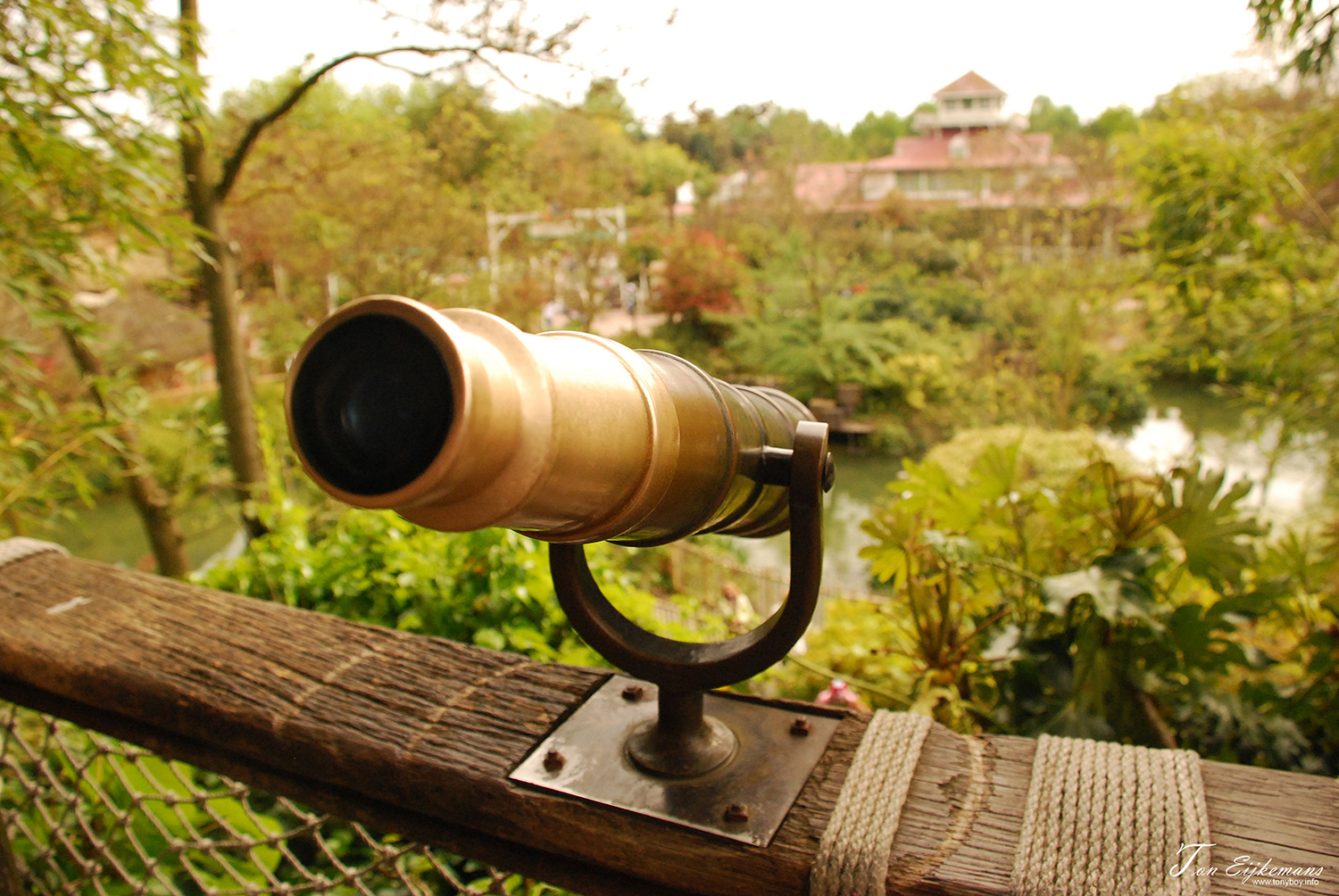 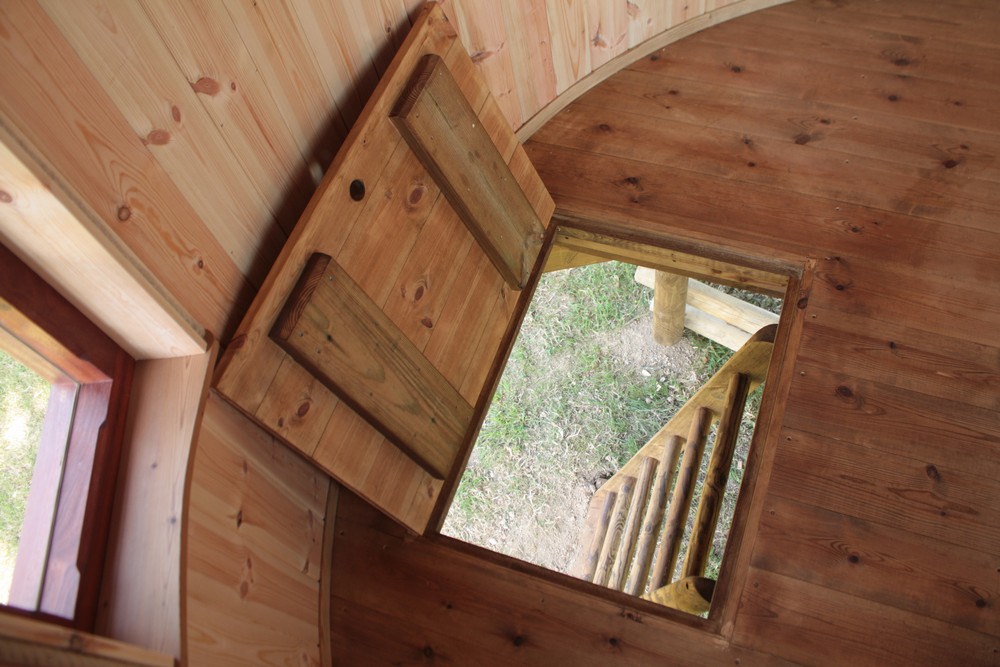 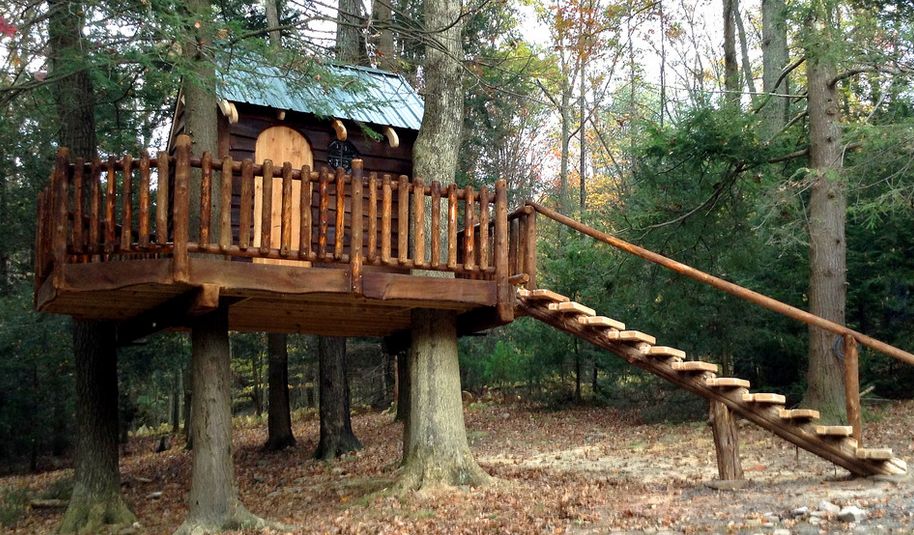 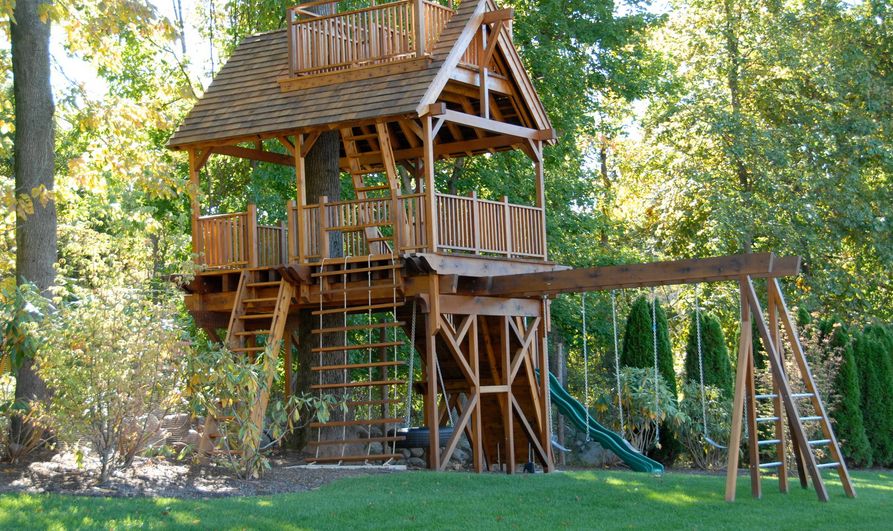 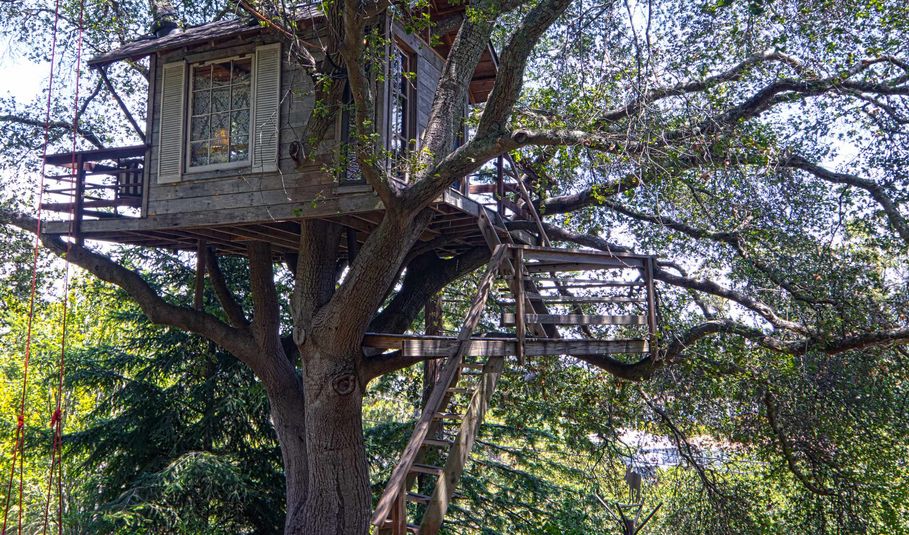 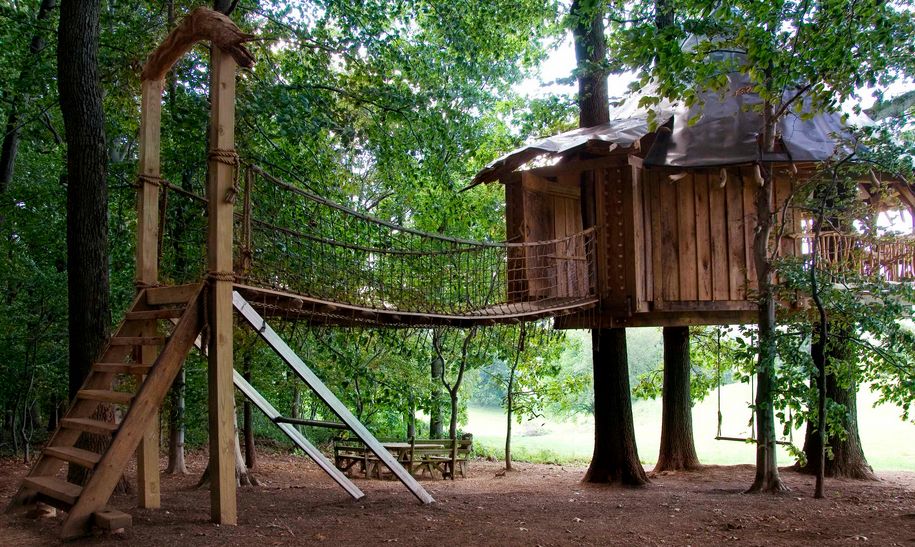 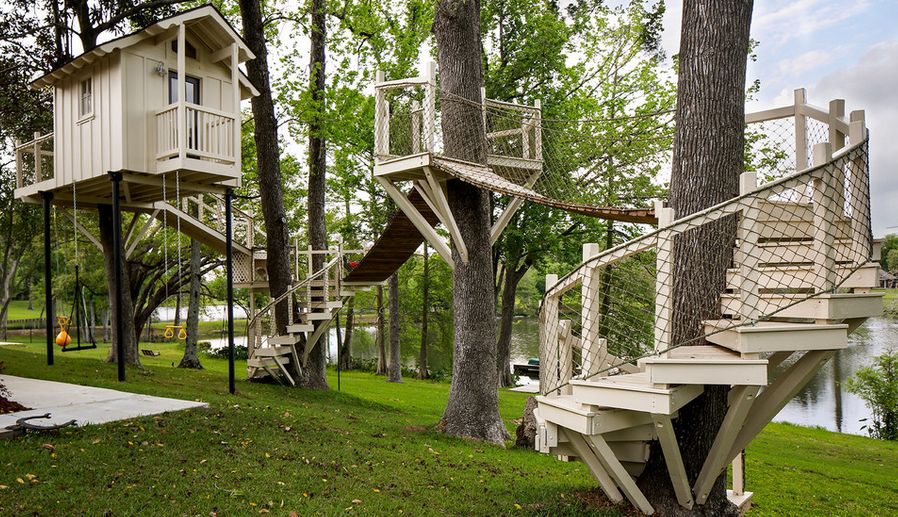 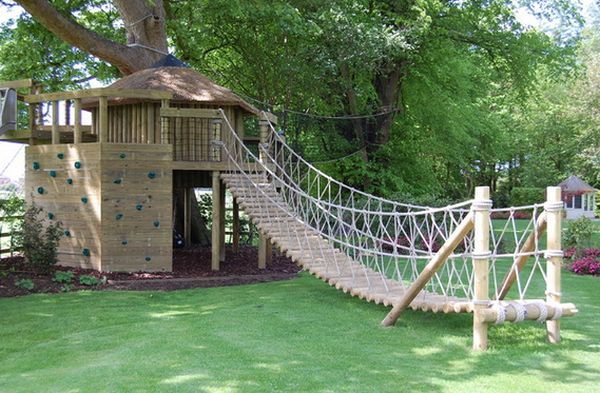 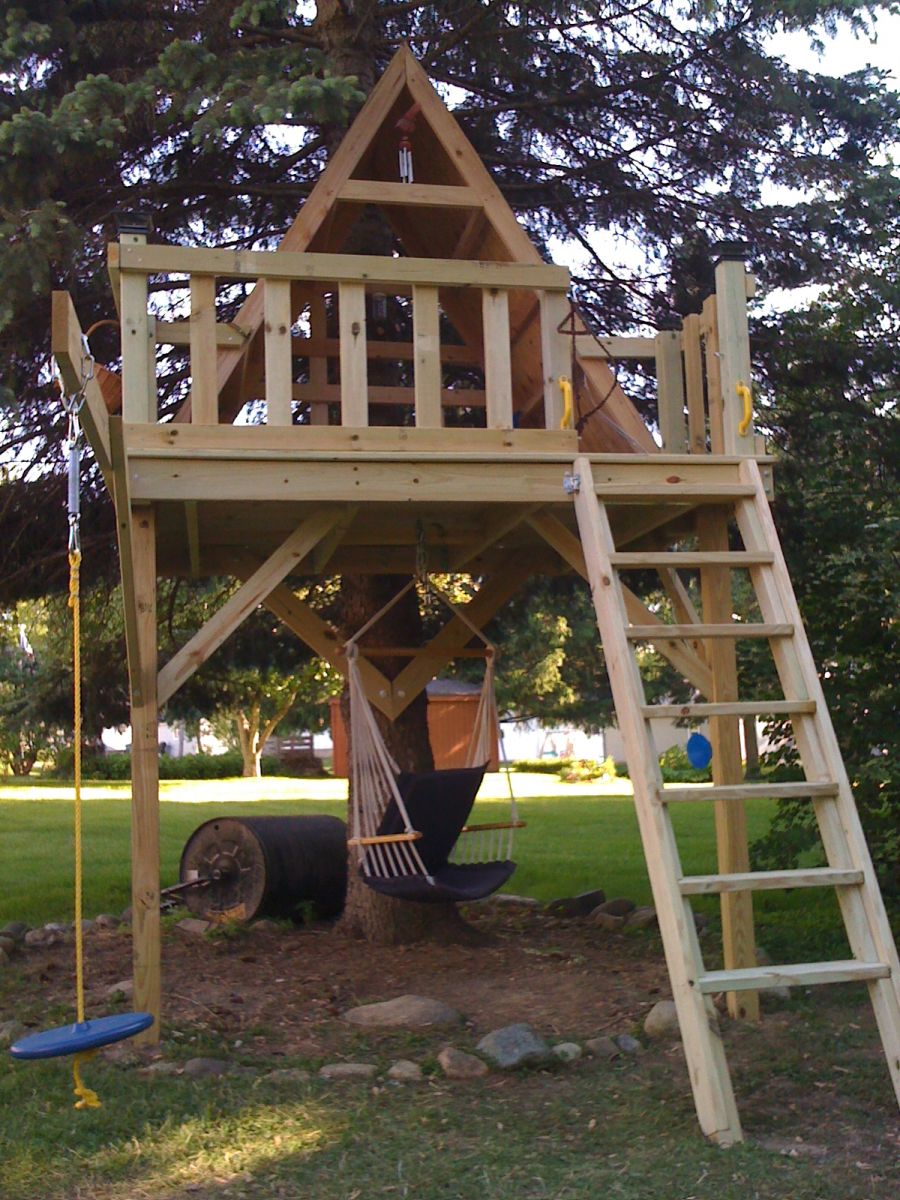 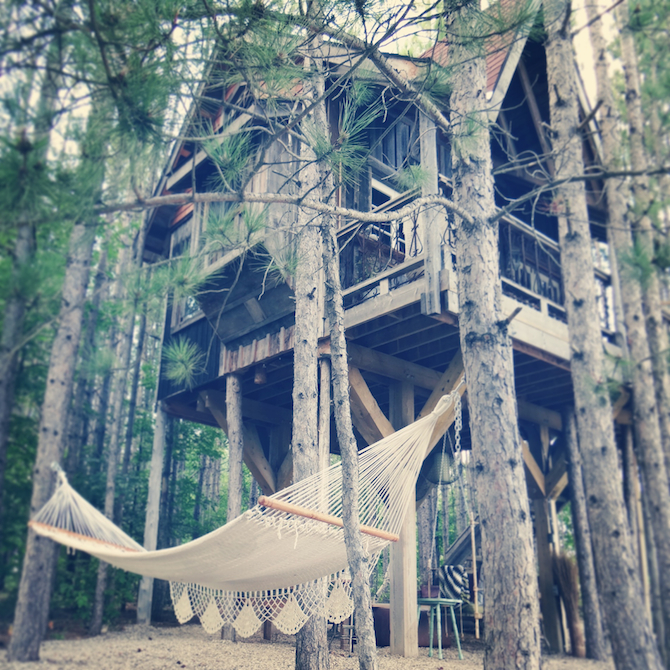 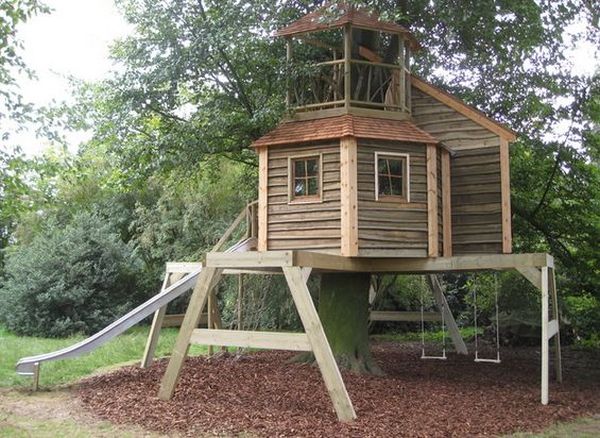 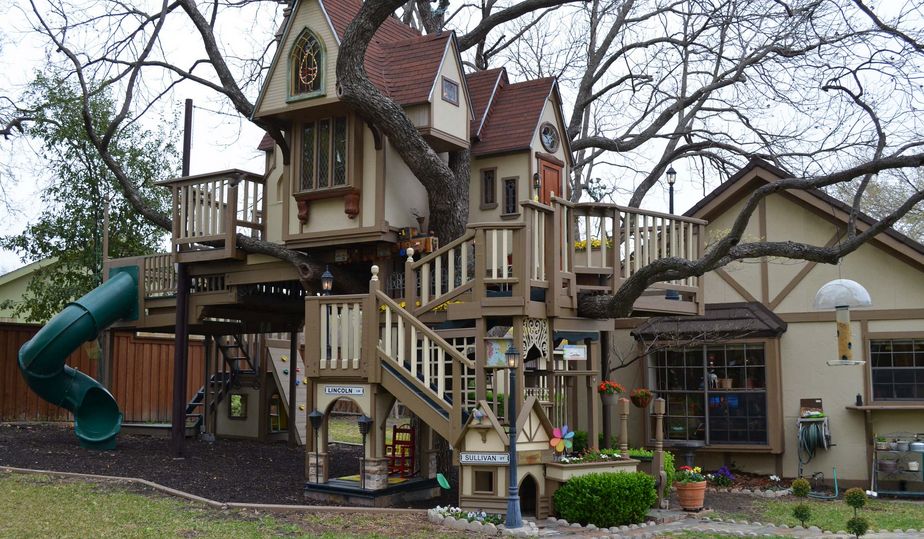 In order for the kids to actually enjoy their treehouse it has to include features they love. So the obvious approach would be to let the kids design it or at least to involve them in the project. Sure, as a parent you can have tons of great ideas too, especially if you had a treehouse as a kid but there’s also the safety issue. It’s why, as an adult, you have a big responsibility. Today we’ll focus on the elements that would make a treehouse really awesome and on ways to successfully integrate them in your design.

Slides are fun and kids love them. But that’s not the only reason you should add one to the treehouse you’re building. Slides are also practical in this case, allowing kids to get out in a flash and without incidents. It’s definitely a lot safer than a ladder.

It should be pretty easy to find a good spot for a swing under the treehouse. But since there will always be a bunch of kids playing there, you might as well put more than one swing so they don’t have to argue or take turns.{found on highlifetreehouses}.

Who doesn’t love hammocks? They’re so great and relaxing you can’t possible resist them. And they’re not only fun for adults as kids enjoy them too. So why not add a hammock or two to your kids’ treehouse so they can relax or even take a nap whenever they want?{found on flickr}.

There are lots of ways in which bridges can be fun in the case of treehouses. For example, a bridge can look awesome if the treehouse looks like a castle or it can connect two treehouses in case you decide to have more than one. Maybe you can even design a series of spiraling staircases and ladders to make the whole composition more interesting.{found on barneswalker and oivanki}.

A ladder or a staircase.

Yes, we did mention that slides are safer than ladders, but this doesn’t mean ladders are a safety hazard. In fact, they can be really fun for older kids that know how to use them. And if a ladder seems too unsafe for you, put a staircase instead. You can combine both these features with other fun elements.{found on hughloftingtimberframe, brandesmaselli}.

If the treehouse is built around a single tree, then it’s close to impossible to also add a porch or anything similar to it. But if it’s supported by multiple trees then you can be creative and add extra features such as a balcony, a porch or other such elements.{found on treetopbuilders}.

If you had a treehouse with a trap door as a kid then you know how fun this simple feature can be. It’s not about the ways in which the trapdoor can be sued as much as it is about the simple fact of having one.

A periscope or telescope

Sitting up there in the treehouse, it’s fun and interesting to observe the rest of the world and a periscope or a telescope would make things a lot more awesome. The kids can look at the stars at night when they have sleepovers or simply play with each other and pretend they’re pirates or explorers.

And speaking of pirates, how fun would it be for the kids to have a pirate ship wheel in their treehouse? Of course, it would be really cool if the treehouse were to look like a ship but that’s a whole other thing. To complete the look you can also add a flagpole.

A birdhouse or bird feeder.

Lots of little birds spend most of their time in the trees in your backyard so if you’re building a treehouse there for your kids keep in mind that you might be destroying the homes of these birds in the process. So build a birdhouse or two for them. The kids will enjoy looking at the little creatures and observing them.

Add a dinner bell so you can call the kids inside for snacks, lunch or dinner. It’s useful and easy to build. Actually, this is not an accessory for the treehouse but for the parents but the kids might enjoy having one themselves as well.

Every house needs a mailbox so why should treehouses be any different? Surely the kids would love knowing you’re taking this project seriously and offering them all the accessories. They won’t get any real mail but maybe their friends will leave them messages there.

Speaking tubes are sometimes found in playgrounds and kids really enjoy playing with them. So add one to the treehouse. It’s easy to build if you want to make it yourself but you can also buy one.

With this simple feature the kids can bring up snacks, toys and other things and they can have tons of fun. Plus, you don’t have to go up to give them stuff. You’re not allowed to anyway so this solves that problem.{found on kidsactivitiesblog}.

The kids will mostly play in their treehouse during daytime but you also need to get the structure ready for when they might have sleepovers there or play when it’s dark outside. So don’t neglect the lighting. A simple idea would be to opt for solar-powered lamps and lanterns but you can have lots of fun with this part of the project.

There’s little space in a treehouse but, even so, you must include some furniture. Make sure it’s kid-sized. It will look cute and it will also allow you to save space. You can add a small table and some chairs, maybe even some shelves for storage.

And after you’re done with all the furniture, add some accessories as well. A chalkboard would be nice. Kids love to draw on them and you can either buy one or make one yourself. Don’t forget to give them colored chalk as well.