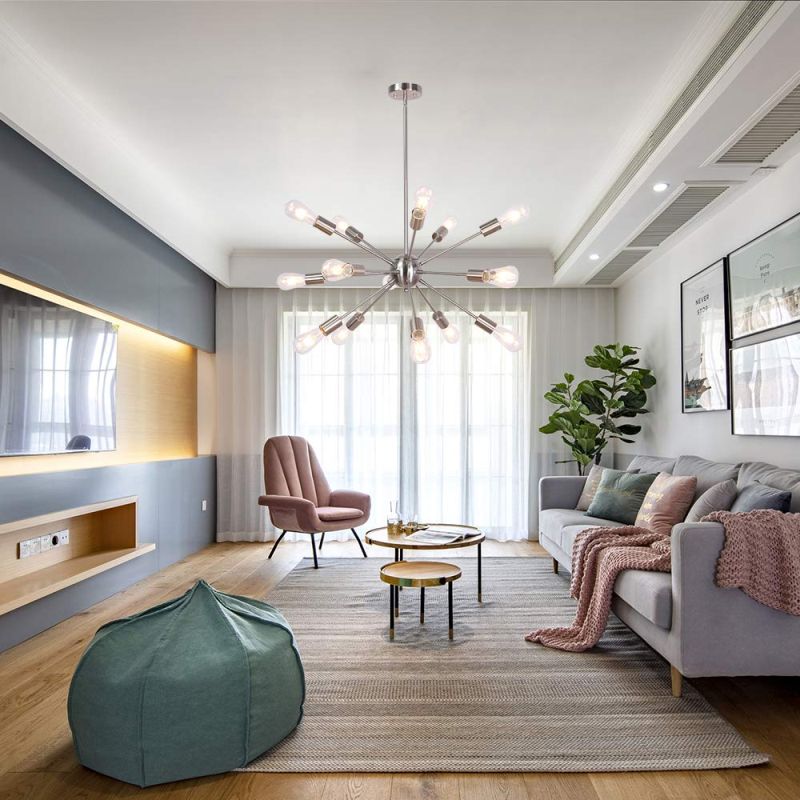 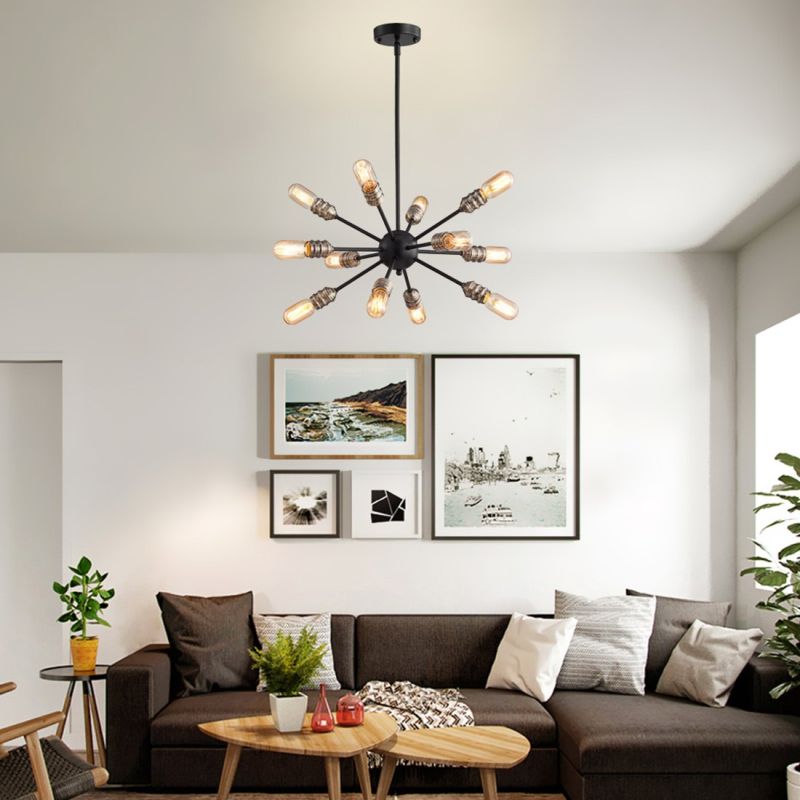 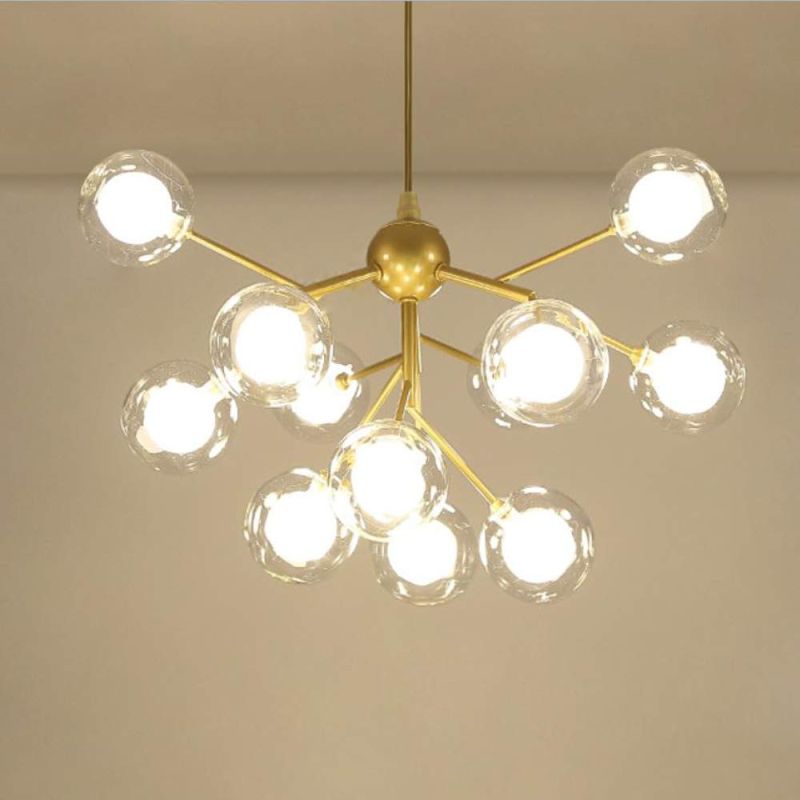 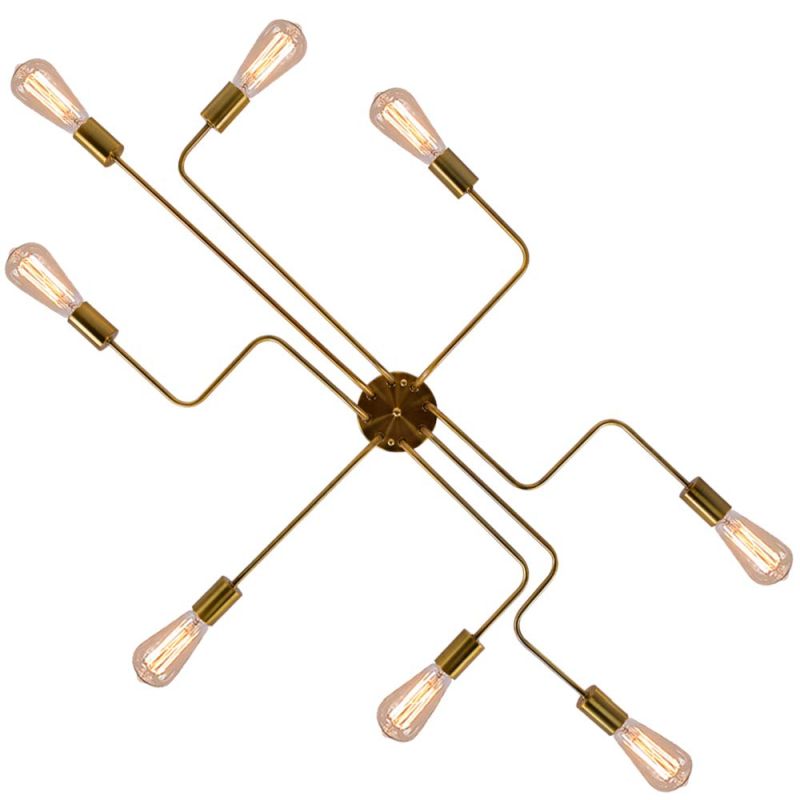 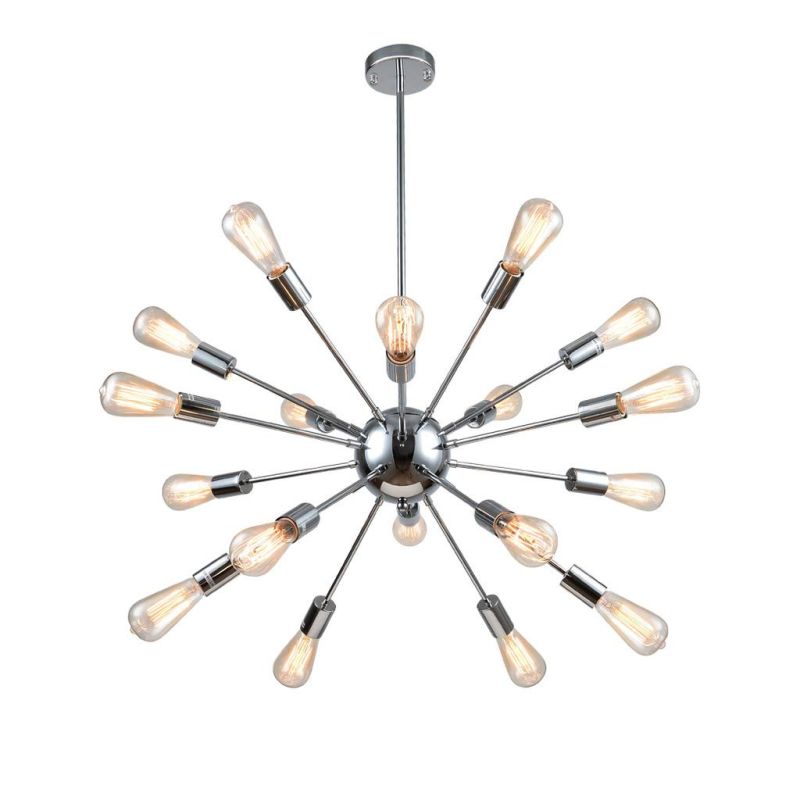 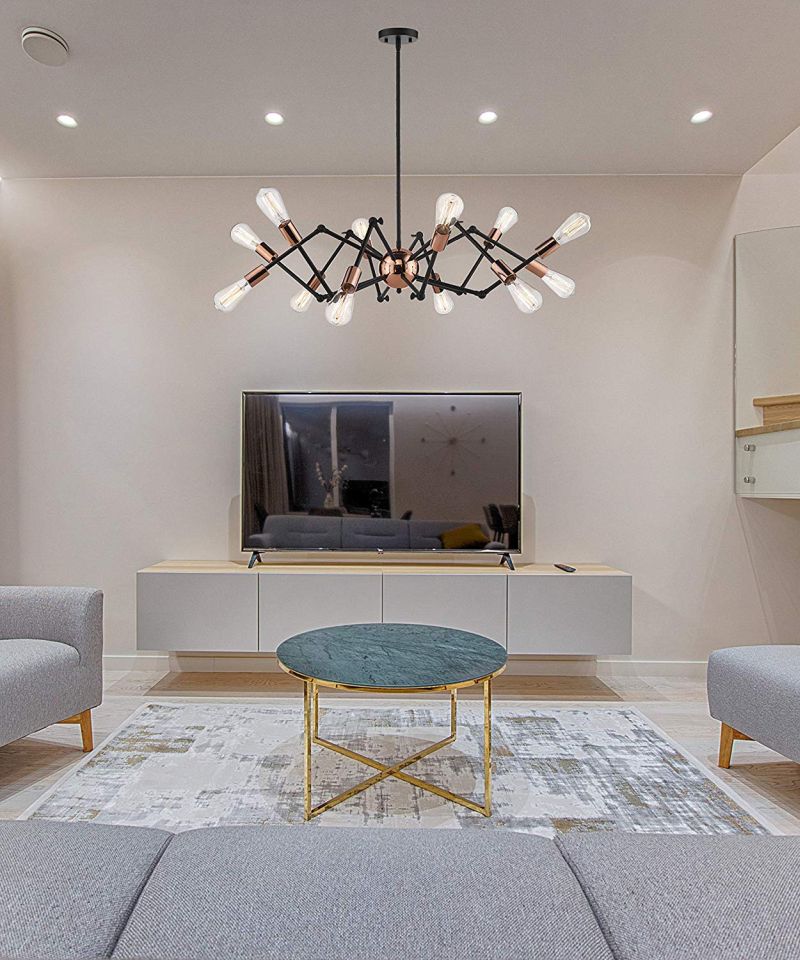 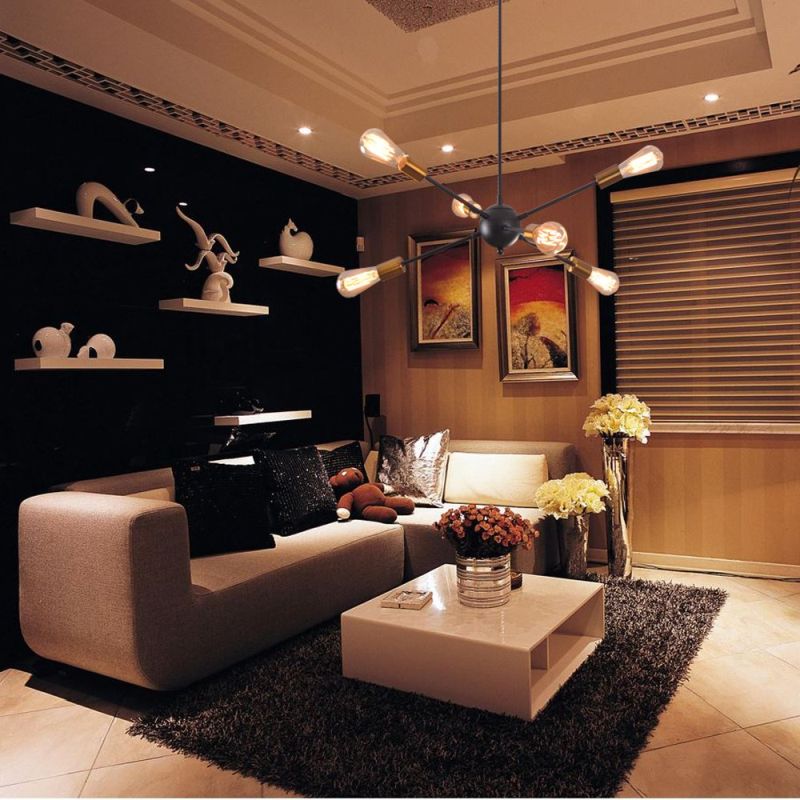 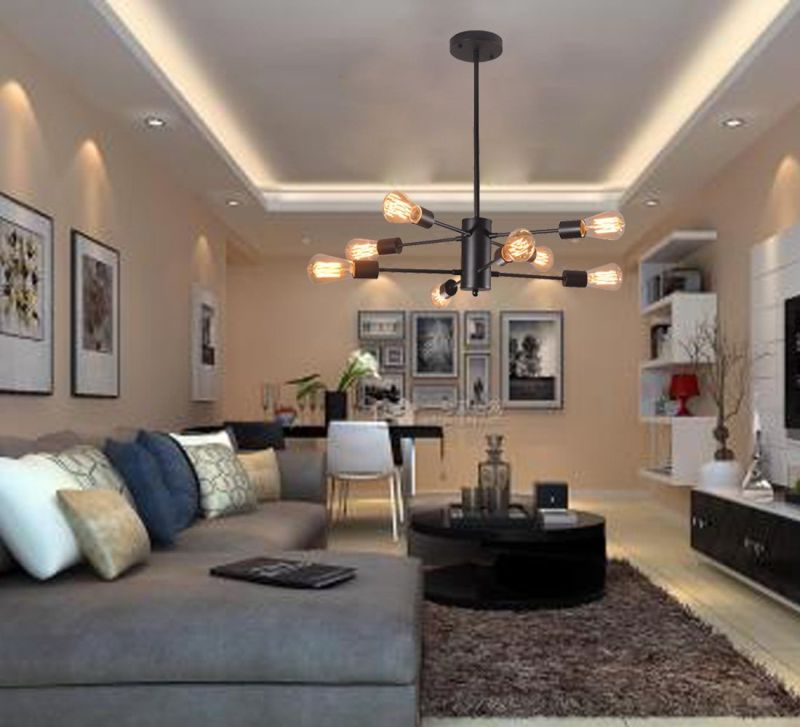 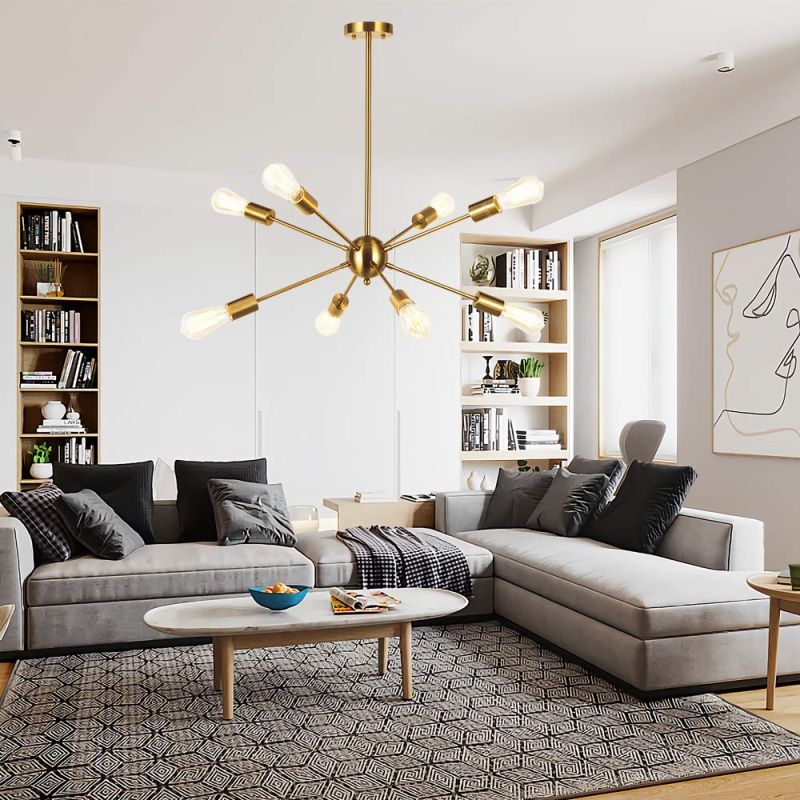 Have you ever looked at a chandelier and thought to yourself “that kind of looks like Sputnik”? You’re not the only one. There are actually quite a few such light fixtures. It seems the first artificial earth satellite inspired a lot of designers. It was launched back in 1957 and although it fell back into the atmosphere just a few months after that, it had a huge impact on everything that was to come. Today we’re looking at a few Sputnik light fixtures that you could actually own if you’re into the this style.

This is the VINLUZ Sputnik Chandelier. It has eight arms, each with a light bulb at the end, all pre-wired and pre-threaded. They’re all connected to a central ball and have this beautiful golden finish that gives the chandelier a very elegant and refined look and also helps it stay trendy. The hanging height can be adjusted per your request which is a nice detail that increases the versatility of this piece. 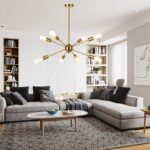 The Dellemade XD00859 Sputnik Chandelier also has eight arms but they’re all horizontal and parallel to each other which makes this fixture a bit different from other similar models. It’s easy to install and all the arms are already wired and ready to be screwed into the cylinder-shaped central piece. The chandelier is 31” (80 cm) wide and 26.7” (68 cm) long. The height is adjustable.

This Dellemade Sputnik Chandelier only has six arms but that doesn’t make it any less eye-catching. In fact, this helps to highlight its simplicity. The design is modern and minimalist and the height is adjustable which makes this chandelier a great fit for a variety of different spaces including living rooms, hallways, offices and more. It measures 29.5” in diameter and uses six E26 bulbs. 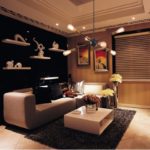 What's really cool about it is that you can adjust the angle on the arms to create the perfect combo based on your needs.

The Jazava Sputnik Chandelier has no less than 12 arms which makes it best for large living rooms, dining areas and big spaces in general. It features a modern-industrial design and can be installed on both sloped and flat ceilings. The dimensions of this chandelier are as follows: 31.89” diameter, 15” fixture height and 47.24” total height. 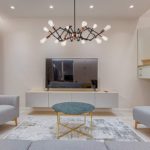 This 12-lights ceiling pendant can DIY the style with the special feature that all the arms can adjust the angle around the central rod,

The mirrea Sputnik chandelier is even more impressive, featuring a total of 18 arms, each with a light bulb at the end. It measures 37.40” in diameter and the height at which it hangs is adjustable although a high ceiling is required considering the proportions of this fixture. You can also install this chandelier on a sloped ceiling if required and the adaptor is included. 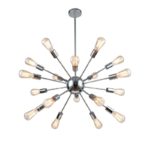 This chandelier light can be installed on the sloped ceiling with the adaptor in package.

This is the OYI Sputnik chandelier and, as you can see, it has a pretty special design. It’s a semi-flush ceiling light with eight arms that stretch and curve but don’t go straight down which allows the chandelier to have a low profile and to be suitable for all types of spaces, especially those with low or regular-height ceilings. 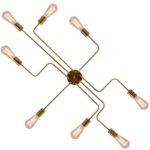 The chandelier uses 8 bulbs and is suitable for a variety of types of spaces such as living rooms, hallways, dining areas, even kitchens and bedrooms.

The Dellemade DD00134 Sputnik Chandelier offers a different interpretation of the same concept. It features 12 lights that forms branches in all directions starting from the center. They’re surrounded by clear glass globes that create a diffuse light source that’s pleasant to look at yet powerful. 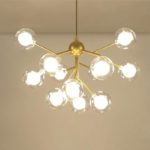 It uses 12 G4 bulbs and has a really cute and stylish design.

The TZOE Sputnik Chandelier is really cool in its own special way. It has a mid-century modern design which gives it a lot of character and it’s really easy to install. It uses 12 light bulbs, each attached to a straight arm that shoots out of the central sphere. This causes the light to be dispersed evenly in all directions. It works with incandescent, LED, CFL and halogen light bulbs. 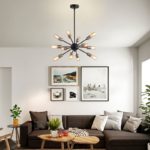 This is the MELUCEE Sputnik Chandelier which has a design really similar to the one showed just above. It has 15 straight arms connected to a central sphere, each with a light bulb at the end. All the arms are pre-wired for easy installation and the hanging length can be adjusted using the 4 rods included. 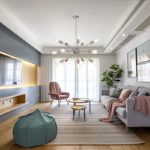 The brushed nickel finish gives the chandelier a modern look with a hint of industrial charm.

The Mengzhu-Michelle Sputnik Chandelier is really impressive. It’s 1.2 meters high and has 12 arms. Each arm consists of 2 sections and can folded and adjusted. That means you can have the light bulbs pointing in the desired direction and you can give your chandelier a really special look.

The brushed nickel finish gives the chandelier a modern look with a hint of industrial charm.