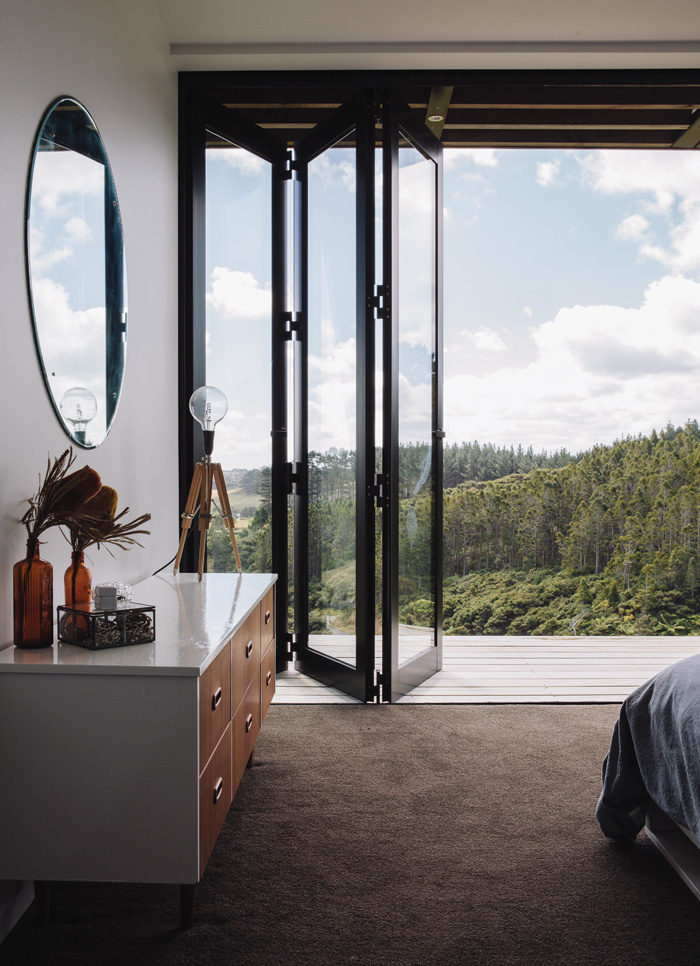 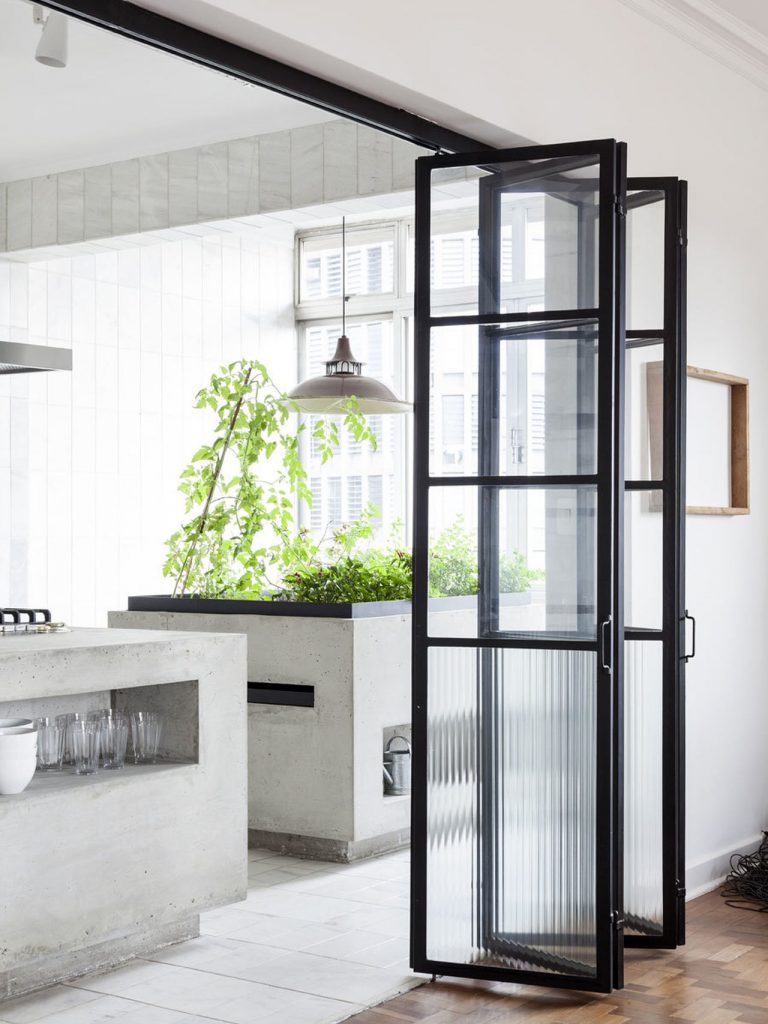 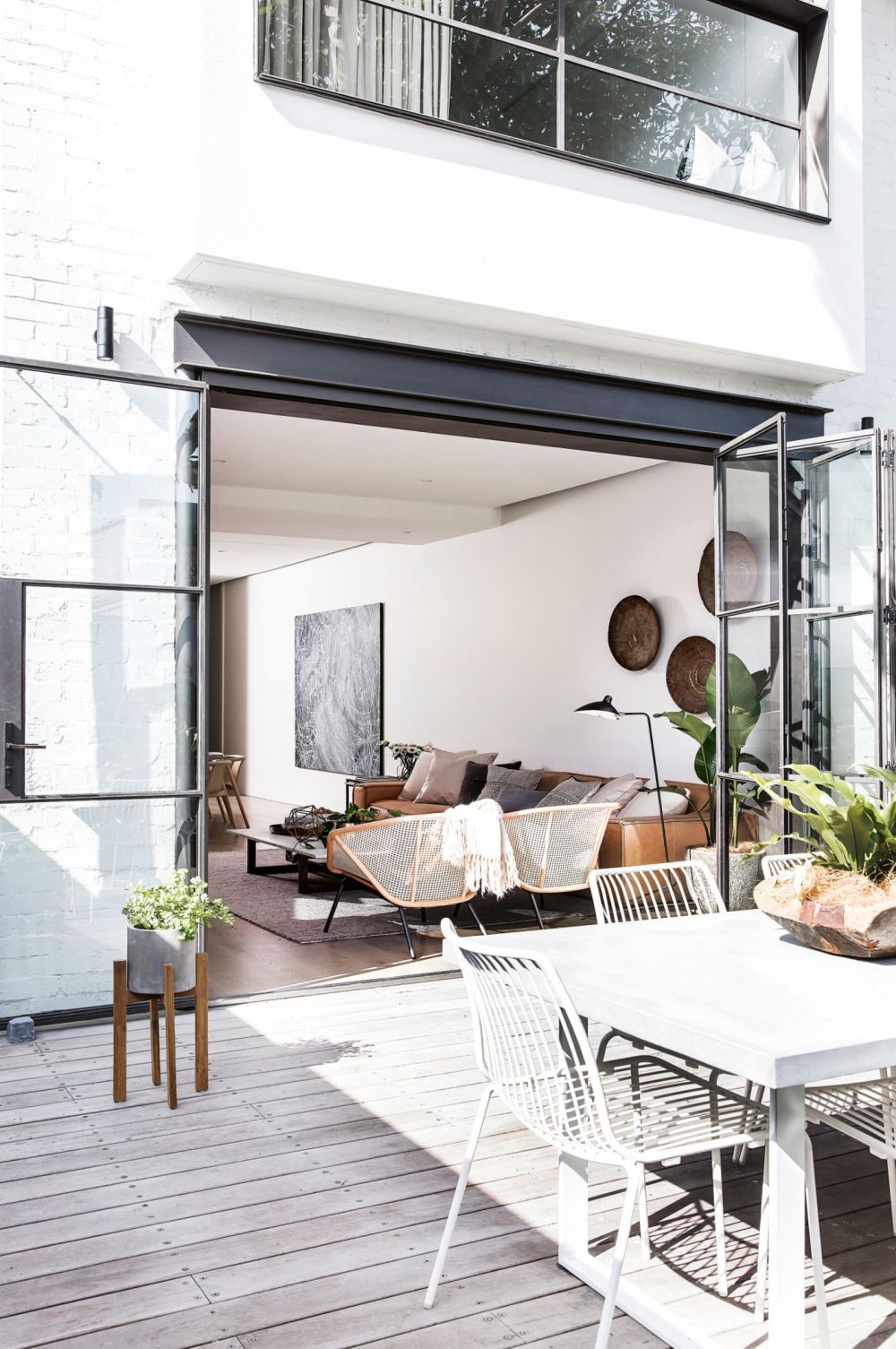 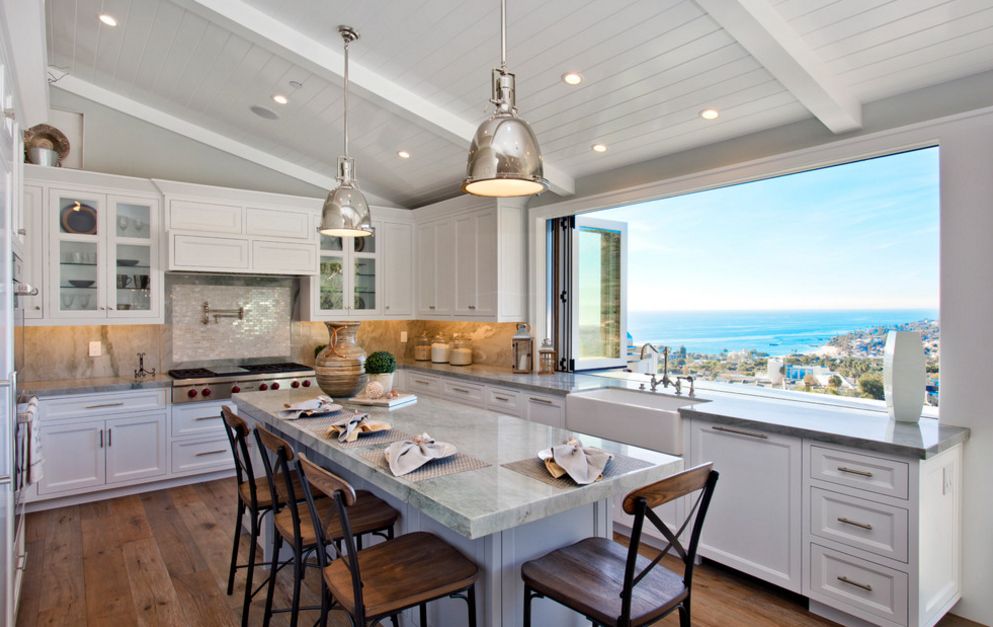 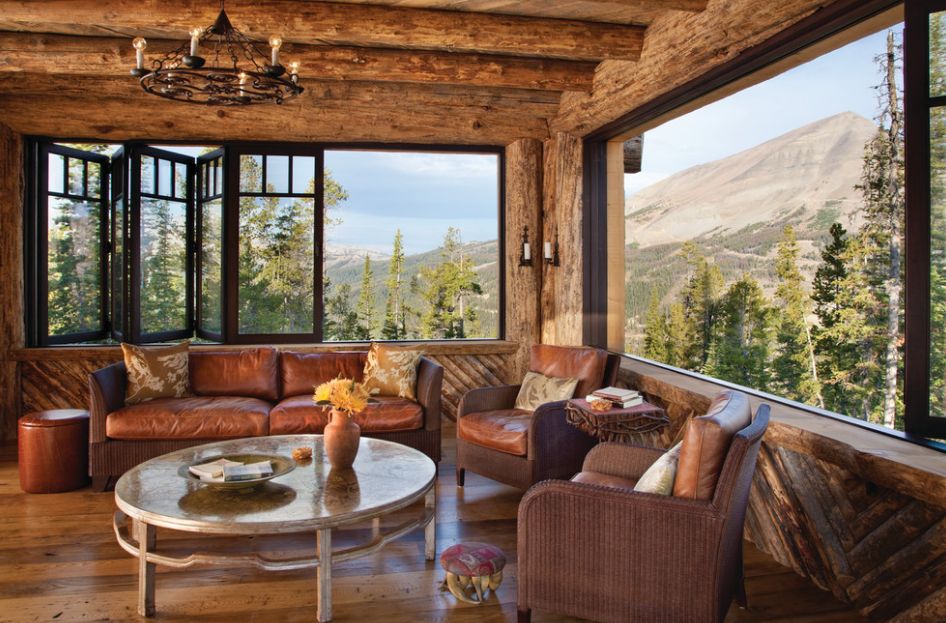 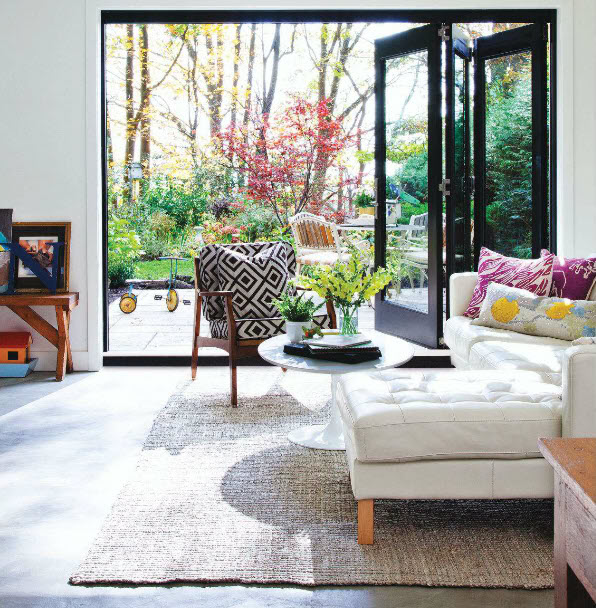 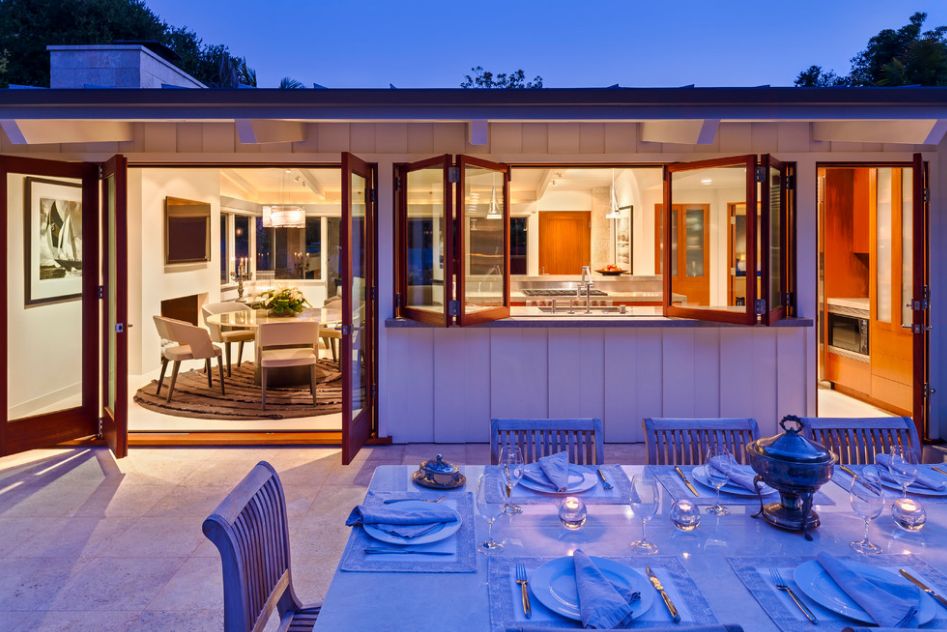 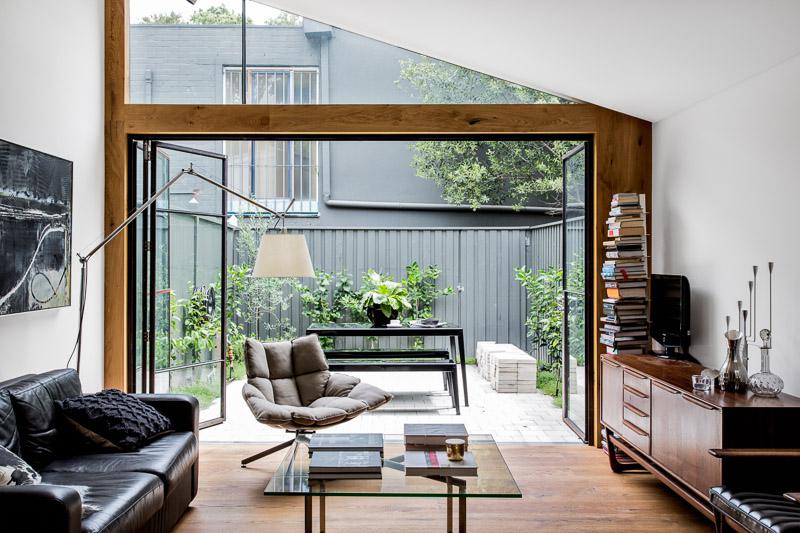 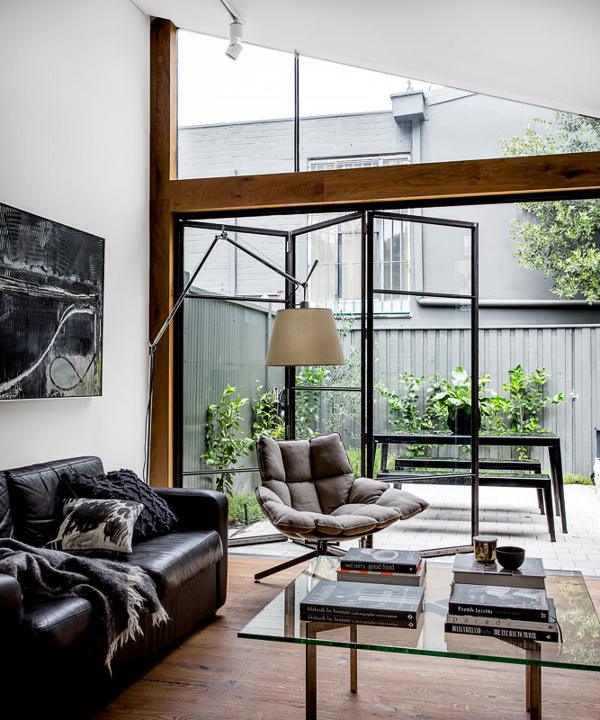 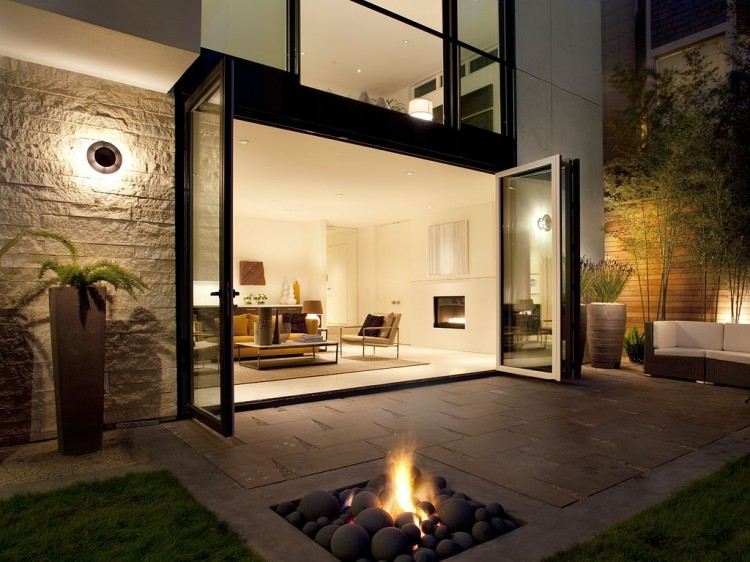 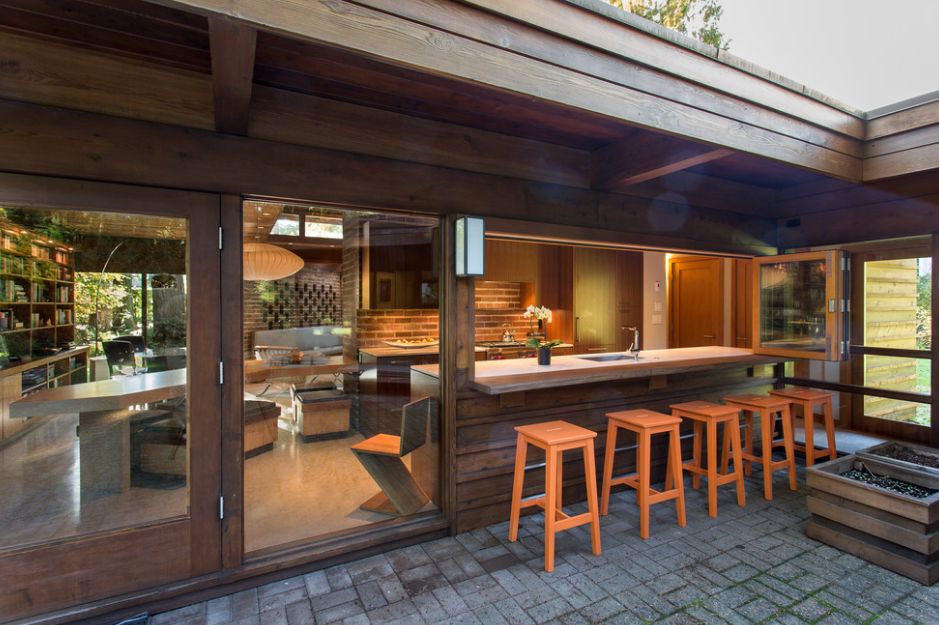 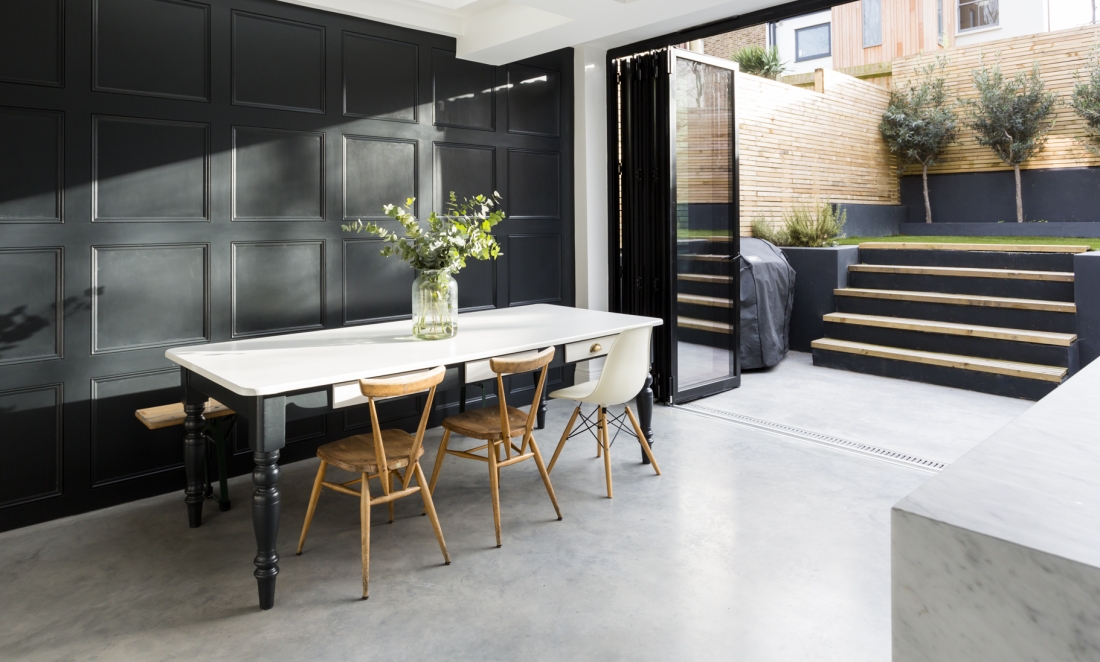 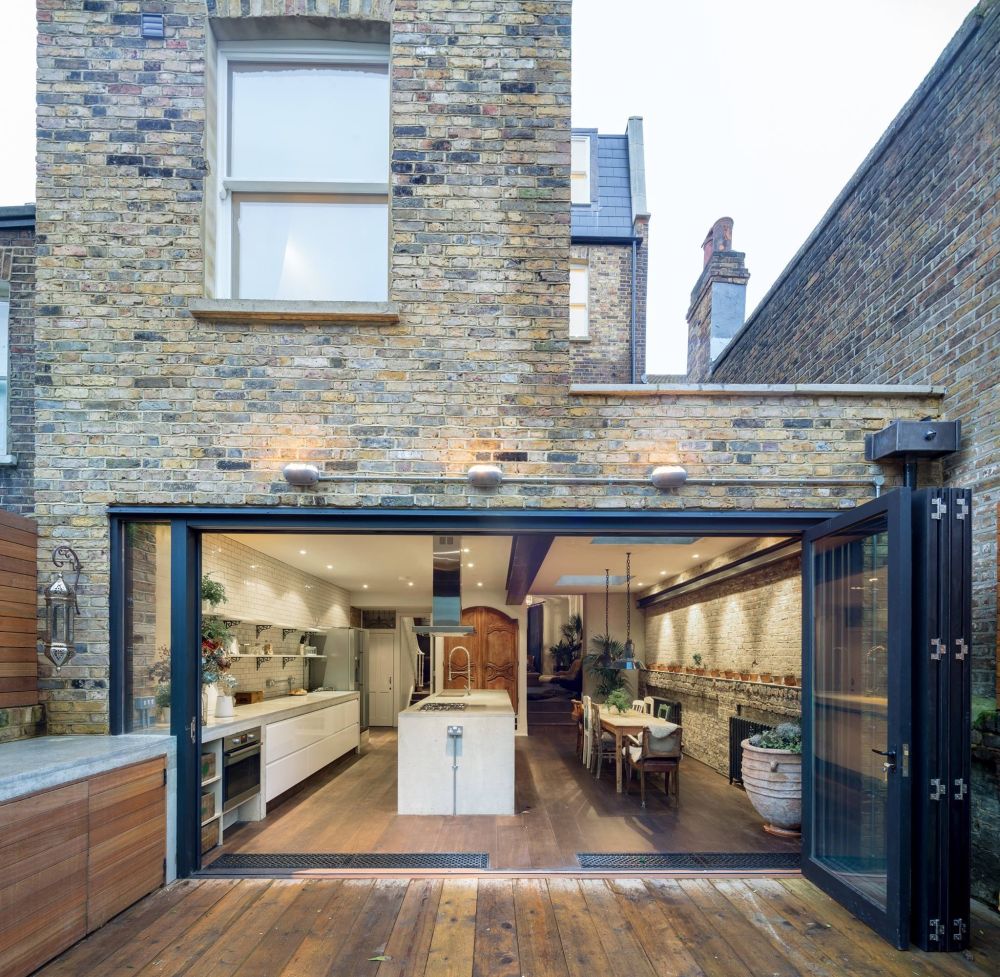 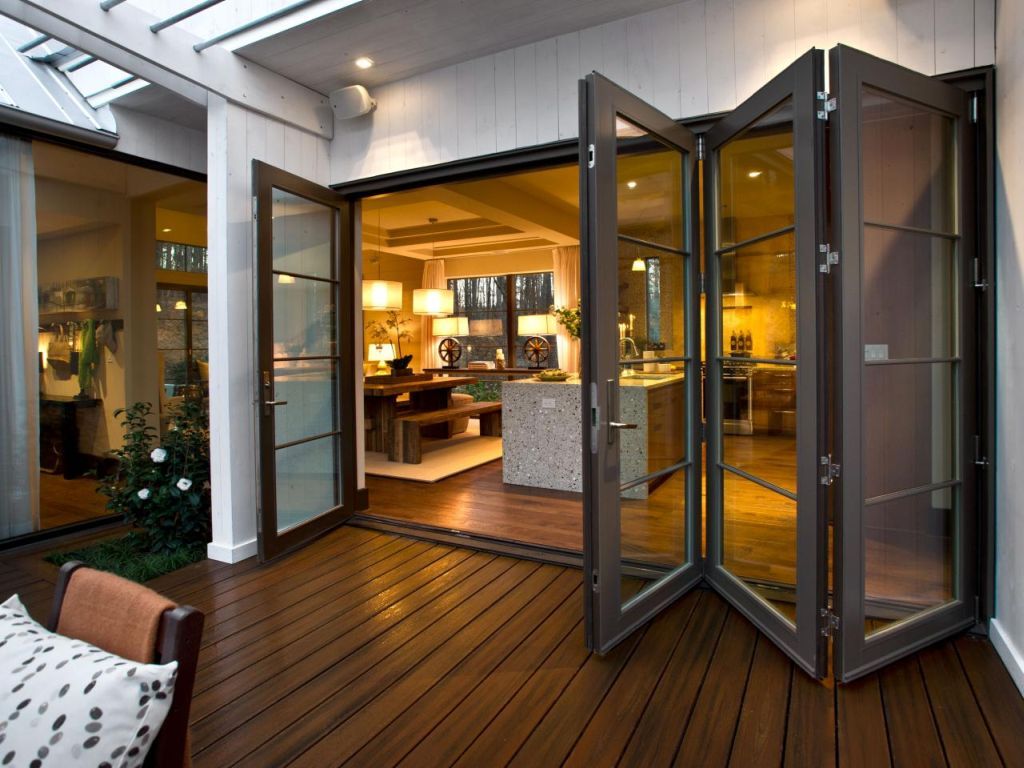 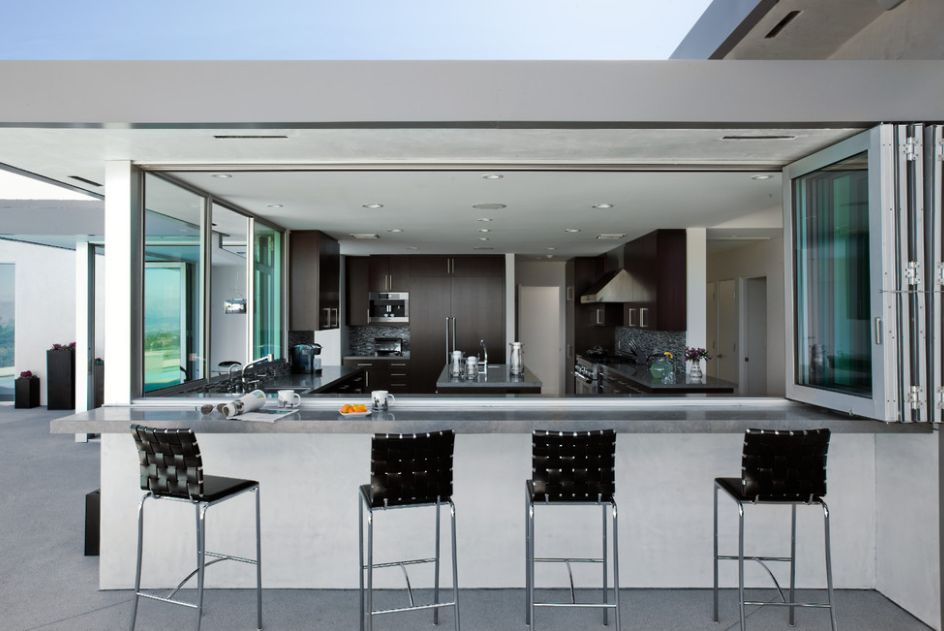 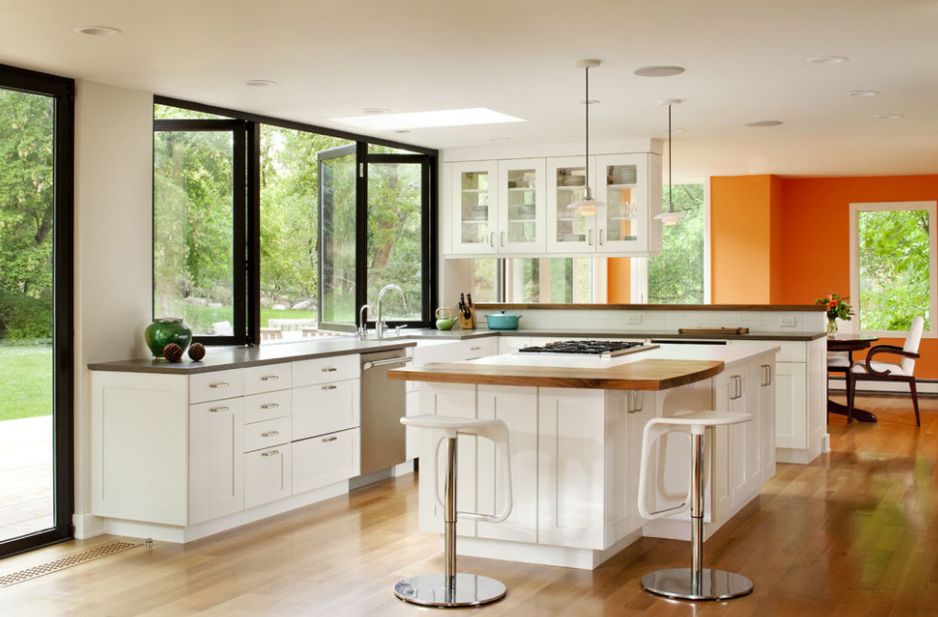 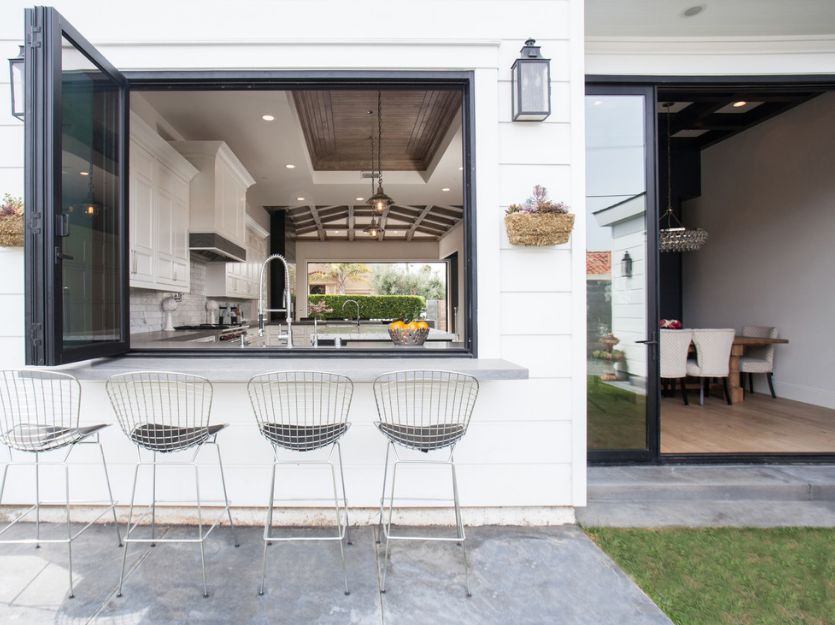 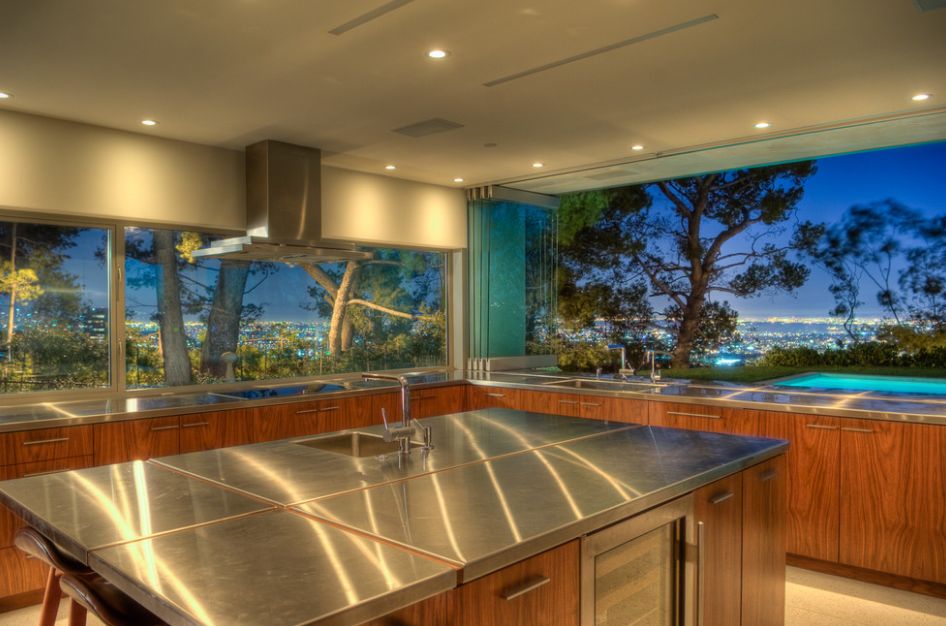 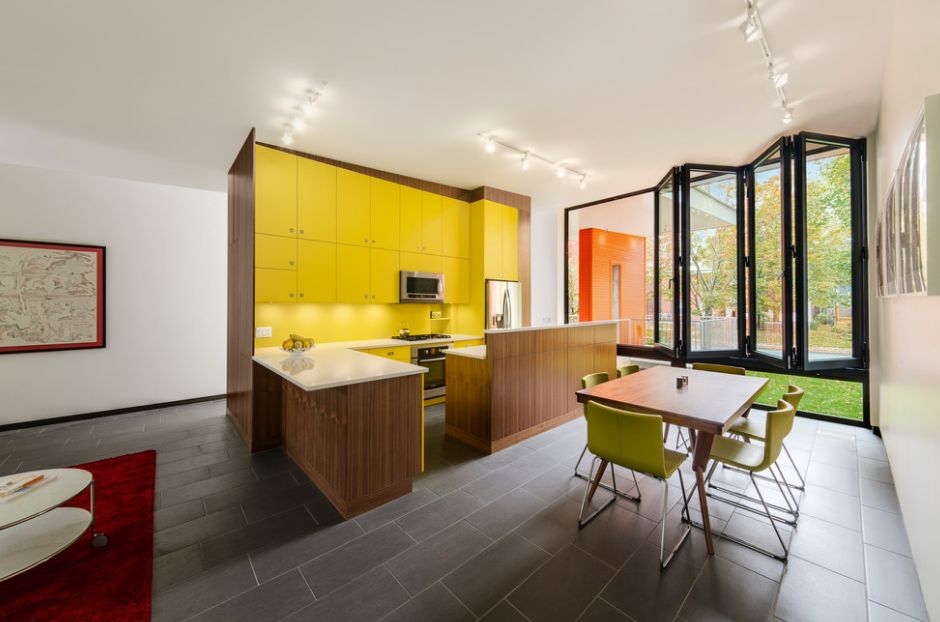 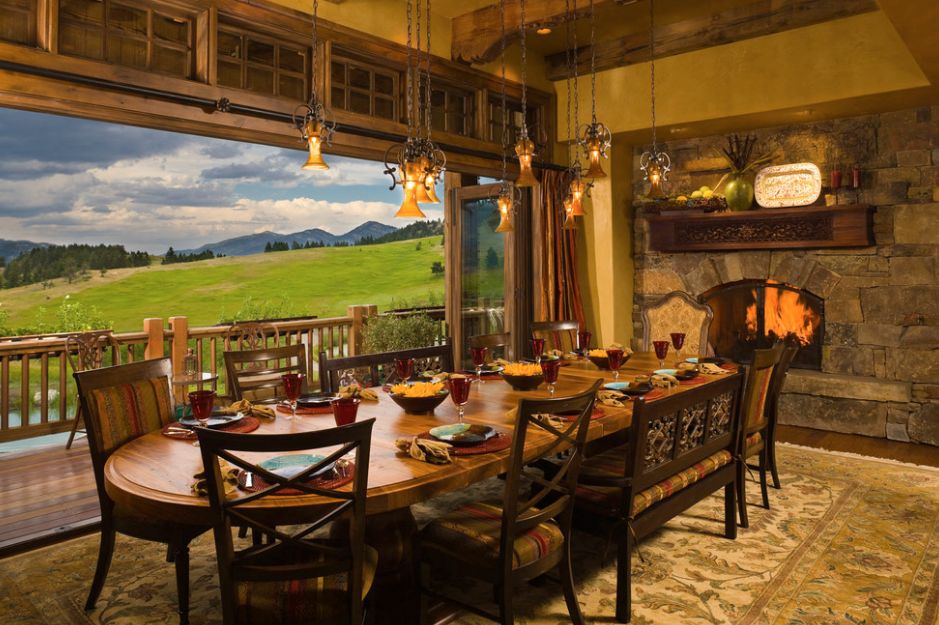 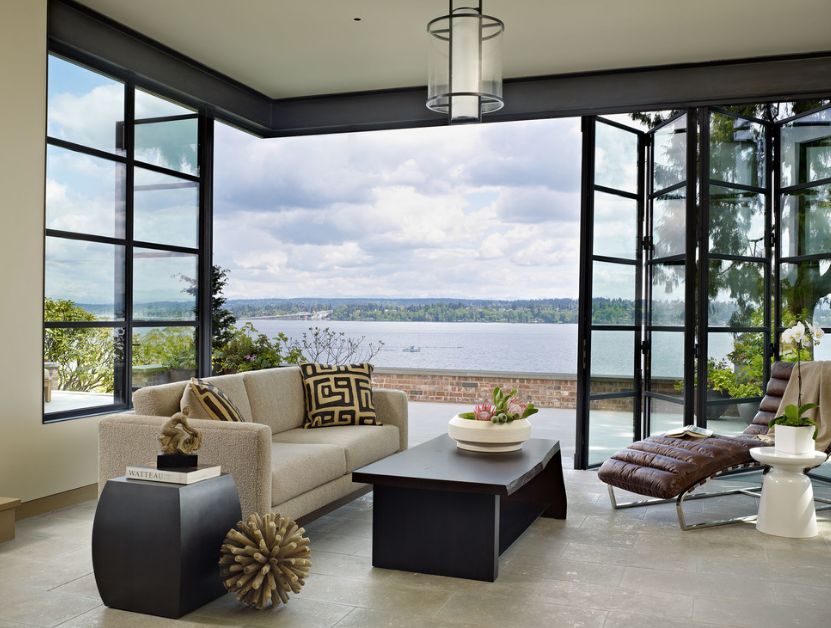 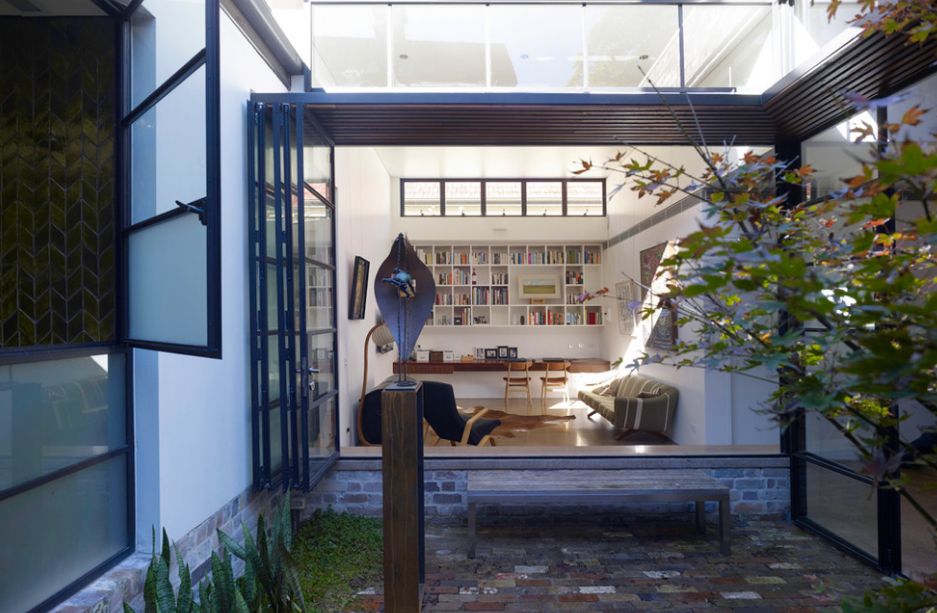 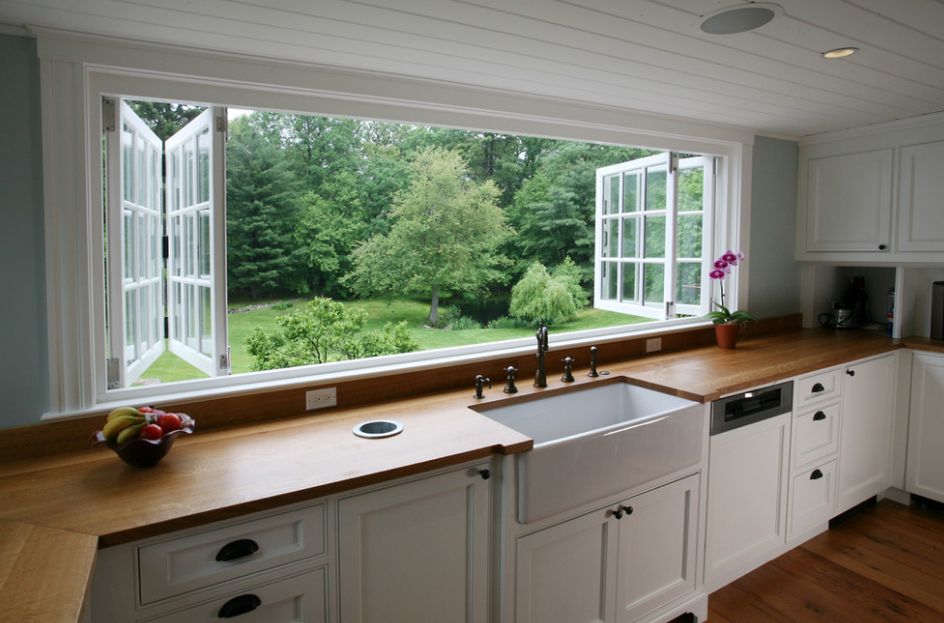 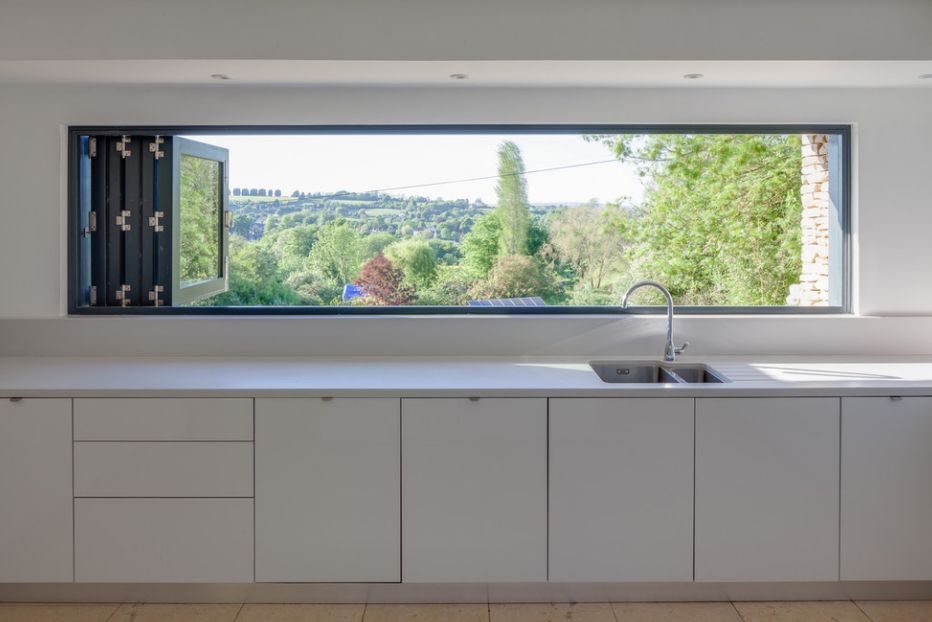 Sometimes called accordion windows because of their resemblance in shape to the musical instrument, these windows are both interesting-looking and practical. Although not as common or as popular as the classical types, accordion windows are sometimes the best option for certain types of settings or decors.

They usually go from floor to ceiling and are used as separators between indoor and outdoor spaces, allowing these areas to become one by eliminating the physical barrier with ease. They can also be used indoors in certain spatial configurations. But let’s have a look at some actual designs to learn more about accordion windows.

You can see the windows here, used to divide a bedroom from a small wooden terrace with panoramic views of a wooded area. The fact that the windows fold and directly connect the bedroom to the outdoors basically brings the view inside and makes it a part of the room’s decor. {found on newzealanddesignblog}.

Accordion windows are a good suit for certain styles. For instance, this industrial-style residence makes these folding doors seem right at home in a decor defined by rugged textures and contrasting materials. Concrete, wood, metal and glass and combined here and the result is a very pleasing one, both aesthetically and from a practical point of view. {found on designtherapy}.

The most common use of accordion windows or folding doors as they’re sometimes called is in settings where they separate an indoor living space from an outdoor deck. A lot of times the goal is to ensure a seamless and smooth transition from one area to another but also to visually connect the space, to let the light through and to welcome the outdoors in. {found on insideout}.

There are also cases when accordion windows are actually used as windows and not as folding doors or screen dividers. In this spacious kitchen designed by Willhoit Construction, for example, you can see that instead of a backsplash, one of the counters features a large horizontal window which can open to reveal a panoramic and unobstructed view of the sea. This is indeed a great use of accordion windows.

A similar design idea was used here by Lohss Construction for a beautiful lodge overlooking the mountains. The traditional, rustic design of the cabin was slightly altered here in order to capture the most beautiful views and to allow the inhabitants to make the most of them.

When they go all the way down to the floor, accordion windows turn into folding doors like these ones. They usually have solid frames with glass panels at the center and they’re not used for privacy. Their role is rather to connect two spaces instead of dividing them while still maintaining a clear distinction between them. {found on marcusdesigninc}.

In addition to the doors than open widely to connect the interior living and dining area to the outdoor terrace, this residence also features accordion windows which further enhance the strong connection between these two areas. This design feature chosen by studio Allen is both practical and stylish.

A lot of modern and contemporary homes these days stand out by reviving their past and by embracing their heritage. In the case of a home with an industrial character, for instance, the presence of metal-framed folding doors or windows could add charm and beauty to the decor while also creating a surprisingly welcoming ambiance. {found on yellowtrace}.

This is a house extension designed by Adrian Amore Architects in Sydney. There’s a lot to love about it, including how open and bright it seems despite the small footprint or the fact that it communicates so freely with the garden and its surroundings thanks to the folding doors. Their thin metal frames let in the light and the views while also completing the eclectic interior design. {found on desiretoinspire}.

There are a lot of reasons to want to visually and physically connect an interior living space to an outdoor deck or terrace. For instance, on a beautiful sunny day you could let in all that freshness inside the house and on a warm and pleasant evening you could open the doors to connect the lounge area to your outdoor fire pit. {found on John Maniscalco Architecture}.

A cool idea that we really felt inspired by is offered by Synthesis Design. Check out this house which has a bar on both sides of the wall. indoors, the counter serves as a kitchen island and outdoors it’s a bar. You can clearly see the difference between the two sections because different materials were used but also because they can be separated by a set of windows whenever desired.

With so many different possible configurations, designs and styles to explore, we can only cover a few of them but you can find ways to adapt and transform these ideas to your own liking. For instance, folding doors were used here to close off the dining area from the courtyard. There’s a big difference in height here so it’s good that the glass doors let the light through or the interior would be dark and less inviting. {found on jjmedia}.

In a way, style is irrelevant when you’re working with something as versatile as folding doors or accordion windows. Western Window Systems offer a variety of options which work great in a variety of settings and configurations, from rustic lodges and cabins to contemporary residences or glamorous beach homes. It’s all about perspective.

The windows are usually a focal point, unless they’re very large in which case the view becomes the main attraction. However, the windows themselves can sometimes stand out and a pretty good example can be this modern home by Melton Design Build. It’s open and bright and mostly decorated with white. the accordion windows in the kitchen have black frames and this allows them contrast with the rest of the decor and to showcase their uniqueness.

Remember that kitchen island – bar combo we talked about earlier? Here it is again but this time in a contemporary setting. As before, the outdoor is designed to look like an extension of the kitchen counter found inside the house. when the accordion doors are open, they become one. It’s an adaptation by Gonterman Construction.

It would be a real shame to waste and hide such beautiful views so Bertram Architects found a way to bring them inside this spacious kitchen. They used accordion windows without vertical frame panels and this allowed them to keep the view intact and unobstructed. Of course, the impact is much more dramatic when the windows are open.

If possible, it’s always nice to have a close and strong connection to the outdoors, whether it’s through large windows, sliding glass doors or folding doors. You can also bring a little piece of the outdoors in by choosing a color palette that reflects the surroundings or certain textures and materials found in nature. {found on kariouk}.

It’s usually the remote locations that offer the most wonderful views. But not a lot of cozy and rustic wooden cabins have huge windows or sliding glass doors. Those are usually for contemporary residences. But that can change if one so desires. Check out this beautiful design by Locati Architects. It’s something else..

Once again, folding glass doors come to the rescue to open this beautiful house to the views and its mesmerizing surroundings. It’s a project by DeForest Architects which we find inspiring. We love the casual decor and the simplicity of the materials, colors and textures involved.

Like the examples featured so far have shown, accordion windows are most popular in kitchens. They replace the usual backsplash with a view of the garden, the courtyard or the city and they let a lot of natural light in which is always desired in here. {found on archiahomes}.

Use accordion windows when you want to reveal a view that would otherwise be hidden behind a solid wall or when you just want a closer connection with the outdoors. in kitchens, these windows can be positioned in front of the counter so you can enjoy the view while working. {found on mhworkshop}.