When you hear someone saying they’re going to the library you’re probably imagining an old-looking space with dusty books on wooden shelves. While you can probably still find places like this, the modern library is actually an awesome space, some libraries actually featuring extraordinary designs that make reading seem cool and that make you feel like a Harry Potter character. Don’t believe us? Check out these amazing libraries from around the world.

One of the most amazing features of the cultural center in Tianjin, China is this extraordinary library which has undulating bookshelves cascading down the walls and ceiling, creating a whimsical ambiance. The library wraps around a large spherical auditorium. Both the sphere and the shelves light up, giving this library a spectacular look. The design was a collaboration between MVRDV and Tianjin Urban Planning and Design Institute. The library holds 1.2 million books.

The beautiful Cărturești Carusel library is located in Bucharest, Romania and is a landmark in the historic center of the city, featuring an aristocratic interior design with lots of charm and character and a multitude of books, reading nooks and also an art gallery. The building dates back to the 19th century and used to function as a store during the communist period.

The Old Library at Trinity College in Dublin, Ireland has this amazing Long Room where 200,000 of its oldest books are kept on super tall, two-story high shelves that frame a stunning barrel ceiling. The library was built between 1712 and 1732 and the ceiling was added in 1860 with the intent to create more space for books when the existing shelves became full. Even today the design is impressive and quite breathtaking.

Admont Abbey located in Admong, Austria is famous for its beautiful Baroque architecture, art and manuscripts but also for the fact that it has the world’s largest monastic library. The space is located in the east wing of the abbey, it’s 70 meters long, 14 meters wide and 11 meters high.

None of these space comes even close to any home library but some actually look out of this world. One example is the Royal Portuguese Cabinet of Reading, an institution created in 1837  and the objective of which was to promote culture in the Portuguese community from Brazil’s Rio de Janeiro, a city which back then was the capital. the library in this place is absolutely extraordinary, with shelves that don’t even reach the ceiling but look dramatic nonetheless.

If you’re ever looking for places to visit in Munich, check the Municipal Law Library. Its name isn’t at all exciting but wait till you see the interior of this place. This is one of the most beautiful libraries in the world and it’s open to the public. Just look at those intricate and delicate railings and the beautiful spiral staircase. They really give this space a magical feel.

Bibliothèque nationale de France is one of those structures which can really make someone feel small without also feeling insignificant. The library is located in Paris, France and originally opened to the public in 1692. In 1988 the construction and expansion of the structure was announced. It maintains some of its original, historical character while successfully adapting to the modern world.

Stadtbibliothek Stuttgart, the public library in Stuttgart is a huge, bright space with bookshelves covering its exterior walls on several levels and with a big void at the center. The walls, floors, ceilings and staircases are all white, giving the library an immaculate look. Blue sofas and benches break the monotony and add a touch of freshness and serenity to the spaces which prevents the white decor from becoming tiresome.

El Ateneo Grand Splendid located in Buenos Aires, Argentina is an eclectic building with elements which make a hybrid between a theater, a museum and a library. It was designed by architects Peró and Torres Armengol and it has ceiling frescoes painted by Italian artist Nazareno Orlandi. The building opened as a theater in 1919. It was then converted into a cinema and after that it was renovated and converted into a book and music shop.

This is Bibliothèque de l’Hôtel de Ville, located in Paris, France. It’s the city’s first public library and it opened its doors in 1763. To reach most of the bookshelves in this place you need a library ladder. The ceiling is the biggest focal point of the library, giving the space a mysterious and at the same time familiar look.

Situated in the historic centre of the University of Coimbra, the Joanina Library is special not only because of its baroque design and the paintings on its ceilings but also for one other more unusual reason. This is one of the only two libraries in the world whose books are protected from insects by a colony of bats which live inside. The bats eat the insects every night and every morning the library is cleaned up. All the furniture is covered with leather sheets every evening. This is a rather peculiar way of keeping the books in top condition.

Although it’s one of oldest and most beautiful libraries in Europe and in the world, very few images of the Duke Humfrey’s Library actually exist. The library was built in 1487 and contains old and priceless books and manuscripts, including a Gutenberg Bible and gospels of the Bible from the 3rd century. The interior of the library is truly impressive, as you can see here. 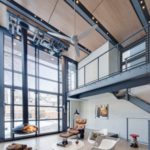