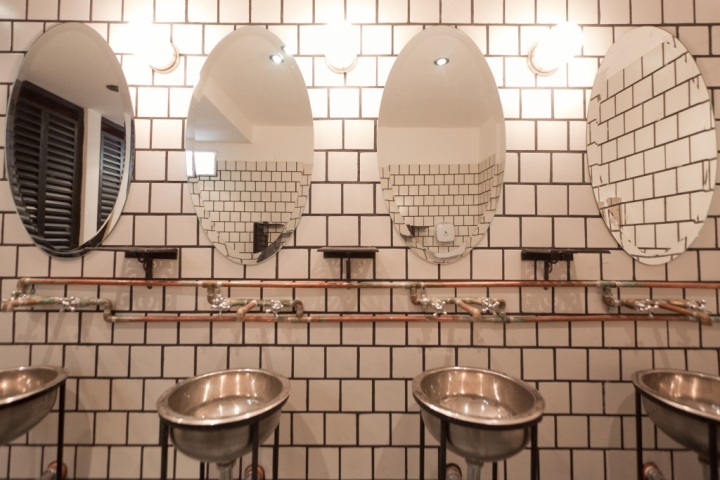 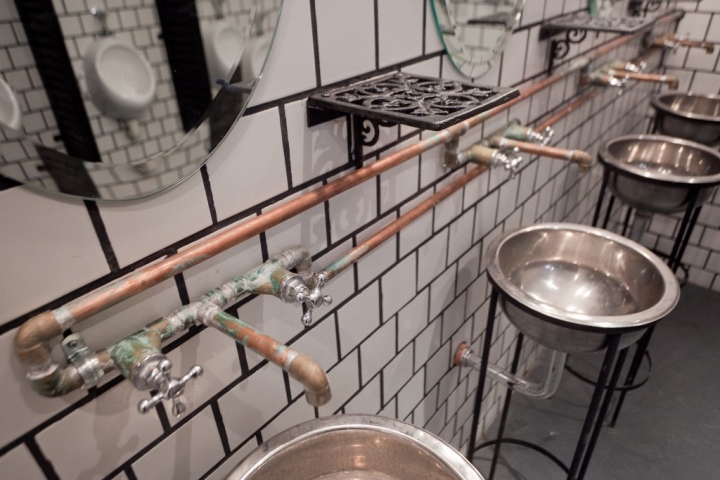 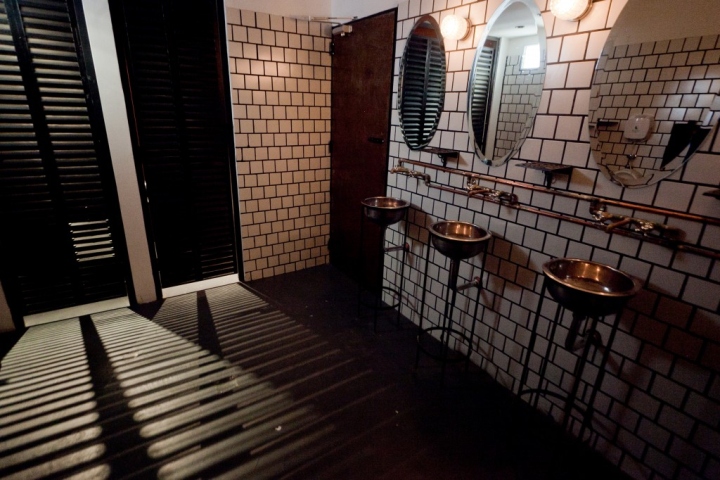 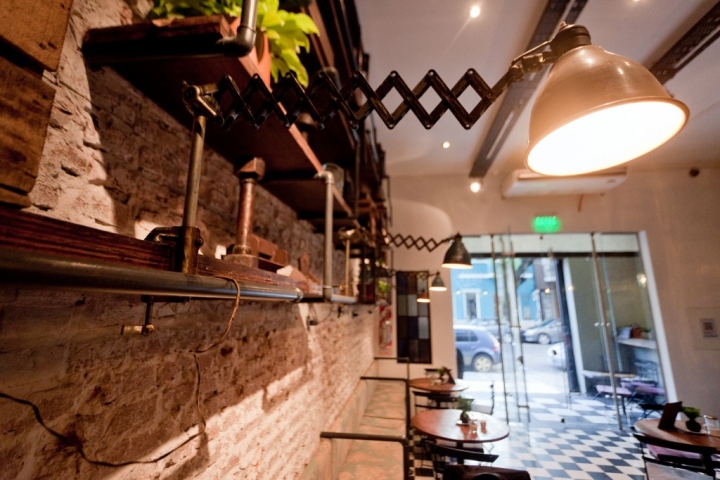 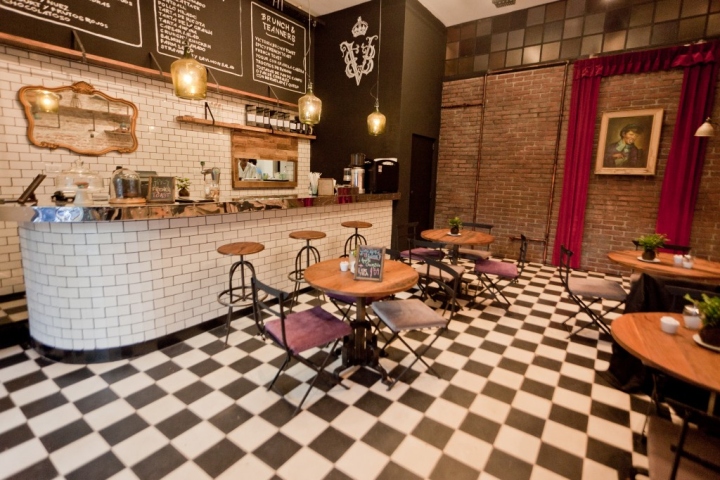 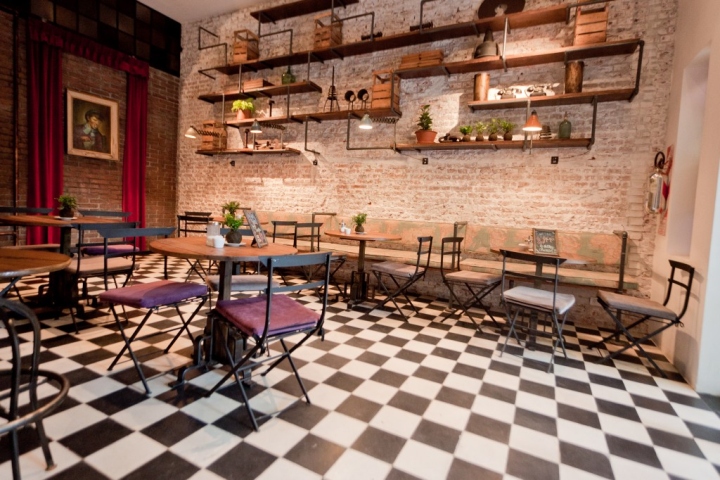 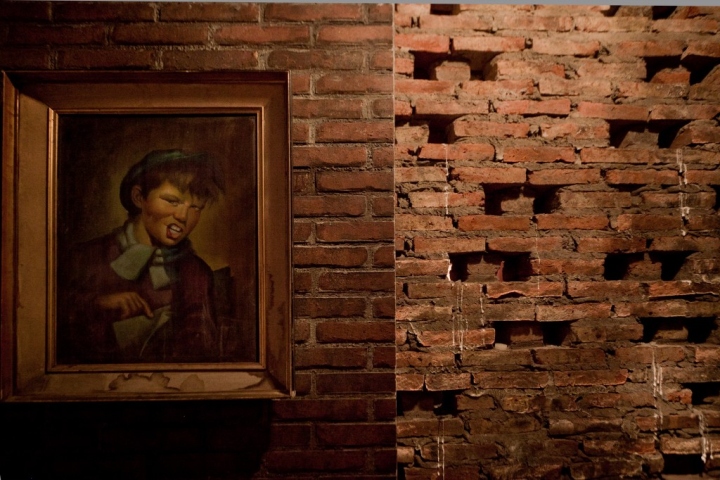 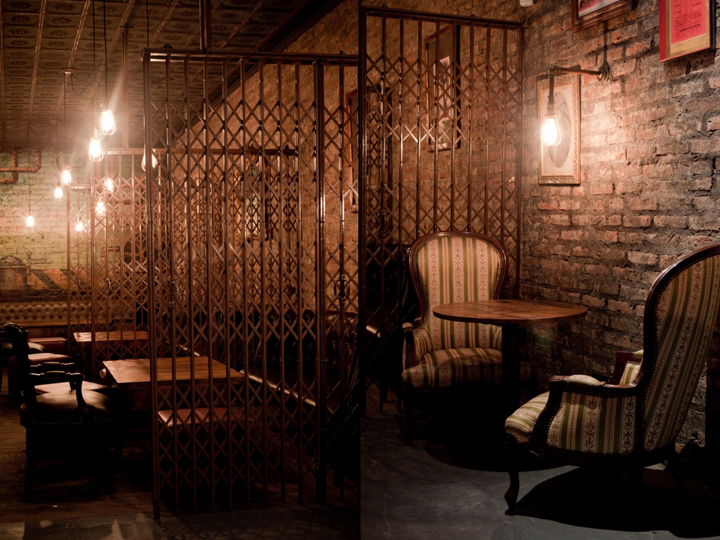 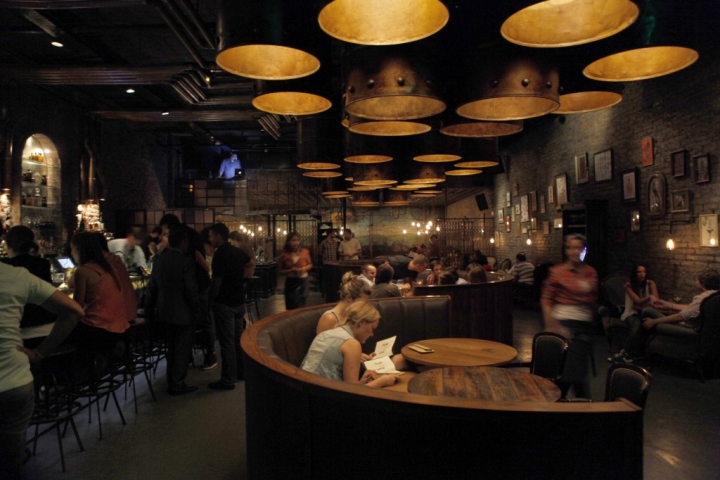 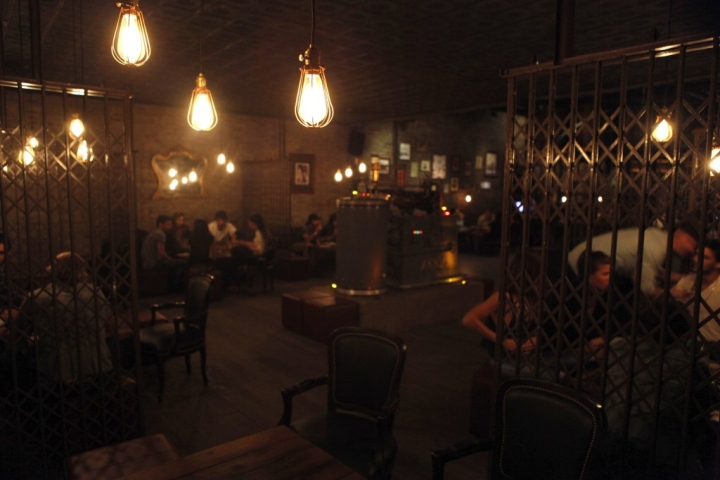 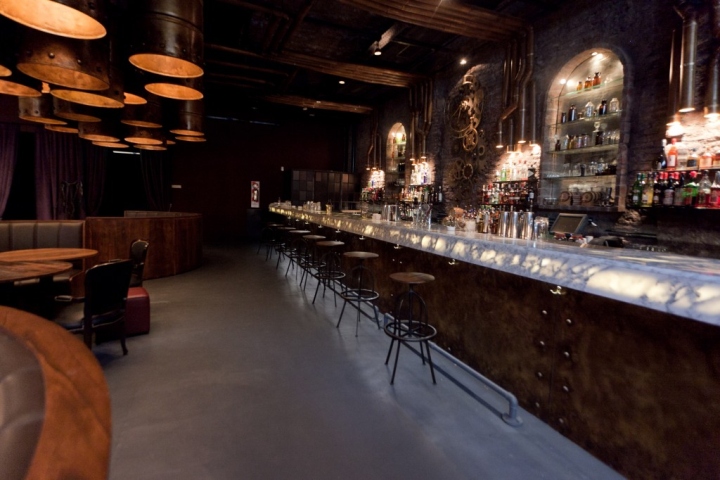 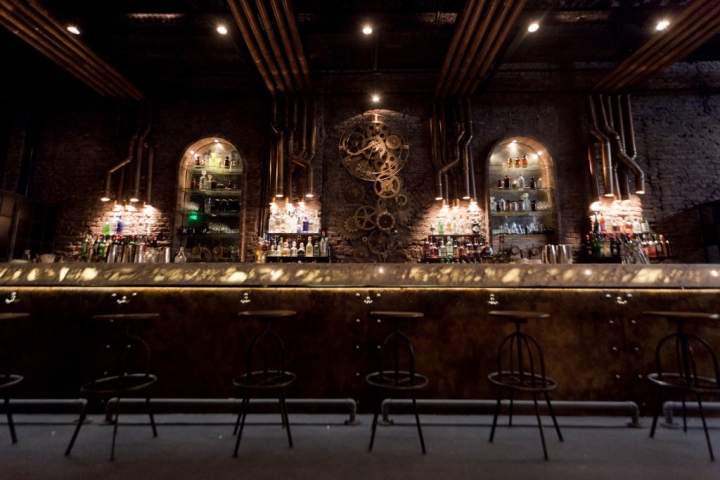 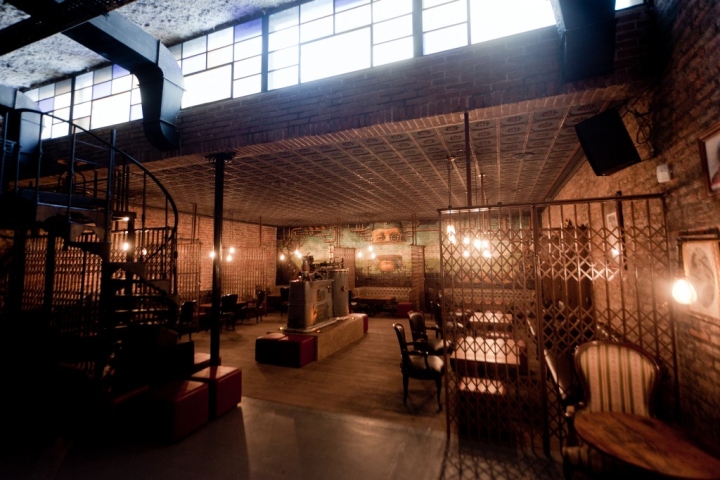 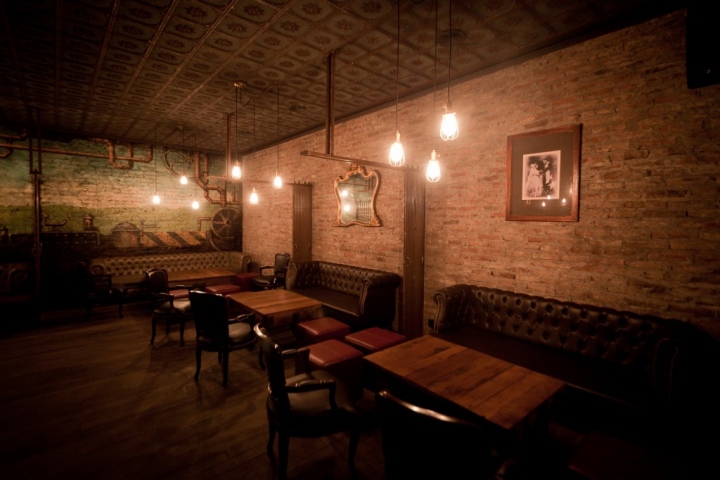 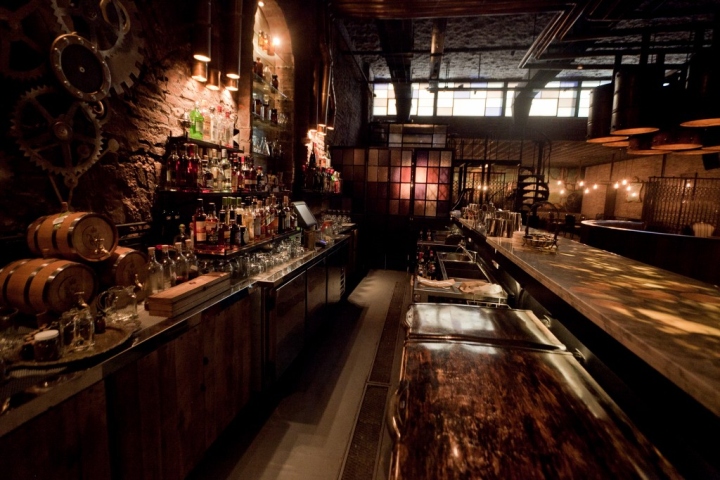 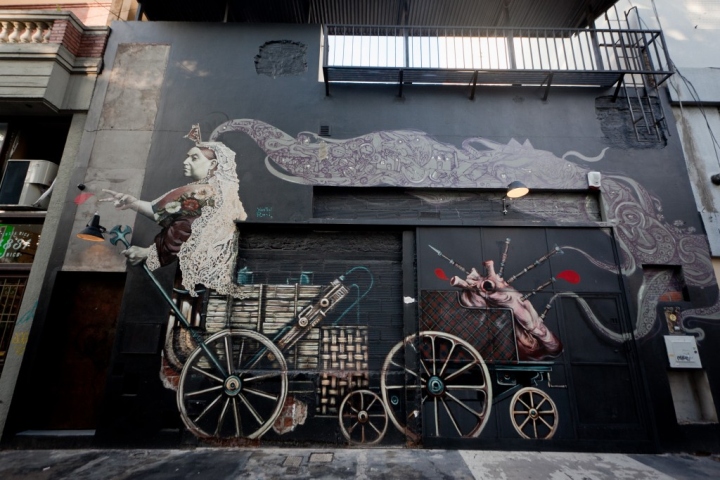 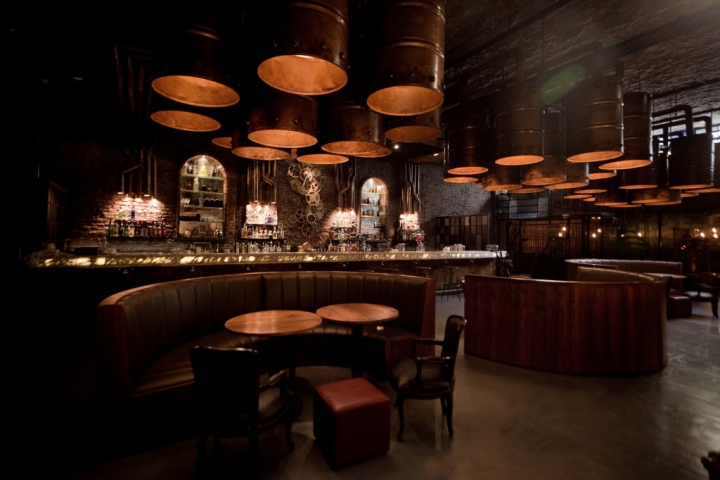 Victoria Brown is a coffee shop, bar and a restaurant located in Buenos Aires, Argentina. It was a project by Hitzig Militello Architects completed in 2013 and it involved converting an abandoned warehouse into a welcoming space with a steampunk theme.

A heavy, sliding iron gate covers the facade at night. It’s covered with graffiti representing Queen Victoria. The black background suggests that the interior is not particularly bright or vibrant.

The space was modeled after the client’s personal style. Industrial and contemporary elements classified as steampunk were put together and used to offer this space a lot of character.

There are certain challenges that the architects had to deal with. For example, only a portion of the warehouse could be used for the project and the spaces had to be linked together through design and décor elements.

The former warehouse needed insulation so a surrounding brick wall was built to solve the problem and stay within the style chosen for the interior. The ceiling was insulated as well.

Three central stations were established inside and they were divided by metal screens. This ensures that the industrial essence stays strong throughout the spaces and also that there’s a certain cohesion overall.

A long bar is set along one of the walls and vintage bar stools complement its facade. The backdrop is a brick wall with niches and accent lighting embedded in them to offer a warm but subtle and also somewhat dramatic look.The wall in front of the bar is decorated with antiques gears and metallic elements which emphasize the steampunk look created throughout.

Edison light bulbs offer a warm and intimate glow to the restaurant and, as always, pair really well with the overall industrial look of the whole space. their distinctive shape and design also offers them a subtle antique aura which is reiterated throughout the restaurant and bar in various different ways.

Structural welded tubes are hanging from the high ceiling at the center. They hold 12 old industrial barrels which have been converted into lighting fixtures. They’re heavy but the warm light gives them a less imposing look.

The restaurant portion of the former warehouse has a design and ambiance that in a way is reminiscent of medieval castles. Antique furniture, ornate armchairs, dividing screens and the use of dark finishes and exposed brick together with hanging bulb lighting fixtures give this space a really comfortable and pleasant atmosphere.

The interior walls are decorated with framed advertisements of old films and other similar accent features. They look great when displayed on the exposed brick walls and in faint light.

One area is particularly bright. The black-and-white checkerboard flooring and the heavy red curtains give this space a theatrical look. The furniture is simple, with thin metal frames and worn finishes, pipe shelving on the brick wall and light fixtures that extend outward.

A smaller bar with white subway tiles wrapping around it has a metal countertop and the wall behiind it matches its design.

The overall design is similar to that of an old 19th century factory but, at the same time, it also has a bit of modern charm as old and new design elements meet and complement each other harmoniously.

No area has remained untouched by the impressive makeover. The bathroom makes no exception. A row of round, metallic washbasins are placed along a wall and exposed pipes and vintage faucets complement them.

Simple, oval mirrors were mounted in front of each of them. This is the contemporary part of the décor.