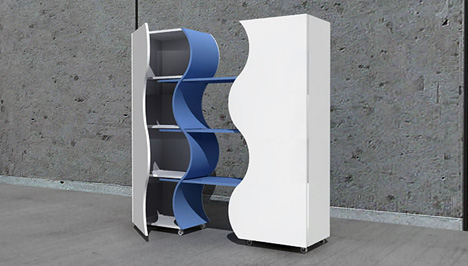 Normally furniture is made to be permanent and not changed ; I mean it is not dynamic. However, every once in a while some imaginative designers dare make some very original works that can be used in time, even if the conditions change. For example these twin shelves by Zeynep Cinisli actually look like a wardrobe when they are close to one another. You can store anything on the shelves inside, but once you separate the two halves of the wardrobe, you realize they are actually linked by three bookshelves that can be expanded when you have a growing book or CD collection.

The inside of the two halves is painted in blue in order to make very clear that the wardrobe space – which is totally white – ends where the blue border begins and you can bring the two separate halves further and further away from one another until the end of the boards that are stored inside the wardrobe. 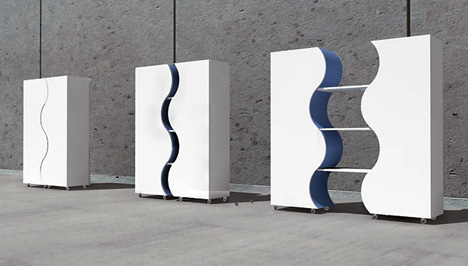 But apparently there’s more to it than simply a wardrobe split in half – it stands for the twin halves of Istanbul, the only city in the world that is located on two continents – Asia and Europe. Even though the two separate worlds may seem very different, they are actually very much alike. So if you buy one of these beauties you will get a piece of furniture and a metaphor for the same price.