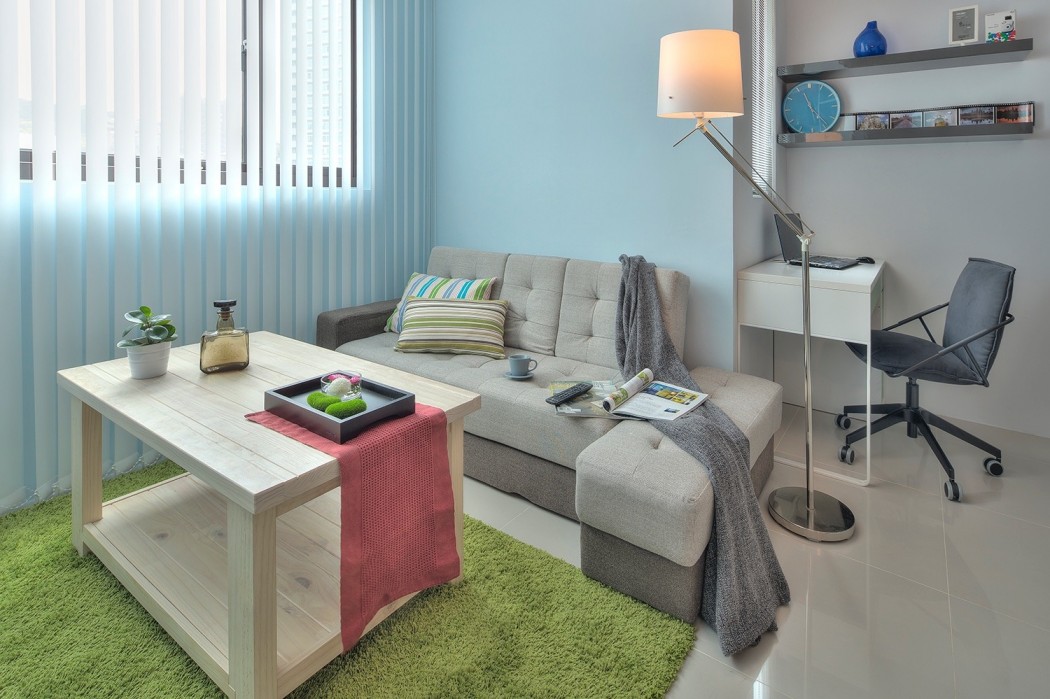 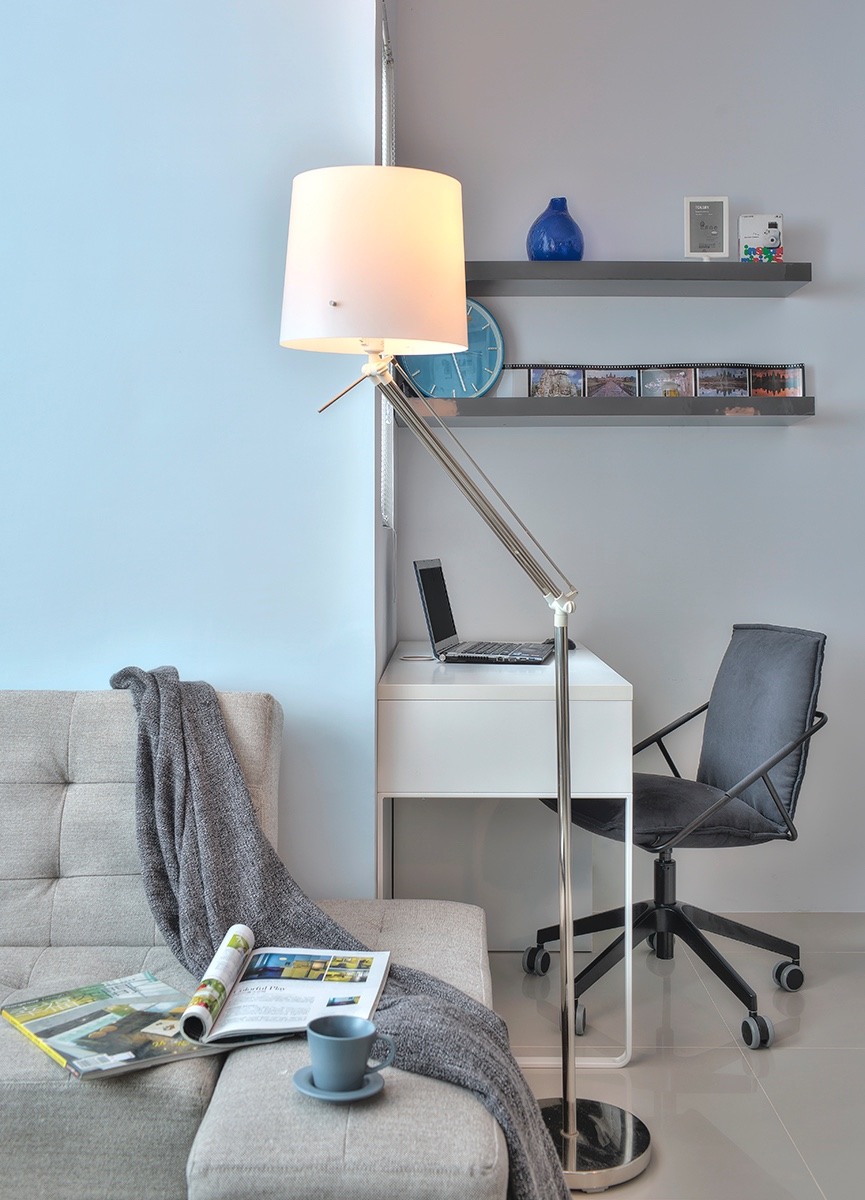 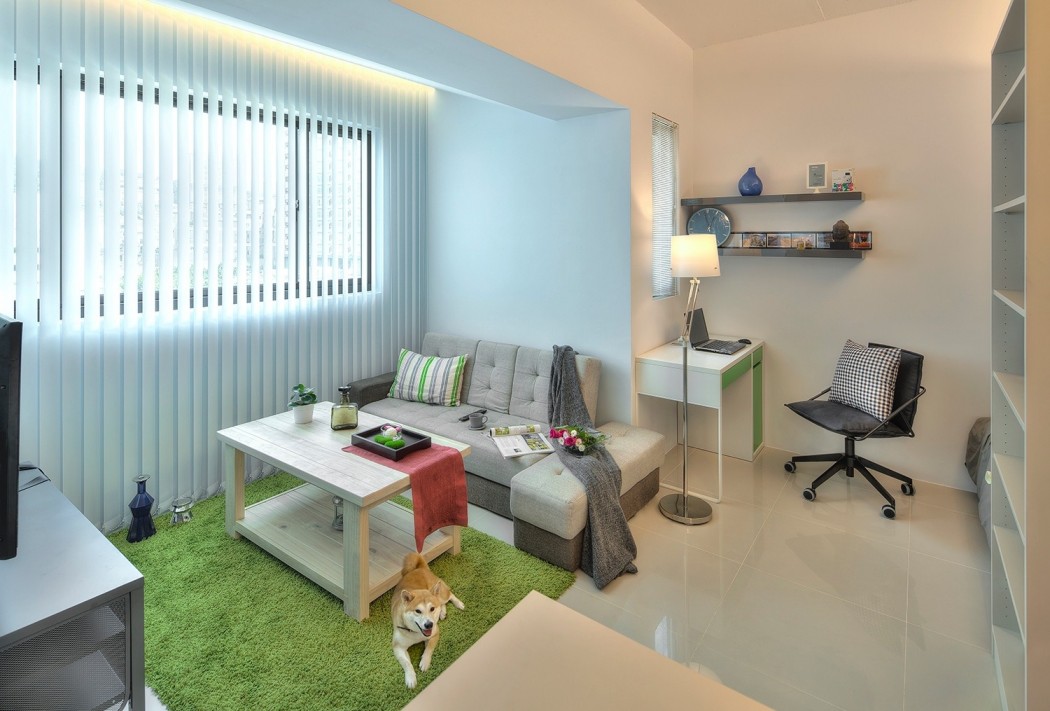 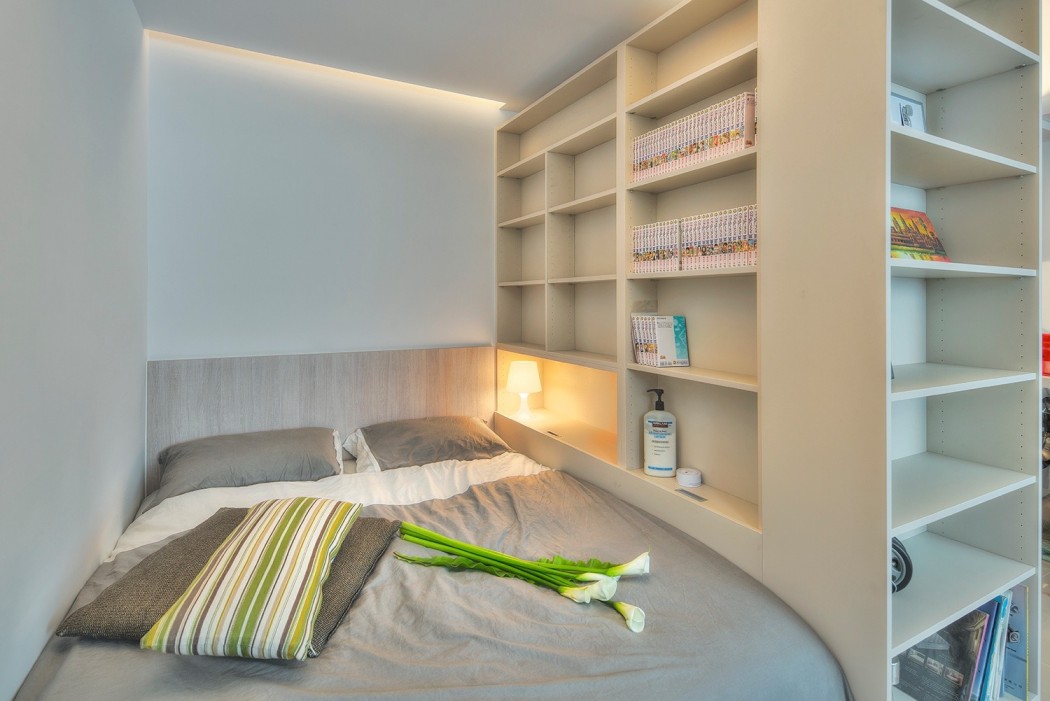 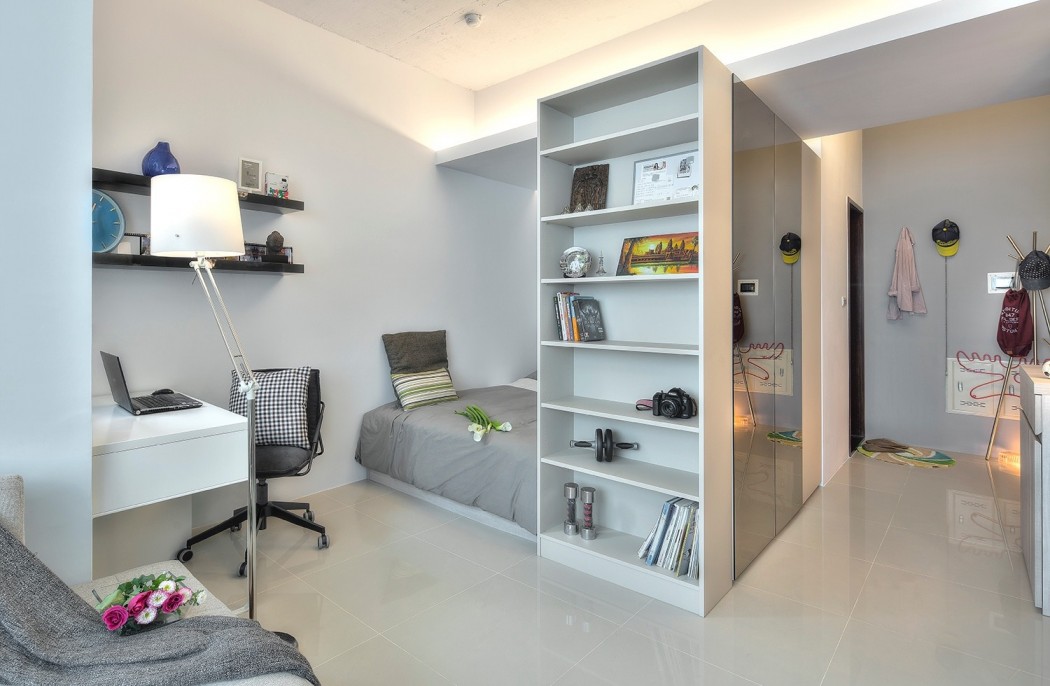 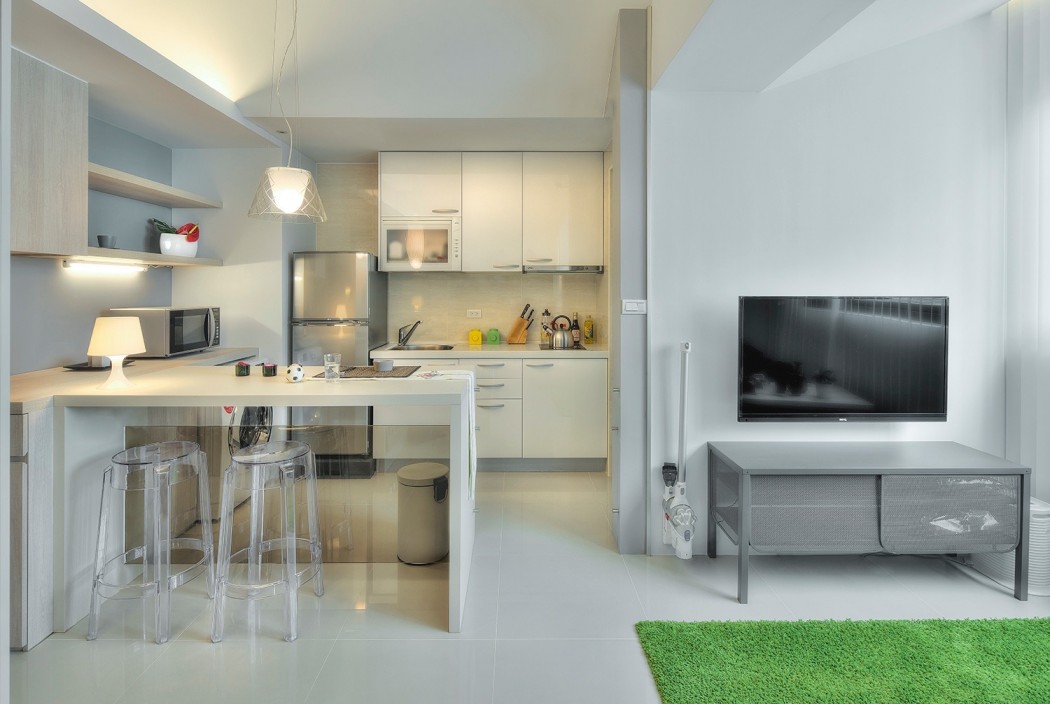 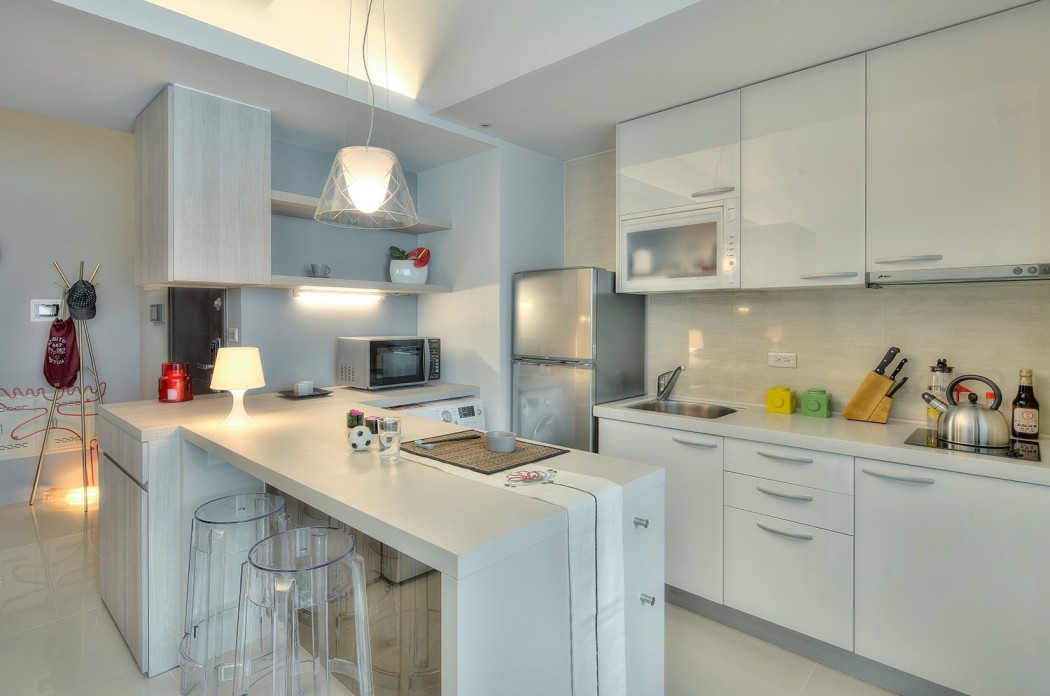 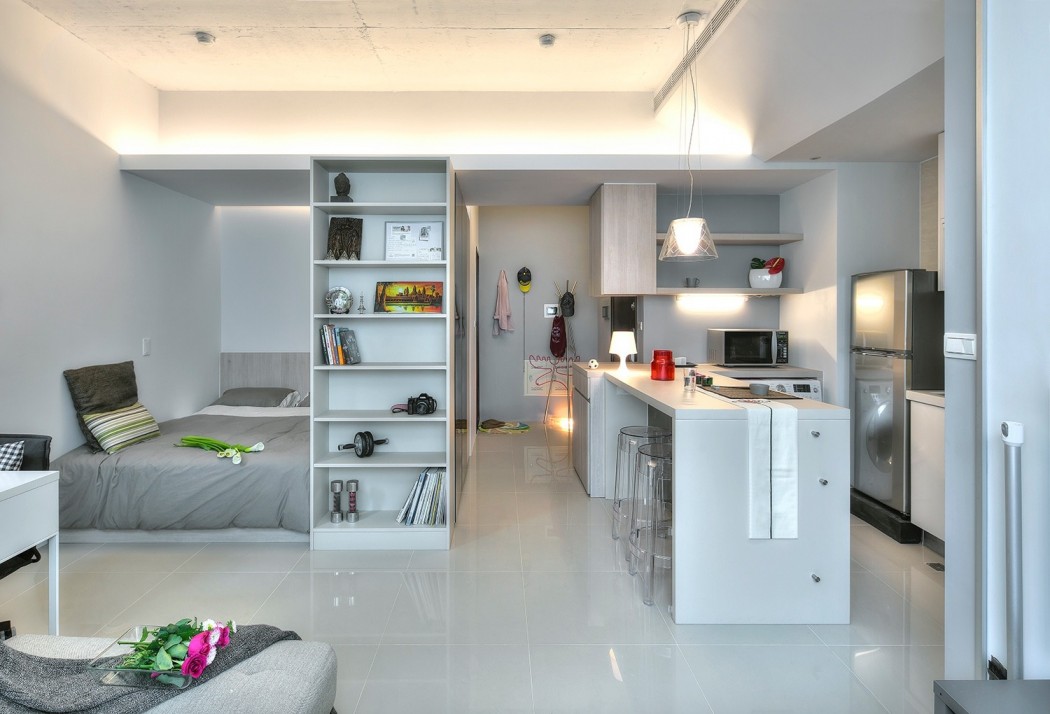 Located in Taipei, Taiwan, this small apartment was designed in 2014 by Cloud Pen Studio. Given the very limited floor space, the team had to be inventive regarding the interior design. To successfully decorate a small studio such as this one, you need carefully assess very detail and to make sure the balance is just right.

All the apartment’s functions share the same open floor plan. The sleeping area, the kitchen, the dining space, the home office and the living area were all combined in s truly cohesive and organized design. There was no need to sacrifice any important features.

The kitchen is not as tiny as you might think. Actually, it’s a really practical space with built-in appliances, plenty of storage both inside the lower cabinets and the upper compartments and shelves and the kitchen island doubles as a dining table and as a bar.

The color chosen for the kitchen is white infused with a few grey accents. This mix, in combination with great task lighting ensure an airy and pleasant ambiance. It’s actually the entire apartment design that shares these characteristics.

On the other side of the room, across from the kitchen, is the sleeping area. A wall of closets visually separates the two, offering privacy for the bedroom. The unit ends with a series of open shelves which cleverly doubles as a storage system for the tiny home office. It has a mirrored finish which reflects back the whole kitchen area, creaeting the impression of a much larger space.

The side of the unit which faces the bed also offers a series of shelves. The lower ones act as nightstand replacements while the rest are used for storing books and other objects. The rest of space is entirely occupied by the bed.

It’s really beautiful how one element of a particular area doubles as a feature for an adjacent function and the transition between them becomes seamless. Another examples is the floor lamp which is placed between the desk and the sofa. It’s an accent feature for both areas.

The small open space living area is composed of a modern sofa and a simple coffee table. A green area rug delimitates the space and gives it a cozier vibe.

Facing the sofa, on the opposite wall, is a console table and a TV. Cove lighting is used to give out a warm and comfortable look, just like in the sleeping nook. Although each of these spaces has its own character and they are all clearly different from one another, they also interact with each other and form a compact and welcoming home, really chic and not bad at all for a single person.