The fireplace is usually the center of attention in a living space. So it’s important for this feature to look attractive and to match the rest of the décor. But what happens when the fireplace starts to look out of place or outdated. That should be an incentive to give it a makeover. You can easily update a fireplace with tiles and the following project can show you exactly how such a scenario would work.

This is a fireplace that used to look ok but which became outdated. As a result, its owners decided it was time for a makeover and chose to use marble tiles for the project in order for the fireplace to match other elements in the house. After the old tiles were taken down, the whole surface was sanded for a smooth finish and then the marble tiles were attached.

Glass tiles are also a stylish and versatile option. A great fireplace makeover that uses these is featured on magentaandlime. The first step was to remove the old tiles which were stuck to the wall pretty good. Then, after removing the drywall as well and cleaning up the area, it was time to put the new glass tiles in place. The whole mosaic came out rally great.{found on themarionhousebook}.

Brick fireplaces can be really lovely but their rustic look doesn’t really match a modern home. In that case, get rid of the brick as shown on Swingncocoa and replace them with tiles for a clean and fresh look. The project is a bit messy and also quite complex so pay attention to the details if you want everything to go smoothly.

Another inspiring fireplace makeover is featured on Thehandmadehome. For this project, the fireplace got new tiles and the original mantel was salvaged and reused. The new look is modern, simple and classy. The mantel was painted white and it goes really well with the hexagonal gray tiles. 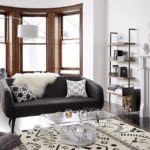