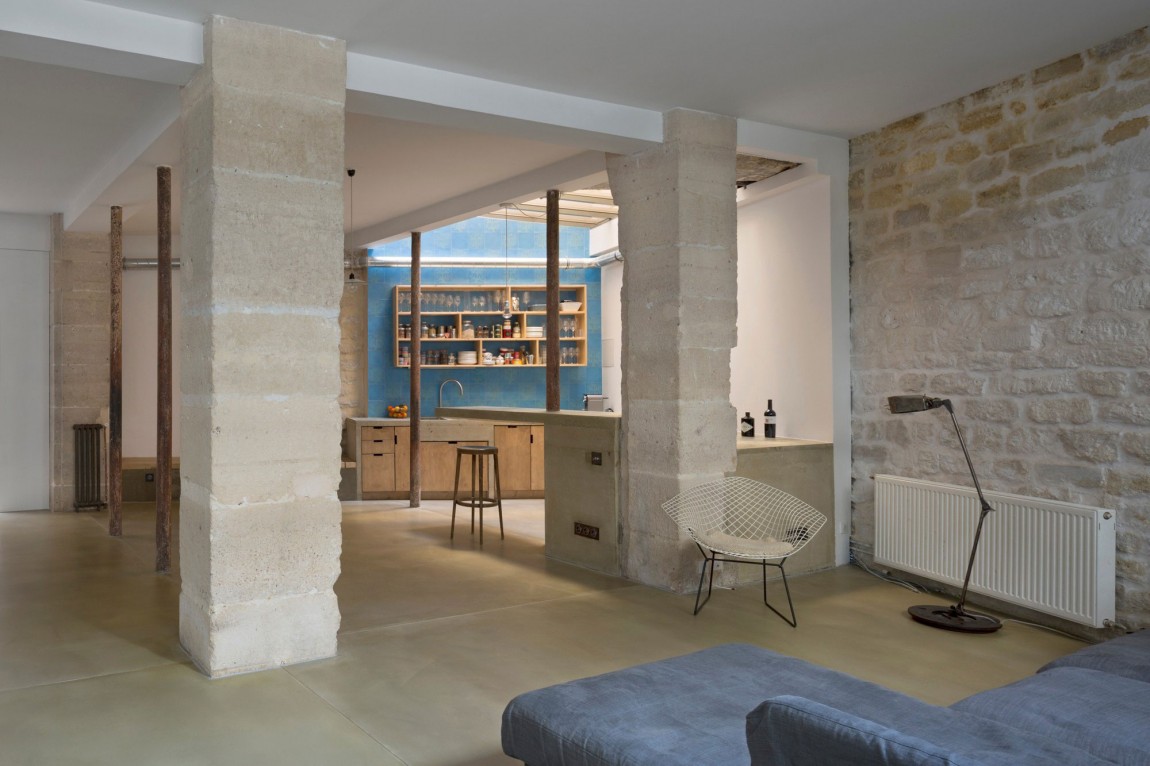 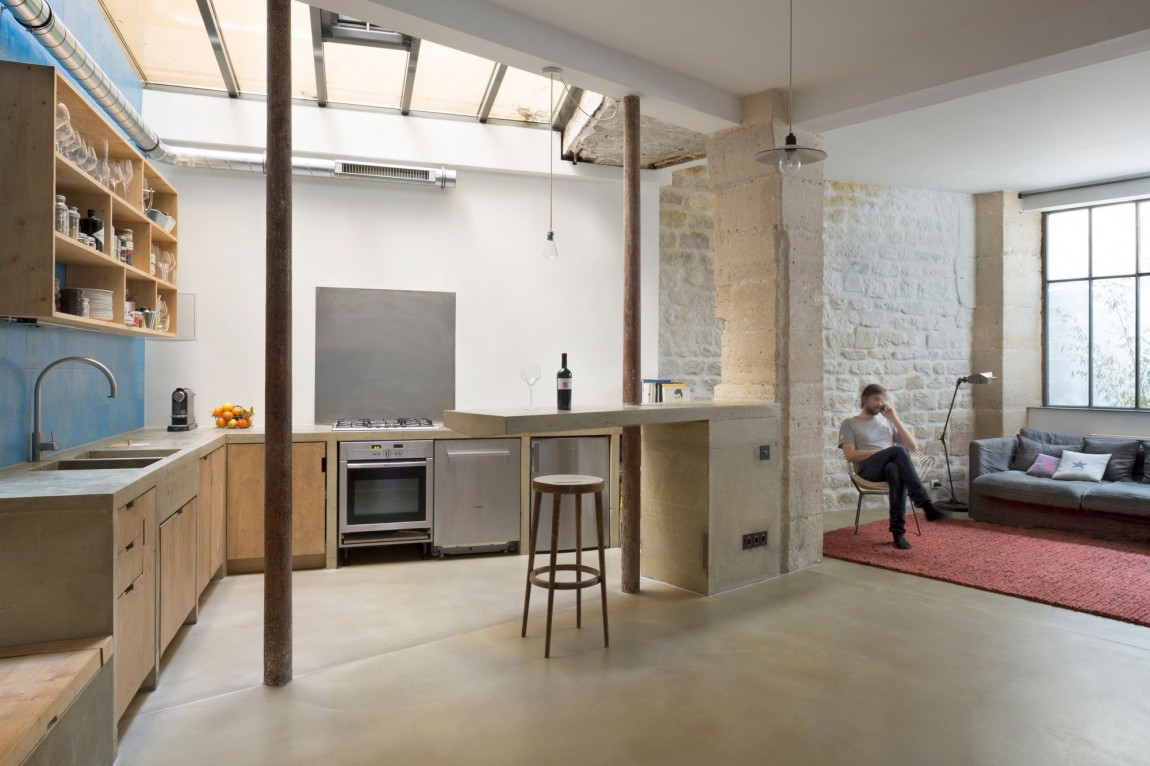 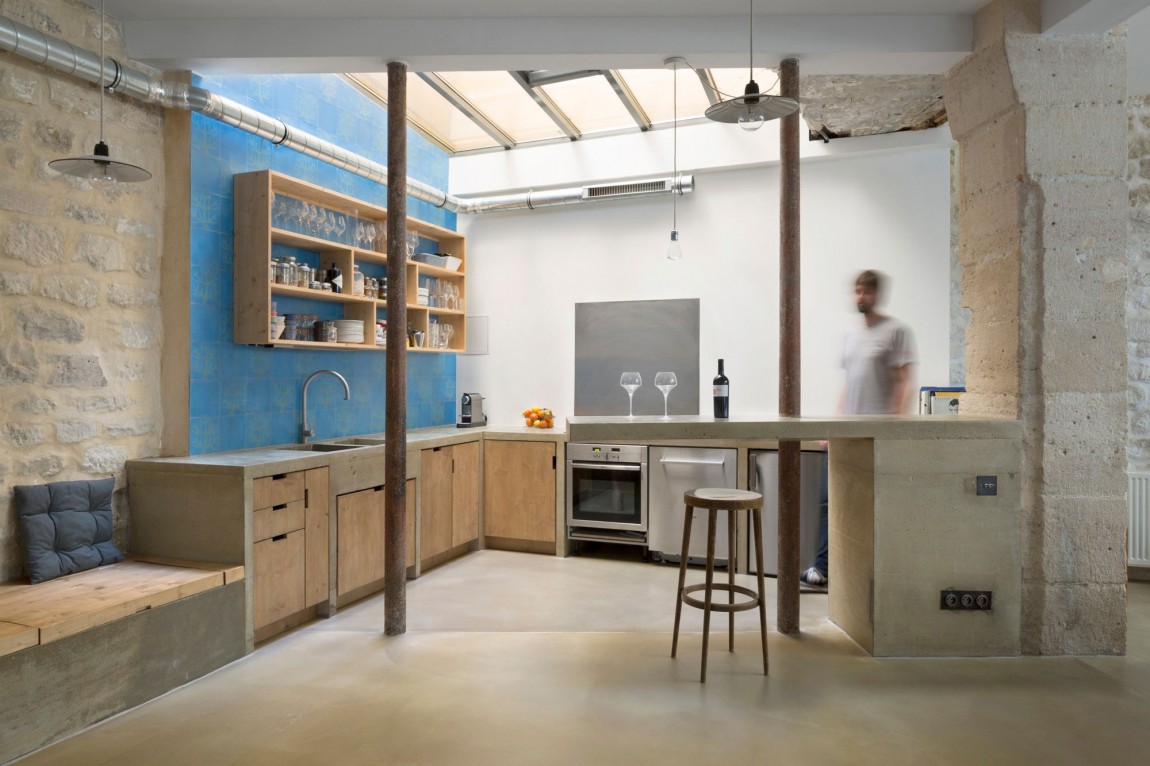 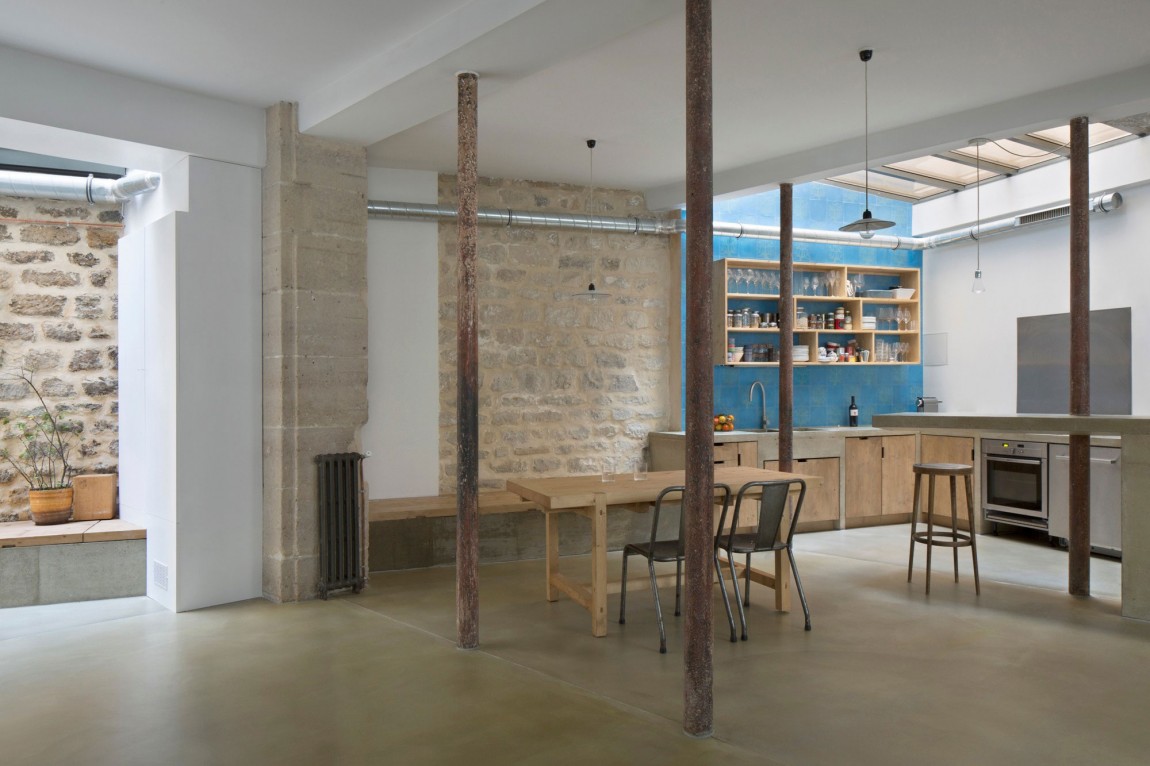 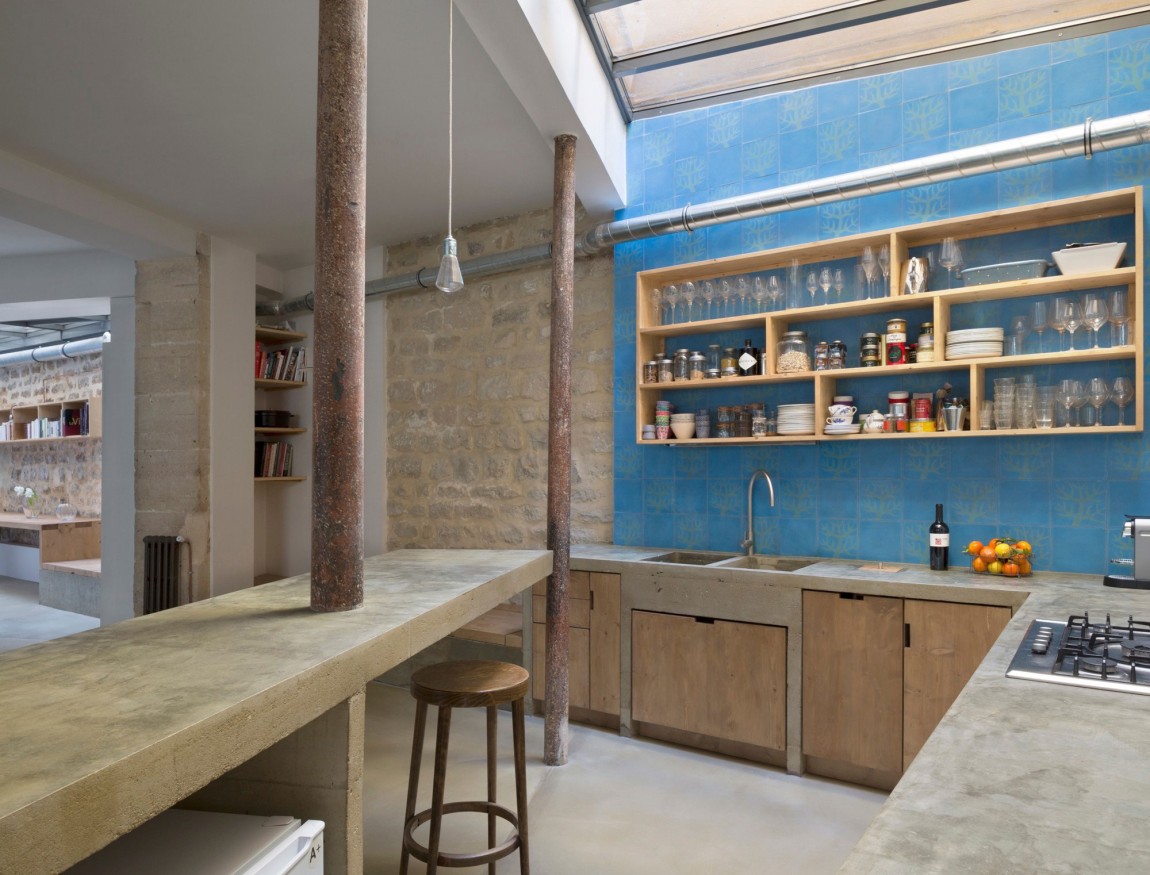 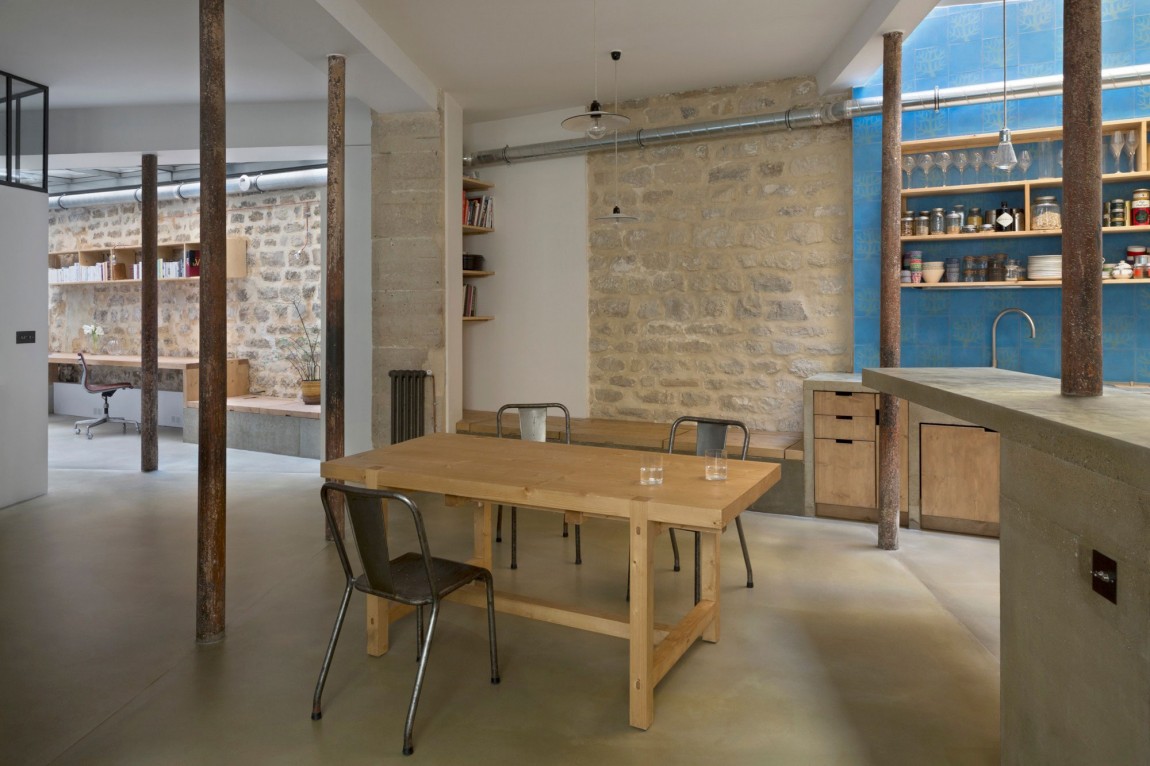 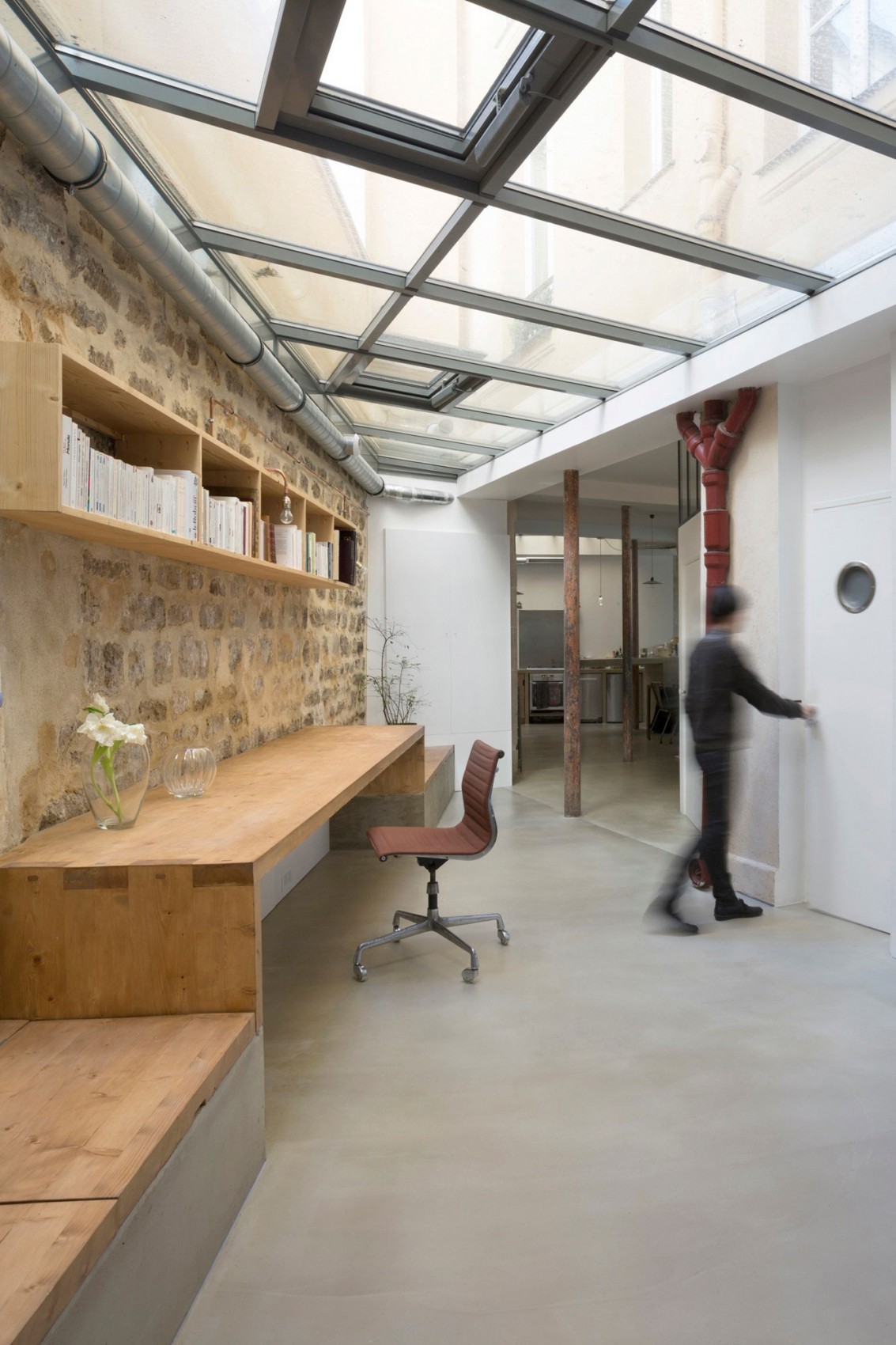 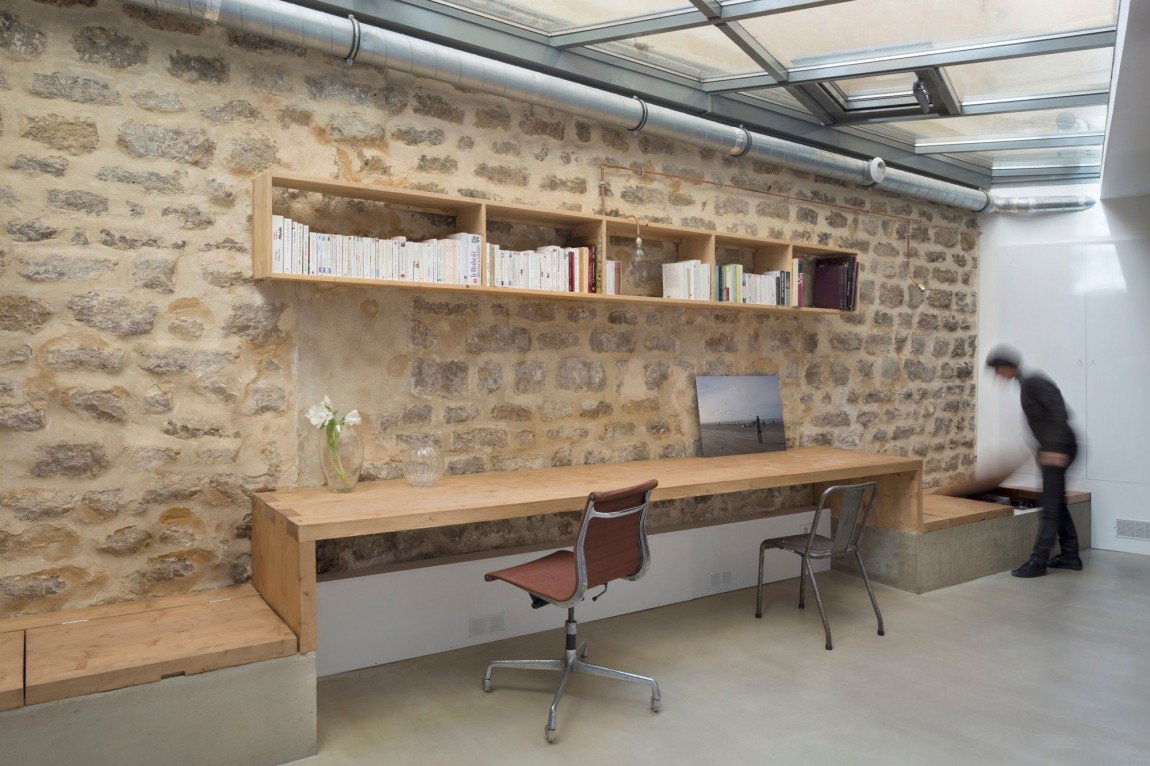 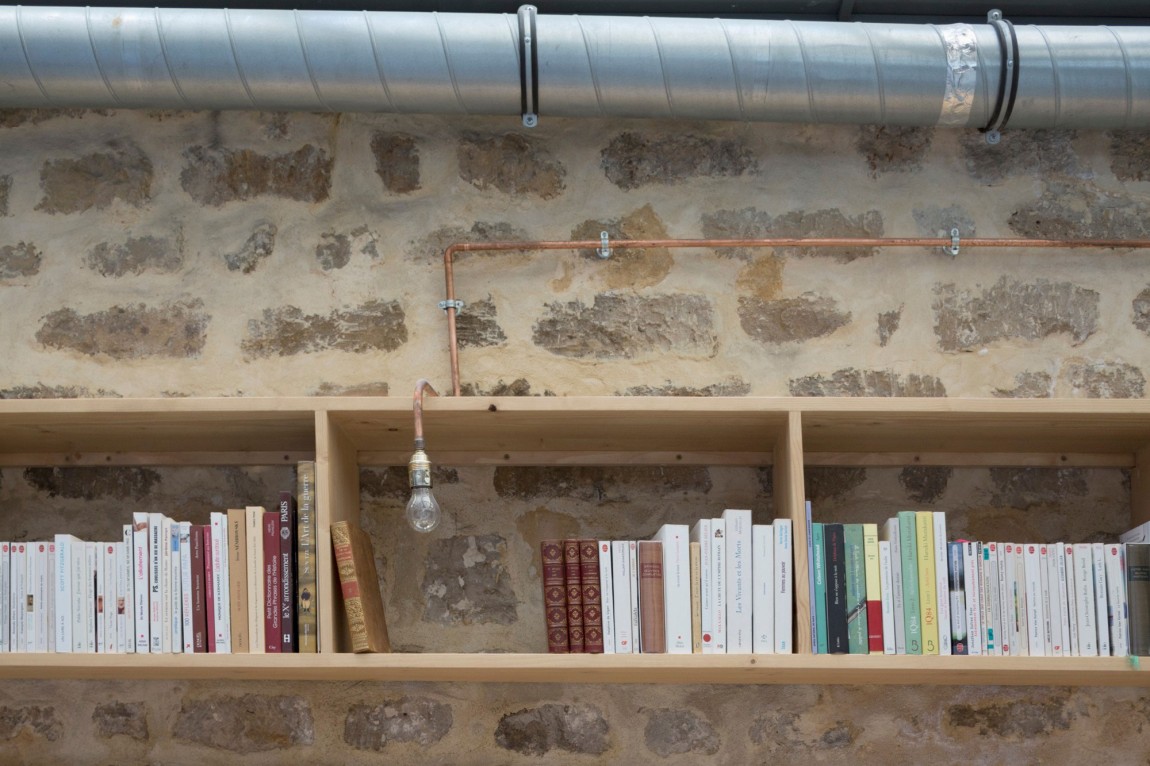 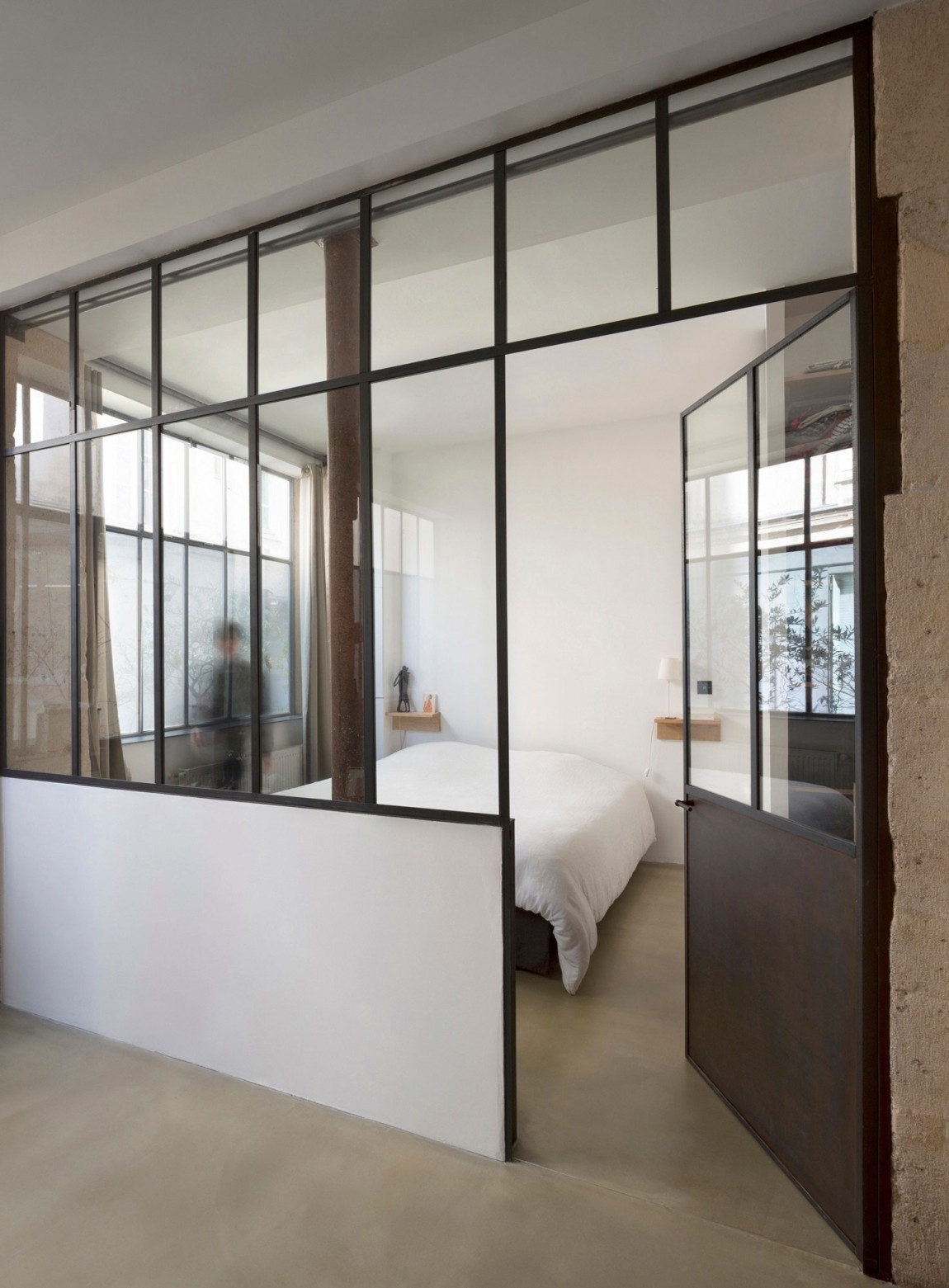 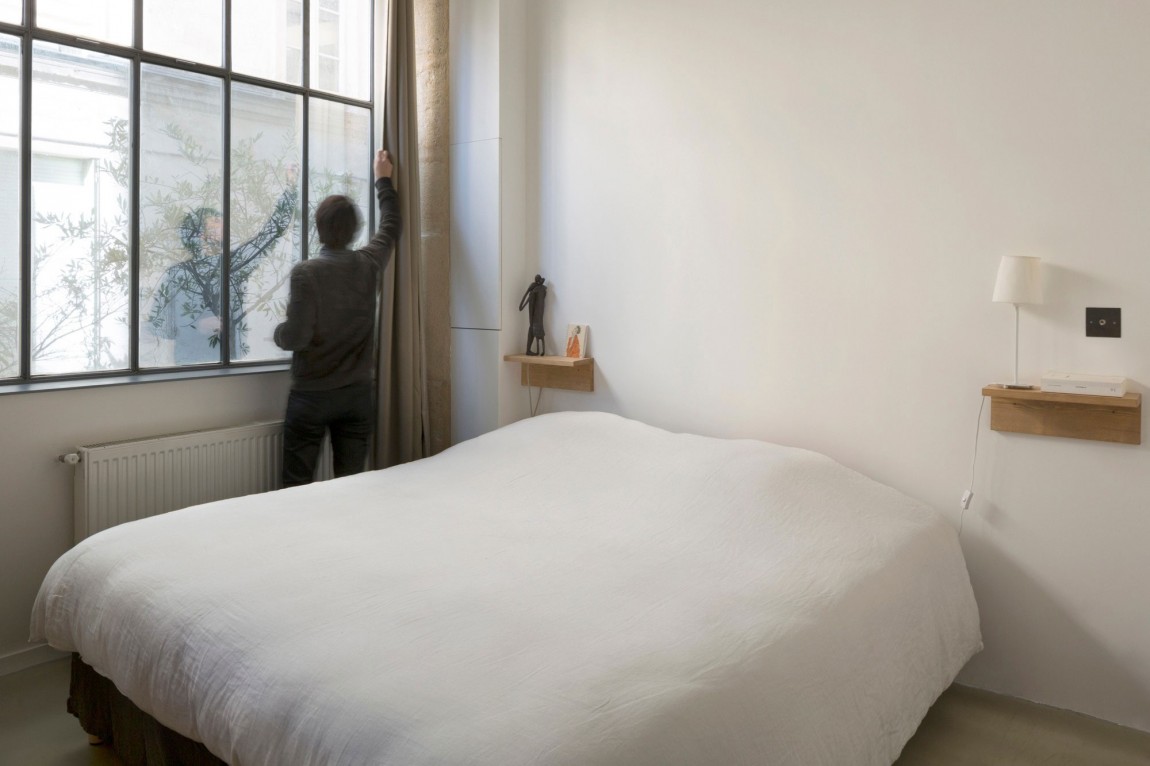 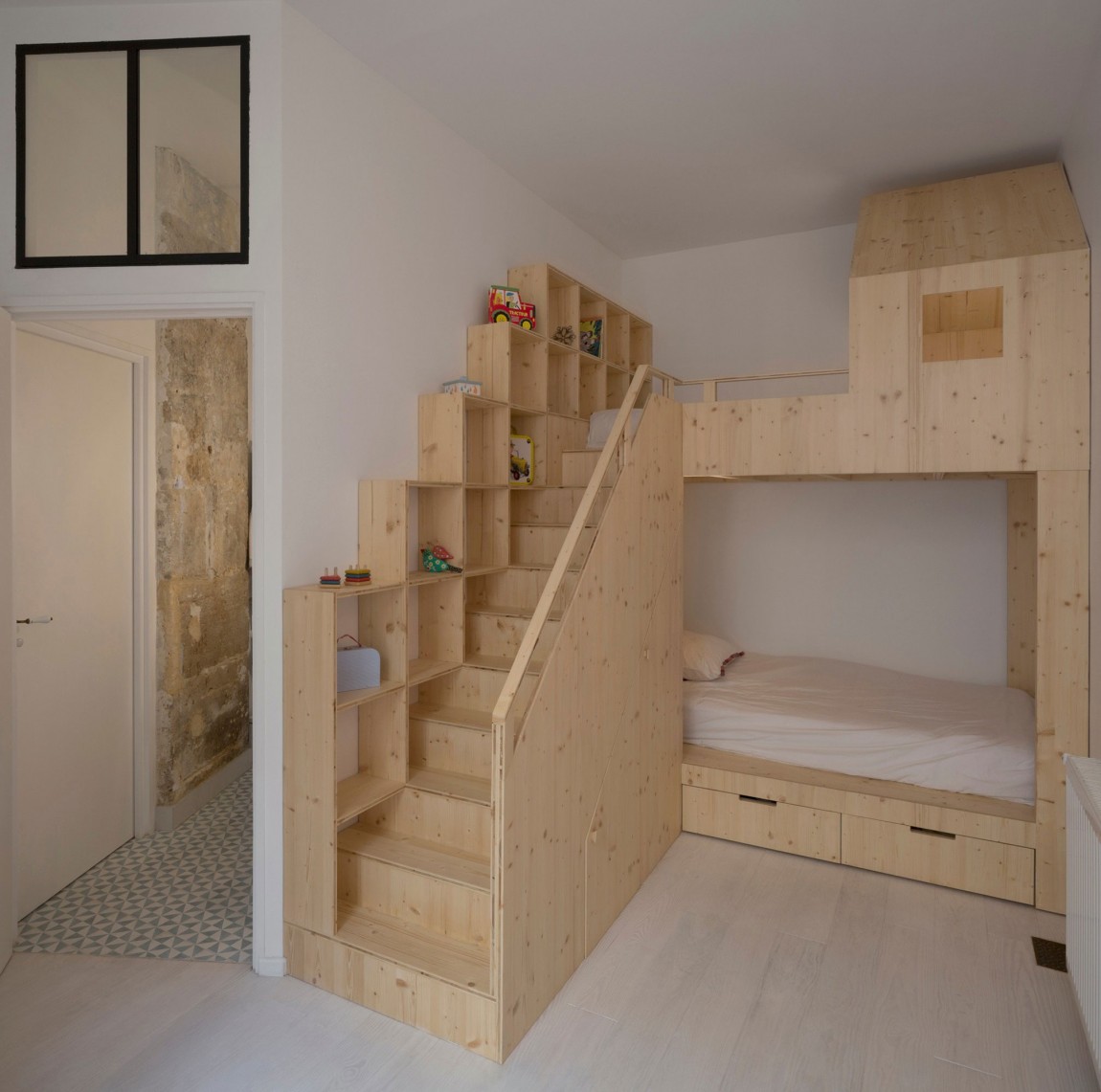 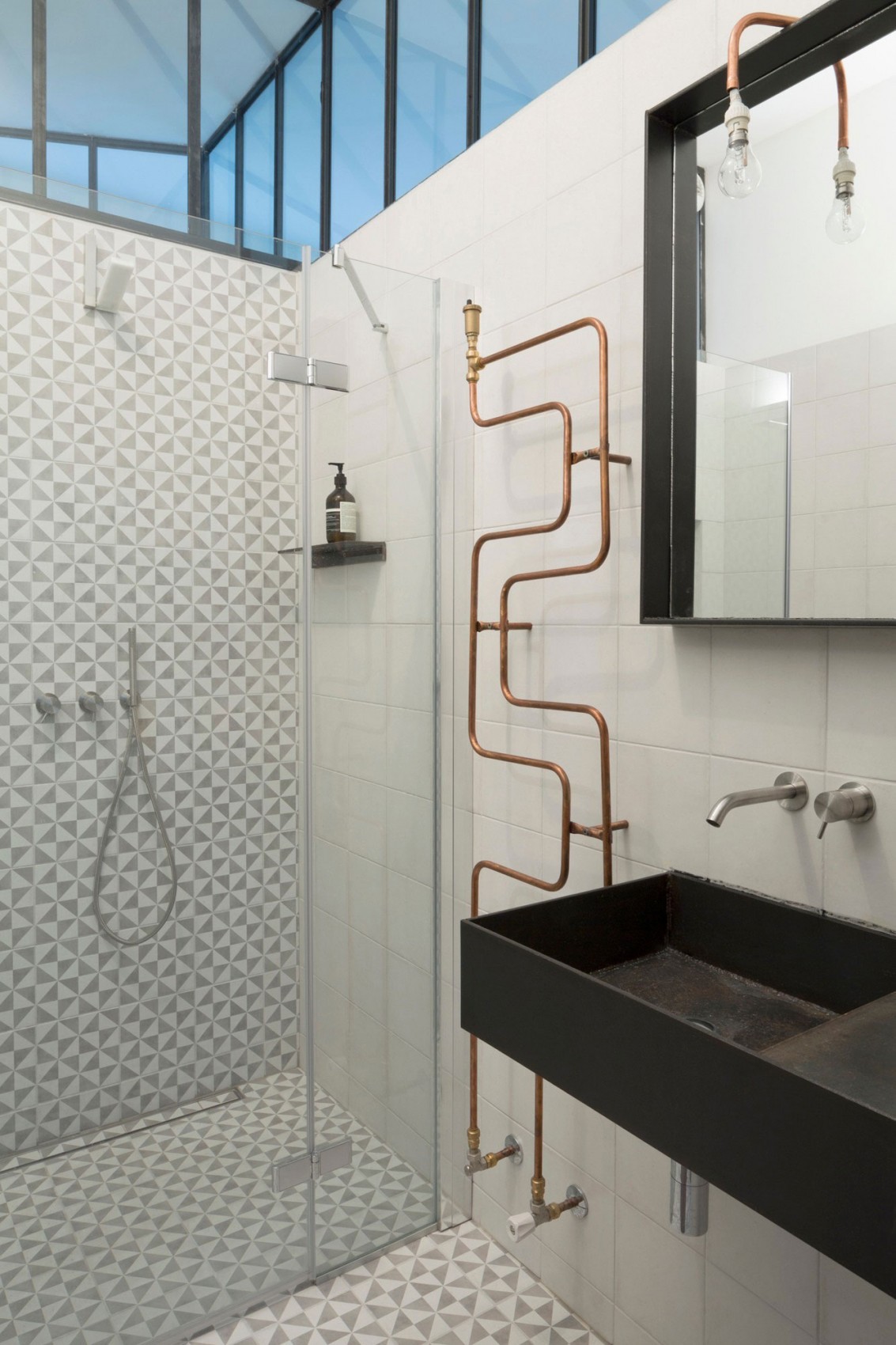 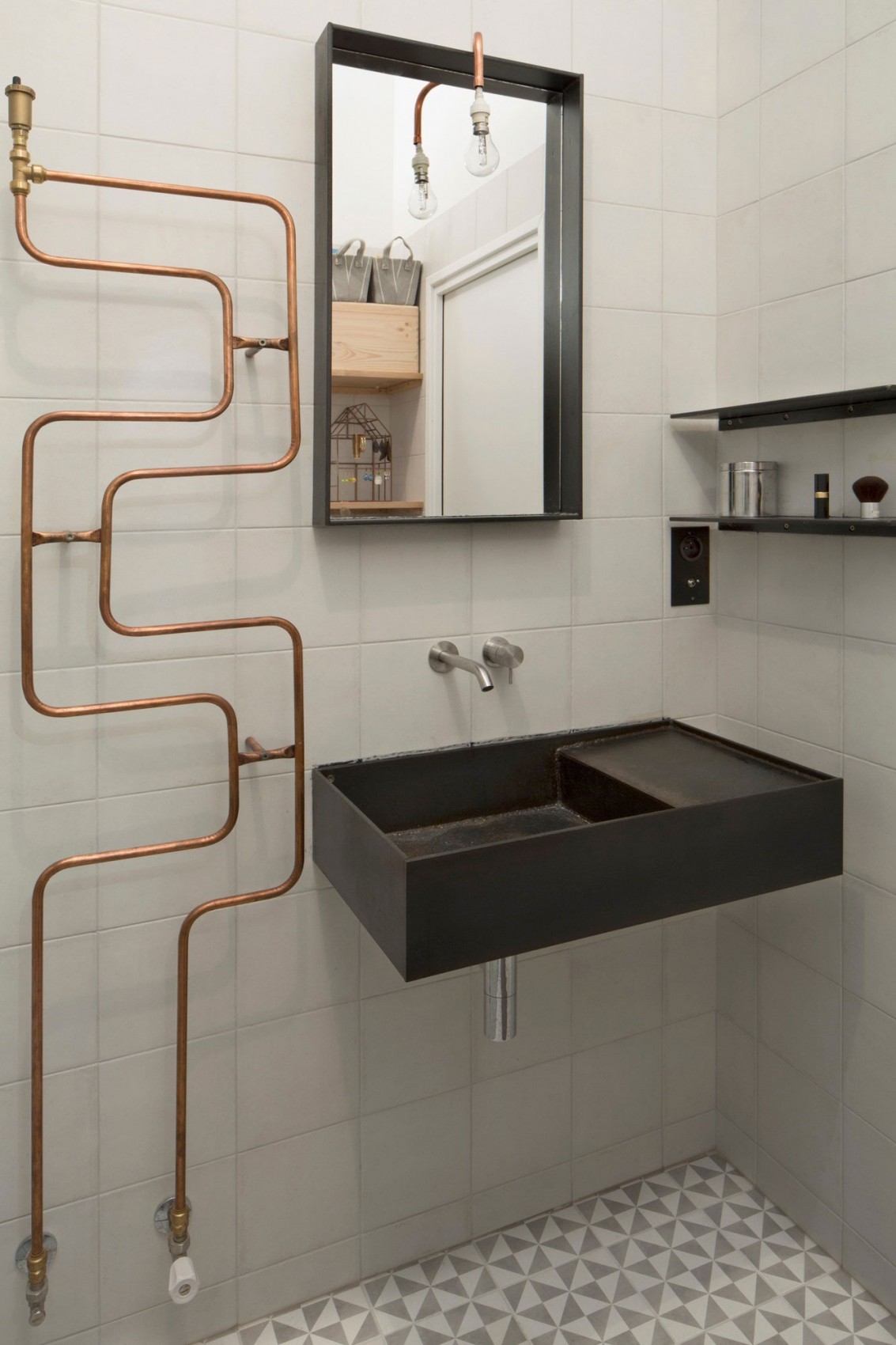 This 130 square meter (1,399 sq ft) home is located in eastern Paris, France. It was designed by Maxime Jansens in 2014 and it has a very peculiar structure. The loft has very few windows and some rooms have no direct openings towards the exterior.

The client’s main requests were to have as few partitions as possible and to utilize transparent walls as much as possible. Both requests aimed at opening up the interior and bringing more light inside.

Two patios were completely covered with skylights and by integrating them into the open floor plan additional natural light enters the spaces. This was a small budget renovation and the architect chose to use raw finishes. As a result, the interior features exposed brick walls and columns.

The living room and kitchen now share the same zone. The walls separating the have been eliminated, revealing only the load-bearing columns. The seating area has several large windows which were left uncovered.

The kitchen, on the other hand, has no windows and, in addition, occupies a corner nook. However, it’s not a dark and gloomy space thanks to the skylights.

Large columns divide the open floor plan in various separate zones. In between the kitchen and the living room is the dining area. It gets its light from the adjacent spaces. The kitchen has a blue accent wall which is a bold touch of color for the entire social area. The furniture is simple and a bit rustic-industrial. The concrete kitchen counter top combined with the floating island offer this space a particularly interesting look.

The island doubles as a bar, serving as a space divider between the kitchen and the dining and living spaces. An interesting design choice was to leave most of the walls exposed. By not covering them with wall-mounted cabinetry, the designer kept the décor bright and airy. The shelving unit mounted on the blue wall allows the color to penetrate through the shelves, playing with contrasts and textures.

The dining area is, in a way, at the center of the loft, occupying a transitional space between all the adjacent zones.

The second skylight-covered space was transformed into a home office. It has a desk supported by two concrete and wood benches. It’s facing a textured, raw wall. All the storage in here comes in the form of a long wall-mounted unit divided into five cubbies for files and office supplies.

The two kids’ bedrooms feature glass walls meant to let light pass through into the rooms. They’re both very simple, with minimalist color palettes based on white. The tiny wall-mounted nightstands and the absence of a headboard give the room an exposed, unfinished look.

One of the bedrooms features a pair of really cool bunk beds. The staircase and shelving combination makes additional furniture unnecessary in the room. In addition, the bottom bed has built-in drawers.

Hidden behind the two bedrooms is the bathroom. It’s a small but quirky space, featuring a copper pipe light fixture above the mirror and a towel warmer with similar characteristics. Once again, the storage is minimal and in the form of open shelves.