It’s almost a crime to call this magnificent space a bathroom. With more flair and detail than some of the nicest living rooms, this master bathroom spa is a garden getaway. Designed by ABH Interiors for the 2019 San Francisco Decorator Showcase, it has endless creature comforts in an expansive room that is the cheeriest space we can imagine.

The entire home is a San Francisco Landmark listed that is listed on the National Register of Historic Places. Originally built in 1904, it was modeled after the Petit Trianon in Versailles. The 18,000-square-foot mansion in the high-end, tree-line Presidio Heights neighborhood was transformed by an army of designers for the Decorator Showcase benefitting the financial aid program of San Francisco University High School.

ABH Interiors, founded by Alexis Humiston, set out to transform the master bathroom into a romantic and nostalgic retreat for Eloise, the beloved granddaughter of Le Petit Trianon’s original owner, Cora Koshland. Koshland was known for the many parties she hosted at the grand home and historical documents indicated that among them was a butterfly-themed débutante ball for her granddaughter. It was noted to have been a very special and sentimental occasion. Because the flowers were such an integral feature of the ball, the family’s butler, who had served them for 35 years and was formally trained in the floral arts, was tasked with the decor.

To honor and pay tribute to the magnificent gardens and the lifestyle of Eloise’s family, ABH Interiors created a floral garden theme for the spa bathroom. The space is entirely clad in a custom, hand-painted de Gournay wallpaper entitled “Paradise Lost” that was launched in collaboration with ABH Interiors. The scenic panels run the gamut from crumbling ruins, overgrown gardens and abandoned boats to wandering peacocks. The aim was to create an environment that resembles a once-mystical landscape that time has forgotten.

Although the walls may recall an era gone by, the rest of the space includes all the creature comforts that anyone could want in a spa retreat. In addition to modern appliance conveniences, the room was fully restored and is accented with pieces from around the world. A separate toilet room is next to the double-size shower, fully tiled in a complementary pale bluish hue. Brass shower fixtures perfectly accent the space. The small table between the shower and toilet is ideal for mementos as well as extra bath shower items.

The grand space has an unexpectedly large sitting area that features a fireplace flanked by two sumptuous velvet chairs by Amy Somerville paired with a coffee table by ATRA. The fireplace itself is tiled in Clé Tile, covered with an Art Deco style screen and accented by pots of plants on either side. Above the fireplace, the wall is highlighted by an antique, gold-framed barometer from C. Mariani Antiques. Grounding the entire setting is a magnificent Persian rug that manages to complement the wallpaper perfectly.

In the corner by the window sits a deep, freestanding Kohler tub and accompanied by two agate side tables from Coup d’Etat. The 100-year old French Oak floors in the bathroom space are the perfect shade for the overall color scheme. The molding at the top and bottom of the walls is painted in different shades of blue that dovetail with the depth of the colors used in the wallpaper. The darker aqua blue grounds the room while a lighter shade is used on the crown molding to meld with the sky in the wall scene. On the ceiling, a pendant fixture from Found By Maja has the color of a pale sun radiating down, which adds to the illusion of being in a garden space.

Instead of a typical toiletry vanity, a marble cocktail bar from the 1970s is put into service with great flair. The vibrant green is a perfect choice and adds yet another luxe piece to this spectacular spa bathroom. Below is an excellent view of the emerald stone slab vanity from Fox Marble that is fitted with two Kohler crystal vessel sinks. On the wall, lovely oval mirrors from Collected by Jason Koharik are framed in a complementary aqua.

Even the toilet room is adorned with stylish accessories such as the vintage boat prints and bust planter.

In its entirety, this conception of a spa bathroom is a wonderful homage to the original owners and the history of the house. More than that, it’s a retreat that you’d never want to leave, which is not something most of us would say about our bathrooms! 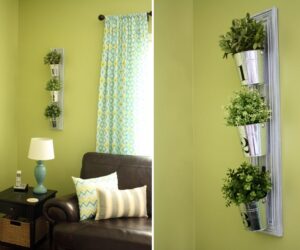 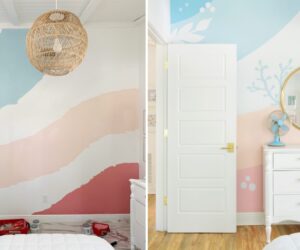 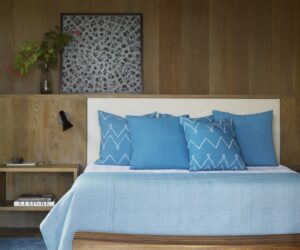 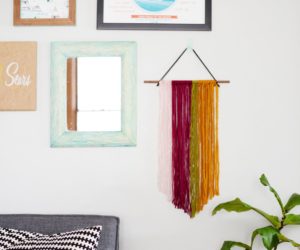 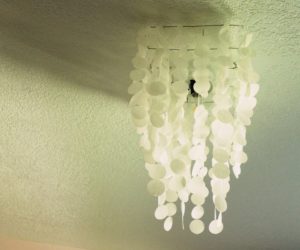 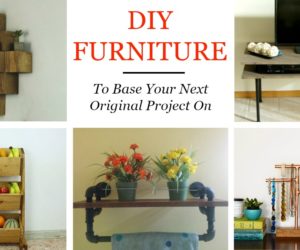