Climbing cliffs, mountains or walls is a wonderful passion. It relieves stress and it’s also fun, not to mention that it pus your body in great shapes. It’s also an exercise with benefic effects on your everyday life. So if climbing is your passion then you must have a climbing wall in your home. You wouldn’t be the first one. Here are a few examples of homes that they too have climbing walls incorporated in their interior design.

This is a house that really brings the outdoors in. It’s a small two-story structure located in Tokyo, Japan and it reflects its young owners’ character and activity-driven lifestyle. This particular area is topped off by a rock-climbing cove.

It’s organized vertically and the whole room is filled with natural light. The wall leads up to a tapering form that hovers over this communal area. It’s a playful detail and a perfect way of personalizing the house.

This home used to be a warehouse until it got transformed. It’s now the home of a couple that enjoys rock-climbing and thus they requested for the interior design to reflect this idea. The two-story structure has a sloping wooden wall on the first floor with treads for climbing practice. And this is not the only feature that reflects the couple’s passion. The double-height living area also features a shortcut to the master bedroom that can be accessed via a ladder. The house can be found in Osaka, Japan.

This is the “3 way house”, a two-story residence from Tokyo, Japan. In the center of the house there is a sort of slim courtyard that features a rock-climbing wall. It leads to the roof terrace and it also brings in lots of natural sunlight. For those less audacious, there is also a second alternative: a series of ladders. By using these unconventional features, the use of staircases became unnecessary. It’s a fun, modern and space-saving solution.

And here are some more rooms that also feature a rock-climbing wall.

This one has both an indoor climbing wall and a ladder. This way you can choose either solution to get into the next room. Of course, the door would also be useful if it weren’t so boring.

This boy’s room also has a climbing wall. It’s a great feature, especially for this room because it presents him with something fun and rewarding to do in rainy days. It’s also a great source of entertainment for all the visiting friends.

And since we were talking about it, here’s a kids’ playroom that also has a climbing wall. It even has a slide. It’s like an indoor park just for your kids. They have plenty of activities that they can do and they also get to exercise. 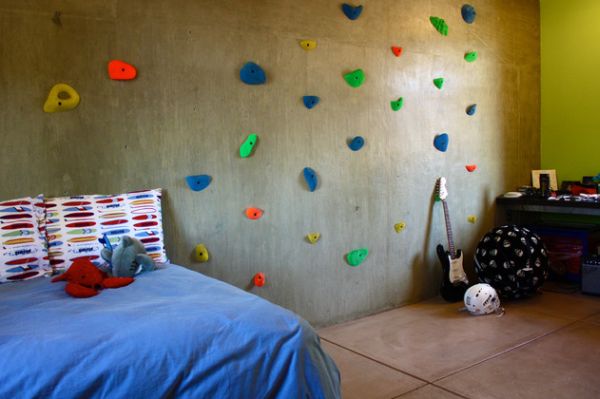 This is another example of a bedroom featuring a climbing wall. It’s another way of having an accent wall, this time using other means than simple color. It’s a more modern and fun alternative, especially for kids.