When you finally decide to buy a house it’s not always as easy as you see it in the movies. Sometimes you can’t even find a house either because there are no options to match your requirements or because of the price. In such cases an option would be to buy an old house and renovate it or to start building from scratch. This mid-century modern house used to look horrible when Donald Billinkoff, a New York architect found it.

The façade was very ugly indeed. It featured white-brick veneer and stucco and it had small windows. The interior structure of the house was not that great either. It had four bedroom lined up like in a motel and a narrow corridor with fluorescent light. It seemed like a very cheap-looking place. Still, it was all salvageable. There were also some nice features such as the fireplace and the views. It was hard to tell if the views were indeed that beautiful when the house looked so bad. 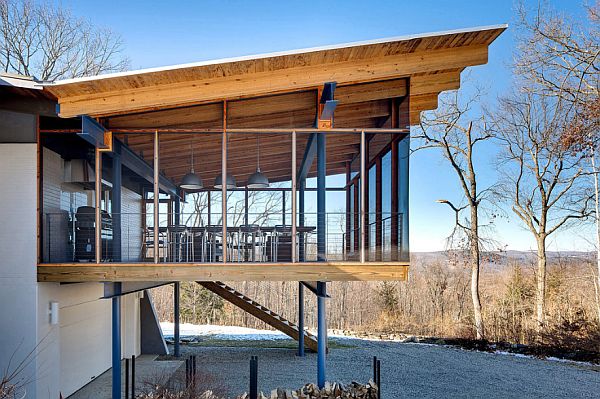 Mr. Billinkoff who runs Billinkoff Architecture in Manhattan decided to change that. It was a challenging project but everything turned out wonderful. The architect bought the place for $400,000. He invested another $400,000 in the renovation. Many major changes had to be made. Walls were blown out, the windows were replaced with floor-to-ceiling structures and the fireplace was wrapped in concrete blocks for a fresh look. The outdoor area also needed some restructuring. The front yard was landscaped and the trees from the backyard had to be cleared.

The extensive renovation was quite a challenge. It might have been easier to just knock down the house and to start over. Still, Mr. Billinkoff wanted to keep it. It was a really well built house and he also liked the challenge it presented. He enjoys rescuing old and decaying structures and likes to see them transform. The renovation started in October 2010 and after seven months the house looked like a completely different place. The interior is much brighter and airy. It’s also a modern home now with a more functional internal structure. Overall, it was a very rewarding and impressive transformation.{found on nytimes}.