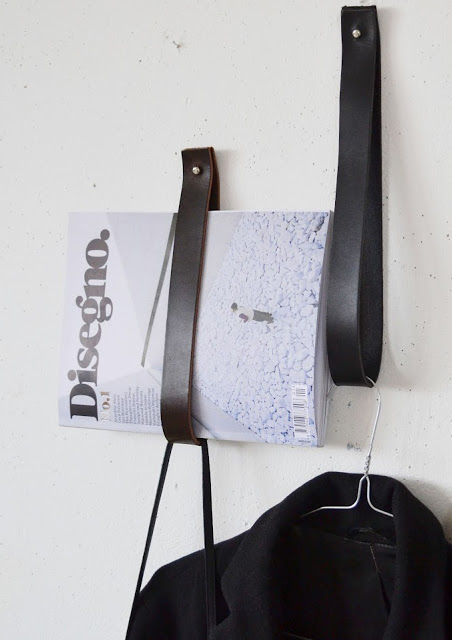 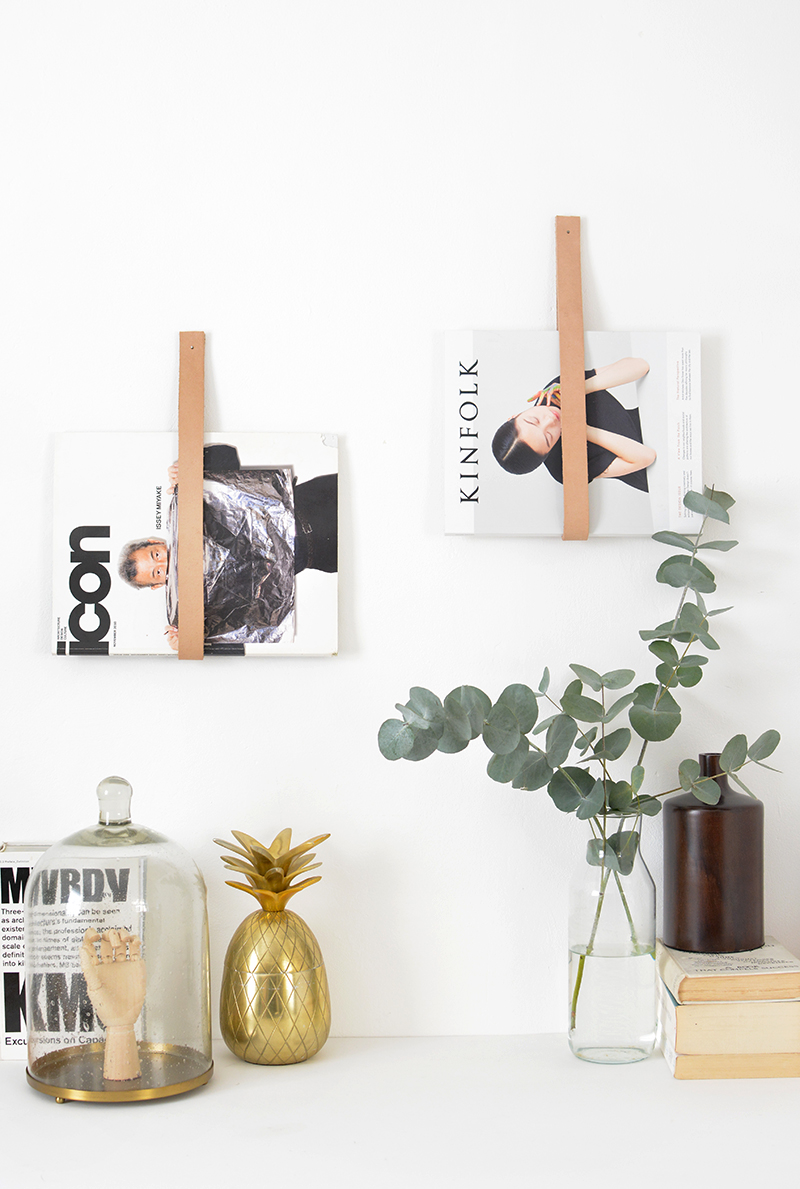 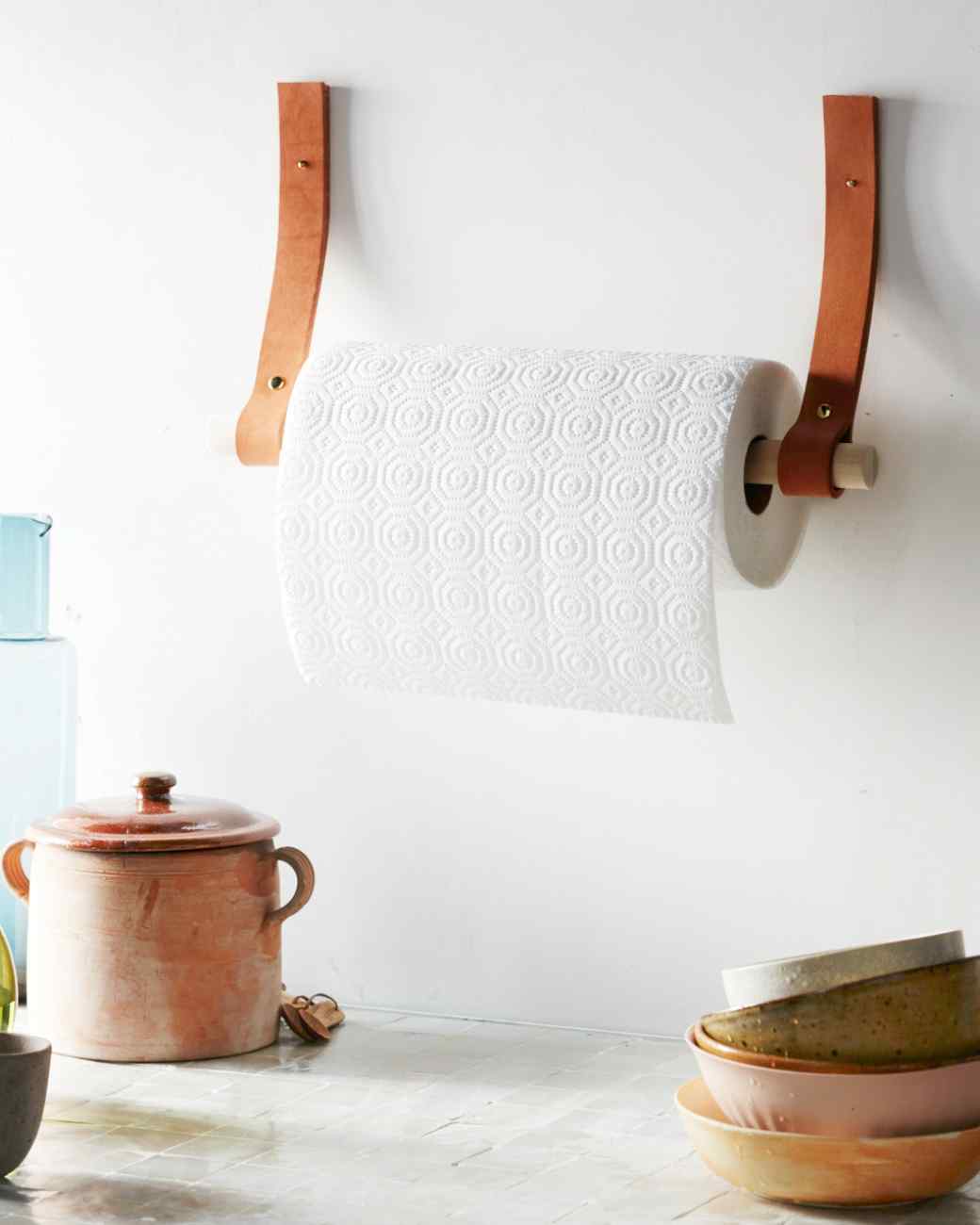 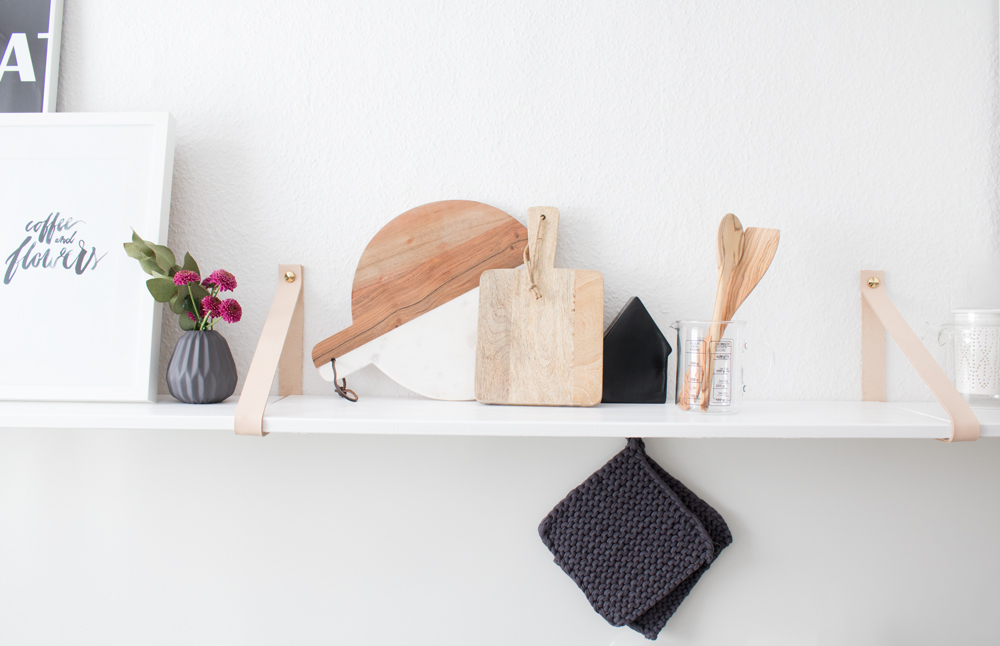 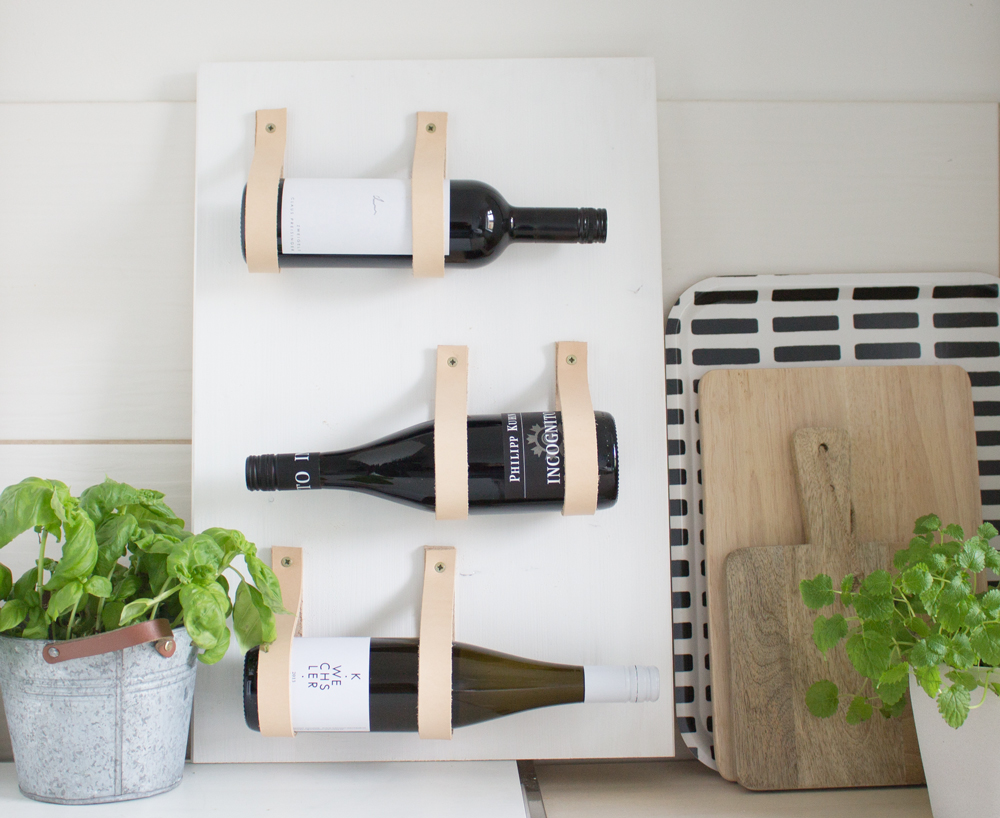 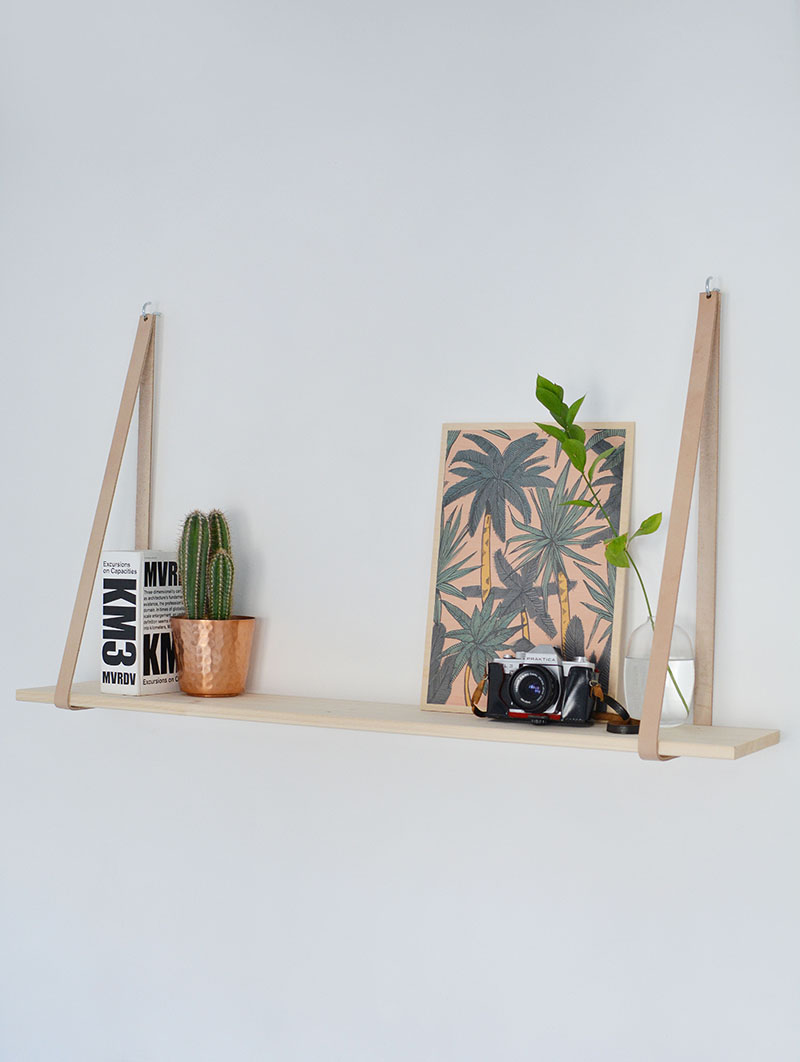 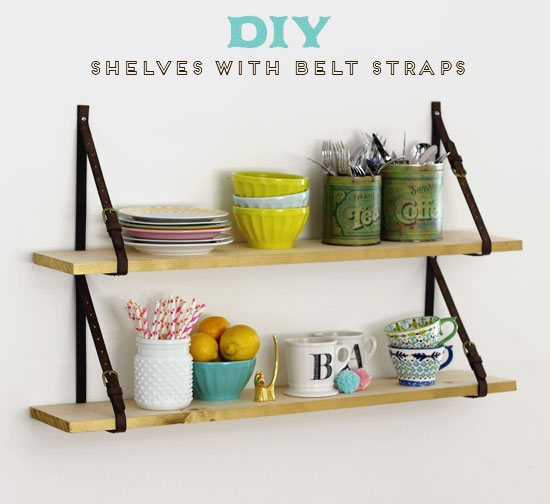 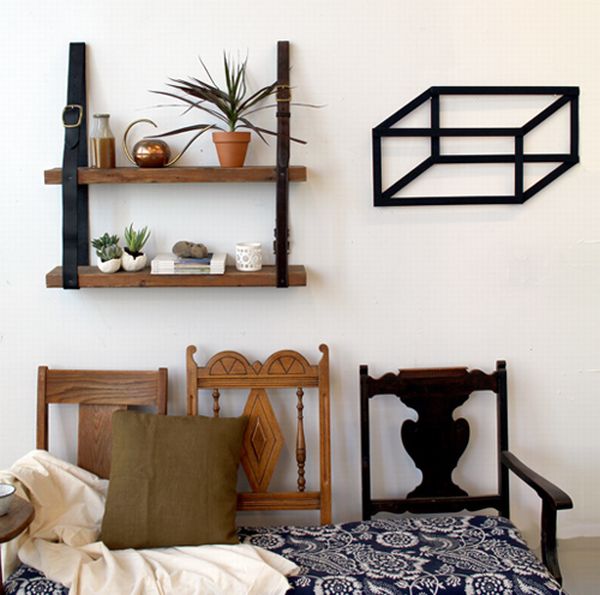 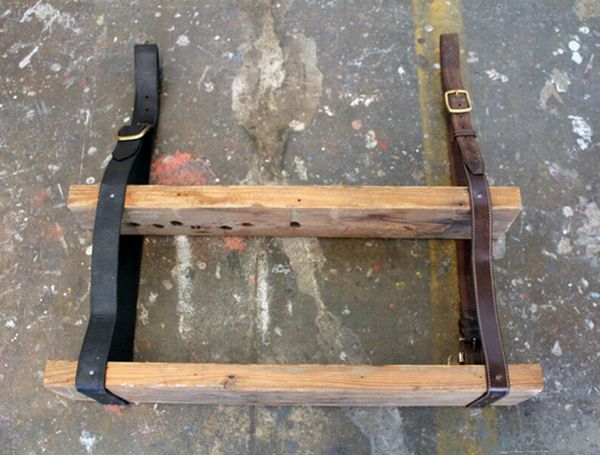 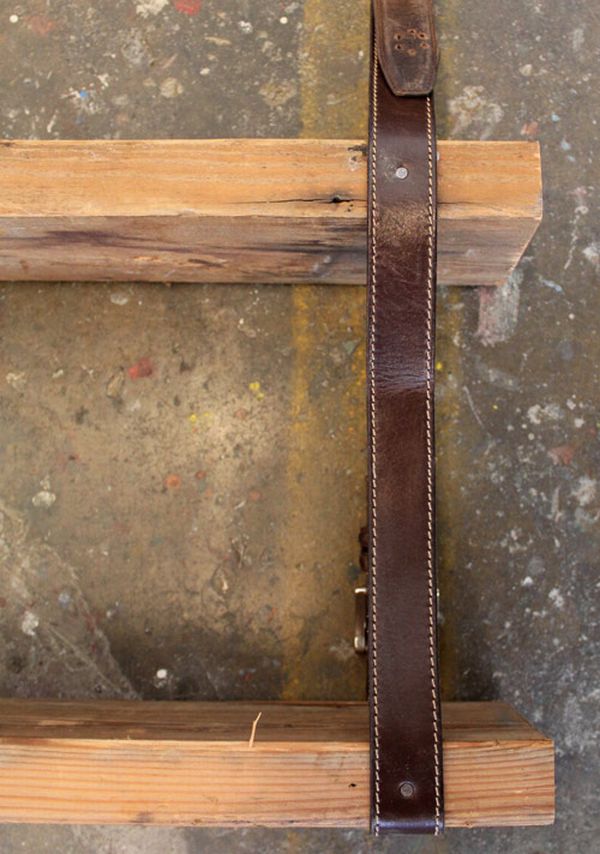 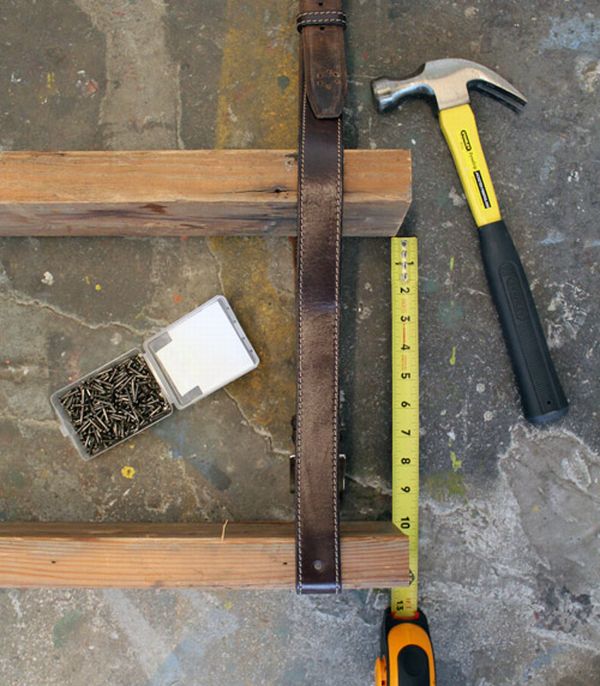 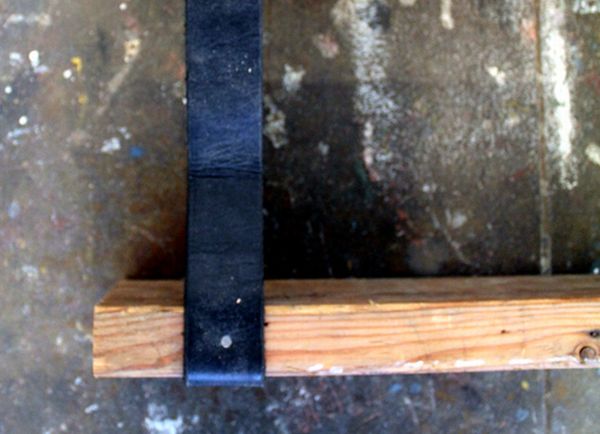 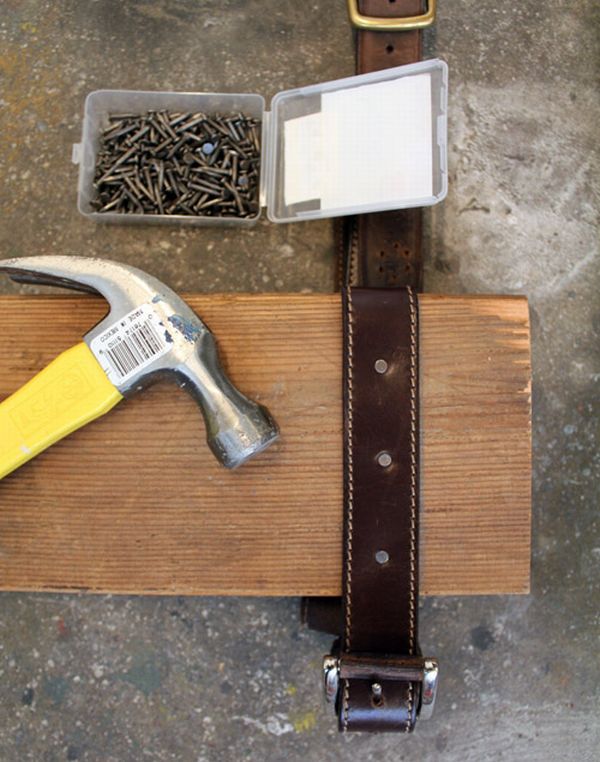 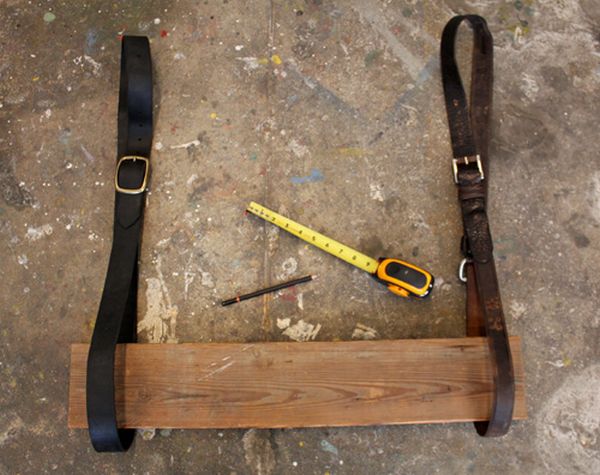 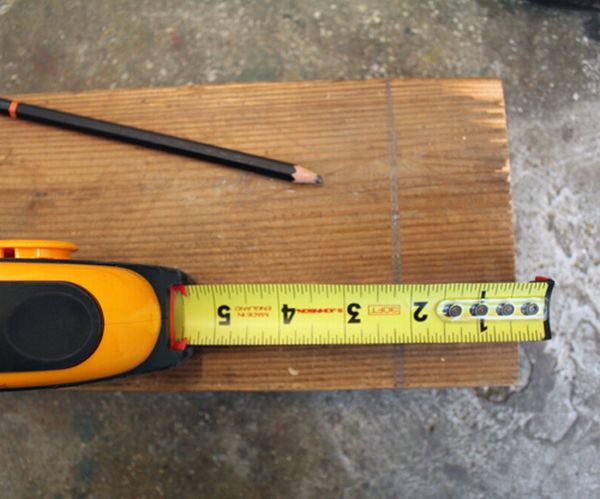 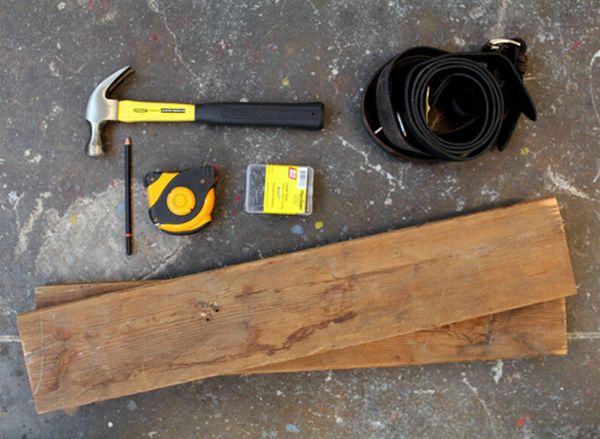 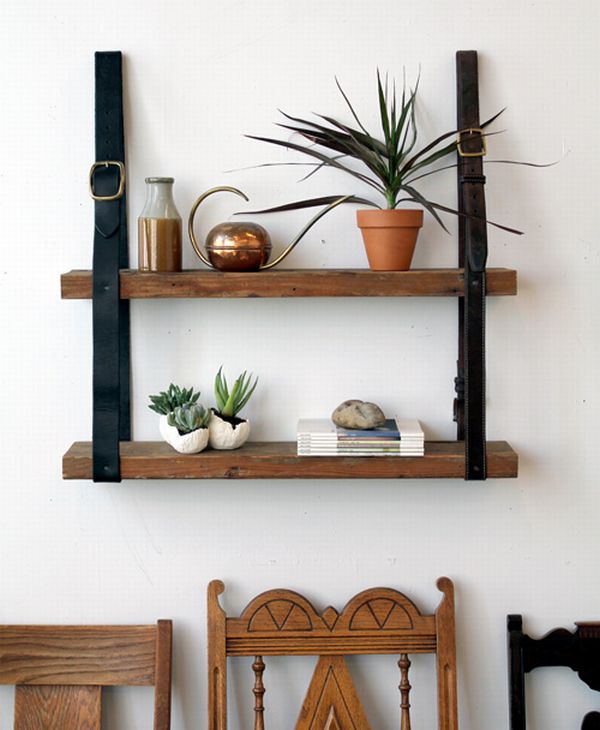 Over the years we occasionally looked at furniture pieces and all sorts of stylish accessories that used leather straps in their designs. This whole idea is definitely interesting and worth exploring further so today we decided we’d analyze a few simple DIY projects that incorporate such elements. Given the nature of this material, it’s easy to replace leather straps with sections from an old belt and that makes the projects even more accessible and easy to do.

First off, let’s take a look at a pair of cute wall shelves kept together by two leather belts. If you want to build this at home you’ll need two wood boards, two leather belts, carpet tacks or nails and a hammer. Mark the boards for easier alignment. Then strap the belts together to make two identical loops. You may need to make extra holes in order to get them to have the same dimensions. Position the loops on the marks and hammer three nails into each belt. Then hammer a nail into the front of each board. Position the second board and secure it to the belts with nails on each side. You’ll find a description of the project on designsponge.

A similar design for shelves with belt straps is described on athomeinlove. In this case, each of the two shelves has its own separate belt straps so you’ll need a total of four belts for this project. You can paint the edges of the wood boards if you want or you can stain the entire shelf. Cut the belts so they all have the same length and make four loops. Attach the two sets of belts to the wall using anchors and then just slide the boards through and adjust them to be level.

If you all you want is a single shelf, you can do that too. Check out burkatron for instructions. You can either use two leather belts or, if you don’t want visible buckles, two leather straps with no holes in them. Make two loops and attach them to the wall. Then slide the shelf inside and level it. You’ll need a leather hole punch and two large screw hooks if you want to get the same look.

Of course, you can also use belts and leather straps in lots of other ways. For example, you could make a custom wine rack. All you’d need is a wood board, some paint, leather straps and nails. Paint the board and then mark on it where you want the straps to be attached. Nail them in place and make sure they’re big enough for the bottles to fit through. You can find out more about the project on itsprettynice.

Here you’ll also find a tutorial for making a stylish display shelf for the kitchen or any other space. It’s all pretty simple actually and not very different from the shelves we described earlier. The difference here is that the shelf is long and needs more than two straps to stay level and to be functional. You can add such a shelf to the kitchen and use it for spices and utensils.

In the kitchen, another useful thing would be a leather paper towel holder. To make one you’ll need an awl or rotary punch, two leather straps, a dowel, a rivet and setter, a drill, screws, a hammer, nails and a wall anchor. Make five small holes in the each strap and loop them to align the holes. Position them on the wall and hammer them in place. Add the dowel and rivets and then your paper towel roll. The idea comes from marthastewart.

Another interesting idea is offered on burkatron. Here you’ll find out how to make leather magazine holders. Actually, all you need to do is take a leather strap, fold it n half to make a loop and then secure the ends together to the wall with a nail. You can make as many of these as you want and place them anywhere you want. You could use one of the walls in the living room, the hallway, bathroom or just about any other room.

To make these leather magazine holders even more practical, you could also use them as hangers for jackets and bags. In fact, they could serve a double function or could be designed to only serve as hangers. They’re a stylish and chic alternative to the regular models and pretty great for holding scarves. {found on ulrikha}.