Many houses have a rich history behind and very interesting stories to tell. However, some of those stories are more intriguing than others. For this New York cottage, it all started with a schooner. The house belongs to Chris Mead and Zoe Hoare. They are both antique dealers and they opted for a more unusual approach when they chose their home. They opted for a salvaged schooner that was turned into a wonderful home.

The house is indeed unique. It was originally built in 1748 so there’s a lot of history behind. Its age is visible in some of the details such as the slightly curved timbers. The house is very old and the fact that it was built from a ship makes it unconventional. It’s the perfect environment for its current owners. They made some changes such as removing the plaster between some rafters in order to let the light get through and they restored the whole structure but the essence of the house and its original charm have been preserved.

The living room is very charming. It features a sea-themed tableau that reflects the house’s origin. As for the furniture, there are some very beautiful antique French chairs and a reproduction washing table that is used as a display piece for some lovely decorations. On the first floor, part of the ceiling was knocked down thus creating a large space. It has white walls, comfortable sofas and a 19th century Chinese coffee table that brings everything together. 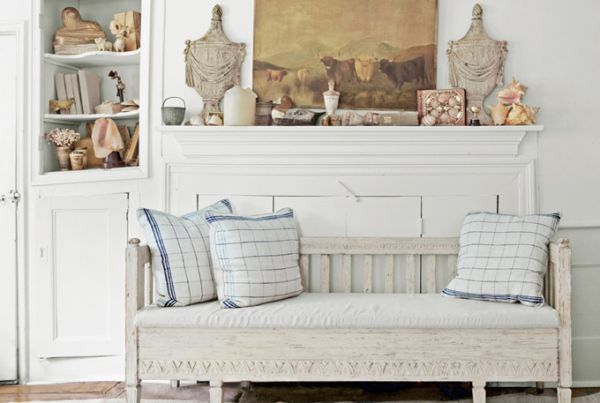 The kitchen is very clean and simple. All the unnecessary elements were removed from the design, leaving only the essential pieces. A simple shelf holds all sorts of containers and jars and allows the kitchen to be an organized and inviting space. 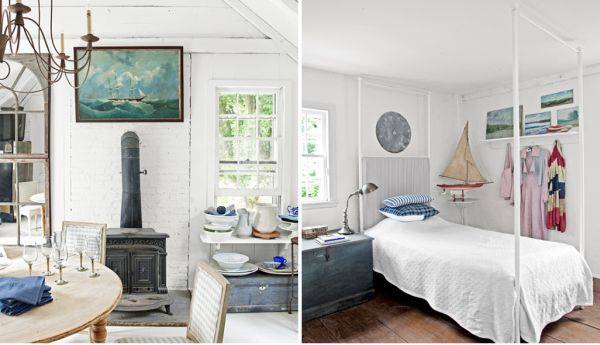 The master bedroom also reflects the owners’ love for antique pieces. Here, a 1940s Gustavian bench is the main element of the reading nook. This space is completed with a pastoral landscape from the 19th century and a wooden reproduction urn relief.

Everywhere you look there’s something simple complemented by a beautiful antique piece. There are also many elements that reflect the house’s history and origin and there’s a very nice and subtle touch of modern that brings this house into the 21st century while still allowing it to keep its charm.{found on countryliving}.