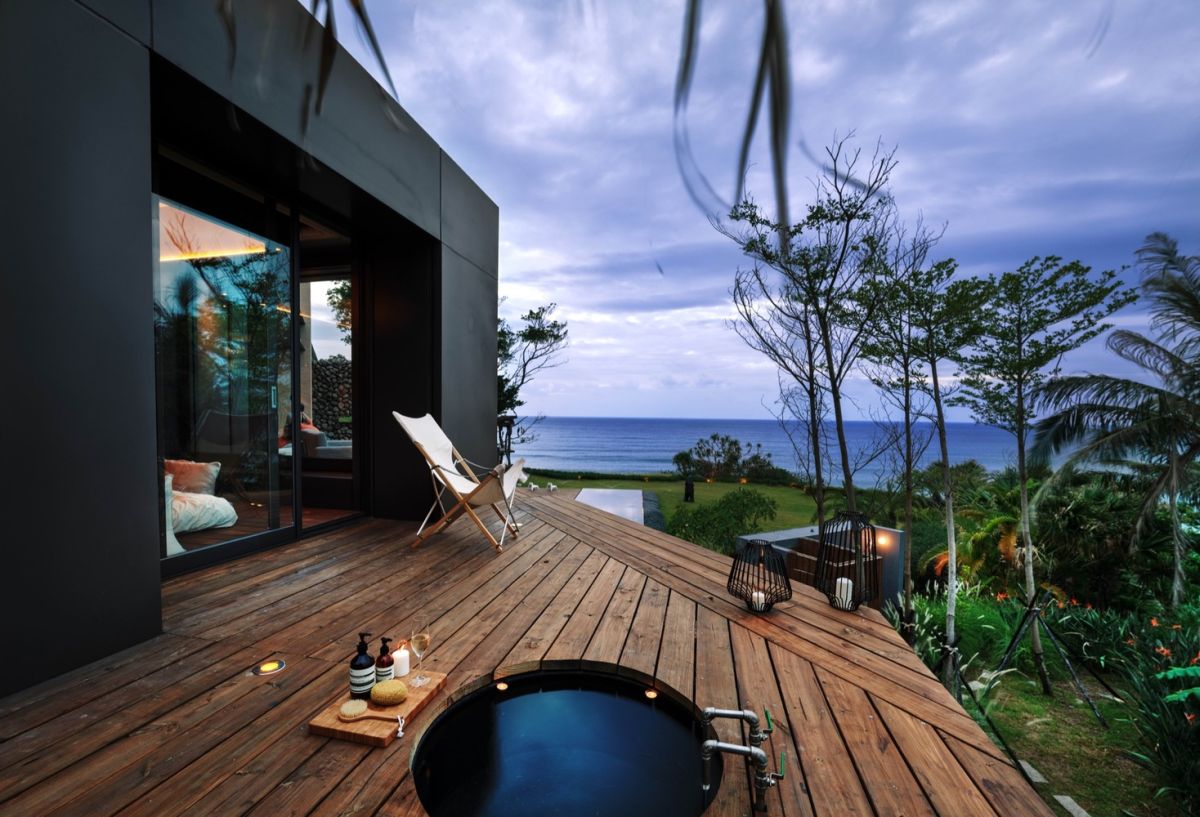 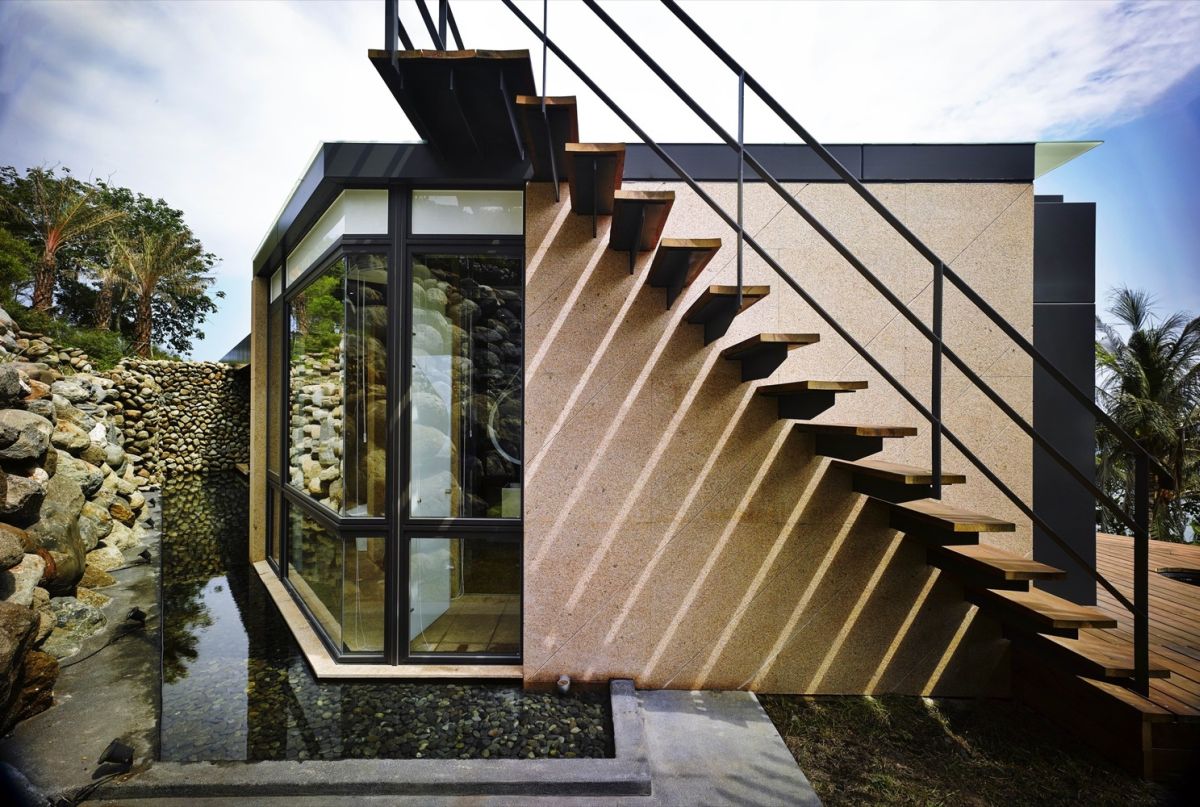 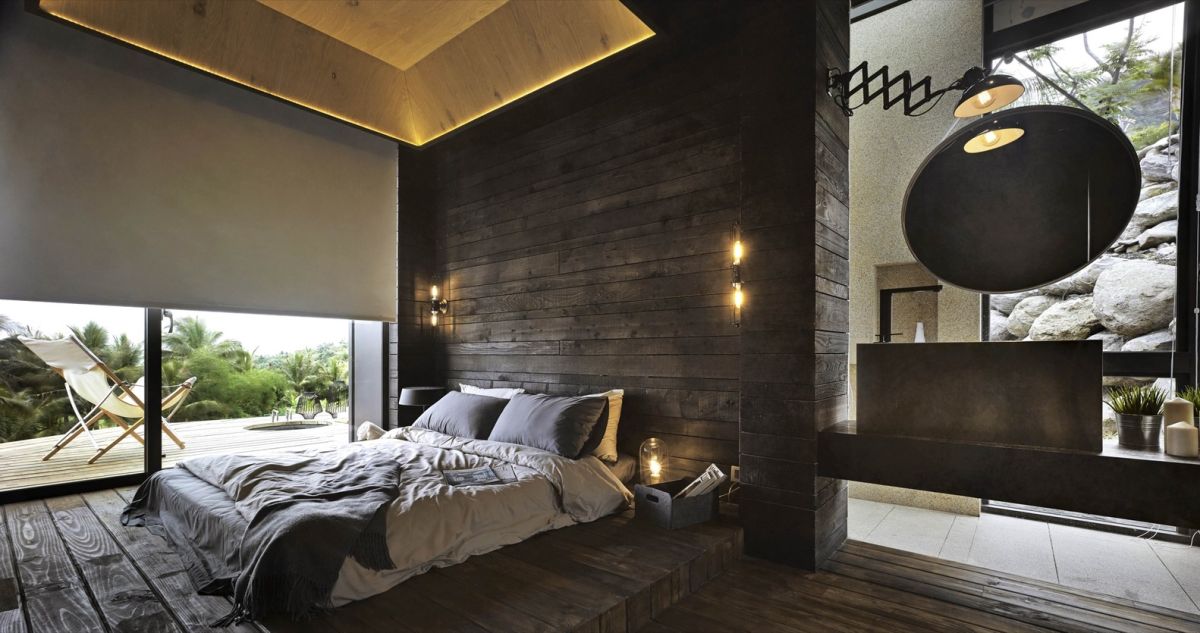 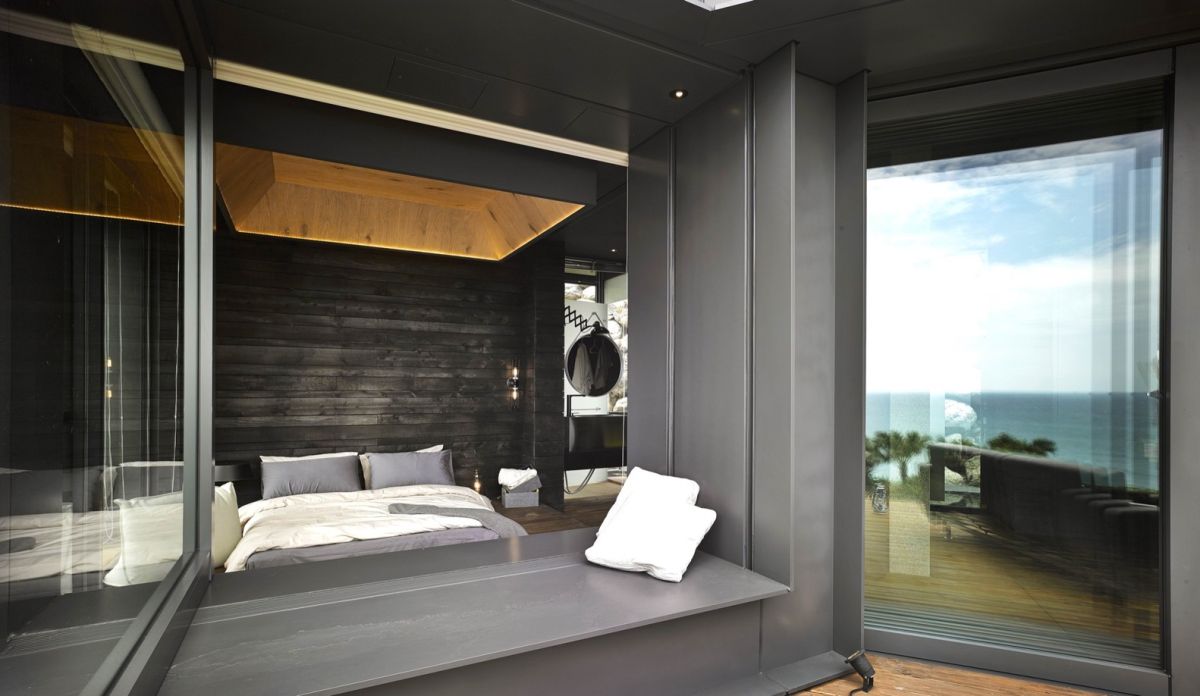 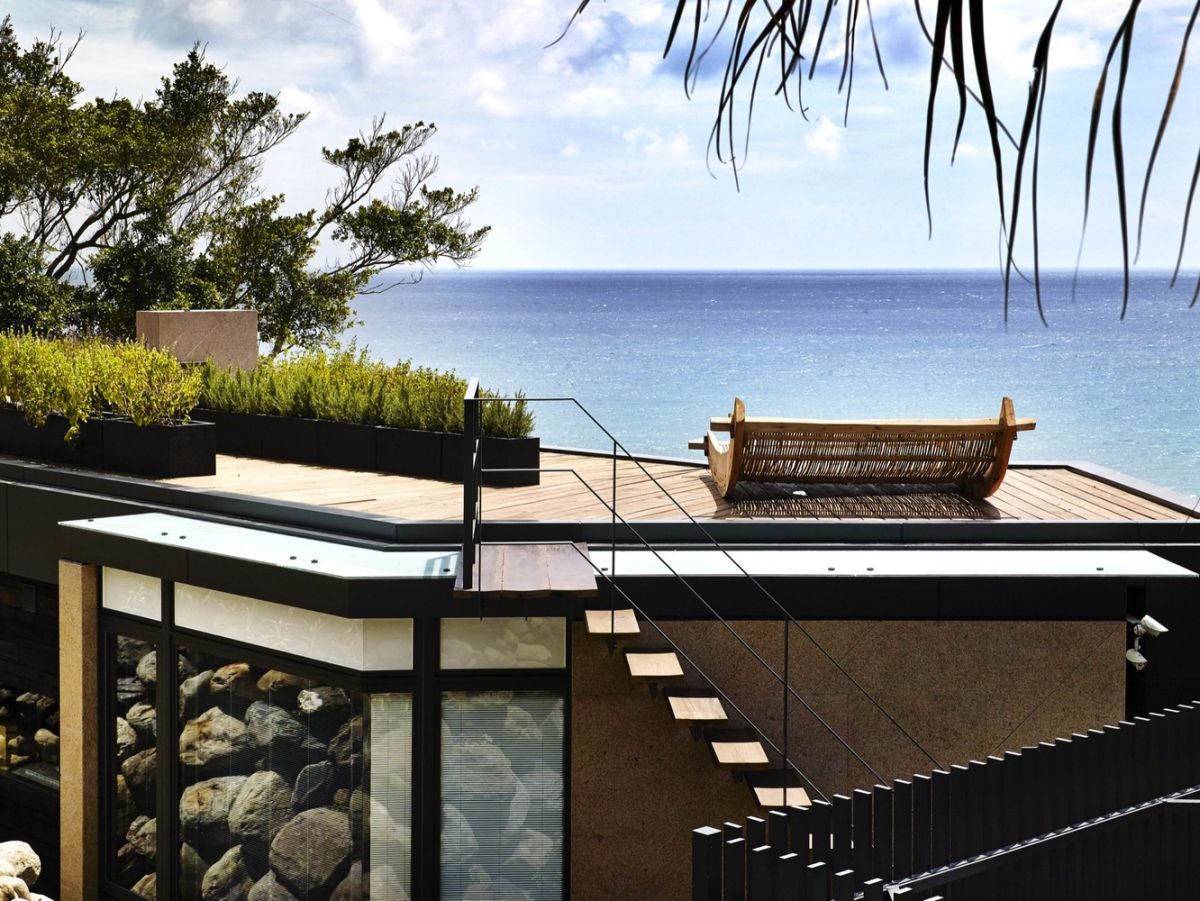 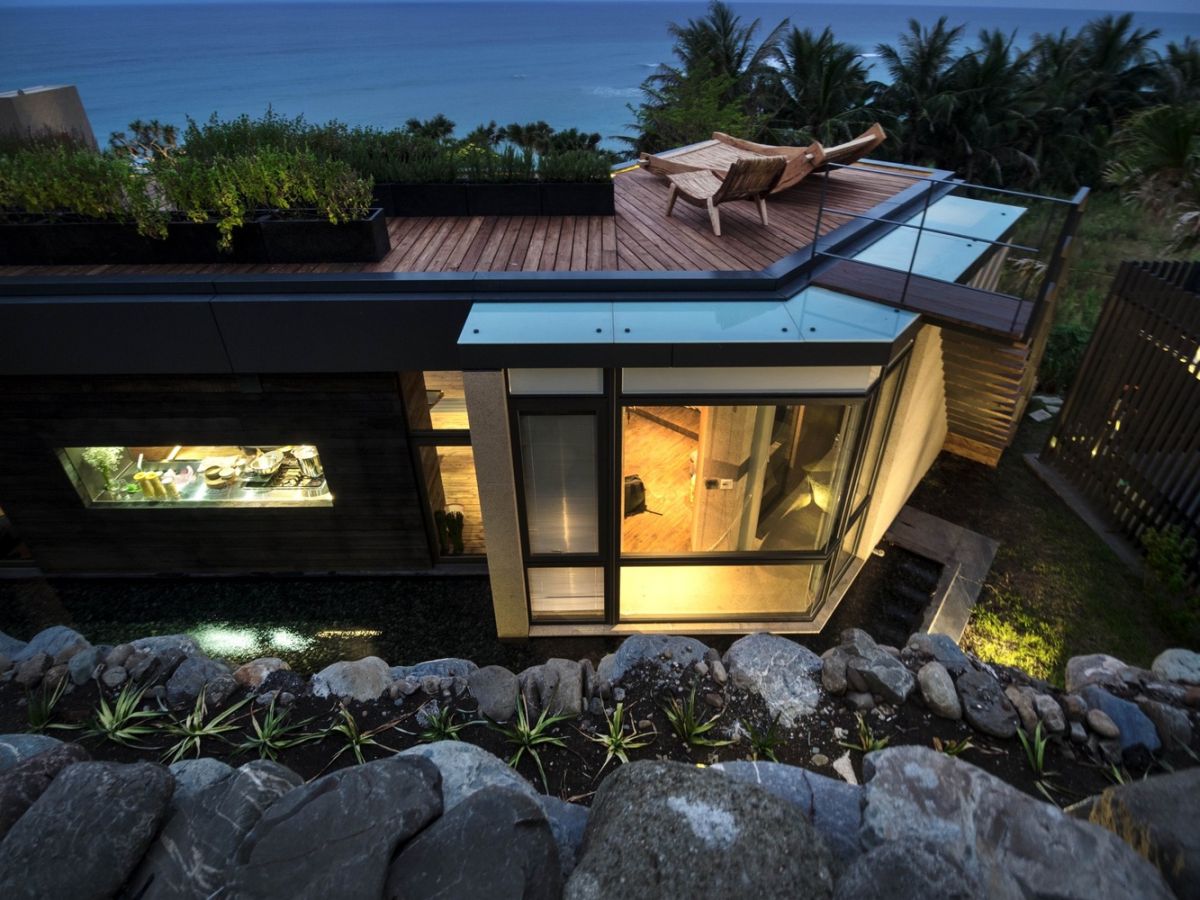 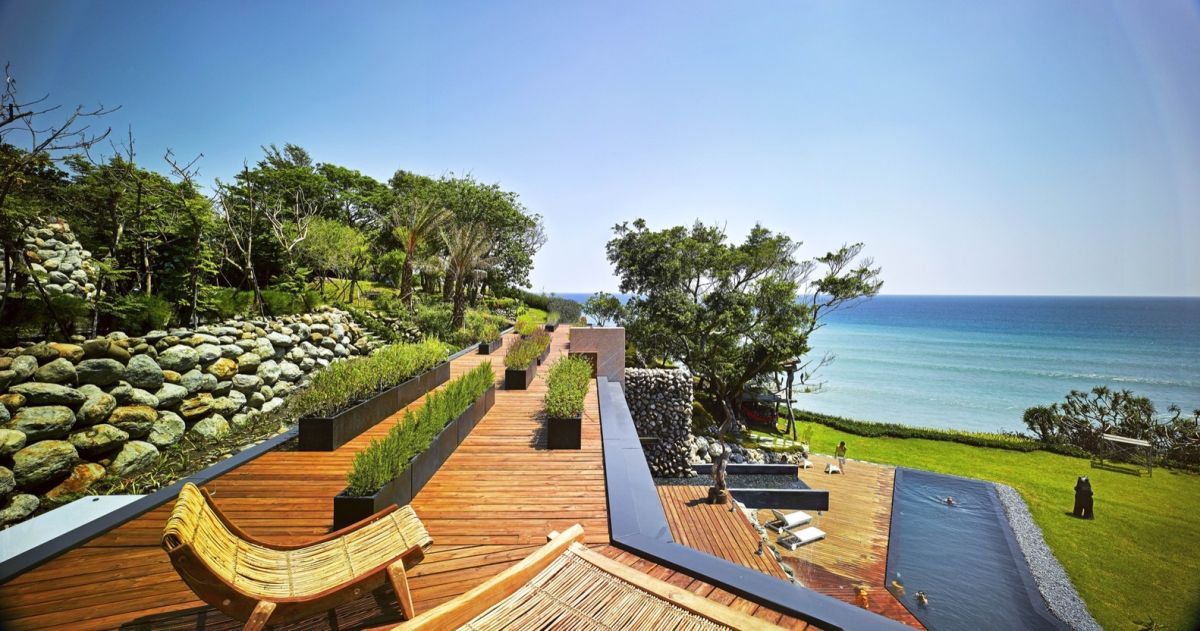 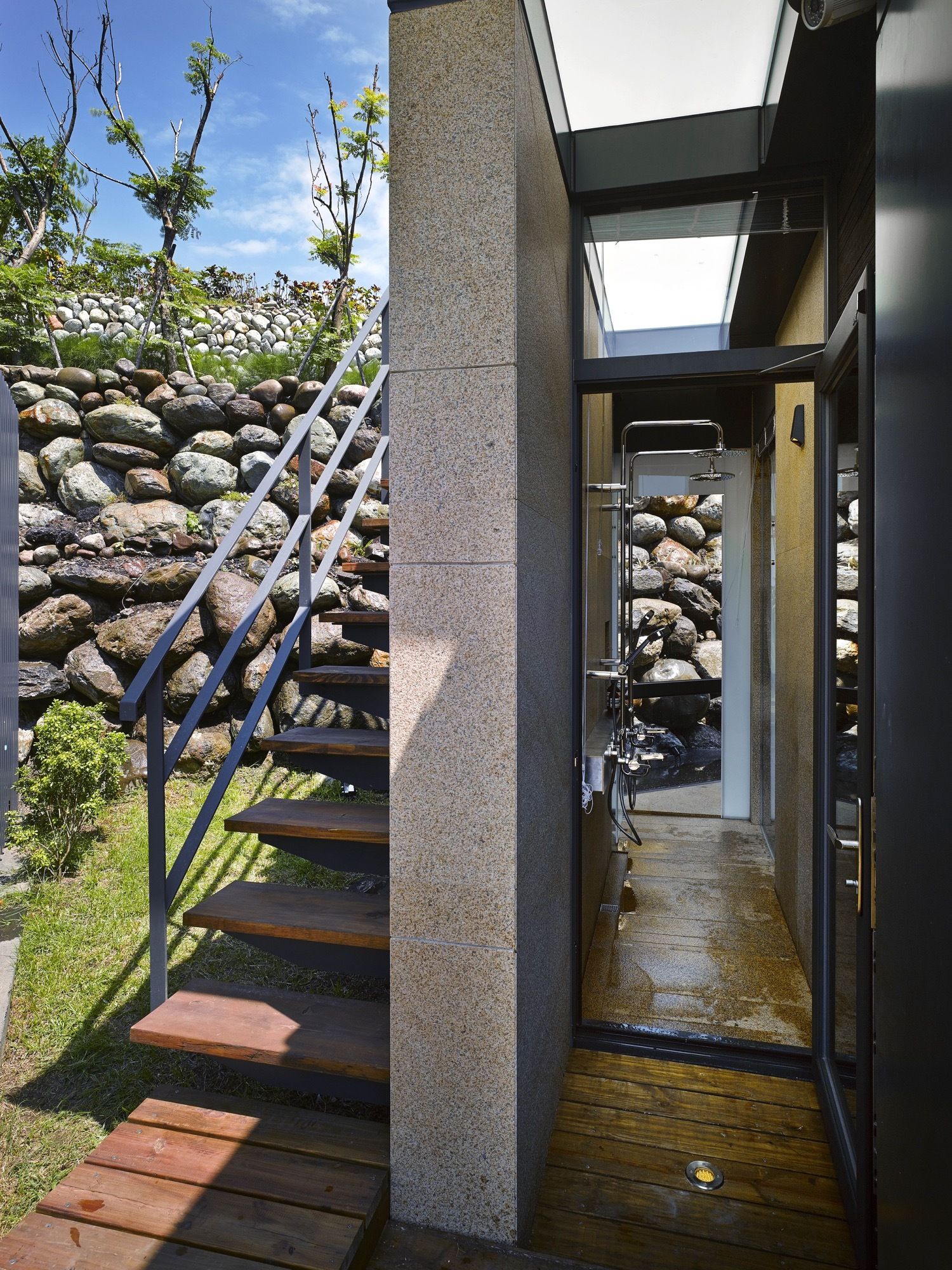 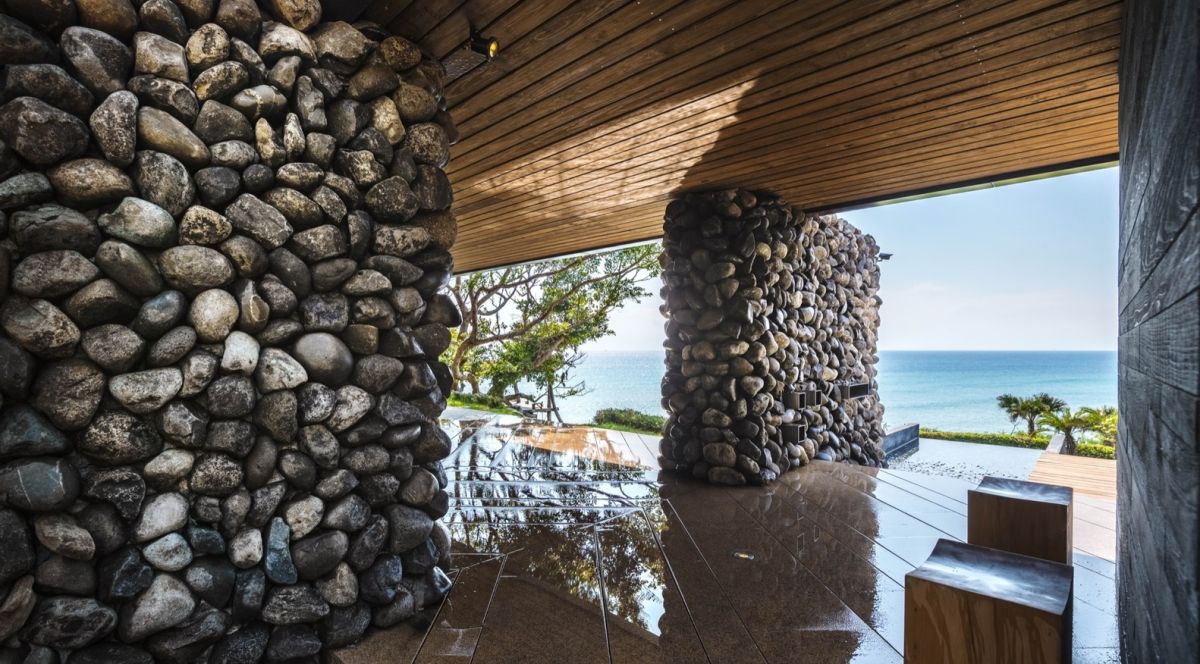 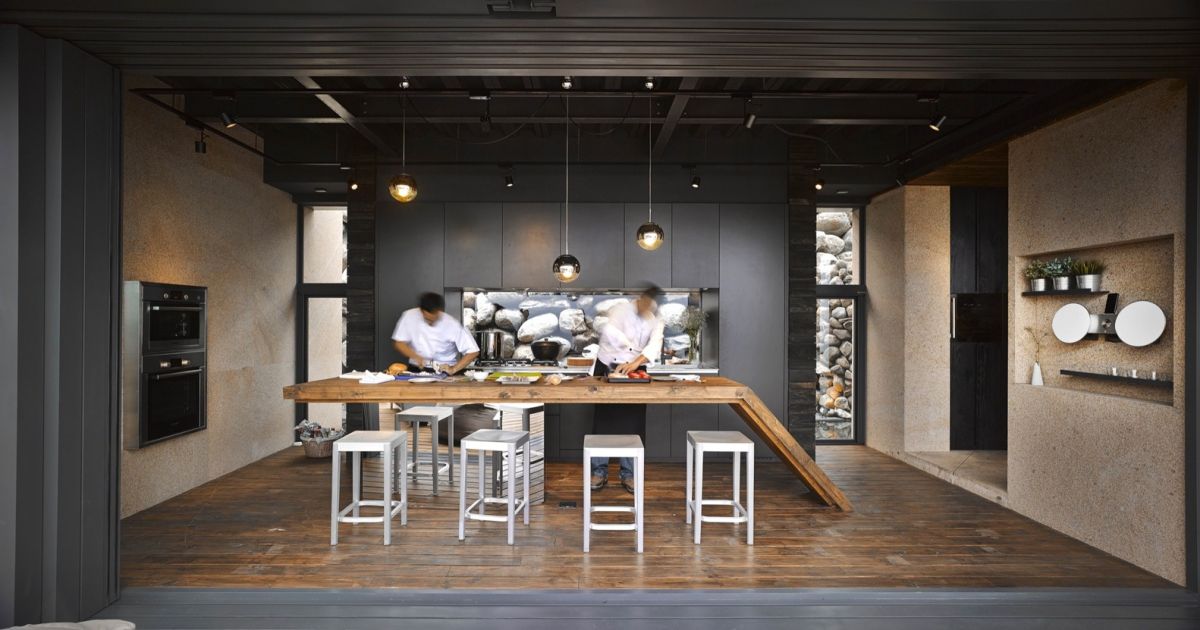 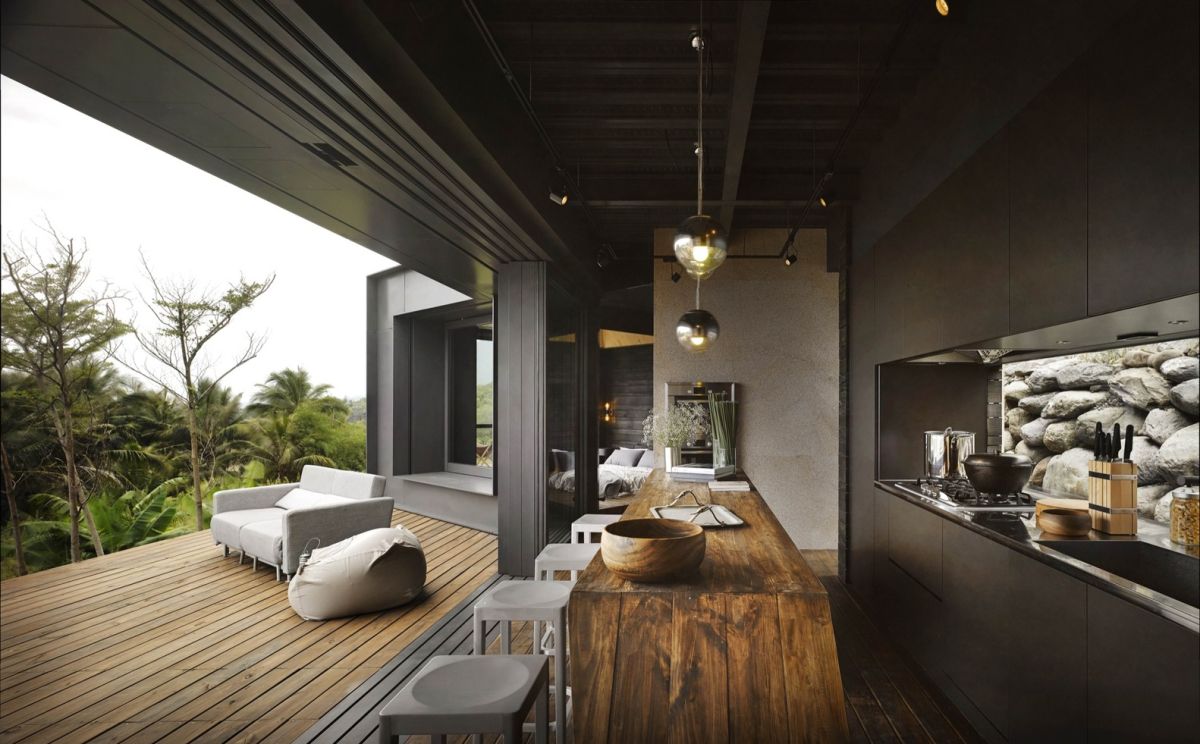 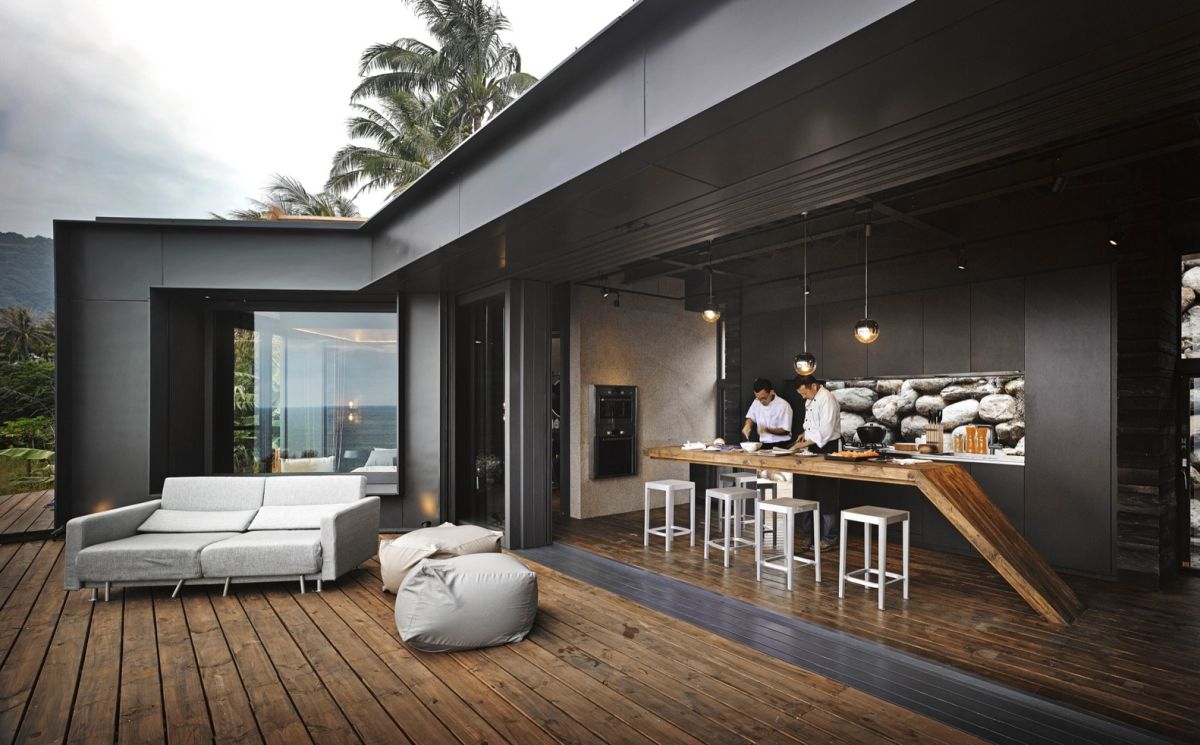 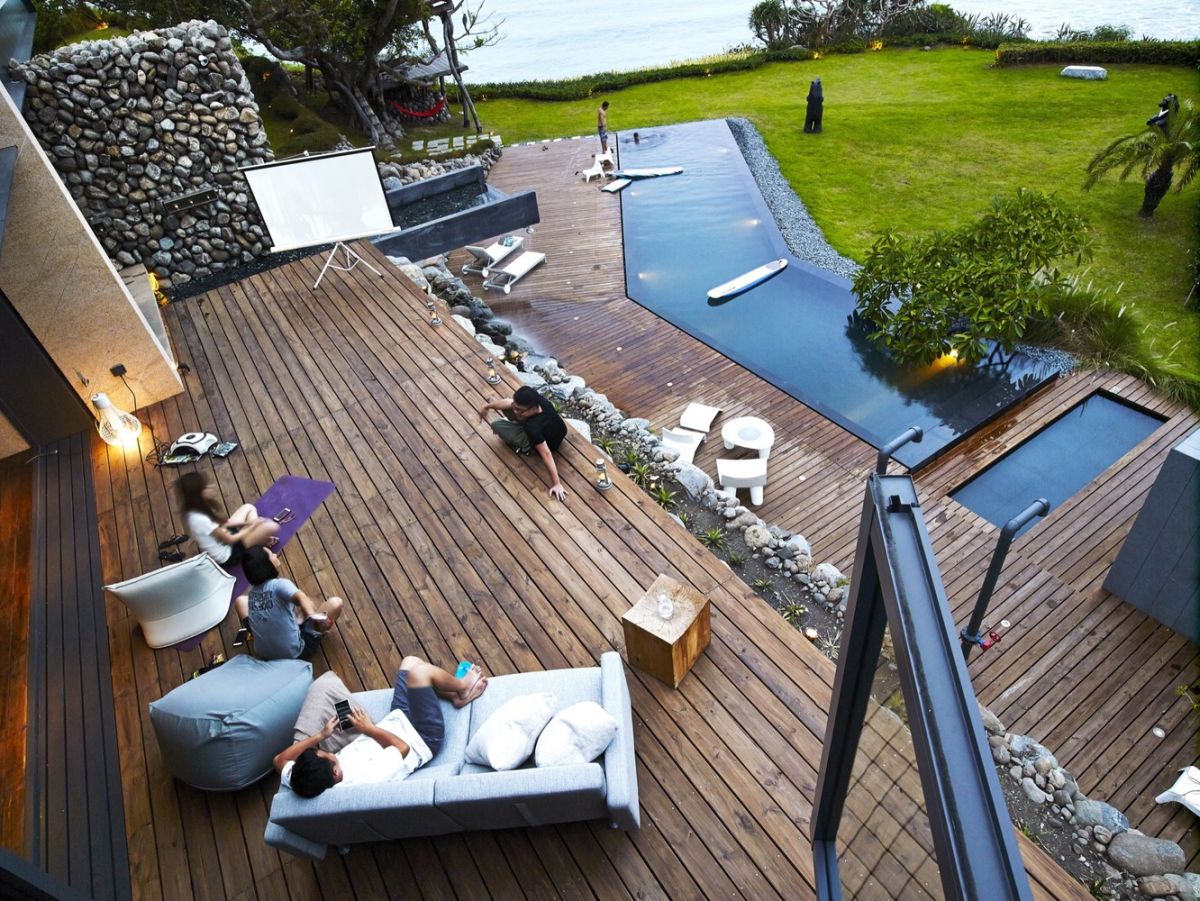 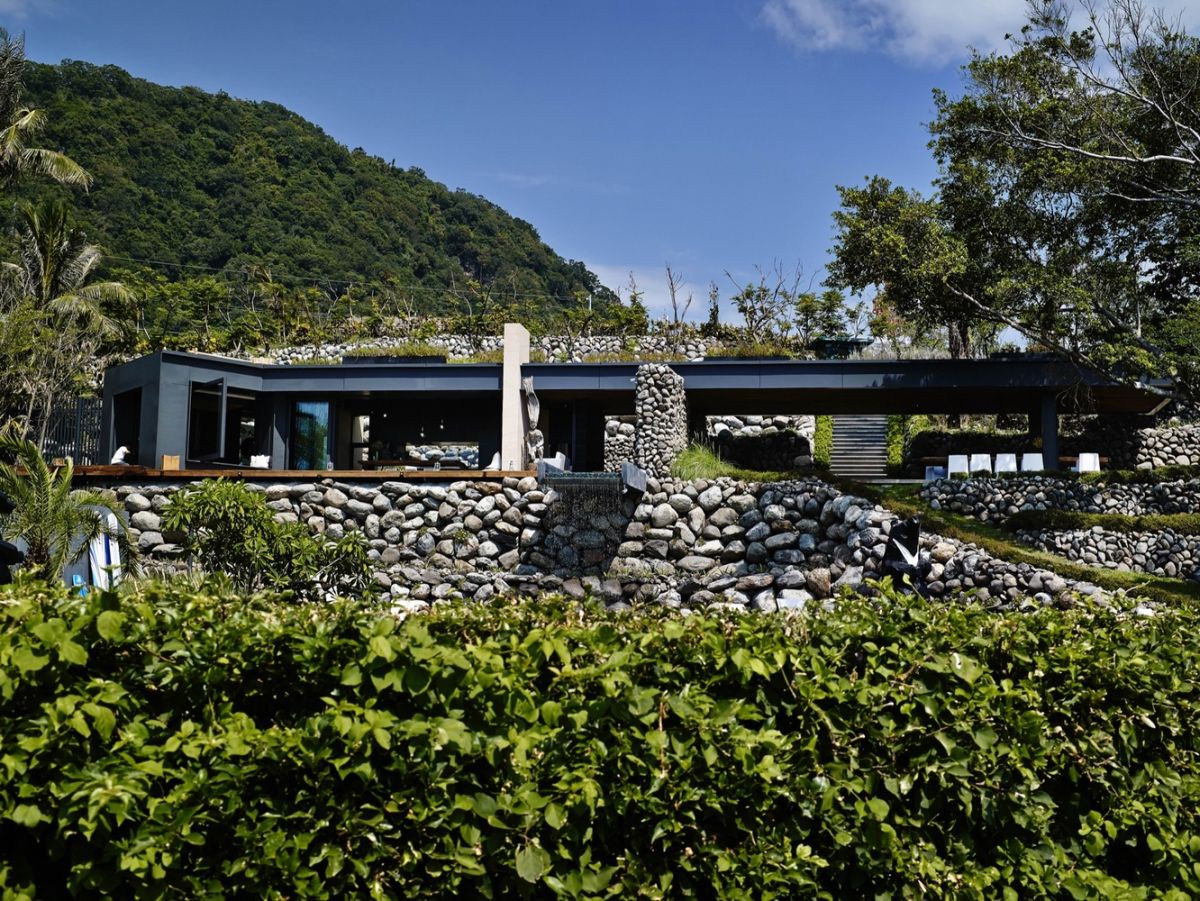 In the indigenous language of the of the East coast of Taiwan, the term “A’tolan” is used to describe a place with any rocks. In this case, it defines a house made of rocks. The A’tolan House is located in Taiwan and was built by Create + Think Design Studio in 2015.

The studio’s approach is to use their clients’ spatial perception and interpretation to offer them unique experiences. The team uses their professionalism to offer customized solutions which are efficient, cost-effective and satisfactory. Each project is unique and each raises a new set of challenges.

In this particular case, the challenge was to build a house on a narrow site measuring 90 meters in lengths and 30 meters in width. The site follows the coastline and descends into a downward slope. To deal with its particularities, the architects designed the house with three levels.

The distribution of the spaces is unusual both because of the site and the client’s requests. The top level includes the driveway/ parking area and the entrance and is at the same level as the front yard. The middle level contains the main functions of the house while the bottom floor has a pool and a tree house and is in continuation of the lawn.

The project focused on the use of traditional native architectural techniques which are specific to the concept that inspired this whole project. The rocks which have been excavated from the site were used to build the East and West walls.

The house has a steel frame mixed with rock cladding and a green roof covered with a variety of local herbs and plants. This combination of materials and building techniques was used in order to let the natural background hide the rest of the elements, making the house seem more like a garden or pavilion than an actual home.

The structure extends along the coastline and offers views of the sea at a 130 degree angle. In addition, it includes a variety of outdoor spaces and features meant to eliminate the traditional barrier between indoor and outdoor areas.

The interior is unusual for several reasons, one being the fact that the client decided to only include cooking and sleeping areas, completely eliminating the social spaces from the design. This was done in order to create a design that’s the least invasive on the surroundings with a minimal footprint as well as to establish a strong connection with the surroundings.

The interior spaces are defined by accordion glass doors. They let light and air flow through freely, establishing visual connections between the spaces. The symbiosis with the surrounding nature is also emphasized through a variety of other features.

The kitchen island sits on a mirrored pedestal which reflects the décor around it making the counter appear to be floating. At the same time, it embraces the view coming through the full height glass wall.

The kitchen opens onto a large wooden terrace which can be used as an outdoor living space. A wide stone stairway leads to an open air foyer. To the side of this space, an Al fresco dining area was created.

Next to the bedroom is the bathroom which opens up to a reflective pebble pond at the back, an area which is both open and private at the same time.

An infinity pool was placed at the bottom level, next to what we previously called a tree house. Even from down here the views are exquisite.