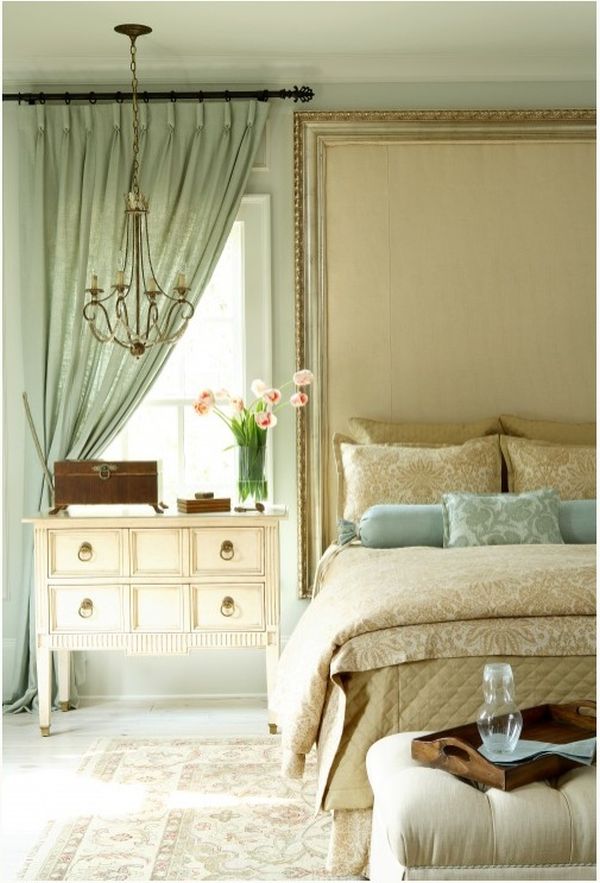 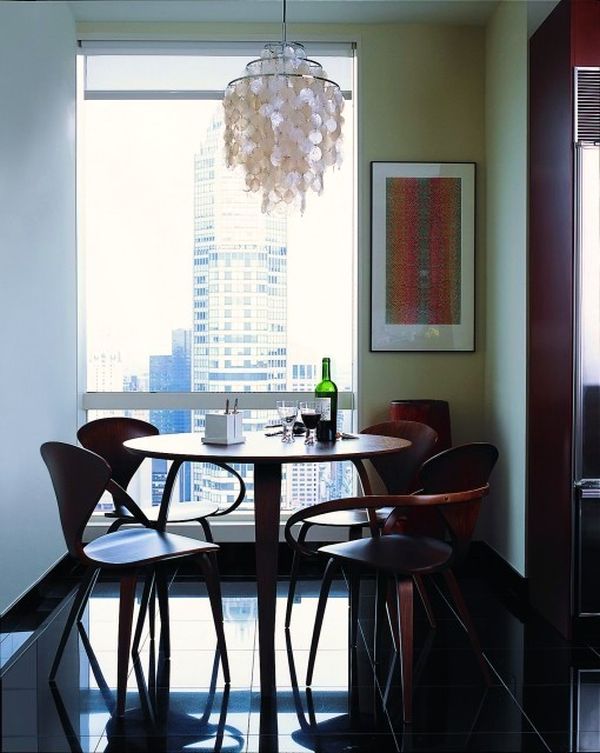 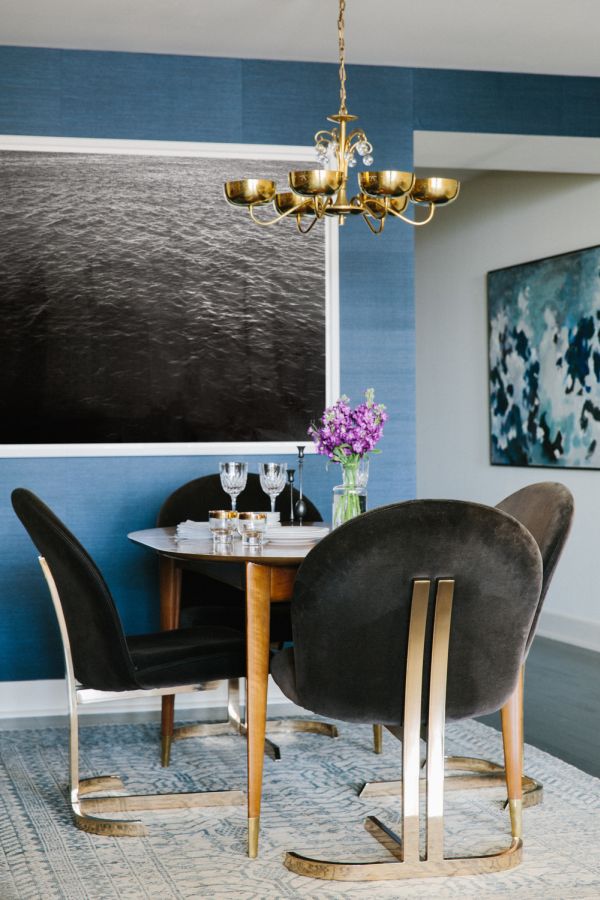 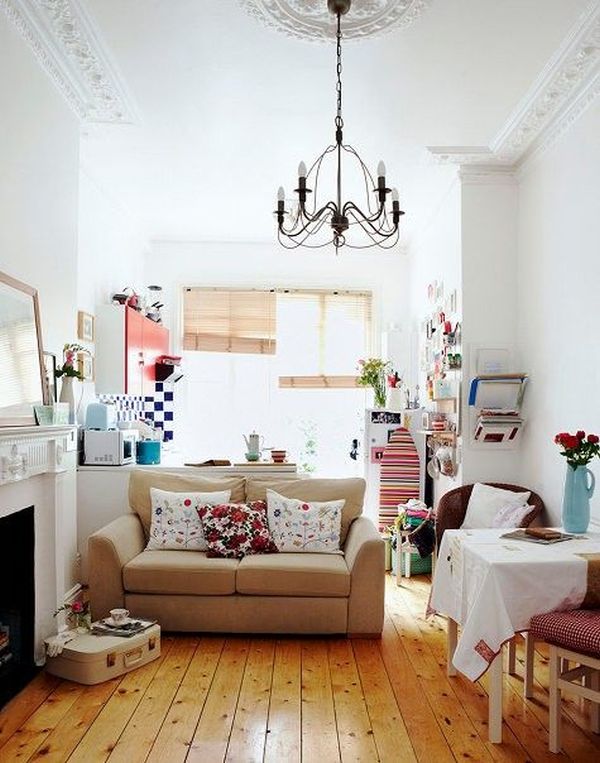 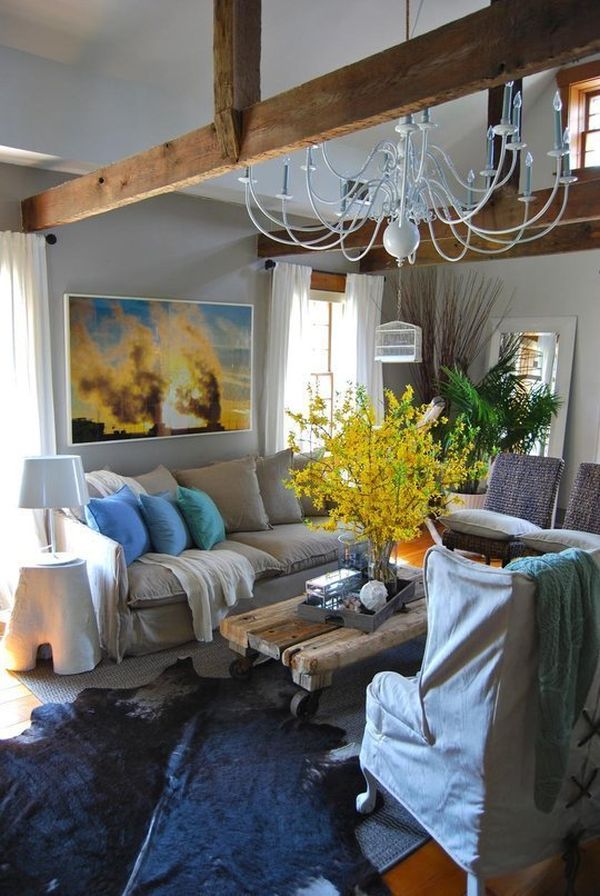 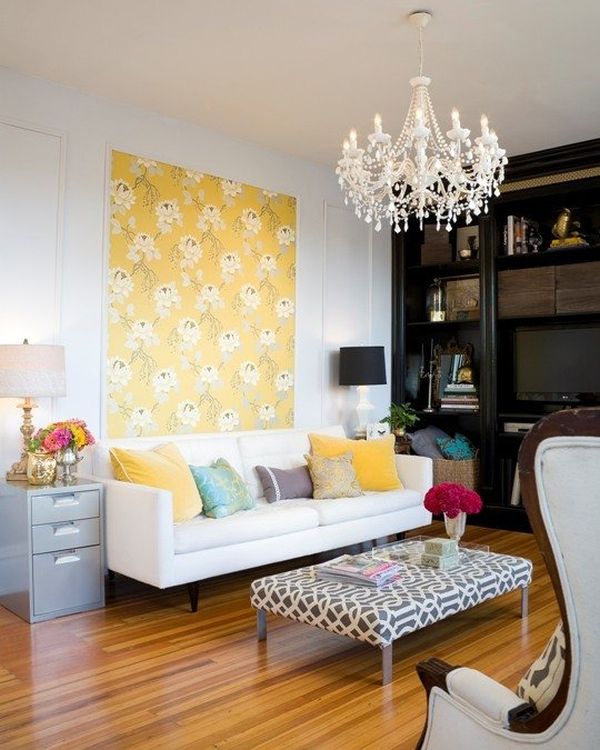 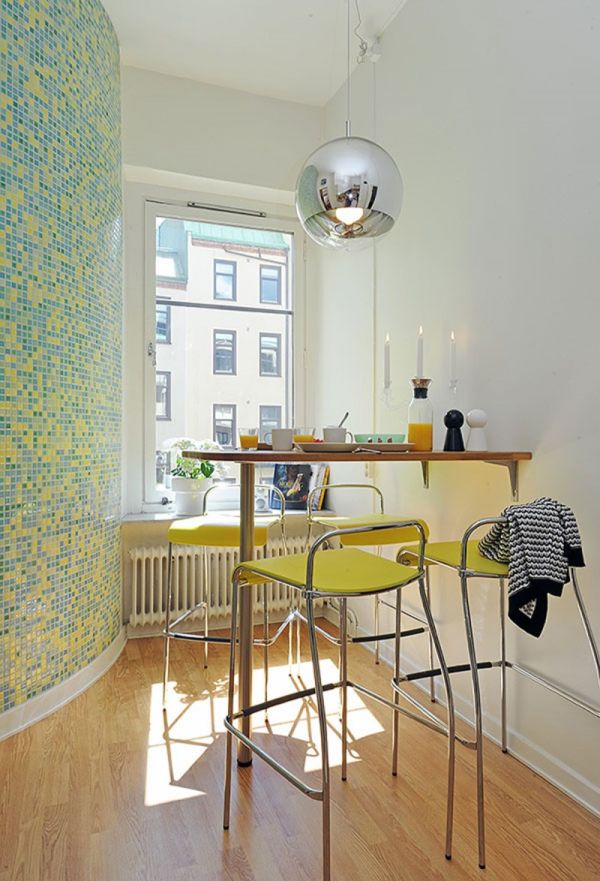 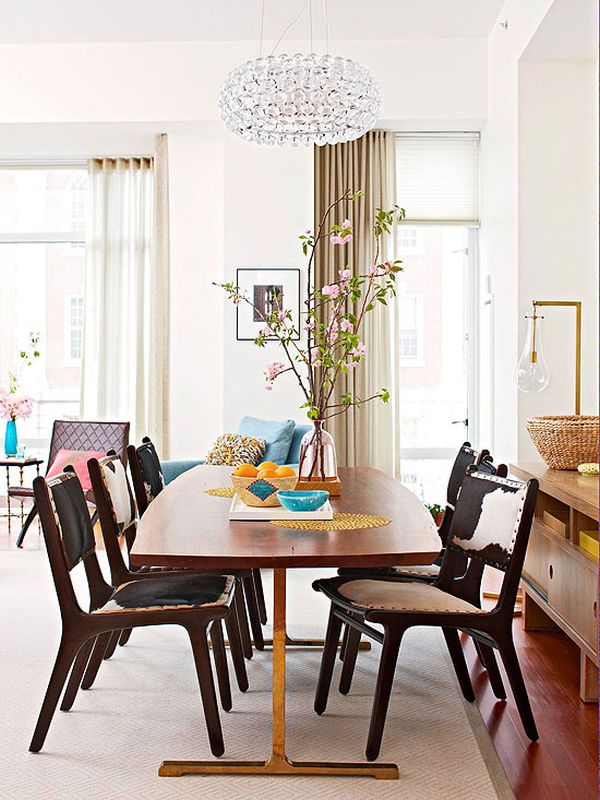 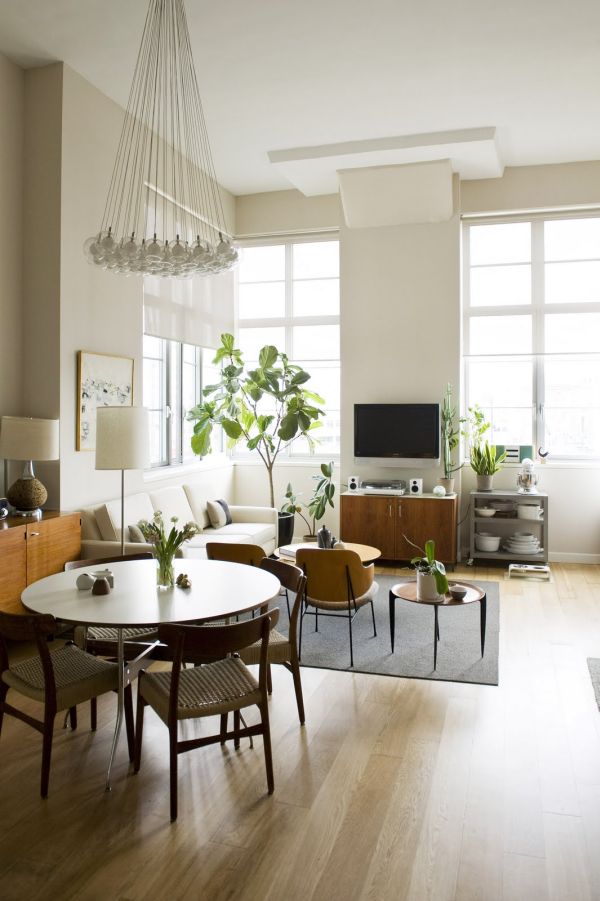 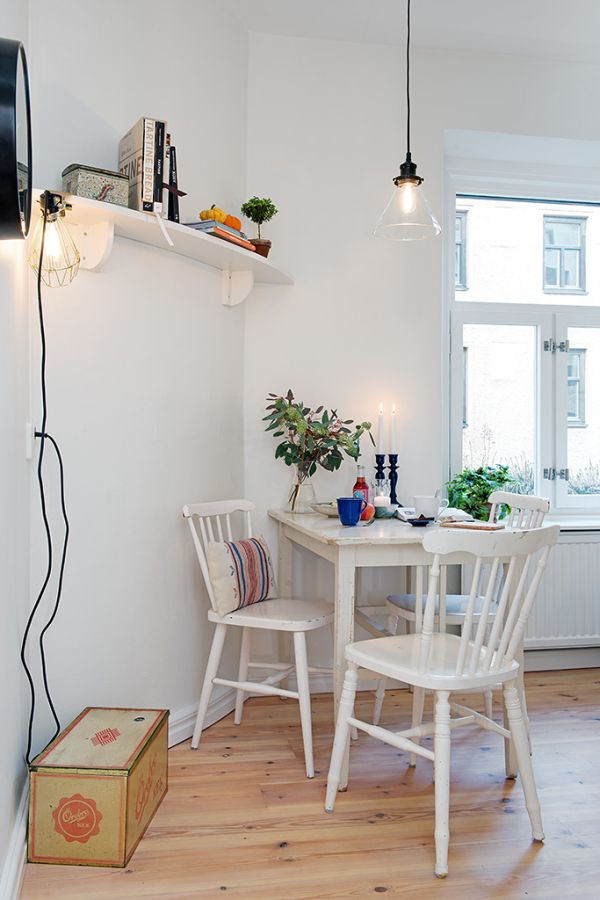 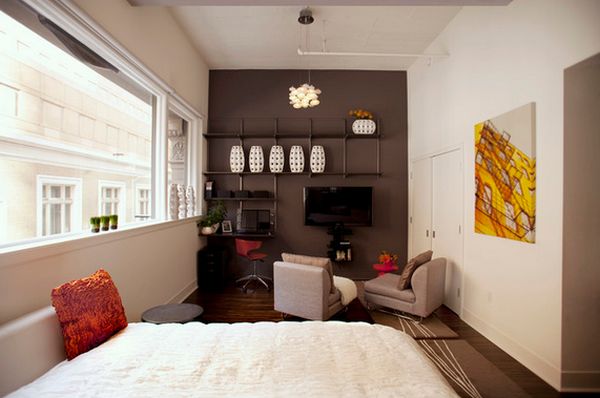 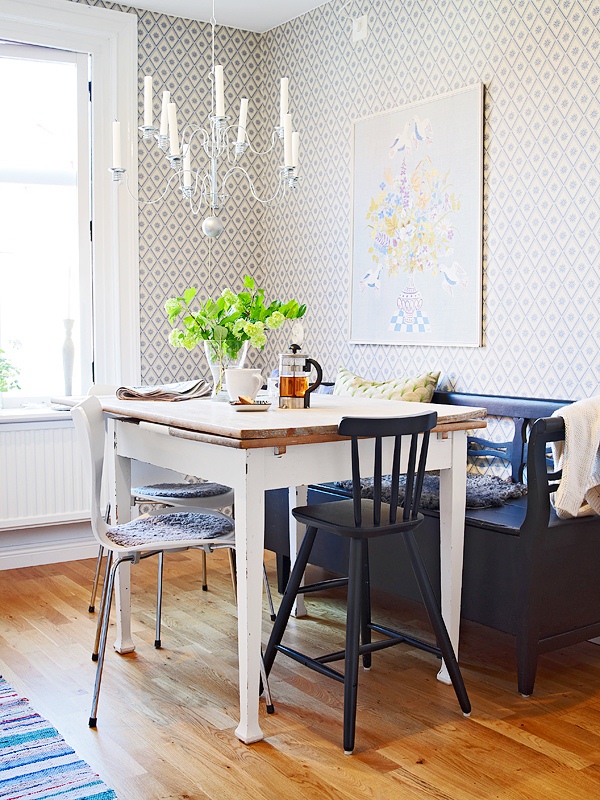 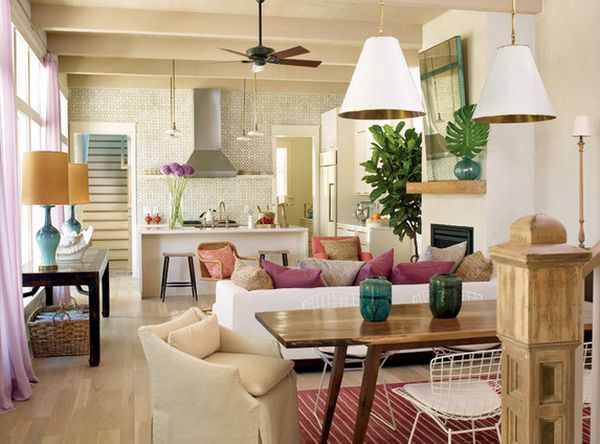 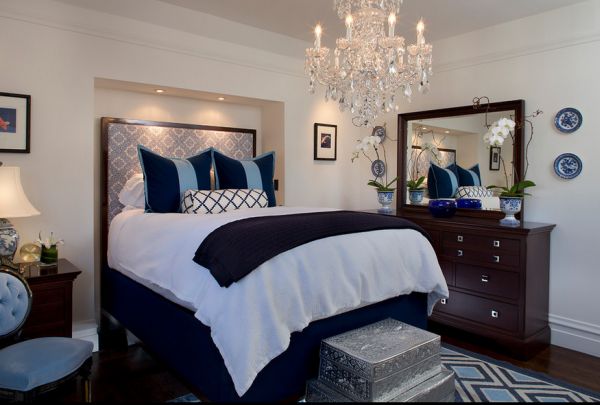 For those who live in small apartments (“small” is of course relative – 500 square feet might seem almost luxurious in popular East Coast urban dwellings, where 2,000 square feet might feel a bit cramped to those used to more elbow room in the West), one consensus is probably universal: space is prime.

Not only do pieces within a small apartment need to be hard-working in function, but they also need to double as representations of style because, let’s face it, there’s not a lot of extra room to make up the difference should a discrepancy arise.

Here are several small spaces in which chandeliers play a key role in defining or highlighting the apartment’s unique style while still providing what a chandelier is meant for: functional light.
Just because a space is traditionally small and casual (like this corner dining space) doesn’t mean it can’t benefit from being dressed up and accentuated with a chandelier. This all-white flowing one is the perfect balance of making a statement with simple dignity.
Living doesn’t get more compact (and, forcibly, well-edited) than when it’s restrained to an urban studio apartment in which sleeping, eating, working, and relaxing must all take place. Thus, a gorgeous chandelier is an ideal choice for providing functional light and doubling as a sculptural piece.
Scandinavian style is known for its bright-white simplicity. Wooden floors ground this white space, but as the virtually only “color” in the space, the floors require a balancing element. A simple clear-glass funnel pendant chandelier over the small dining table provides an understated element of style, while the black base and cord inherently draw the eye upward.
Chandeliers can define a space just as efficiently and effectively as an area rug or furniture placement. In a small apartment where open concept floor plans are the norm, it can be overwhelming to incorporate an area rug as the defining feature of each of the room’s components. Thus, a stunning chandelier does double-duty in marking out the dining area and providing an inarguably chic sense of style in this hard-working small square footage room.
If the primary pieces in your small apartment are muted earth tones or of natural wood, it’s never a bad idea to add in some glitz and glamour with a sparkly chandelier. This contrast is both aesthetically appealing, but it also provides a statement piece and adds instant drama and sparkle to even the smallest spaces.
For the tiny eat-in nook in an oddly-shaped corner, this silver orb pendant chandelier is a charmingly bright, stable element. Round edges in a space such as this ensures the chandelier needn’t try to align with any one wall, thus giving a subliminal importance to every angle and wall.
Go big or go home! Even in the smallest apartment spaces, an oversized chandelier just might be the ticket to making the space feel grander and more importantly spacious than it really is. Plenty of sparkle and shine at or above eye-level takes the ceilings up visually and helps us to appreciate the full (albeit tiny) room under a lighting umbrella of style.
Although the actual square footage is not much to brag about in this cozy living space, the ceilings are extremely high. Chunky wood beams bring the feel of the vaulted ceilings down a notch, but it’s the large-in-diameter yet fairly spindly chandelier that really establishes the intimate feeling in this small apartment. Furnishings are casual and friendly, which is why a more formal chandelier is an excellent choice in balance and form.

An elegant chandelier brings immediate presence to the all-white space that would otherwise visually disappear in this charmingly eclectic and colorful living room.

Small apartments are prime candidates for deep, rich color on the walls. It’s because of the smaller size of the space that the use of such color isn’t overwhelming; rather, it’s inspiring and cozy. In such an instance, a metallic chandelier might be just the thing – it provides sufficient shine, whether the light itself is on or off, to brighten the closed-in space, and details the upper third visual plane.
A tiered capiz shell chandelier provides a lovely lightening touch to a dark wood dining setting. It manages a commanding presence in a small, enclosed space without competing with a spectacular view.
For the apartment bedroom that finds itself tight on horizontal space (the nightstand here doubles as a vanity and dresser), a chandelier-as-bedside-lamp is a creative solution. Of course, it could be very tight, space-wise, in this particular bedroom, but with a ceiling-height headboard and elegant color palette, this room exudes nothing but spacious luxury. I think the chandelier plays a huge role in that vibe.