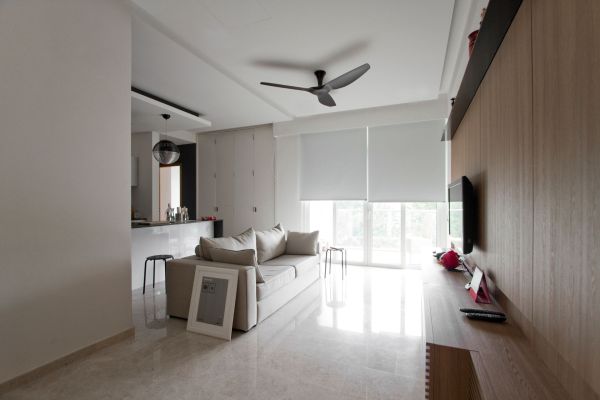 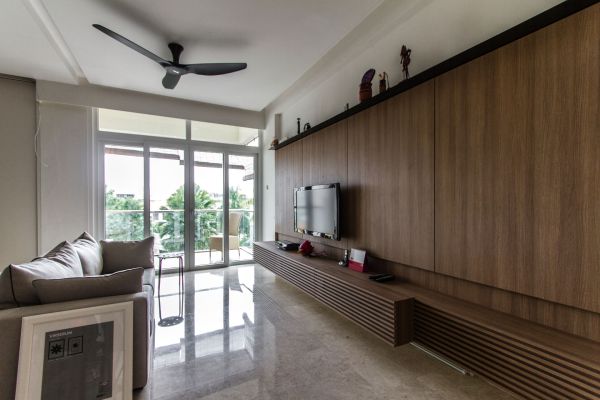 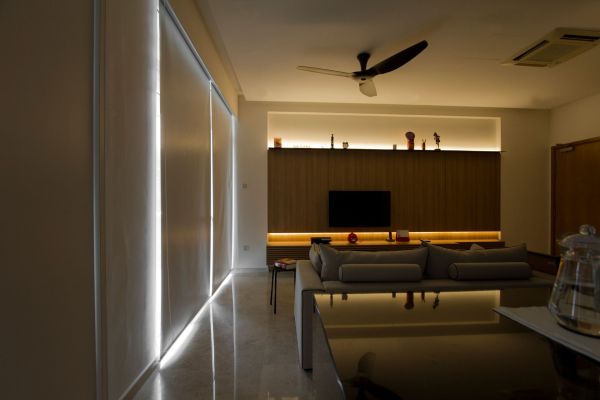 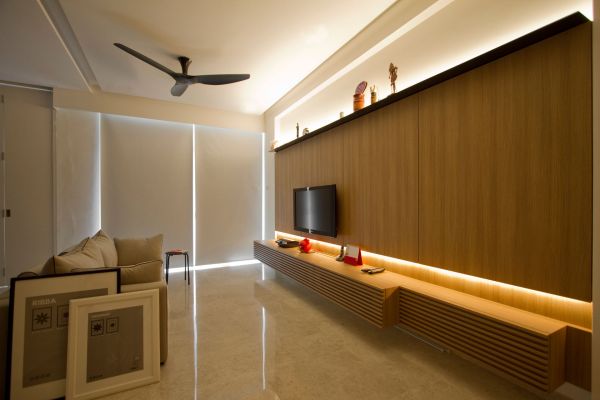 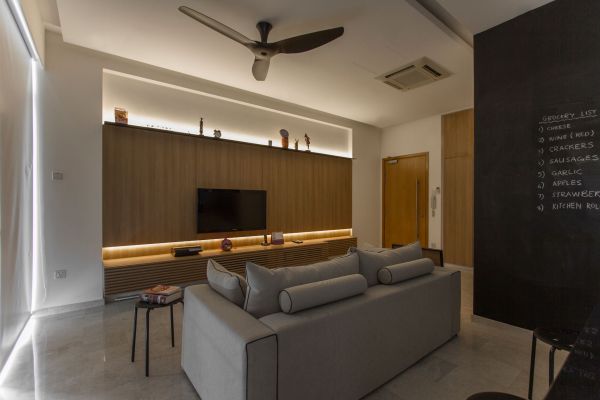 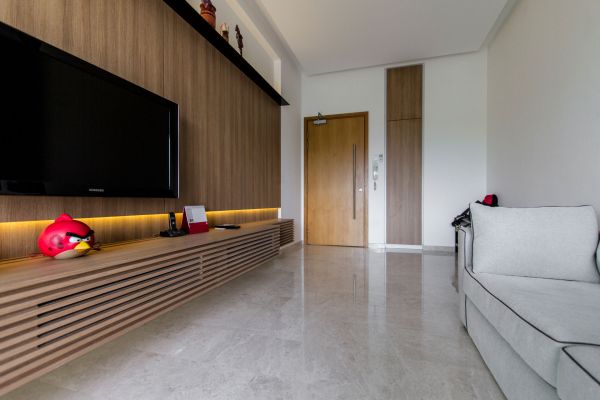 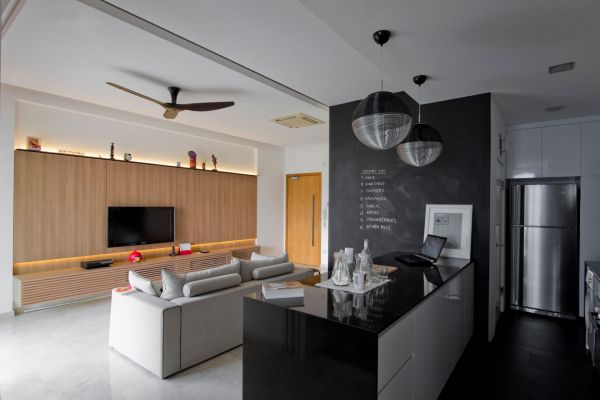 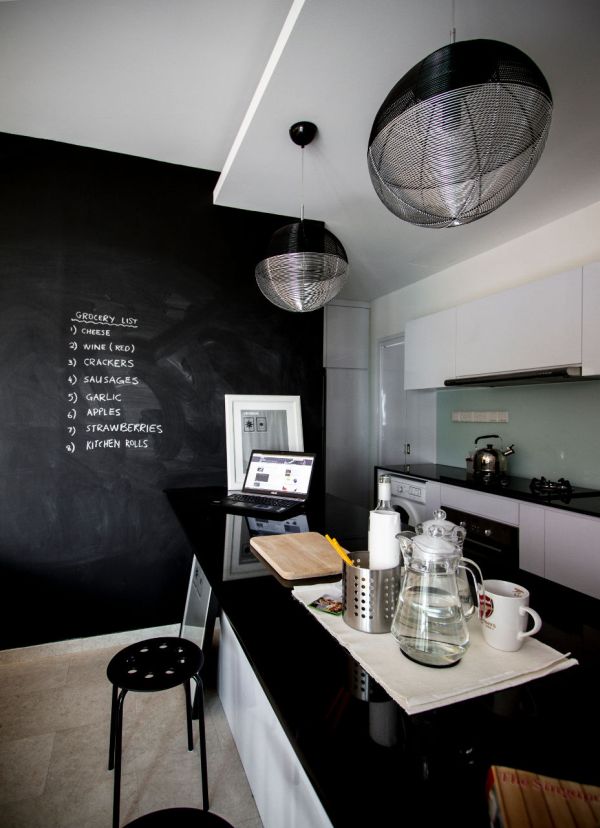 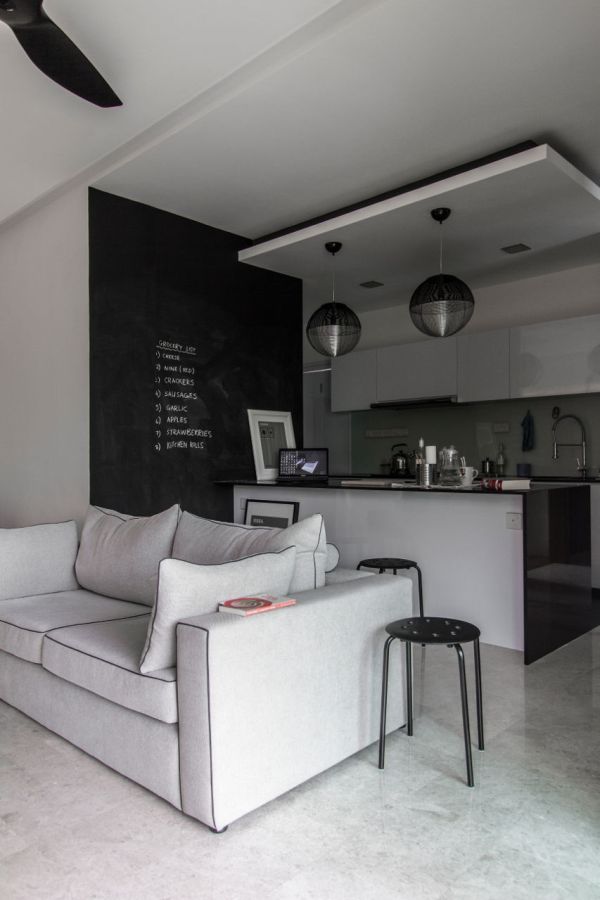 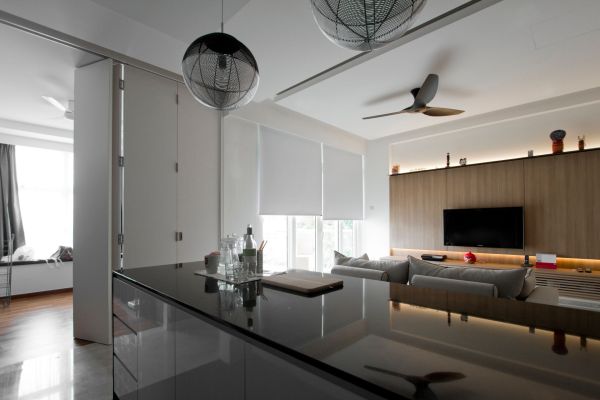 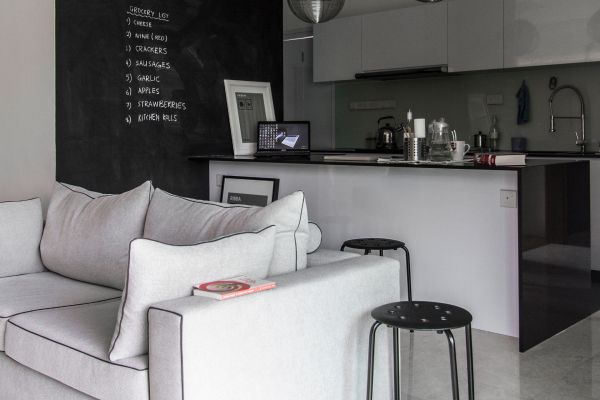 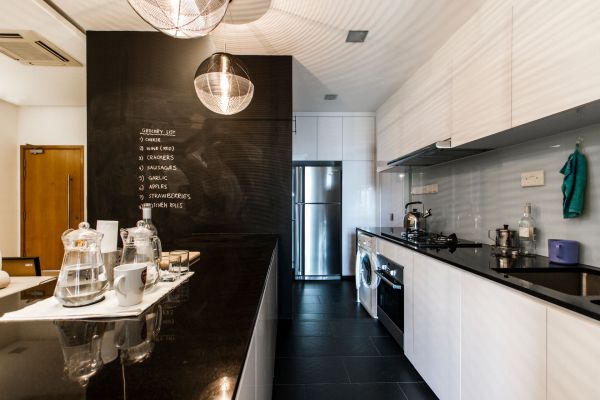 In Singapore, there is a gorgeous contemporary apartment called the Geranium Apartment. Dialing in at about 1,000 square feet, the apartment isn’t huge compared to some, but its design makes the space feel and look much larger than that.

The apartment’s main living area is lucky enough to have lots of natural light – floor-to-ceiling windows, in fact. This natural light plays a key role in opening up the entire apartment and providing a spacious feeling throughout.
When the light gets too harsh, however, or a warmer feeling is desired, some white pull-down shades block out the sun while maintaining a sleek, modern look across the white walls in an almost seamless transition.
A polished light-neutral floor reflects light from everywhere, adding depth and contrast at any level of dimness or brightness. This is a beautiful contrast to the matte white walls and plays off the strategically placed backlights.

Architectural details abound in this small space, although all are so clean and well-integrated into the space that they are perfectly at home. Notice how the proportions are kept consistent throughout – the top of the feature wall aligns perfectly with the top of the front door, for example.

The vertical wood grain on the primary wall paneling serves to not only warm up the room, but it also helps to add visual presence to a minimalist space. Perpendicular lines along the built-in floating “entertainment center” are a stunning contrasting detail.
A minimalist design, perhaps more than any other style, requires all aspects to be well-planned and multifunctional. The chalkboard wall, separating the kitchen from the living space, is one such example of a single component serving multiple purposes.
The chalkboard is functional (hello, menu and/or grocery list at the ready), it’s visual (adding depth with its blackness and tying in the space’s other black details), and it’s unique, especially in a contemporary apartment where surfaces tend to lean toward the shinier end of the spectrum. 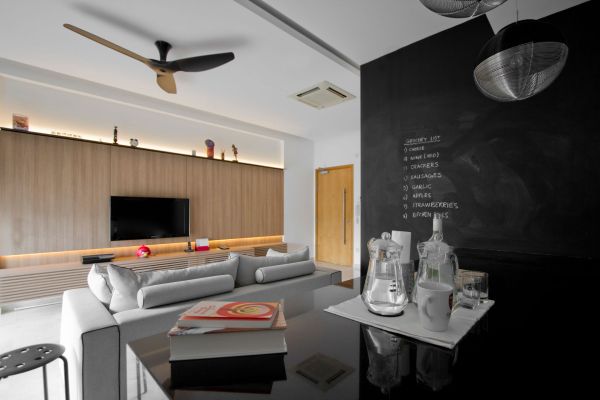 What’s more, the whole-wall-as-chalkboard technique provides a distinct visual separation from each space’s functionality without using up any square footage. That is smart design.

Wire orb pendant lights over the kitchen peninsula bridge the gap between industrial and modern lighting. As spheres, they also provide some geometric contrast to a space where clean-cut 90-degree angles reign supreme.
A folding door (that runs floor-to-ceiling and is disguised as just another part of the wall, to a casual observer) opens up into the apartment’s bedroom space right off the kitchen.
Of course, furnishings play a critical role in the vibe of the apartment overall, and the primary piece – the sofa – was designed to perfection here. A pale linen-y upholstery with black contrast piping sums up the entire apartment. And black backless bar stools provide a low-key yet chic counterpoint.
The elements of natural with modern are combined so well in this space. Home sweet home.