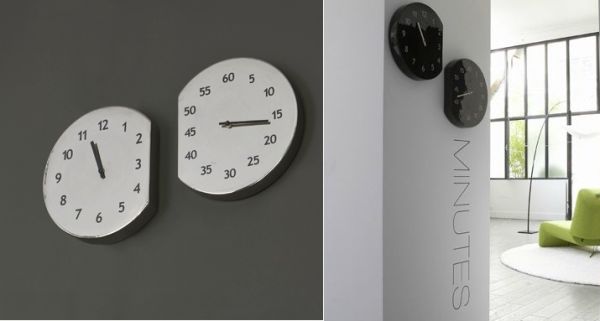 When you tell the time you usually use an expression that is made of two parts: one tells the hour and the other part the number of minutes. That is why any watch or clock has two different arms and people agreed to use the small arm for hours and the long arm for minutes. Depending on the arm you are watching you count the number of hours and minutes, so you make two interpretations at the same time on the same dial. Any way, some great designers thought it would be a lot easier and more fair to use two dials instead of one. So you can see a very unusual clock with two dials.

One of them shows only the hours, so all the numbers displayed range between 0 and 12 and the other dial shows the minutes, so the numbers displayed go from five to five from 0 to 60 – the number of minutes in an hour. It is an unusual concept, but it is rather fair and the design of the two dials suggests that they are actually halves of the whole. This is the Espace Temps Wall Clock. You can find this item on Ligne Roset web site and it is available in black for $455 and in platinum for $670.