The latest trend in bathroom showers is the Cocoon Egg Shower Concept by Arina Komarova. This future shower concept is not only a shower, but also a bathtub and hydro massager. For the moment it’s just a concept and it can’t be purchased right now. But hopefully it will soon be produced and you’ll be able to enjoy it.

It’s a really interesting concept. The idea at the base of this structure is quite simple, being inspired by the egg shape. It’s one of the most common forms, but not when it comes to furniture. The lines are fine and soft and the approach is a modern one. 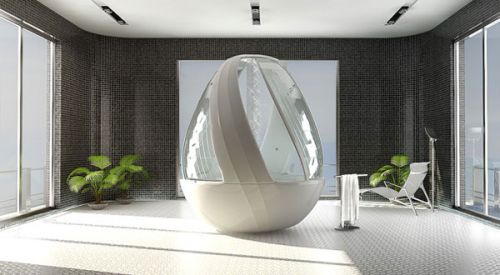 Not only that this piece has a very original shape and a contemporary look but the aesthetic part is not the only one which is impressing about it. It also has the option of turning into a bathtub and a hydro massager. Who wouldn’t like that? But like all good things in life, this one is not accessible. At least not for now, because it’s still a concept. I’m not sure that when and if it will be produced and it will purchasable, a lot of people will afford it, because it will probably be expensive. But if you do have the financial possibilities, it would be stupid not to have one of these.